With a city full of historical and cultural heritage, we tried to integrate and extend the city’s unique characteristics into the space from a perspective of respecting the spirit of the site... 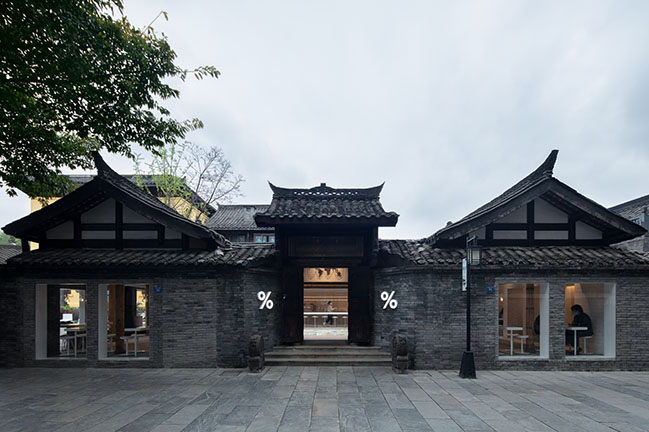 From the architect: First built during the Qing Dynasty’s Kangxi period in Chengdu, China, Kuanzhai Alley mainly consists of three northwest-southeast streets, which are connected by lots of small alleys in a crisscrossed pattern. During the early stage of the Republic of China period, among the three main streets, the wider street was named “Kuan Alley” (Wide Alley), the narrower street was named “Zhai Alley” (Narrow Alley), and the one with a well was named “Jing Alley” (Well Alley). This is how the Kuanzhai Alley got its name. 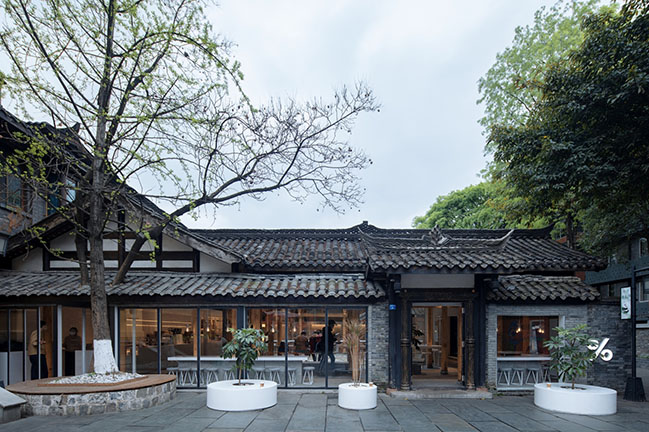 As a historical and cultural landmark in Chengdu, Kuanzhai Alley is a renowned busy commercial and cultural area. While Jing Alley features relatively peaceful and tranquil atmosphere in the midst of noise and bustle because it has shops only on one side and a street wall on the other. 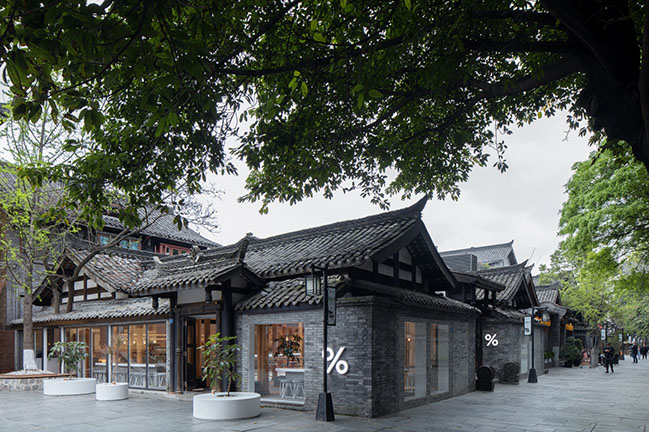 Sits next to a small square in the middle of Jing Alley, the project site is a traditional western-Sichuan residential architecture. The one-entry courtyard house has originally a main room with a courtyard and surrounding rooms on the two sides.

The south and west sides of the architecture are featured with traditional wooden storefronts, respectively facing to Jing Alley and the square. The traditional architecture with grey bricks and black roof tiles is plain and elegant, reflecting the memories of the city of Chengdu. Today, a lot of natives still live around the Jing Alley, which helps the area maintain an authentic Chengdu lifestyle.

Design concept
With a city full of historical and cultural heritage, we tried to integrate and extend the city’s unique characteristics into the space from a perspective of respecting the spirit of the site. The atmosphere of Kuanzhai Alley and the relaxed pace of life in Chengdu both have an impact on our design. 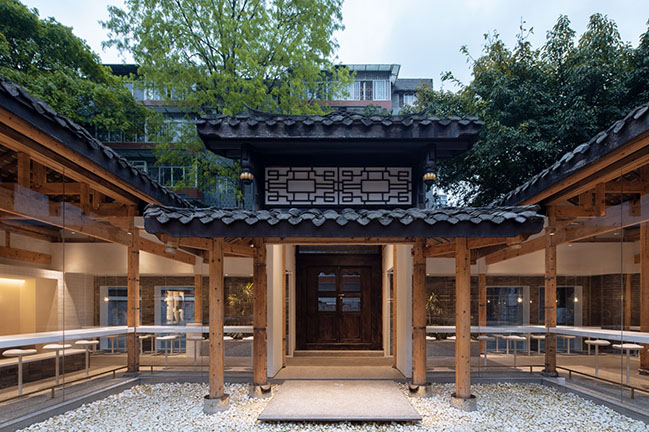 The philosophy of % Arabica is to “see the world through coffee,” which corresponds to our design philosophy. We believe that a café provides more than just a drink, more significantly, coffee provides opportunities for people to gather, communicate, and to fully experience the local urban culture. We hope the café to become a public space like a small neighborhood where people can either stroll or stay for a while and where people feel comfortable to walk and communicate. By extending the vibrant living and cultural atmosphere of the alley into the café, we renovated the site to make it a dynamic public space that provides a rich and solid spatial experience. Therefore, the café space is presenting the unique brand style while embodying the city spirit. 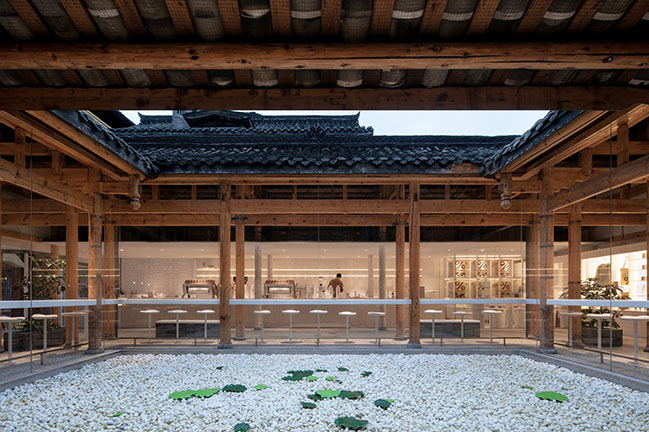 Spatial characteristic
When we first visited the site, we decided to remove the glass roof in the atrium area, which was latterly added by the previous owner, in order to help the architecture to restore its original layout of three sides of houses and an enclosed inner courtyard. Primarily, it sets the foundation for the overall spatial design. Meanwhile, we also chose to polish off the black paint on the surface of the columns to show the authentic color and texture of the timber, and partially reinforce the original timber structure by combining steel structure. 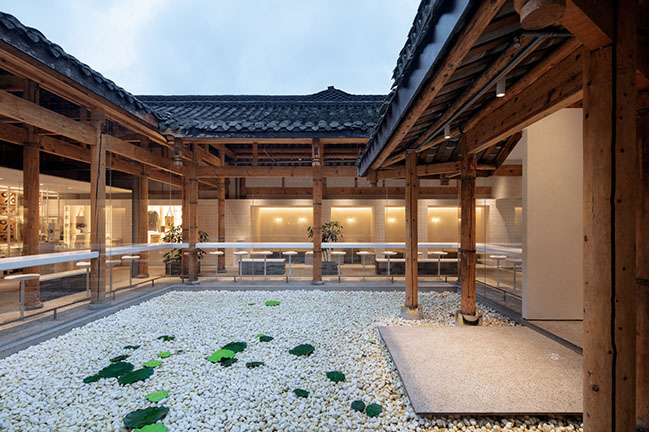 After the building returned to its original layout, we transformed the entire courtyard into a simple and modern white pool. People enter through the main entrance and the calm water sits right in front of them, inviting the guests to instantly get rid of the busy urban life and thus dive into a tranquil and comfortable atmosphere. The pool is surrounded by an enclosure of floor-to-ceiling glass, introducing natural lights into the interior at a maximum extent. Besides, the overall transparency of the space visually brings a sense of spatial fluidity. Although removing the existing glass roof has sacrificed a part of the retail space, we believe that the integration between the interior and the exterior and the natural and flexible atmosphere of the architecture are more precious spatial characteristics. 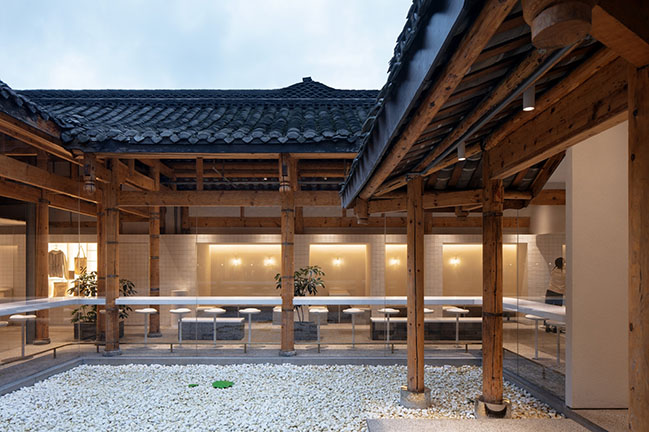 There is a set of bar seatings around the water so that guests can sit around the water courtyard, forming an intimate relationship among each other. While the water in front of them brings a certain sense of distance. The specific experience of seeing and being seen helps to enhance the interest of the public space. Around the pool we designed a loop indoor street featuring with two wide sides and two narrow sides, which is to echo the characteristics of the Kuanzhai Alley. 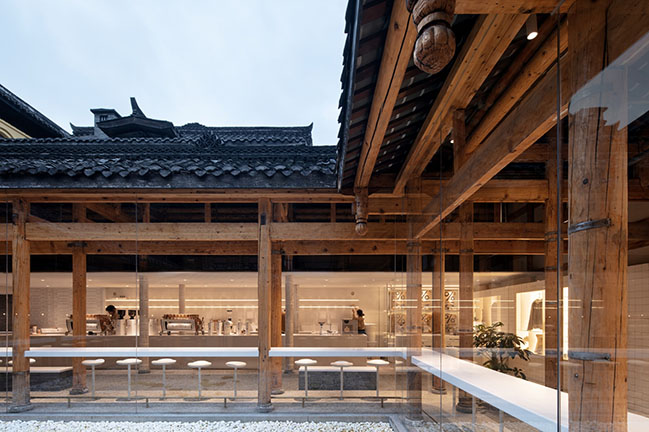 The floor of the looped street is paved with old grey bricks the can be seen everywhere in the Kuanzhai Alley, and it harmoniously blends into the context. Several seats, also made of grey bricks, are scattered around both sides of the path for people to slow down for a rest. 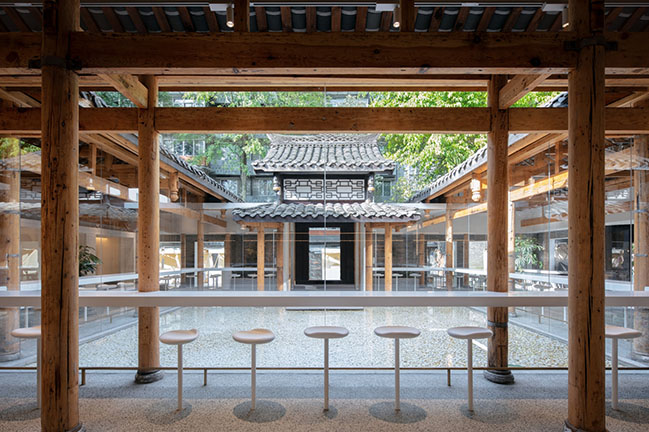 Next to the road at the end, we set a small semi-open room as a private seating area. The surface of the room is made of handcrafted bricks: the material’s irregular surface suggests a simple and natural texture. Traditional handicraft incorporates with the architecture with a strong sense of history, complementing each other. 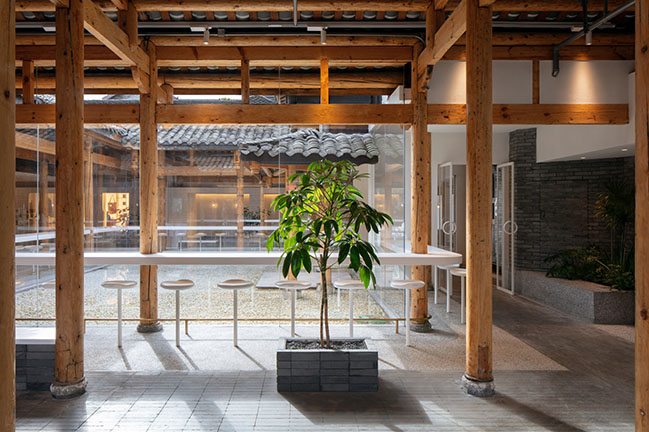 While showing the original structure and traditional elements of the architecture, we tried to integrate the essence of modern urban life and the minimalism aesthetics of the brand. The modern pure white bar counter area is introduced opposite the entrance and the pool, and is arranged under a light eave. 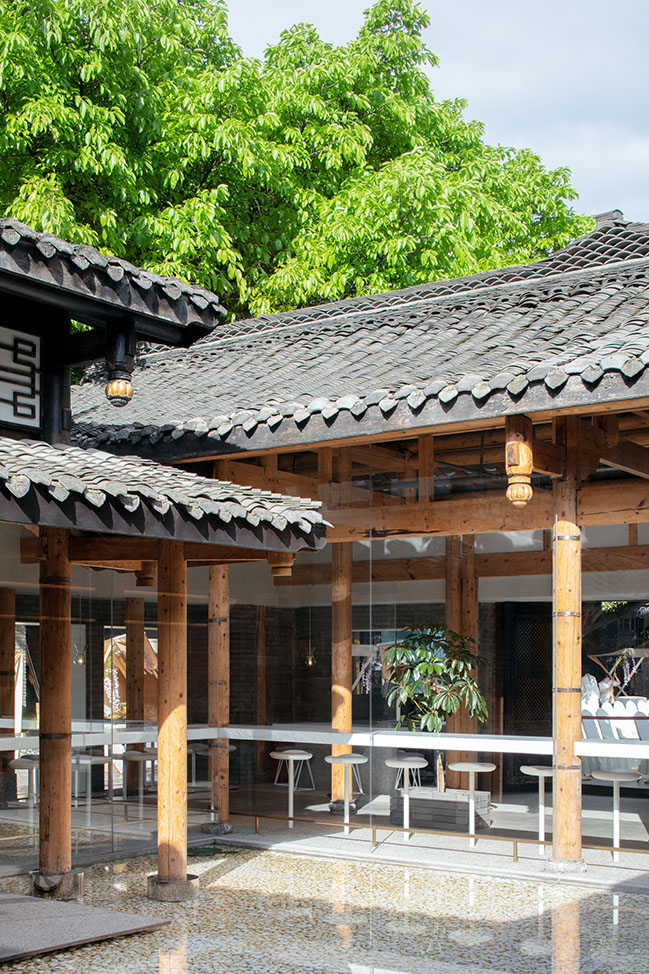 Like a roadside shop people may encounter while strolling on the streets, the bar area helps to increase the street-like experience and feeling. In this space, the overall spatial experience is dynamic and human activities have become the most important element. People walk, rest, and enjoy time freely in the café. The vibrant scene stands for a reappearance of life of old Chengdu. 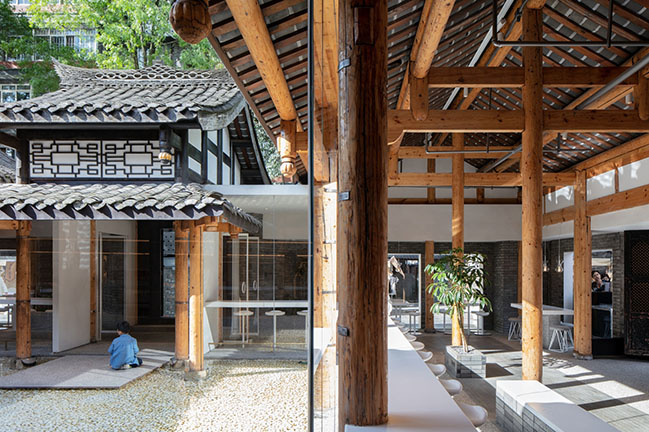 The ongoing dialogue
We believe that spatial design is not just about the visual experience. The core concept of our work is to deal with the relationship between human and nature, culture and daily life. The interior space of % Arabica Kuanzhai Alley represents a leisurely and comfortable living atmosphere in the streets and neighborhoods of Chengdu, while reflecting respect for the native culture. The process of the renovation is a continuous dialogue with the site and history. It is also our exploration of the publicness of urban space and the playfulness of urban life. 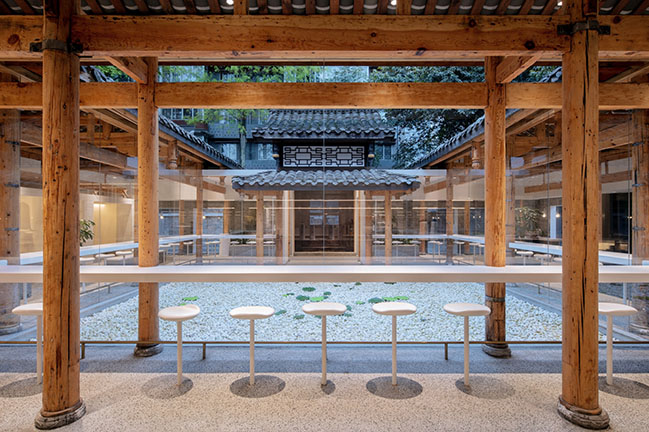 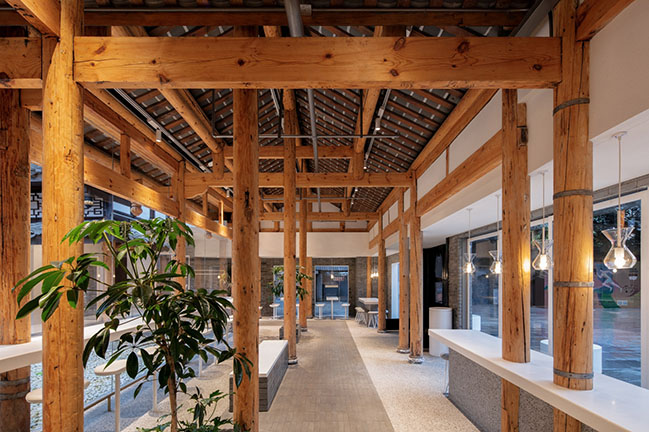 YOU MAY ALSO LIKE: Guest House in Kyoto by B.L.U.E. Architecture Studio 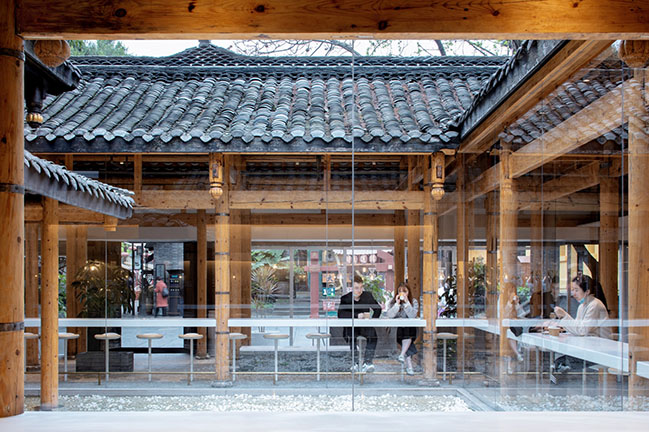 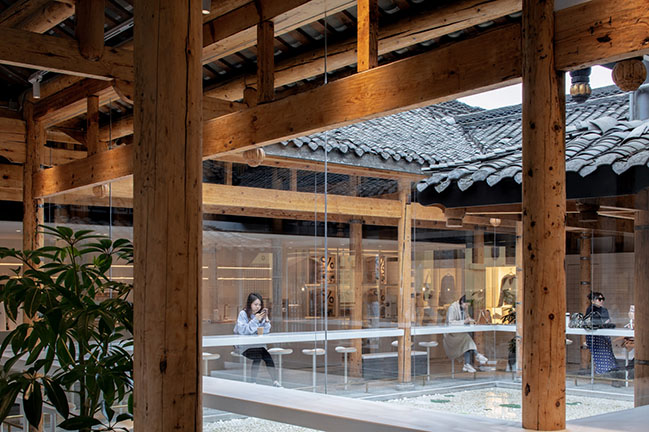 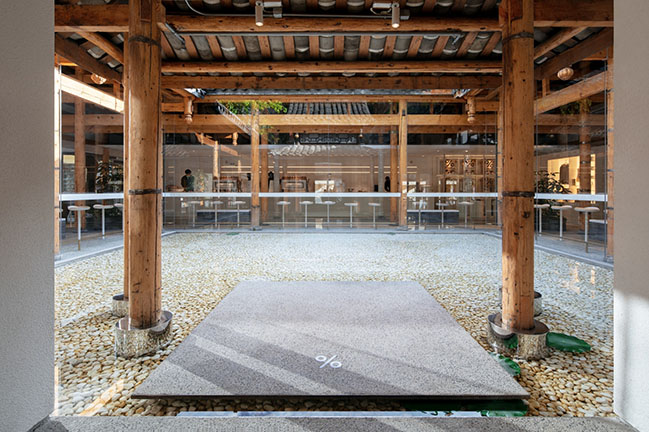 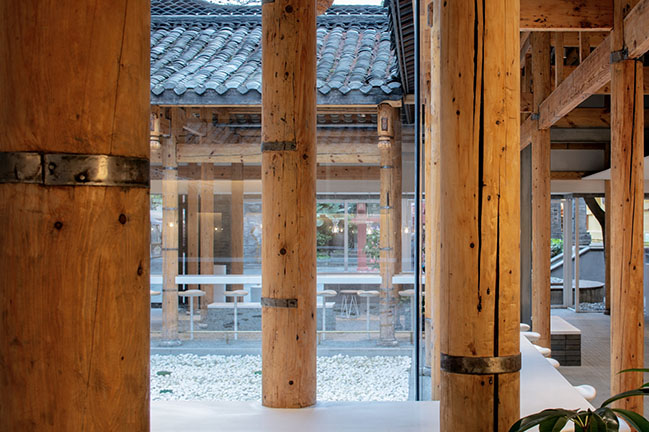 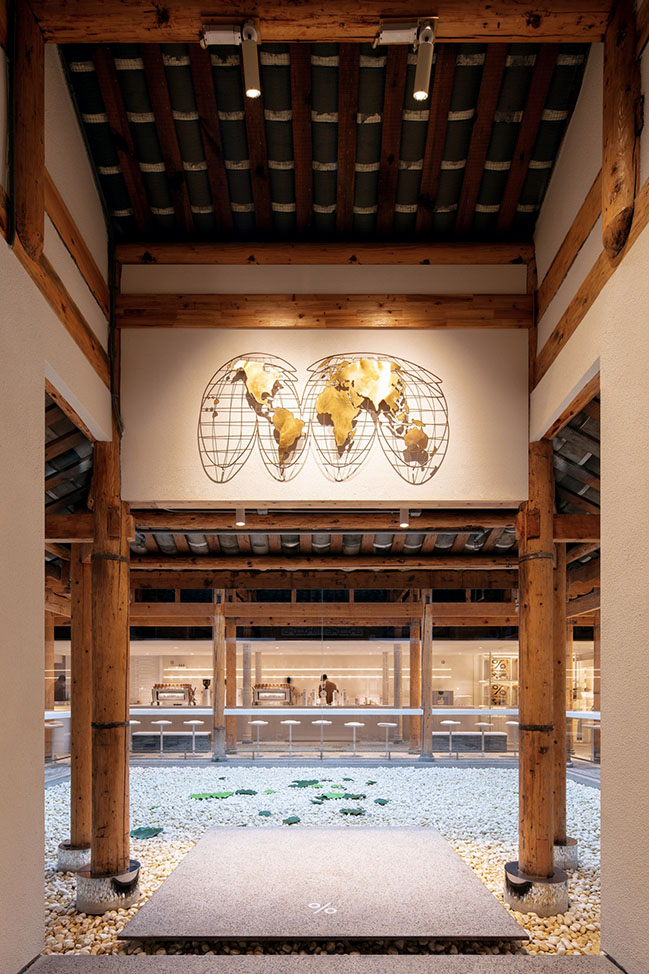 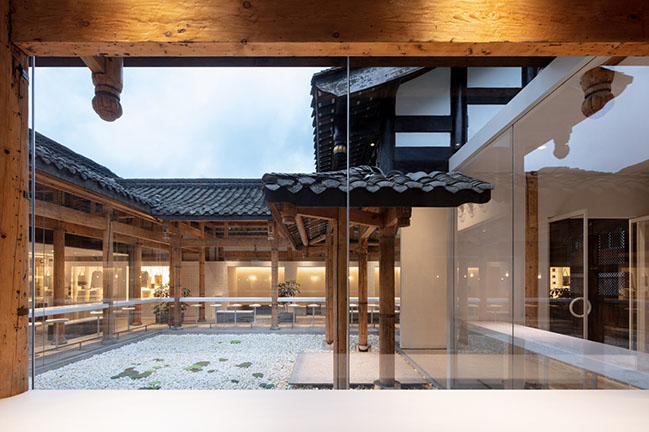 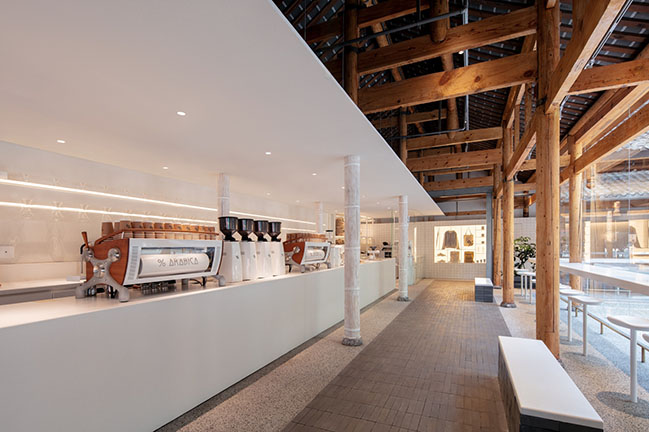 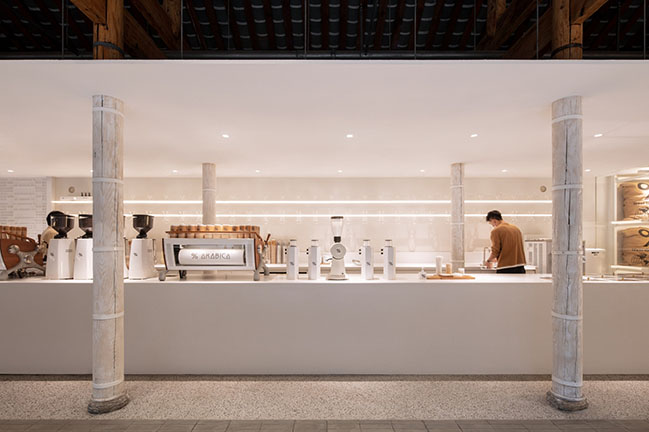 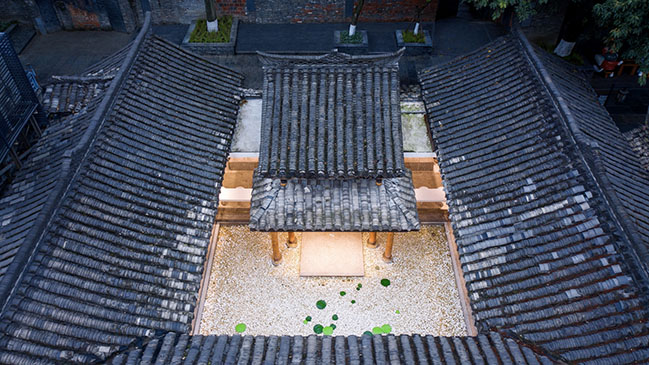 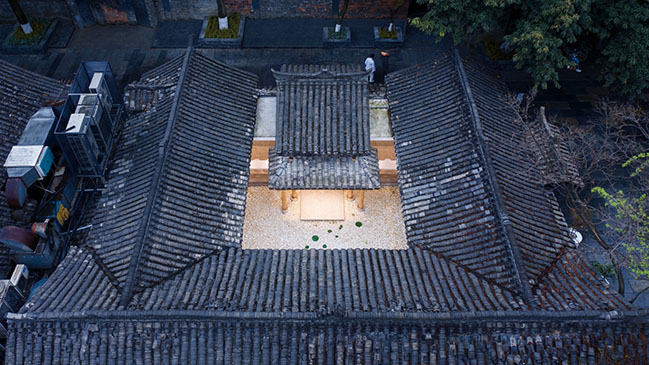 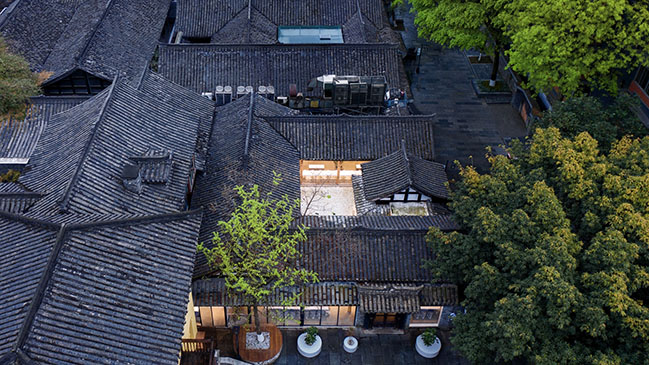 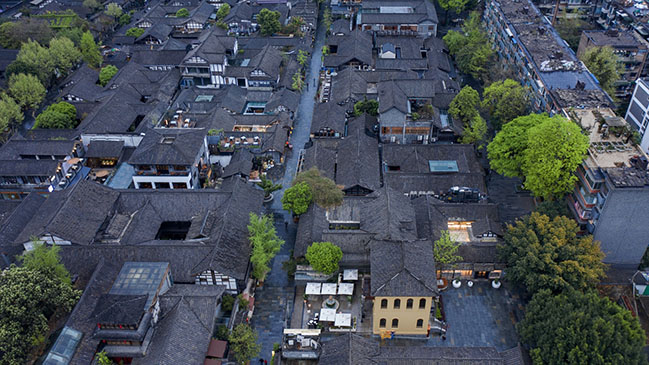 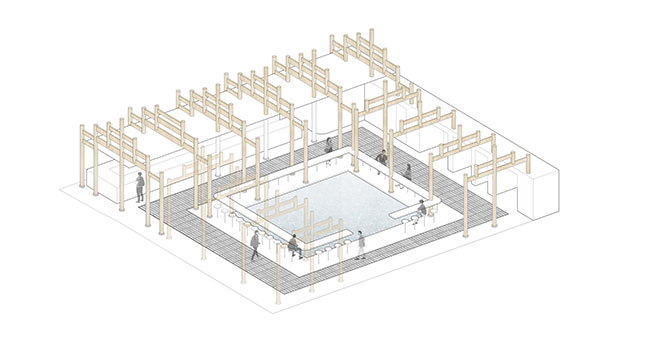 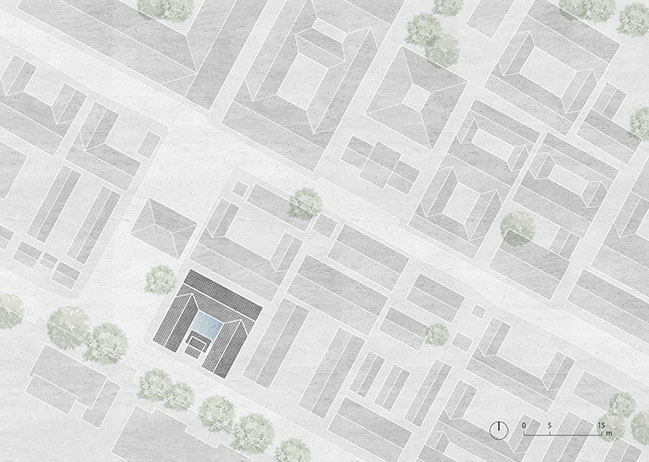 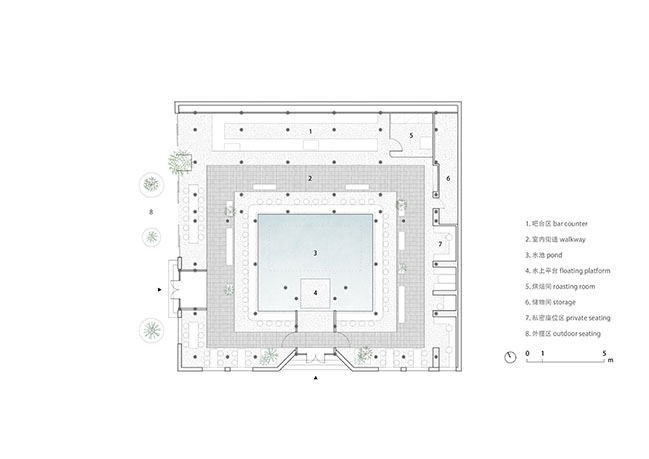 01 / 13 / 2022 With a city full of historical and cultural heritage, we tried to integrate and extend the city's unique characteristics into the space from a perspective of respecting the spirit of the site...