In the heart of the Pollino National Park, stands the small mountain town of Mormanno, among whose hills stands the Santa Maria Goretti Church designed by MC A - Mario Cucinella Architects, winner of the Pilot Project CEI 2011... 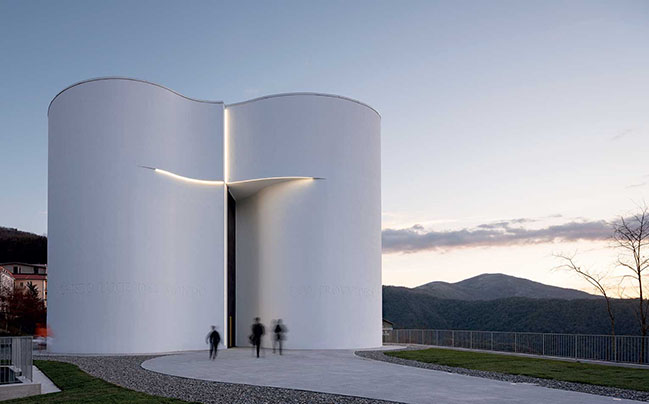 From the architect: Solitary and monolithic, the Church dominates the pre-existing urban context. Like a white, light and continuous sheet that bends and draws an organic plant, the architecture of the Church with its 16 meters in height stands as a casket that preserves and protects the intimate sacredness of the interior, in dialogue with the surrounding landscape. 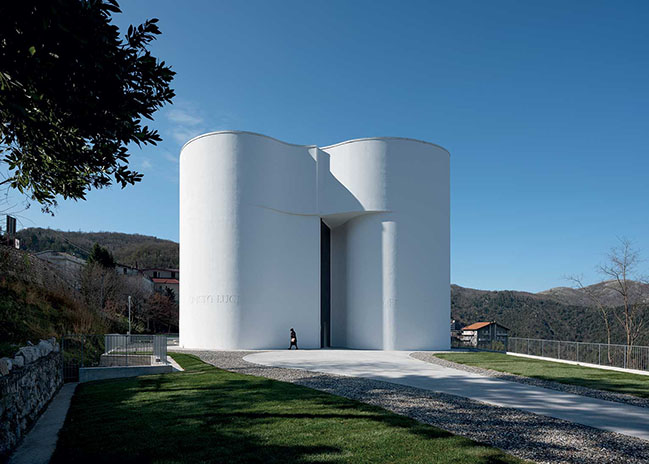 ''The architecture of the Church, its interior spaces, the artist's interventions are the stations of a path of spiritual growth. In the study of forms we sought balance: the ability to combine sacred moments with the liturgical enjoyment of the church. Designing a church is a message of continuity with the spirit of art that has passed unperturbed through the centuries of humanity." Mario Cucinella 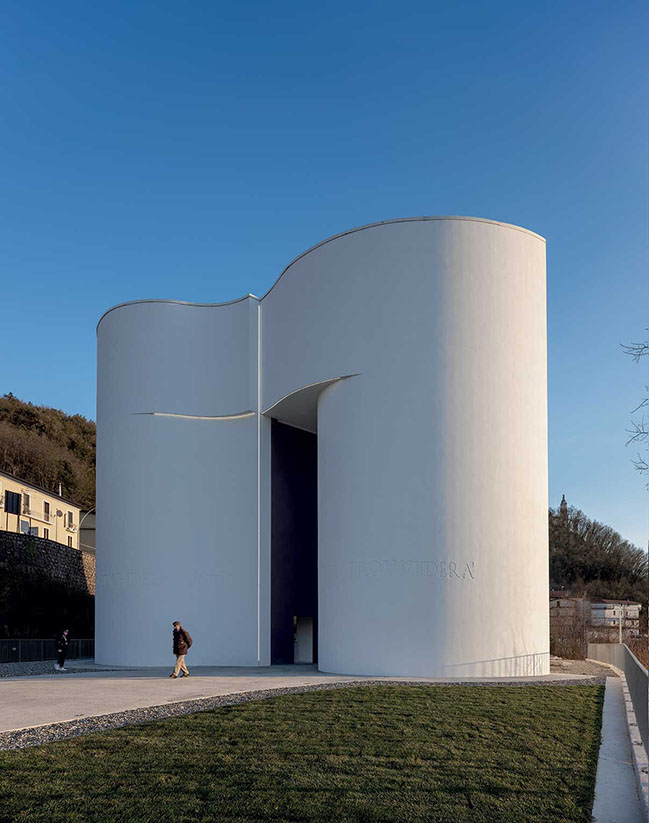 Taking advantage of the new access from the north-east side of the site, the Church is in fact the point of arrival of a spectacular route that overlooks the ridges of the Pollino National Park.

The premises of the rectory instead take advantage of the current access road to the site, creating a sort of small urban complex surrounded by gardens and overlooking the valley. 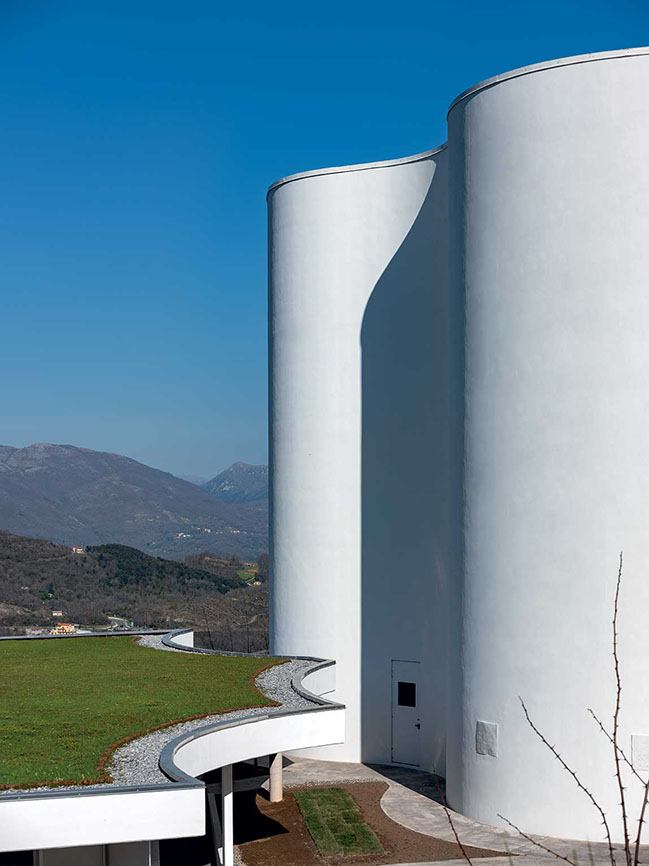 The monumental plan with an organic shape is inspired by the geometries of some of the most beautiful Baroque churches, such as the “Basilica of Sant'Andrea delle Fratte” and  “al Quirinale”, both in Rome, the Ghisilieri Oratory in Ferrara, the Church of “San Carlo alle Quattro Fontane” and the Church of “Sant'Ivo alla Sapienza” in Rome. 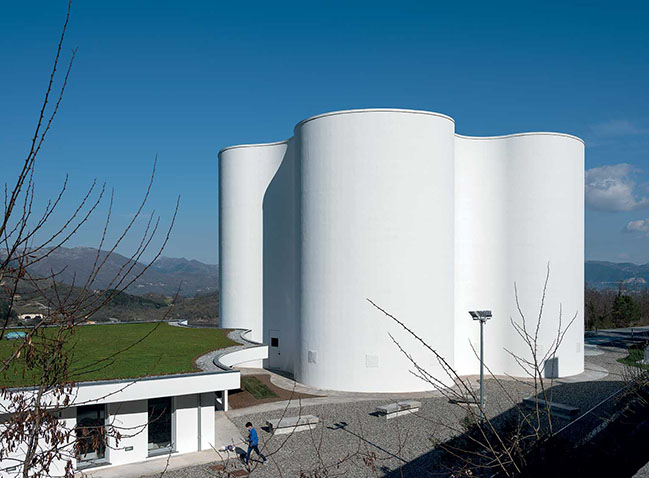 The main facade, which opens onto the new church square, is characterized by a few but essential elements that define the main signs of the Christian tradition: the entrance portal and the cross. The symbol of the cross appears on the façade through slight flaking of the casing that draw shadow lines generated by the intersection with the entrance portal, giving life to a slight incision with at the same time a strong expressive value. A sign that can be read from afar and that lights up at nightfall, thus becoming a sign in the night. 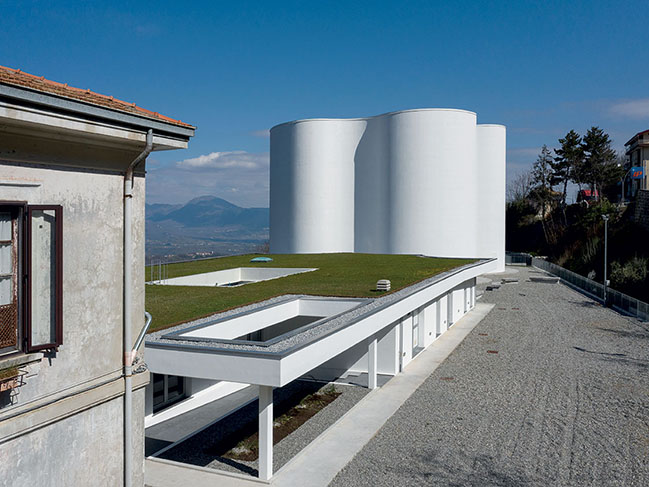 Along the outer shell, a series of clay tiles, made by the children of the local community during the period of distance learning, based on a project by artist Giuseppe Maraniello, tell the story of the "Via Crucis". Within this plastic scan, the episode of the crucifixion is narrated through a window overlooking the crucifix inside the church; On June 6, the date of death of the Saint to whom the Church is dedicated, a ray of light aligns itself with the window, completely illuminating the crucifix. 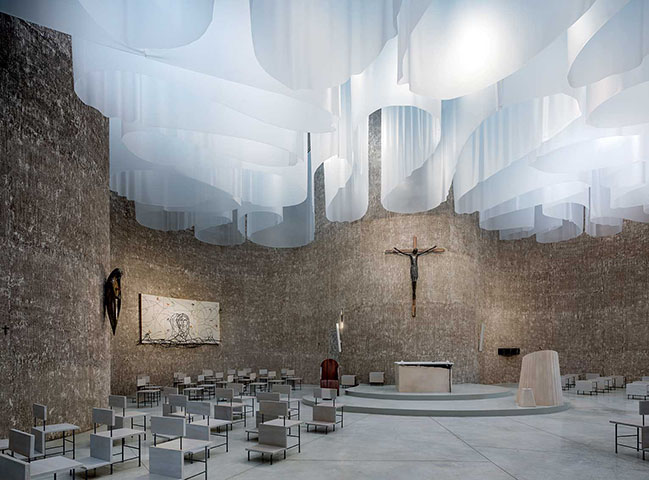 Particular attention was paid to the churchyard, which is characterized as a single path, paved like the interior of the Church, which accompanies the visitor to the entrance door. The monumental entrance to the Church is punctuated by words related to the life of Saint Maria Goretti, engraved on the facade, which symbolically accompanies the visitor inside the sacred space. 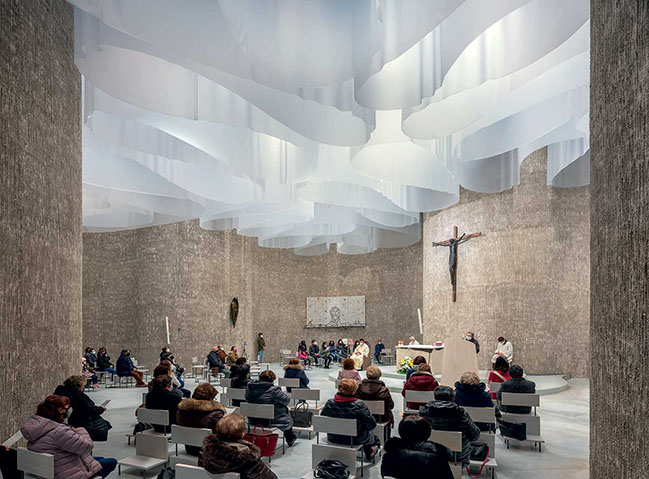 The interior is pervaded by natural light, the protagonist and symbol of the Christian language.

From the top of the Church, a series of translucent veils, like scenic drapes, fill the central space, reverberating natural light through its folds in a play of reflections that harks back to the mystical spectacle of the Northern Lights, thus creating an intimate and collected atmosphere. 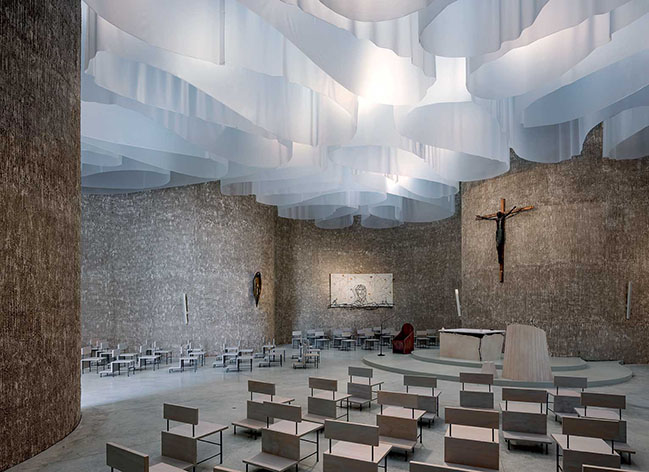 Bringing the two disciplines of Architecture and Art together harmoniously, the use of materials linked to tradition such as stone, bronze and mosaic confront and interact with the echo of the Baroque system. The sculptural works created by the artist Giuseppe Maraniello reflect the fluid shapes of the walls of the Chapel, such as the Ambo, the figure of the Virgin Mary, the Eucharistic Custody and the Baptismal Font. 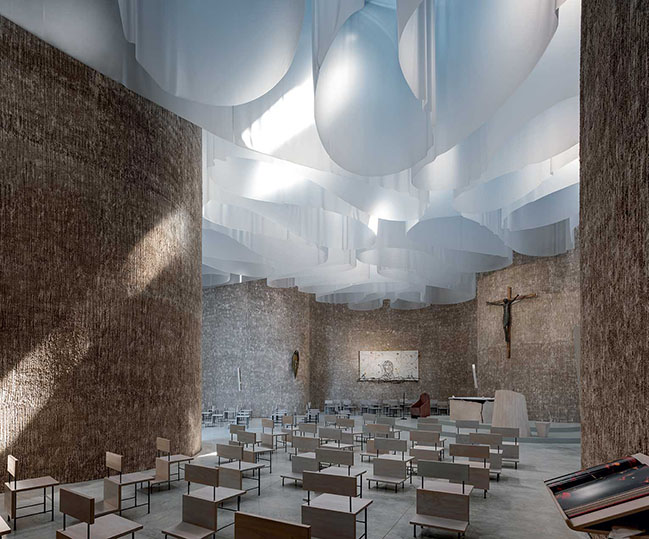 The furnishings in wood and steel, designed by MCD - Mario Cucinella Design, have been deliberately conceived with a minimal and austere design, to highlight the architectural and sculptural elements.

During the design, particular attention was paid to the harmonious relationship with the surrounding nature. The green roofs and the planted internal courtyards, as well as the organic garden in front of the Rectory for 0 km cultivation, also at the service of the community, contribute to the sustainability of the project. 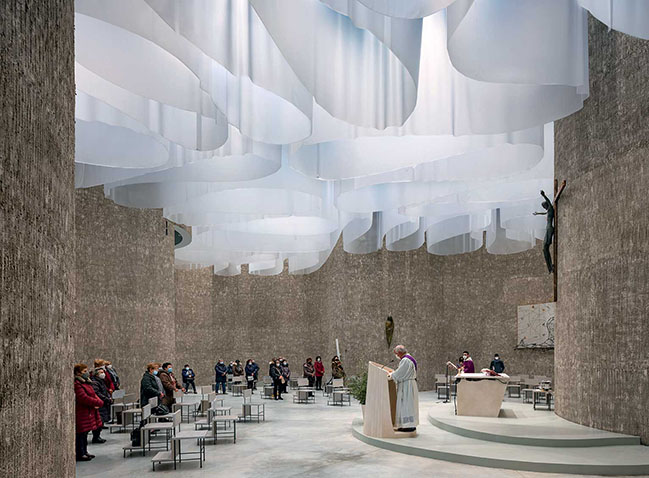 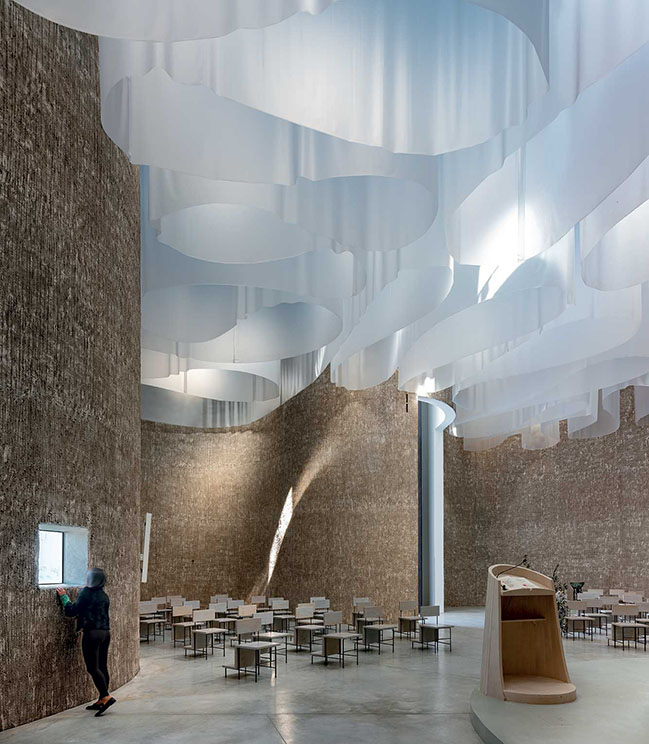 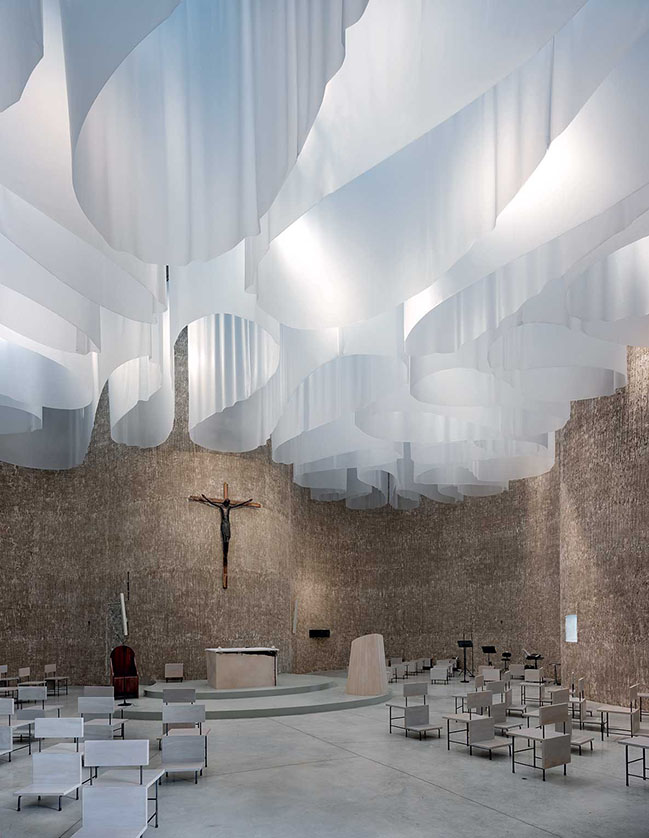 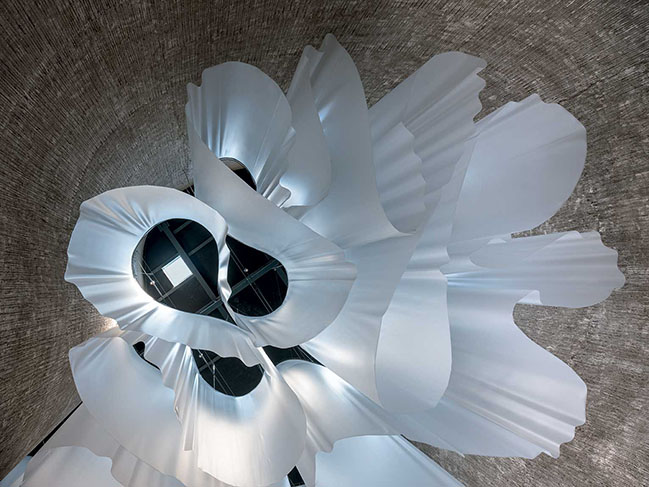 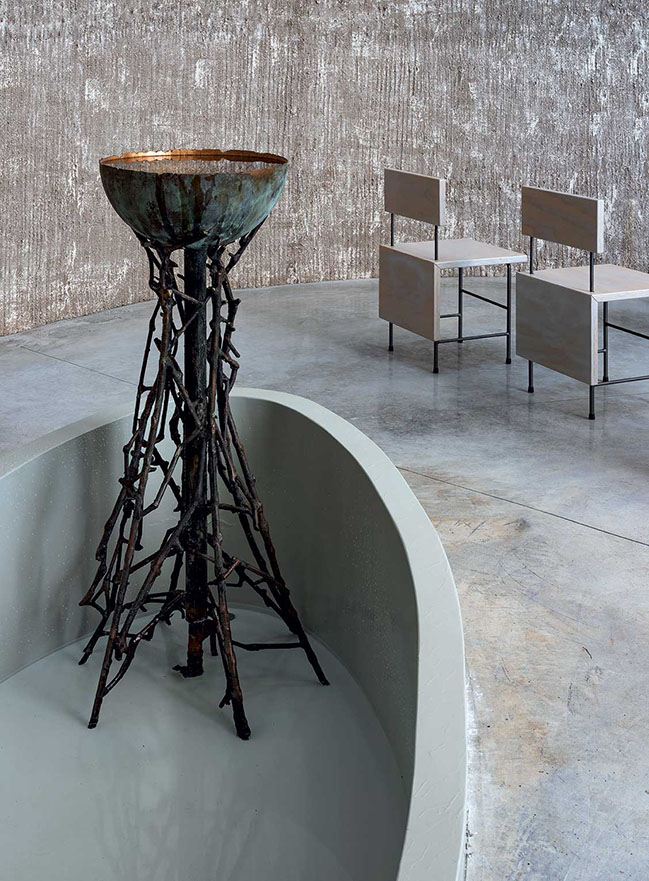 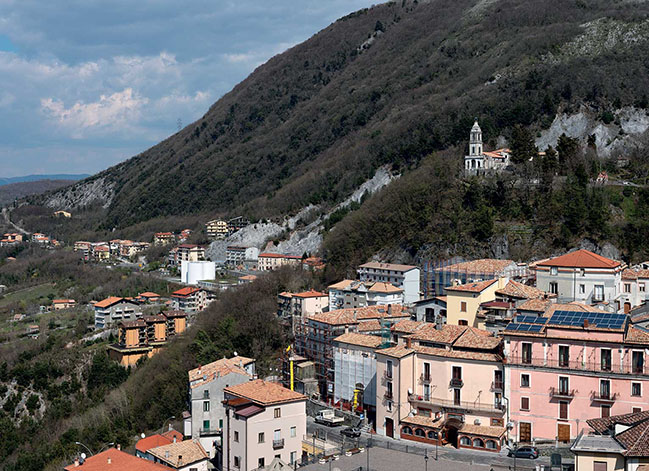 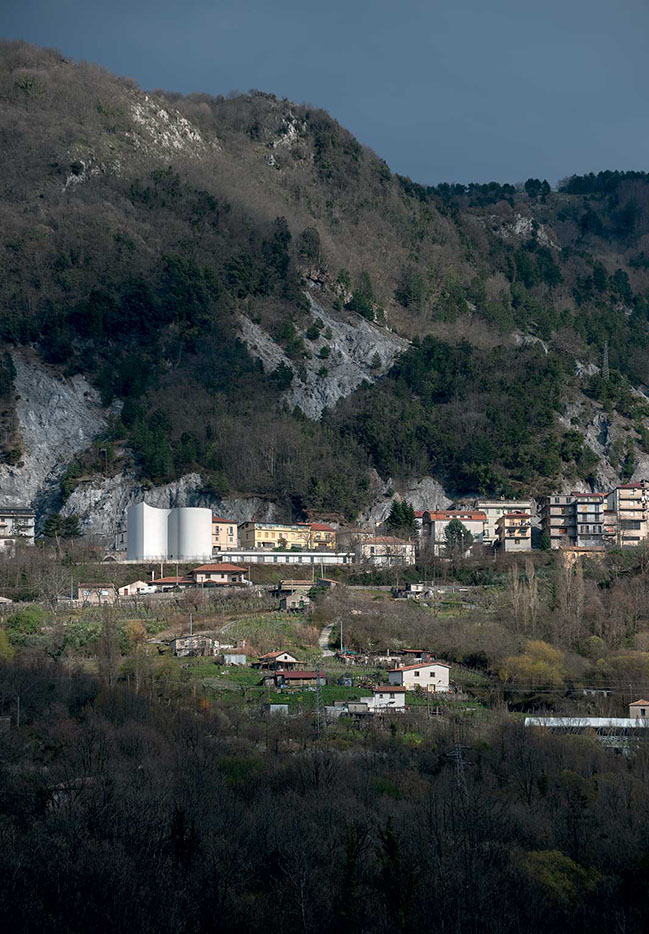 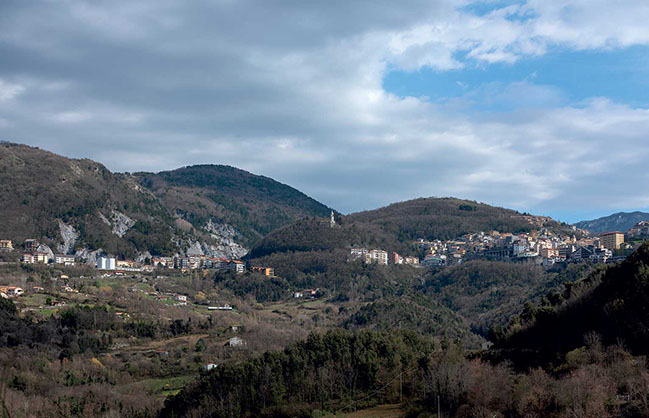 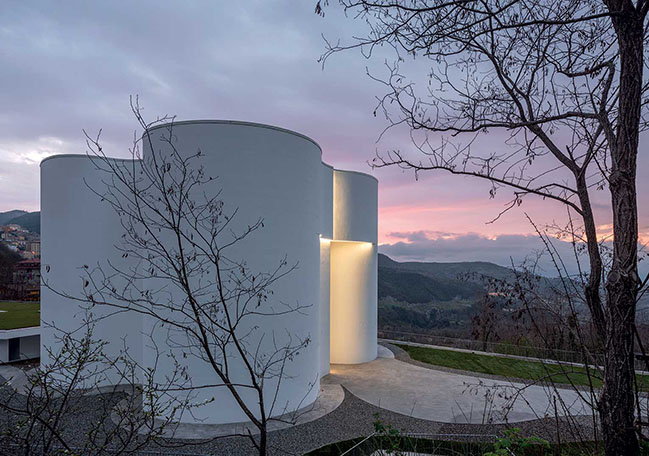 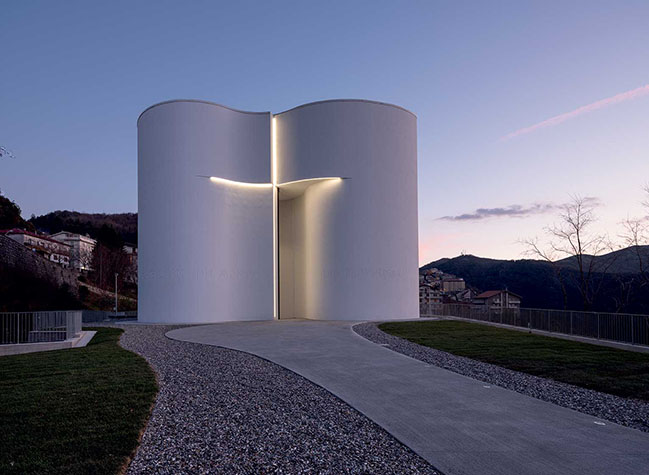 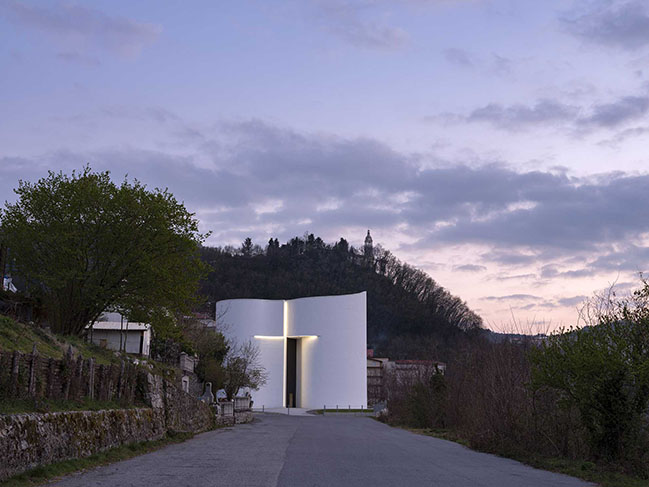 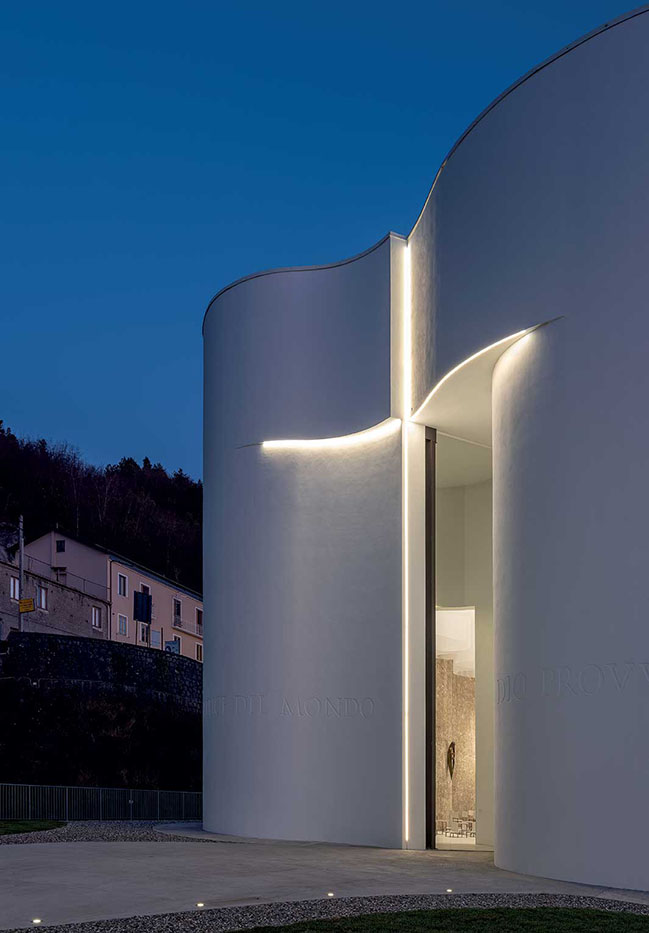 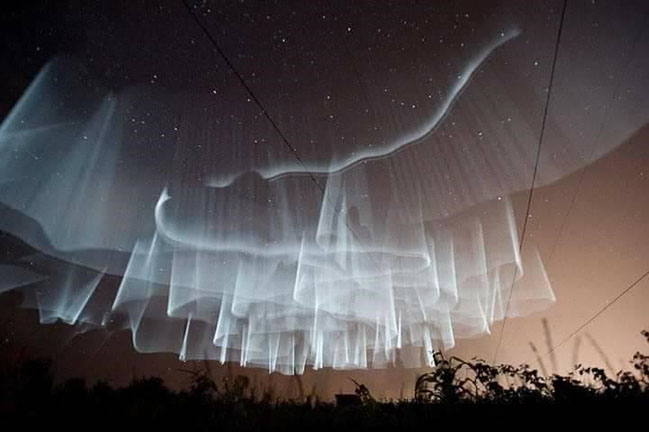 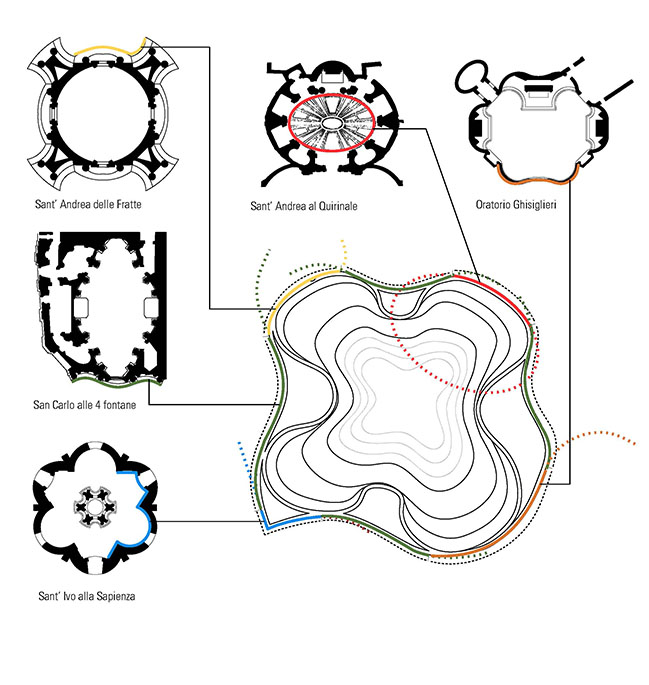 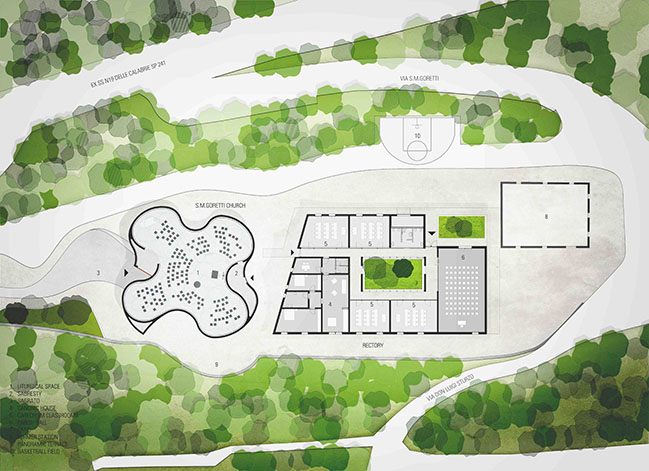 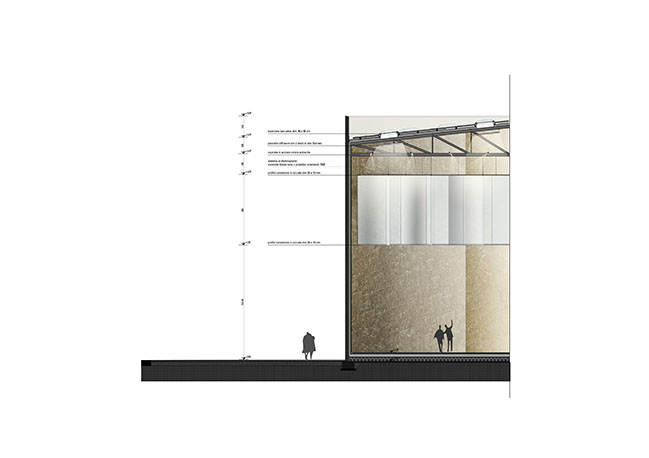 01 / 05 / 2022 In the heart of the Pollino National Park, stands the small mountain town of Mormanno, among whose hills stands the Santa Maria Goretti Church designed by MC A - Mario Cucinella Architects...