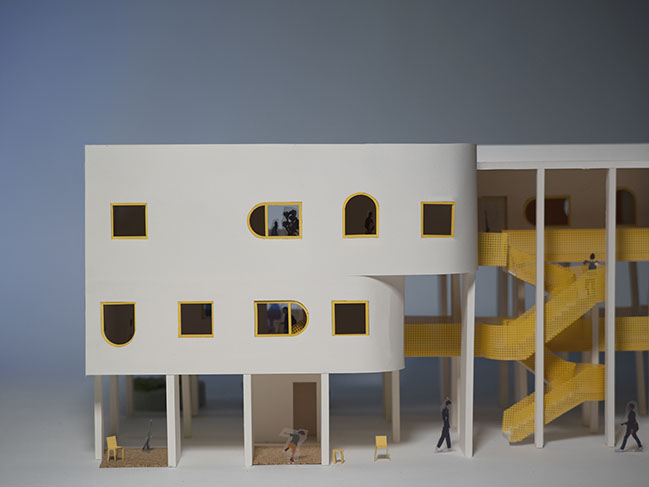 From the architect: The proposal responds to the City of LA’s Low-Rise competition, which calls for new affordable models for low-rise, multi-unit residential architecture, while also expanding Architensions’ interest in reimagining contemporary housing as multi-generational and deeply communal. 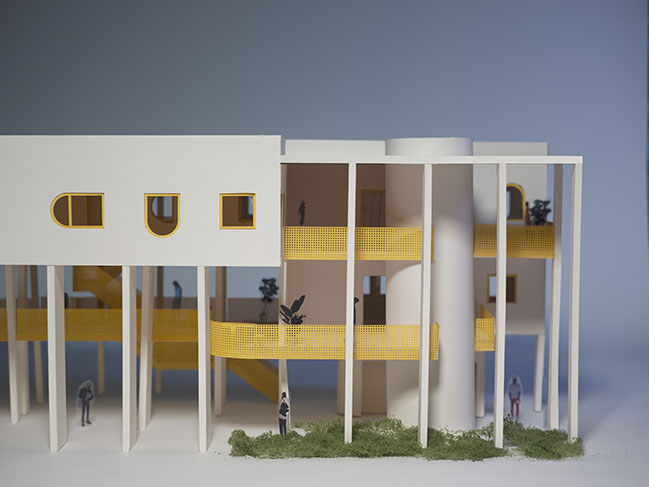 Following other cooperative housing proposals by Architensions like Big Ideas Small Lots in New York and the Ex-Galateo social housing in Italy, this project counters NIMBY attitudes and historically patriarchal, single-family typologies. Instead, the emphasis here is on shared spaces and functions. Significantly, the fourplex also responds to the oppressive lack of shade in historically low-income LA neighborhoods by weaving energy-efficient cooling strategies and canopied communal areas throughout the design, in lieu of traditional circulation corridors. 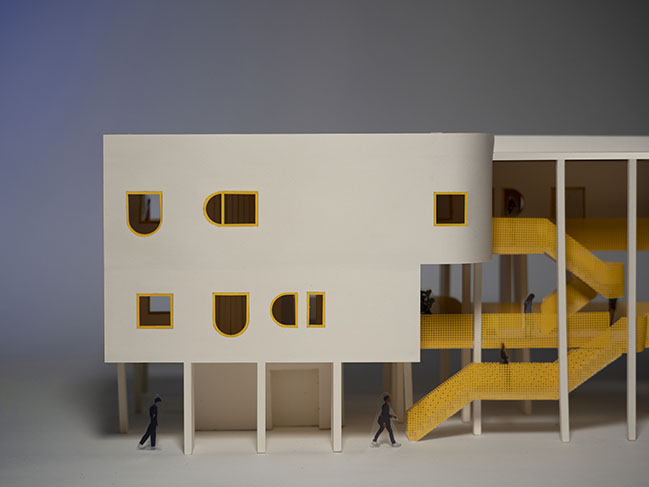 “With this project, we are attempting to overcome the contemporary idea of housing as a lifestyle. Units are not self-sufficient, isolating environments, rather they need the help of collective spaces created outside the units to properly support their inhabitants' daily lives,” says Architensions co-founder Alessandro Orsini.

“The problem of standardization of housing and their production has made architects rely on the same spatial distribution solutions. Instead, we want to transform under-utilized spaces such as corridors inside the units and lobbies to eliminate the idea of hierarchy and seclusion. In addition, we need to move on from the modernist notion of housing linked to the patriarchal family model informed by traditional male-female relationships and the nuclear family as isolated unit,” adds Architensions co-founder Nick Roseboro. 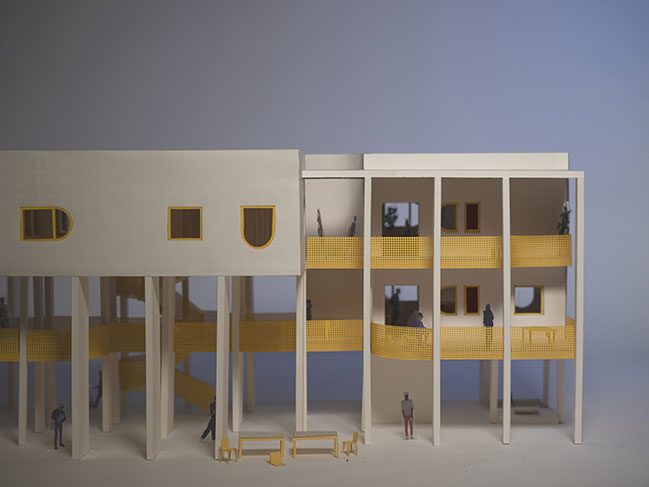 The complex gathers four units, which are legible as volumes suspended in a matrix of columns and outdoor communal balconies. Arranged on two levels and elevated above the ground, two 1250-sf units have internal stairs and entries on both floors, while two 600-sf units are single-story and clustered on the upper level. The varied square footage and layout draws heterogeneous ages and family structures—from young singles and elderly couples to a diverse range of larger, multigenerational families. Each apartment is organized around a modular service core which contains the kitchen, bathroom and storage area while also functioning as a divider that separates living spaces from bedrooms. Social spaces are intentionally absent indoors, in favor of outdoor communal zones that promote collectivity and community-building. 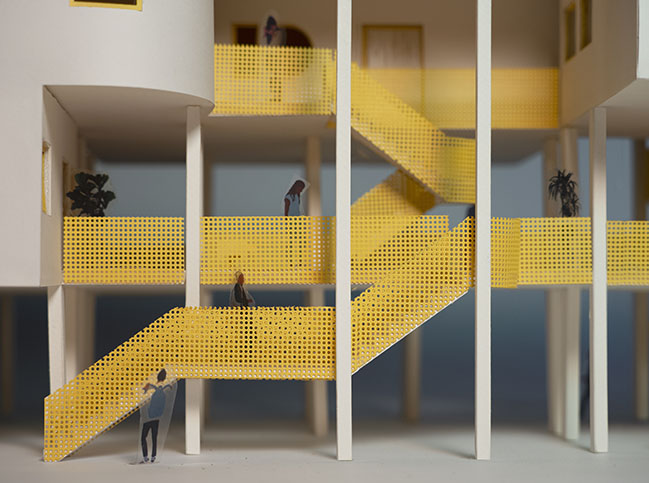 The heart of the design is a system of generously proportioned, shaded outdoor areas that connect individual dwelling units and expand living space for every inhabitant. They are conceived not as circulation zones but as shared spaces that are programmatically flexible and could be used for dining, entertaining, work, or relaxation. The importance of the balconies to the overall plan is emphasized aesthetically; Architensions envisions them as brilliant yellow bands that course through and standout against the white stucco and concrete structure. Architensions also highlights the windows—portals that connect private space to the larger community. They are ringed in bright yellow casements and irregularly shaped, rotating depending on the program of the room they accompany. 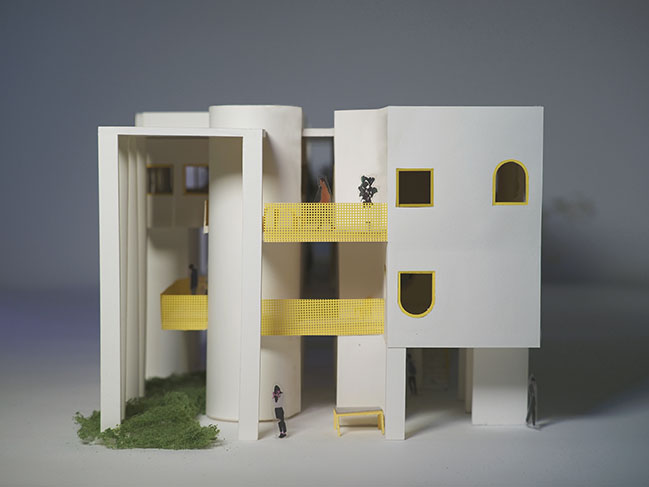 “The introduction of large communal spaces and accessible circulation outside the units is meant to foster an environment of help and solidarity with the older inhabitants of the building,” explains Orsini. “The simple fact that leisure time can be spent outside the units exposes people to human interactions outside their immediate co-living environments.” 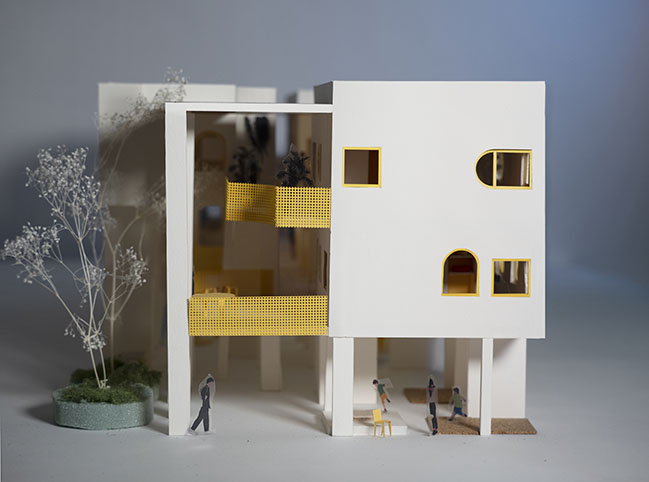 Equally significant is the full-lot communal outdoor space on the ground level, created by lifting the building on a forest of columns. This move improves on the Los Angeles Dingbat typology by utilizing the negative space for more than just parking. This lush, canopied zone offers a shady respite from the LA sun and is intended to be shared with the surrounding community. A children’s play area threads between columns towards the rear of the site, while gardens, planters, barbeques, and areas for relaxation activate the landscape. Two sets of stairs wind through the columns and connect the ground and the lower and upper levels, while an elevator near the street provides additional access. 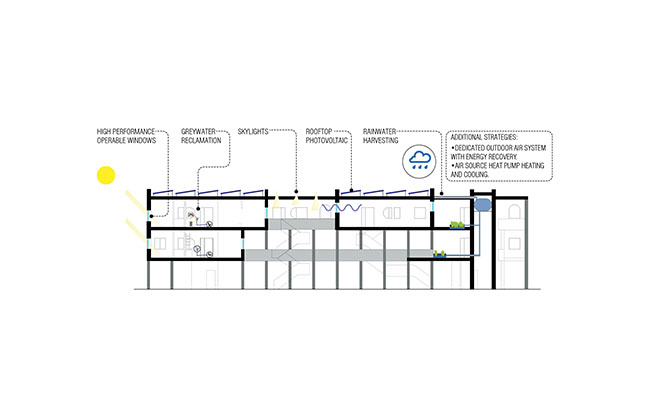 The cooler micro-climate generated by lifting the units from the ground also helps minimize the energy and costs used for cooling, while the hollow-core concrete structure further reduces energy output. The roof integrates a photovoltaic system that minimizes electricity consumption and supplies hot water, while also acting as a catchment area for rainwater. These strategies acknowledge the deep relationship between the Los Angeles housing crisis, income inequality, and environmental sustainability. 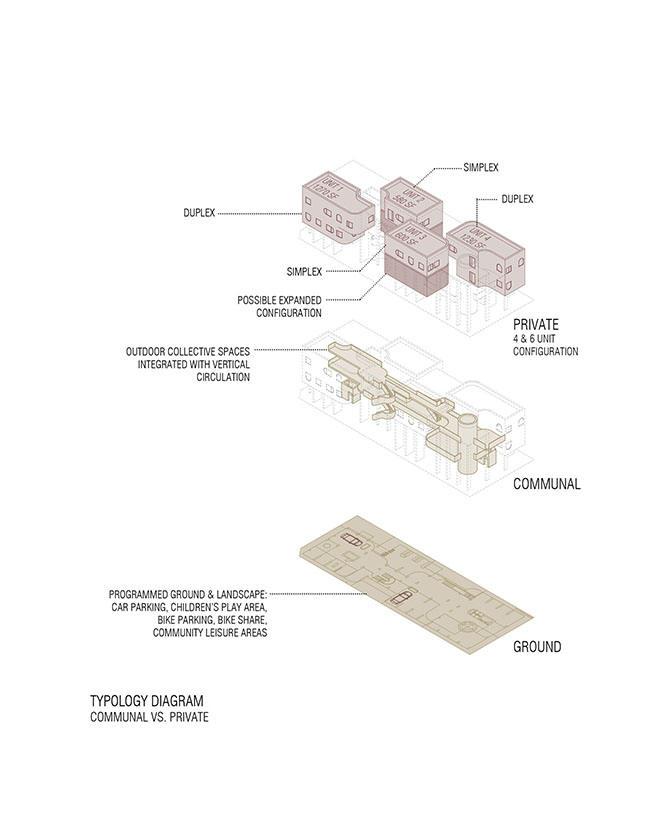 “Housing in the U.S. is currently almost entirely oriented around the notion of the home as a tool for the creation of wealth. This proposal, on the other hand, envisions housing as a tool to foster local communities and prevent their displacement through a cooperative model of ownership that aims at increasing housing affordability,” says Roseboro, indicating that the proposal would be well-suited to a group of owners looking to initiate communal living. “While most housing minimizes common space in order to maximize saleable square footage, this proposal emphasizes the needs for communal spaces in order to create healthy communities.” 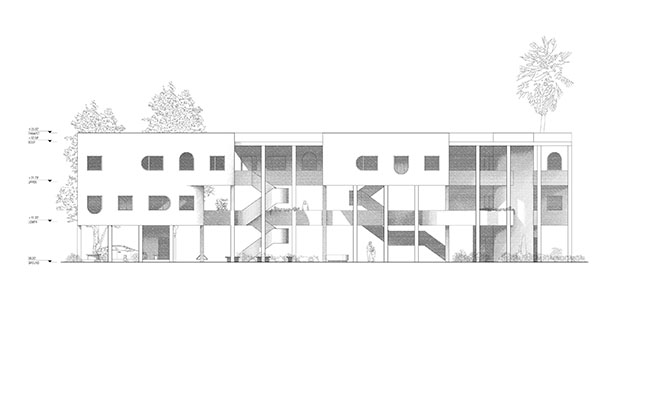 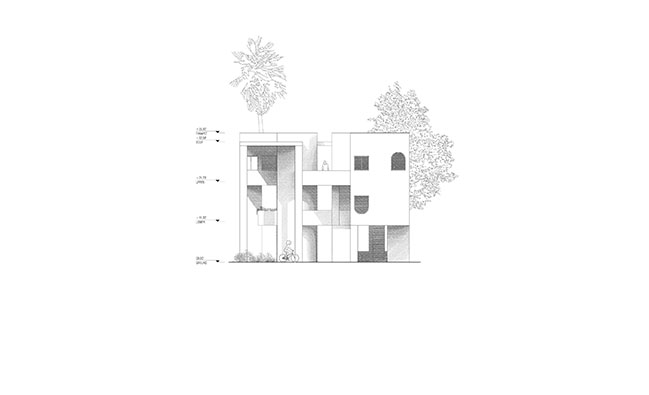 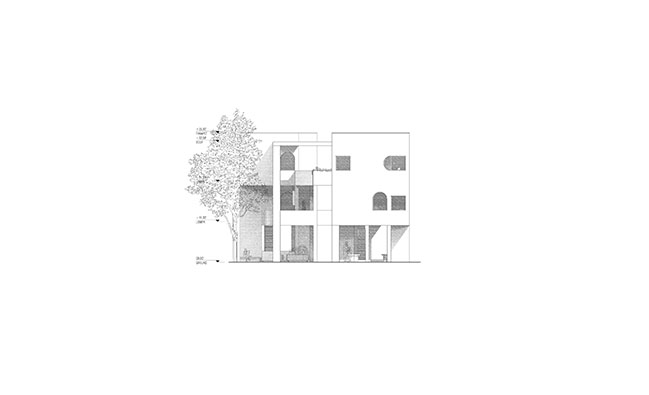 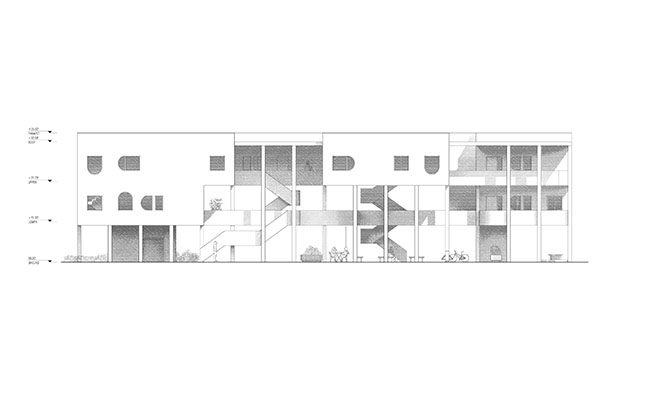 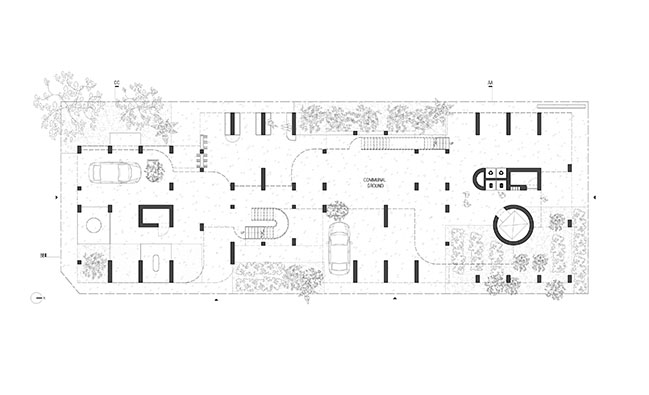 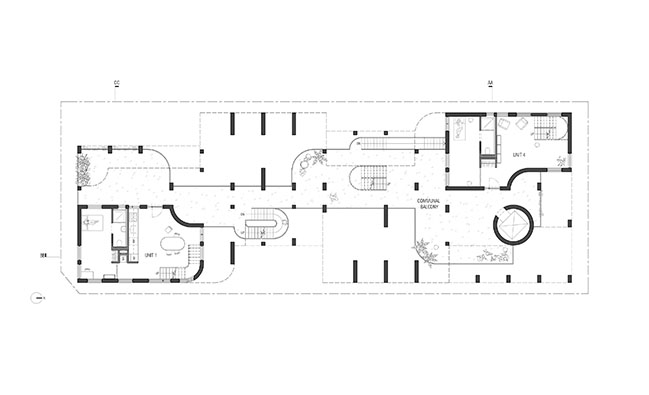 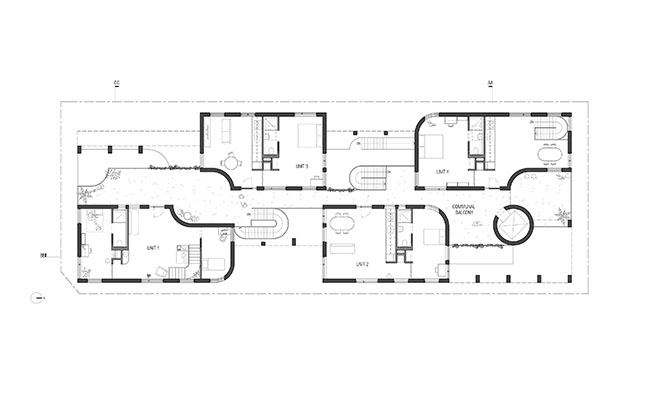 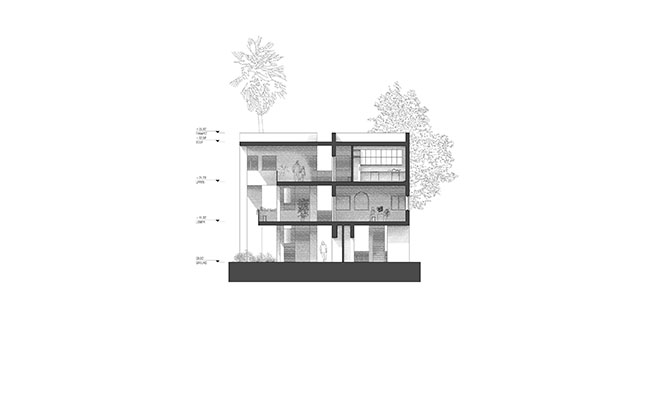 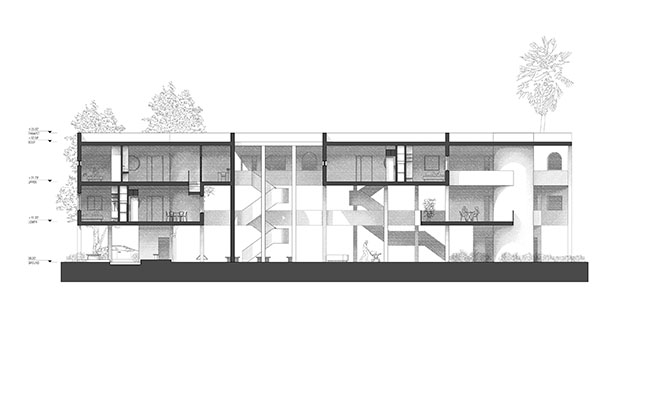 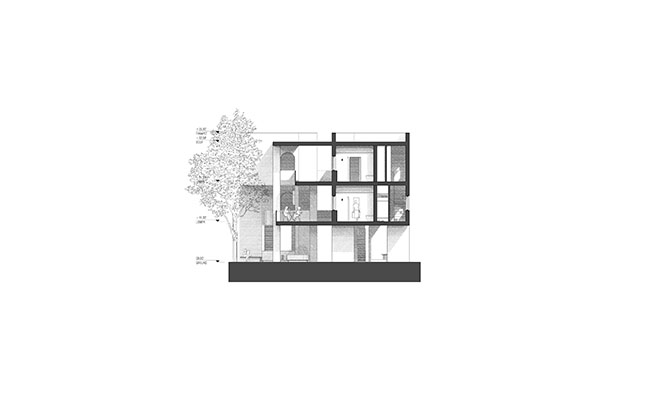 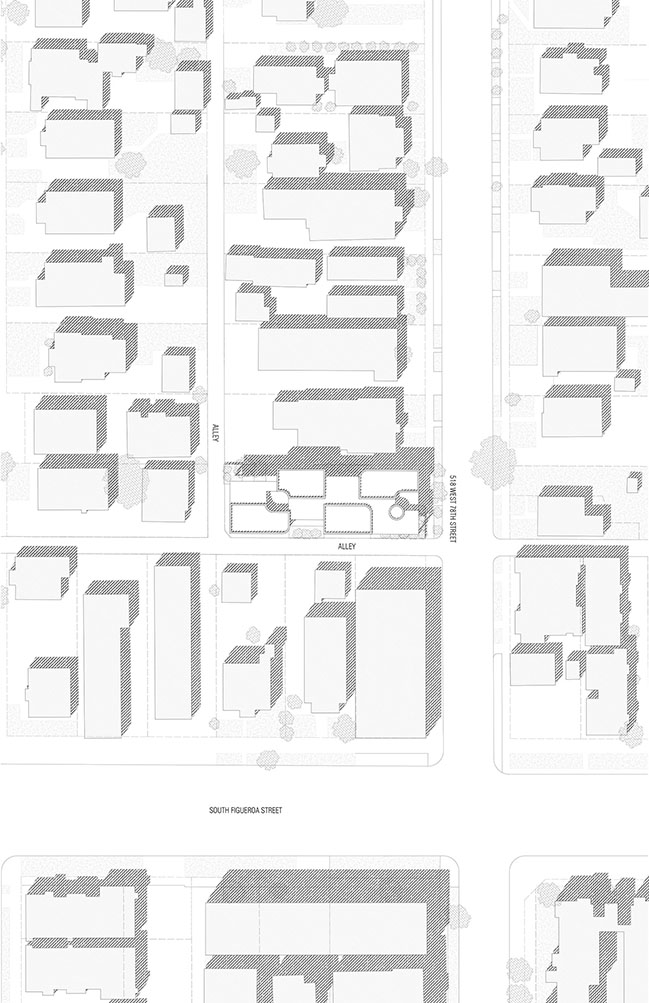