The mayor Halsema of Amsterdam will open Depot Amsterdam Noord, a new repository for the capital’s Stadsarchief, the city’s archives... 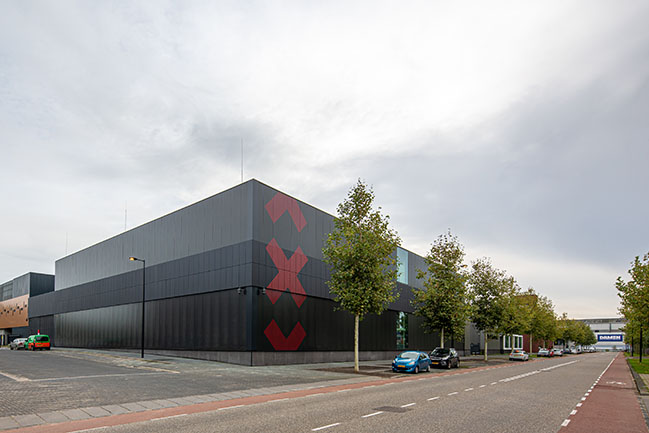 From the architect: The depot almost doubles the existing archive facilities and is completely energy neutral. Moreover, it has a flexible design that renders the building circular and removable: it is easy to use it differently, give it another function or to use it as a material donor for other buildings in the future. Especially for an archive building, that is extraordinary. 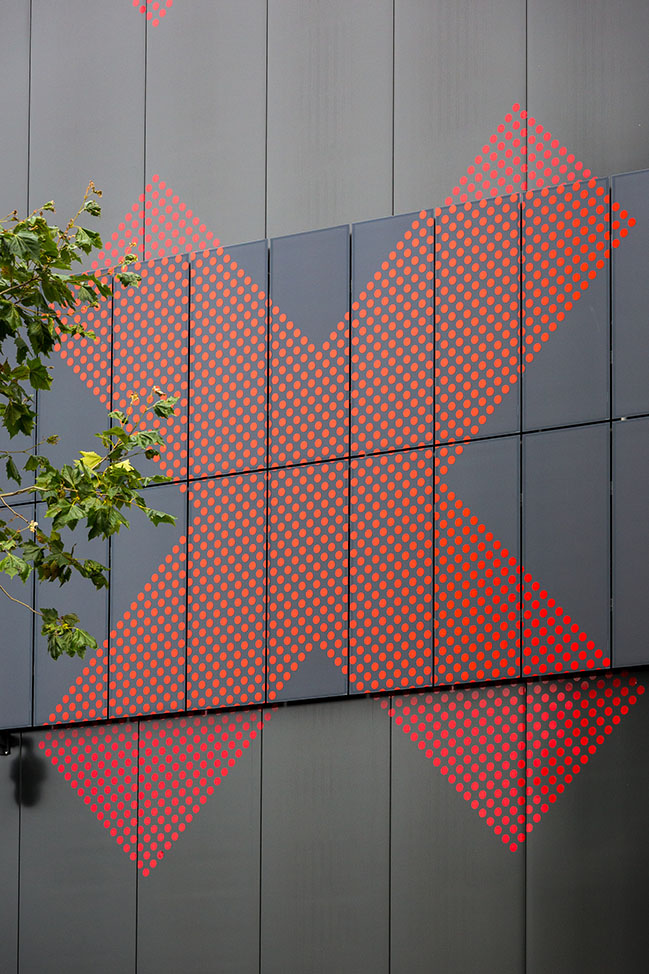 45 km extra shelf space
The new repository has been realized by BAM Bouw en Techniek within a Design, Build & Maintain assignment. cepezed and cepezedinterieur designed the building, which is located in the north part of Amsterdam on the corner of Tt. Vasumweg and Internetstraat. With a gross floor area of ​​2,665 m2 and 45 linear kilometers of shelf space, Depot Amsterdam Noord contains all municipal archives from 1811, when Napoleon introduced the Civil Registry. The pieces from before that time, as well as posters, prints, photos and film material, remain in the monumental De Bazel building in the centre of Amsterdam. De Bazel also remains the public centre, with room for research, exhibitions, events and courses. 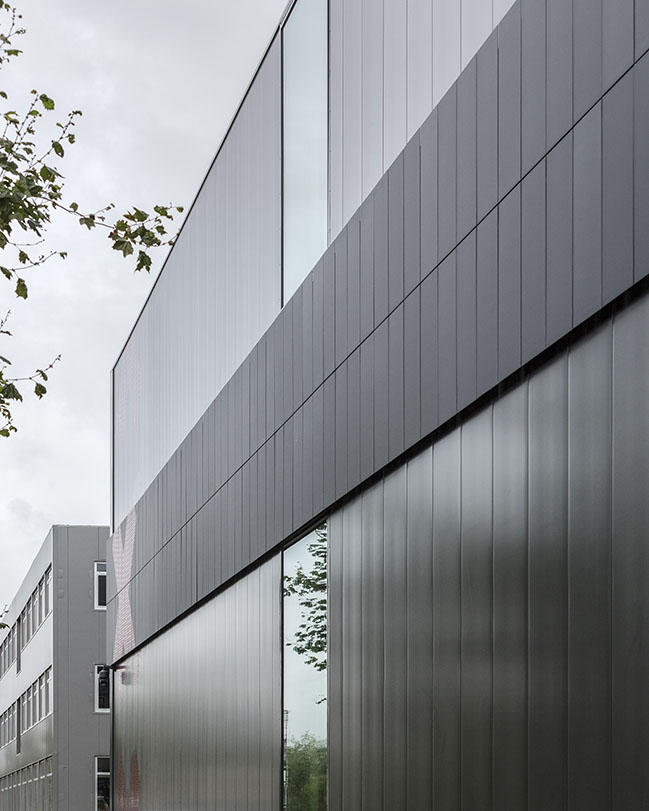 Functional and efficient
The new depot does not receive visitors and has a purely functional and efficient design. In addition to the archive spaces, it consists of a small program of supporting spaces for the reception, quarantine, intake, cleaning and processing of documents. The archive spaces themselves consist of two largely twelve-meter high halls connected by a traffic zone with lifts and stairs. Special is that the halls do not have any structural storey floors. The filing cabinets cover the full height and the floors consist of wooden panels between the cabinets. This solution minimizes the use of materials, but also makes an important contribution to circularity and an efficient climate control. 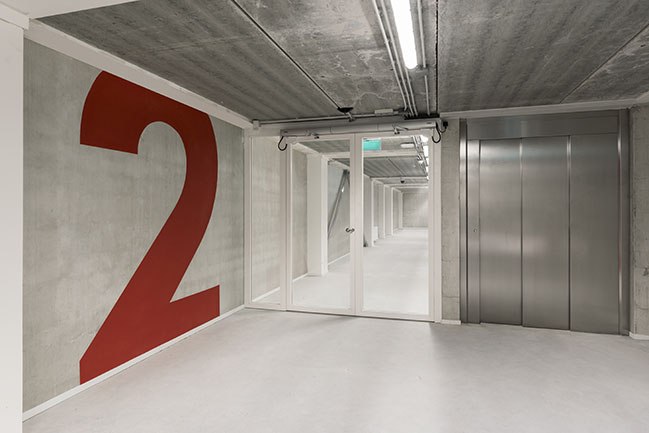 Safe loading and unloading
The depot fills almost the entire lot and is accessed via a narrow courtyard at the rear. This is accessible through an entrance gate on the Internetstraat that looks like a continuation of the façade. The gate forms the first security screen of the building. The courtyard is also the parking place for staff and offers access to the dispatch area. There, the electric delivery van of the Stadsarchief can load and unload safely and dryly. 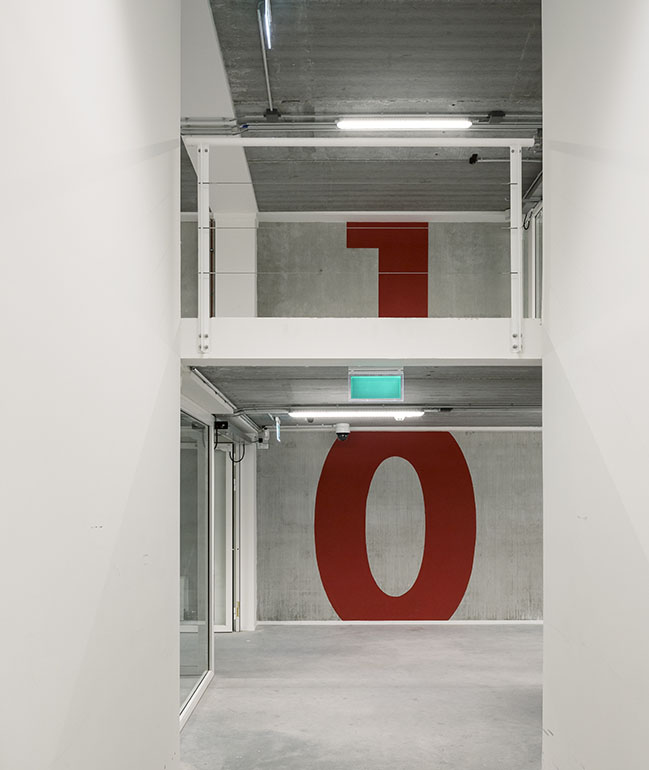 Robust aesthetics
The look and feel of Depot Amsterdam Noord is fierce and robust. The building block is almost completely closed and from the outside, it does not reveal what it contains. It has a dark, completely flush and anthracite-coloured façade with a horizontal band of solar panels in the middle that is also dark grey. The detailing is minimalist. The sleek and basic character of the building makes for a firm landing of the storage place within its surroundings. Strongly contrasting, the three red Andreas crosses from the Amsterdam logo have been placed on the grey façade. These have been magnified to such an extent that half of the lower and upper cross has "fallen away". This also contributes to the robust appearance. 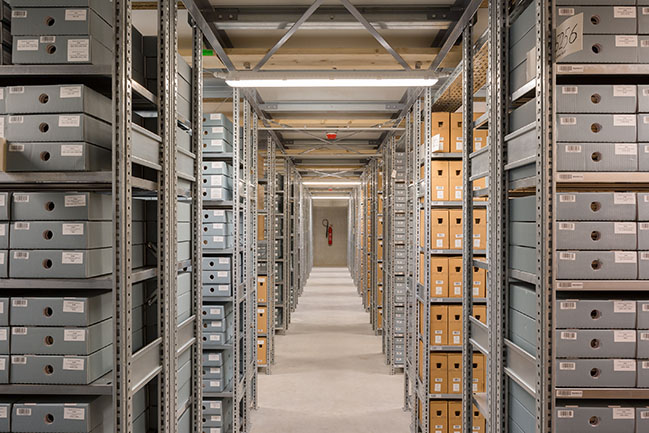 Energy-efficient climate concept
The climate is specially tailored to the machine-made paper types that have been used since 1850. These types of wood fiber papers are much more vulnerable than the handmade rag paper from before. Therefore, they require special storage conditions in which, in particular, a stable humidity at a relatively low temperature is important. An energy-efficient climate has been achieved by applying an airtight, highly insulating shell combined with minimal ventilation and a concrete floor that is not insulated but is in direct contact with the ground below it. For the larger part of the year, there is no need for heating, cooling, humidification or dehumidification; both temperature and humidity remain within the permitted margins without regulation. The uninsulated floor acts as a passive heat and cold storage facility: it provides natural warming in the winter and natural cooling in the summer. Adjustment is only required during extremely cold or hot periods. 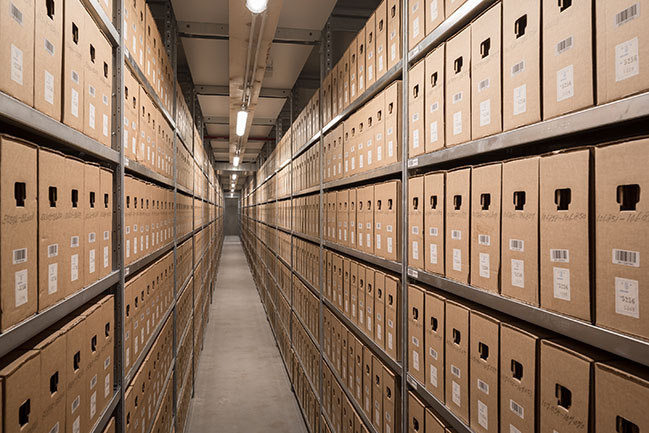 Energy surplus
A total of well over 1,600 m2 of solar panels provides the energy that is still needed, also for the staff area and the charging of the electric cars of the Stadsarchief. The façade carries 290 of them, the roof no less than 800. In combination with heat exchangers and the airtight shell, the building has an EPC of 0 and net, there is even an energy surplus. This is supplied back to the electricity grid.

Water retention
Another sustainability measure is a water retention of over 150 m3. The courtyard with parking spaces has a green design with grass stones and plants. Underneath it is a water shelter that functions as a drainage buffer during heavy rain fall. 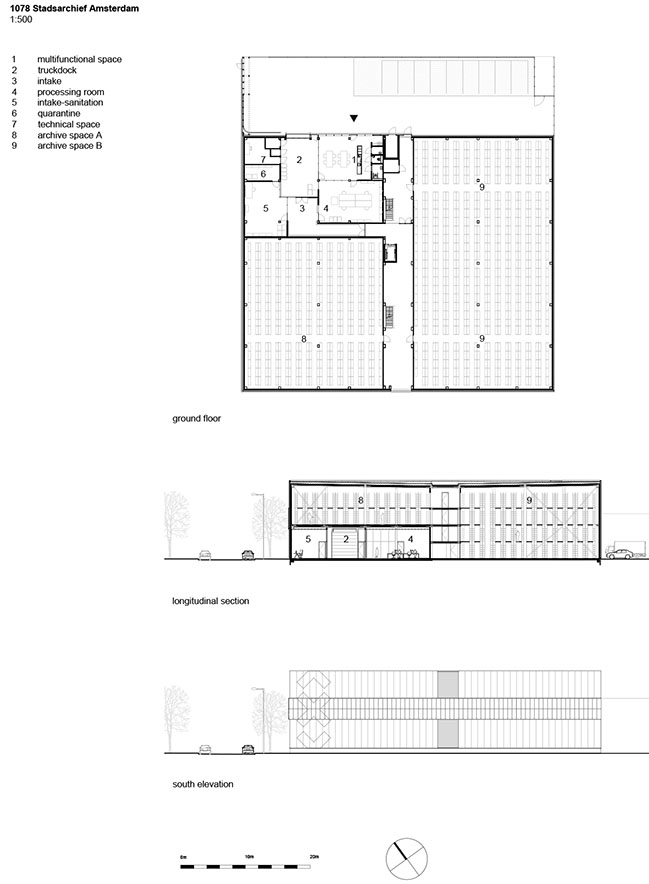 Circular design
Normally, archive buildings consist of solid concrete boxes with which there is little to begin after use. In keeping with the circular ambitions of Amsterdam, BAM and cepezed, Depot Amsterdam Noord has a completely different set-up. It is composed of detachable and removable parts that are prefabricated and largely have standardized system sizes. The main support structure is made of steel and can easily be dismantled. The walls are not cast in place, but also composed of prefab elements. This not only contributes to the circularity of the depot: because the walls have not been cast in situ, there is also much less moisture in them, which is better for the archive climate. The cracks between the concrete slabs were rendered airtight and the façades are finished with sandwich panels. The absence of structural storey floors and the choice for wooden floor sections between the file cabinets are also important elements of circularity. Moreover, all materials are registered in the Circular Building Platform, the marketplace for the reuse of materials from main contractor BAM. 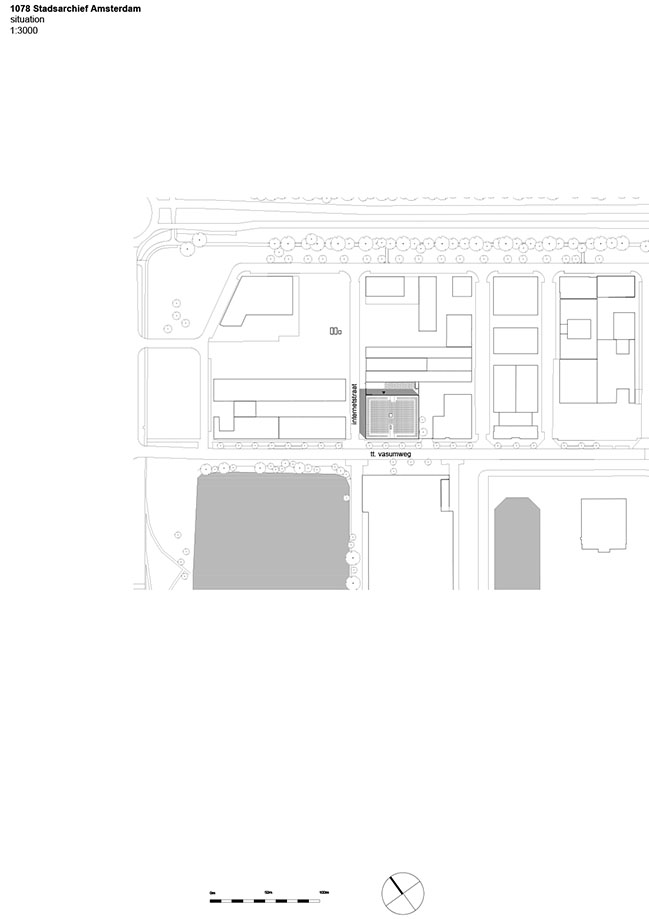 Archive optimization
The Stadsarchief has seized the new building as an opportunity to implement various improvements in its own methods as well. For example, the various archives are all stored in uniform boxes now, which means that the cabinets can be arranged efficiently. For more efficient ways of working, a new registration has also been implemented. With the help of barcodes, each piece can now be found quickly and without error.

Maintenance optimization
To keep the maintenance costs as low as possible, upkeep has also been minimized. Maintenance is largely based on data from sensors in the installations. These detect irregularities and malfunctions at an early stage. Predictive maintenance based on data saves both man hours and material costs. Moreover, service employees can access the installations via an access separate from that to the depots. Maintenance can thus take place independently of archive staff. An important tool for efficient maintenance and management is also the BIM model in which the entire building was set up.

11 / 29 / 2019 The mayor Halsema of Amsterdam will open Depot Amsterdam Noord, a new repository for the capital's Stadsarchief, the city's archives...