Hub of Huts by noa* | The village upside down

For its latest South Tyrolean realisation, noa* returns to Hubertus in Olang, one of the first places to have revealed the studio's expressive power. After the iconic cantilever pool, a new suspended platform defies gravity law by overturning the concept of wellbeing... 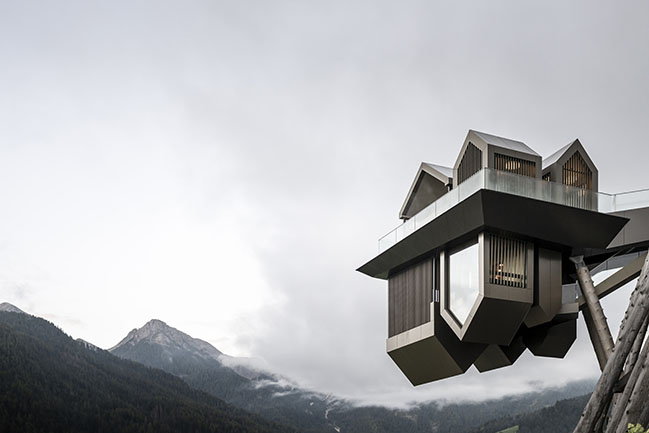 From the architect: When noa* designed the cantilevered swimming pool for Hubertus in 2016, the studio envisioned it as a rock stranded between earth and sky. In 2019 a new assignment was granted to the architects, the design of a dedicated wellbeing extension. It was not an easy task for a building that had already found its symbol in the swimming pool, yet this served as inspiration for the new project. 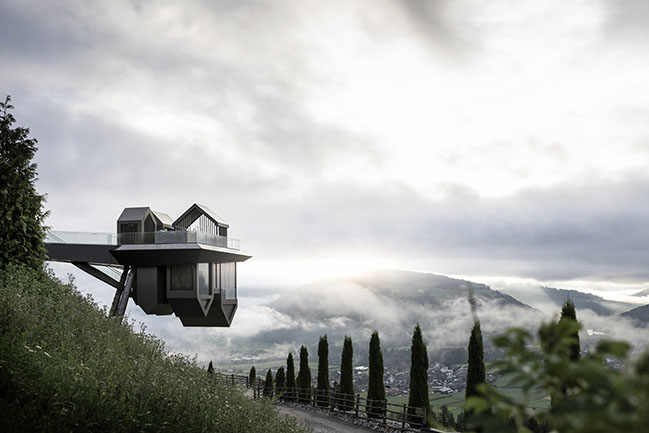 In an initial research phase, the team of architects examined the new starting situation and captured the house’s atmosphere in its context. From the observation of the surrounding landscape reflected in the swimming pool, the design concept came to life: to materialise what one sees mirrored on the surface of the water, as if the image were a transient rendering ready to be converted into reality. It is a concept that plays with the horizon line, the perception of upside-down, and the points of view. 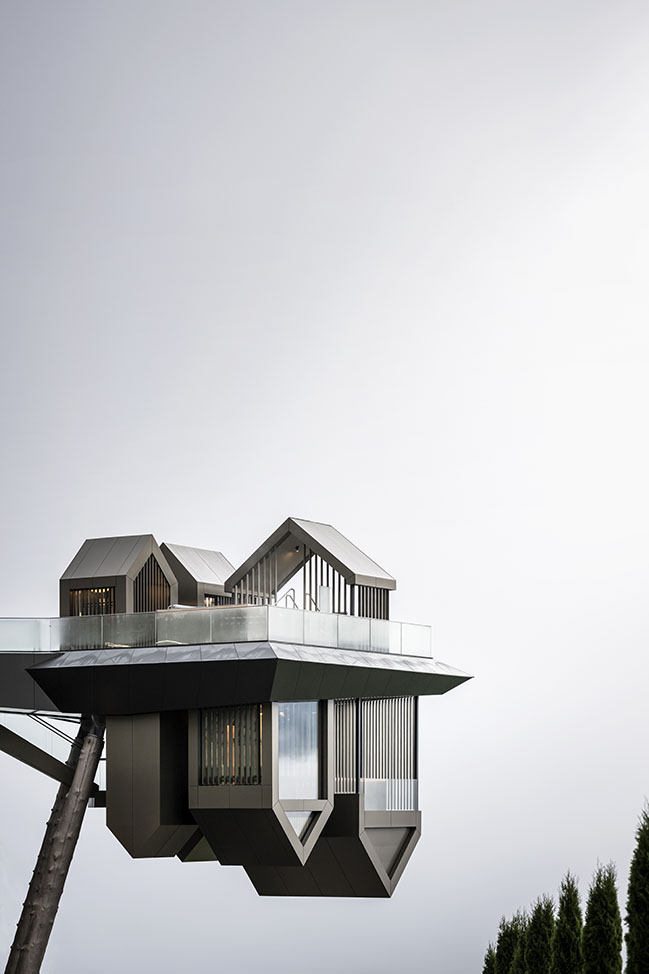 Lukas Rungger, the architect in charge of the project and noa* founder, explains: "The essence of this project is the overturning of horizons, with the resulting effect of wonder for the observer. If you think about it, however, changing perspectives is a common exercise in wellness areas, where, depending on whether you are lying in the sauna, sitting in the relaxation area, or diving headfirst into the pool, the views are constantly changing". 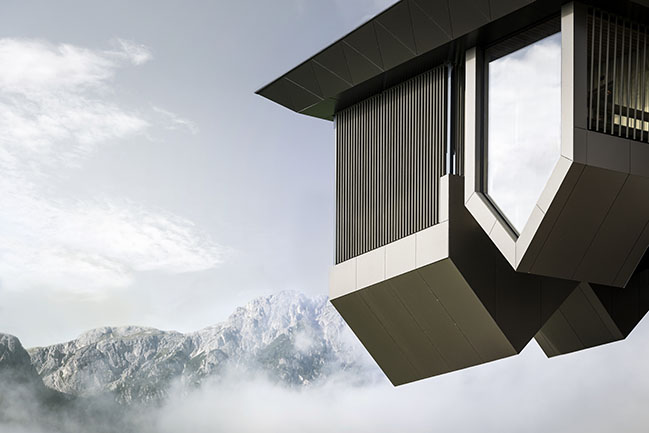 The new structure is located on the southeast side of the façade, in a position symmetrical to the swimming pool. Like the pool, this is also detached from the main building: the platform hovers 15 metres above the ground and is supported by two pillars clad in larch logs, similar to those that punctuate the façade behind. Visitors reach the wellbeing area via a suspended walkway, which at the same time opens up to the newly constructed relaxation area, offering space for up to 27 people. On the platform, individual microstructures with gabled roofs accommodate the functional programme on two levels. A surprising element is the lower level, where the horizon undergoes a 180° rotation, and the huts appear to be anchored upside down. 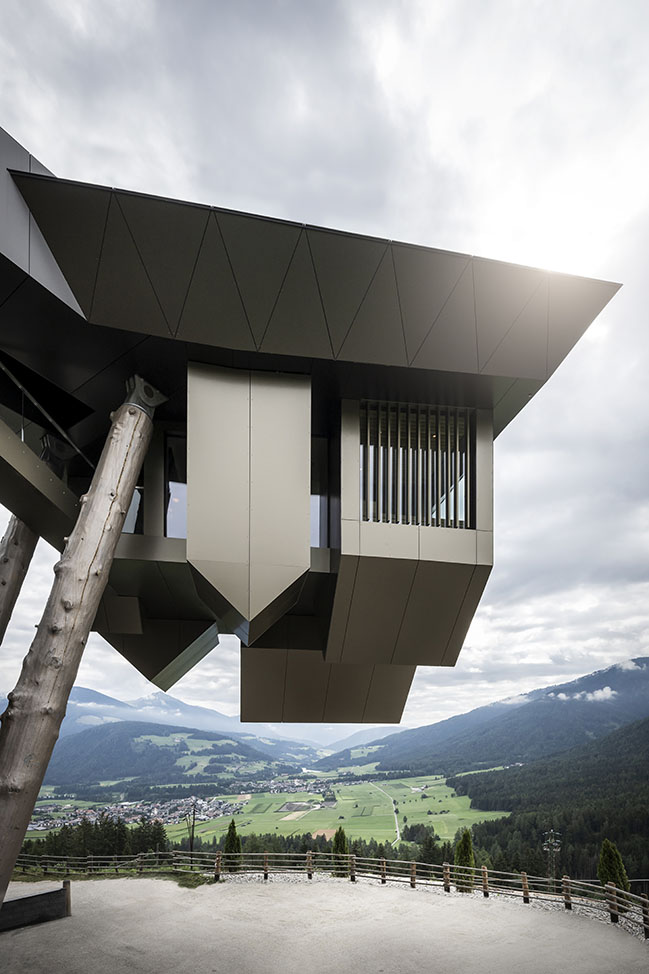 The two levels are characterised by a different treatment of privacy, with mainly exposed spaces above and protected spaces below. On the upper floor are two whirlpool baths, two panoramic showers and a changing room. The lower floor is a textile-free area: the central, enclosed part houses the foyer. From here one has access to the soft sauna, the Finnish sauna, a shower cabin, an ice mist shower and a third outdoor pool, from where one's gaze can sweep over the surrounding landscape. 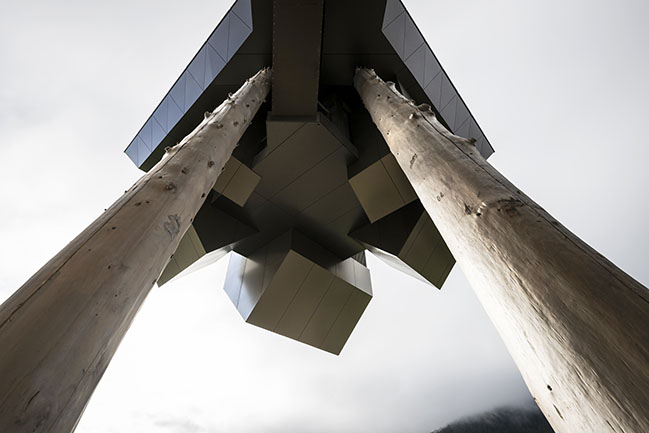 "The lower level of the platform causes a feeling of estrangement in the observer. As one descends, the temperature rises, and the environment becomes more protected. It feels like a descent into the centre of the earth, with the poles reversing,' sums up architect Gottfried Gruber, who supervised the project. 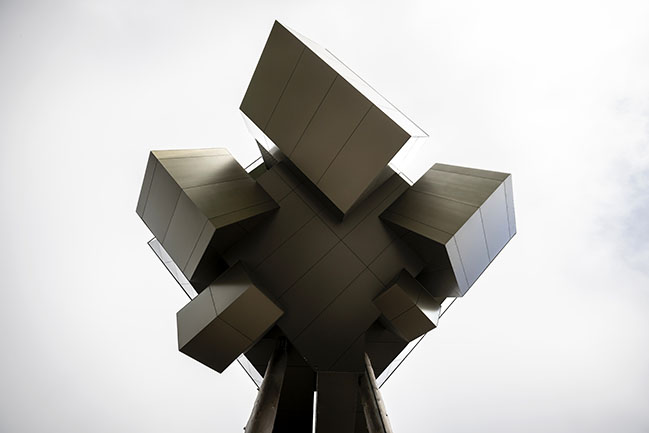 The decision to work with inverted pitched roofs is a choice motivated by formal and functional reasons: on the one hand, the desire to reproduce the architecture of a mountain village, and on the other hand, the practical need to allocate in the inverted roof the water purification system in the case of the swimming pool and the seating tiers in the case of the sauna. Moreover, the offset of the huts and the alternating orientation of the roof ridges allow a 360° view of the landscape, the real centrepiece of the project. 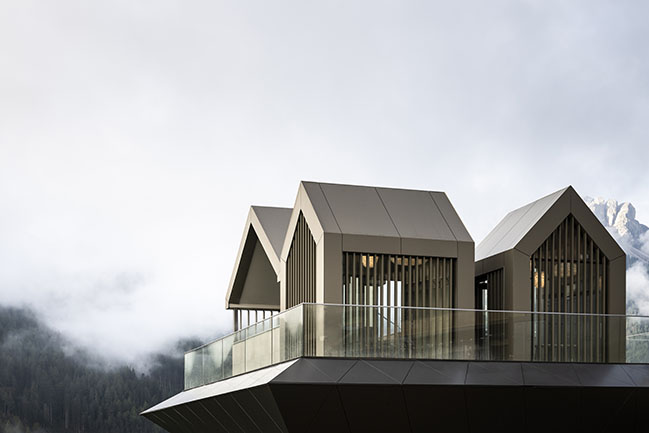 The choice of colours and materials is in harmony with the mountain scenery: aluminium panels in natural brown tones clad the cabins, as well as the thickness of the slab, which is formed by a steel load-bearing beam structure. The brise soleil system that screens the windows is also of the same material and colour. The floors are light beige ceramic, while the floor is oiled white oak in the relaxation room. 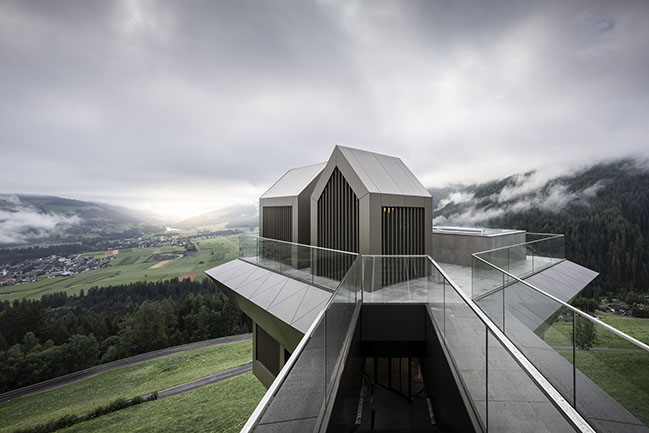 In this new assignment, noa* has been able to revive the imaginative drive from which Hubertus was born, designing a platform that, with its 20-metre overhang, marks a new floating outpost between heaven and earth. A project where the force of gravity seems to vanish to make way for unexpected scenarios. 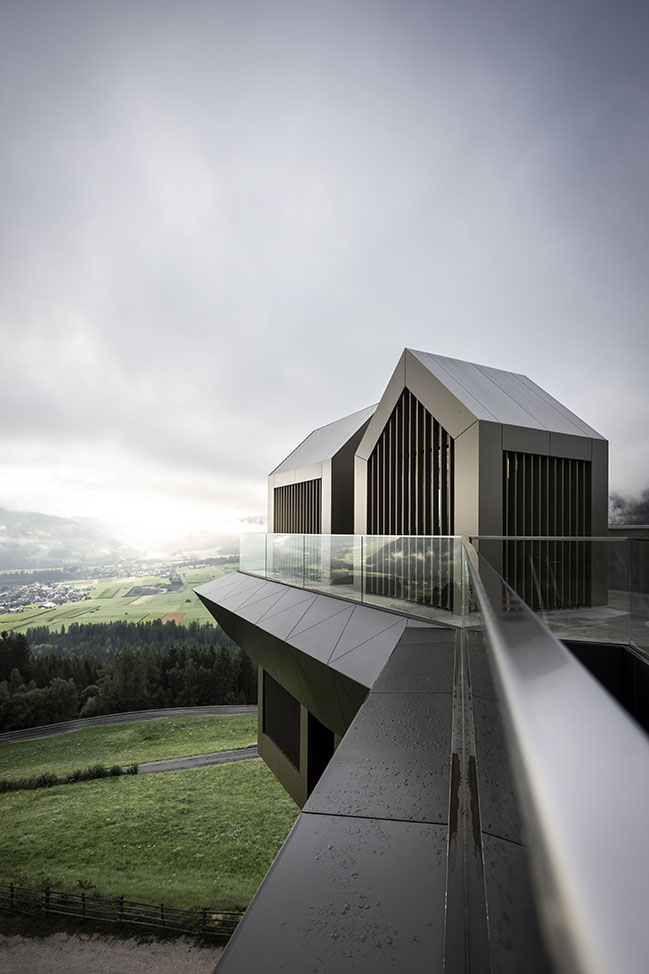 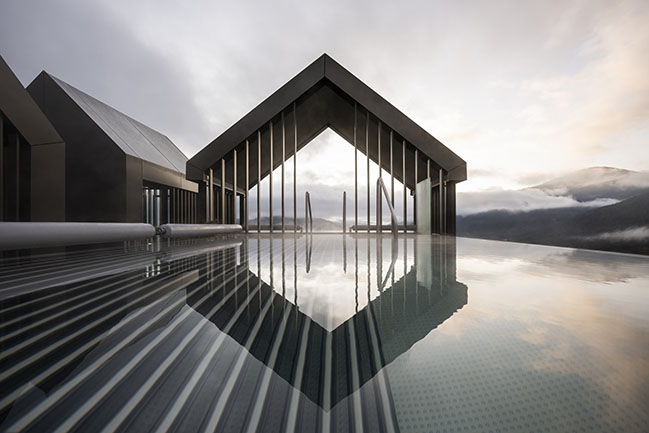 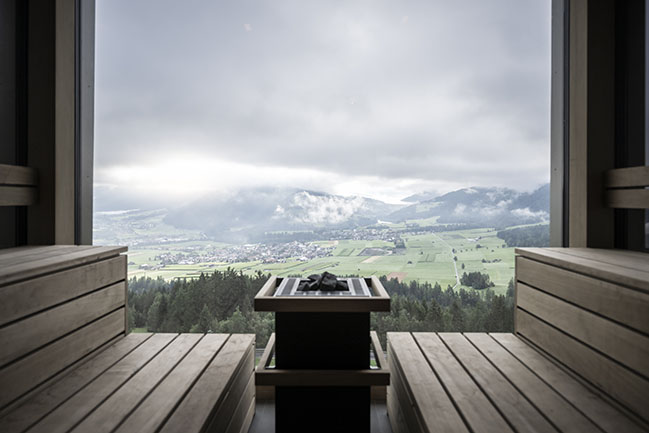 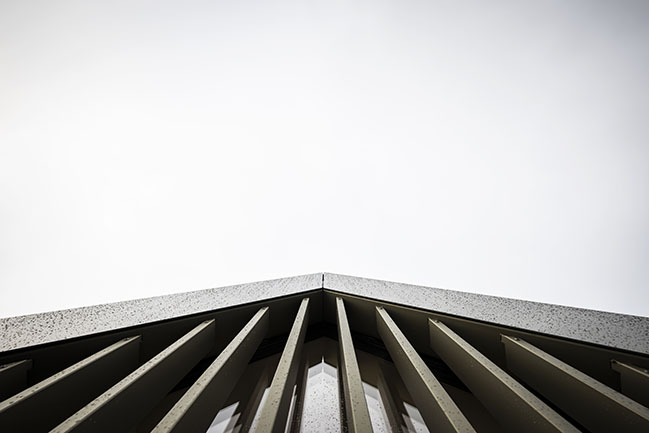 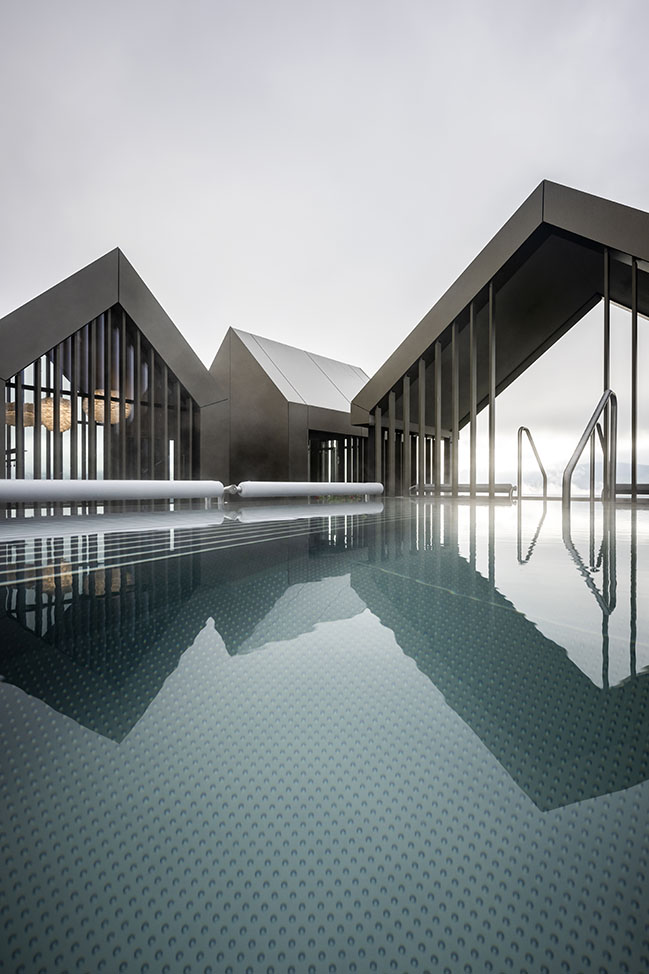 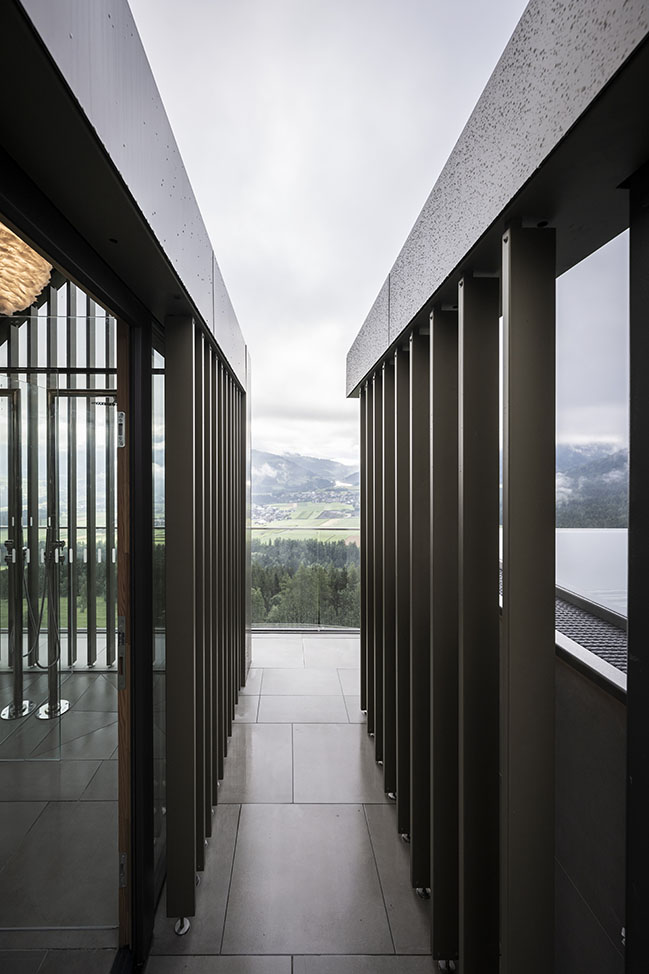 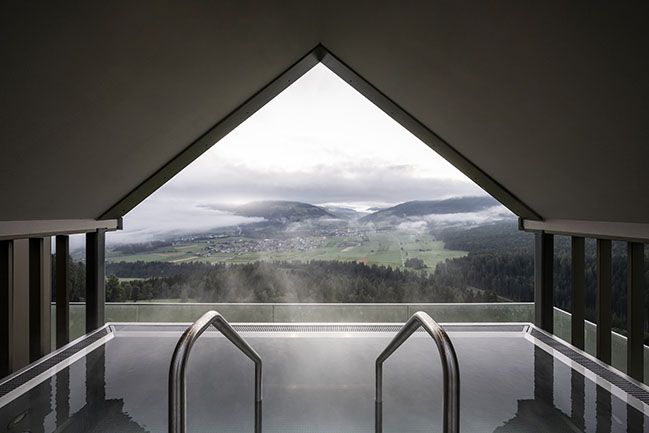 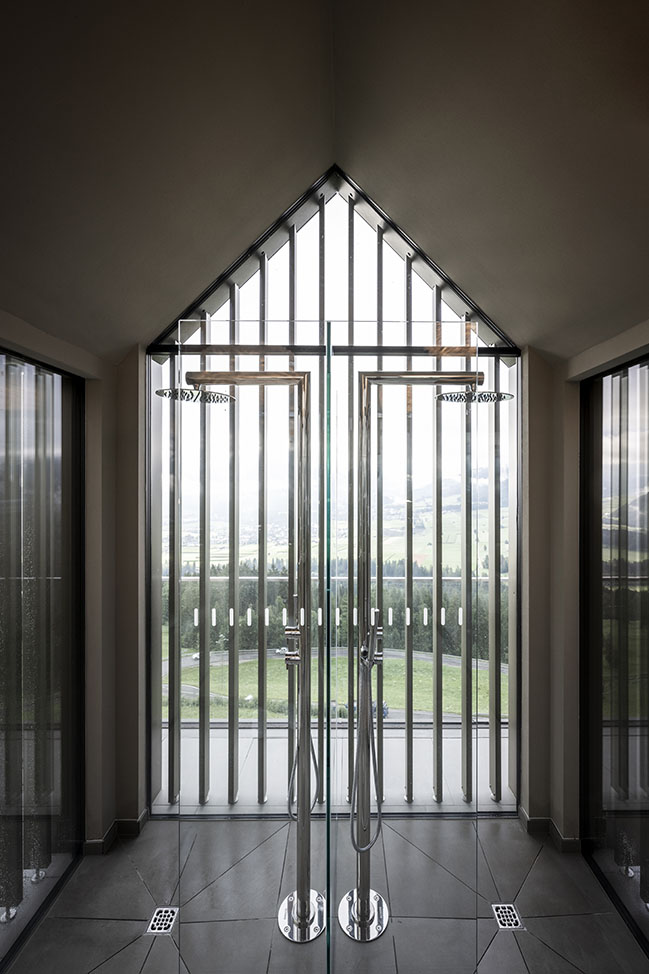 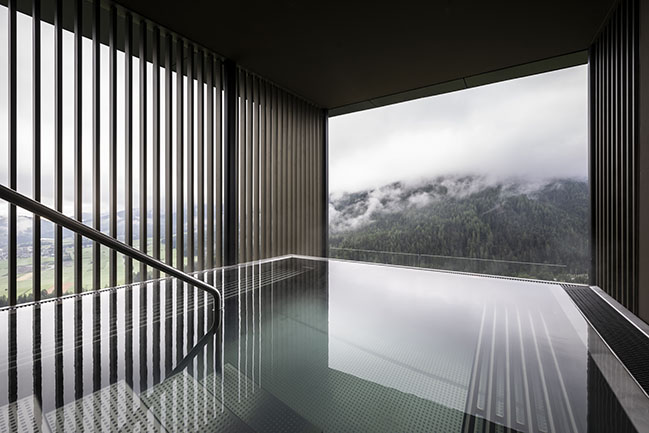 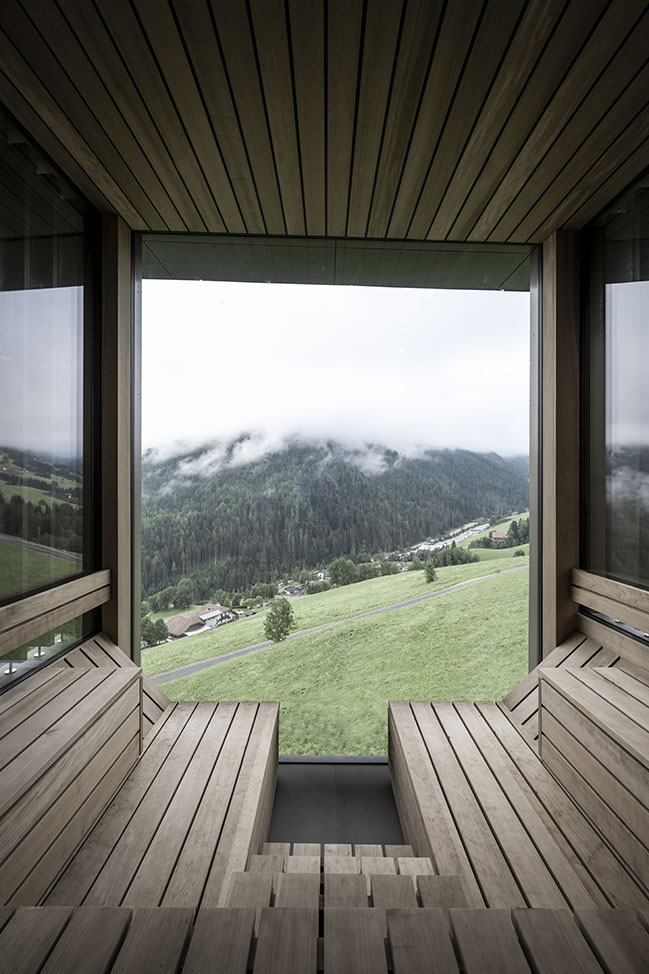 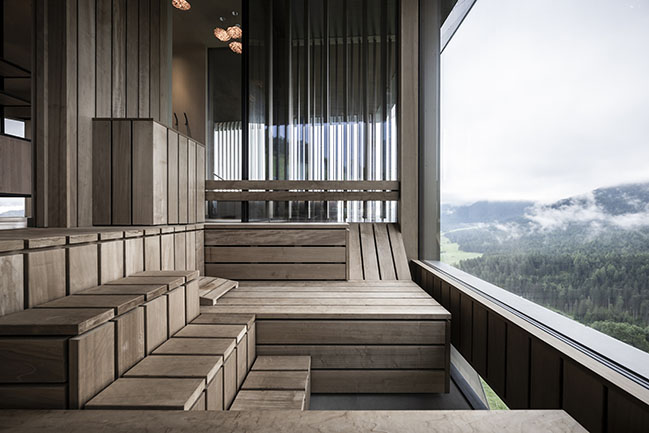 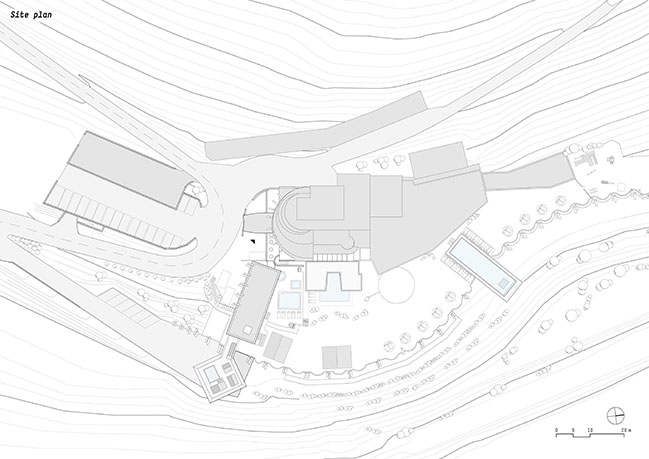 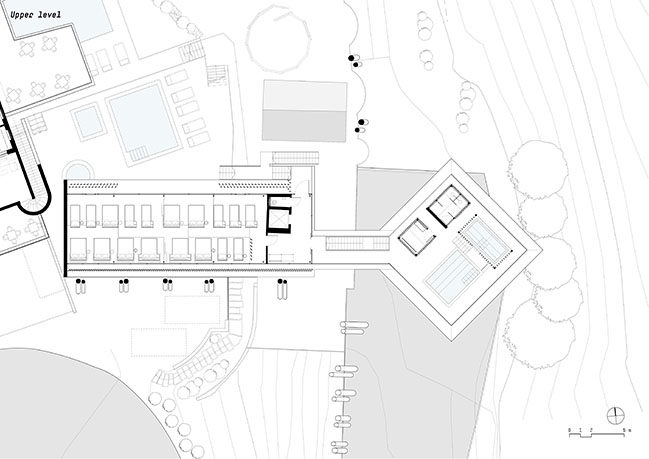 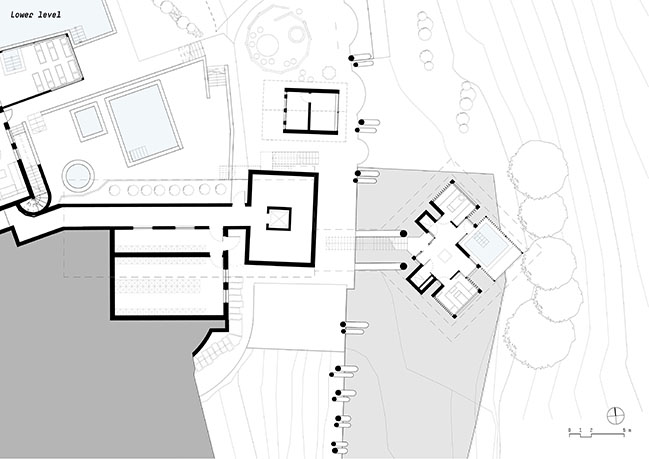 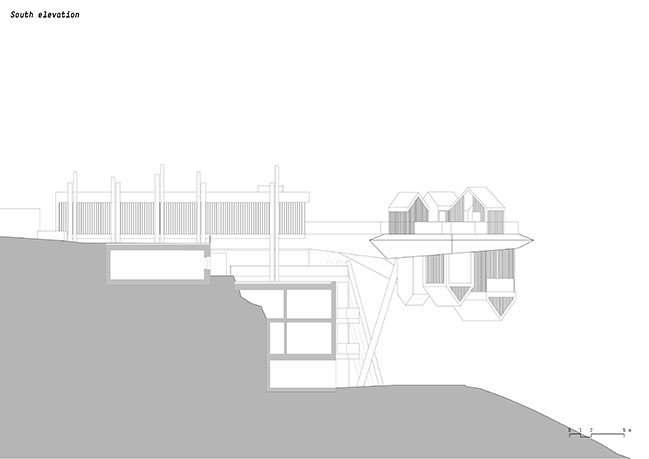 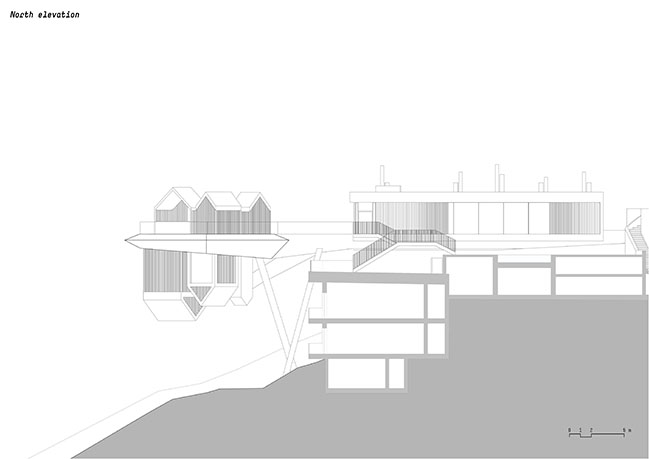 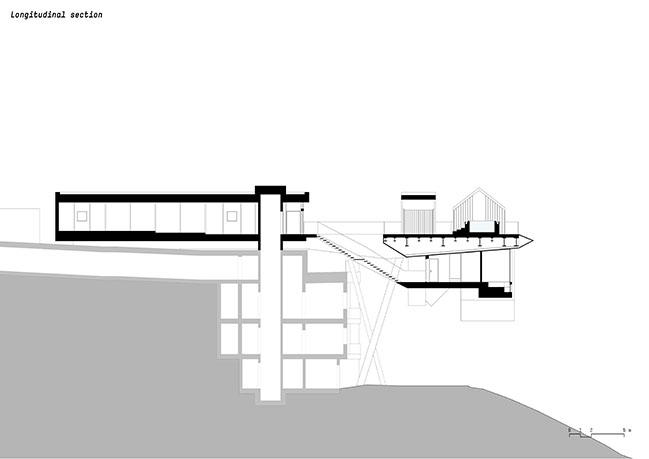 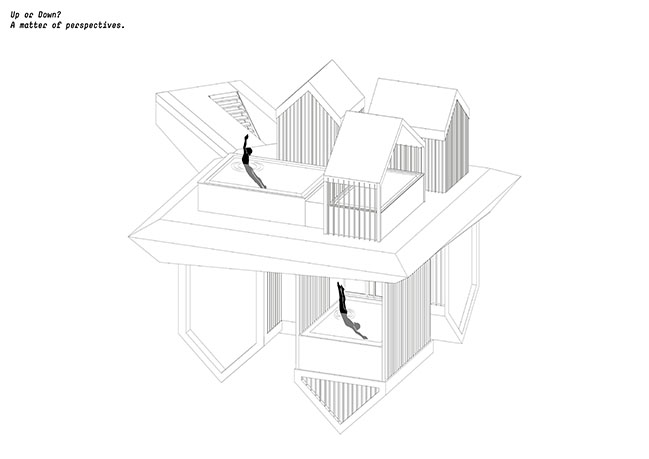 Hub of Huts by noa* | The village upside down

09 / 20 / 2022 For its latest South Tyrolean realisation, noa* returns to Hubertus in Olang, one of the first places to have revealed the studio's expressive power...

Recommended post: Powered by Ulsteinvik by Kaleidoscope Nordic was selected as the winner of Architizer A+Awards 2021