Recently, the Brabant, The Netherlands, branch of the globally operating Lan Handling Technologies moved into a brand-new building designed and realized by cepezed. 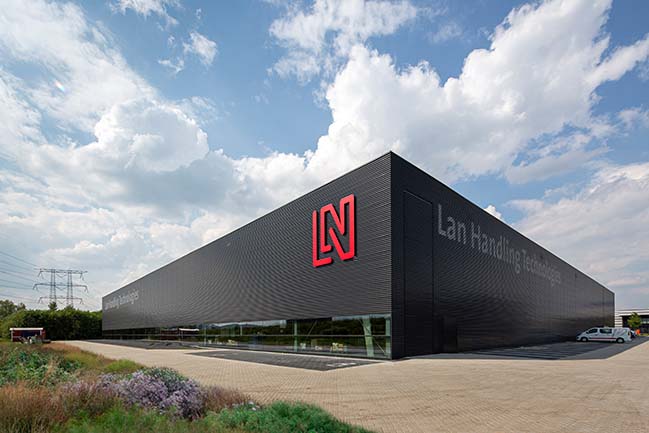 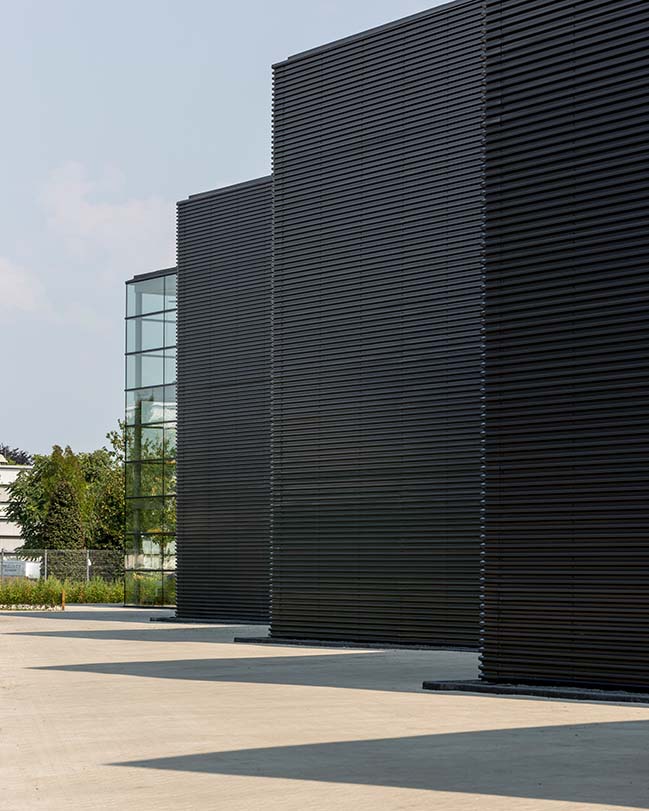 From the architect: For their new housing, cepezed assisted the company in terms of both architecture and construction as well as process. For instance, the office contributed to the choice of location, provided counsel on the procurement of the plot and conferred with the municipality on the possibilities of the zoning plan. 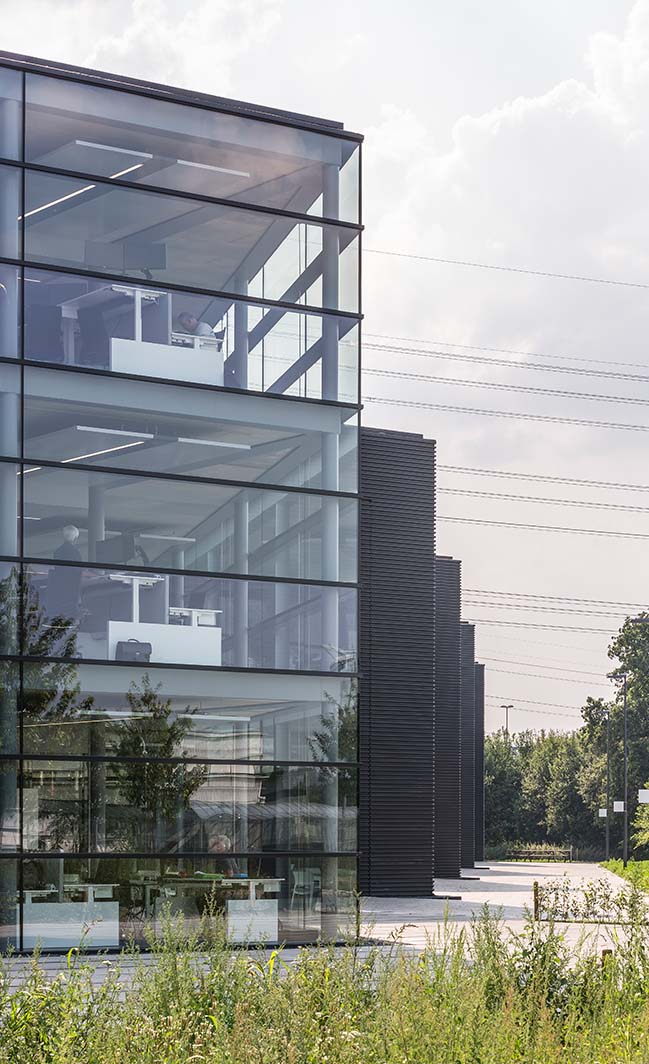 The architecture and interior disciplines drew up an integral design, for which cepezed also contracted and coordinated all other consultants such as those for stability, MEP & HAVAC, construction physics, fire safety and costs. cepezedbouwteam, the construction branch of the cepezed brand, arranged for the realization; without the use of a main contractor, it engaged, coordinated and supervised the different construction specialists for the client. 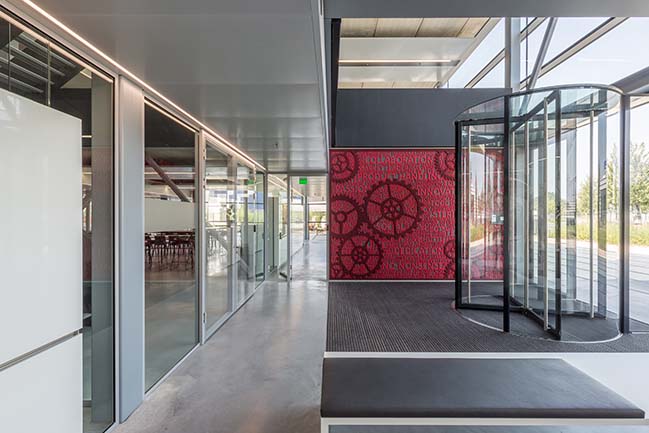 The close cooperation between the different cepezed specialists has resulted in a custom building for the price of a standard solution. Within the budget available, Lan now has a maximum equipped, state-of-the-art housing at its disposal. 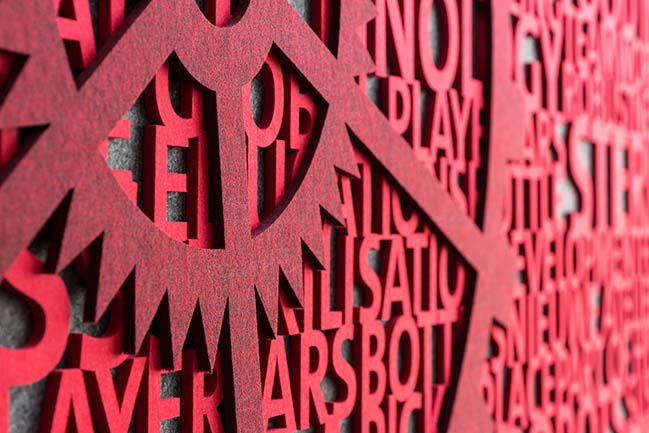 Lan is specialized in the design, assembly and set-up of handling and packaging systems for the food, pet food and pharmaceutical industries. Previously, the Brabant (a Dutch province) branch used to work from two rental properties at different locations in Tilburg. These had become too small, while they no longer met contemporary needs either. 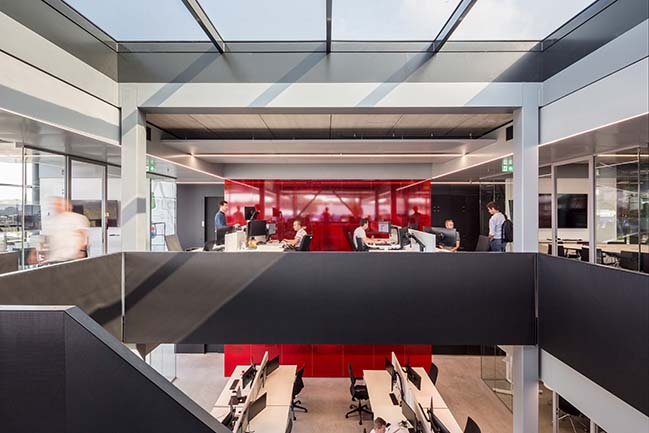 The opportunities offered by the development of an own building ware therefore seized to fulfill other wishes in addition to sufficient space. For example, the new accommodation offers better workplaces, strongly contributes to the business efficiency and is an integral part of the company’s appearance. With the new accommodation, Lan is now completely future ready. 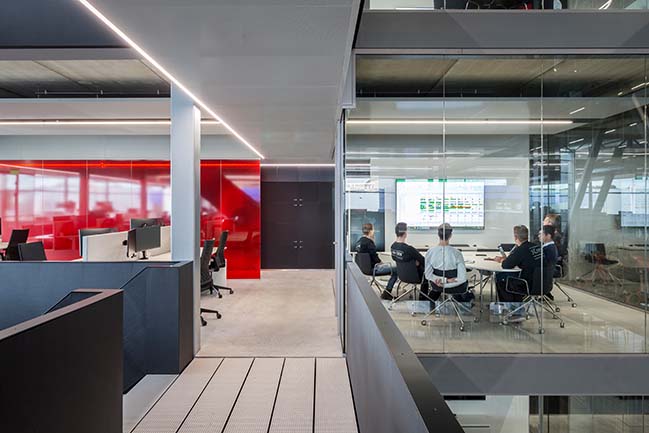 open and efficient
The new building is situated on the Loven Noord industrial area in Berkel-Enschot, directly adjacent to the Tilburg ring road. The new housing is more efficient if only because the former Brabant business units are now brought together. But there is more. While the existing buildings had an outdated, closed structure, the new construction has an open and transparent character, which facilitates short lines of communication and more direct contact between the designers in the office and the engineers on the assembly floor. 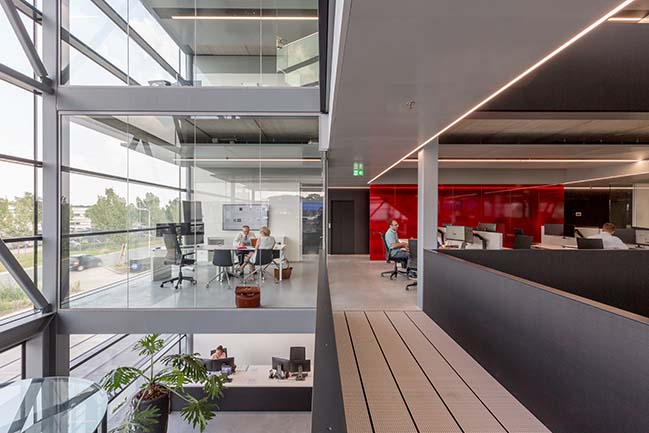 The open and easily accessible set-up is also a tool for communication with customers, including the market leaders in food, pet food and pharmaceuticals. Customers often come to visit and all employees have direct customer contact. The assembly floor also functions as a showroom for Lan’s expertise. The new building is also clearly visible from the Tilburg ring road and thus also serves as a showpiece for passing traffic. 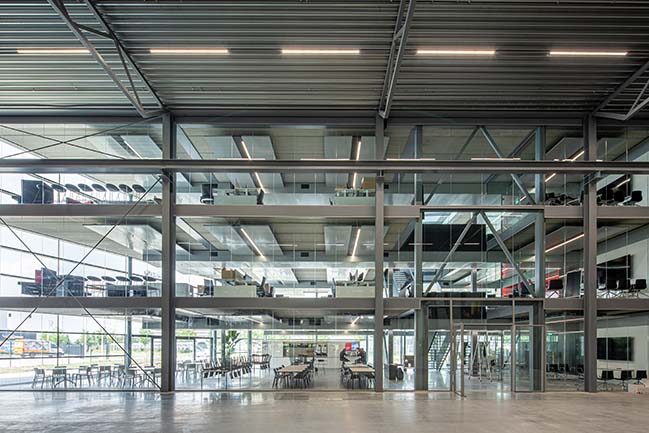 set-up in sections
The new business premises include 1,500 m² of office space and 5,000 m² of halls. The design is importantly determined by the plot, which roughly has the shape of a rectangular triangle. Along its outer edge, there is a one-way traffic ring including parking spaces and options for dispatching. For what remains, the plot is completely filled. The building itself is composed of five connected naves. These are each more than 10 meters high and 18 meters deep. In length, they run back from around 88 to 24 meters. As a result, the building has a saw-tooth structure along the slanting plot side. The overhead doors for dispatching are integrated here. 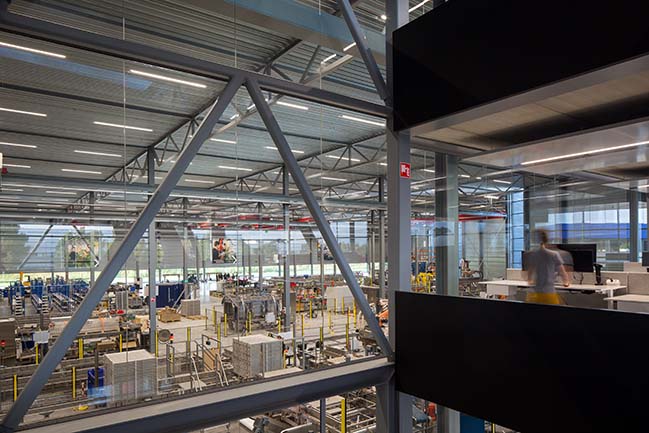 The shortest building nave is situated along the access road of the business park and contains the offices. On two sides, this three-layer volume is equipped with fully glazed façades. The majority of the office spaces consist of open floor fields that have direct visual contact with the assembly hall. The ground floor includes the canteen and the closeable offices for confidential functions. In addition, the office volume includes spaces such as team rooms, rooms for conference calls and instruction rooms for customers. A spacious void is included as well. Along the long straight side of the triangle lies a facility zone with functions such as the toilets, technical rooms, changing rooms and lockers. This zone is strongly connecting and creates unity between the halls and offices. 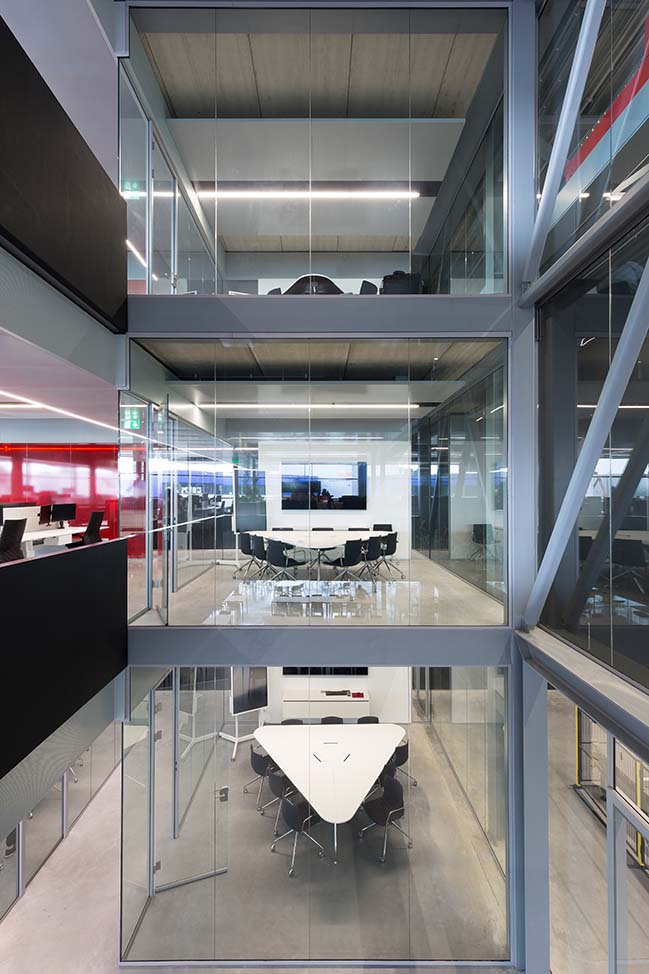 The halls consist of the other four naves and each contain a production street. The differences in length render the halls and production streets well suited for working on orders of different sizes. The façades of the halls are largely closed, but still receive ample daylight through the office nave and partly transparent façade strips. The halls are also well prepared for changing work processes. In the future, when Lan might increasingly assemble its systems on location at the customer’s premises, the halls are easily usable for other purposes such as storage. In such a case, they can also be rented out separately. 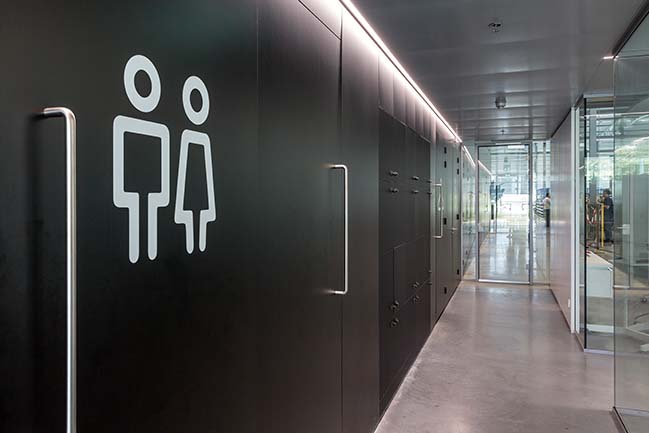 cool corporate appearance
The new building has a down-to-earth, but high-quality appearance that suits Lan well. The façade finishing of black profiled sheets is sleek and modest, but with sophisticated detailing. The high, industrial overhead doors are elegantly concealed behind the cladding.

The interior is kept austere and basic; it has a refined, but cool and robust appearance. A sprinkler system does away with the need for fire compartments, which makes that building can actually be as open as possible. The facility zone along the long side of the building has a black wall finish and thus reflects the dark exterior façade. The office floors are of polished concrete and the furniture is white, which contributes to the light atmosphere. Transparent red partition walls between the office floors and the facility zone form a powerful color accent that matches the color of the Lan logo.

The modest design, sleek styling and striking façade signing also tie in with those of the other companies within the listed Hydratec, Lan’s mother company. On a corporate level, the new construction thus contributes to a recognizable branding as well. In a similar style, cepezed previously also designed the accommodation for Pas Reform, another Hydratec company. In 2012 that accommodation was elected Best Building of the Year Region East by the Branche Association of Dutch Architects (BNA). 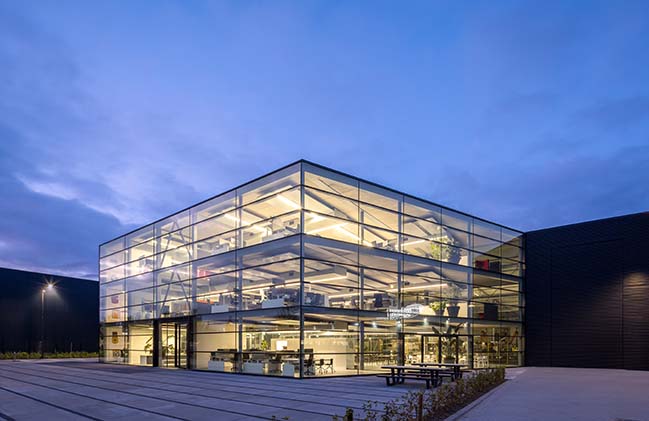 YOU MAY ALSO LIKE:
> Town Hall Woerden by cepezed
> Station of the Future in the Netherlands by UNStudio

09 / 27 / 2019 Recently, the Brabant, The Netherlands, branch of the globally operating Lan Handling Technologies moved into a brand-new building designed and realized by cepezed...