Portsoken Pavilion, a sculptural monocoque structure by Make Architects, has been unveiled as part of the City of London Corporation’s transformation of a former gyratory into a high-quality public space. 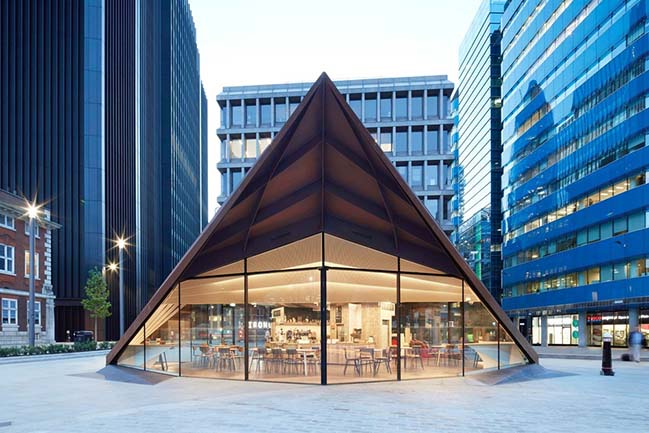 From the architect: The former complex roundabout, with its series of pedestrian subways, has been the subject of intense development for over six years to reroute roads, block off unsafe subways and transform the area into the new Aldgate Square—one of the largest public spaces in London’s Square Mile. 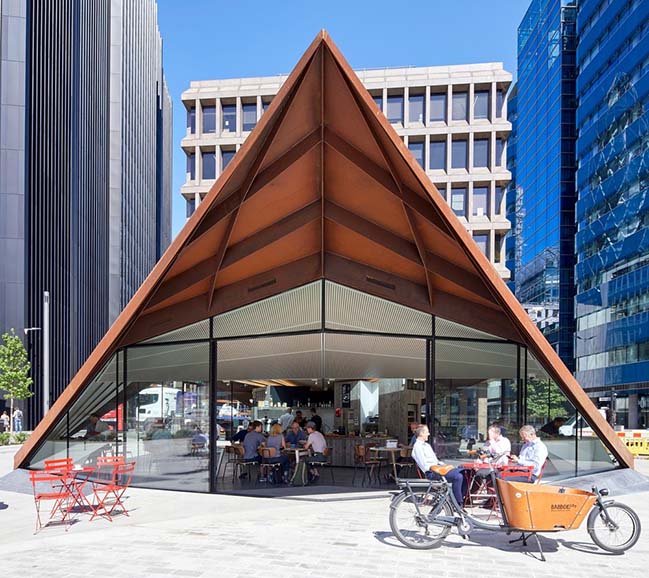 The pavilion, which will be run by local social enterprise Kahaila as a café and multifunctional community space, sits proudly in this new landscape, delivering a public amenity as well as improving the connection between the two distinctive listed heritage buildings that sit either side of the new square: the St Botolph without Aldgate church and Sir John Cass’s Foundation Primary School. 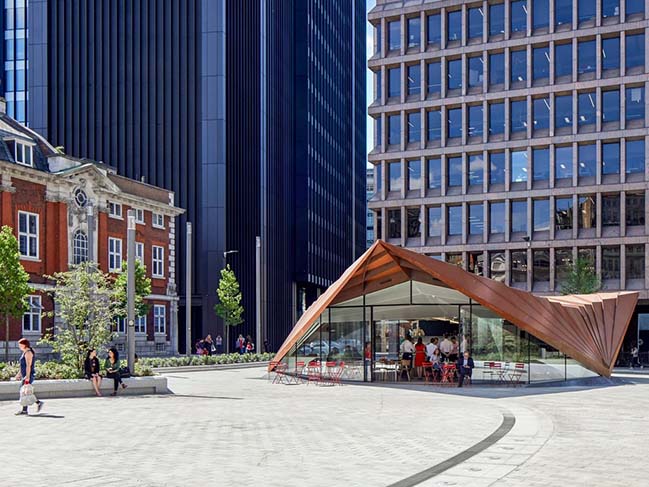 It is the second in a series of pavilions planned by the City of London Corporation and was required to have an aesthetic relationship with the first, RIBA Award-winning pavilion, the City of London Information Centre adjacent to St Paul’s Cathedral, which was completed by Make in 2008. 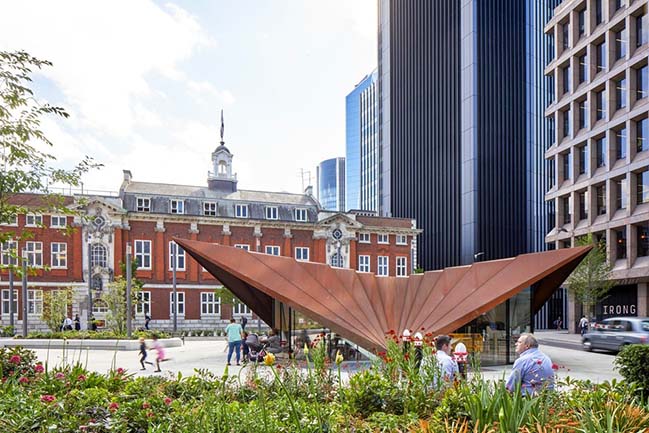 Sarah Shuttleworth project architect said: “The final scheme is beautiful—distinctive, yet respectful of the heritage architecture surrounding it. It provides a bespoke civic amenity and the ambition and determination of the City of London Corporation to persist and deliver the square and the pavilion—despite the challenges—in order to transform this parcel of London for the benefit of the local community, should be applauded.” 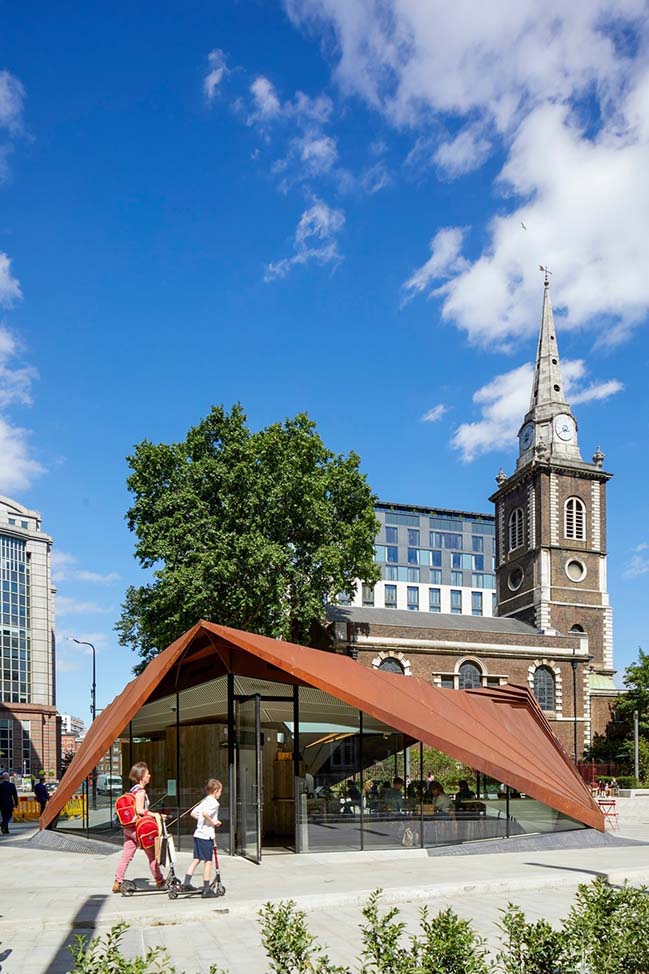 Chris Hayward, Chairman of the City of London Corporation’s Planning and Transportation Committee, said: “It’s been an absolute pleasure to see a gyratory which reflected 1960s traffic planning, brought into the 21st century. With the imminent arrival of the Elizabeth line, it is the number-one priority that our infrastructure is fit for purpose. More than ever we are seeing businesses focusing on local amenities and making location decisions based on the quality of public realm that they can offer their employees. The completion of the square marks a step change to the area, demonstrating to investors that they should continue to commit to the City’s world class public realm.These were ambitious plans but it is only right that we deliver a healthy, inclusive environment for the diverse residents, school children, visitors and workers in Europe’s leading business district.” 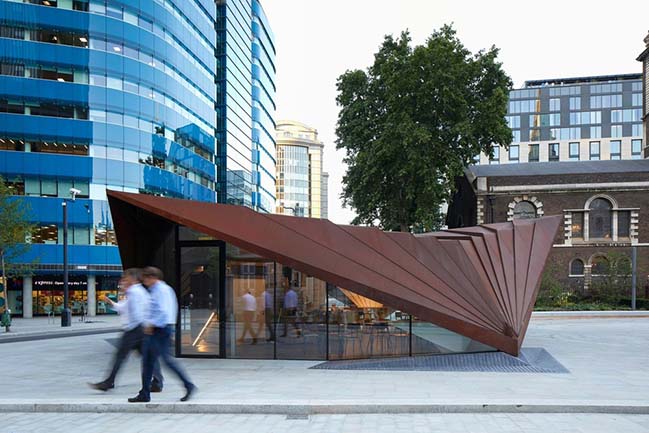 This latest pavilion picks up on the asymmetrical angles of the City of London Information Centre with an angular structure that folds down to meet the ground at just three triangular support points, with glazing in between. Corten cladding panels form a rigid structural skin covering the pavilion and create a faceted surface that reduces the overall profile of the pavilion and provides its character. The channels created by the layered cladding are also functional, allowing the rainwater to run down them into discreet drains located where the steel meets the Yorkstone paving. The warm tones of the weathered steel chime with the brown brick of the Grade I-listed church and the red brick Grade II-listed primary school. Over time the steel will darken and provide an earthy, complementary counterpoint. 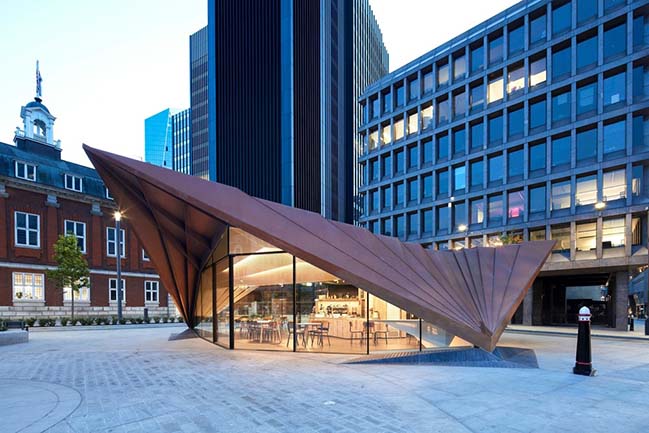 Designed parametrically, the pavilion’s form has been carefully designed with respect to key pedestrian approaches to the new square. As such, it has no backside, and its three glazed elevations face Duke’s Place to the north-west, Houndsditch and St Botolph Street to the north-east, and the new square and Aldgate High Street to the south. These elevations provide clear views into and through the structure and deliver natural surveillance, as well as entrances into the pavilion on all sides. 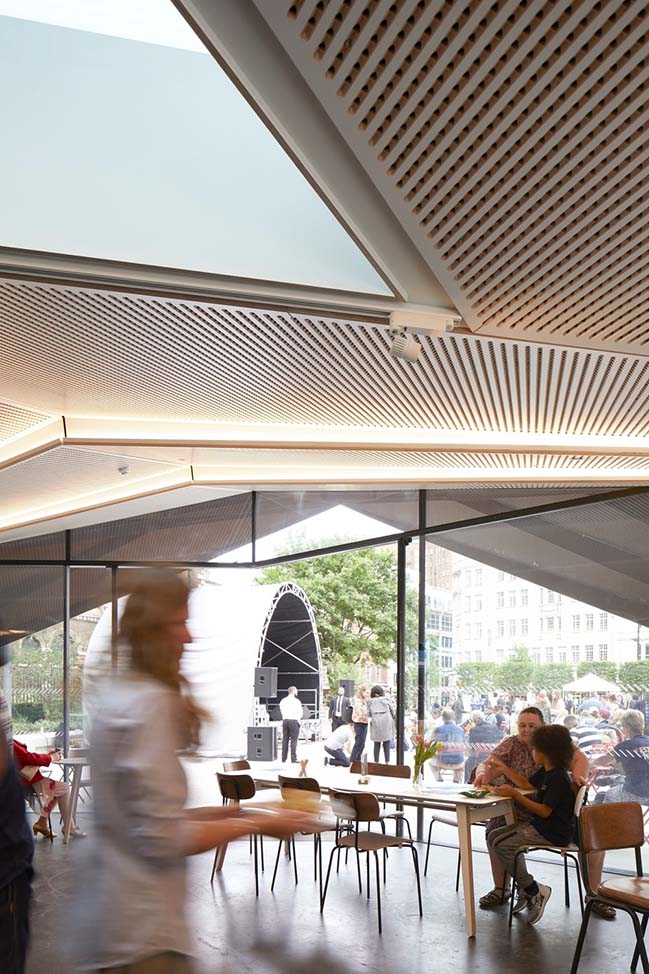 Internally the bands of the cladding are mimicked on the soffit, with layered geometric white laminate timber panels, which have punched slots to aid the acoustics and add drama when up-lit at night, providing a glowing effect to the whole building. Two large asymmetrical rooflights sit over the central counter to draw light into the building. Outside, the roof overhangs the glazed doors on all sides to allow seating to spill out and provide a seamless transition between inside and outside. It is designed to be as flexible as possible and become a real hub for the community—a space that could work as a café, for exhibitions, for community meetings. 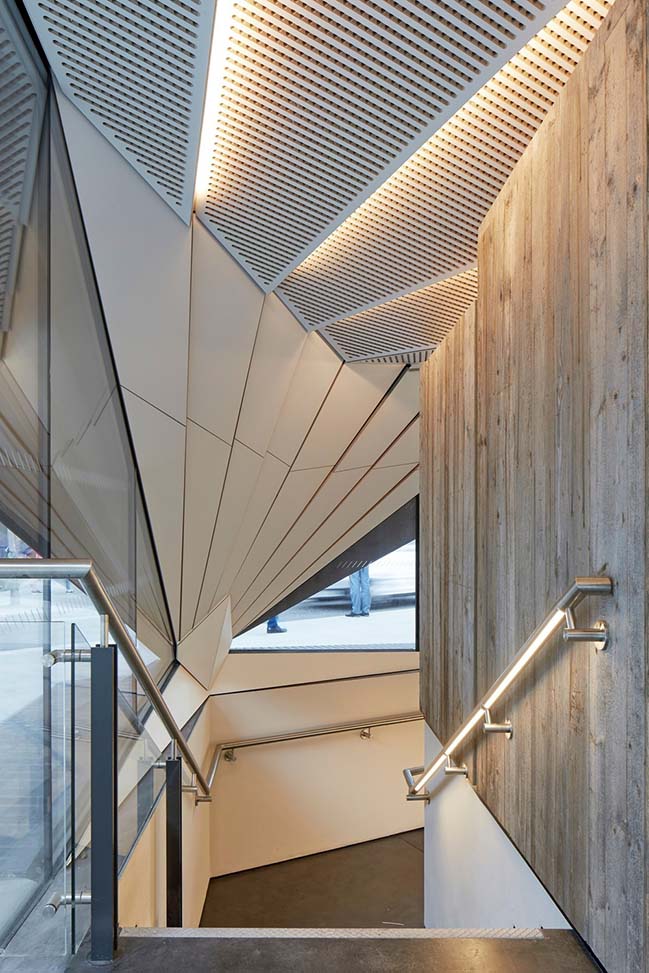 The 325 sq m building is a single storey above-ground but has utilised part of the former subways to accommodate a basement level for plant, back-of-house facilities, kitchens and toilets, this has significantly reduced the quantity of land that was needed above ground and therefore delivered more public space for the gardens. 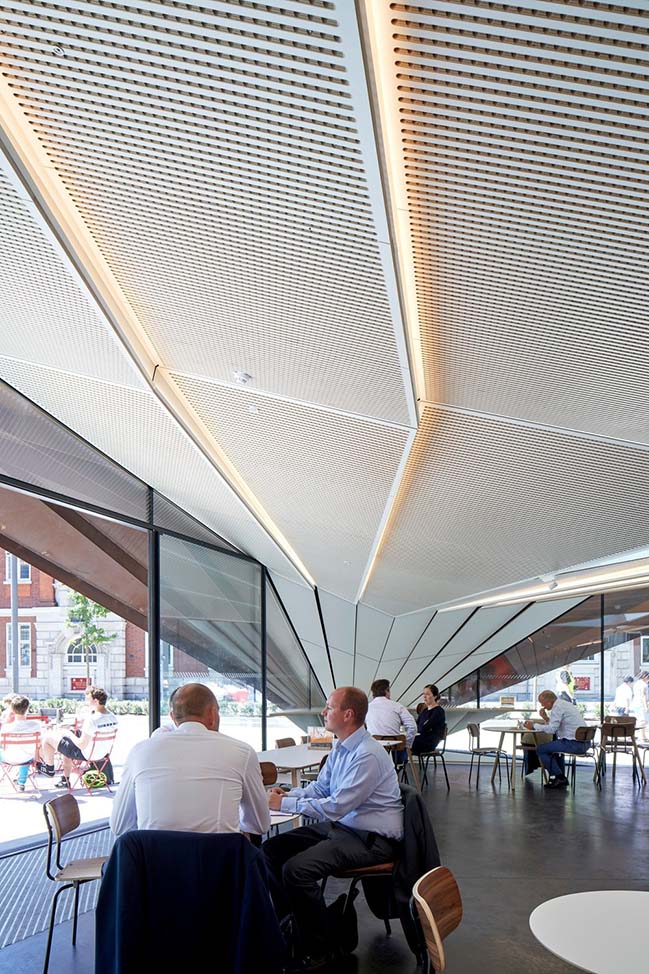 The constant temperature of the concrete tunnels also works to help regulate the temperature of the building, air is drawn through the tunnels and up into the café, heating in the winter or cooling in the summer. The large overhangs on the roof were also attuned to the orientation of the sun and provide solar shading to the interior at peak times of the day. 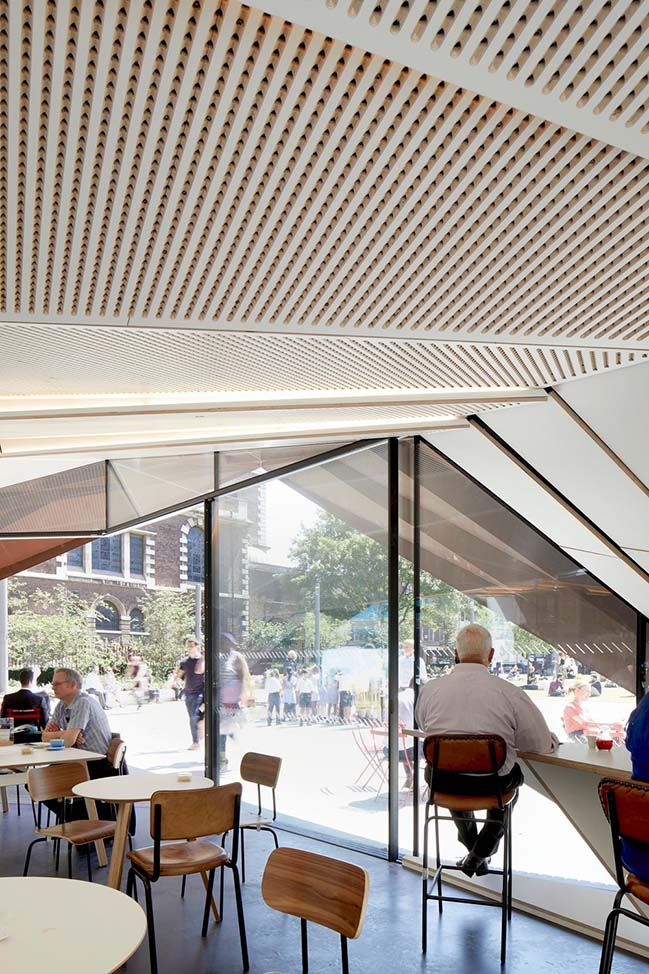 The entire structure was prefabricated off-site by Littlehampton Welding and then taken apart and allowed to rust while the site was prepared by contractor Kier. It was brought into site in pieces and reassembled and welded in situ. After the structure was in place and all the on-site structural welds complete, the underside of the steelwork that would form the internal space was sprayed with 150 mm of insulation to minimise heat loss and remove the possibility of condensation forming on the internal face of the steelwork. 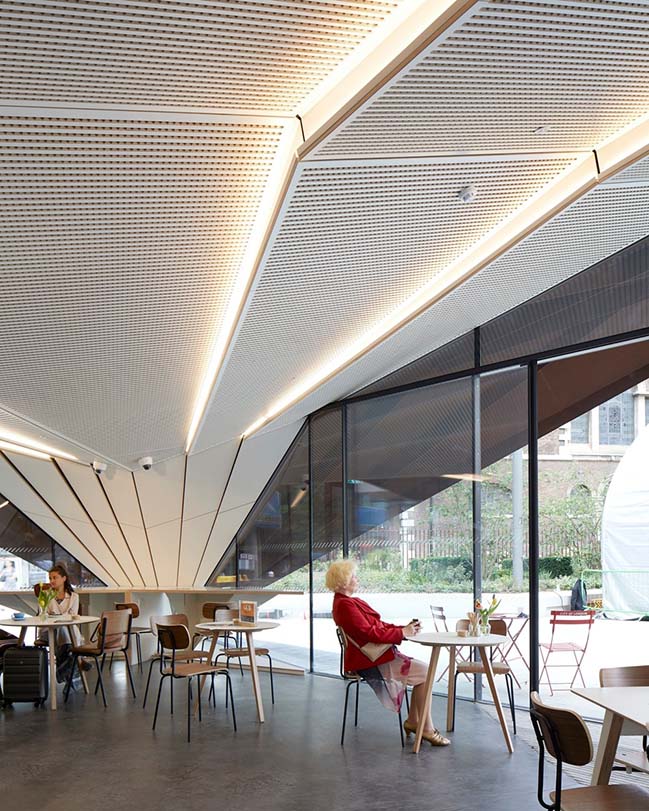 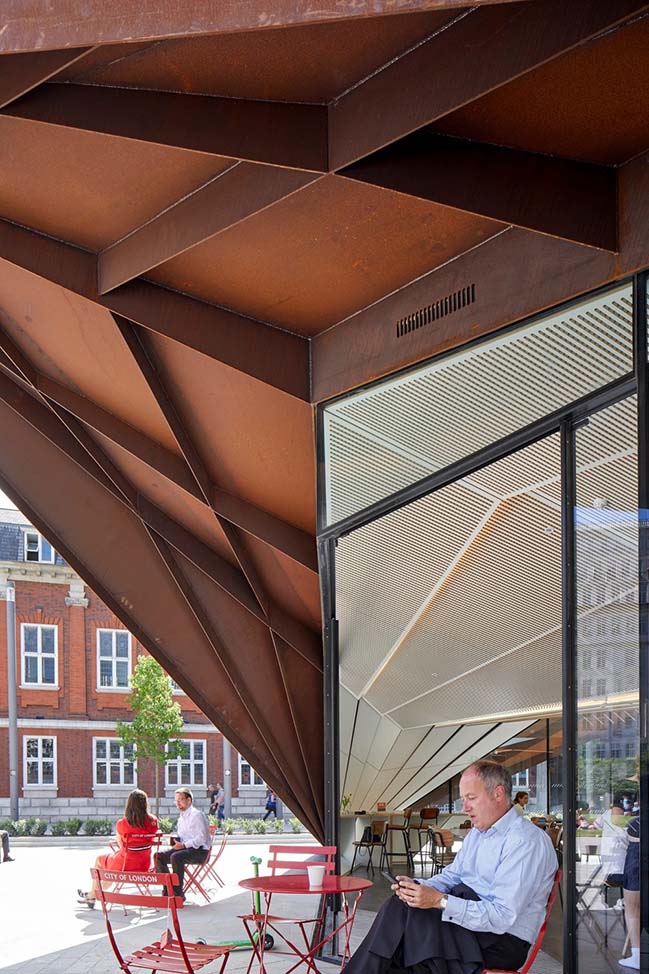 > You may also like: The London Mastaba by Christo and Jeanne-Claude 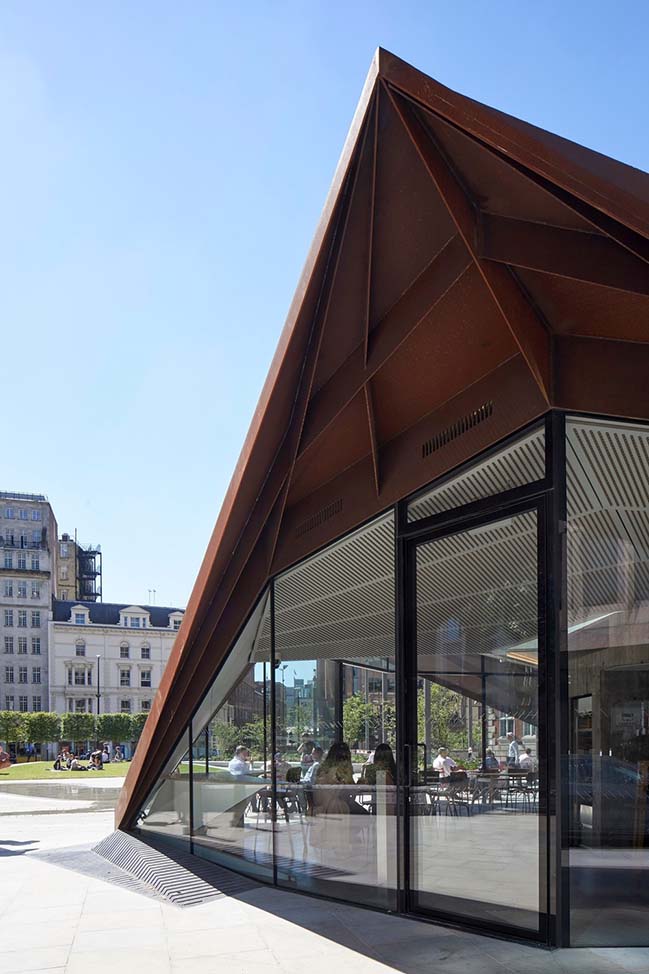 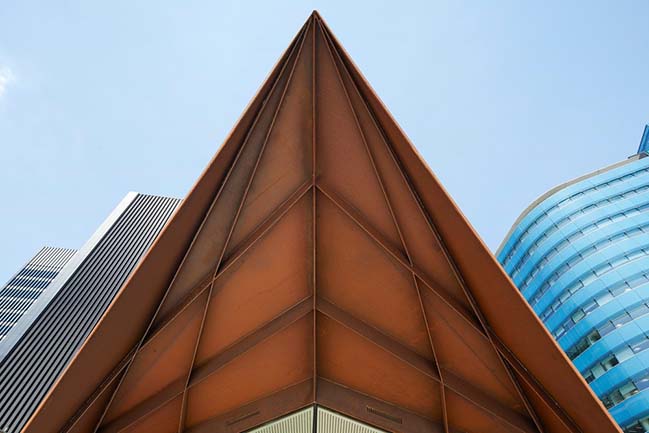 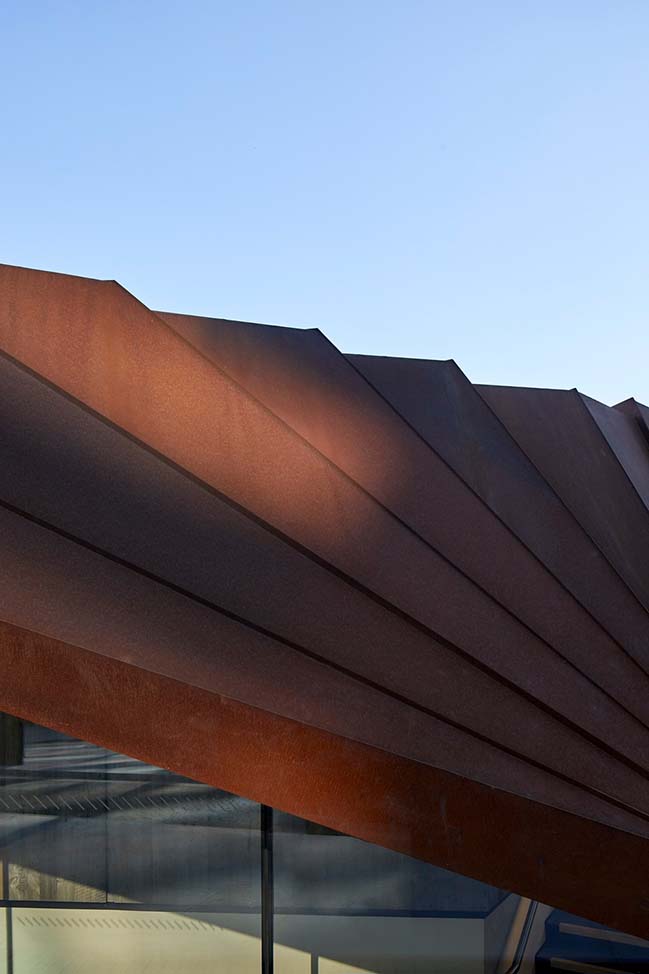 > You may also like: Centre Point Tower London by Conran and Partners 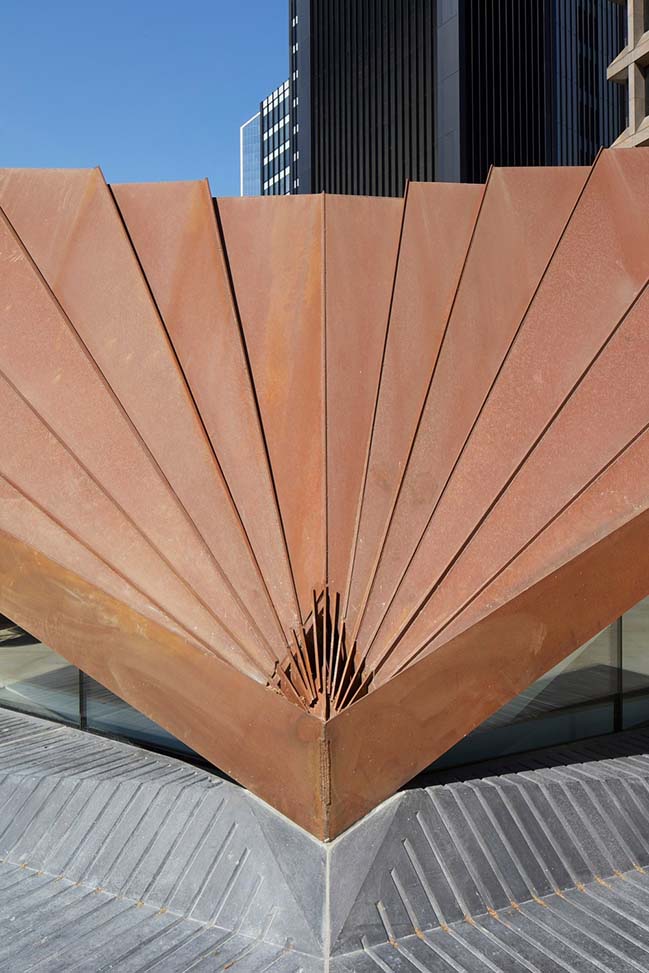 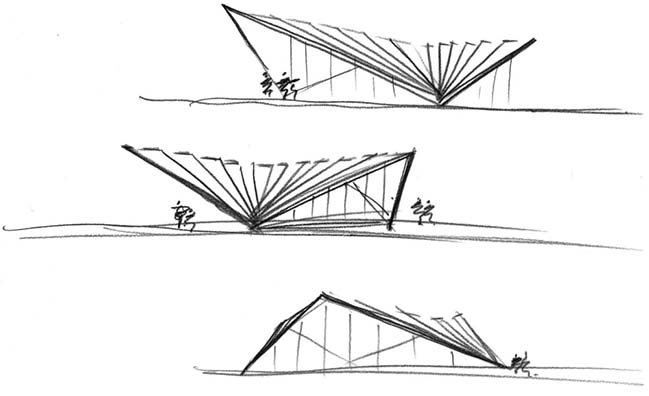 > You may also like: Make Architects launches Rathbone Square

07 / 15 / 2018 Portsoken Pavilion, a sculptural monocoque structure by Make Architects, has been unveiled as part of the City of London Corporation’s transformation...