The first national institution dedicated to honoring U.S. veterans and celebrating their service opens the doors to its home, designed by Allied Works Architecture, on October 27, 2018. 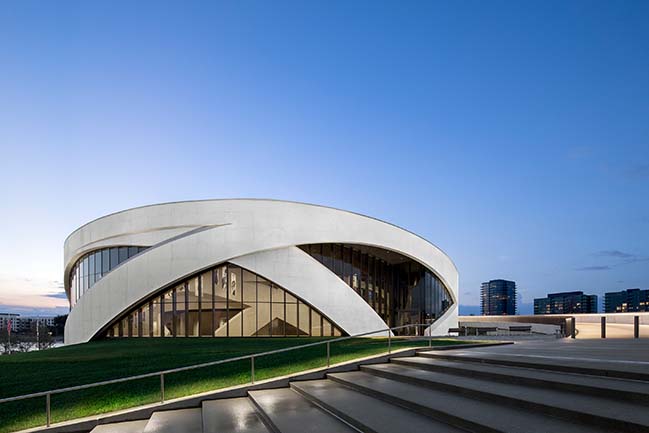 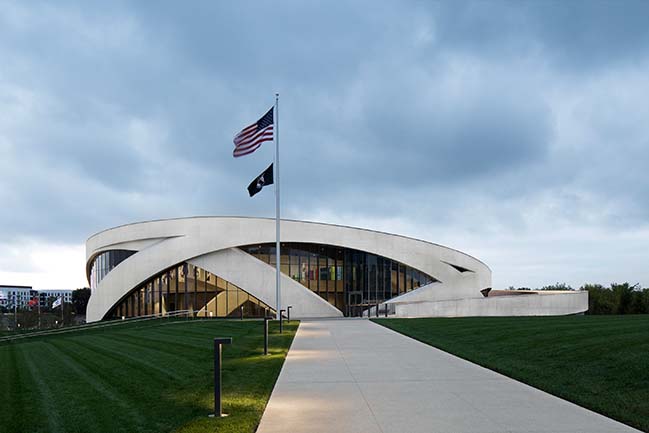 From the architect: Neither a war memorial nor military museum, the National Veterans Memorial and Museum (NVMM) is a civic and cultural institution that seeks to interweave the role of veterans and the act of service within a broader national context. Located in downtown Columbus, Ohio, the new 53,000-square-foot building unites architecture and landscape in one gesture as it creates an iconic, new civic space to tell the story of veterans on an individual and collective level.

“It has been an immense privilege to help realize the vision of late Senator John Glenn in the creation of our country’s first museum dedicated to service,” said Brad Cloepfil, founding principal of Allied Works. “Our design for the museum and memorial helps to articulate the intention of this new institution through its very form, transforming the land itself into a monument to service and into a community gathering place fostering conversation and commemoration.” 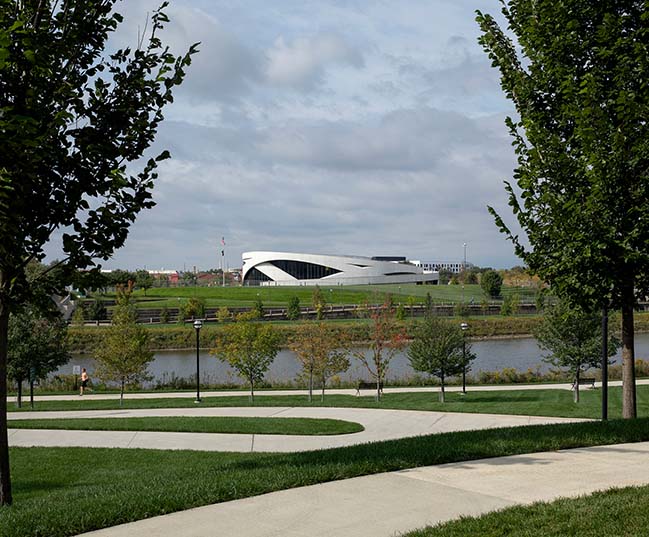 National Veterans Memorial and Museum. Photo by Jeremy Bittermann. Sited on seven acres of land along the banks of the Scioto River, the design of NVMM integrates and lifts the landscape into a sculpted ceremonial space, forming a processional that culminates in a rooftop sanctuary and amphitheater. Intersecting bands of structural concrete, arranged in three concentric rings, give form to the museum and bind the building to the site, holding the exhibitions. Interactive installations inside the museum convey the shared and individual experience of veterans and offer a glimpse of American military service around the world.

“The National Veterans Memorial and Museum will be a crucial touchpoint for the nation through its mission to honor, connect, inspire, and educate visitors about the service and sacrifice of Veterans,” said Lieutenant General Michael Ferriter, U.S. Army (retired), who serves as President and CEO of the NVMM. “When Veterans return home, they join communities as innovative leaders and team plans who want to accomplish the next mission. In its design and program, the NVMM seeks to inspire reflection and remembrance, catalyze nostalgia into action, and amplify civic participation.” 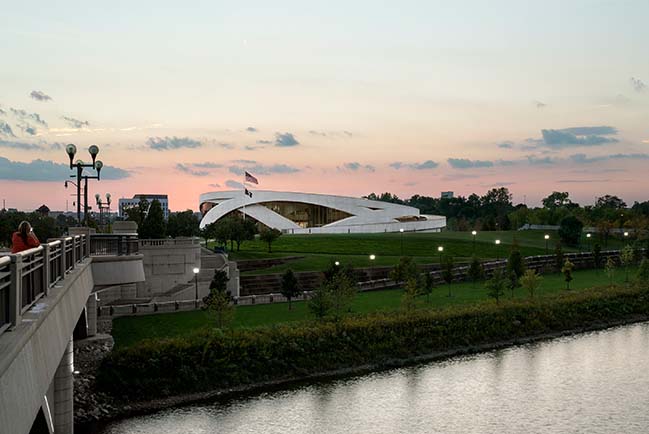 The NVMM is designed as a gathering space for commemorative and civic events as well as a home to a full program of installations and exhibitions. Visitors approach the main entry plaza through a forecourt and pass between two structural concrete arches as they enter the building. Within, the lobby connects to a Great Hall, providing views to the river and downtown, as well as a space for gathering and orientation. 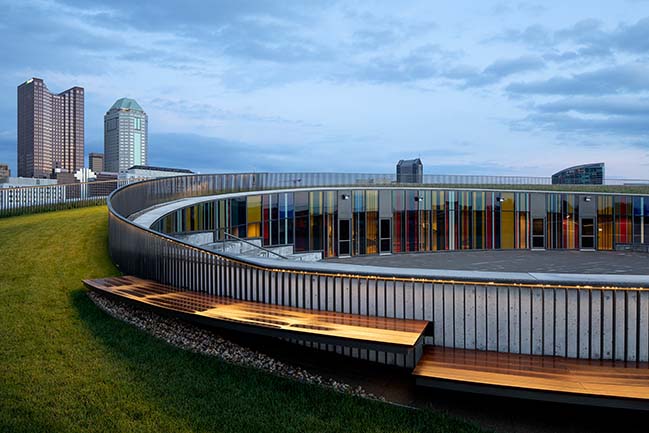 A series of light-filled galleries organized along the building’s perimeter bring visitors on a narrative journey that explores core moments of the veteran experience. Designed by Ralph Applebaum Associates, the exhibits provide a thematic look at the experience of transitioning from a civilian, to a member of the armed services, to a veteran reentering civilian life, as they carve a chronological and thematic path of key historic moments in American history. The galleries lead to a double-height Service and Citizenship Gallery, which reflects one of the foundational pillars of the institution “to inspire visitors to serve their community and nation.” 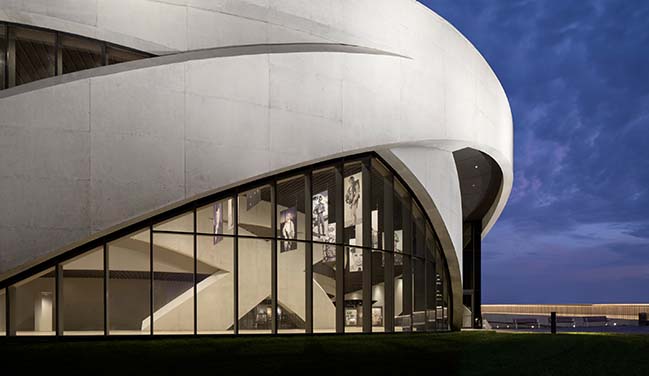 At the upper level, the Remembrance Gallery and Rooftop Sanctuary reconnect visitors to the exterior and the Columbus skyline. Defined and held by the circular form of the building’s green roof, the Sanctuary provides a place for quiet contemporary as well as ceremonial events for the community. Throughout the museum, views of the Scioto River and of the surrounding Memorial Grove, designed by landscape architect OLIN, encourage moments of pause and reflection. 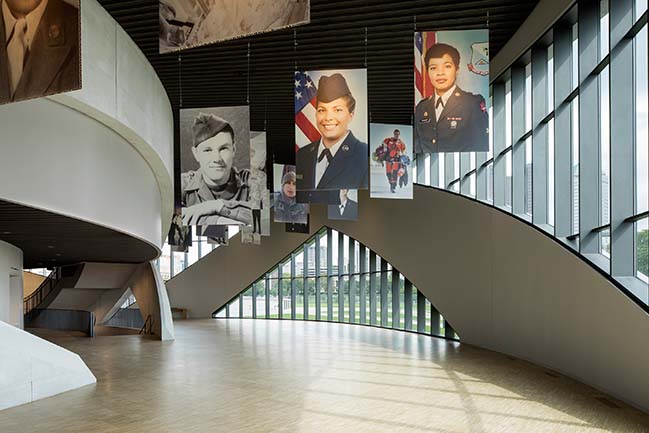 “The National Veterans Memorial and Museum will be a premier destination, featuring an iconic design with meaningful exhibition programs,” said Guy V. Worley, president and CEO of the Columbus Downtown Development Corporation (CDDC), the organization responsible for managing the NVMM project. “With almost 21 million Veterans alive today, the NVMM will serve as a civic landmark to honor, connect, inspire, and educate visitors and Americans about the service and sacrifice of the country’s Veterans and their families.” 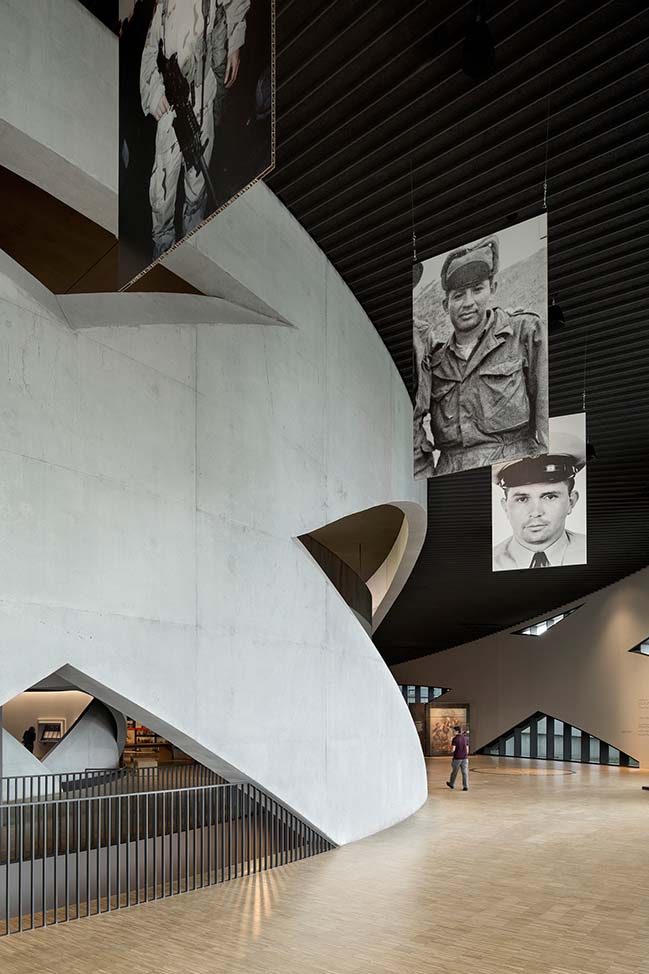 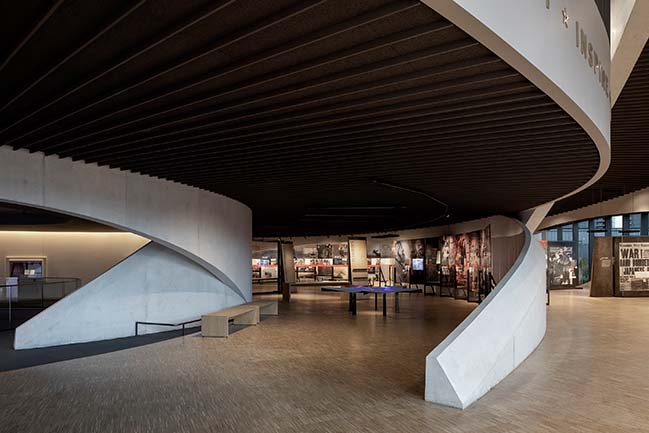 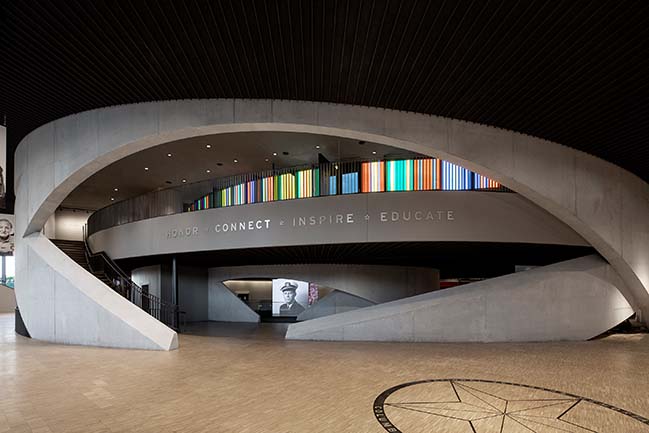 > YOU MAY ALSO LIKE: National Memorial on Mount Herzl by Kimmel Eshkolot Architects 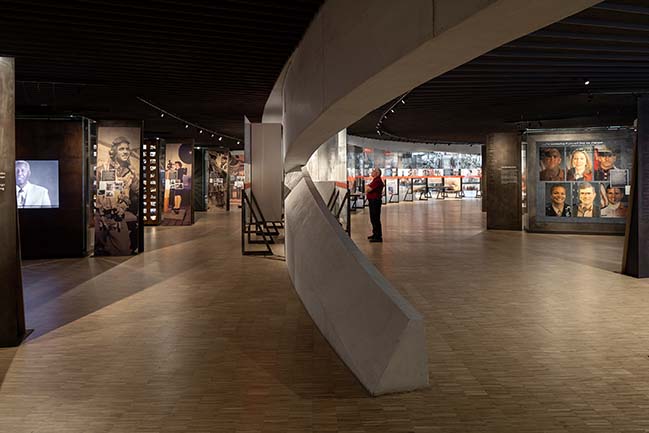 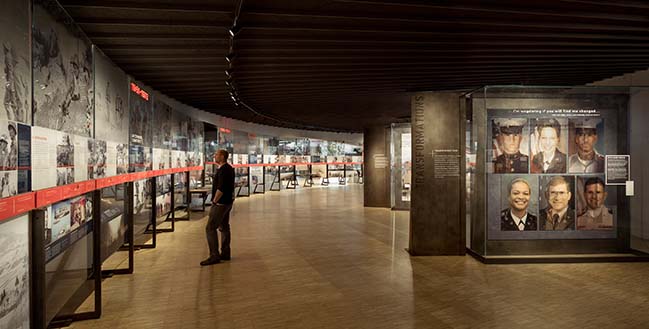 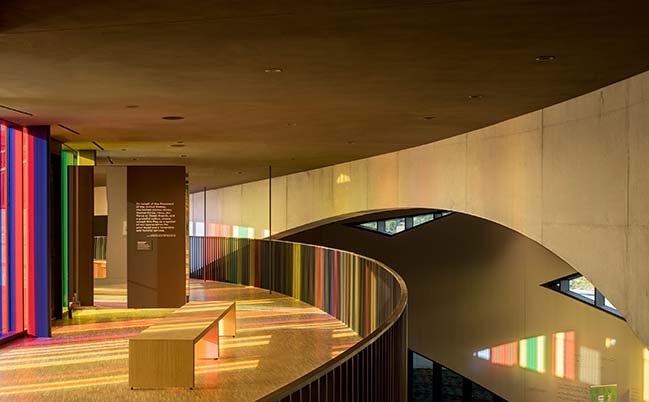