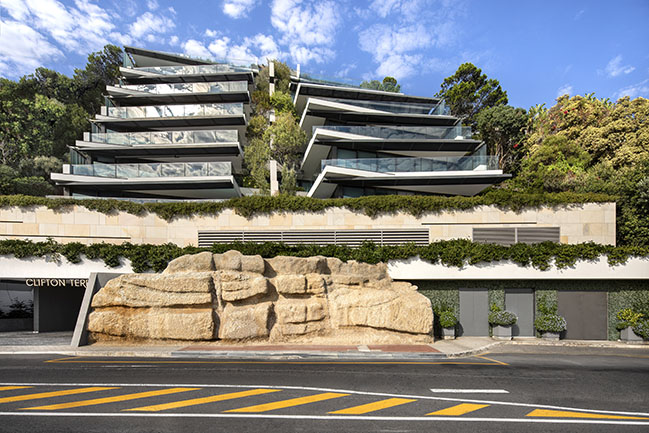 From the architect: The development recedes from the street in a series of stepped, articulated terraces that follow the site's natural contours, boasting panoramic views of the Atlantic Ocean and local landmarks such as Table Mountain and Clifton’s series of sheltered beaches. 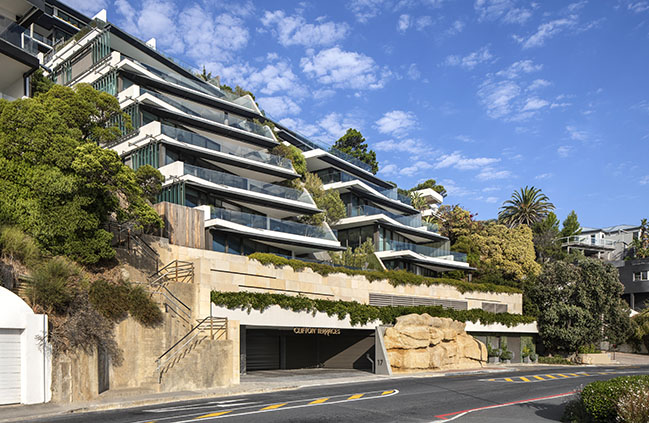 Clifton Terraces accommodates ten apartments, including four levels of side-by-side simplexes, plus a level of duplexes above them and a pair of five-level penthouses set back behind private gardens. Parking is accommodated on three levels: one basement, one at street level and one above. The reception area includes a large-scale site-specific artwork by top-tier artist Marcus Neustetter, which imparts a unique sense of place and adds a layer of creative engagement with the development’s setting. 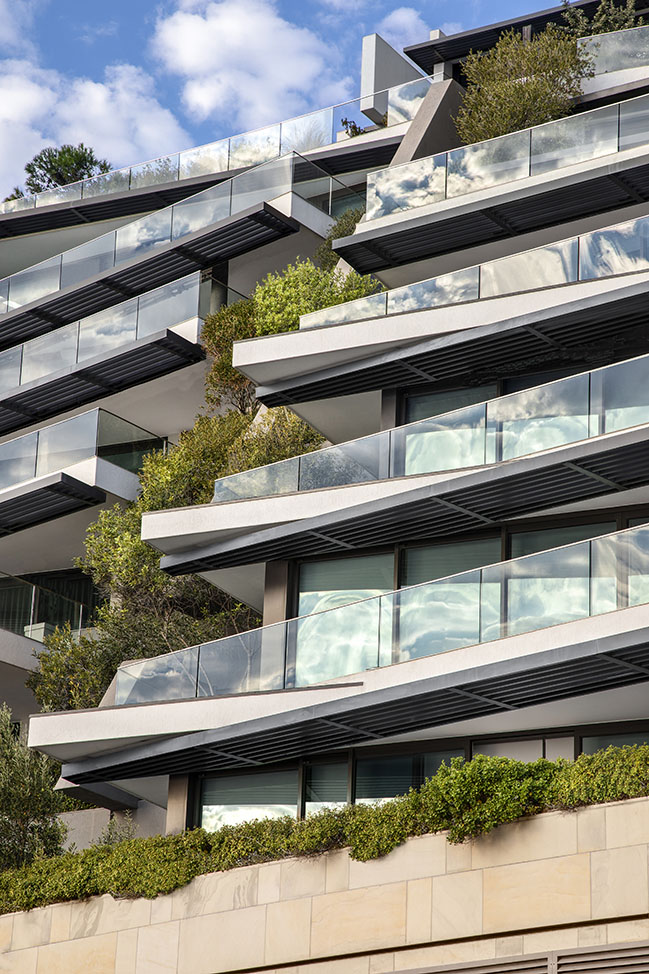 A central spine of greenery divides the tiered levels vertically, allowing each side of the building to pivot independently of the other as the levels step back, making for a dynamic architectural expression of the building’s form. 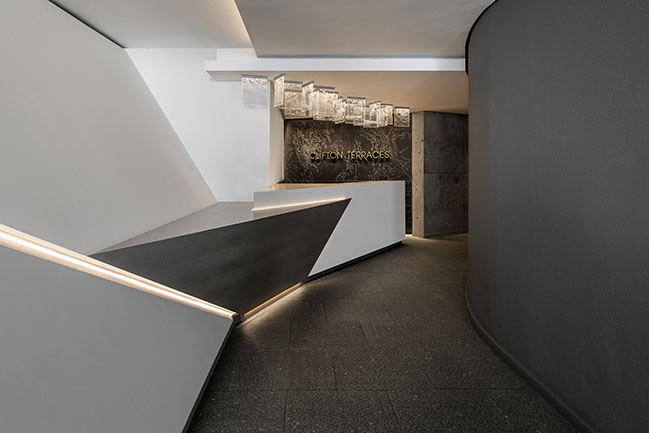 The site, which occupies a prime elevated position on Lion’s Head, consolidated three adjacent properties, two facing the street and one landlocked site behind it. Its position was considered sensitive in terms of the grain of its natural and architectural context, the scenic drive along Victoria Road, and, perhaps most of all, consideration for the views and privacy of neighbouring properties. Behind the site is a protected green belt of public space just below the scenic drive along Kloof Road, with views it was imperative to preserve. 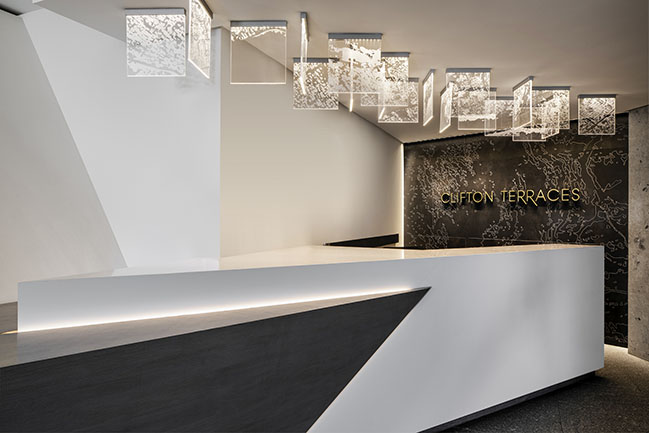 SAOTA actively engaged with the city and the building’s neighbours, analysing the impact of the development on the outlook of each of their properties and ensuring that their lateral views across the front of the building would be unaffected. In most instances, SAOTA managed to improve them. 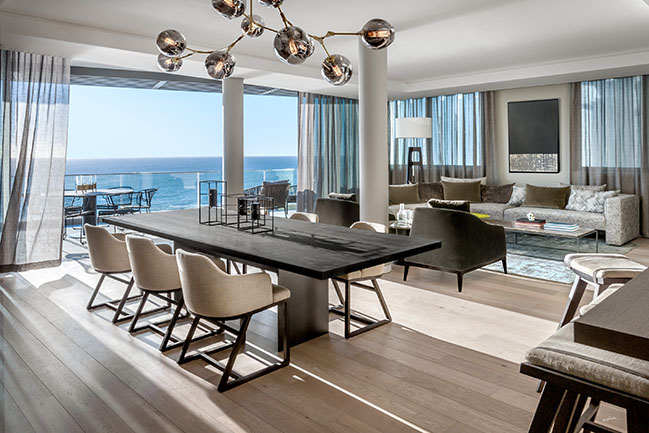 The building’s raked-back terraces and articulated form has its genesis in these considerations, ultimately transforming multiple constraints into the basis of an authentic, highly motivated design solution. 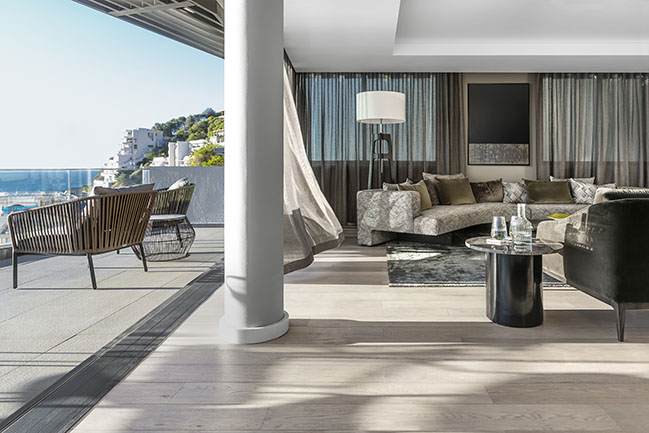 The plinth of the building contributes to the public domain. From a pedestrian perspective at street level, the building’s proportions have been carefully integrated with the existing streetscape, harmonising with the scale of the adjacent buildings. The plinth’s sandstone finish is a nod to the natural colour and texture of the decomposing granite boulder that protrudes from the basement onto the sidewalk, preserving the historical and geological character of the scenic thoroughfare. (The fact that the boulder was decomposing meant significant feats of engineering were required to preserve it.) 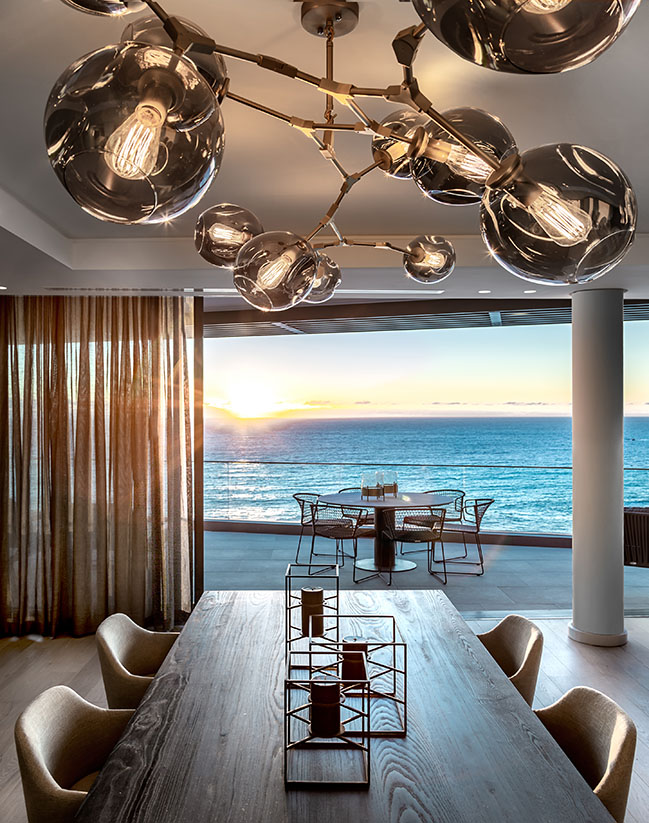 On the residential levels, the retreating layers of the stacked facade are deliberately unimposing even as it creates a distinctive and visually pleasing architectural identity for the development, ultimately making a positive architectural contribution to the public domain. 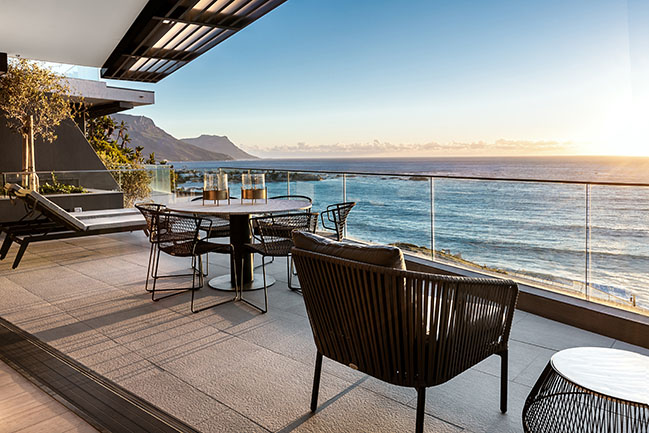 The pivoting faces of the terraces and deep overhangs create protected outdoor living spaces for each apartment with spectacular views. At the same time, frosted glass lateral fin walls have been angled to maximise ocean views and maintain the privacy of residents and neighbours. 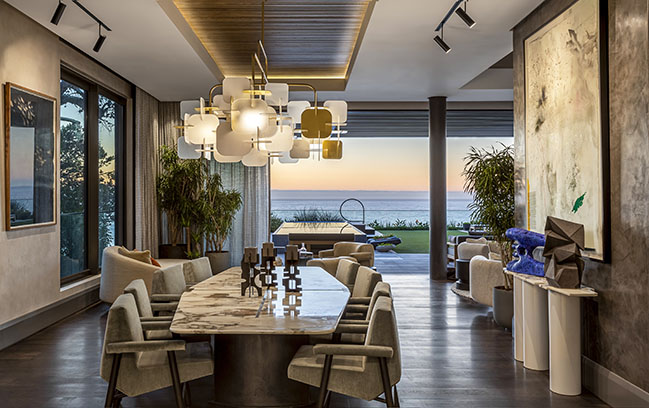 The refined detailing of the façade, contrasting crisp white horizontal lines with dark, blade-like pergolas (which in turn complement the dark bands of fenestration), fragments the building’s mass while providing moments of interest within a holistic aesthetic. 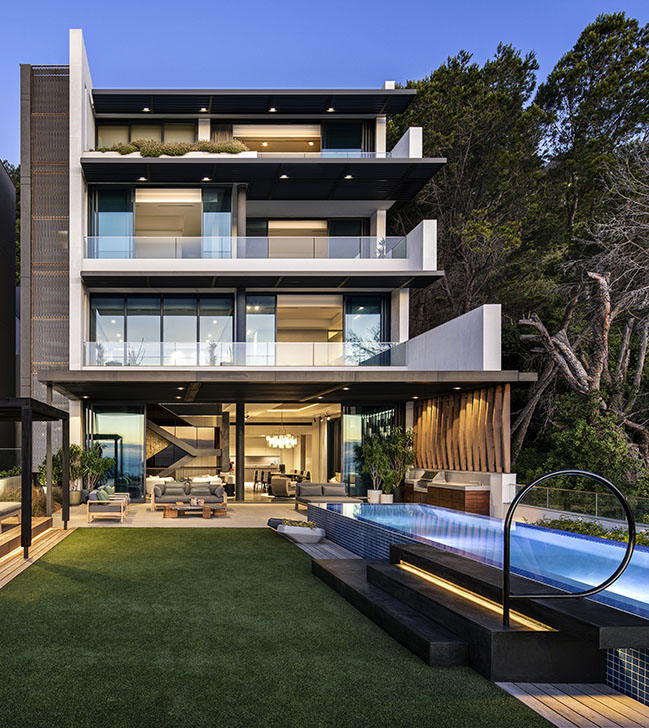 The restrained natural palette of materials blends in with the beautiful natural surroundings while planted terraces on each level soften the building’s edges and blend in with the natural environment, as does the treed ‘spine’ running the vertical length of the development. The development retained 25 existing trees on the site and added 101 large trees (plus over 3 000 small plants and shrubs). 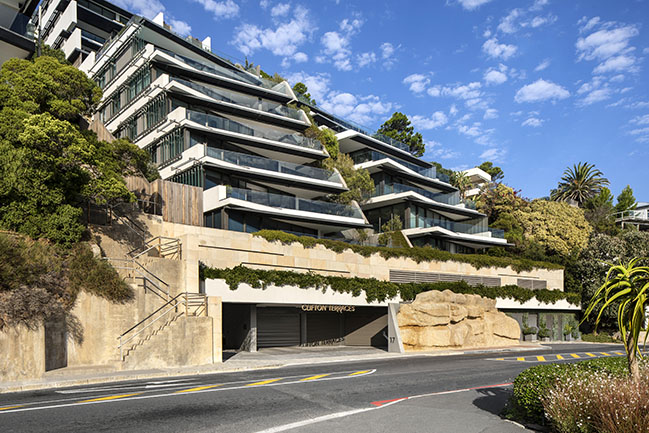 Generous landscaped bands of indigenous greenery on either side of the property soften its relation to the public thoroughfares on either side, such as the Biskop Steps, a popular training route for joggers and walkers. 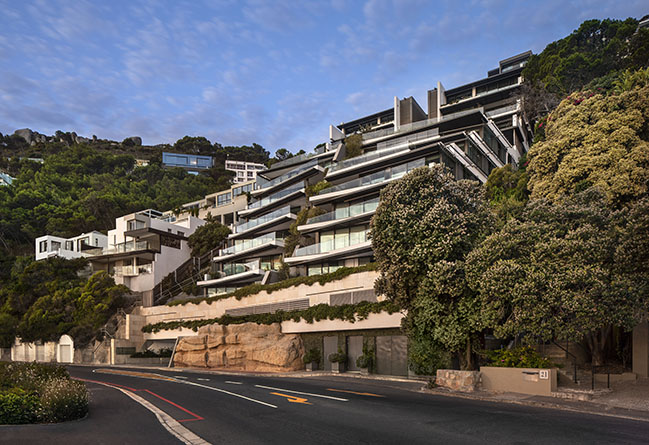 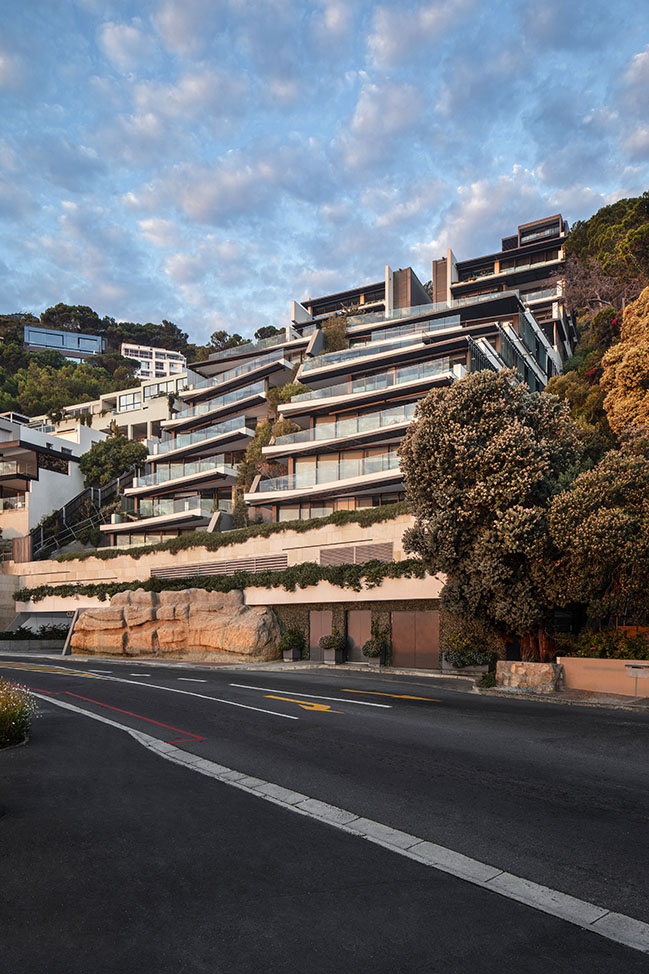