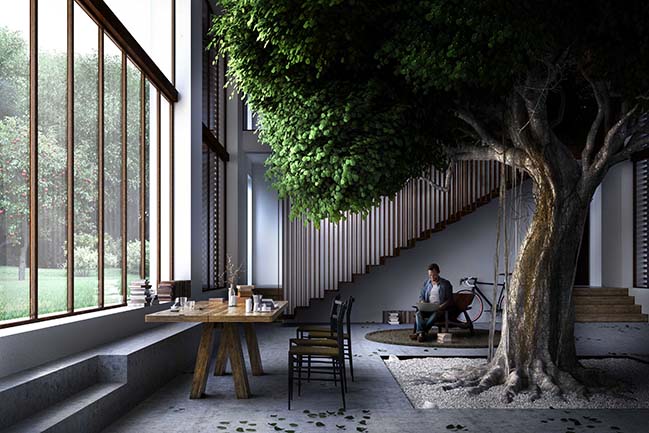 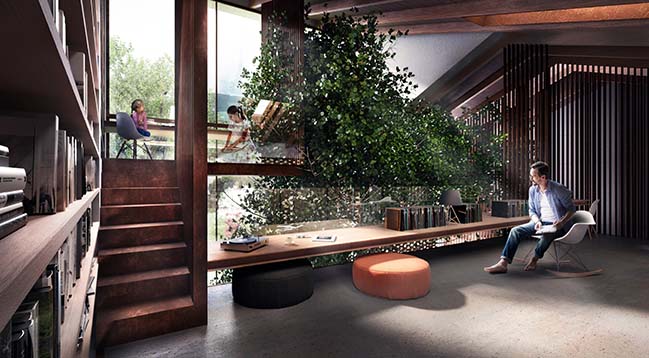 From the architect: Living quarters encircle the tree’s leafy branches up to the top. The Greenary will be built in the countryside close to Parma, Northern Italy as a private residence. It is the first step of the master plan for Mutti, the leading tomato company, which CRA won in 2017 after an international competition. The house and the factory are being developed in close continuity due to their physical proximity and their joint call for a closer integration between nature and the built environment.

The Greenary is not a tree-house or a house on a tree, but a house designed around a tree. Life unfolds in sync with a 50-year old Ficus, a perennial tropical plant housed in the middle of the farmhouse’s south hall. All around the tree, a sequence of interconnected rooms creates six domestic spaces – three above the entrance, three below it – each of them dedicated to a specific activity: practicing yoga, listening to music, reading, eating together, sharing a drink, and keeping a wine cellar and storing dry cured ham for aging. Each space is at a different level of the tree, a 3-dimensional sequence that follows Adolf Loos’ principle of Raumplan. 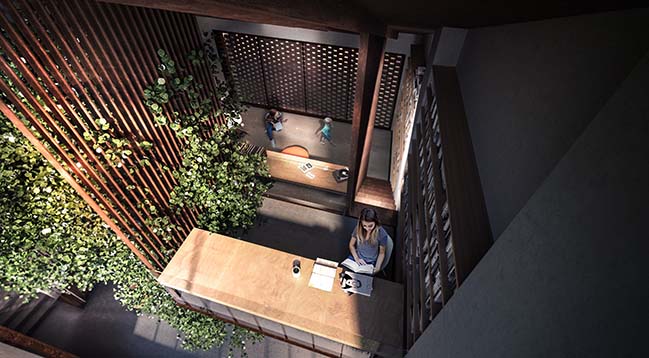 The project starts from the spiritual symbolism of the Ficus tree, whose various species are revered in many parts of the world: the Ficus religiosa is venerated by Buddhists as the Bodhi tree, under which Siddhartha achieved enlightenment, while the Ficus microcarpa adorns the ancient parks of Guangzhou in China. The plant is well-suited for indoor living conditions, as it enjoys stable temperatures all year long. To create the ideal setting for the tree to thrive, CRA has completely redesigned the old farmhouse to maximize natural light through a 10-meter-high (33-feet-high) south-facing glass wall.

“We wanted the design to reflect our innate ‘biophilia,’ the natural impulse to connect with other forms of life, as put forward by the great Harvard biologist Edward O. Wilson,” says Carlo Ratti, founding partner at CRA practice and director of the MIT Senseable City Lab at the Massachusetts Institute of Technology (MIT): “With the Greenary, we are trying to imagine a new domestic landscape built around the rhythm of nature.” 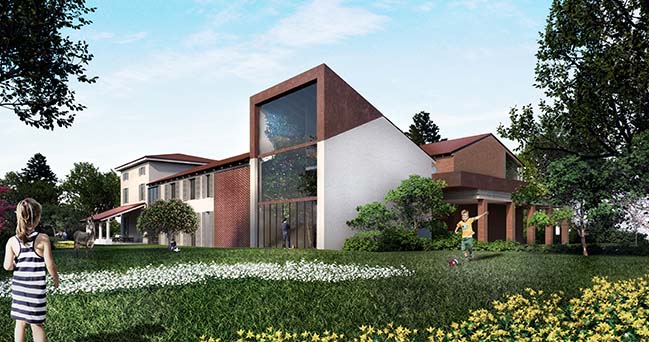 The Greenary puts forward the idea of living inside-out – based on the principle of biophilia. Its dining room sits at the bottom of the 10-meter-high (33-feet-high) glass wall: it is built slightly below ground level, so that the top of the table has the same level of the grass outside. Diners can look out onto the vast orchard where donkeys and other animals stroll.

“Inhabiting each of the rooms will be a bit like inhabiting a tree,” says Andrea Cassi, Project Manager at CRA, talking about the south hall: “As the project breaks down traditional separations between rooms and floors, the Ficus becomes the organizing principle of a contemporary interpretation of the Raumplan for the age of BIM. Every level provides a different perspective on nature.”

The Greenary complex has a total internal space of 800 square meters (8611 square feet). Its call for a closer integration between nature and the built environment is also fundamental to CRA’s master plan for the neighboring Mutti factory. The renovation of the Greenary will start in fall 2018 and be completed in late 2019. 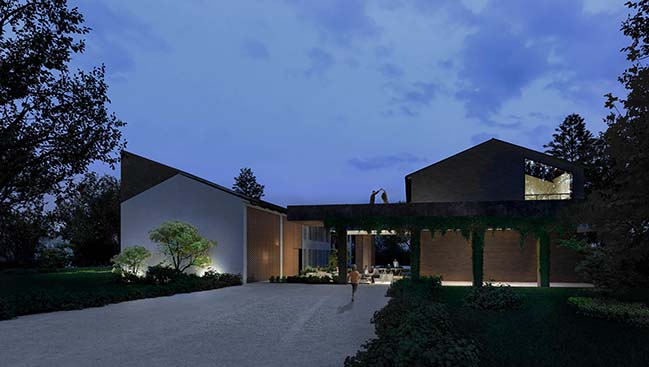 10 / 05 / 2018 CRA unveils the GREENARY, a renovated farmhouse designed around a 10-meter-high tree growing within the main living area...