This project started with a couple who wanted to rebuild their old residence, which they had lived over 70 years... 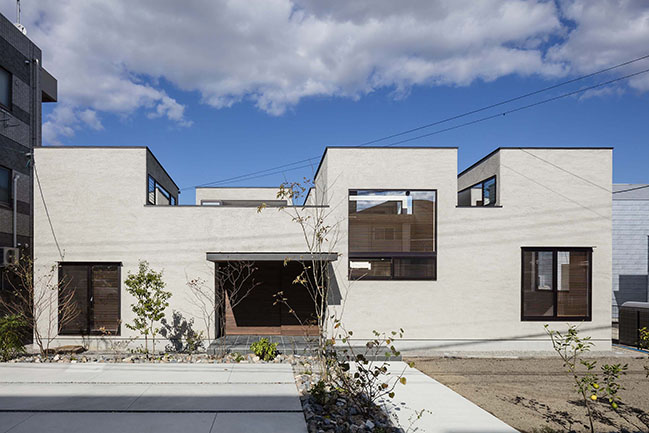 From the architect: The couple requested us to build a single-story house with a bright dining kitchen, 3 parking spaces, and a vegetable garden. 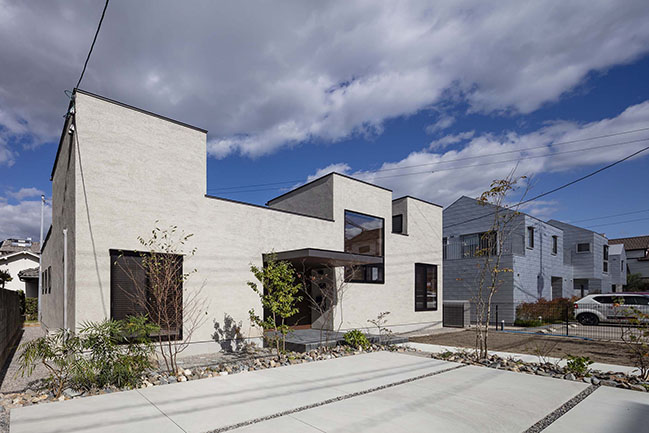 The site, located in the northern part of Hiroshima City, is surrounded by two-story houses with several medium- to high-rise apartment buildings. We assumed that the requested volume of a single-story house would be difficult to adapt with its surroundings in the context, so we attempted to set up a volume on the same scale as the surrounding building and then cut the unnecessary parts out of the volume. 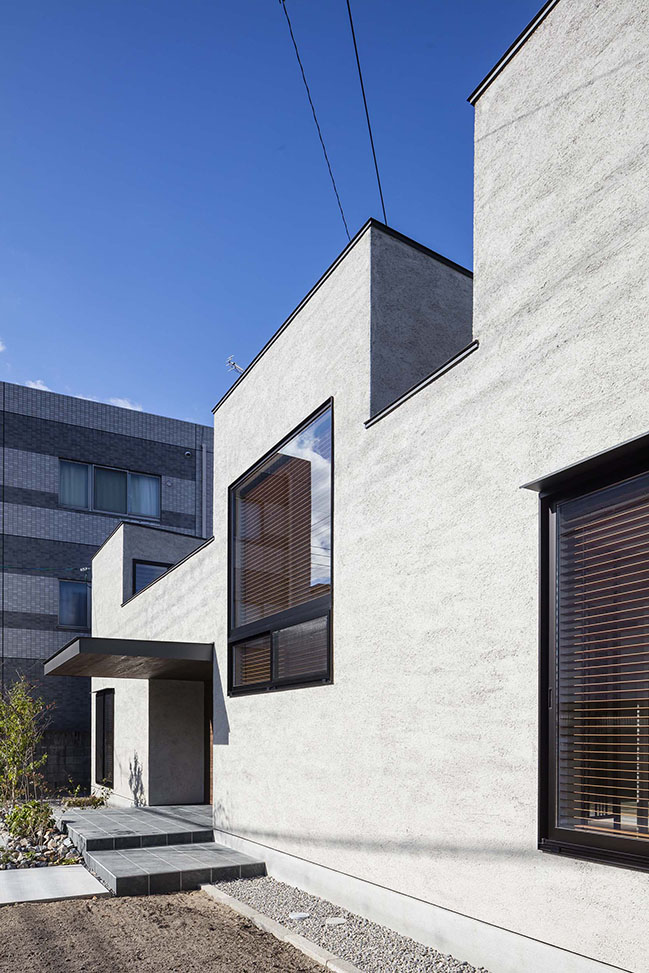 The house was planned to be located on the north side of the site while the parking space and the approach to the entrance were on the south side adjacent to the vegetable garden. We created concavities by cutting volumes such as storage and corridors that do not require air volume out of the volume. The concave cut-outs create a bright and airy space by acting as an environmental device to let in light and wind as well as partitions gently dividing the air space. 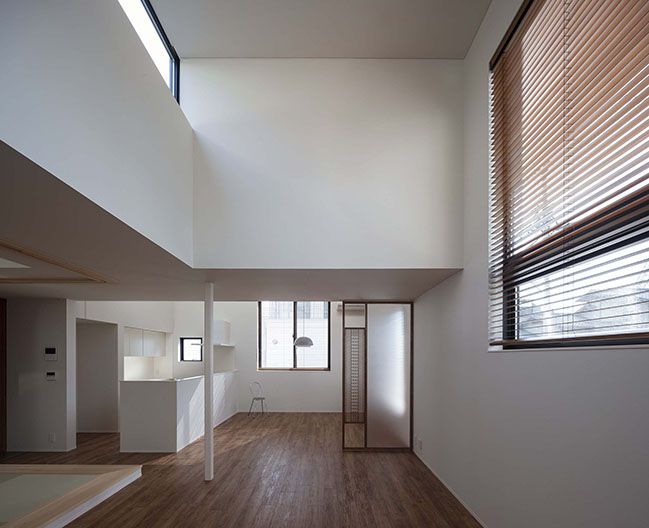 In the floor plan with a two-story volume in the vertical direction, the living room, dining room, kitchen and master bedroom were functionally arranged on the south side of the house, as our clients spend most of their time. The living room has a large window to create a bright, daylight-filled space. The residents can enjoy looking up at the sky and the ever-changing sunlight from every room as the Japanese-style room and the study on the north side of the house are designed to allow light from the south to be cast on by clerestory windows created by concavities in the wall. 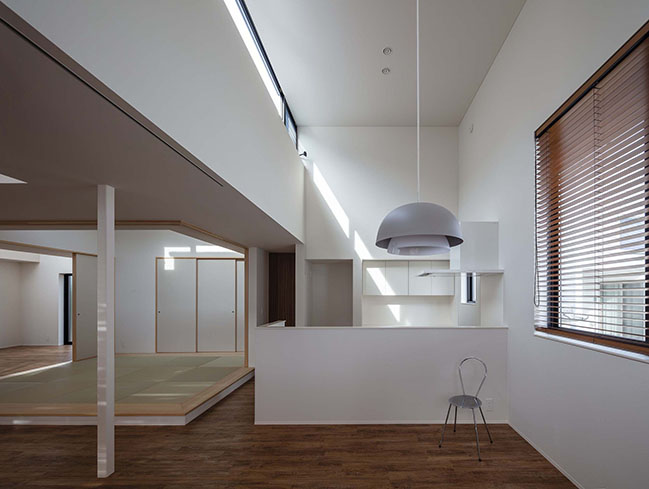 A part of the clerestory windows is fitted with one or two jalousies, which can be opened and closed to release the heat in the upper part of the room. In the spring and autumn, the jalousies can be opened to let the natural air flow through the room. 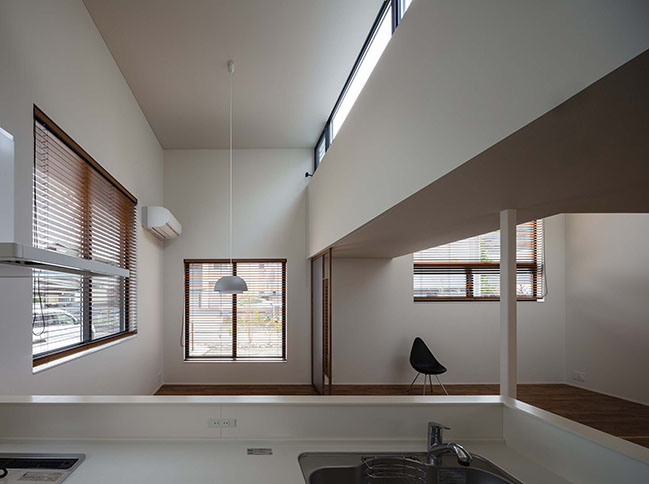 The concavities, part of which is a loft, are associated with each space in the house, and also are slightly displaced and recessed to make a change in the capacious space. These recessed spaces are formed in careful connection with the characteristics of each space and room.

As requested by our client, a vegetable garden has been placed outside so that it can be seen from the dining room and kitchen where they spend most of their time. 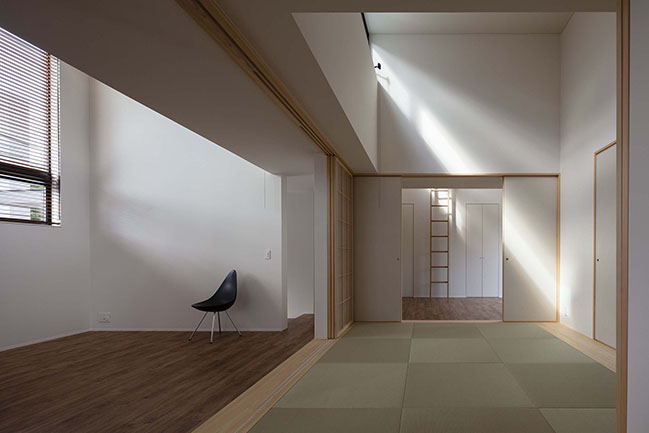 Our plan was designed to give priority to livability and comfortability without significantly changing their rhythm of life, daily routines and lifestyles, but it would be possible to create a richer life by composing the concave spaces in the house.

We aimed to create an architectural design of the house whose space is rich by carefully combining the client’s request with our idea of what architecture should be in a city. 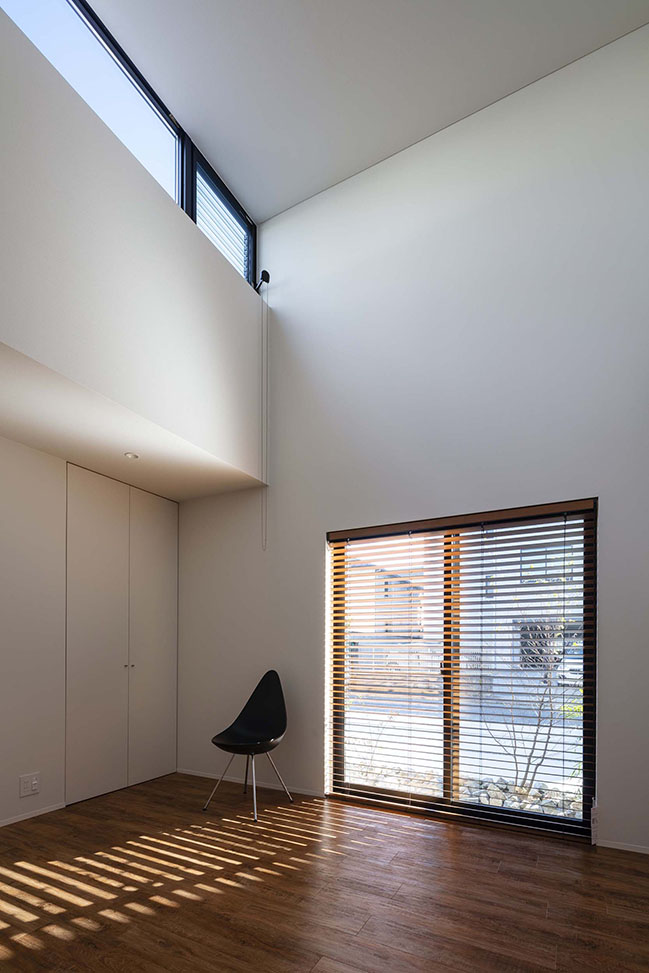 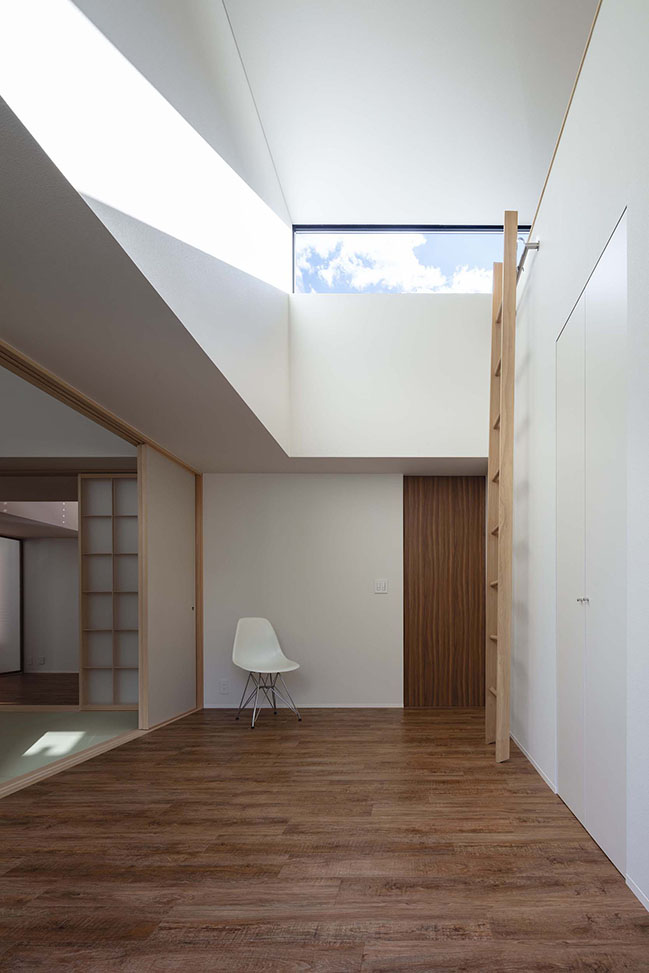 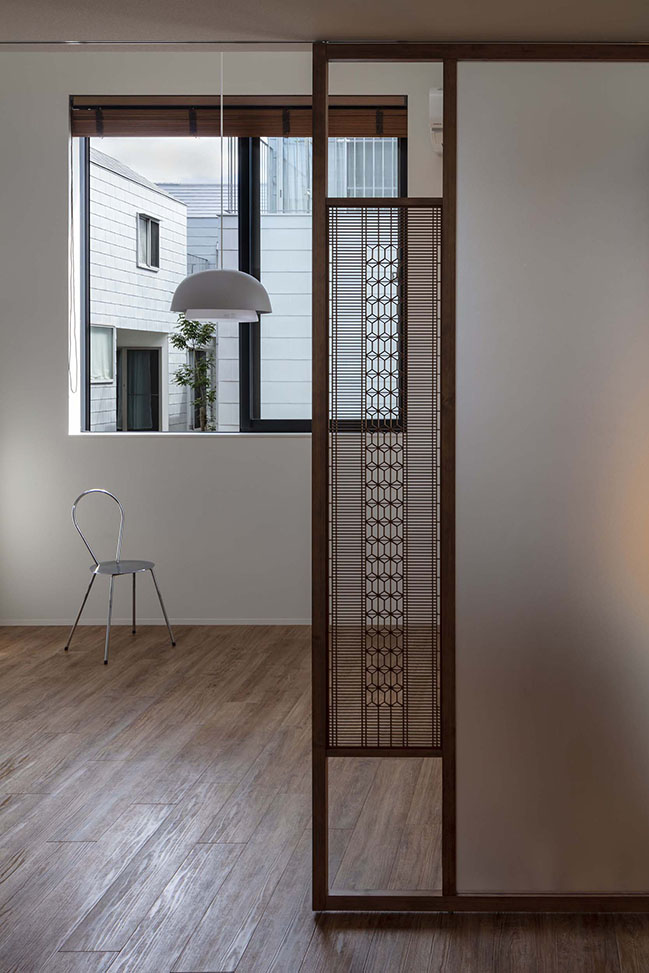 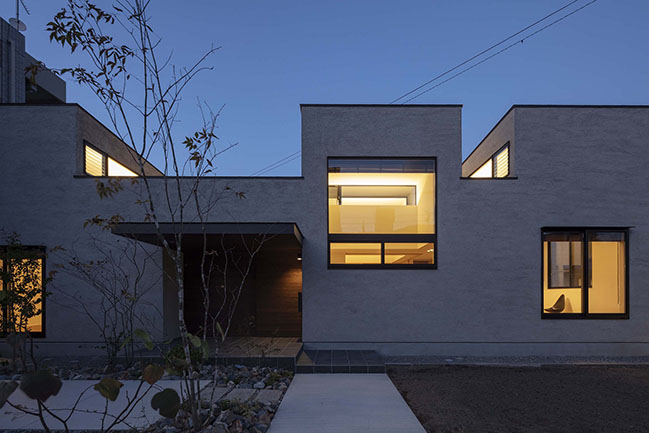 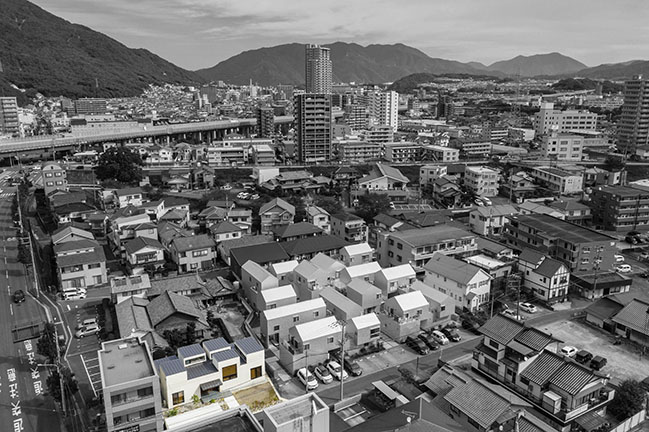 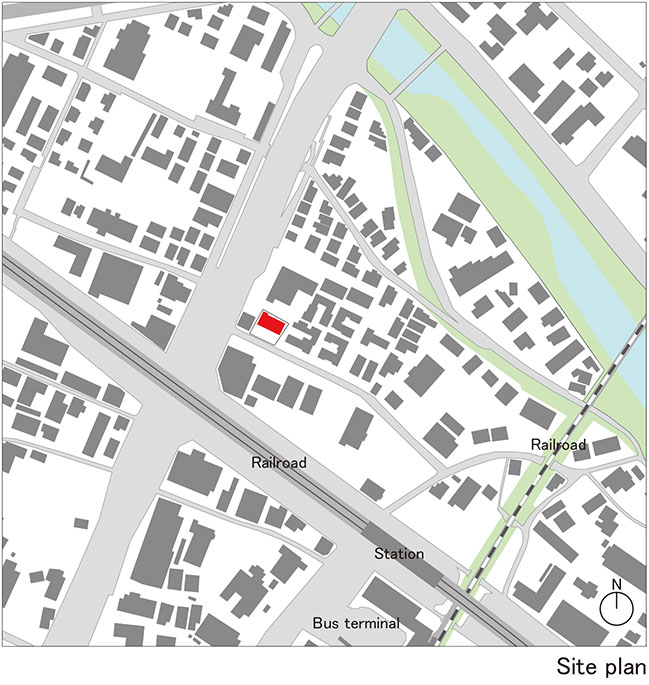 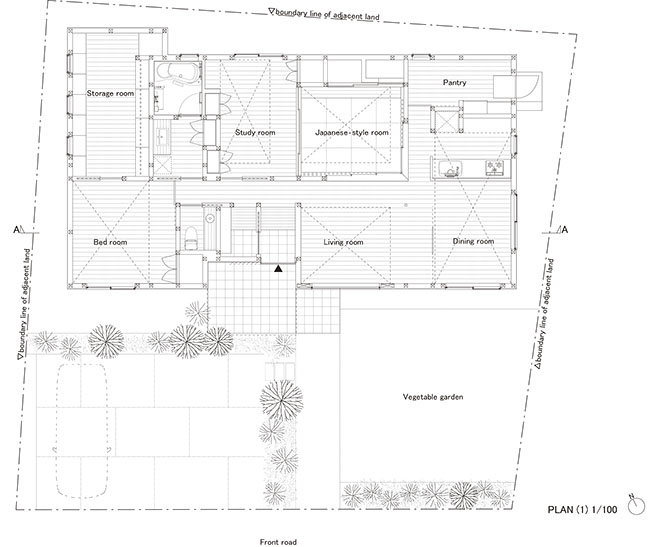 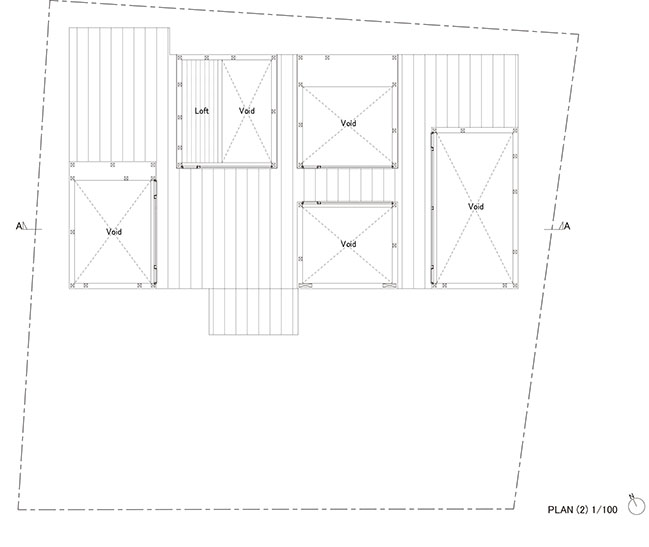