Based on the genes of Changsha city and W Hotel, CCD creates a cosmic journey in W Changsha... 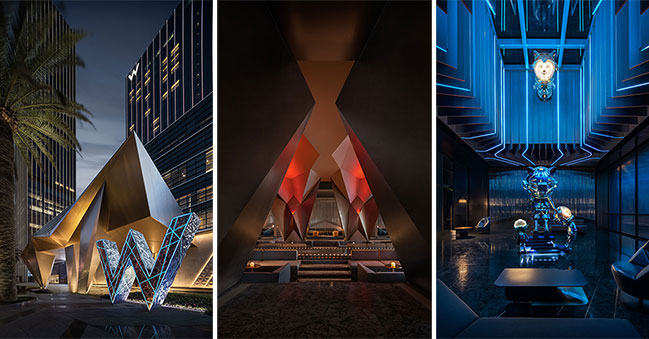 The majestic Yuelu Mountain and the rolling Xiang River have witnessed the glory of the city.  Over more than 3,000 years, Changsha has been keeping pace with the course of Chinese history. Today, this renowned historical city is emerging as a fashionable city with nationwide popularity.

Based on the genes of Changsha city and W Hotel, CCD creates a cosmic journey in W Changsha. 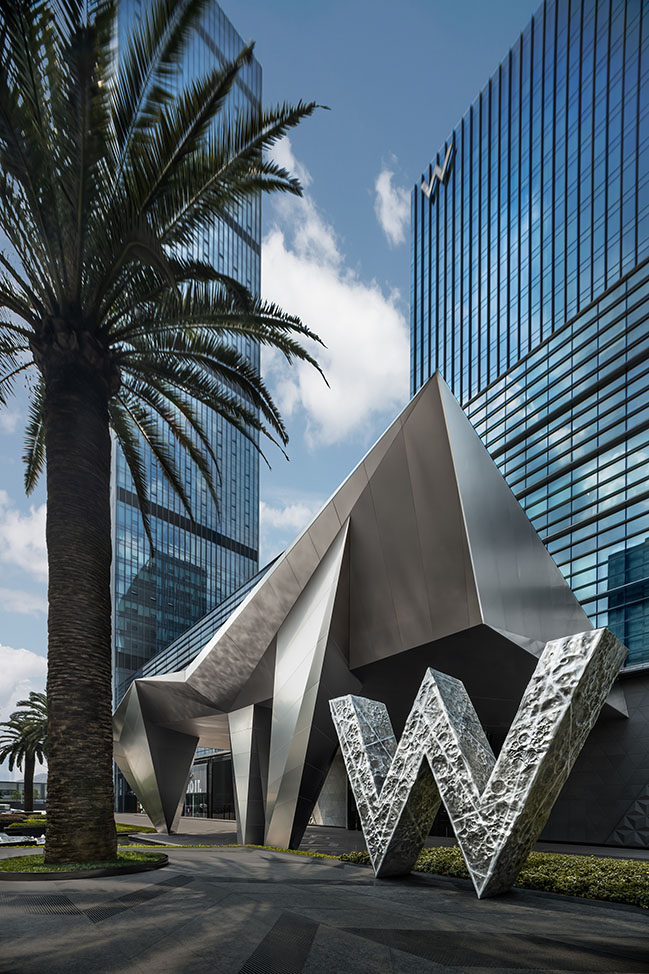 Light up the Starry Sky
Changsha, known as star city, is full of surprise and mystery like the universe. CCD combines the concept of futuristic travel with the local cultural context to create a fantastic "Starry Universe", which ignites the passion of exploring the unknown with curiosity and courage. 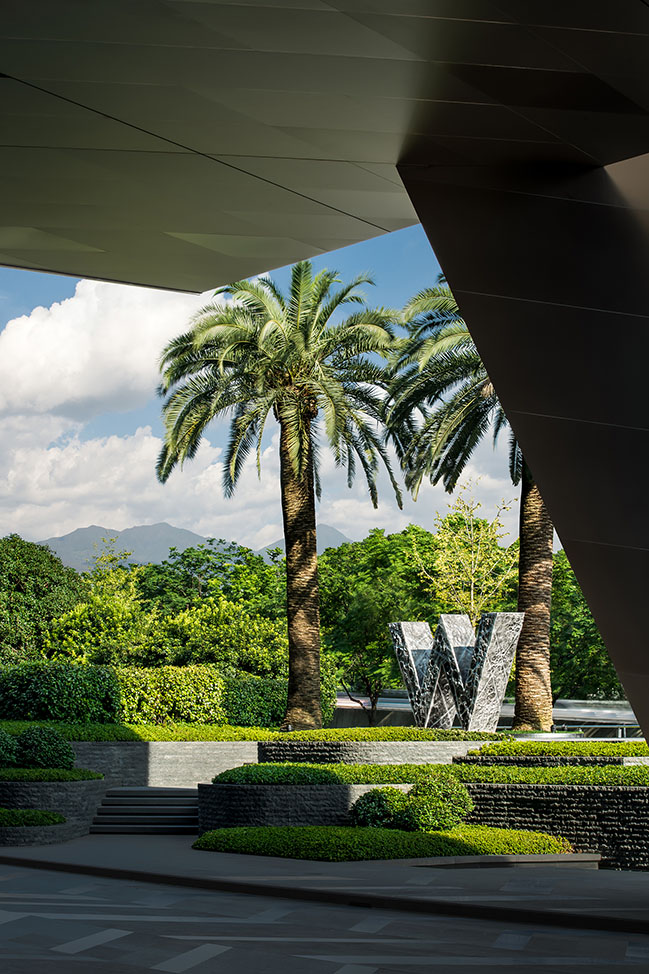 The iconic "W" logo at the hotel entrance features rough textures and splendid lines, which respectively echo the uneven surface of the moon and the trajectory of aircraft orbiting around the moon in an outer space journey. The soft lighting and surreal expressions create an exciting visual experience. 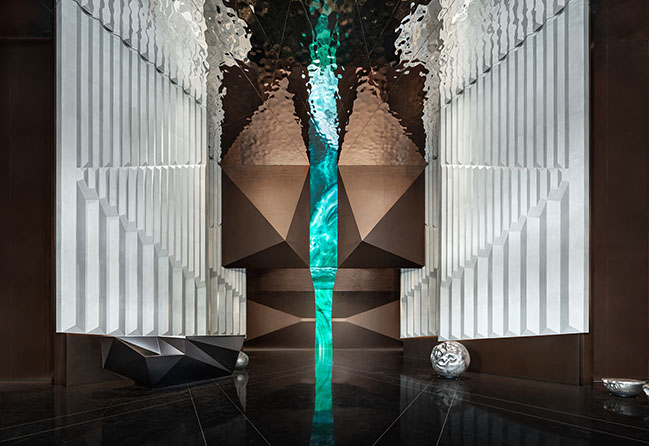 "Star" is deconstructed into points, lines and planes in a three-dimensional manner, to shape the avant-garde entrance gateway with sharp edges and angles. The metal textures of the gateway exude cool luster and bring about a feeling of awe. 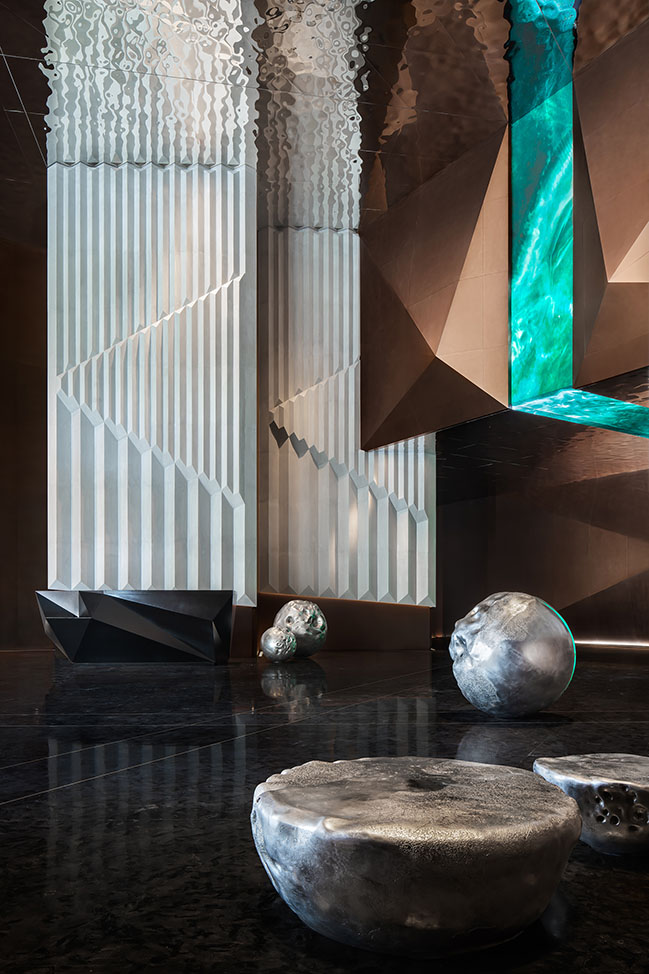 Starry Universe
The design concept of the foyer is to magnify the universe by 300 times and to decompose it into planets, meteorites, dust, protons, neutrons and atoms… 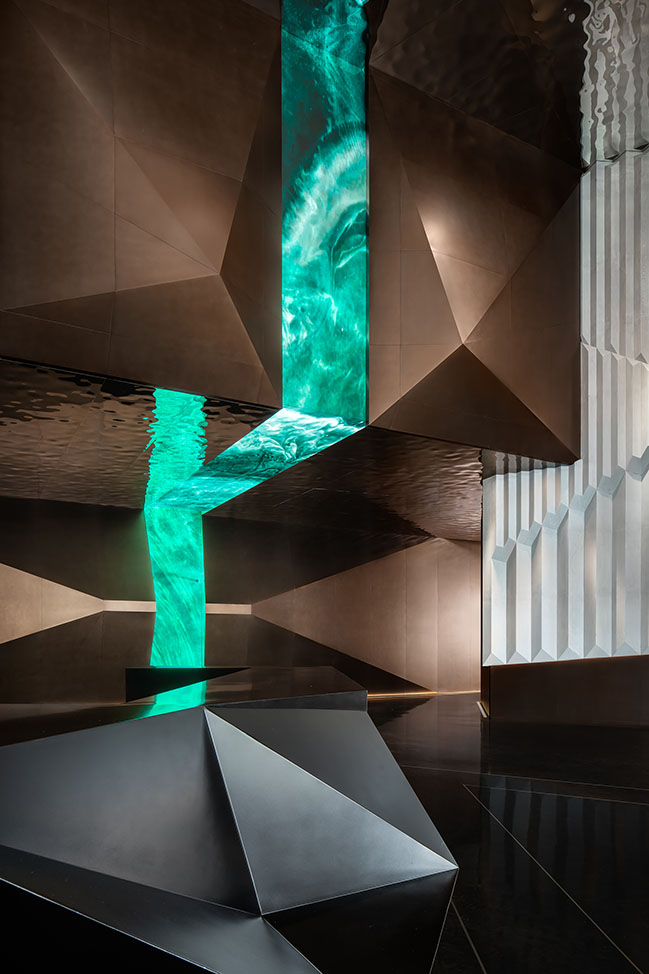 Stars
The industrial-style wall featuring cement textures and faults are combined with elaborately-designed lighting, together forming an avant-garde scene of floating stars. 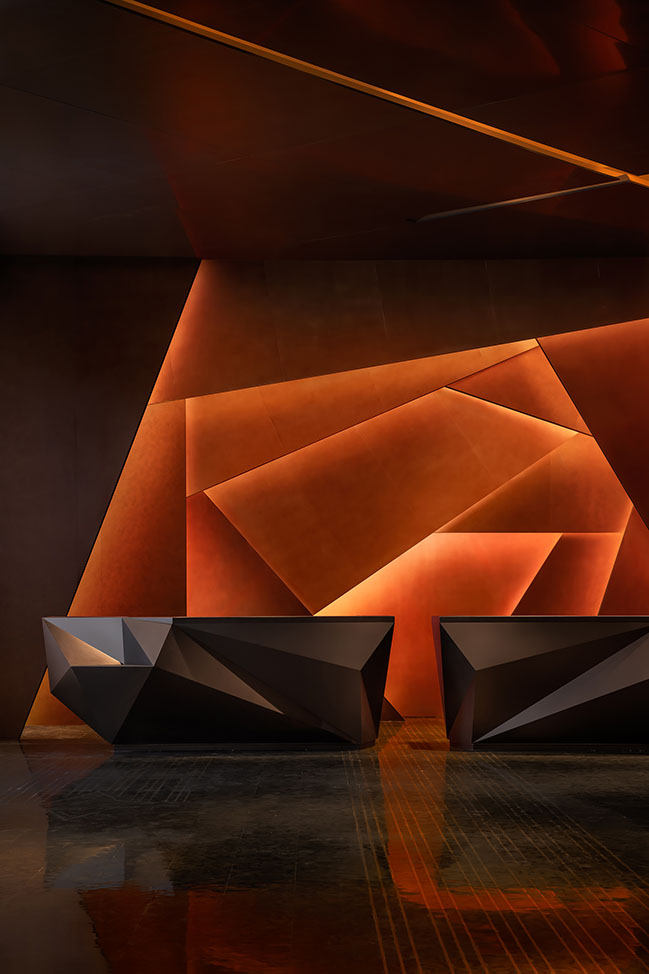 Path of Stars
Rhombic lines are vertically embedded into the stone flooring in a way like the movement of light beams, which brings the guests into the mysterious space where they can look up at the sparkling stars. 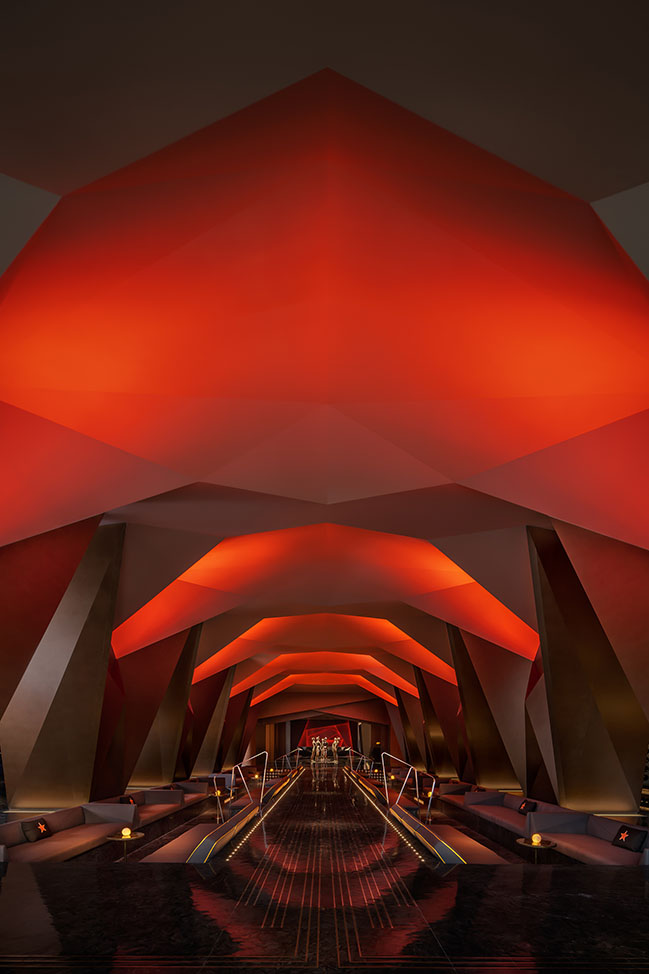 Realm of Stars
Copper sections are folded at large angles and in different directions to extend the spatial structure, thereby enabling guests to perceive the power of numerous individual entities in the vast universe. Such power can nourish the inner mind, and guides guests to get away from the reality to immerse themselves in the multi-dimensional space journey and to dialogue with the universe. 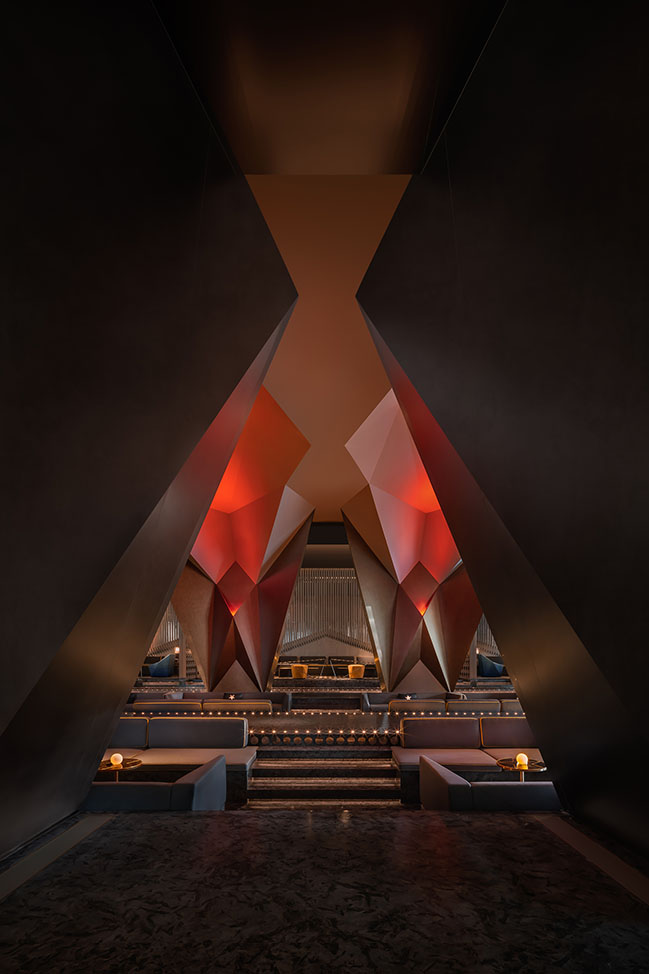 The space and artworks echo with each other as independent entities. They are symbols derived from the universe, like stars, meteorites, orbits of stars, and meteoroids, and represent the expansive sky, the present and the future.

Inspired by meteorites from Zeta planet, the round metal art installations scattered in the lobby exude mist randomly, which symbolizes the enrichment of cosmic energy and welcomes all "adventurers". 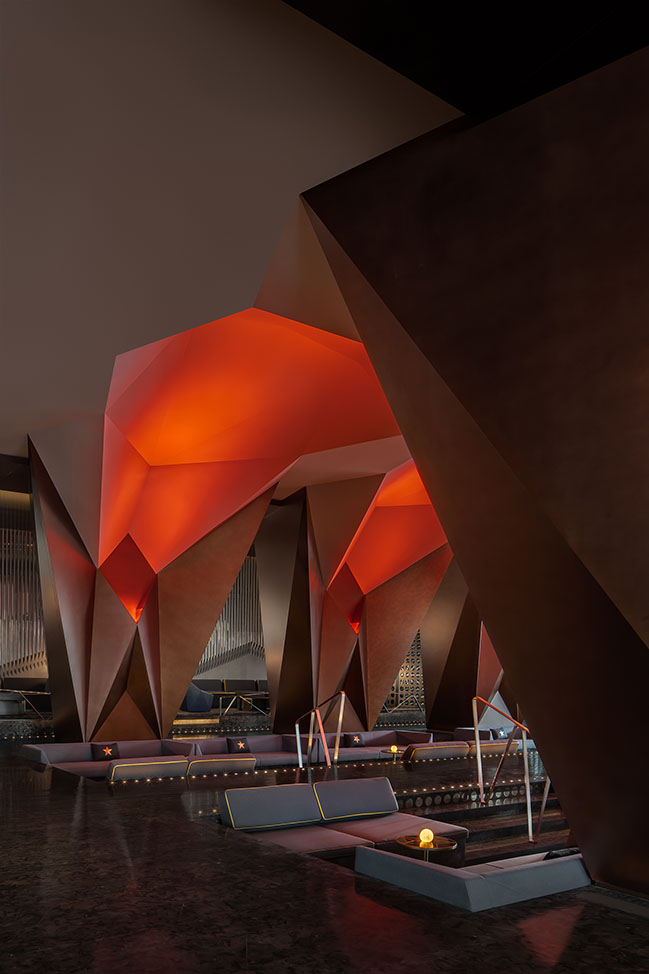 The Avenue of Stars opens up a fresh new journey. Everyone walking on the avenue is a shining star in the future. 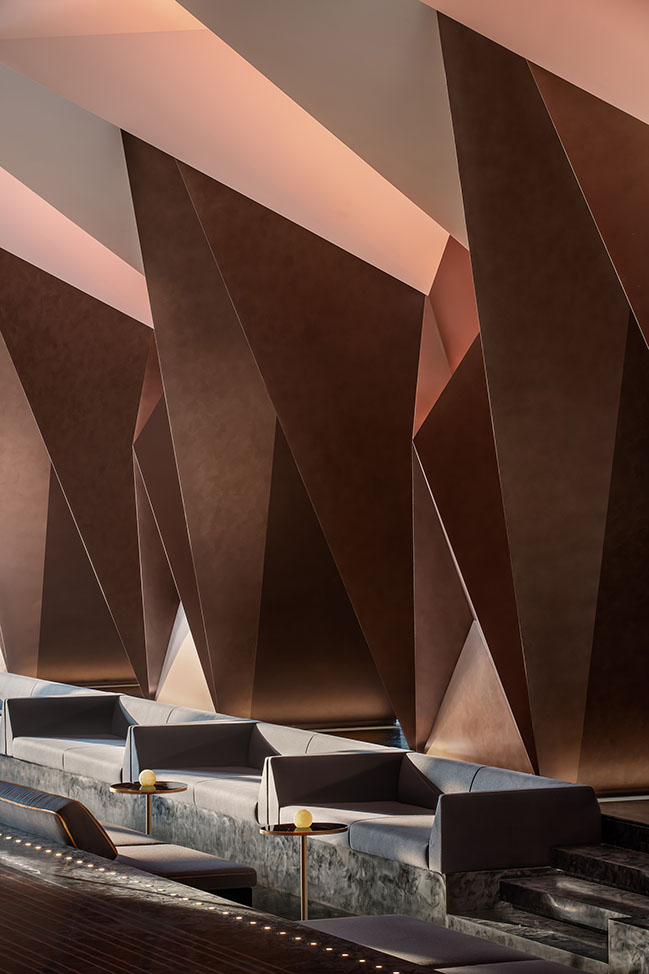 The structures are formed by geometric blocks, which look like fragments after the impact of planets, appearing pure, tough and passionate.

A runway stretches through the middle of the lobby bar, delivering a strong sense of ceremony. It's like a fashion show where everyone can be a shining star. 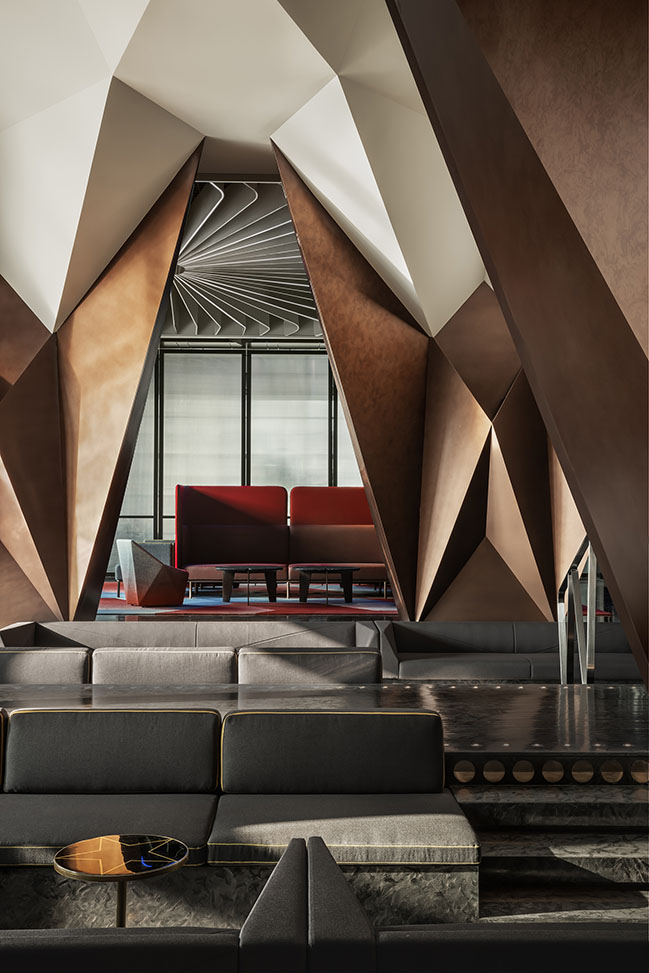 The fusion of reality and fantasy evokes infinite imagination, and makes guests feel like they're entering a black hole to travel through time.

The sunken booths simulate the seats of fashion shows. Guests sitting here are part of the scene, making the space full of surprises. 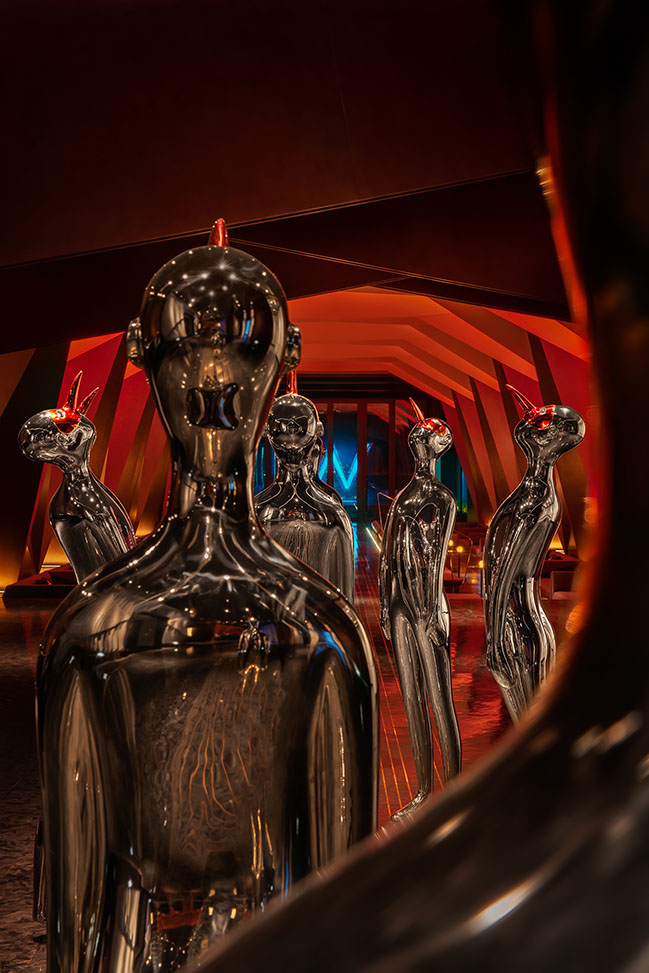 The "Pepper Man" sculptures, symbolizing brave heroes who open a new chapter of history, are looking up and chasing the unreached places beyond the horizon. 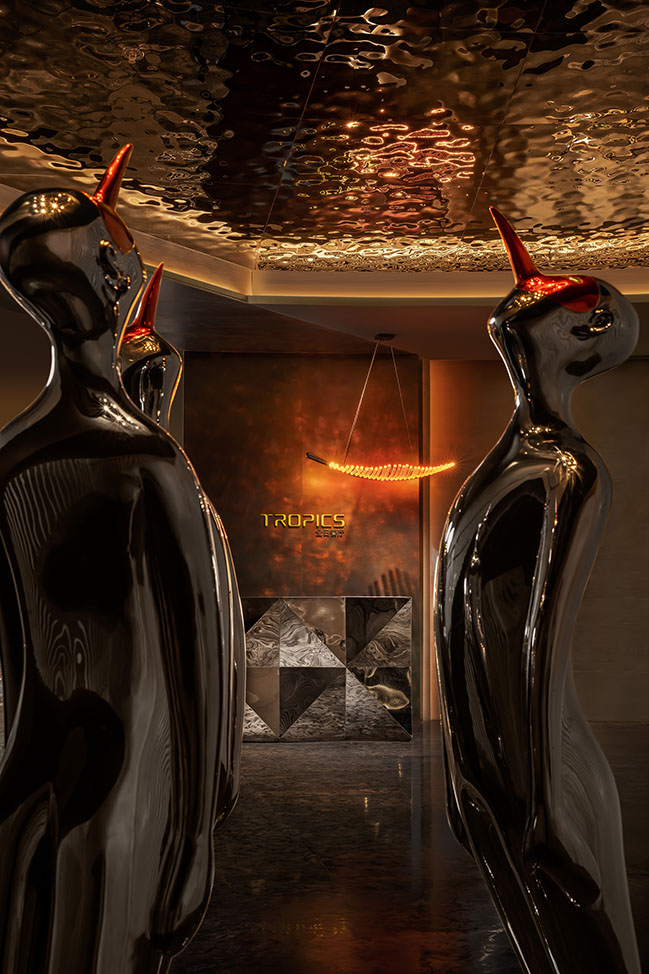 Stars Feast
The star-like ceiling lights and dazzling blue spotlights create intriguing visual effects like Hollywood blockbusters, and inherit the brand's spirit of boldly showcasing its identity. The suspended ceiling, formed by lines with a sense of modernity, is as stunning as the stars. 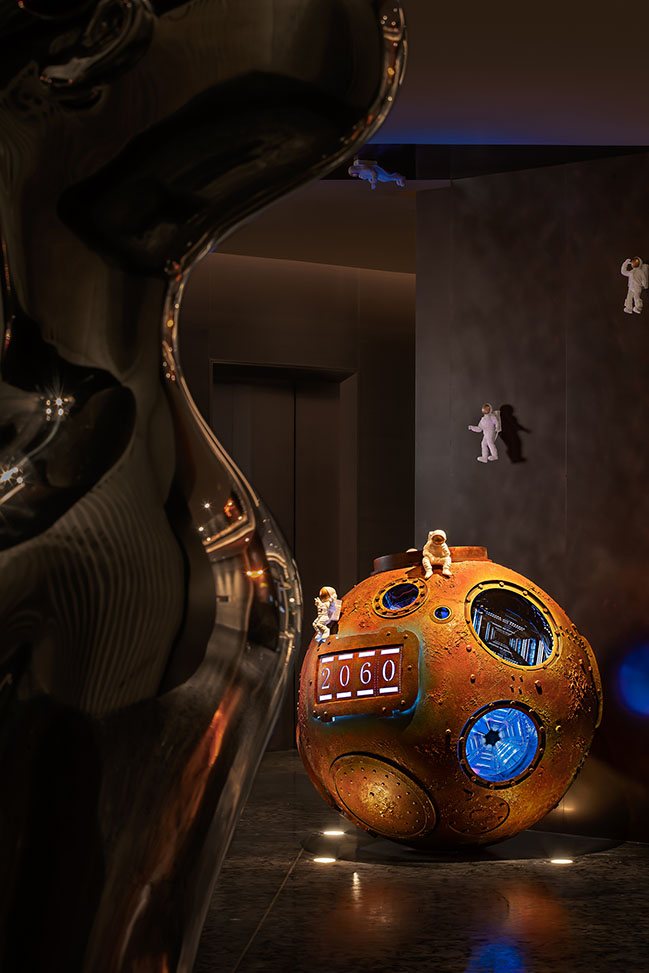 With fantastic, gorgeous and mysterious visual expression, the design injects hopeful and unconstrained imagination into space.

The starry lights converge under the ceiling, hence creating a fun starry sky also a "star club" that combines reality and the future. 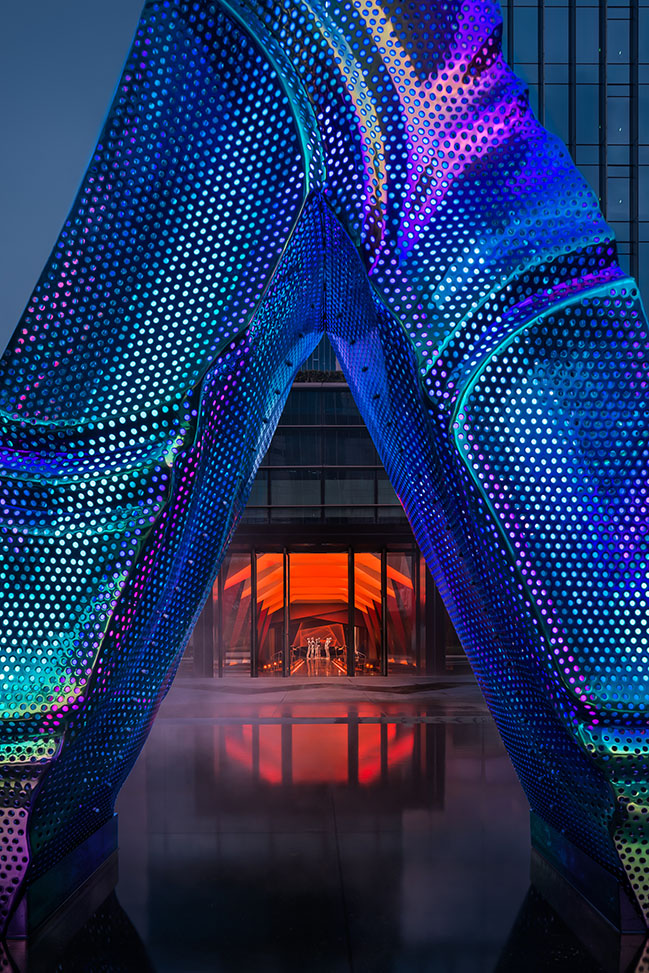 The No.7 Schrodinger's Cat looking up the sky represents the pioneers of the age who explore the unknown.

Changsha, the star of entertainment, rises in all its splendor like world-renowned Liuyang fireworks, attracting numerous people. The theme of Stars Feast offers guests a fascinating spiritual feast. 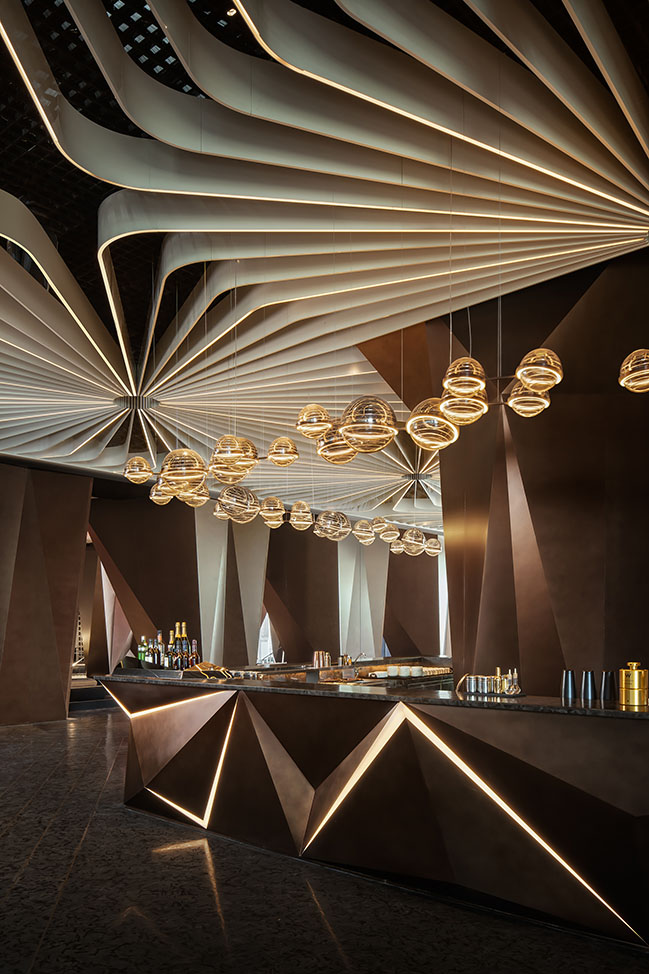 Inspired by the communication with nature, architecture and people in terms of planets, universe, energy, order, future, ideal and home, the design team constructed an ideal future wonderland that connects the universe, world, space, and humanities. 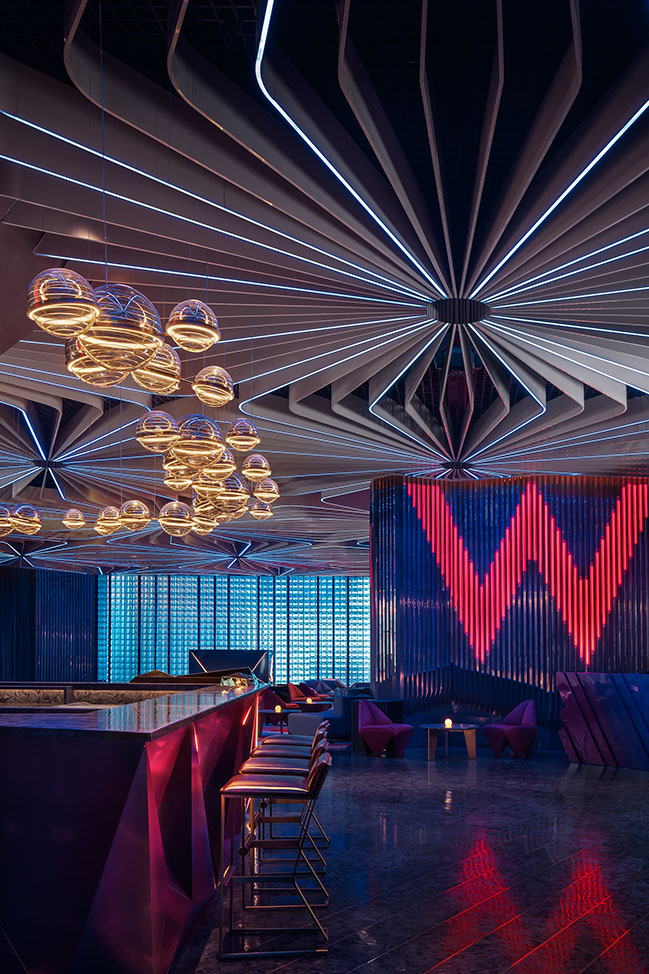 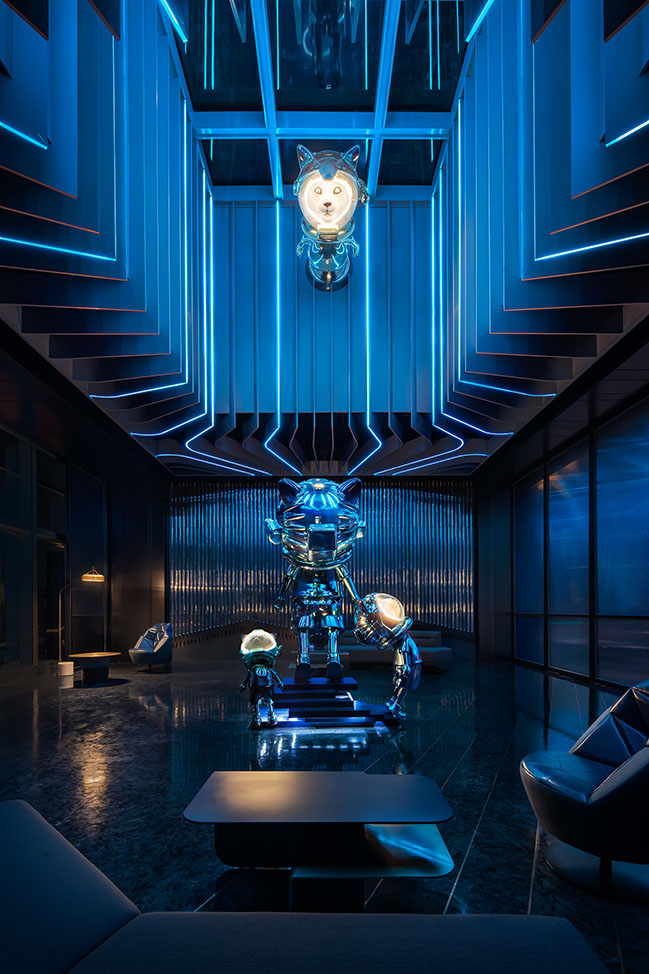 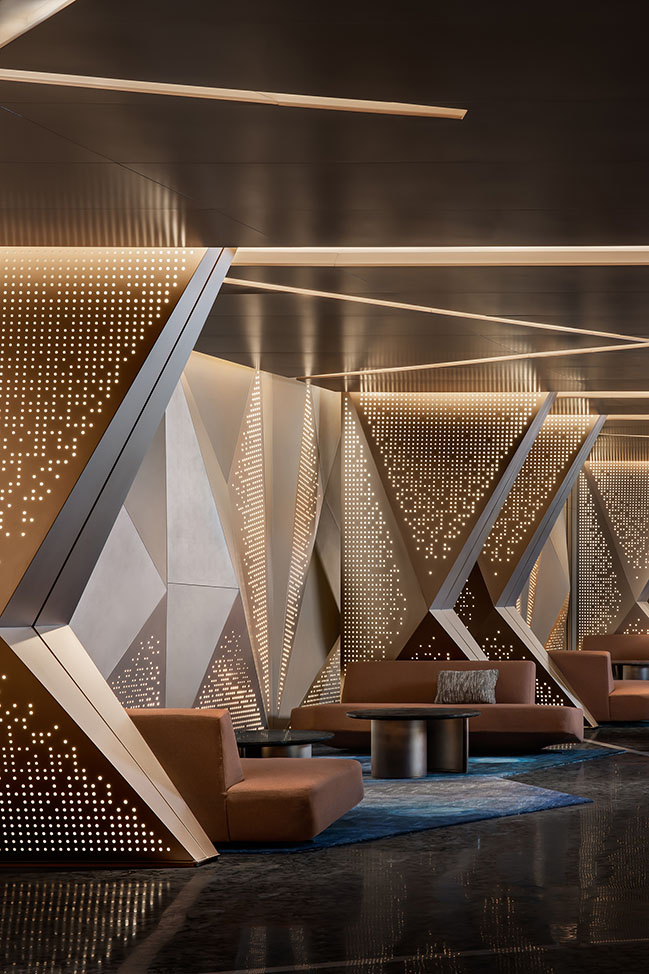 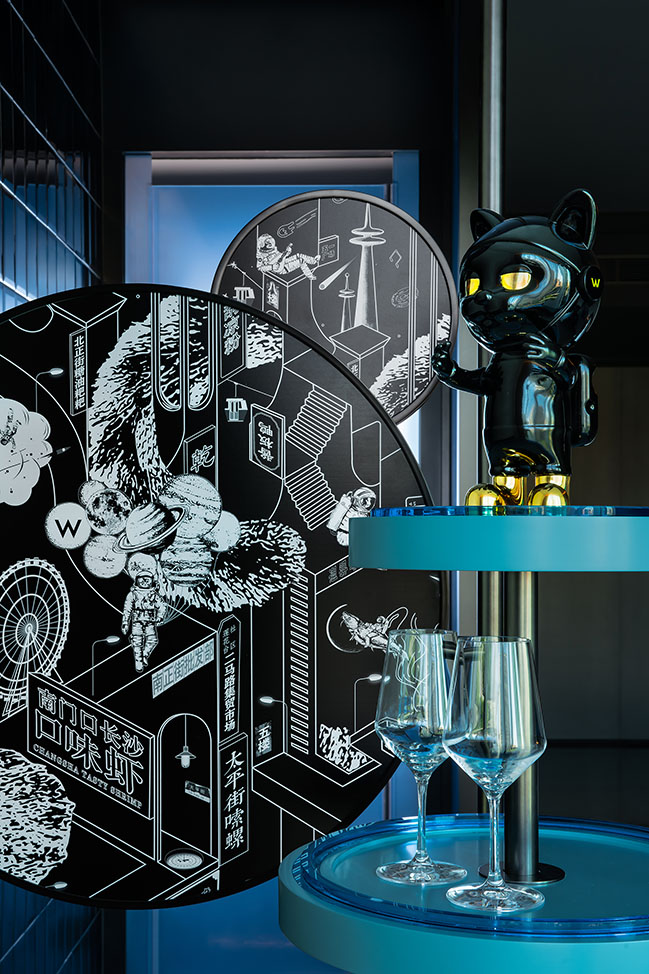 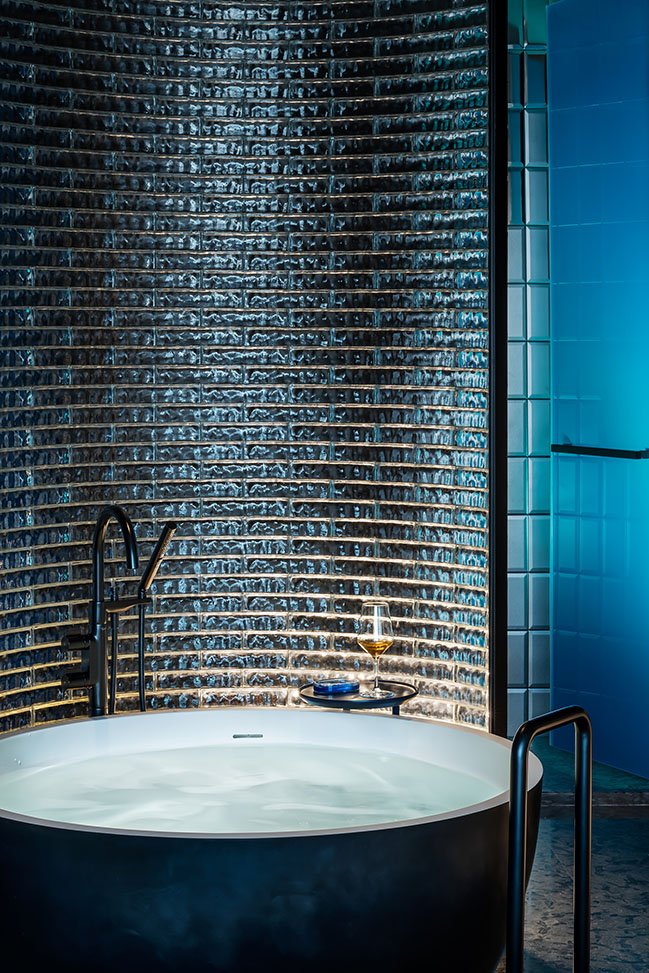 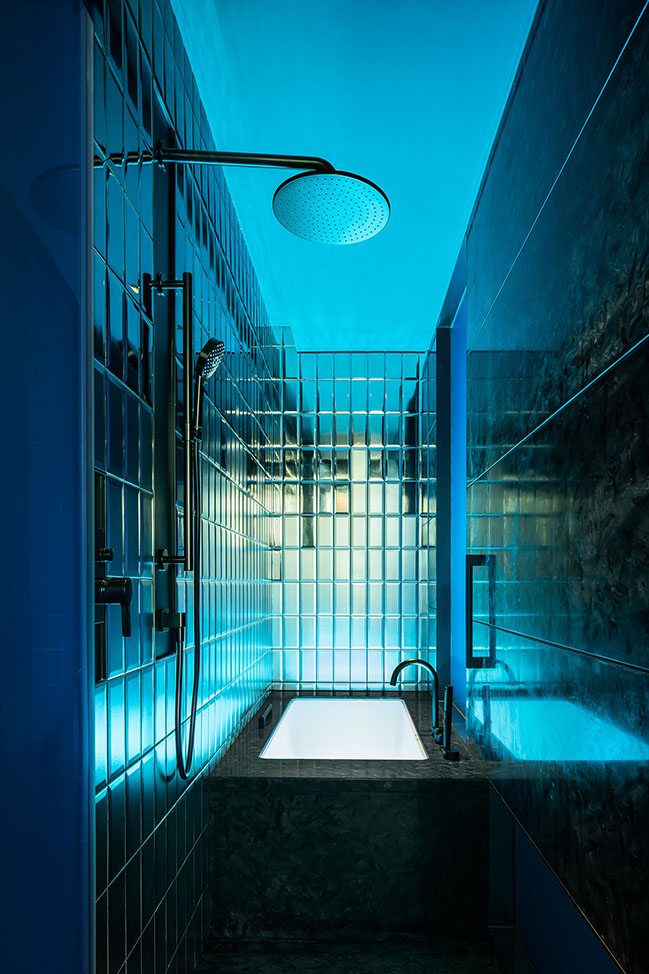 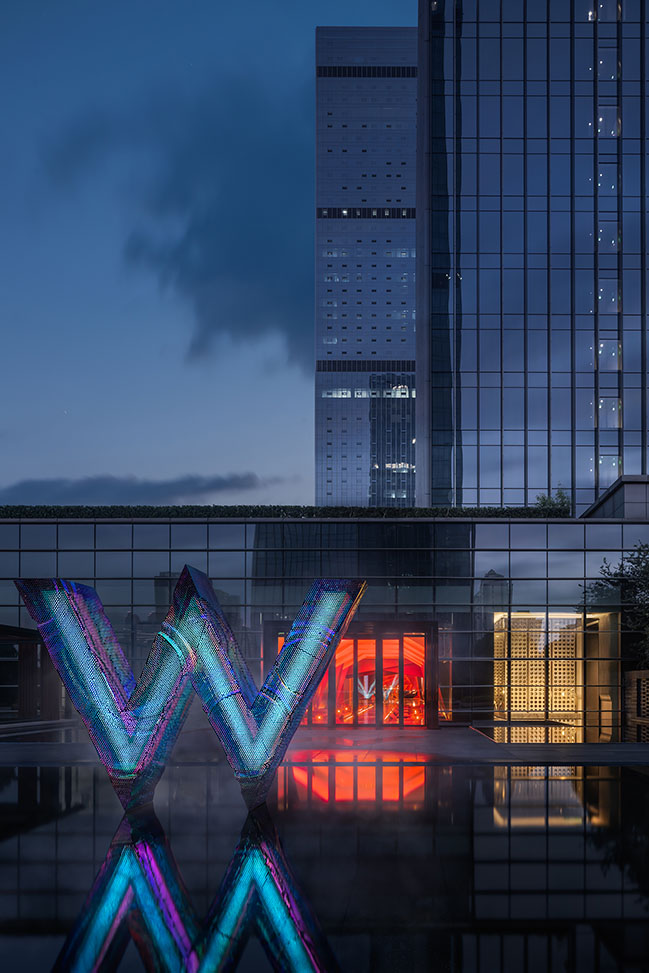 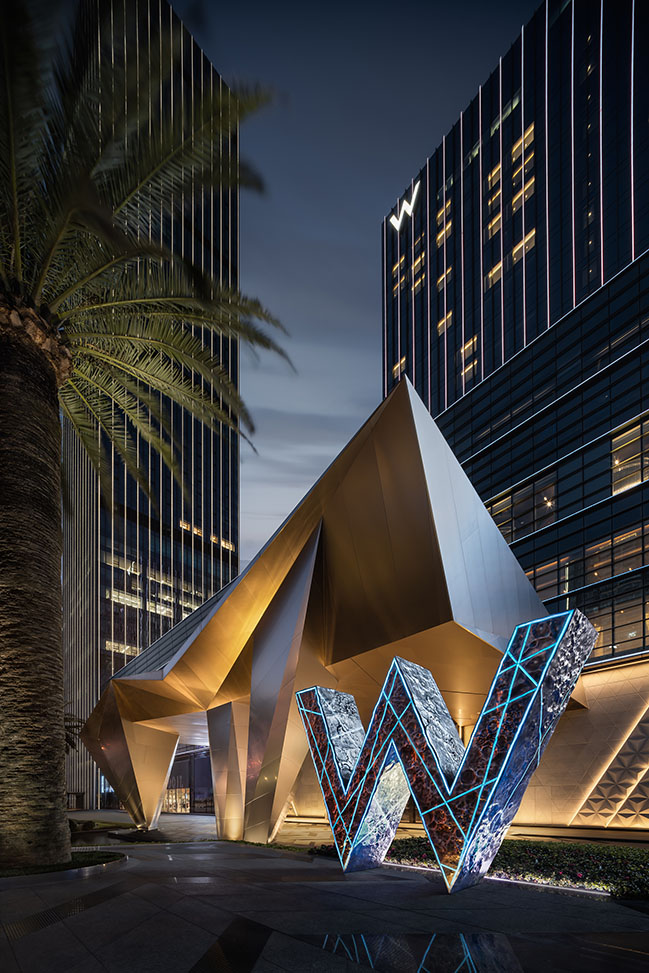 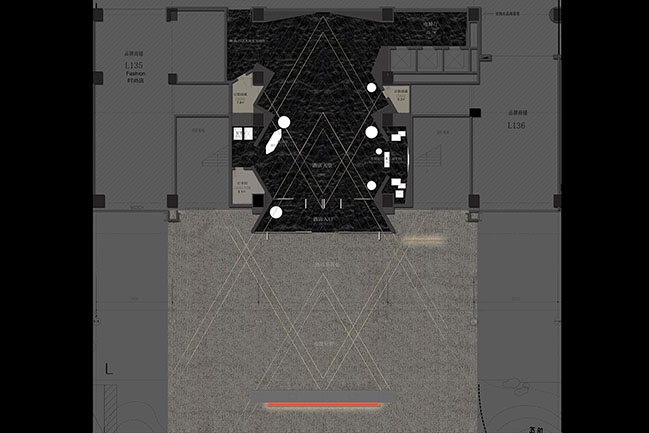 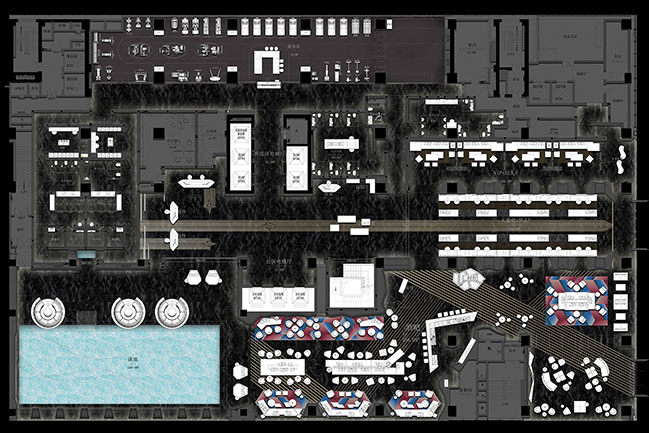 Recommended post: A unique apartment in the center of Barcelona by Coblonal Interiorismo