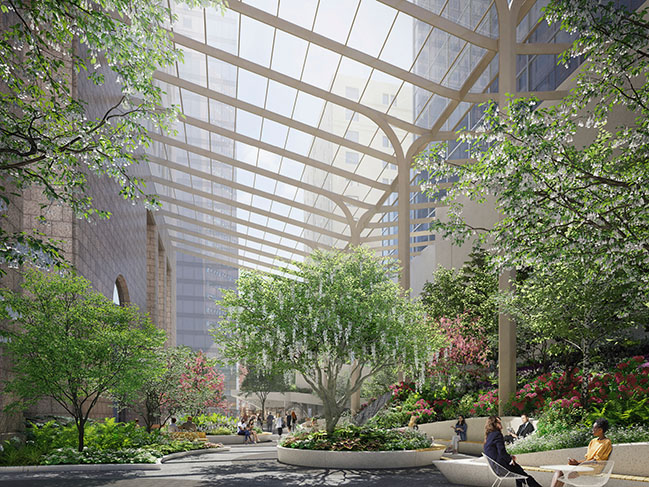 From the architect: Snøhetta’s design for the public garden and revitalization of The Olayan Group’s 550 Madison received final and unanimous approval from the City Planning Commission this week, following the approval from Manhattan Community Board 5 in December. 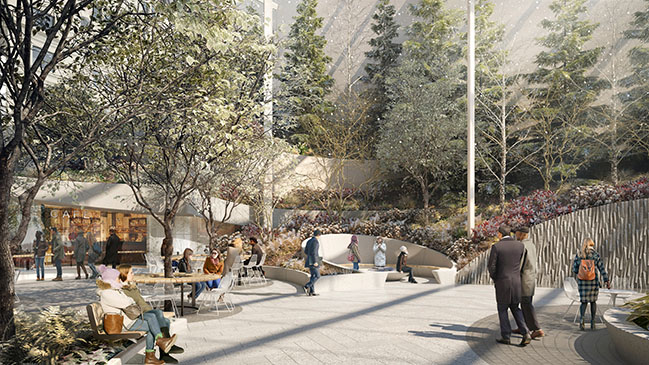 The design re-envisions the building’s public space as a generously expanded, densely vegetated garden.  As a vibrant sensory retreat, its transformation draws upon the architectural heritage, the activity of the neighborhood, and the natural history of the region. As a privately-owned public space (POPS) that invites people to slow down, linger, and connect to one another and their surroundings, 550 Madison’s new garden embraces the powerful contemporary role POPS can play within the context of New York’s ever-changing urban fabric. 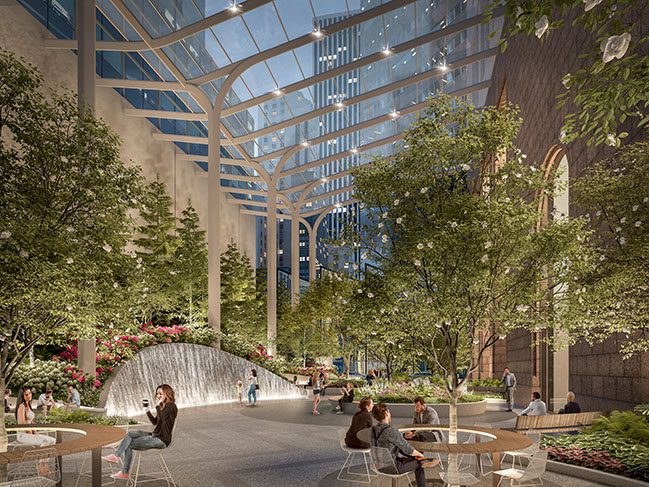 “Privately-owned public spaces are a critical part of New York City’s public realm. Urban life thrives in and around spaces that allow us to connect with one another and to nature,” said Michelle Delk, Partner and Director of Landscape Architecture at Snøhetta. “Moreover, we need to make the most of the spaces we already have and recognize that they are part of a network that contribute to the livelihood of the city. We’re thrilled to be a part of renewing the future of this historic site.”

“Philip Johnson and John Burgee’s vision for 550 Madison was to create not only a unique office building, but a dignified and attractive community amenity with public open space. Snøhetta is restoring their intention for the open space with a reimagined new public garden that will further improve the vitality of East Midtown,” said Erik Horvat, Managing Director of Real Estate at Olayan America. “As the largest outdoor space of its kind in this district, the garden at 550 Madison will be a new anchor point in the heart of Midtown Manhattan, and a huge amenity to the local community and our world-class office tenants.” 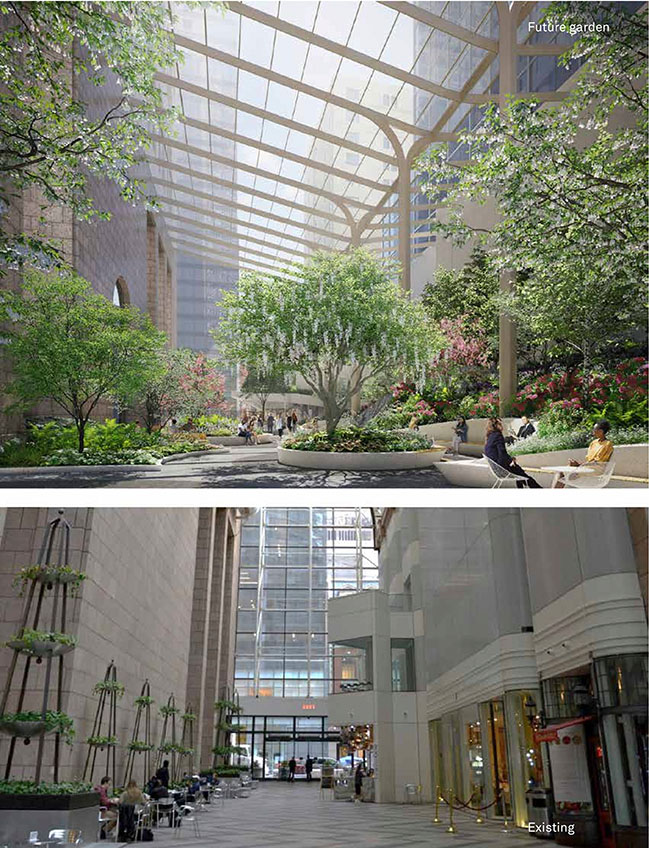 East Midtown is characterized by a density of commercial buildings and retail storefronts, and the neighborhood of Community Board 5 has the least amount of open and recreation space in the entire borough. At 50% larger than the existing exterior public space, the new garden is designed as a complement to neighboring POPS and reconnects the building into the street life of East Midtown, while offering an immersive, verdant respite in the city.

The new garden will open up the public space along the west end of the tower, transforming it into a series of interconnected outdoor ‘rooms’ that provide both quiet spaces and larger, more open areas. Partially covered by a new glass canopy and formed by a series of intersecting circles in plan, the geometry of these rooms takes cues from Philip Johnson’s playful use of circular motifs both at 550 Madison and in his larger body of work. These circular rooms invite passersby to linger as they meander through, allowing the garden to accommodate a variety of experiences for its visitors: to meet over lunch and socialize, to find respite beside the water feature, or to experience a tactile connection to nature. Conceptually, the landscape responds to the canyon-like verticality of Midtown Manhattan, with a verdant, layered topography that lifts up along the west side of the garden, both minimizing the impact of existing tower service infrastructure while providing a sense of being immersed in the garden. 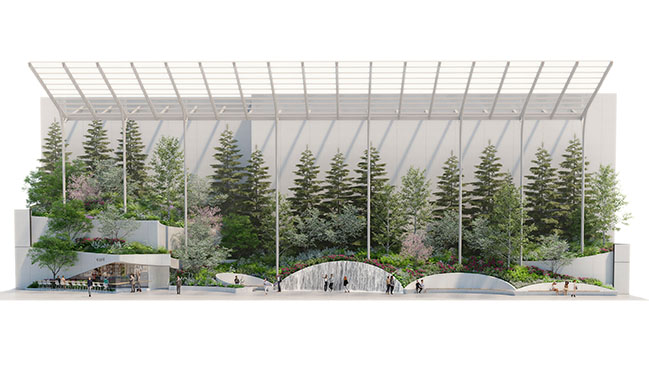 Most importantly, the presence of vegetation along both street edges will announce the entries, creating inviting front doors to the garden.

Carefully selected plantings—including evergreens, perennials, and flowering shrubs— celebrate the dynamic seasonality of the Northeastern climate, creating a garden that is responsive to changing seasons and natural light conditions. Over 40 trees will be planted where today there are none. These, along with other plantings, will encourage a variety of birds, butterflies, and other pollinators to flourish in this shared urban habitat. A central water wall, accessible from the garden and visible from the renovated interior lobby, will provide auditory relief from the commotion of the neighborhood by attenuating sounds of the city. Details embedded in the materiality of the garden tell the many cultural and environmental histories of the site, creating a sense of discovery and intrigue. Information about the site’s environmental history and seasonality will be embedded within the proposed seating and walking surfaces. 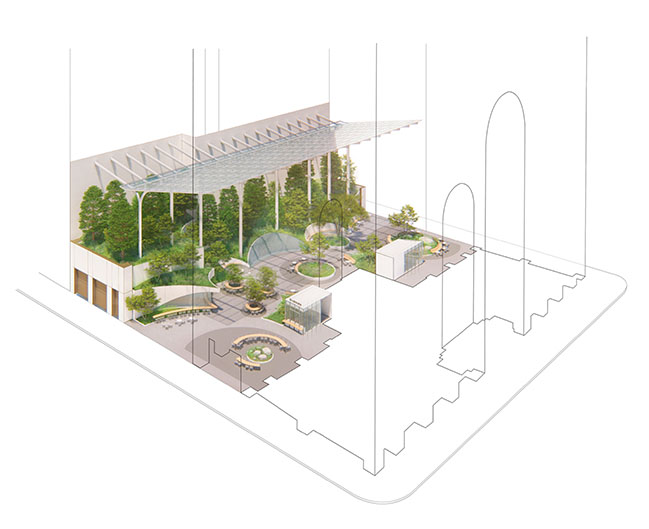 In the tradition of the great pocket parks of New York City like Paley Park or the MoMA Sculpture Garden, the garden at 550 Madison seeks to re-shape how we occupy the city by heightening our attention to our surroundings, encouraging people to stay and take pleasure in a part of the city that is typically rushed through. Together with the revitalized tower, the project better connects the building back into the activity of the street. 550 Madison will lead the transformation of East Midtown as it evolves for the needs of a contemporary workforce and a diversity of tenants, while ensuring it remains a world-class business district. 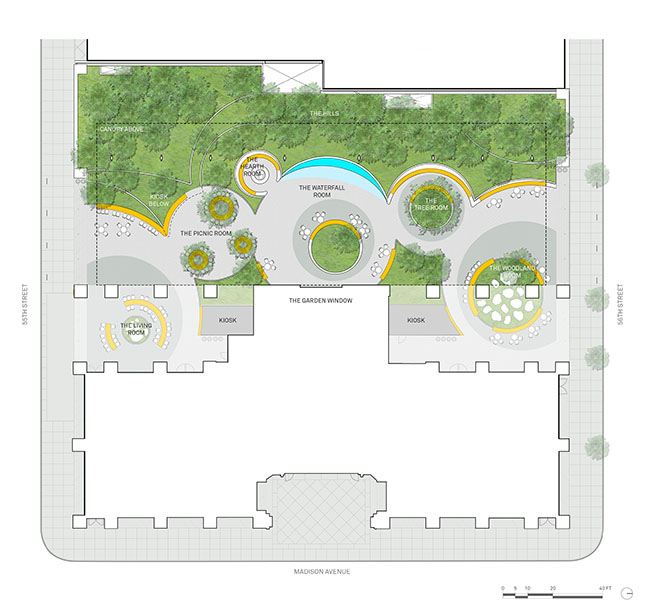 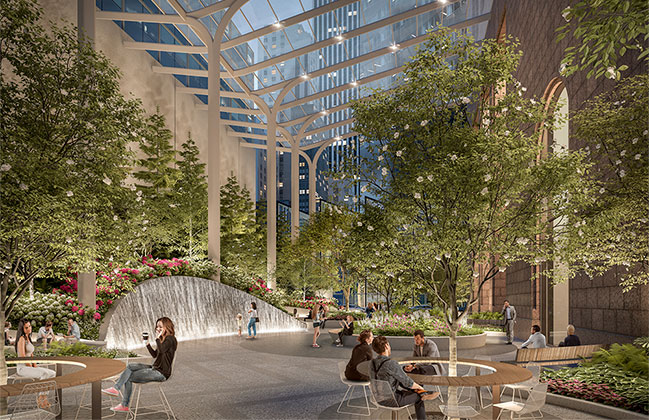 Recommended post: Apartment with a combination of modern and classic