The Alda Fendi Foundation will occupy three historic buildings situated in the ancient heart of classical Rome, right next to the Forum Romanum. The building has been given a strong and certainly unconventional mark by Jean Nouvel, who Alda Fendi called to design the interior and exterior. On the outside original aspects have been attentively restored, whereas inside the spaces have been reclaimed by uncovering the different layers as well as creating completely new elements. The architectural inspiration extends along the entire perimeter, from the Fondazione Alda Fendi - Esperimenti gallery to the twenty-four residences accessible to artists and art lovers. 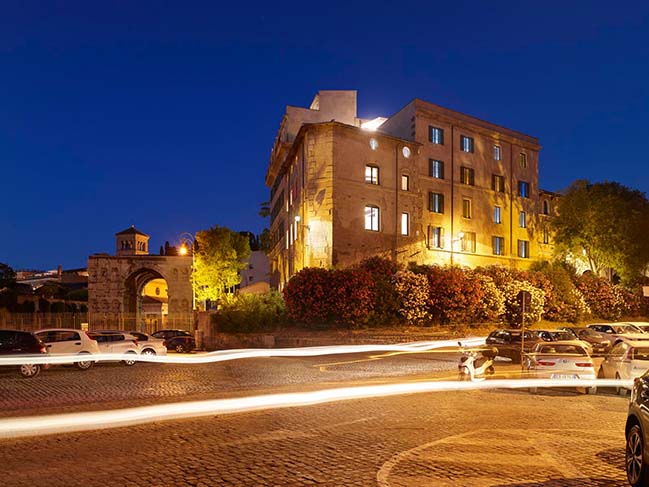 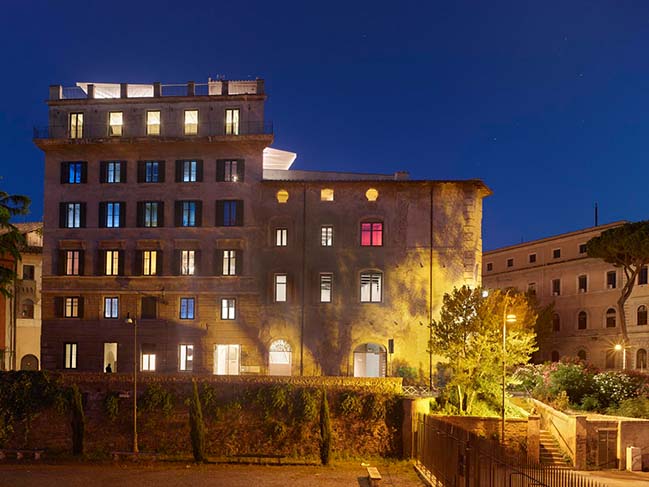 From the architect: It is located in one of the most celebrated places in history: the Roman Forum. The Fondazione Alda Fendi ‑ Esperimenti occupies three historic buildings situated a stone’s throw from the Temple of Vesta and the Arch of Janus. The Fondazione faces the Palatine Hill and has a view over all of Rome, its famous hills and its centuries‑old cupolas. We’re in the very centre of Roman history, in buildings that were once purely residential and which have undergone numerous transformations over the years. The 19th and 20th century inhabitants have left behind them walled‑up windows, strange walls, period tiles and twisted cracks... 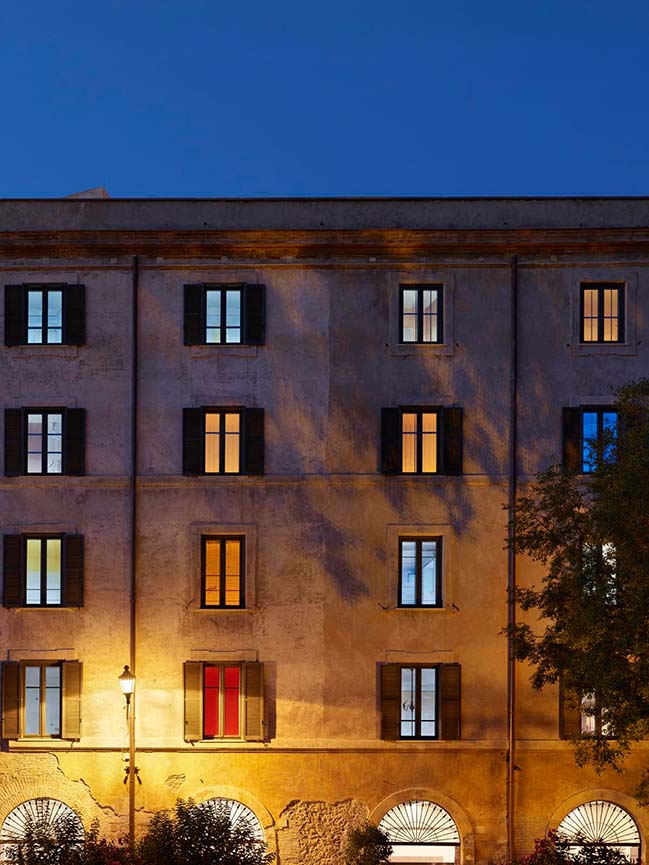 It’s difficult to build in Rome. An architect is logically obliged to respect the hierarchy of historic architecture, so we’re bound by a great sobriety. On the facades we’ve preserved everything that could testify to the passage of time.. emphasizing the different layers to reveal a building that has stopped ageing without the aid of plastic surgery (all its wrinkles are loved and preserved)… This approach anchors these buildings more firmly in history. 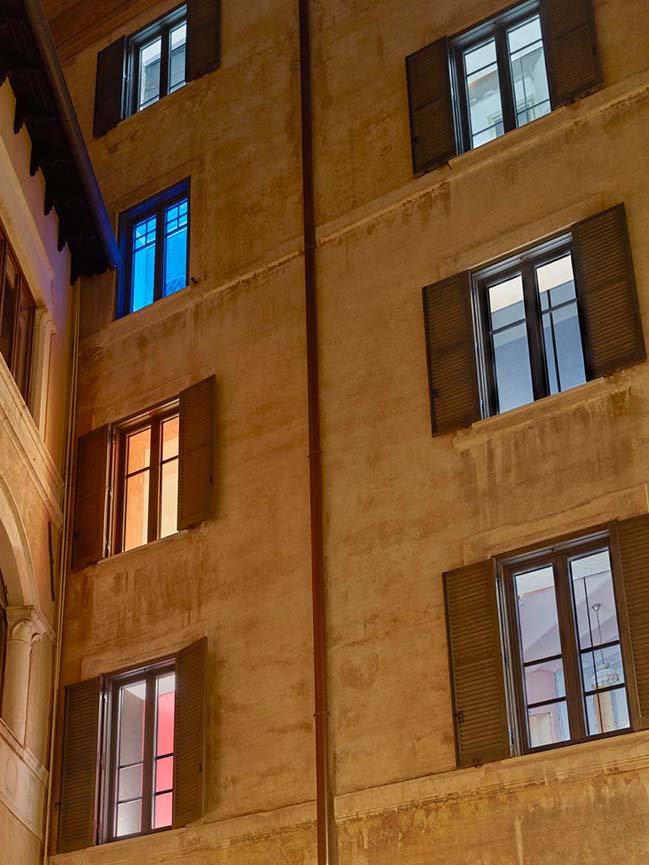 In this context there has been no significant modification of the facades, but a reconsideration of how the surrounding landscape is framed through the windows and terraces. Reassessing the building also means playing with all the interior differences and features to create 25 unique apartments. Each apartment has different views framed by windows changed over time, often narrowed and sometimes even walled up. 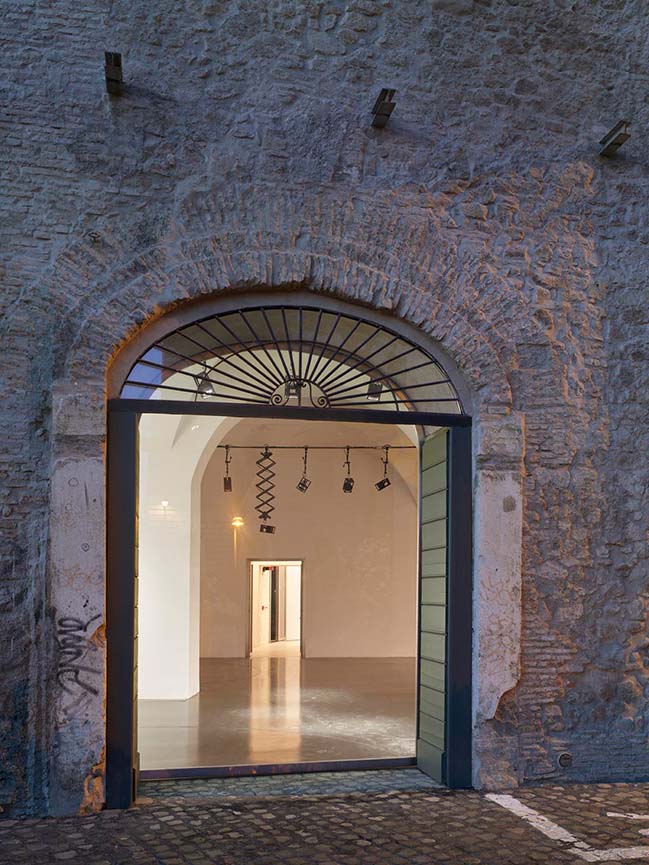 The most significant changes were mostly in the interior. A particular process was conceived, where photographs showing how the apartments looked before the intervention were printed on the internal shutters. Those photos create an internal and external trompe‑l’oeuil effect that captures the natural light like spotlights. When we illuminate the buildings at night the trees growing around them project their shadows on the facades. This nocturnal image becomes even clearer with the colours programmed by the new internal shutters … 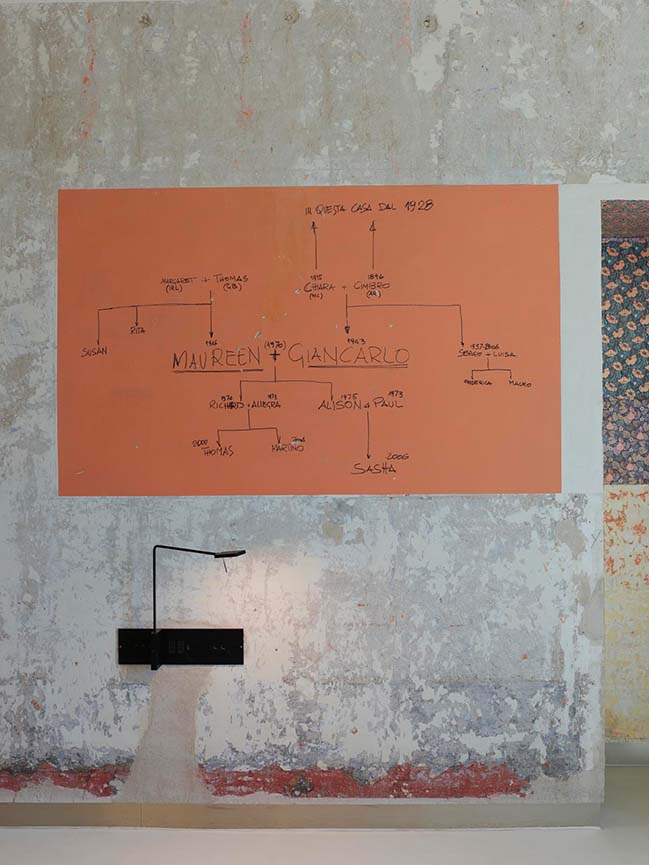 The presence of modernity in the apartments is accentuated by indispensable equipment such as kitchens and bathrooms. These pure and visible objects are blocks of stainless steel that contrast with the patina of the walls, that in themselves are studies of different layers of paint, cracks and heterogeneous materials. A plastic interpretation of the passage of time and sedimentation. 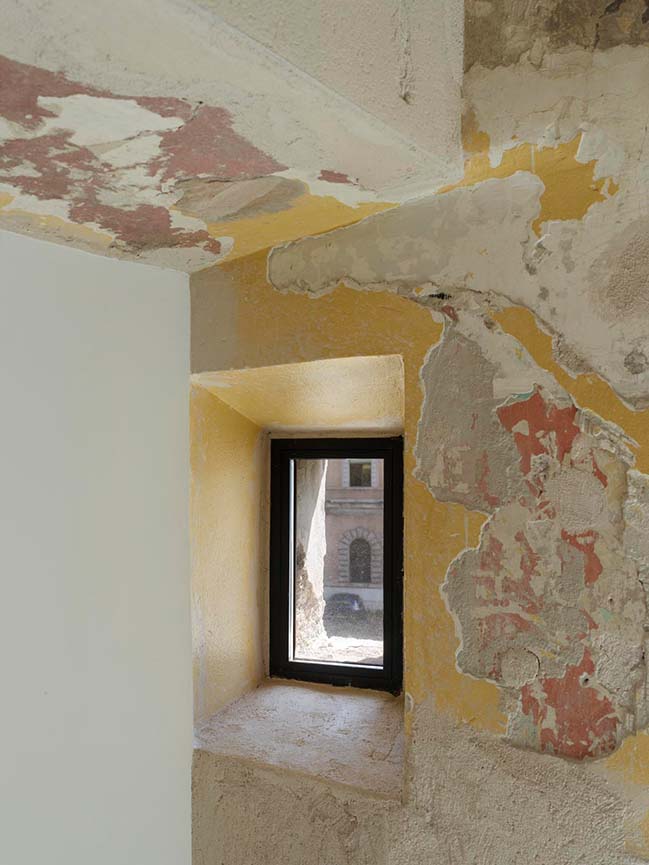 This furniture is positioned in a direct and clear manner. So an optimal contrast is created between the objects of modern life and what remains of this ancient world that received them: the old tiles preserved, the new metal structures for the architraves, the pillars and the stairs plainly mark a new layer in the historic sedimentation. It’s a play of encounters, a collision of epochs from the most ancient to the most modern. It’s a meeting between two worlds, between the traces of the noblest and most spiritual of ancient architecture and these domestic buildings, witnesses that record they’re still alive and vital, that they’re buildings in Rome enjoying a privileged situation. The terrace with its incredible belvedere restaurant is proof of this day and night: it’s an instrument made to be admired. What is also exceptional is its ability to frame what is laid out before it: the ruins and umbrella pines and in the distance the line of the sky, the hills and the Roman cupolas as if in a cyclorama. 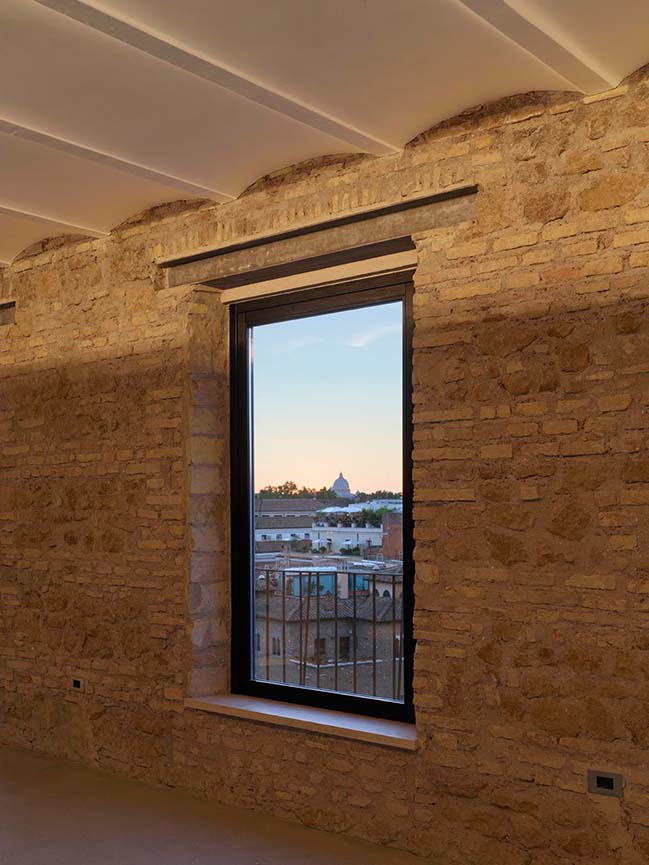 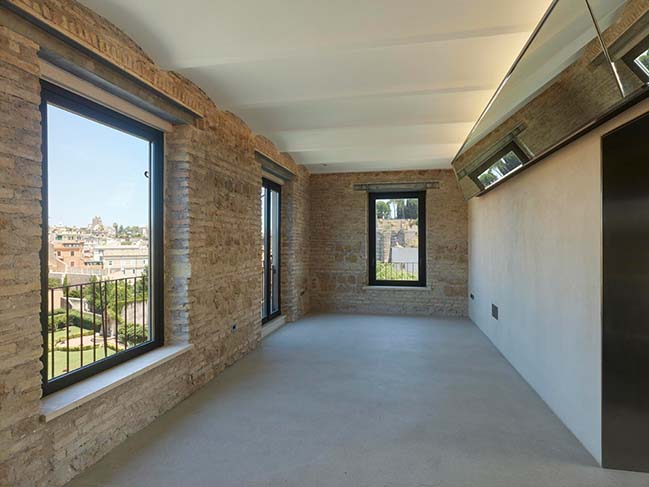 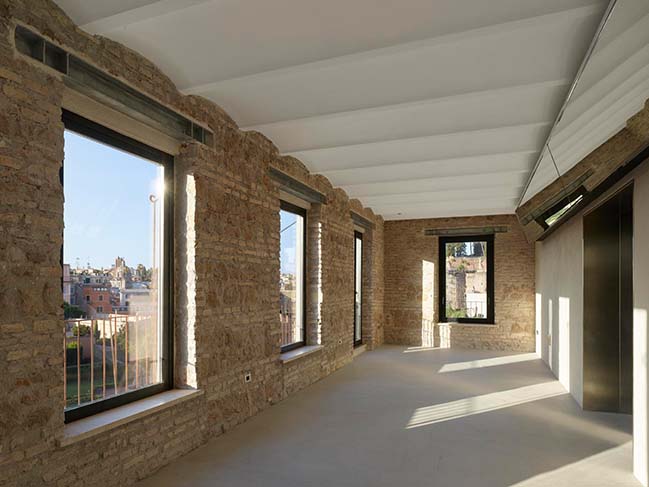 > You may also like: New EPO Site The Hague by Ateliers Jean Nouvel 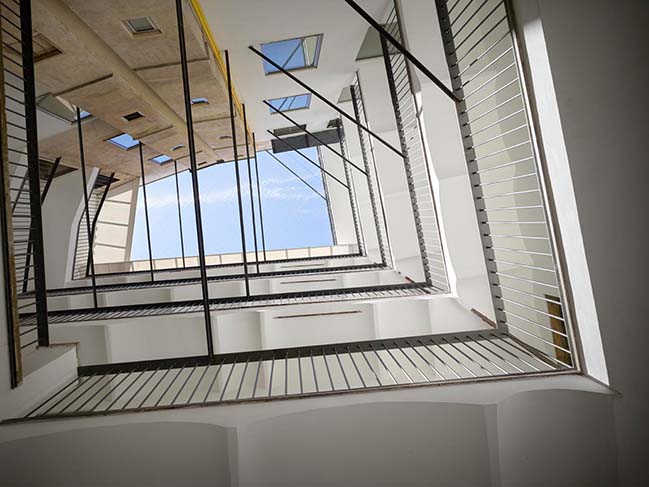 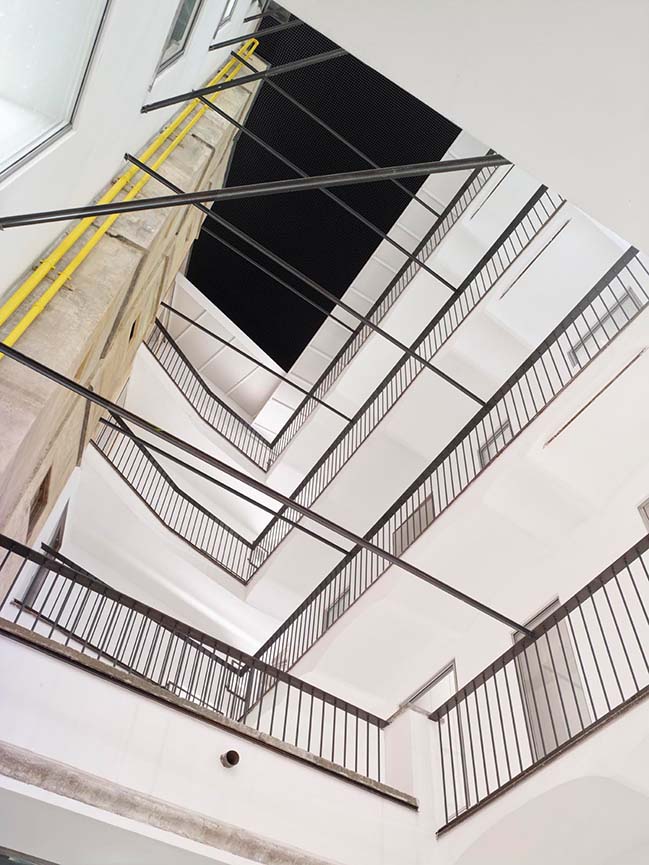 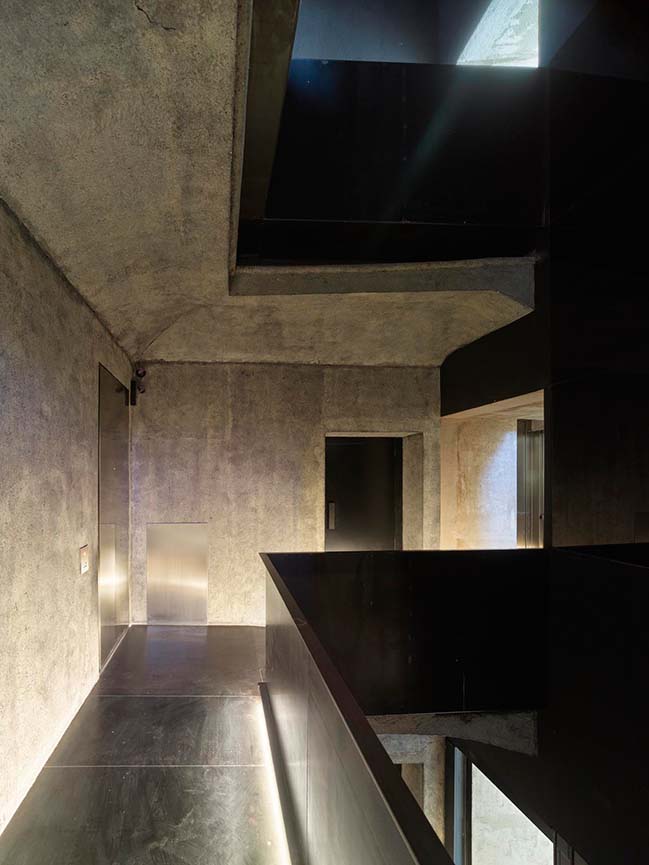 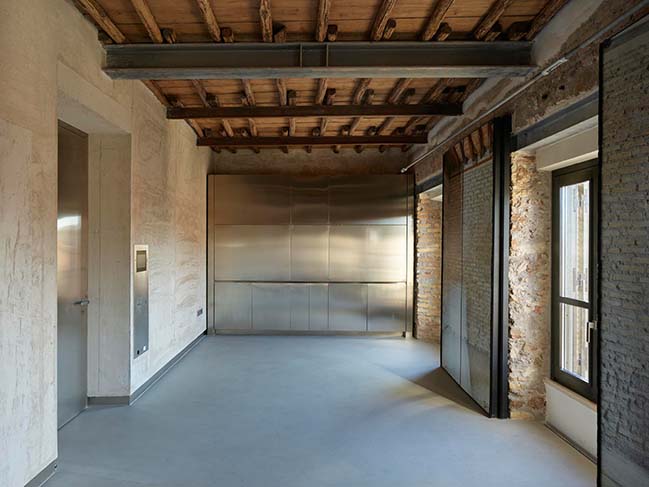 > You may also like: RBC furniture showroom in Paris by Jean Nouvel Design 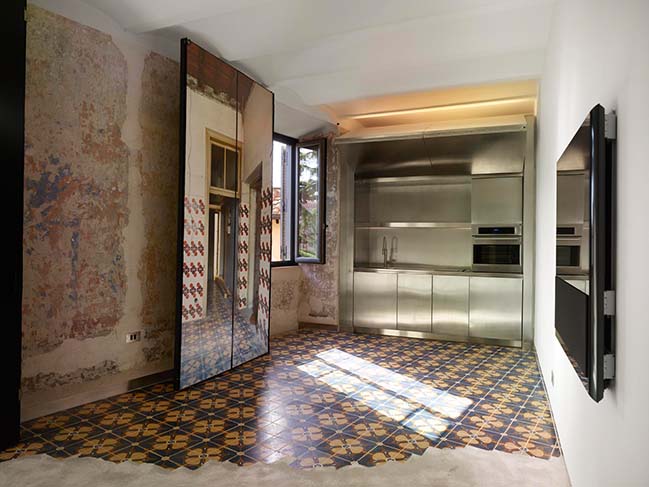 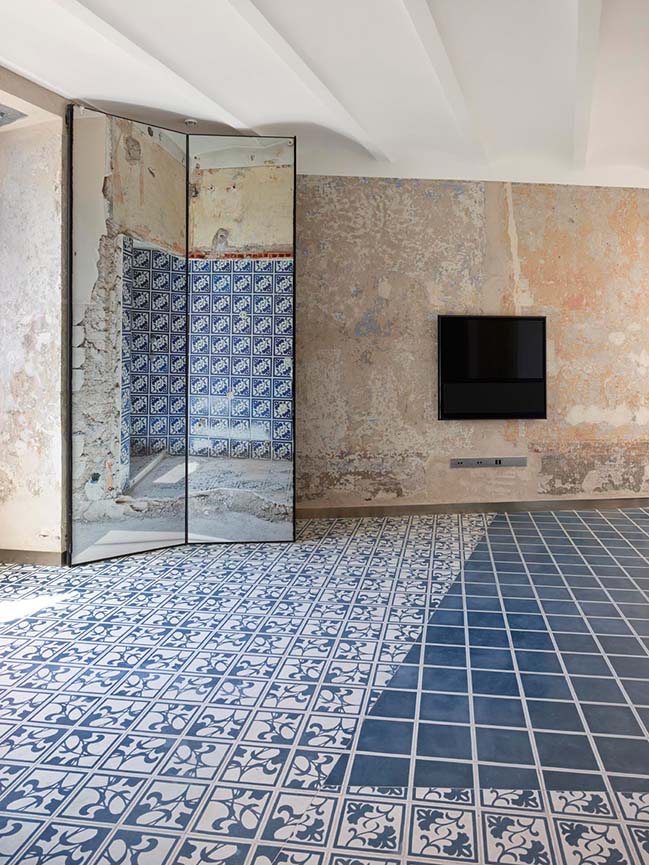 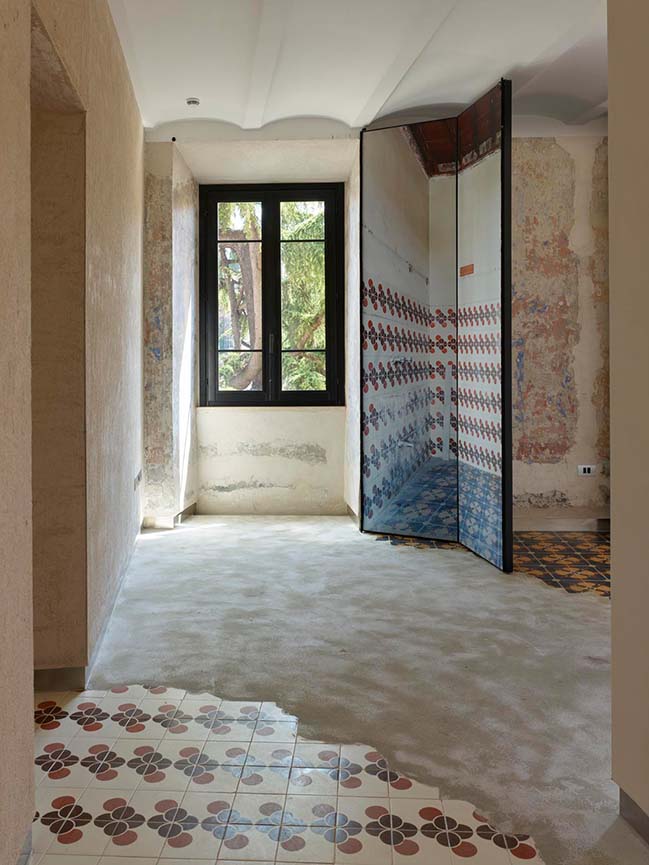 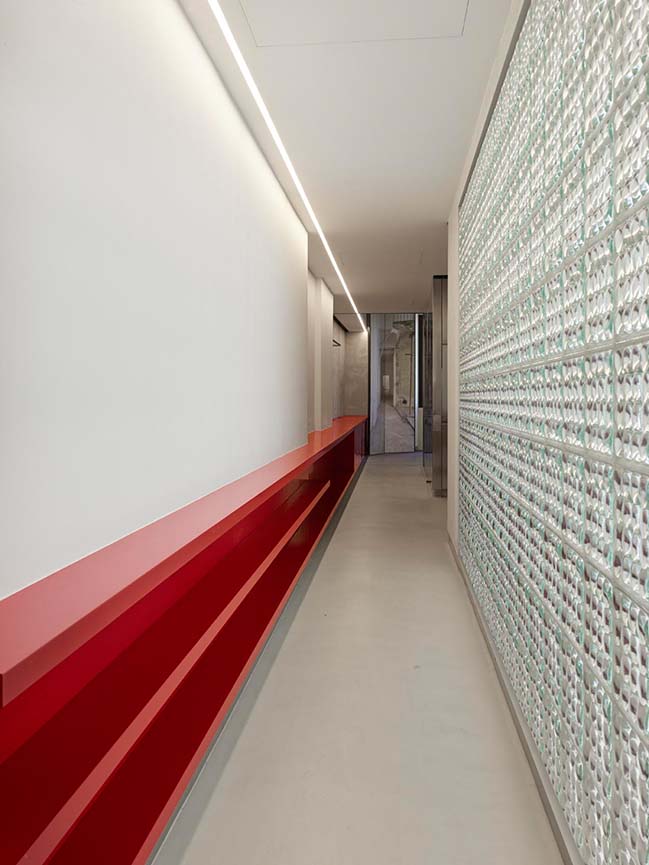 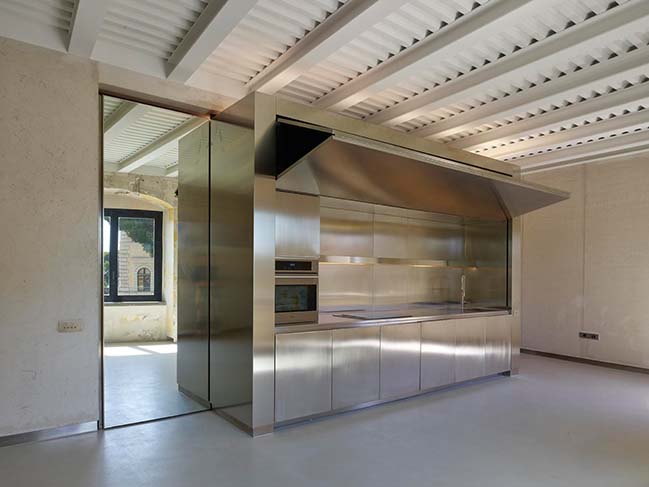 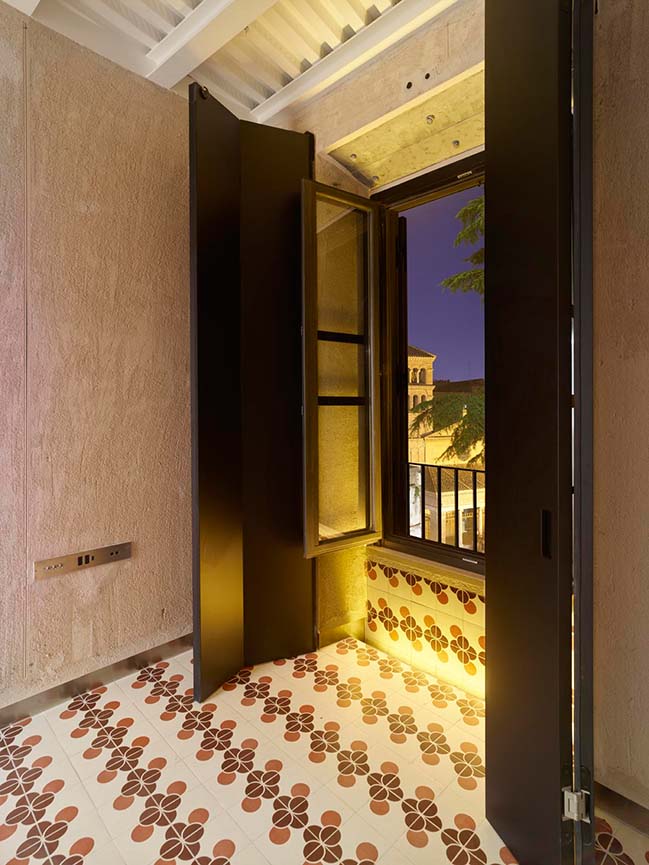 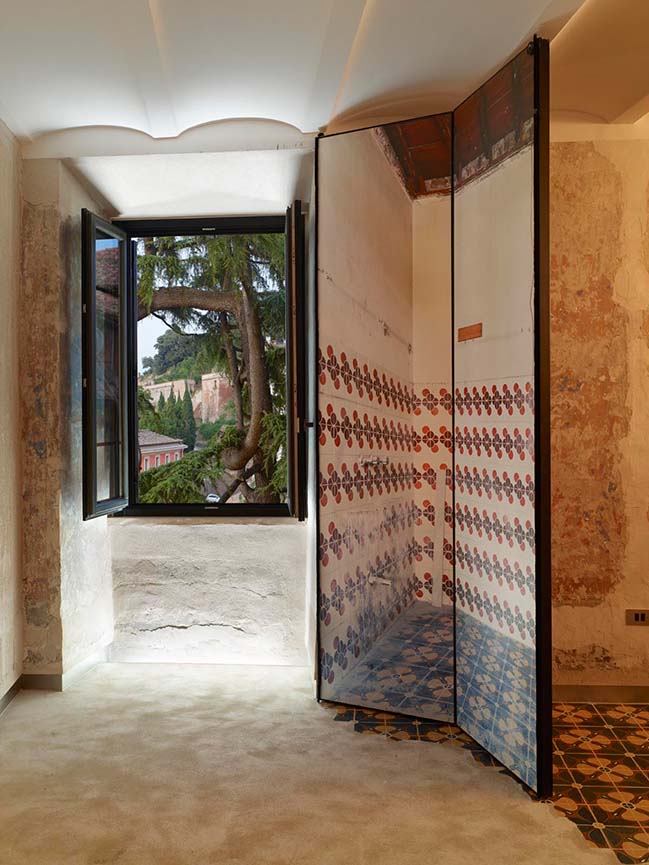 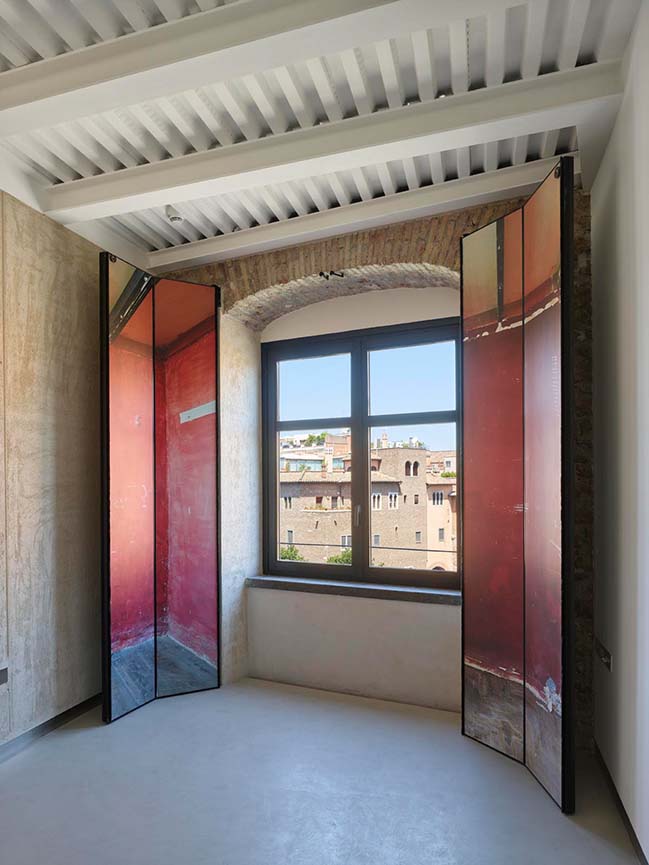 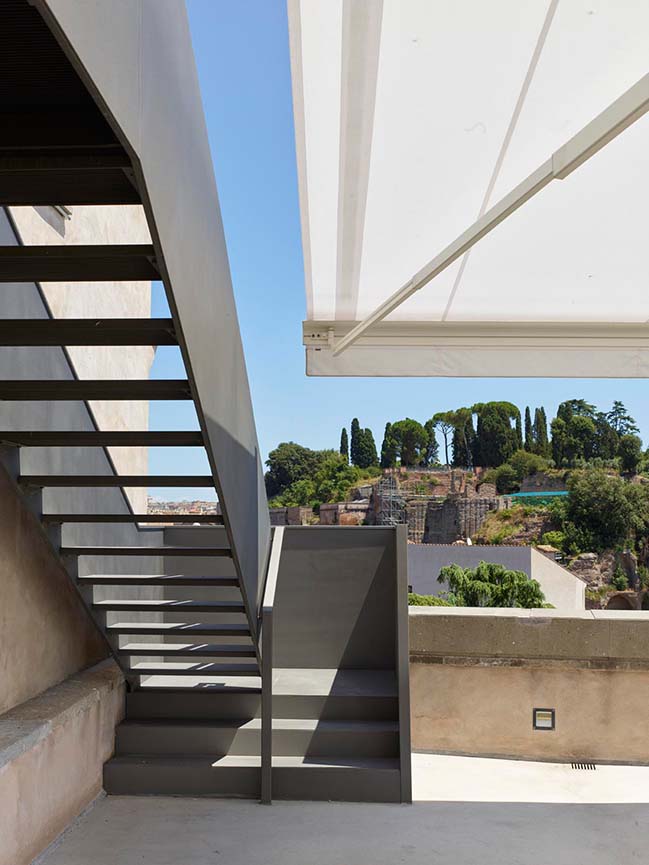 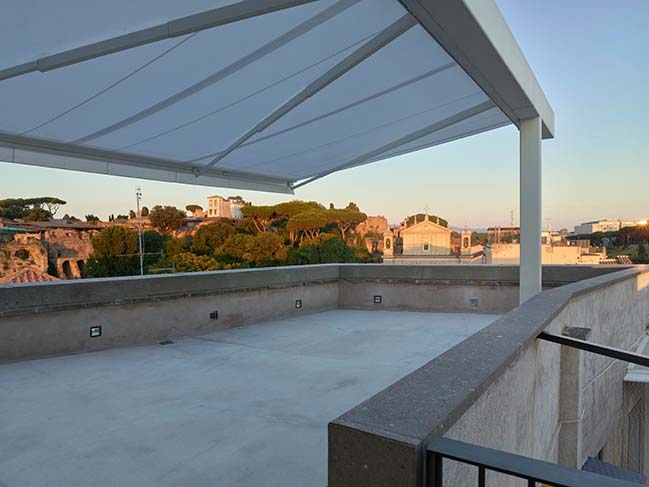 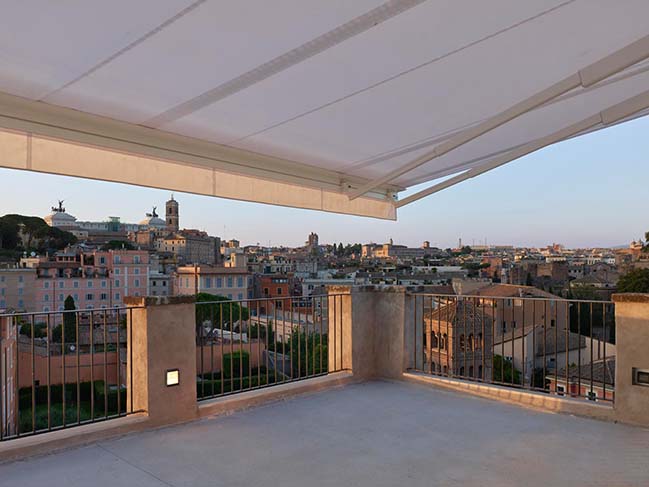 10 / 27 / 2018 The Alda Fendi Foundation will occupy three historic buildings situated in the ancient heart of classical Rome, right next to the Forum Romanum... 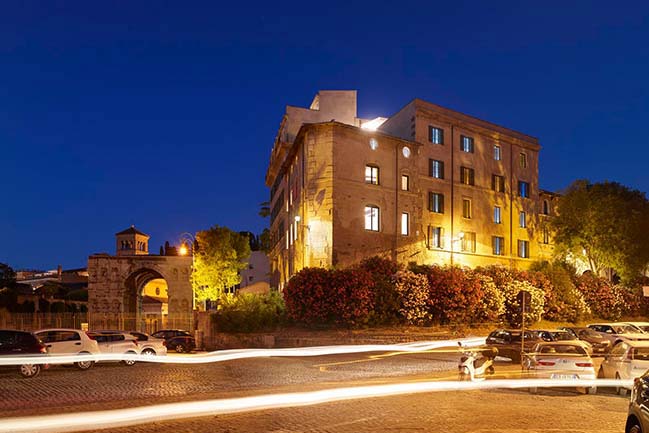