Financed entirely from the Office’s own resources, the new premises are the EPO’s largest single investment in its 40-year history in the Netherlands. With a budget of some EUR 205 million, this new architectural landmark was designed by renowned architects Ateliers Jean Nouvel of Paris and Dam & Partners Architecten of Amsterdam – and Diederik Dam describes it as the slimmest and tallest glass and steel construction of its kind in Europe. 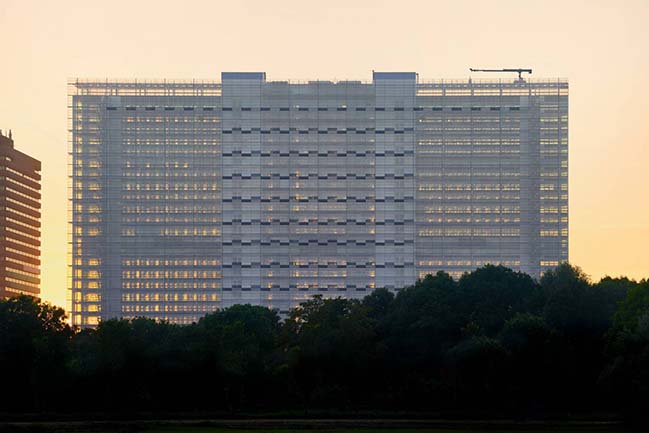 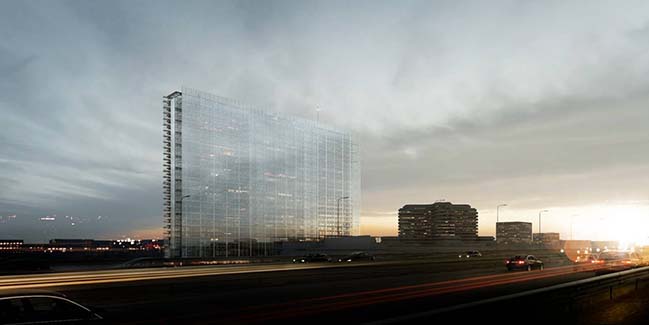 From the architect: The EPO has deep historical roots in Rijswijk, and today it is one of the EPO’s most important sites both in terms of staffing and operations. The new building will replace the current tower that has hosted the offices of EPO staff in Rijswijk for the last 40 years, and before that, the EPO’s forerunner organisation, the Institut International des Brevets (IIB). 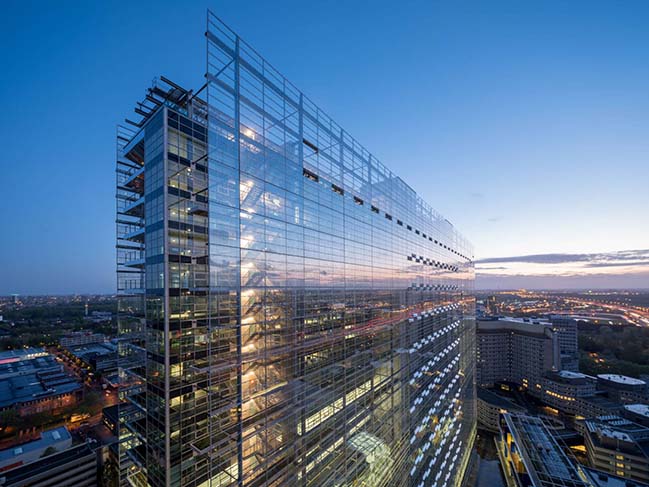 The decision to construct a new building was a result of a firm resolution to provide EPO staff with a state-of-the-art workplace – one that would be sustainable, symbolise the EPO’s commitment to supporting innovation in Europe, and underline its close ties with the Netherlands, and The Hague region in particular. 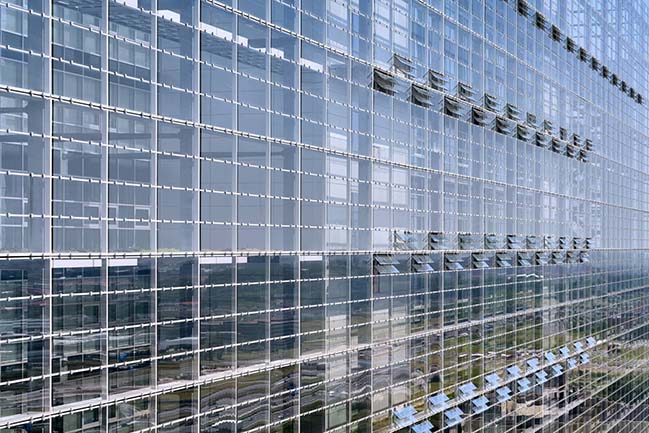 The new building will enable the EPO to utilise greater synergies between its operational units in Rijswijk by bringing them together on one site. EPO staff will start working in the new building from this autumn, and the old tower will be taken out of service and dismantled from October. With landscaping work to take place thereafter, the overall renewal of the site is expected to be completed in 2020. 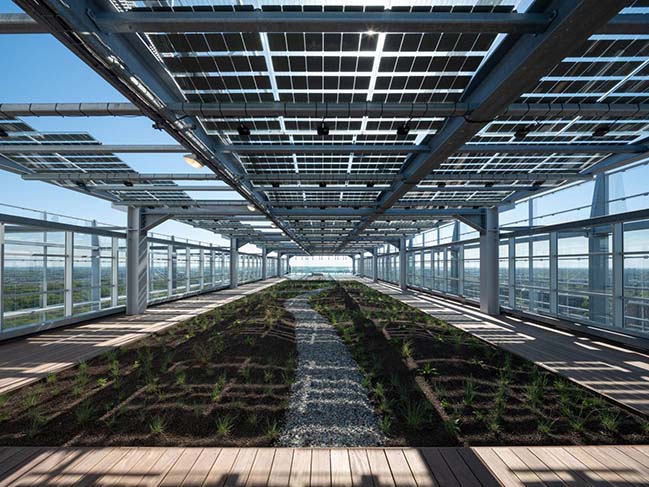 The New Main is the largest steel structure ever constructed in the Netherlands with a design that draws upon the natural landscape of Holland, with its semi-reflective glass surface that mirrors the sky, land and water. The New Main is pure and serene and, in the right weather, the top floors even seem to merge with the sky. The slender shape of the 27-storey building allows the light to pass through, inducing a sense of transparency as it appears to float effortlessly. Due to its double-glazed coated façade, the 960 exterior glass elements become its defining characteristic. 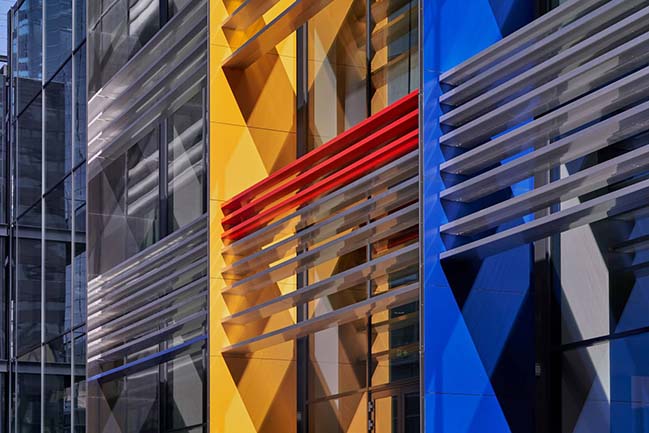 After several decades of use, the present main building had begun to show signs of wear due to ageing and Holland’s windy, often rainy climate. The New Main building was created to replace it, providing an opportunity to design a modern, comfortable workplace for some 2 000 EPO employees. 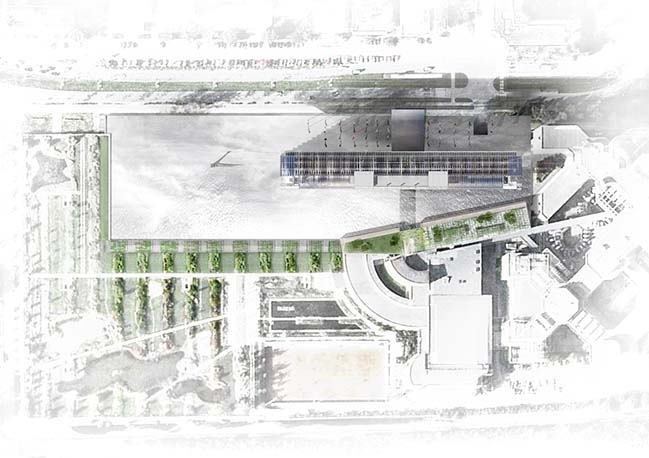 Behind the prominent high-rise is the four-storey New Hinge. It will house an extension of the seating area of the restaurant, eight meeting rooms for oral proceedings, a new fitness area and meeting rooms, and have a jungle-like atrium. Glass, steel, plants and various colours have been used to create a remarkable design. 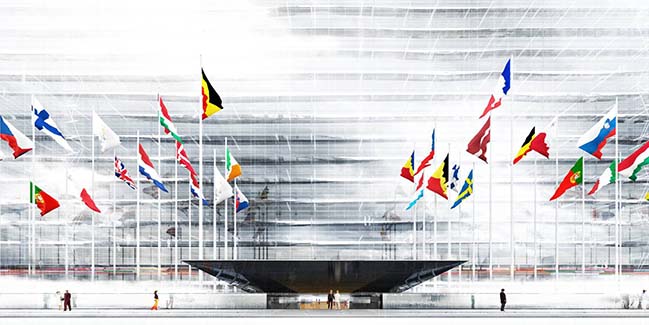 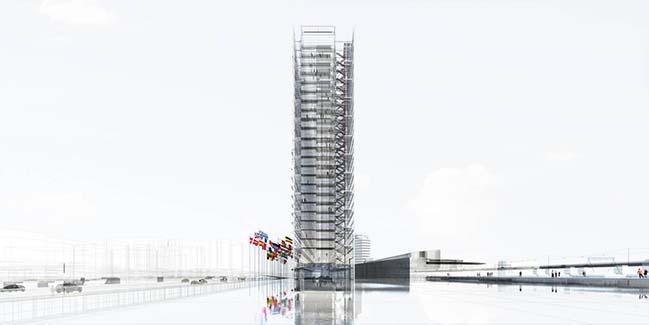 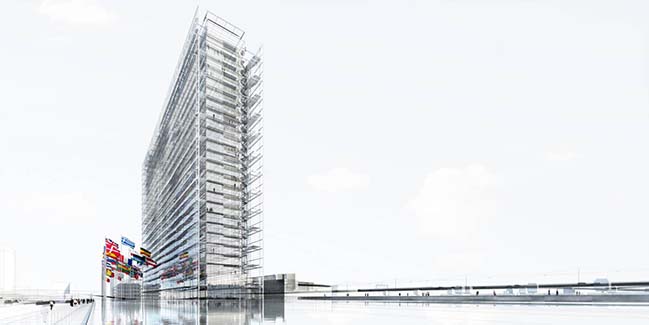