The aim of the Badaevskiy Brewery project is to redevelop the six-hectares old factory area, between the Moscow River and the vector to Minsk, and to transform this famous but largely abandoned and dilapidated site into a vibrant destination point in central Moscow. 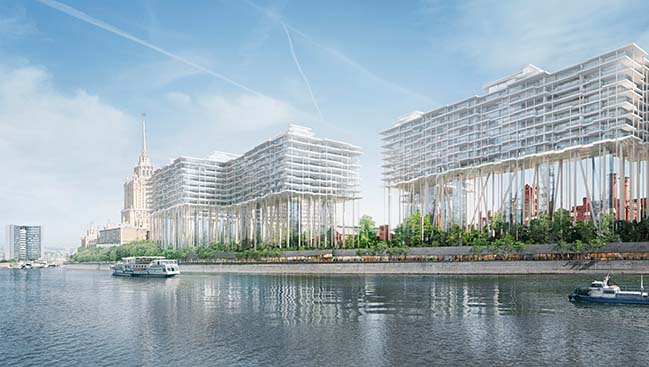 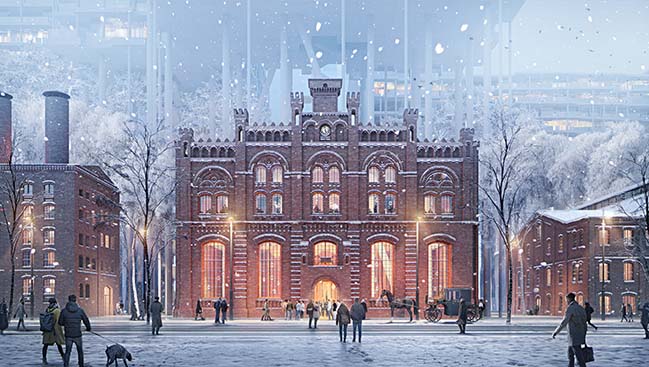 From the architect: The factory grounds and river embankment are to be opened to the city; the old industrial structures are to be assessed, with more than 30’000 m² of them restored and brought back to life through new internal organization and uses; and more than 100’000 m² of new residential, office and retail program is to be added in order to rejuvenate the site, support the complex renovation, and provide quality residential, work and recreation areas to this prime location. After an initial feasibility and concept study, Herzog & de Meuron were formally appointed for the design of the Badaevskiy Brewery Project in 2017.

Jacques Herzog: “Moscow is a city with a rich and controversial cultural and political heritage, with architectures reflecting avant-garde as well as conservative trends in the course of history. Our project for the redevelopment of Badaevskiy factory inserts itself in this very history and tradition of Moscow urbanism – it respects and re-uses existing industrial buildings while adding and overlaying them with radically contemporary structures.” 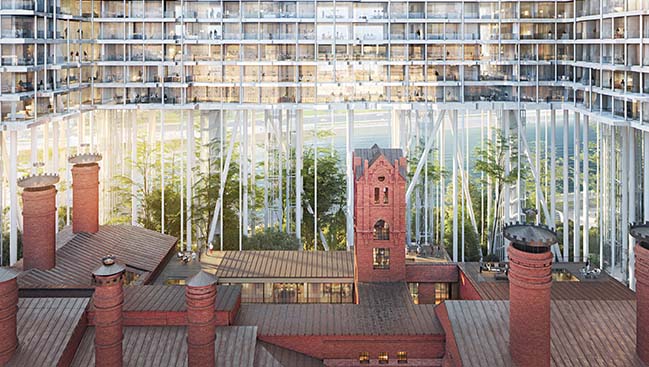 Short History of the Site
Three distinct steps of historical development define the current state of the neighbourhood. In 1875 the famous brewery was founded as the Trehgorniy Factory, located just outside of the Moscow city walls, seven kilometres from the Kremlin. The factory grew typically for a manufacturing complex of that time, characterized by a brick industrial architecture, with a monumental representative front and a disordered agglomeration of support buildings growing organically at the rear towards the river. In the 1950s, the Kutuzovskiy Prospekt cut through the old random city blocks and, lined up with the uniform neoclassical 12 storey residential buildings, formed the straight western vector of the now prominent radial scheme of Moscow. At the turn of the 21st century the construction, across the river, of Moscow City – the skyscraper business hub of Moscow – introduced a radically different high-rise scale and materiality to the site and to the whole of Moscow.

Constraints and Conditions of the Site
Since the closure of the brewery in the 2000s, the buildings fell into ruin, and despite sporadic uses, remained largely abandoned. Today, from the three original main factory buildings, built between 1875 and 1912, only Building 1 – a Russian Romantic Revival arcaded building on the eastern part of the plot – and Building 3 – an English style industrial cluster with characteristic silos on the western end – remain. Building 2, the centrepiece of the historic ensemble, was lost. The current urban and heritage regulations, have given cultural heritage status to the ensemble and require preservation of the original brick factory structures of Building 1 and Building 3. The remaining part of the site is open for new development, within a height restriction of 75 metres. Under these regulations, the project undergoes a series of consultations with authorities and municipal specialists, and heads toward an Expertiza process and Construction Permit. 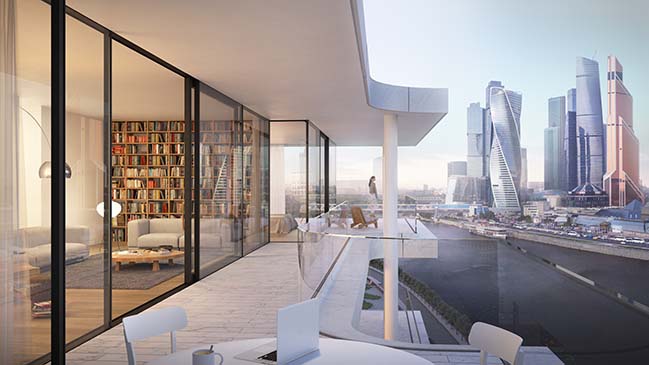 The Given as an Inspiration for the New
The found structures and the history of the site inform and inspire all our urbanistic and architectural interventions: the elevation of the new building, as well as the spatial continuity of the park and gardens beneath. We found it extraordinary and especially appealing to use the opportunity to push such a radically different urbanistic approach in a city which has traditionally preferred tabula rasa concepts, in the Soviet as well as the post-Soviet periods, as so perfectly demonstrated by the nearby examples of the 206-metre high Ukraina Hotel (one of the iconic Moscow Seven Sisters high-rises), the Kutuzovskiy neoclassical blocks, and the more recent 350-metre high Moscow City.

Renovation and Revitalization of Historic Structures: Buildings 1, 2 and 3
Through the clearing of the unimportant and unprotected structures, the site opens, for the first time, to the city and the neighbourhood. A new park connects the site with the river, and the heritage buildings are revealed and made accessible. Building 1, a pair of historical structures of 20’000 m² will host a food market, fashion store, co-working space with conference centre and a large gym. These diverse functions are united by connected central atriums and covered by top-light wooden roofs, reconstructed to their original geometry. Building 2, the lost heart of the complex, is built anew in solid brick to its original design, following historical documents. The 3’000 m² building will retain a large grand hall space and bring back some of the original functions of the complex with a small local brewery. Building 3 is a 15’000 m² complex agglomeration of separate parts on 8 floors of variable heights, each with its own facade and symmetry, yet all combined into a single whole by its brick structure and facade and common industrial use. Four new internal light wells together with an existing courtyard, bring daylight into the deep floors and emphasize the original vertical cluster structure of the building, without interfering with the historical outer envelope. In the resulting building volume, new functions, such as a traditional Banya, arts centre, childcare facilities and a maze of apartments are opportunistically jig-sawed together and exploit the specific diversity of the existing spaces: former industrial halls, production rooms, industrial cupolas, neo-gothic water tower and silos. Together, the three heritage buildings, with their restored front recreate the representative brick face of the historical Badaevskiy Brewery and become the monumental heart of the new complex. The buildings’ rear facades, revealed after the demolishing of the support structures and opened now to the park and the river, continue the solid brick materiality and reflect the new internal organization of the buildings. 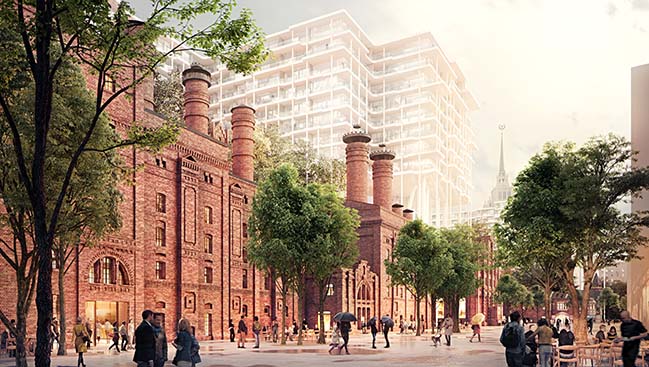 A City Block Lifted up in the Air
The new building on the site could be described as a piece of city lifted up in the air. This "Horizontal Skyscraper" is the result of a research phase where we tested and tried out all kinds of building typologies along the riverfront, but whatever we tried felt wrong. The greatest problem was that any new structure on the ground would have divided the site into privileged and less privileged areas, into front and back sides, and the amount of public green would have been reduced to a minimum. It was obvious that we started to lift up in the air the piece that we had tested on the ground before, although we were hesitant to come up with a building typology which is so remindful of the "Wolkenbügel", one of the most heroic icons of the Russian Avant-garde. But here it didn't look heroic or monumental. The building does not fly; it rather sits on many slender stilts like an elevated lodge in the forest. The stilts connect the building with the ground and the park like trunks of trees.

The single operation of elevating the new building 35 metres up in the air brings three key advantages for the project: first, the new green area, an urban park, emerges in the vacated land under the hovering structures, between the heritage buildings and the river front; second, despite the substantial densification of the site, the historical buildings retain their direct connection to the river and their clear visibility and access to the city; and third, all the flats in the hovering structure are top floors with prime views to the Brewery, Kutuzovskiy Prospekt, Ukraina Hotel, the State Duma, Moscow City, and beyond to greater Moscow. Running along the riverfront plot line, the new lifted building follows the outlines of the heritage structures and the established north-south orientation of the old industrial grid. The resulting undulating form resembles the geometry of the meandering waterfront buildings in this part of historical Moscow and maximizes the views out to the river.

The elevated building consists of approximately 100’000 m² of residential area. The apartments are highly individualized in terms of layout and facade expression and command sweeping panoramic views with their fully glazed facades. Each apartment has a large balcony, a truly private exterior space in the centre of Moscow. The largest external spaces are located on the roof, belonging to the eight sky villas, where rooftop gardens complete the top of the hovering building. A single underground complex on three floors inhabits the entire site, connects and serves all the buildings and provides the required parking, delivery and support facilities.

Public Green − a Place for All
The greatest benefit of the Badaevskiy Brewery development is that it creates new urban spaces accessible for all: along the Moscow River it opens up a new and highly attractive stretch of promenade and boulevard with restaurants, bars and shops. Between that river promenade and Kutuzovskiy Prospekt, a new landscape is implemented that maximises the green areas with transitions between public, semi-public and private zones, and gradual shifts from lawn areas, to low greenery, to high forest-like planting. The entire plot is kept exclusively pedestrian and permeable to provide easy and direct public access from the river promenade to the microcosm of activities in the new Badaevskiy Brewery project and opening, for the first time through this site, new links between Kutuzovskiy Prospekt and the Moscow River. 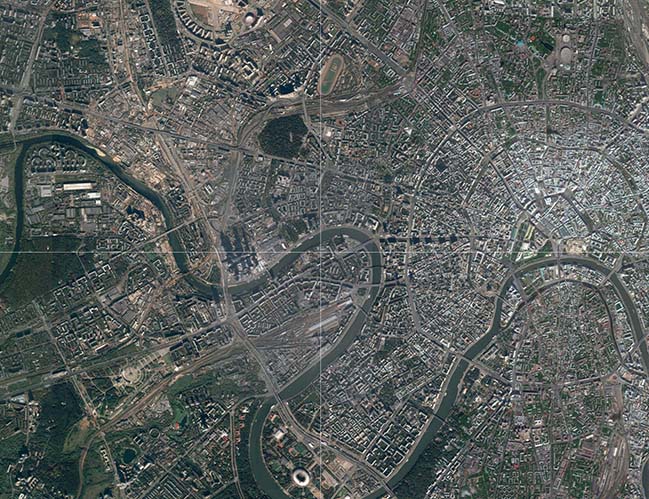 03 / 22 / 2018 Herzog & de Meuron redevelops the six-hectares old factory area, between the Moscow River and the vector to Minsk