The transformation of the former Dreispitz customs depot into a mixed-use urban neighborhood is one of the most extensive urban development projects in 21st-century Basel. It is under the aegis of the Christoph Merian Stiftung as owner of the land, together with the Canton of Basel-Stadt, and the Genossenschaft Migros Basel, which has been active in this location for 30 years. The Nordspitze, the northern tip not only of the Dreispitz but of the entire agglomeration of the Birstal, adjoins Basel’s city center. It is also the eastern continuation of the lively Gundeldingen neighborhood, dating from the late 19th century and identified by a largely orthogonal street grid. 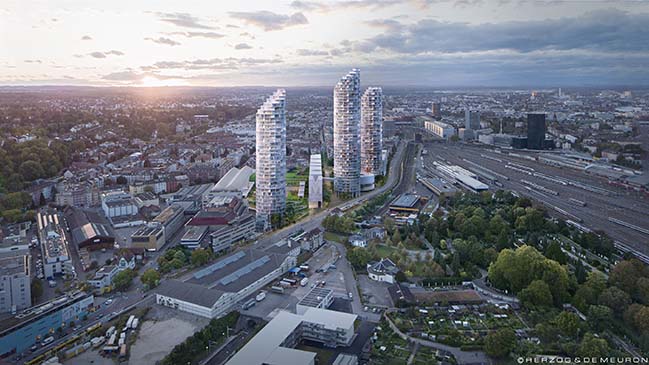 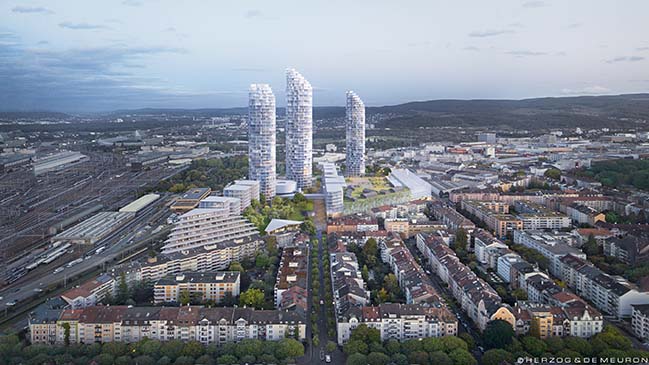 From the architect: The urban proposal for the Nordspitze is based on what would seem to be the mutually exclusive aims of creating a dense urban area and expansive public green spaces. These complementary opposites determine each other, leading to the design of an extremely dense urban quarter with a diversity of open spaces for the neighborhood and the city.

The density is ensured by three high-rise buildings and a permeable block consisting of single mid-rise buildings similar in height to those in Gundeldingen. These individual buildings stand close together around a publicly accessible space – in contrast to the continuous street fronts in the historical neighborhood. The round shape of the three high-rises identifies them as a family, while their inner orthogonal structure makes them relatives of the mid-rise buildings that form the block. They distinguish the skyline of the city in a topographically significant location where the Birstal meets the Rheintal. The area has long been subject to increasing urban density because it is delimited by the railroad tracks.

Two green spaces are juxtaposed with the density of the architecture: one at the end of Güterstrasse, which is almost a typical city garden, and the other elevated, situated on the roof of the Migros building, which is an innovative green typology in Basel, thematically related to nature and health. The Nordspitze is an open neighborhood with built areas and green spaces in equal measure. If the roof garden is factored in as well, seventy percent of the total area consists of open spaces accessible to the public. The wide range of built and green typologies allows for a diversity of uses and activities: residential and office space, commercial and educational uses, sports and recreational facilities, and public institutions.

The transformation of the Nordspitze can be implemented in clear-cut, flexible stages, offering opportunities for investors, both large and small. The development of the area is crucially influenced by the conviction that value creation and socially oriented uses can be mutually enriching. Migros, as pioneer and prime mover of the Nordspitze, will continue operations throughout the transformation process and will contribute substantially to the design and character of the new urban neighborhood. 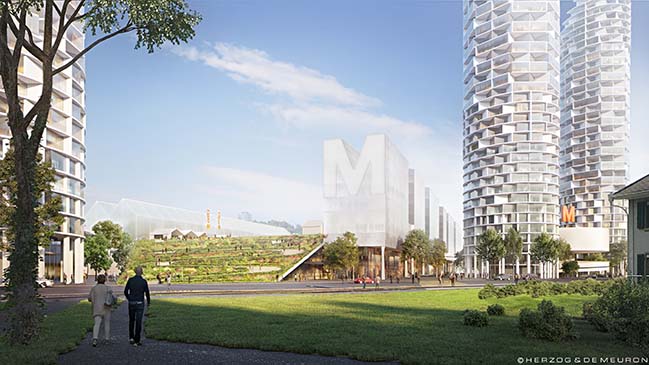 The historical Wolfgottesacker, a quiet and peaceful cemetery, has long been separated from the city, hidden away between railroad tracks and streets. In accordance with the urban proposal, it will now be incorporated into the new neighborhood and complemented by additional green spaces.

The Christoph Merian Anlage, practically a traditional city garden, is framed by mid- and high-rise buildings accommodating mixed uses: apartments, offices, social functions, stores, restaurants, and the like.With a spacious lawn and trees, the garden can be used for a variety of purposes and is open to the residents of Gundeldingen and the Dreispitz. The garden supplements the somewhat sparse supply of “perfectly ordinary” open spaces hitherto accessible to the relatively dense population.

The Gottlieb Duttweiler Feld on the roof of the Migros building constitutes a new, unique place for Basel; it is surrounded by the roofs of the city and flanked by the sloping topography of Bruderholz. Thus, a second open space, larger than a soccer field and generously linked to the surrounding streets and squares, will become accessible to the neighborhood and city residents.

The government of Basel-Stadt has officially declared the urgency of increasing density to create more room for workplaces and housing, and also explicitly of increasing the number of green spaces in the city: attractive green spaces to welcome residents, improve the quality of the air, collect rainwater, and foster plant diversity in a growing city. This includes plants for food production, which can be cultivated locally on the roof of the Migros building. Urban residents are becoming increasingly aware of the importance of healthy nutrition, fresh goods, and cutting down the distance between production and consumer. Small shed-like buildings, flanking the field and underscoring the rural character, provide room from events organized by Migros or other activities in connection with health in general and the natural environment, especially sports and education. These two large parks carry forward the spirit of social responsibility championed by Christoph Merian and Gottlieb Duttweiler since the early 20th century.

Migros already opened their first general store on the site in 1930; it was to become one of the most important and profitable points of sale in the region. It is now to be transformed from a shopping center on the outskirts of the city into a central urban anchor in the heart of the neighborhood. Migros will be consolidated into one single building, integrating OBI and an aboveground parking garage. Shops, cafés and restaurants, once inward-looking will be lined up along an urban arcade as an extension of Güterstrasse. Migros and the mall will open up to the city and to the Christoph Merian Anlage, becoming a distinguishing and animating feature of the new urban neighborhood. 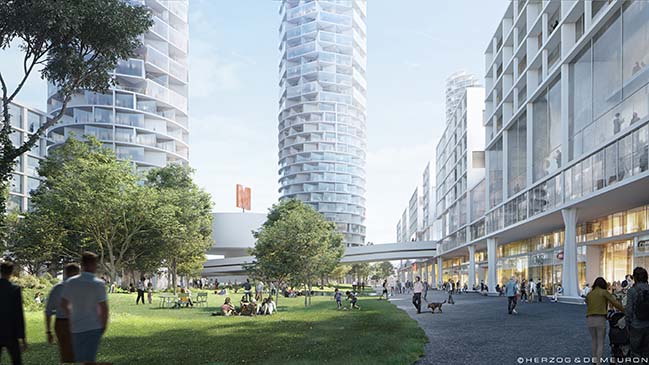 An access ramp takes customers from Münchensteinerstrasse directly into the new, aboveground Migros parking garage which is connected to the mall, Migros, OBI, the Garden Center, and Gottlieb Duttweiler Feld. A single, round space hovers above the ramp. Because of its location between two high-rise buildings and its iconic shape, it is crucial in defining the identity of this new place in the city.

It could be used by Migros itself for public events, concerts, readings, and exhibitions, as well as being rented out to associations or the creative and entertainment industries. It will be the first building on Münchensteinerstrasse.

Customer needs and mobility are undergoing radical change. The 500 parking spaces required today might be reduced in the future. In that case, the aboveground parking garage would be much easier to repurpose than an expensive underground garage.

New forms of living in the buildings above the arcade will meet the needs of increased urban density. A holistic, diversified mix of uses will be offered to all social strata not only by Migros; they will also be initiated and developed by third parties, ultimately creating a true Migros neighborhood.

The urban proposal pays precise attention to street extensions and the placement of intersections and squares to meet the needs of pedestrians. Some of the features typical of the Gundeldingen neighborhood will be adopted. The lively patchwork structure of Güterstrasse will be extended, ending in a high-rise building and continuing around it into the short alley that leads to theWolfgottesacker. 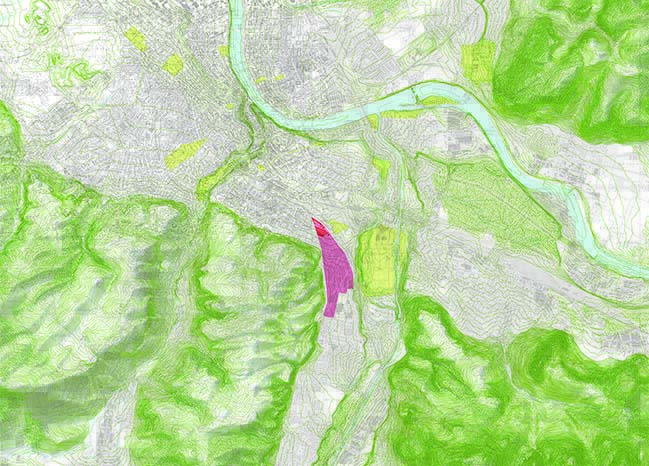 The edges of the Nordspitze are of special significance and relate to many of the squares in Gundeldingen. Distinctive buildings frame these new squares, respond to their surroundings and activate public spaces: for example, the community center at Güterplatz, the new entrance to the mall at Dornacherplatz, the permeable base of the tallest high-rise, and the gate building above the railway tracks opposite the Bernoulli tram depot.

New, contemporary typologies for the buildings will be based on the scale and character of the Dreispitz rather than the architecture of Gundeldingen. Single buildings with relatively small gaps between them frame both the edge of the street and the Christoph Merian Anlage. They form an open perimeter block with a public park in the middle that is accessible from all sides.

Two building typologies are to be distinguished. On one hand the mid-rise buildings: they are up to 30 meter tall, largely residential and suitable for collective housing . Along the Christoph Merian Anlage, buildings are placed atop an arcade that communicates with the park and creates attractive spaces for shops, while on Münchensteinerstrasse, the buildings stand on the ground. On the other hand, there are the three high-rise buildings, grouped together giving the Nordspitze and the entire Dreispitz an unmistakable identity that will become a salient feature of the Basel skyline. They are placed on columns so that their ground floors communicate with the urban fabric around them. They will be of mixed-use to give life to the buildings: various residential opportunities, service industries and offices, social and public facilities can all be housed in the towers. These stacked uses will be expressed in the architecture and will lend the three buildings their distinctive identity from close up as well.

The size and height of the buildings and their uses will take definitive shape in accordance with both the planning schedule and available slices of investment capital, but the location of the three high-rises and the way they relate to the city are fixed. They function like anchors and points of orientation and form a kind of gate to the new urban neighborhood. Strict architectural regulations will ensure unity within diversity among the different buildings, relating them to each other while avoiding monotony. 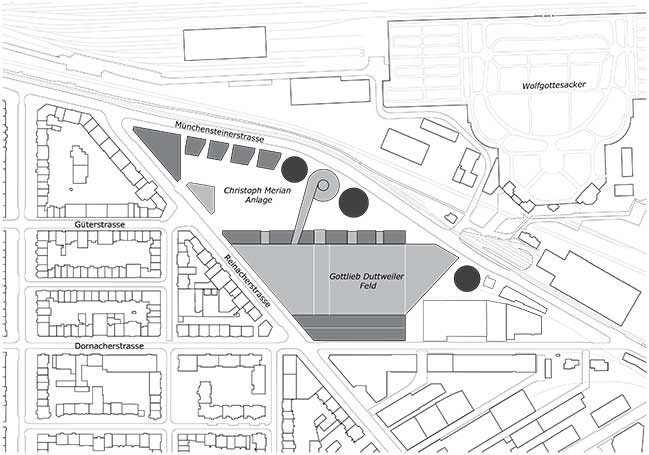 Recommended post: The Barclay Apartment in New York by Handwerk Art and Design