Gothenburg's new cable car system will comprise one cable car line with four stations and six towers. It is one of a number of projects undertaken by the City of Gothenburg to mark its 400th anniversary in 2021. The cable car system, which will provide fast and efficient aerial transport across the city, will be the first new mode of public transportation in Sweden since the subway was introduced in Stockholm in the 1930s. 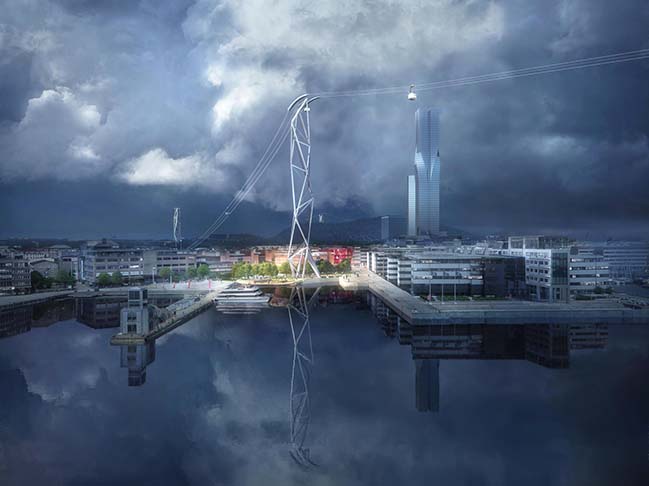 Project description: For the people and the City of Gothenburg the cable car will provide an alternative form of public transport by way of aerial shortcuts across the RiverCity. Travel times will be significantly reduced with minimum environmental impact, while an efficient and direct connection will be established between areas north of the river and the old city to the south.

The 3km long Gothenburg cable car line starts at Järntorget in the historic city on the south bank of the river, where it links to a bus and tram transfer node. It then crosses the river and continues to three further stations in the north of the city. 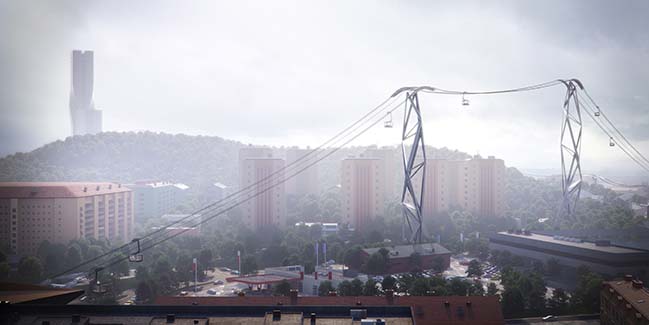 Towers:
The Towers are inspired (and reference) the steady motion of Gothenburg’s famous shipyard cranes. The six towers will continue across the landscape as sculptures, defining a new city skyline that symbolically connects the history of the RiverCity with its future. Their light and open structure avoids casting heavy shadows, while facilitating urban paths, streets and green spaces to pass through the base of towers, avoiding the creation of dark, socially unsafe conditions. The designs of both the towers and the stations follow strong sustainable principles, incorporating passive measures, active technology and most importantly, social sustainability. The towers are made from prefabricated fibre reinforced spun concrete and have a low material use and minimal maintenance requirements. The short construction time will also greatly minimise environmental impact.

At night the illumination of the towers is achieved by spotlights that line the inside of the tower beam surface, creating urban beacons. Light cutting through a gap between structural components creates a thin, sharp line which subtly emphasises the silhouette at night. The highest tower at the Lindholmen quay could also become a city balcony located on the water: a new urban focal point that makes the water accessible and provides a new destination for social gathering. 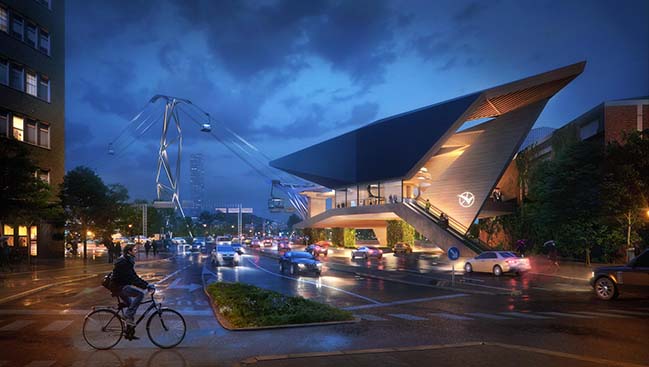 Stations:
The stations themselves are not only designed around principles of natural wayfinding and social safety, but also with a strong identity in mind that will make them clearly recognisable as destination points within the city. In their formal representation, with their faceted roofs, a family is formed with the tower structures to create a strong line-long, green link identity. In their basic geometry the stations are designed to be adaptive to different urban conditions. The geometric ceilings, along with the walls, both clad in wood, bring a warm glow to the stations and guide people up towards the platform level. Here the ‘floating’ roof structures enable unobstructed panoramic views to the surrounding city and the arrival and departure platform. Within the self-supporting roof structure, large skylights flood the platform with daylight, while all vertical transportation routes are carefully positioned to allow for the shortest routes and different speeds of travel. For the intermediate-stations, a conceptual hinging mechanism around the station’s ‘centre point’ enables their main geometry to ‘kink’ in different required directions.

Energy is generated by the stations themselves by way of PVT panels (Photovoltaic thermal hybrid solar collectors) which are integrated within the roof structures to provide both electrical energy for lighting and thermal energy to heat floors and stairs. Energy use is limited by the incorporation of large skylights that flood daylight into the stations and artificial lighting that uses low energy systems. Lighting fixtures are hidden behind the wood clad walls and ceilings and provide a gentle wash of light over the interior surfaces. The resulting glare-free, indirect light, produces optimal conditions for safety, visual comfort and efficiency. The large structural elements underneath the stations are intended to be clad with an innovative moss culture cladding which removes fine dust, nitrogen dioxide and ozone gases from the air and reduces the urban heat island effect by way of evaporation. Noise absorbing qualities also reduce traffic noise. Carefully designed surroundings for the stations, with public seating and leisure zones, will allow for social integration on a neighbourhood level. 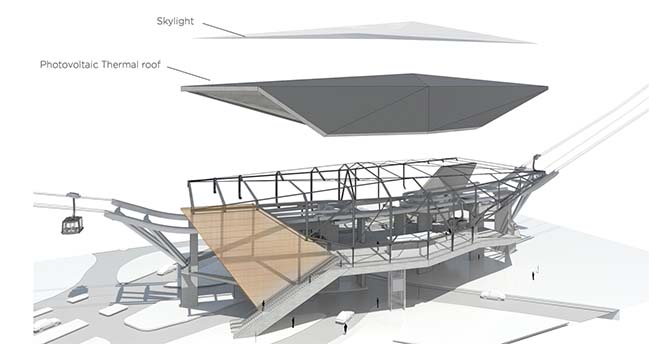 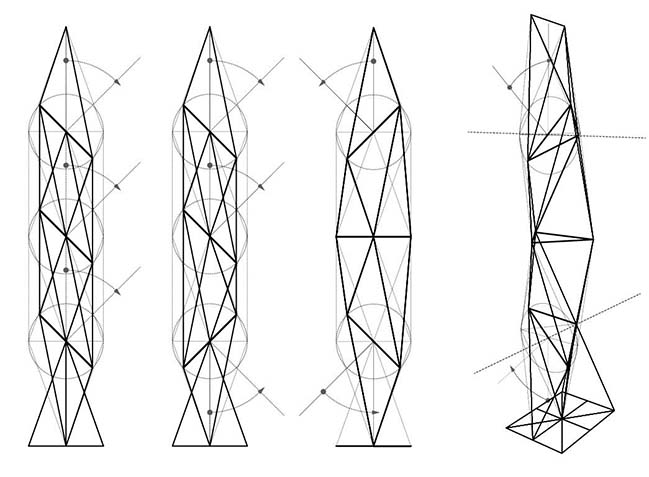 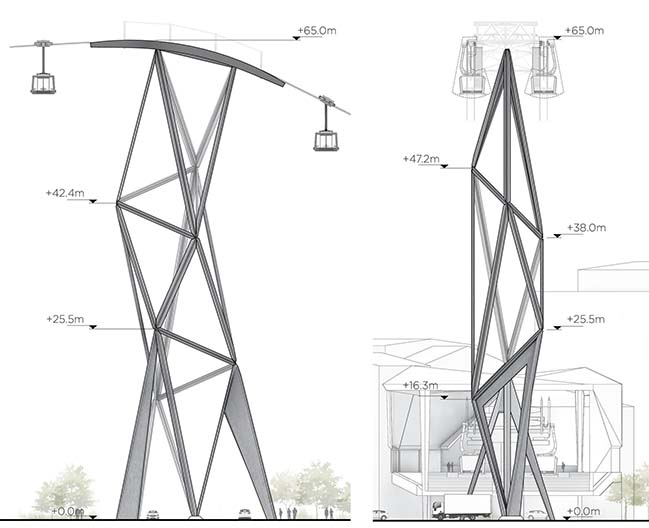 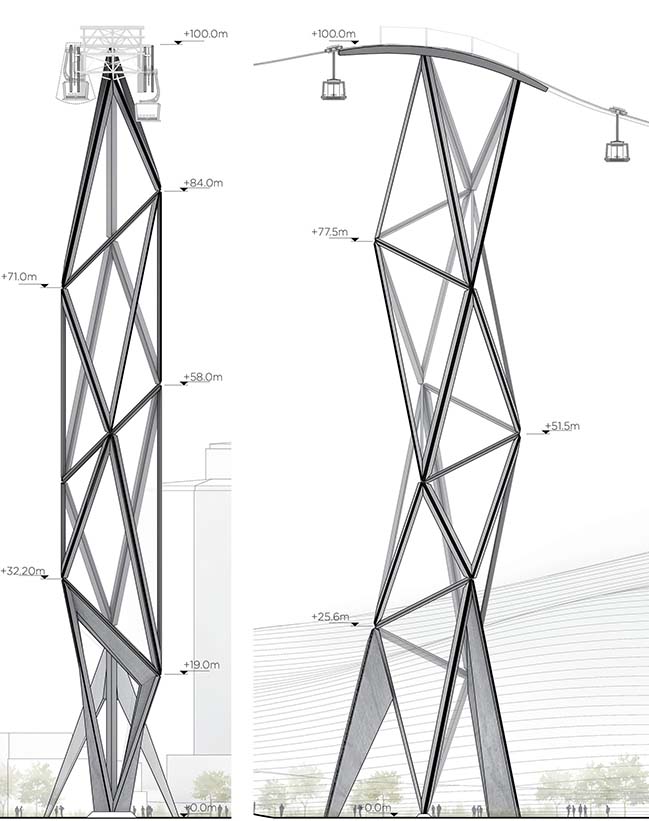 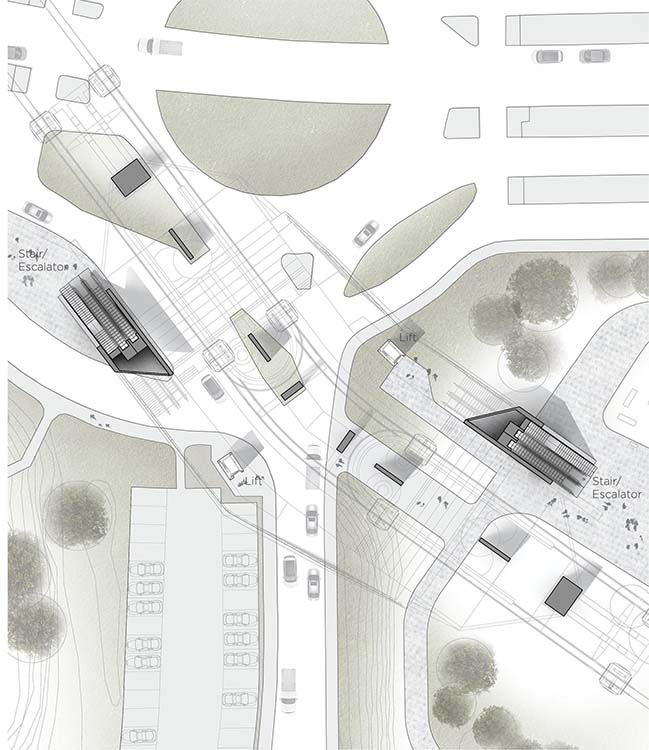 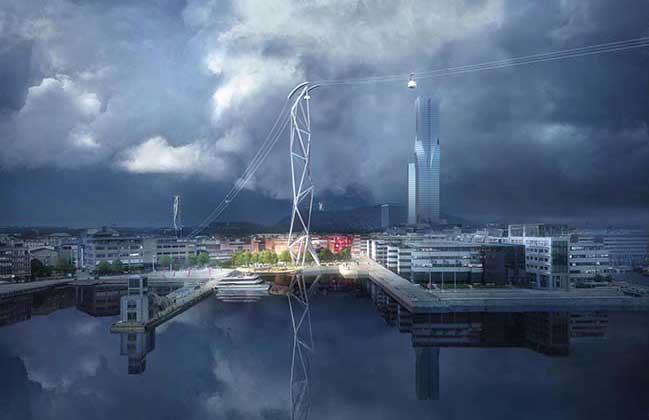