gmp won the international competition with a design that generates a spatially diverse urban landscape with buildings and a public park. With this concept, the Changzhou Culture Plaza has become a symbolic and unmistakable new public center of Changzhou. 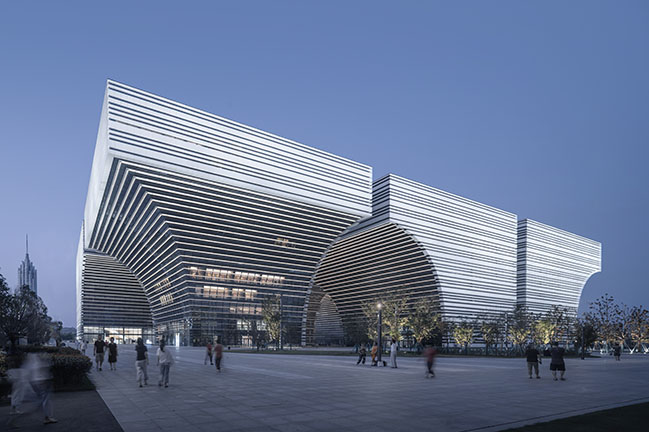 From the architect: In the Chinese province of Jiangsu, within the catchment area of Shanghai, lies the city of Changzhou which, with its about 5 million inhabitants, has developed into an important industrial metropolis in the Yangtze Delta region. In the newly created city center of Changzhou, the architects von Gerkan, Marg and Partners (gmp) have created a cultural center with an art museum, library, hotel, offices, and retail areas. gmp won the international competition with a design that generates a spatially diverse urban landscape with buildings and a public park. With this concept, the Changzhou Culture Plaza has become a symbolic and unmistakable new public center of Changzhou. 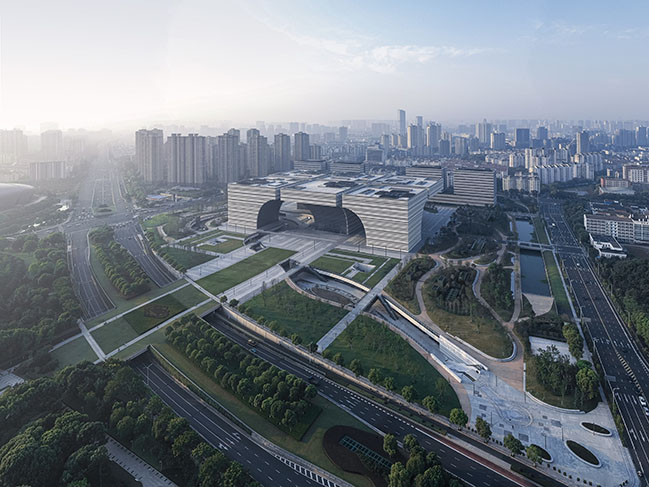 The Changzhou Culture Plaza is surrounded by a public park and, together with the Town Hall and the Changzhou Grand Theater located to the north, forms the new city center of Changzhou. The development comprises six identical, freestanding building modules that are angled towards each other and arranged in a 2 x 3 cluster. Each module is based on a footprint area of 70 x 70 meters and, as an autonomous unit with individual entrance and lobby, accommodates one of the functions of the Culture Plaza, such as the art museum, library, hotel, and offices. 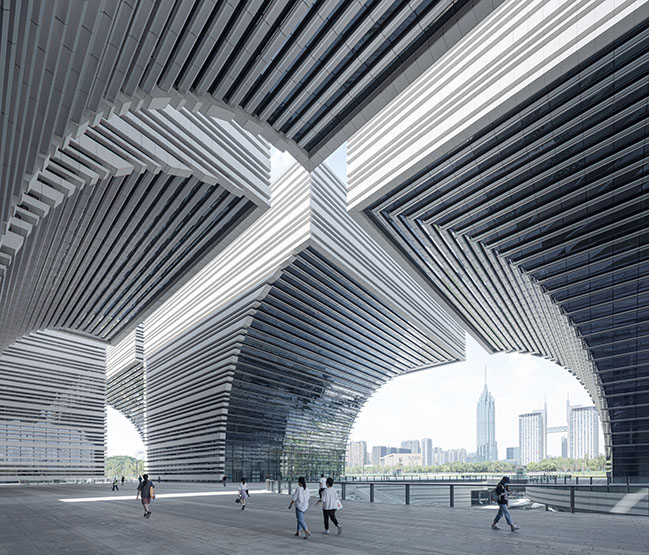 Visually, the 50-meter-high buildings appear as cubes that are hollowed-out on two sides. In this way, together they create a roofed-over public space that interlinks with the park, forming a spatially diverse city landscape. The watercourse that runs diagonally across the 17-hectare site flows in a canyon-like sculpted cutting, which links the commercial functions with each other at basement level. At the same time it emphasizes the bridge motif of the buildings and links the Plaza with the underground station to the south-east. The view from the north articulates the gesture of a large gate that, across Longcheng Avenue, faces Changzhou People’s Square with the Town Hall and Grand Theater. 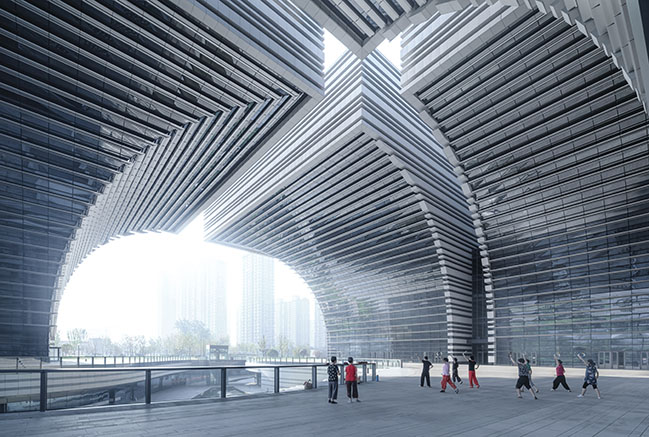 Following the basic idea of the concept, the facades have been designed according to the principle of unity with diversity. A natural stone facade dominates the orthogonal building envelope; the curved cut-out areas are given prominence by an elegant glazed facade, making the cut edges visible, and sculpturally emphasizing the abstract shape of the buildings. In this way, different characters are acquired by the building envelopes, which are spanned by a uniform horizontal facade structure with wide aluminum louvers that follow the curvature beneath the cantilever. At the same time, the horizontal natural stone or metal louvers serve as external solar screening that significantly increases the energy efficiency of the buildings. 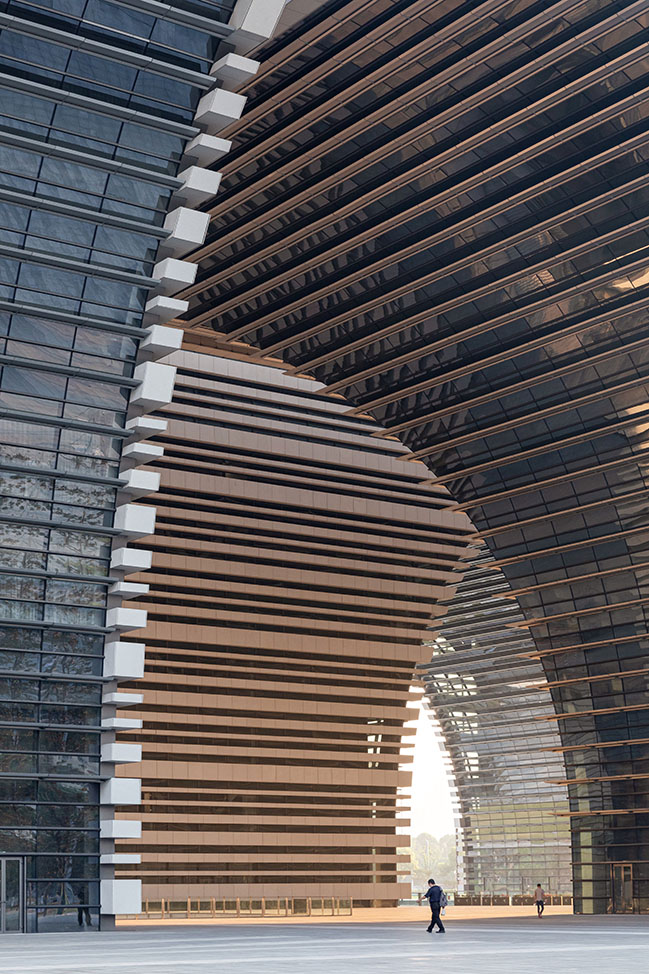 During the day, the solid stone bands form a strong, rhythmical contrast to the dark glazed areas. At night, when the buildings are internally illuminated, the arched glazed areas are invitingly lit and, beneath the almost 40-meter-high arches, create impressive interaction between the inside and outside with continually varying angles of view. 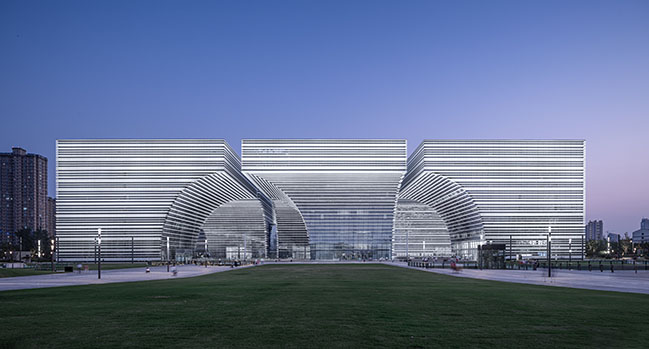 The loadbearing structure consists of reinforced concrete cores and a steel construction that diagonally cantilevers by almost 40 meters on two sides of the core area. The vertical load is transferred downwards via compression arches, and the horizontal forces are transferred to the reinforced concrete cores via the cantilever floors. On the upper floors of the modules there are large column-free exhibition spaces and Sky Gardens of almost 4,000 square meters. 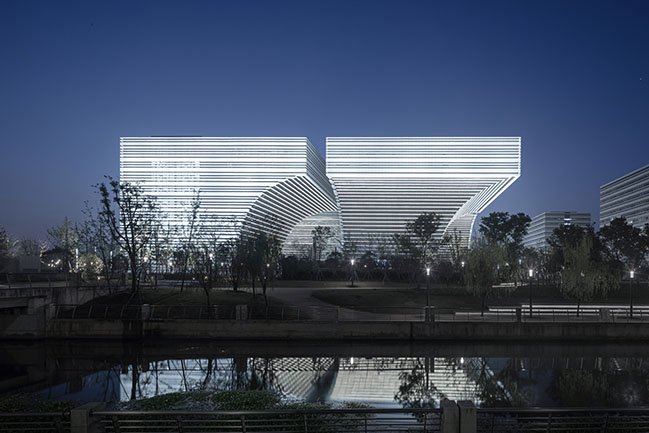 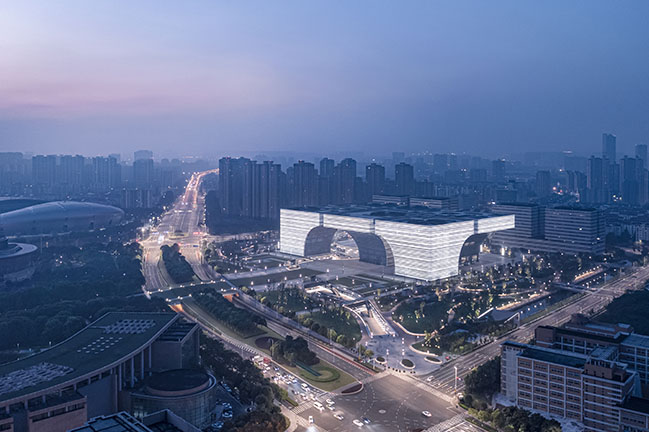 11 / 30 / 2020 gmp won the international competition with a design that generates a spatially diverse urban landscape with buildings and a public park. With this concept, the Changzhou Culture Plaza