FORAM is an architectural concept designed by the architecture firms BART//BRATKE that the project aims at mixing people around the notion of water respect, sharing in movement and dynamic balance. 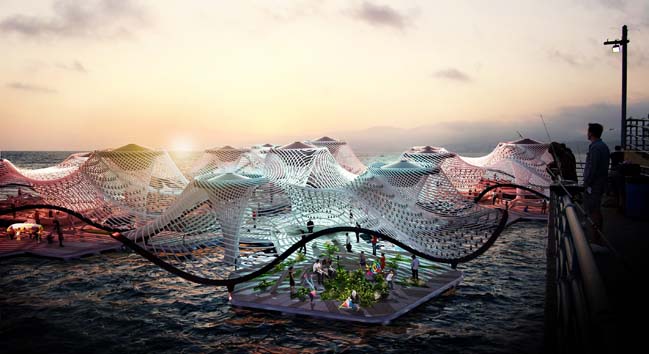 Project's description: California has been experiencing serious drought and water scarcity over the last years. The state is entering the fourth year of a record-breaking drought creating an extremely parched landscape. Governor Jerry Brown declared a drought State of Emergency in January 2015 and imposed strict conservation measures statewide. According to an aerial survey conducted by the U.S. Forest Service in April, about 12 million trees have died in California forestlands in the past year because of extreme drought. The dead trees add to the flammability of a drying landscape that is increasingly threatened by large, intense wildfires. California’s cities and towns would be required to cut their water usage by up to 35 percent or face steep fines under proposed new rules, the state’s first-ever mandatory cutbacks in urban water use as the state enters its fourth year of severe drought.

In this context, FORAM is a prototype that aims at meeting the need of the mutualisation of the knowledge in terms of sustainable management of the water resource and at the same time creating awareness by creating a usable piece of art in front of Santa Monica’s coastline. The nomadic, hydrodynamic vessels become a showcase and interconnected learning platform for water purification processes and raise awareness for free access to drinking water worldwide. FORAM is an innovative scientific experiment dedicated to set investigation fields as much innovative too. It is a “clean” vessel, of a new generation, a floating purification station, a tool of ecologic promotion, dedicated to sensitize the populations. 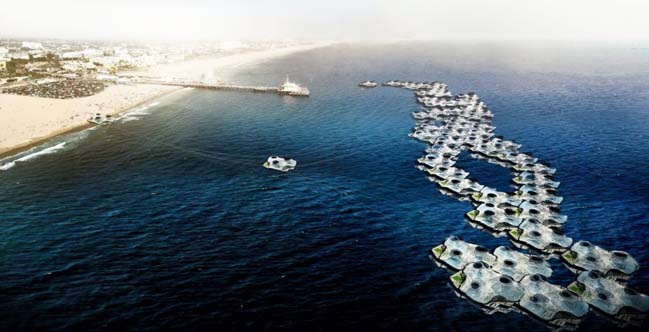 FORAM borrows its name from the amoebae foraminifera, a marine organism that can be found in brackish, freshwater and even terrestrial habitats, producing snail shaped shells that grow with the organism.
The project aims at mixing people around the notion of water respect, sharing in movement and dynamic balance.

FORAM is a self-sufficient, modular swimming raft-pavilion, equipped with water purification technologies and a solar pond as a clean energy generator to foster coast farming and build an artificial reef of clean water plants in front of Santa Monica bay, therefore explaining modern and ecological purification processes and natural energy generation in one art experience. The organism is designed to have carbon-zero emissions, purifying drinking water and collection energy via the principle of the solar pond. The raft consists of two major parts: On one hand the floating raft itself. Its scenography animates the debate on the water future into four thematic areas that provide spaces for urban farming, dedicated learning area, an eatery with self-grown food and a water bar at the gravity center where floating platform and performative roof canopy meet each other. On the other hand, the roof structure consists of 3 elevated tanks, at the top of the canopy, that purify water via direct desalination that gets distributed via a network of transparent tubes and collected at the bottom of the raft. 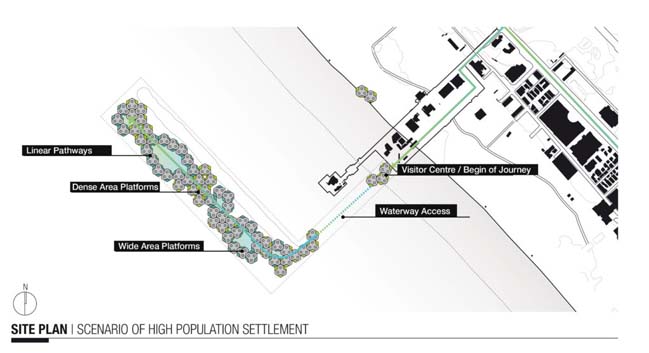 FORAM collects the desalinated water at the three lowest points of its construction with the conduit systems. Pumps which are powered by clean energy gained in the solar ponds pump the water into the conduit system and from there into the desalination tanks. The desalinated clean water is pumped into storage tanks which are mounted on the underside of the rafts. The fresh clean water can either be enjoyed first hand at the fresh water bar, stored into the Santa Monica water network, used on one of the platform’s arms for off shore farming or get vaporized to cool down the surrounding and create an own atmosphere inside the structure. FORAM provides a new relaxation and chill out spot in front off the coast of Santa Monica. The pavilion metamorphoses into a fog cloud with evanescent contour of its own inside using sound, smell and media projection to attract its users at nighttime, providing a platform for resident artists and a spectacular and fun off-shore entertainment program. FORAM’s water core becomes the fireplace of the 21st century, providing an interesting space, where people gather, meet and interact with each other. It is a poetic invitation to a sensory experience for transdisciplinary research, geopolitical debates, popular pedagogy and therefore for the emergence of an ecologic avant-garde on the water theme.

In the center of the project is the human itself, balancing between his actions and the respect of the environment. 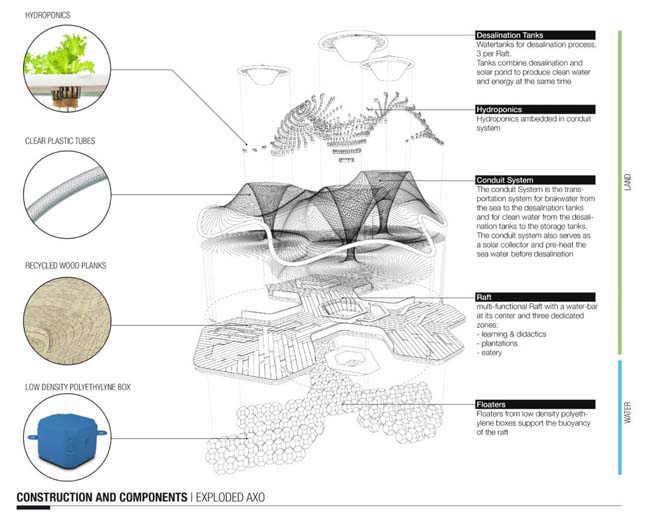 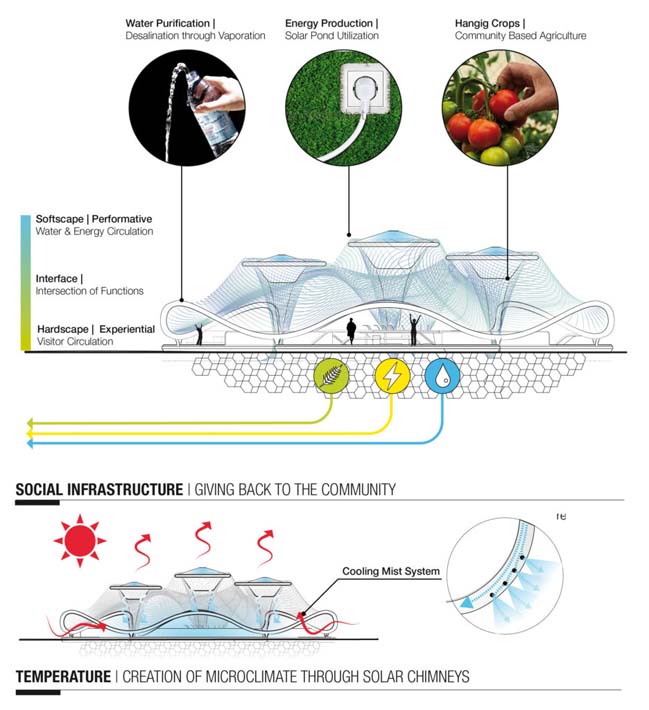 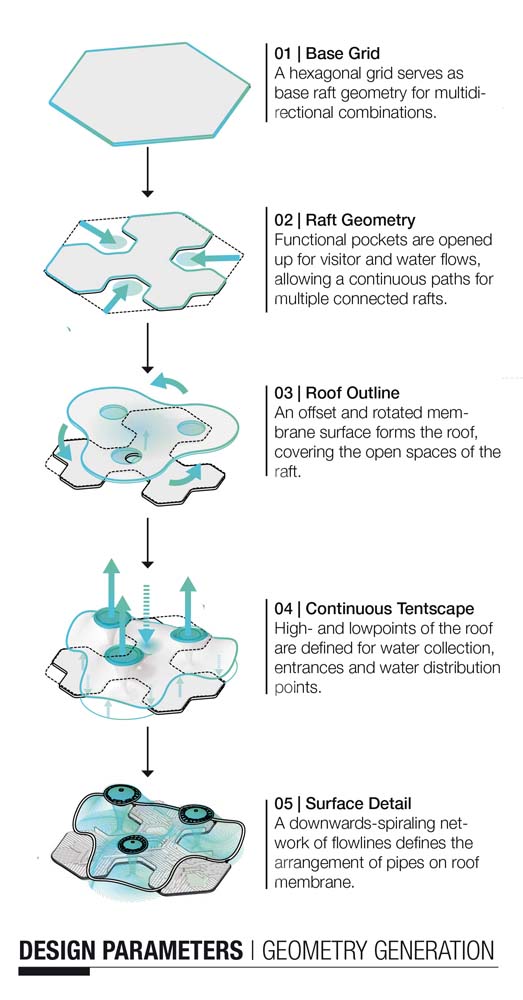 > PASSAGE: the idea of borders between Europe and Africa
> Viking Age Museum by GRAFT
> Architectural concept of new FC Barcelona

08 / 16 / 2016 FORAM is an architectural concept designed by the architecture firms BART//BRATKE that the project aims at mixing people around the notion of water respect...