First, I created an art installation on the occasion of the exhibition "Concept of Happiness: Anish Kapoor’s Outline of Collapse" at the EYE OF GYRE gallery in GYRE, a building designed by MVRDV in Tokyo. The installation, HUMAN NATURE: Homage to Anish Kapoor, was suspended through the void space connecting all floors of the building. 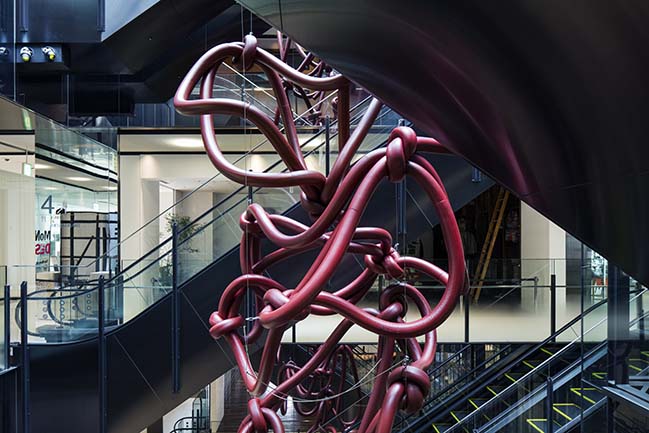 Anish Kapoor has exhibited his work in numerous public spaces and art museums all over the world, but this is the first opportunity to present his work in an art space directly connected to a street.

Kapoor expressed a keen interest in this art space directly connected to fashion, people’ s daily activities and the streets of Omotesando and Harajuku, and hoped that the spirit of his art would not only stay in the exhibition space but circulate around the entire building.

Curator Takayo Iida, in response to the artist's suggestion, requested me to create an art installation which would serve as a mediator connecting all floors in the building and instigate a dialogue between the spirit of Kapoor's work and the entire architectural space of GYRE.

After the exhibition, this installation relocated to an art gallery converted from a former clinic by Schemata Architects. It was recomposed according to the spatial configuration and transformed into an installation entitled Musubi to intensify expression of the concept of the artwork. 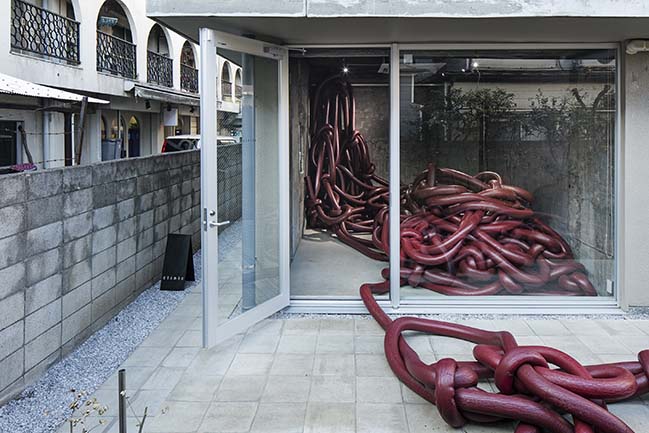 Anish Kapoor is said to be an artist of dichotomy, and his works convey the concept of dichotomic existence such as happiness and sorrow, life and death, beauty and ugliness, and good and bad, that reflects life and religions in India. In addition to the aspect of dichotomy, I felt a sense of masculinity in Kapoor's work, perhaps because of the massive impact of the large object erect against gravity. Since I also found that his philosophy has some affinity with the Eastern philosophy of Yin-Yang, I conceived an idea to create an installation that would counter the strong existence of his work with reference to the concept of Yin-Yang. Just like the way Kapoor's work is closely related to life and religions in India, my idea is to express dichotomies reflected in life and religions in Japan, with a focus on reality that I face as a woman. 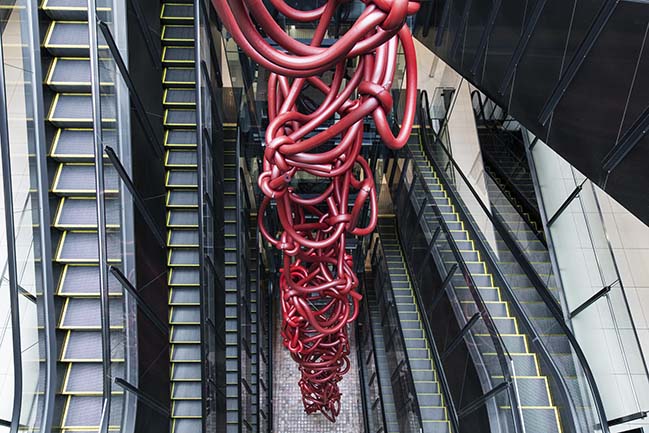 In Early Jomon period in Japan, people started making clay figurines of women, which indicates the beginning of the Mother Goddess worship. However, in the Middle Jomon period, people started breaking the clay figurines they made. According to a theory, an act of cultivation of crops that started around this period did harm to the earth or the bodies of Mother Goddess, and people wished to grow crops out of the bodies by breaking them. In my view, the clay figurine, which accepted the act of breaking and natural course of all existence, is associated with the woman's womb signifying the receptive nature of the female gender. The act of receiving is associated with the way of nature, like how water keeps transforming and existing in ever-changing environments. On the contrary, the act of not receiving may attribute to the way of humans who counter the way of nature although they are part of nature. A womb can conceive a life, regardless of whether a woman wishes or not. On the contrary, humans think and make decisions between good and bad, or whether to keep or kill a life. A mother feels the dichotomic existence of life and death with an overwhelming sense of reality, because she experiences coexistence of life and death of herself as well as those of another person within her body. I wonder how many women had to suffer from having to choose between life and death of the unborn under difficult circumstances despite experiencing wonderful natural phenomena occurring in her body, ever since humans evolved into Homo sapiens, started thinking and developing myths. 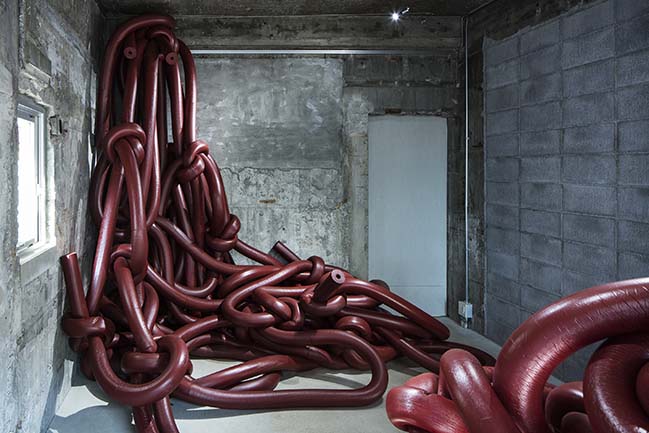 The commonly used Japanese word for "bear/give birth to", umu can alternate with a word musubu according to a traditional definition, which is a word commonly used for " tie together ". Originally, the word musubi (tying / a knot) comes from a word musu (to grow / to develop) combined with a word hi (mythical power), and the act of tying together signifies people's wishes for succession and prosperity of life. For example, the Japanese use mizuhiki, paper cords used to make decorative knots and patterns, for a congratulatory gift or tie an envelope containing congratulatory money in such a way to make a special knot pattern. Since ancient times, people pray to Musuhi gods for succession of life in Japan. Generations of musu-ko (born boy = son) and musu-me (born girl = daughter) were born from the body of the Mother Goddess (earth), and as a consequence, we all came into existence today. The circle of human life in this world –– multiple repetitions of lives being tied together and separated, being born and dying –– is exactly like the way how the womb has accepted everything beyond what is good or bad. At the same time, there are also numerous women who made difficult decisions not to join this circle under various circumstances.

Kapoor has said "For me, the work is neither abstract nor non-abstract: it sits between meaning and no meaning. So apparently, it's just a form." He simply shows us that reality –– good and bad, nature and anti-nature, life and death –– just exist as it is. It is absolutely true, but I feel this is somewhat similar to the act of breaking clay figurines. What I created as an homage to Kapoor is meant to be broken clay figurines –– or my silent determination to accept dichotomies of all existence, humbly presented to the artist with my prayers. The will and voice of my body told myself to behave like a womb without questioning good or bad, while constantly transforming like water –– and our efforts resulted in this ever-transforming installation created through the continuous act of tying.

[Relationship between the installation and architecture]

Relationship with the building designed by MVRDV:

In order to express the dichotomy of inside and outside, I chose urethane foam tubes used for duct insulation in buildings, and exposed the normally concealed material out in the open. The red-painted urethane foam somewhat reminds one of internal organs of a human, while evoking an impression of external surface like human skin at the same time. The material also had an appropriate degree of softness and flexibility to create complex and gentle curves, making a clear contrast with linearity and hardness of MVRDV's architecture. 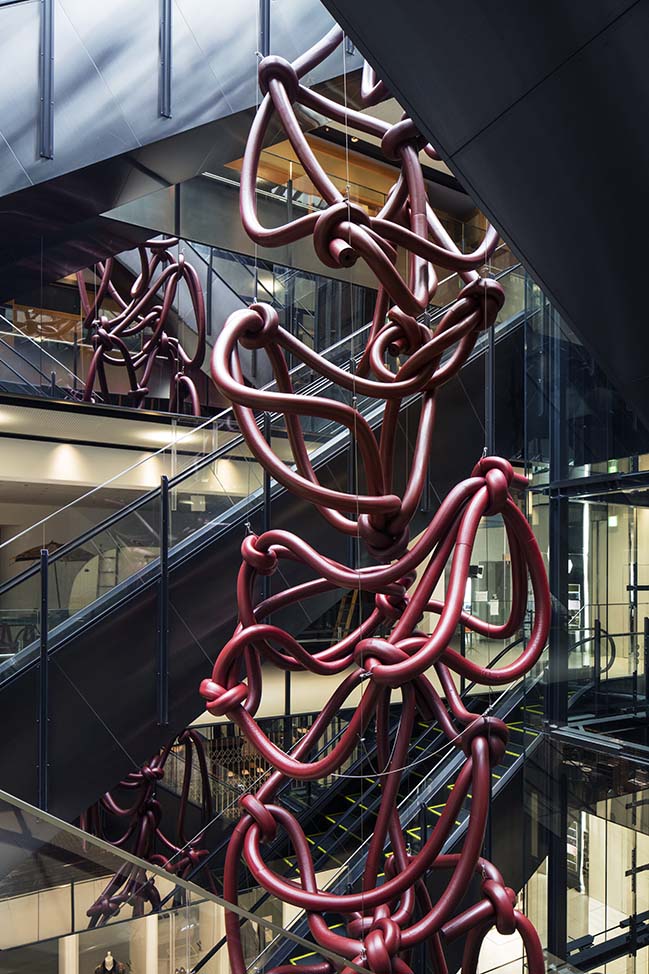 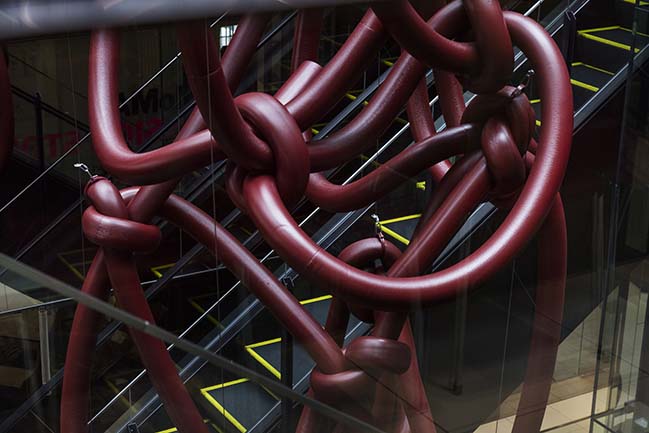 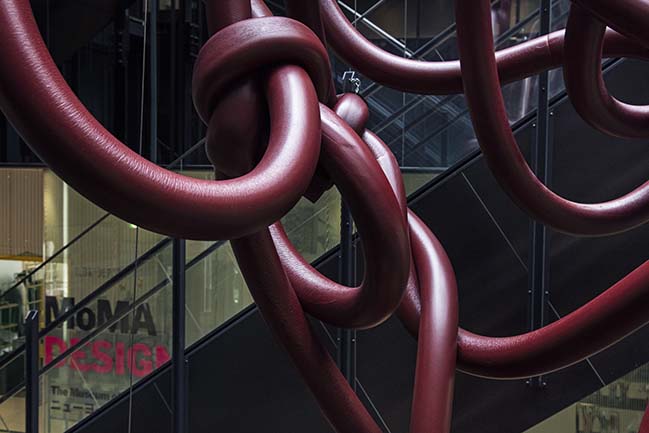 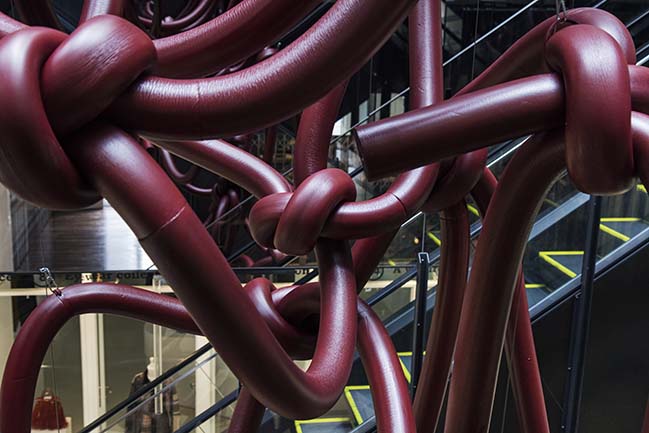 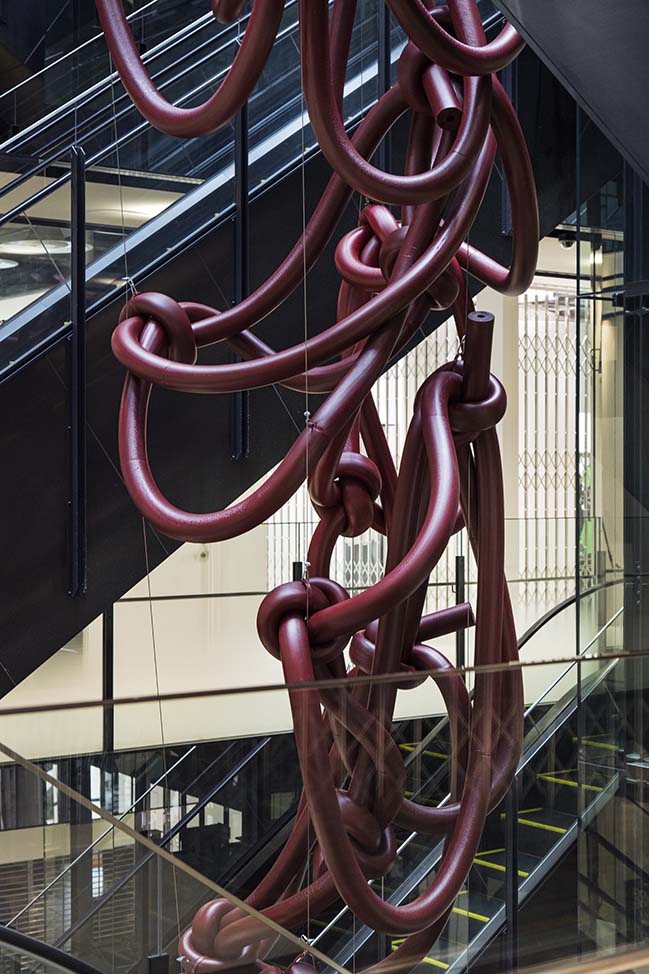 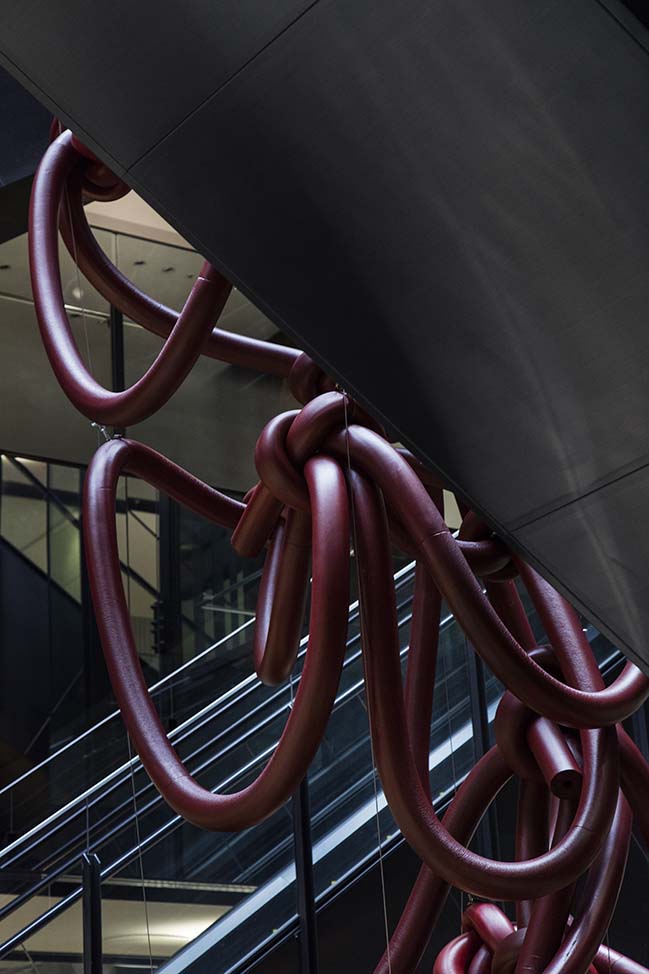 Relationship with the art gallery converted from a former clinic by Schemata Architects:

In this new location, the installation is reconfigured according to the space configuration of the former clinic site. The long winding work transverses the interior and exterior and making a clear contrast between the two spaces, while creating a concave – convex relationship in the gallery space by letting some parts resist gravity and other parts follow gravity. The installation extends into the garden which is visible from the Blue Bottle Coffee Sangenjaya Cafe (also designed by Schemata Architects) next to the gallery, inviting customers to see the object as it is without any knowledge of the background of this place or installation. 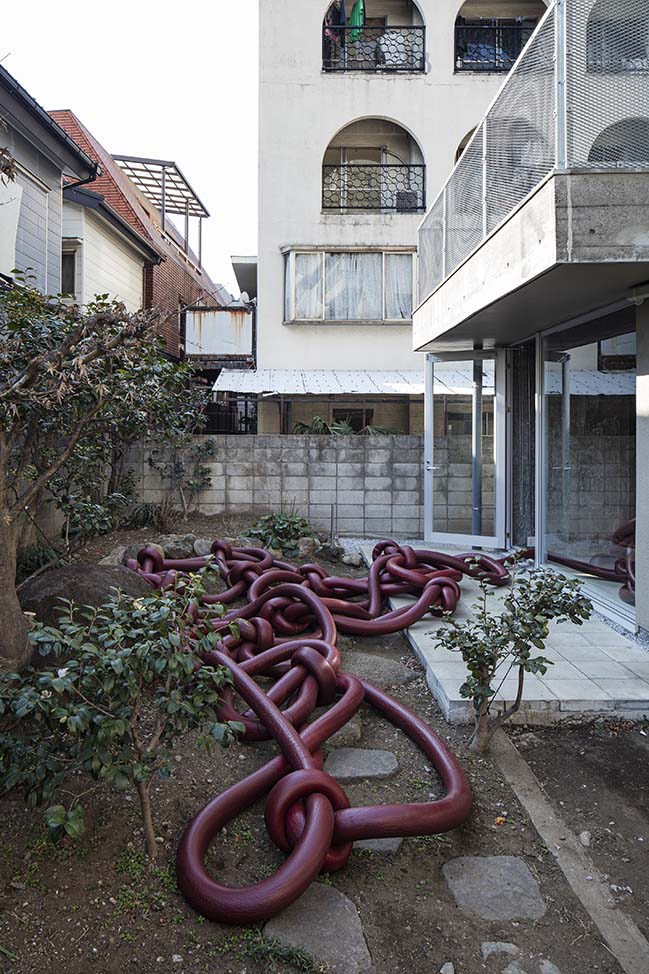 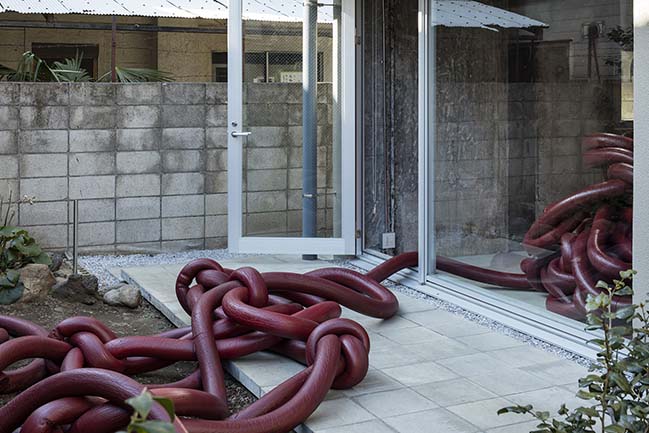 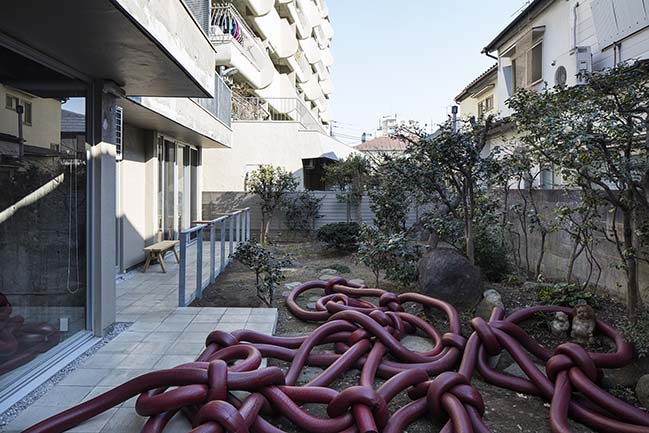 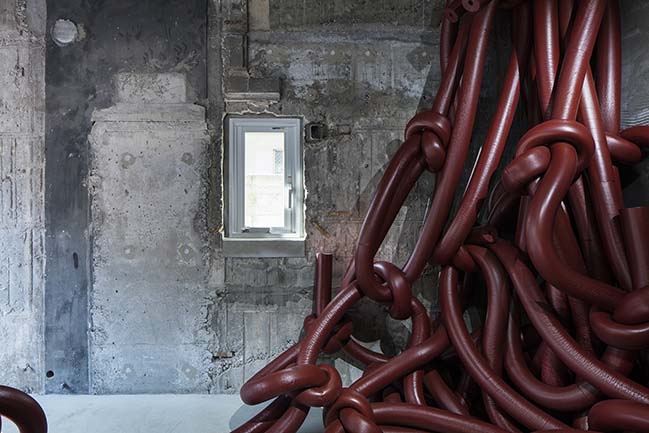 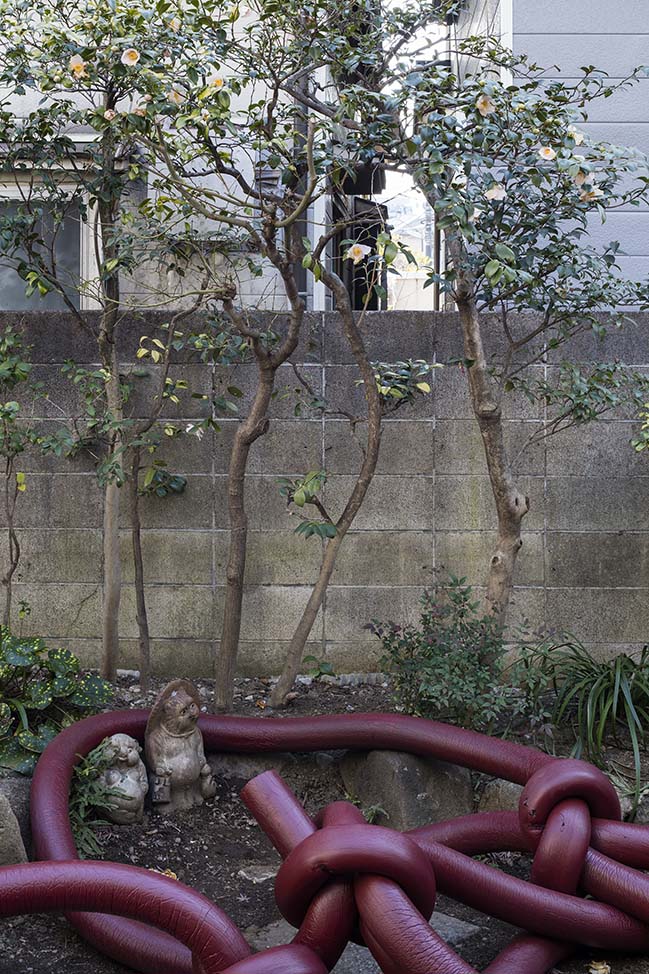 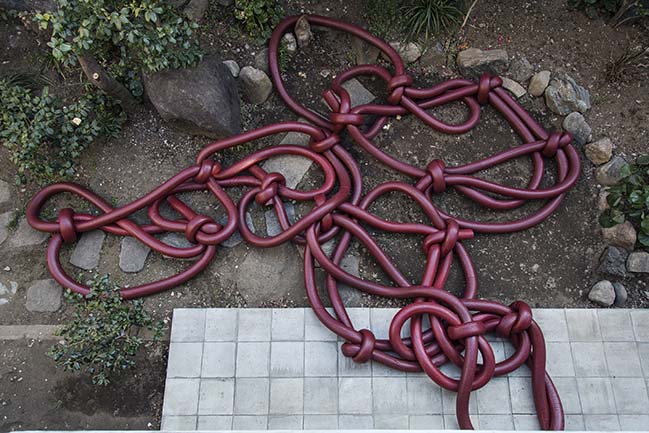 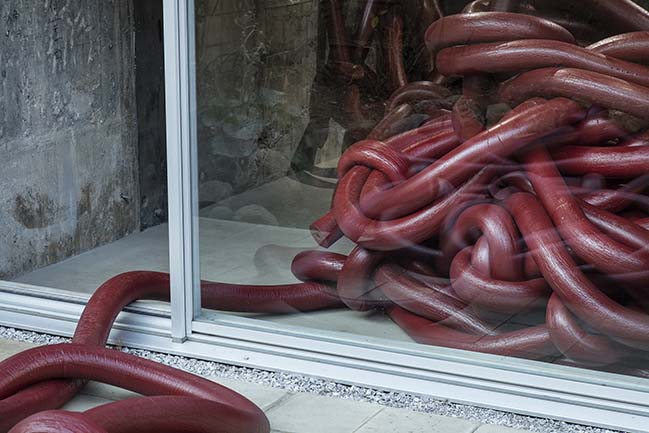 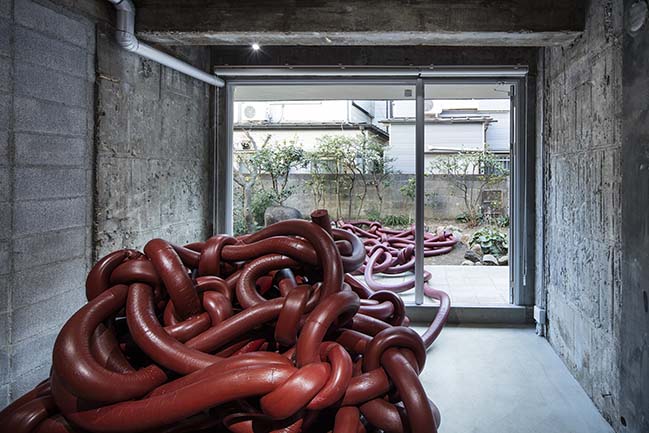 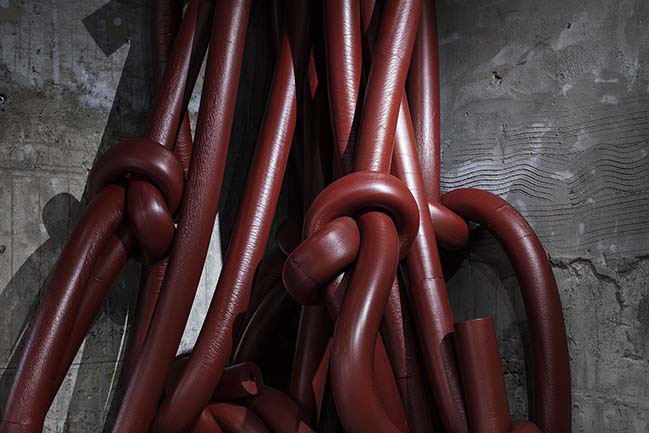 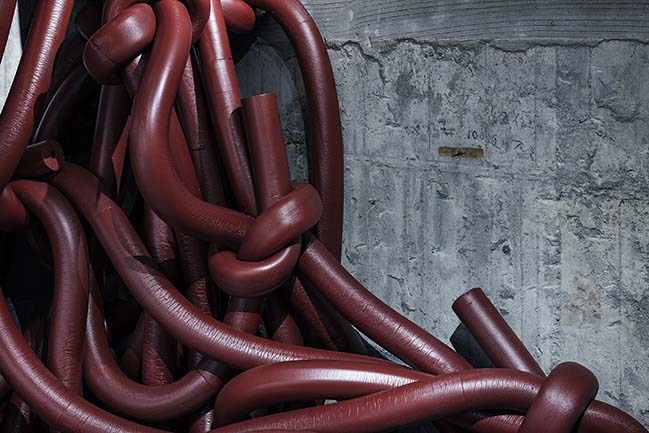 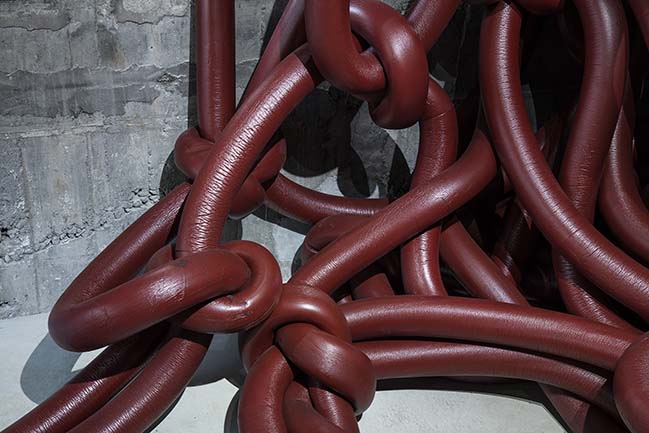 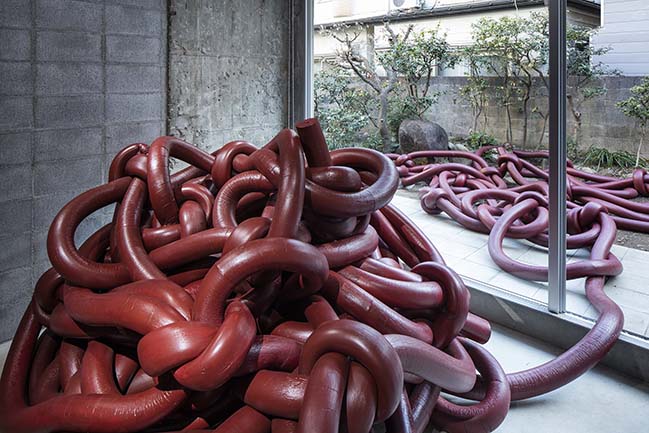 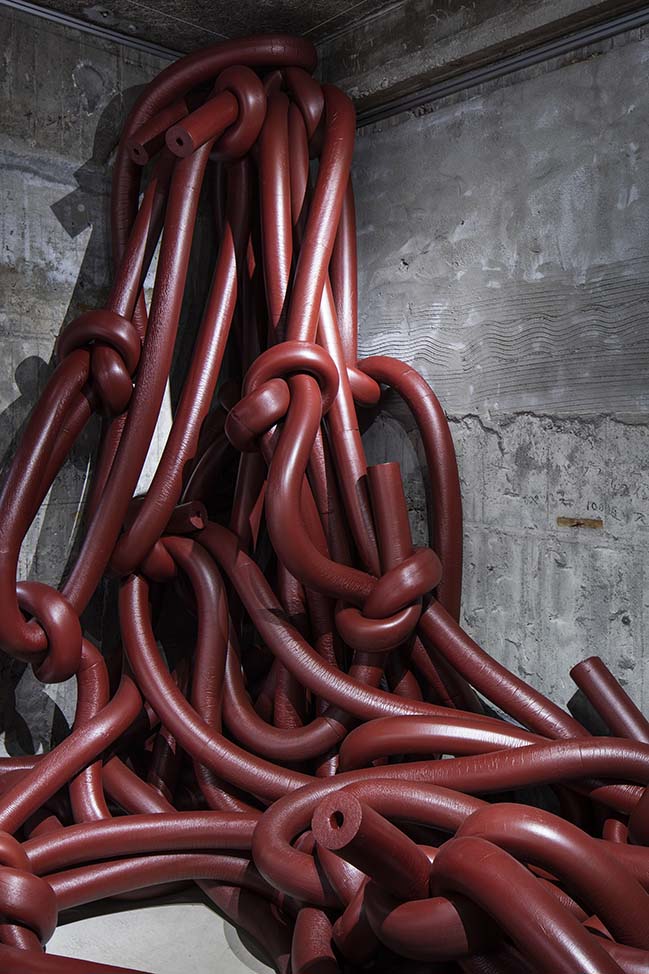 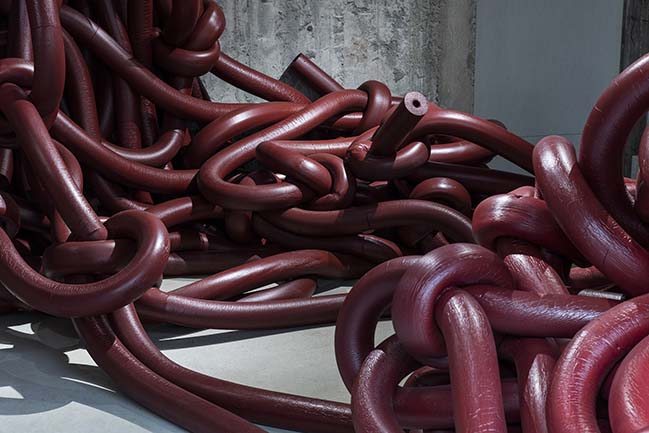 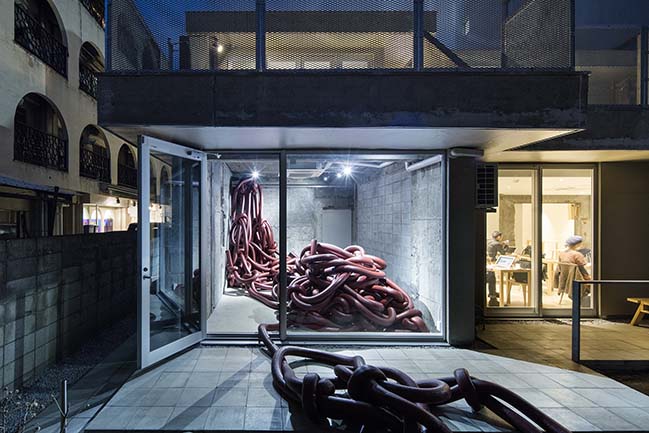 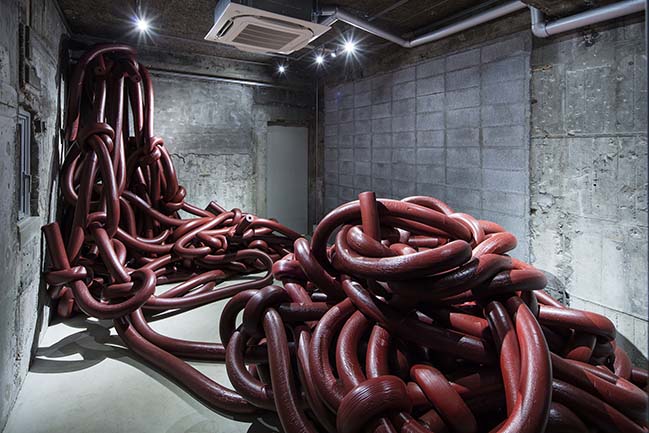 02 / 27 / 2018 The installation, HUMAN NATURE: Homage to Anish Kapoor, was suspended through the void space connecting all floors of the building