Maison Du Projet is the first C2C (Cradle to Cradle) building in France. A regenerator of a former factory, it is an economic, cultural and environmental activator. 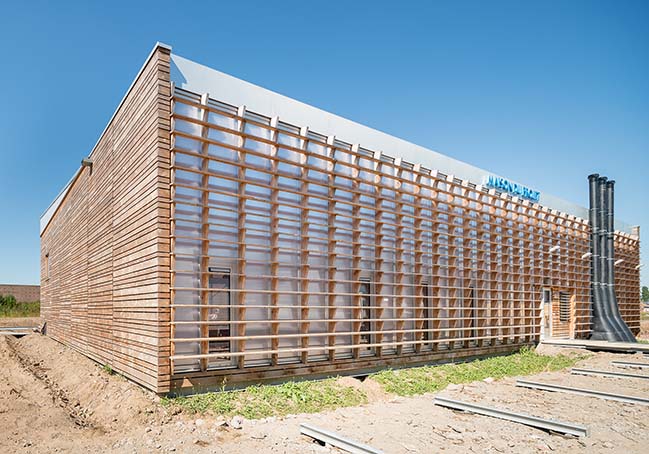 From the architect: The MdP (House of the Project) hosts meetings, exhibitions, calls for tender, as needed to reactivate the 1.000 Ha area into the circular economy. It is also improving soil and air conditions, eating up the chemicals left over from former industrial activity. 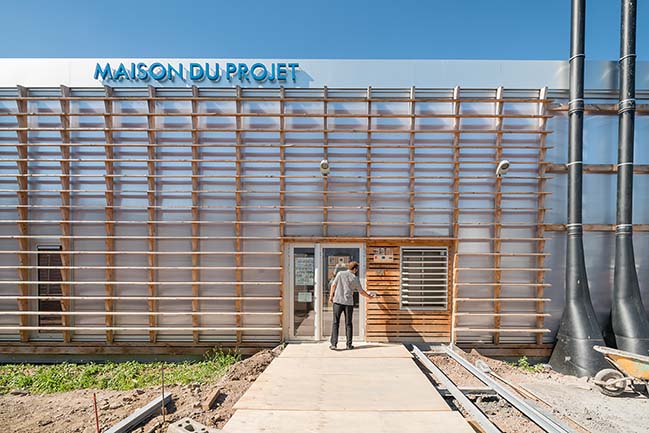 There were no earthworks, using driven piles that may be recovered; the structure and façades are designed for disassembly and reuse; materials are biodegradable or recyclable, with zero harmful chemicals; sanitation generates nutrients, with the chimneys of three dry toilets as a main feature of the façade; landscaping cleans the soil; the building feeds on clean energies, with controlled solar exposure and the principle of the thermal onion; technology reuse is easy, the designers call it “superfurniture”: mobile equipment units to provide a specific function to any space.

After the closure of the factory complexes of Roubaix, the city of Lille decides to implement an urban regeneration plan for an area of ​​approximately 1000 ha that is plan to be completed in 10 years.

C2C: Cradle to Cradle - Circular Economy
The MdP is the first C2Ci building (Cradle to Cradle inspired) built in France. Temporality was a fundamental factor in the gestation of the project. The short execution time period given required the use of prefabricated elements in factory in order to allow a quick assembly on site. According to the philosophy of the project and the masterplan, the building must be able to be completely disassembled / recycled in 10 years later.

In consonance with the principles of C2C, the building was constructed without any earthworks movement. Also, the foundation is made with driven piles which allows to be recovered in the future. Moreover, the structure and façade allows the complete disassembly and reuse as most of the materials are biodegradable and / or recyclable. Besides, sanitation systems eliminates the generation of waste, the building feeds with clean energies, etc.

Last, the building aims to be the seed capable of solving the problems of the area. The building as an environmental regenerator but also as an economic and cultural activator of the place.

Flexibility and Furniture
The building is constructed with a honeycomb shape structure whose backlit facade reminds of the old factory buildings. This structure generates two clearly different types of spaces: the cell of the bottom area of the façade that contains rigid programs such as offices, bathrooms, kitchen, etc. the upper cell that acts as warehouses, facilities rooms etc. On the other hand, located behind the cell, there is a large Hall that allows the accommodation of almost any type of activity as the uses can be easily changed and customize due to the design of mobile furniture: A large staircase, a series of tubular lamps, a portable office that gives the space electricity and lighting, an inflatable structure that unfolds in a few minutes, a kitchen with wheels or a wardrobe. 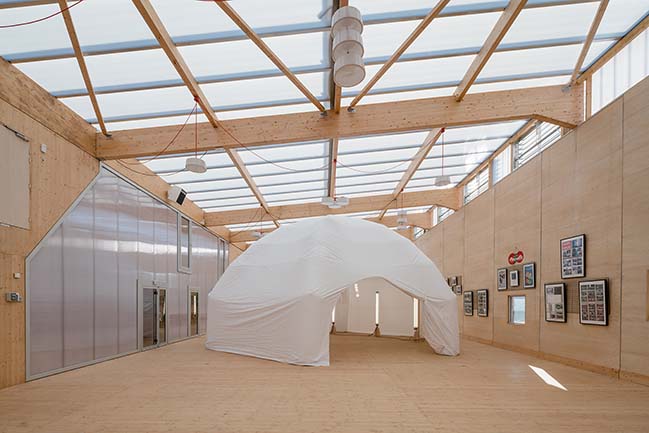 Energy Management: Thermal Onion
The configuration of the building generated by the structure eases the heating system establishing different degrees of thermal comfort. For example, one of the upper cells has a pellet hopper that feeds the boiler, the smaller cells are heated by the boiler and the large hall accumulates heat in winter. The polycarbonate roof of the hall is used as a greenhouse in winter while in summer there is cross ventilation due to the system of gates located in the facade. In addition, part of the energy of the building comes from the photovoltaic panels of the facade. 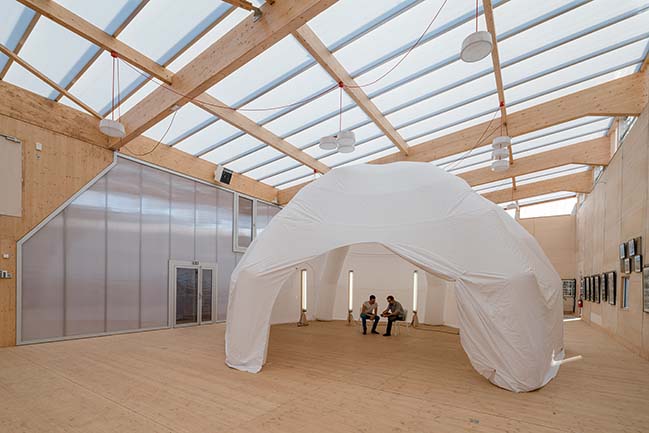 Water Management: Ecomonumentality
The main facade of the building that is made with louvers which protects the building from direct insolation coming from the south, is interrupted by 3 large black chimneys. These chimneys are in reality 3 dry toilets which eliminates the use of water of the sanitation system of the building, generating a composting cycle. The black chimneys heated by the sun, helps to the evaporation of waste liquid through the turbine located on the upper side part of the chimney. These façade elements are the evidence of the building's commitment with the environment, generating a sort of eco-monuments. 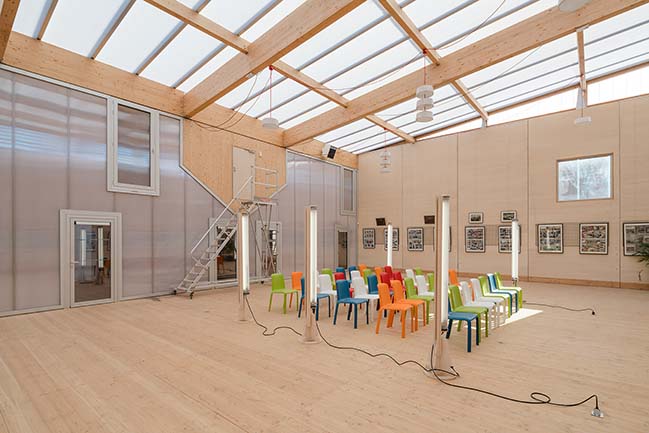 At the same time, the building is equipped with a rainwater harvesting system located in one of the upper cells of the building. The system consists of two recycled tanks and a filter. In case of water excess, the remaining water drains to an artificial lake next to the building. The water, after being filtered, is used for maintenance and gardening. 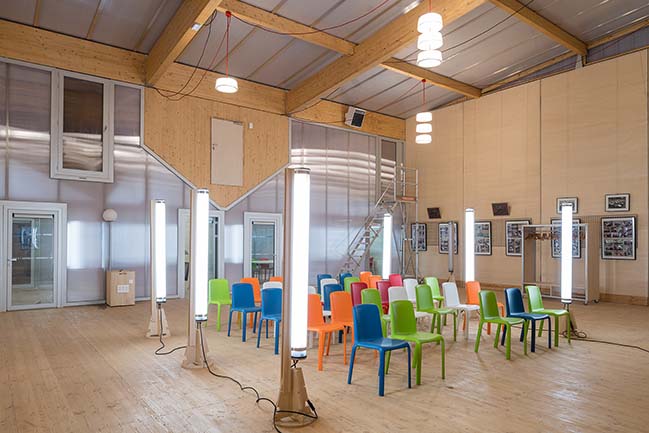 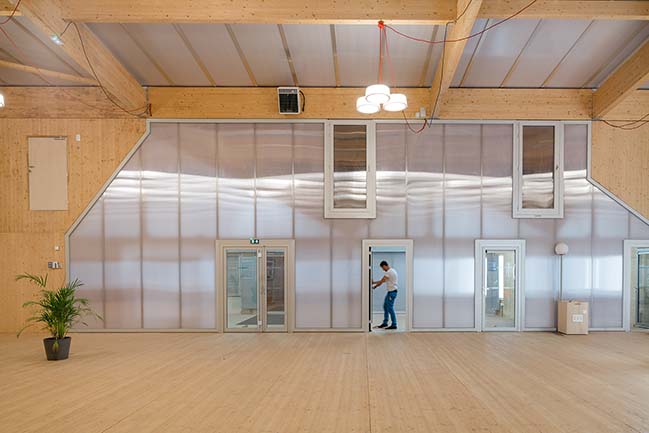 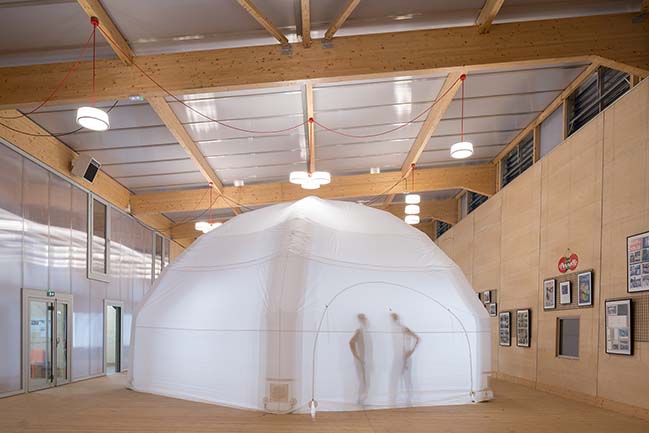 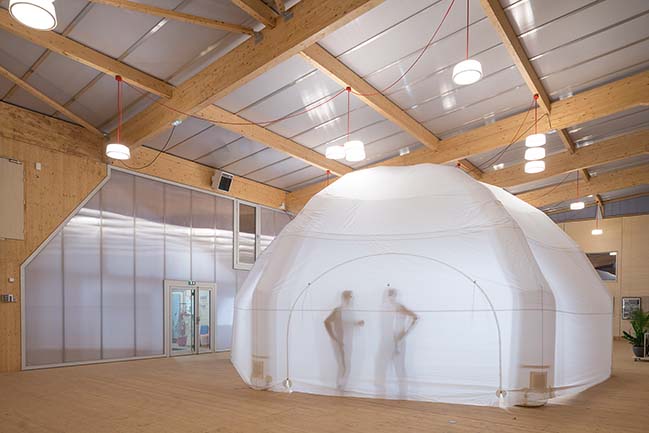 > YOU MAY ALSO LIKE: Social Housing in Paris by Atelier du Pont 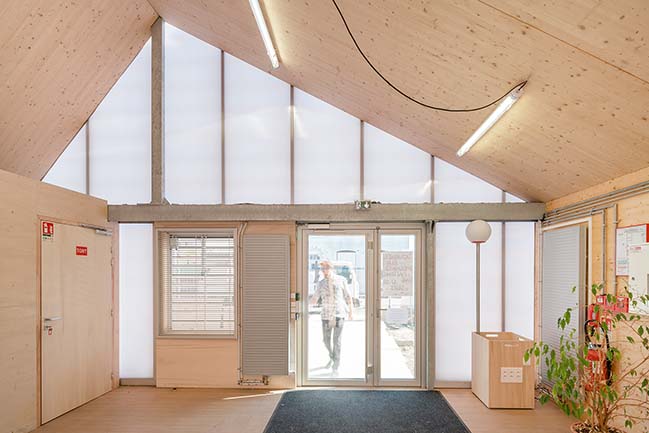 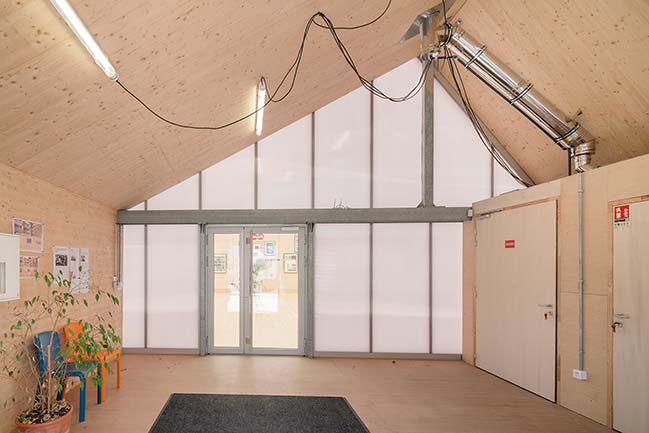 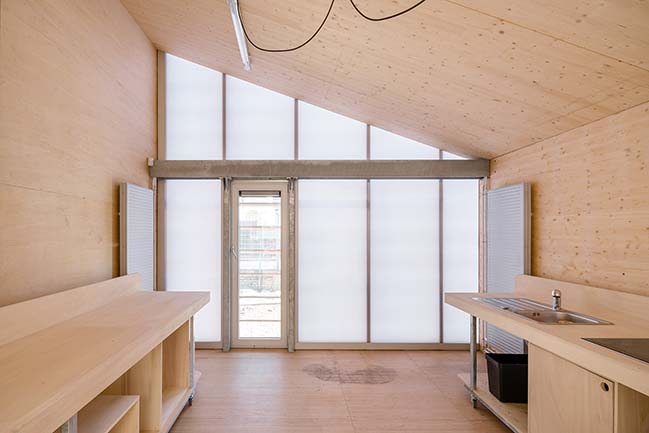 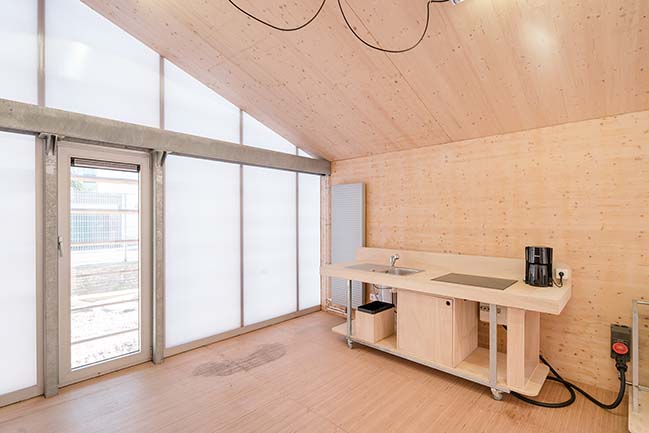 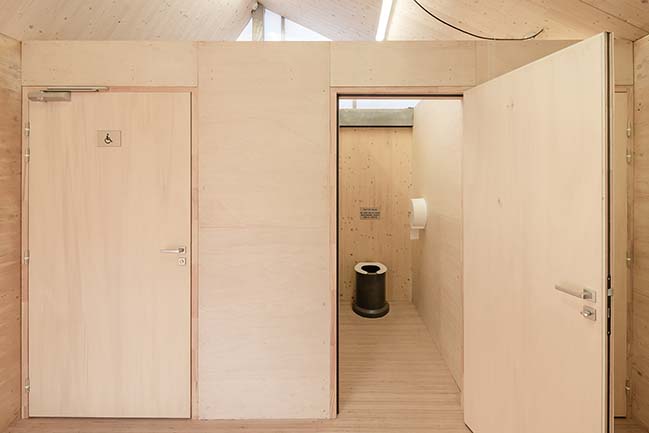 > YOU MAY ALSO LIKE: Studio Gang redesign Tour Montparnasse in Paris 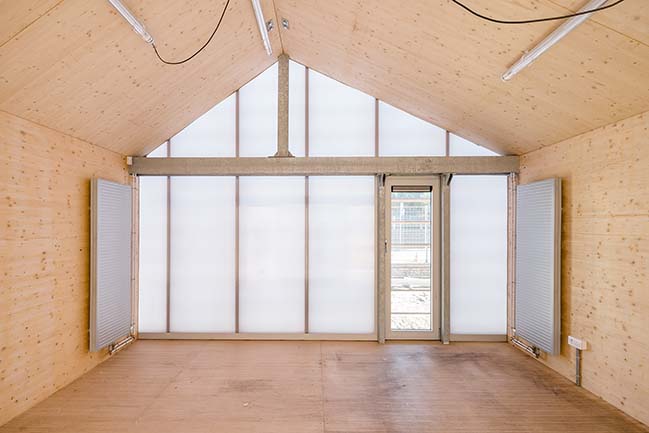 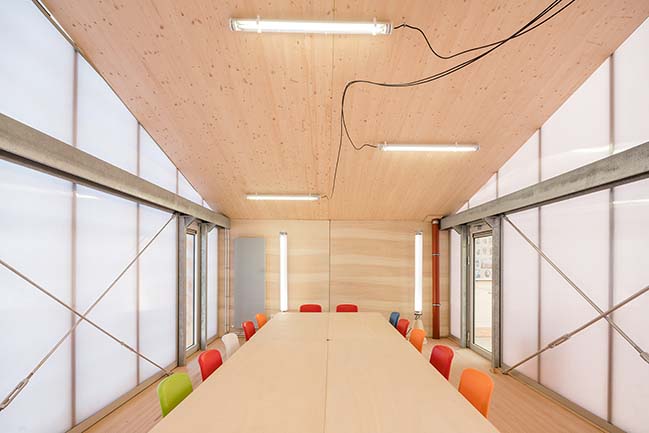 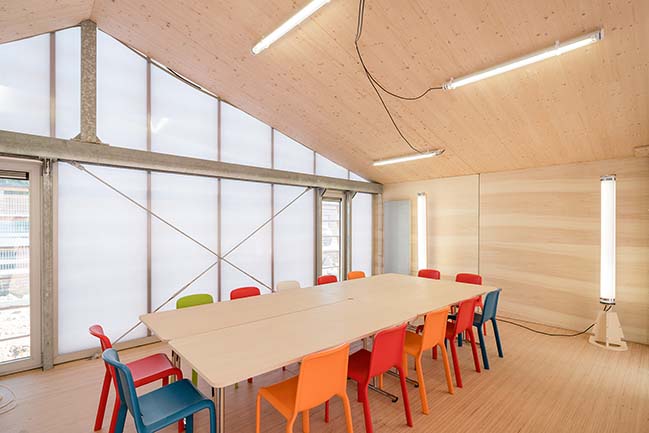 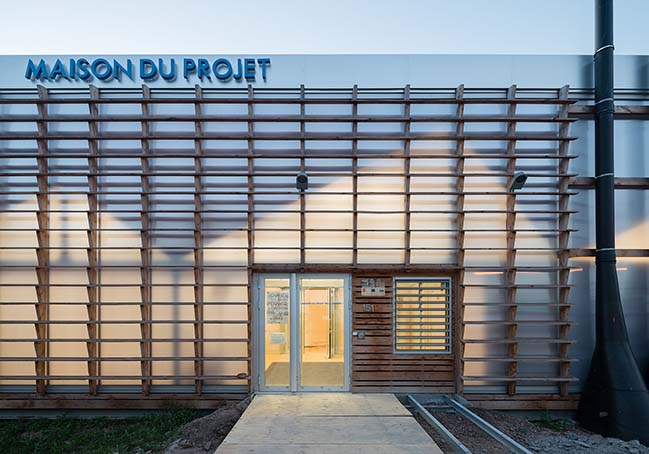 > YOU MAY ALSO LIKE: 1Hotel Paris by Kengo Kuma and Associates 12 / 02 / 2018 Maison Du Projet is the first C2C (Cradle to Cradle) building in France. A regenerator of a former factory, it is an economic, cultural and environmental activator