MEIS’s project has presented us with a place both complex and heterogeneous. It is a museum, but also a place of memory, part of the city and of the collective consciousness: a historical monument. It is also a project of multifarious landscapes and assorted natures, such as the urban scenario around the harbour and the area stretching from there to the south west of Estense  Castle, the ex prison, and the inescapable relationship between the city of Ferrara and the Hebrew culture. 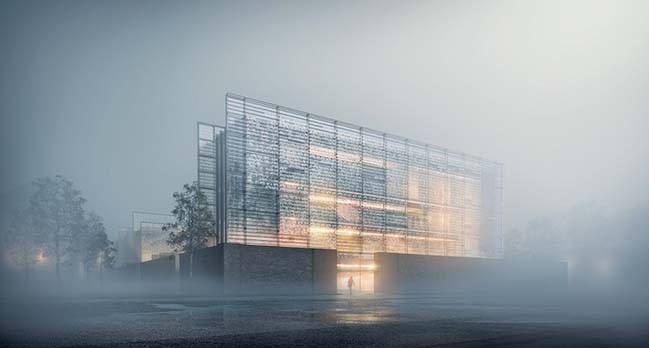 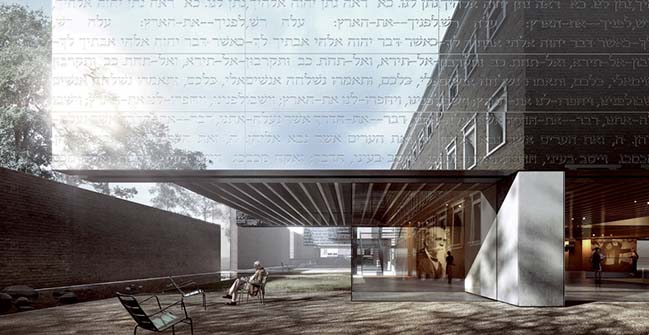 From the architect: In other words, a landscape through which memories run and intertwine in a highly articulated manner; a combination of marks and signs, both physical and intangible, ordered and given meaning through the architectural project. This project draws heavily on pre-existing buildings, contributing to the natural stratification of tracks, signs and sediments that has always been a part of the natural evolution of Italian cities. And this is not by chance: a courageous choice by the competition commission has permitted us to work in a substantial manner on a historical pre-existence, creating the fundamental hybridization that is the pursuit of evolution in every architecture. 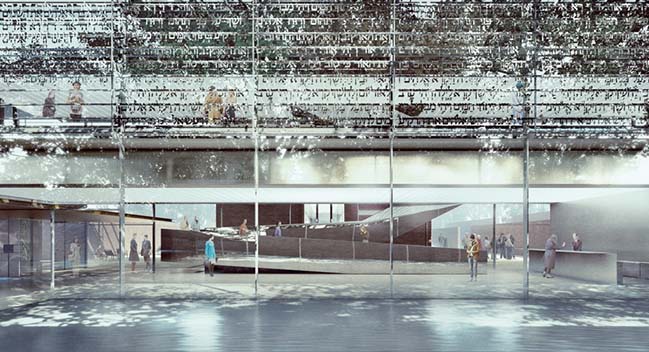 Like two-faced Janus, the identity of the thought behind this project is based on a double point of view: looking simultaneously at the past and the future. A critical eye selected the salient elements on which to position the new functions of the museum: the orientation, the placing of signs, the size and urban scale, the enclosure that would be interrupted to open the place up to the city. The walling, typical of an ex prison, must turn into an element from which to regenerate the relationship with the city: transforming closure into opening and distance into proximity. The Museum of Italian Judaism will be a museum of the city, a museum for the city, an open space: some areas will be freely accessible, such as the entrance lobby, bookshop, restaurants, part of the temporary exhibition area and the garden, which will be an imaginary place “beyond the wall”, continuing the theme of Ferrarese gardens, from the Herculean addition made by Corso Ercole I d’Este to the Garden of the Finzi-Continis. 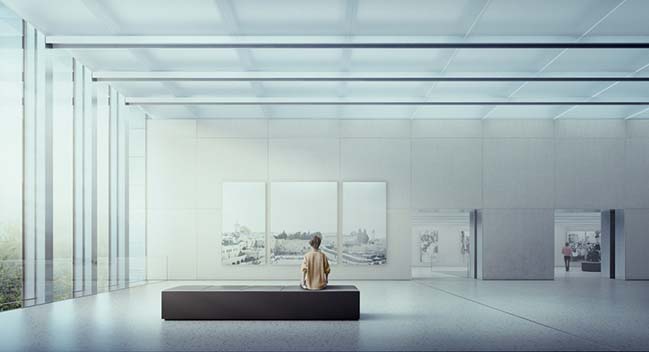 Volumetrically, the five elements coming in sequence one after another symbolically recall the five books of the Torah, the Pentateuch, becoming at the same time elements that contain and are contained: the book is a metaphor for awareness and reason. Prominent passages from the Torah, to be chosen with the Jewish community, will be written in bas-relief on the wall of the museum. Regulating the intensity of the internal light will be a transparent and permeable brise-soleil over the entrance facing the city with a recess in the exhibition part. 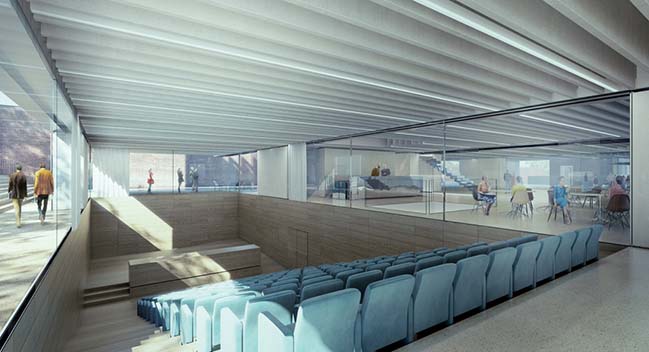 The areas dedicated to exhibiting works of art have been conceived as neutral spaces so as not to interfere with elements on show: as in the inside of a fly tower, there will be a series of movable backdrops that can be placed in multiple configurations to generate varied possibilities of use for the space. All areas will be lit with indirect and diffuse zenithal lighting: by means of vertical apertures at the sides of the exhibition rooms, the city will enter and become a part of the construction of the internal space in a significant manner. Culture and memory are elements that are in continual evolution, interpretation and mutation, and they are characteristics with which the contents on exhibition will be contaminated: the internal fitting will be interactive and digital, showing images that are continually updated, adapting to the sensibilities of the visitors and the times. Designing a multi-medial project for a museum that is so rich in historical memories and iconographic references implies a complex use of the potentials of video. 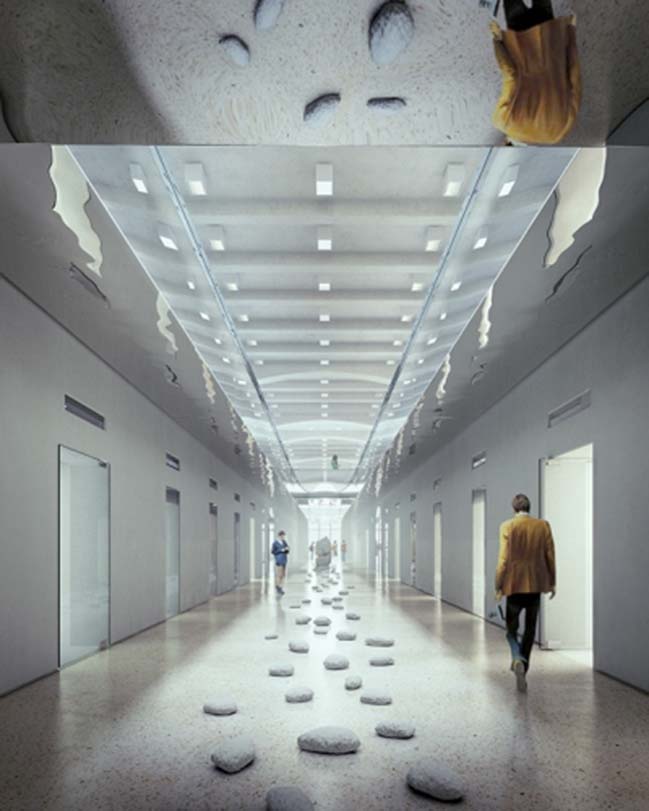 On the one hand, it is a case of making historic and iconographic material usable in the most functional manner possible, on the other hand, it is a question of immersing the viewer in another dimension, tied to the images in motion. All the natural existing interfaces designed at the cutting edge of interactivity will also become a part of the interior project; the architectural spaces can be made thematic and scenographic with large video images designed to fit them. 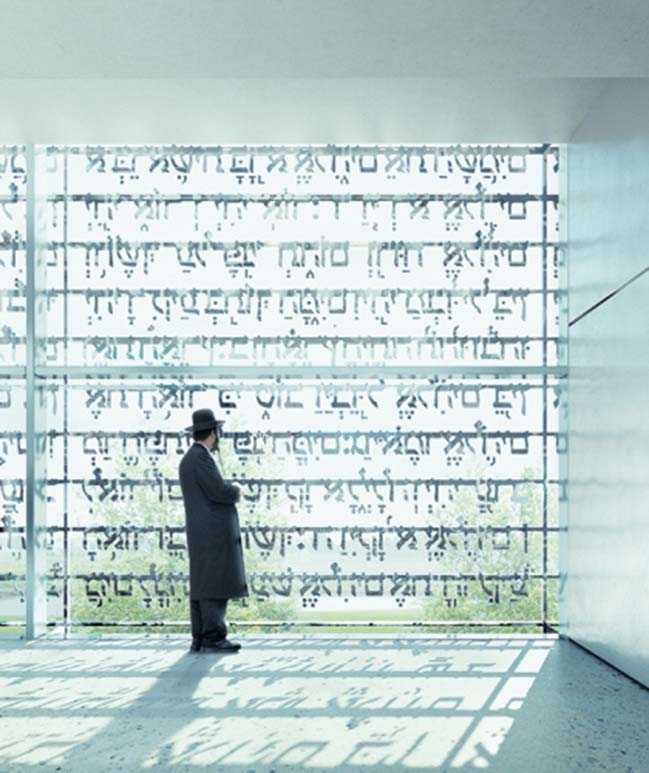 This museum will not only house a collection of beautiful objects, but also an instrument and a place to communicate ideas and memories and an incubator for new common culture. 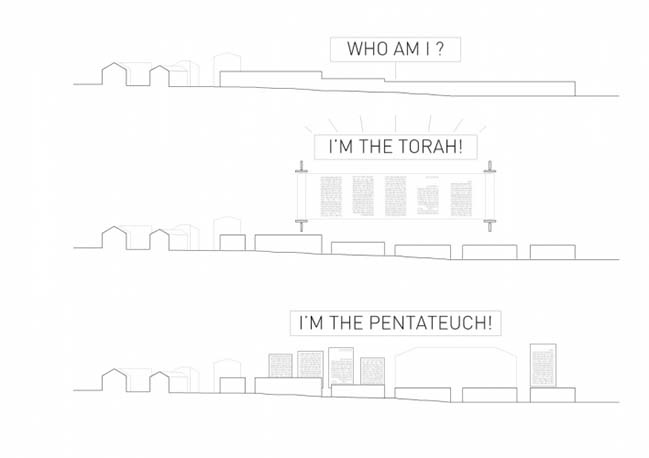 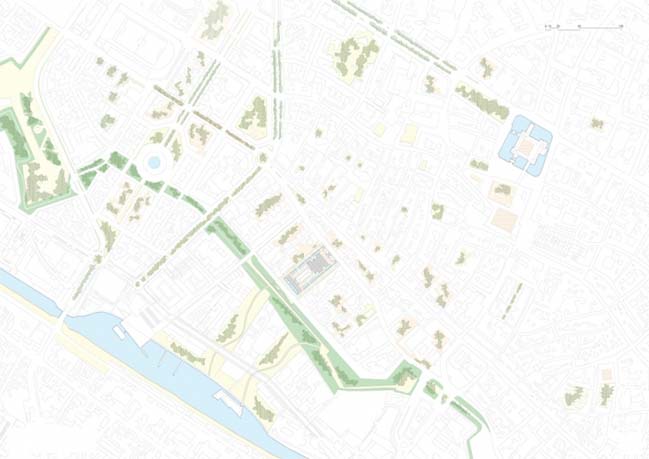 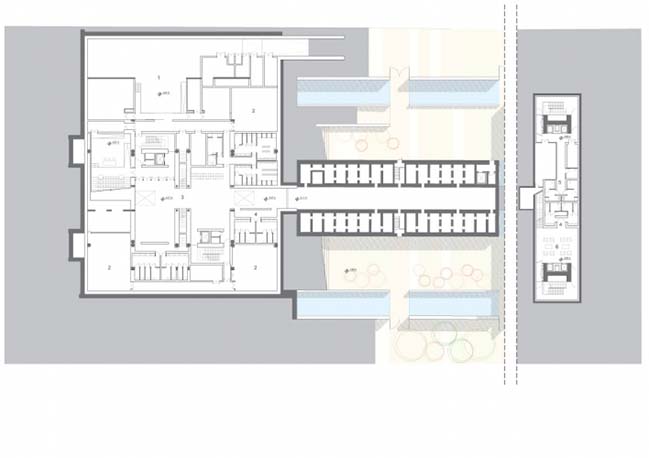 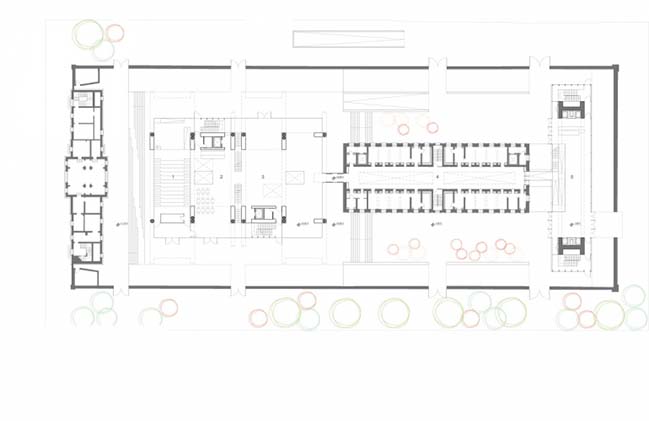 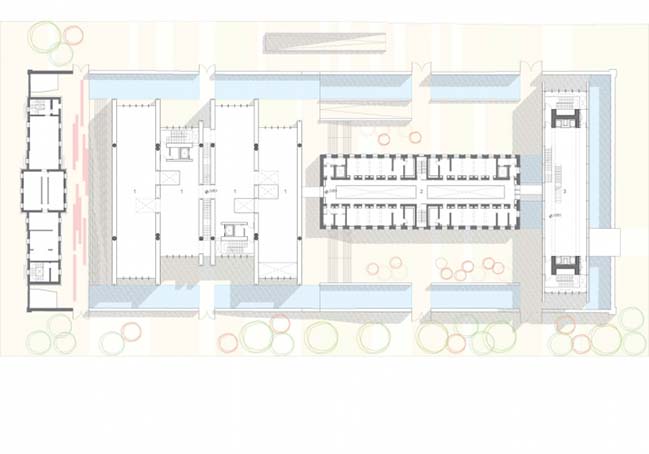 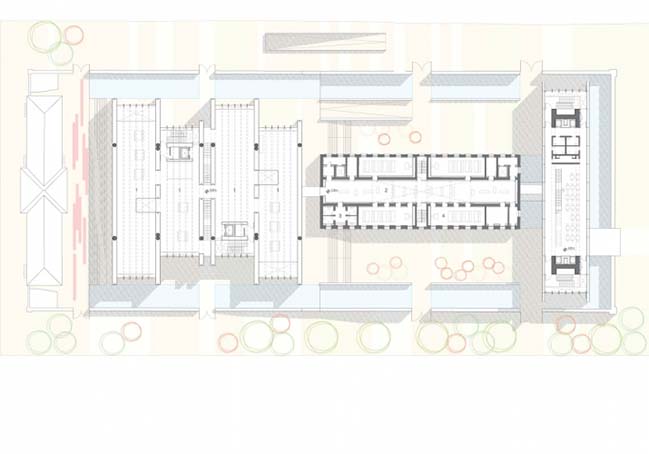 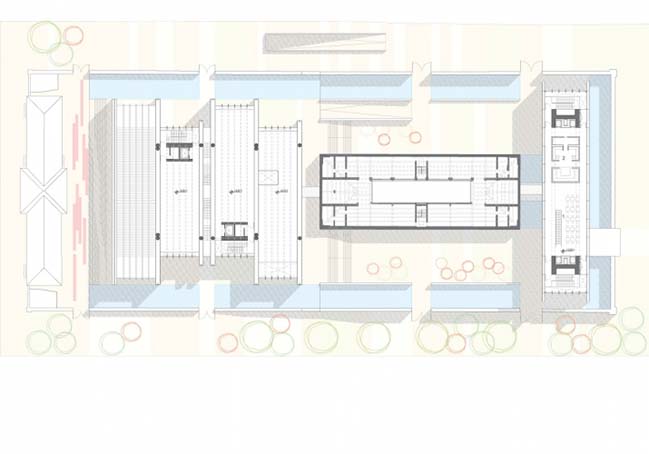 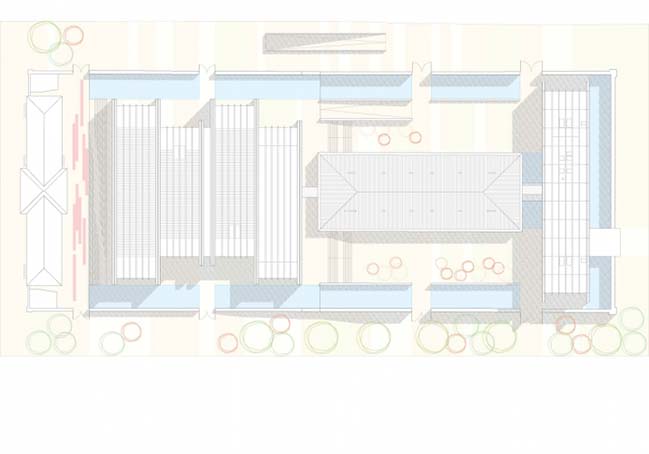 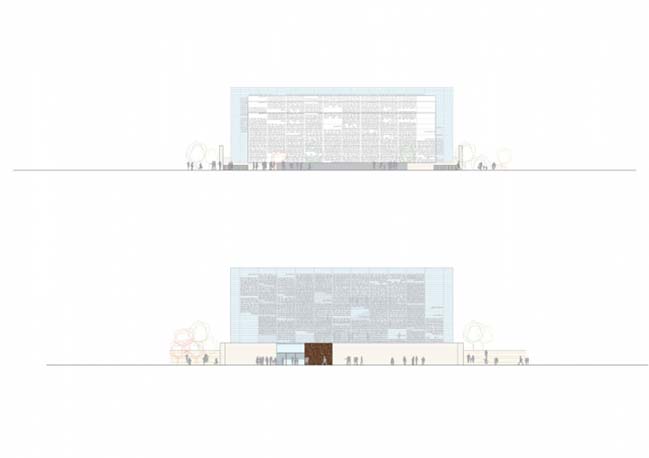 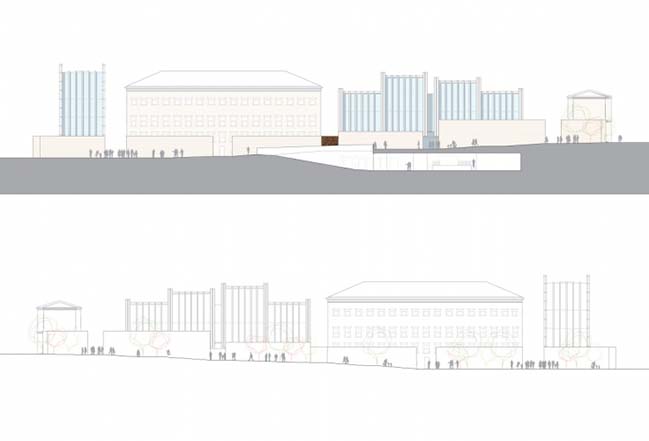 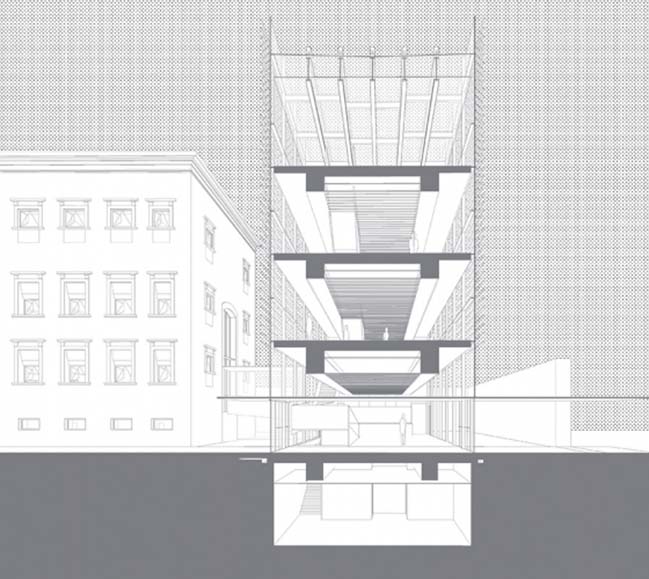 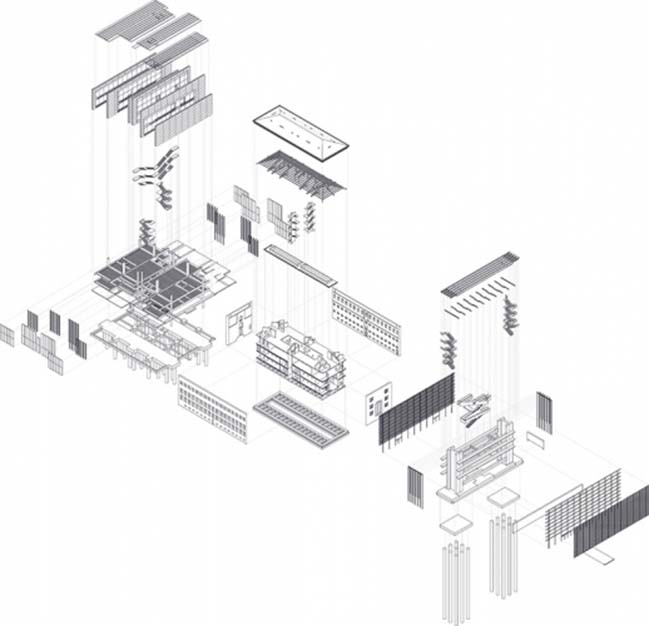 12 / 21 / 2017 MEIS’s project has presented us with a place both complex and heterogeneous. It is a museum, but also a place of memory