ODA New York has been tapped to redesign of the historic post office in Rotterdam, Netherlands. Sitting vacant for more than a decade, Rotterdam’s former Central Post Office, the iconic Postkantoor, will now bring new life back to the city’s center. 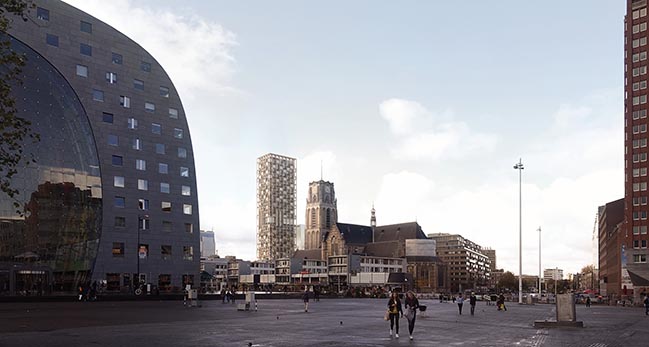 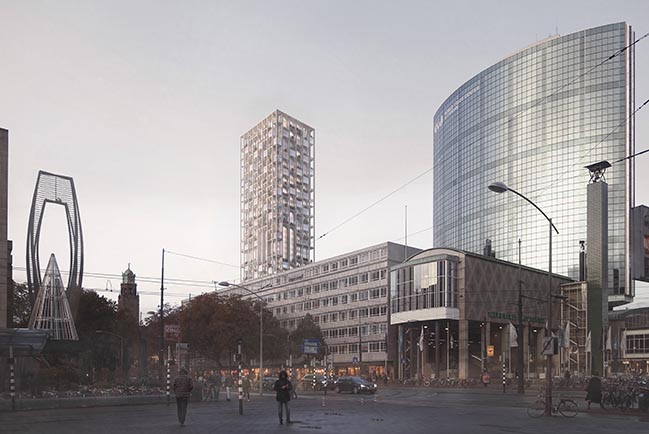 From the architect: POST Rotterdam, a 58,000 sqm adaptive reuse project, is a wonderful example of the revitalization that is happening in Rotterdam. While most of ODA’s work over the past decade is located in the United States, the 50 structures they have built in New York City are now informing their ability to build smarter cities abroad, and winning them multiple international projects from London to Paris to Mexico City. 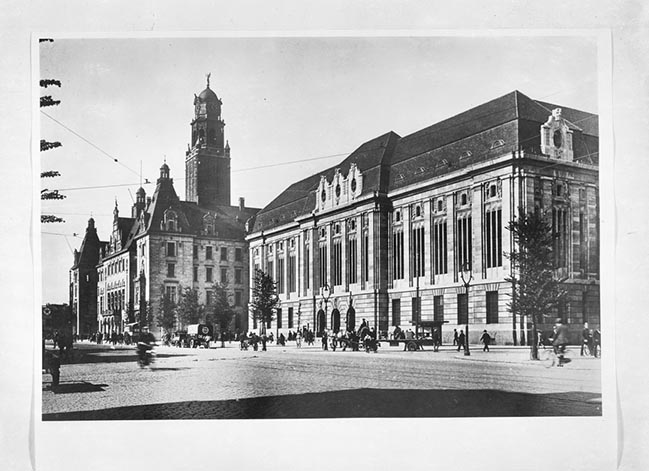 Located in this port city’s bustling center, this historically important building stands as a testament to the inextinguishable spirit of Rotterdam. Built in 1916, it was one of the only original structures still standing after Rotterdam Blitz, the aerial bombardment that in 1940 leveled nearly all of the city’s historic core.

Restoring, designing and engineering the conversion of such valuable heritage requires the utmost reverence for the remarkable history of the building, but also the vision and ambition to deliver a civic hub worthy of its central setting. The City of Rotterdam’s objective is to re-energize the city center with the activation of this site through a combination of residential, retail, and hospitality programming. 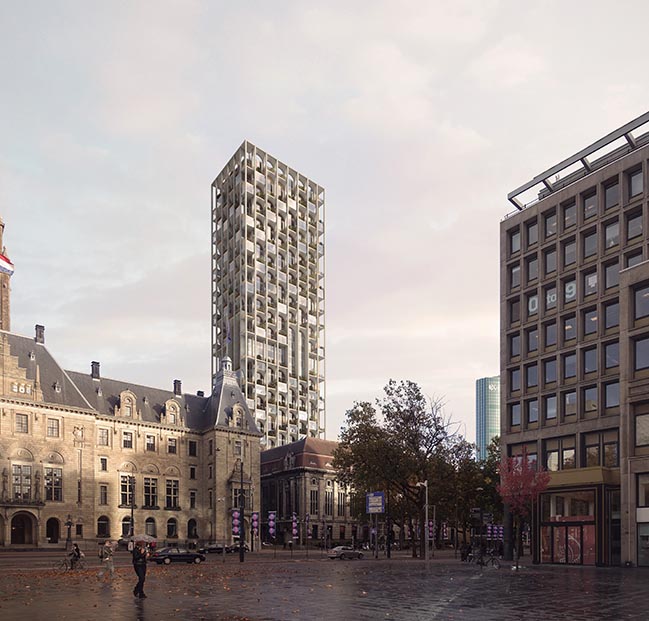 Team of experts - Omnam Investment Group, the international development firm with a proven track record of success at the highest levels of preservation, is committed to restoring this treasure to its former glory, Omnam undertook an exhaustive architectural exploration, soliciting design proposals from such renowned architects as Bjarke Ingels and Daniel Libeskind. Ultimately, Omnam and the Municipality of Rotterdam chose ODA New York, who’s inventive and contextually sensitive approaches to complex settings, rendered the NYC-based studio an ideal fit for the lead design architect on this important project. ODA is working closely with Braaksma & Roos Architectenbureau, widely recognized for their adaptive reuse expertise and skilled heritage assessment. ABT, with a diverse expertise in the Netherlands, is serving as the local architect of record.

Both firms are working with various municipal and national committees, addressing the inherent values of the building and potential ways to reinvigorate it. West 8, the lead landscape architect for the Coolsingel redevelopment, will also lead the landscape design for the POST, maximizing opportunities for connectivity on the surrounding streets. 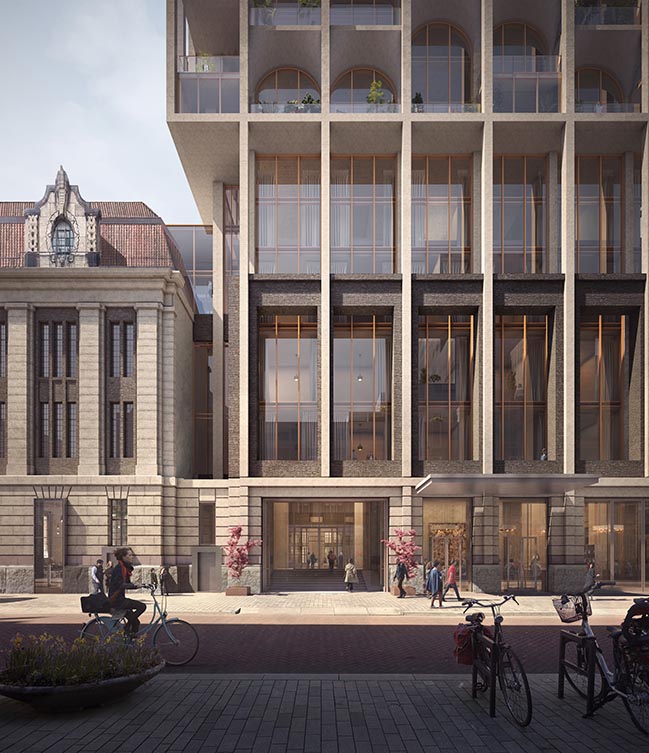 Design Brief - True to precedent, ODA conceived a dynamic mixed-use design, resolving to both preserve and adapt the Postkantoor’s original construction. The POST, a building to be celebrated and enjoyed, will be a civic node distinguished by the kind of seamless connectively that have become one of ODA’s hallmarks.

“We believe that it’s time for the POST to stand not only as a memory, but also as an expression of the strength of Rotterdam today as a vibrant, connected, center of culture, renewal, and quality of life. We believe that the hidden treasures that it holds should be shared by all citizens,” says Eran Chen, Executive Director at ODA. “The POST tower is a reinterpretation of both urban living and the Post Office’s architectural assets, extending the elegance of the main hall through to the tower. This modern addition to the Ensemble Buildings in the Coolsingel district is based on an extremely rigorous investigation combined with the expertise gained over two years working with city partners.” 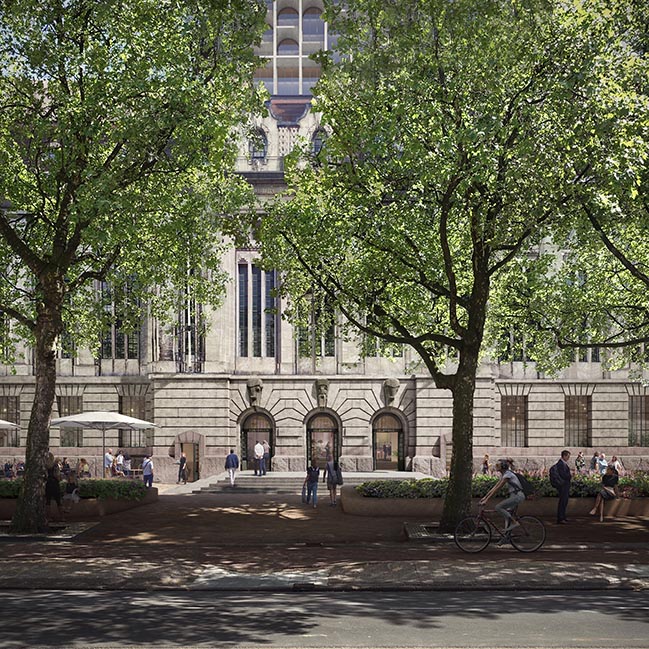 In a subtle nod to context, ODA mirrors the rhythm of five-foot spacing between columns on the Postkantoor’s facade in a stone grid that defines the tower. Designed with nonpareil windows, the POST tower shows openings that vary in size and shape to funnel daylight. This variety sets a break from the series of glass-facade towers along the new Rotterdam skyline, and celebrates the elegance of the main hall along its profile. 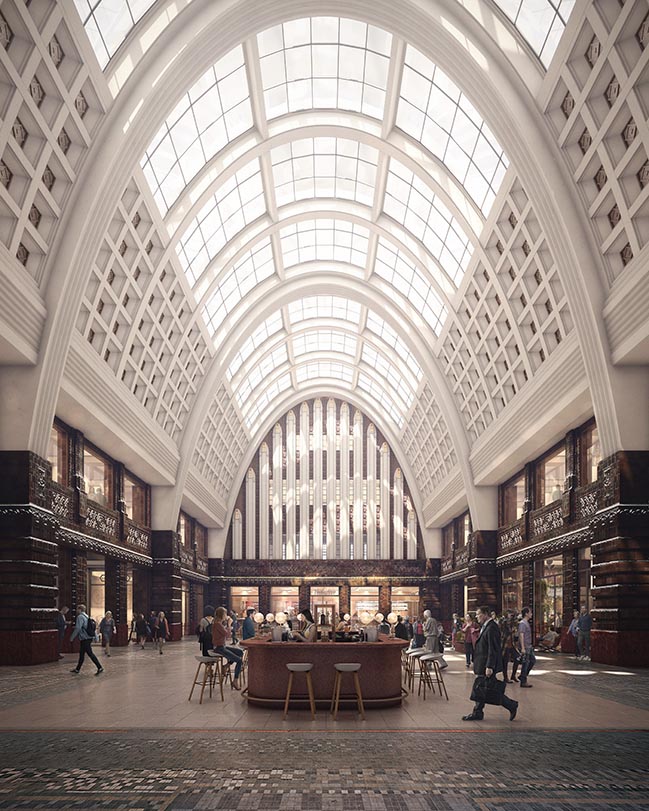 At the street level, the majestic Great Hall — a vaulted, 1916 marvel soaring 22.5 meters (almost 74 feet) in height — will undergo a faithful restoration to serve as the project’s public heart, fed by existing entrances at Coolsingel and Meent. A new entrance on Rodezand will render the hall accessible from all sides, and will connect with the building’s back courtyard to form a sweeping passageway. Throughout the hall and courtyard space, a slew of public amenities — in the form retail, galleries, restaurants and cafes, many with open sight lines to the Coolsingel and Rodezand streets — will add up to the city’s pedestrian experience.

“The next step in the life of such an iconic heritage building is to search for an optimal balance between conservation and change,” says Job Roos, founder, Braaksma & Roos Architectenbureau. “Unveiling the story of the Post Office and analyzing the possibilities for adaptive reuse has led to an unexpected and unorthodox outcome.”

The upper floors, formerly dedicated to the telegraph and telephone services of the Post Office, will be revived with a unique five-star hotel operated by leading brand Kimpton. Accessible from every side, this monument will, once again, serve as a point of engagement in the city center, a link between Rotterdam Centraal, all the way to the bustling Markthal. 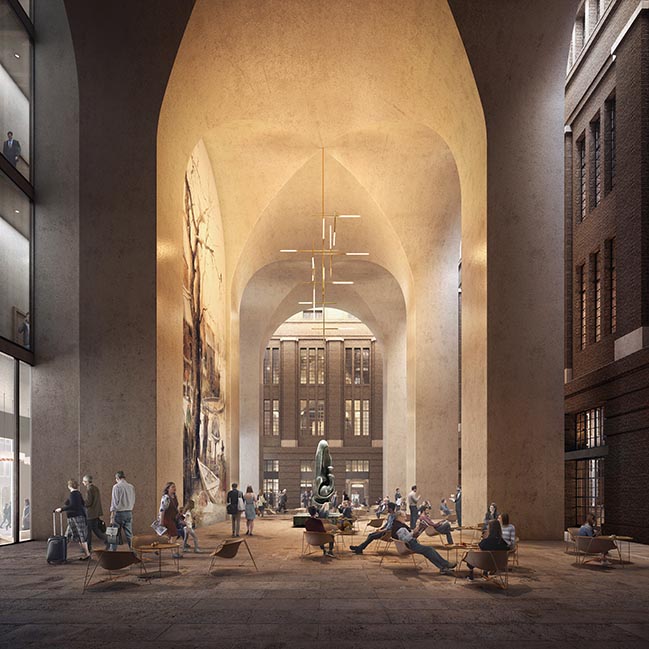 The new Postkantoor will update the skyline without rupturing it, and the community will be offered a renewed take on a building full of memories. Fashioning this new mixed-use structure from such an historic monument isn’t the only challenge this project must overcome. Building a skyscraper on weak soil and delivering an iconic place on a feasible process provide additional obstacles, but the success of this, or any, project lies not in compromise, but in catalyzing the synergy that celebrates these forces’ coexistence.

As Rotterdam’s population densifies and the skyline expands, creating a gathering place that integrates urban living with a balance of mixed uses will result in a civic hub worthy of its origins. With construction set to begin in 2019, this project provides an opportunity to create a cohesive civic vision for the Postkantoor; bringing people, place, and events together. This fusion of spaces: indoor and outdoor, public and private, historic and future-facing, will not only fulfill the Postkantoor’s inherent value, but also set the bar for new projects around the world. 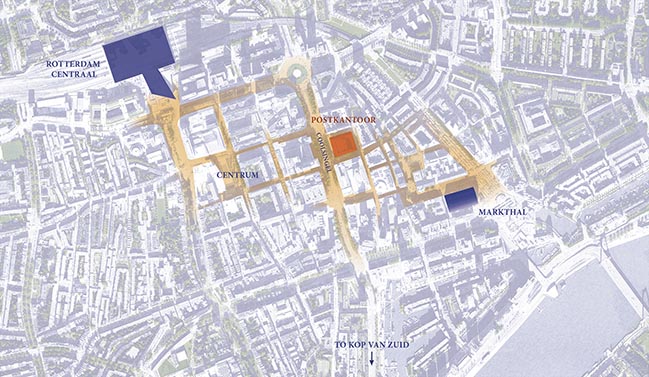 Context - By the end of the Second World War, Rotterdam had been all but reduced to rubble. The Netherland’s second city was stripped of its history; but, ultimately, not in vein. The city’s wholesale destruction, it would turn out, left Rotterdam positioned to host one contemporary Europe’s most riveting architectural developments. With less historical cues to dictate new construction, the city became a testing ground for new and radical architecture. Over the past 60 years, and especially the last 20, Rotterdam has undergone rapid transformation —emerging from Amsterdam’s shadow to become what the travel experts at Lonely Planet have called “a veritable open-air gallery of Modern, Postmodern and contemporary construction”. Projects like Piet Blom’s Cube Houses, MVRDV’s Markthal, and OMA’s De Rotterdam have captivated architecture lovers from all over world.

Meanwhile, Rotterdam’s long vacant former Post Office stood empty, as a silent witness to this dramatic renaissance. Thus, nearly a hundred years after it was built, the current effort aims to reconnect the Postkantoor to its energetic surroundings — to reclaim its place as a meaningful and civic component of the city’s urban fabric. 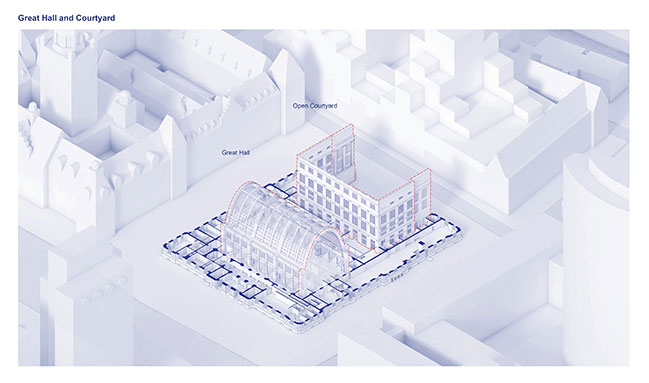 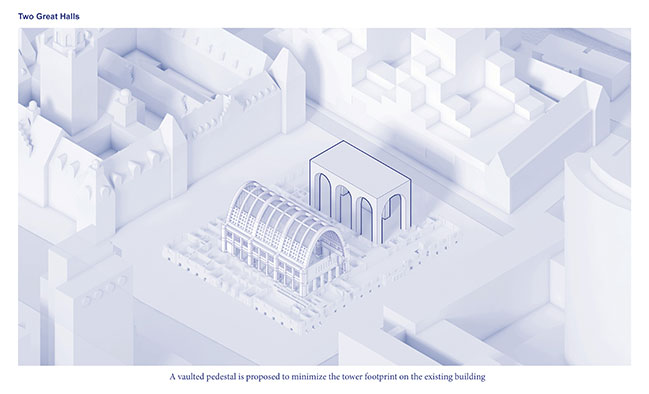 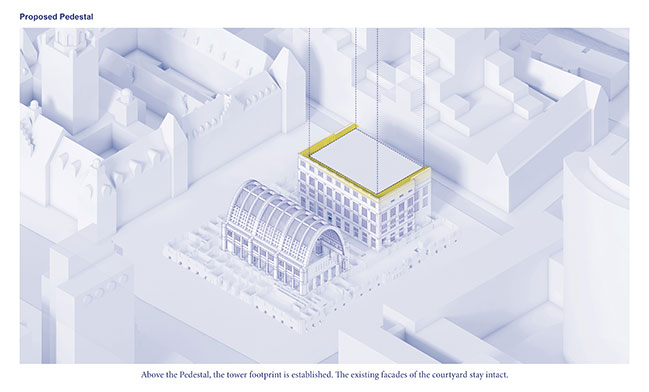 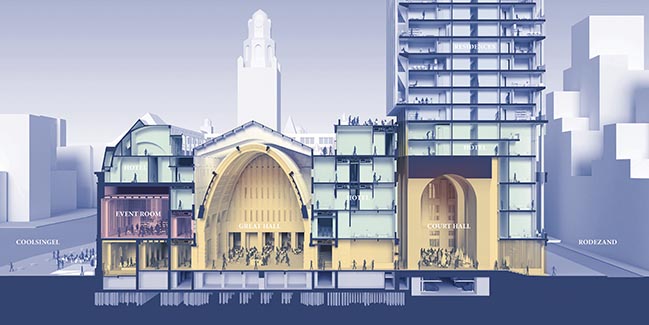 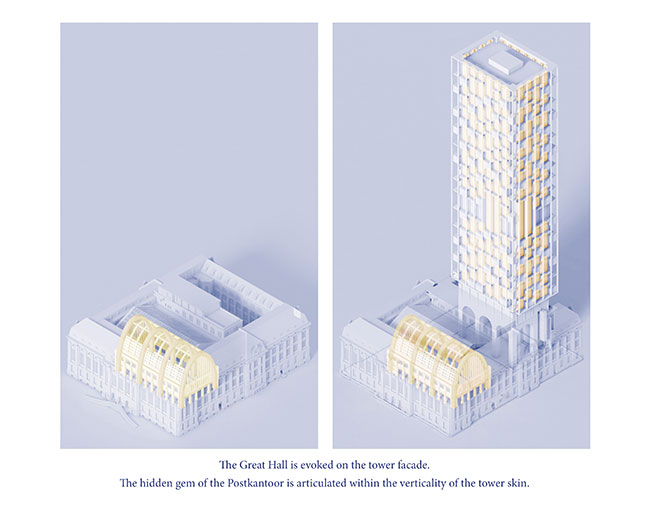 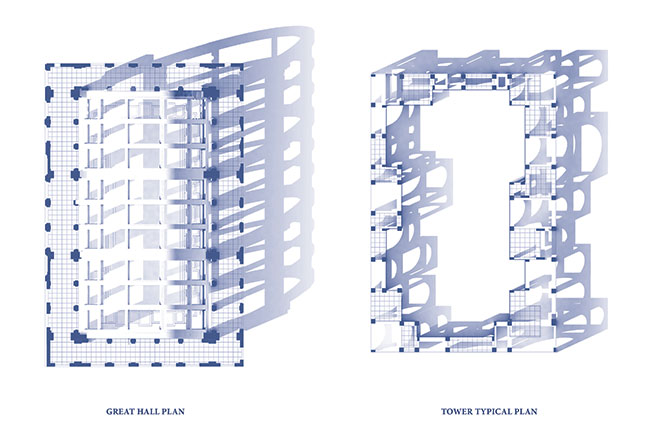 02 / 01 / 2019 ODA New York has been tapped to redesign of the historic post office in Rotterdam, Netherlands. Sitting vacant for more than a decade, Rotterdam's former Central Post...

Recommended post: Happy by Studio Cadena is the Winner of the 2018 Flatiron Public Plaze Design Competion