Located along Bellingham’s revitalized waterfront, the acid accumulator from the defunct Georgia Pacific tissue mill has been transformed into a new public art installation placed in Waypoint Park along Whatcom Waterway. 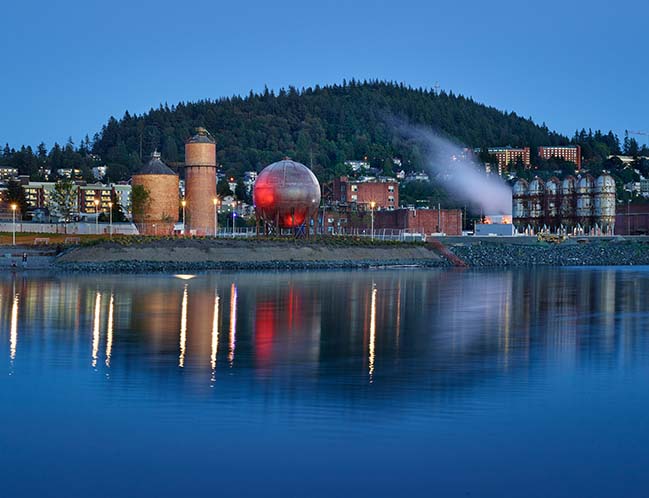 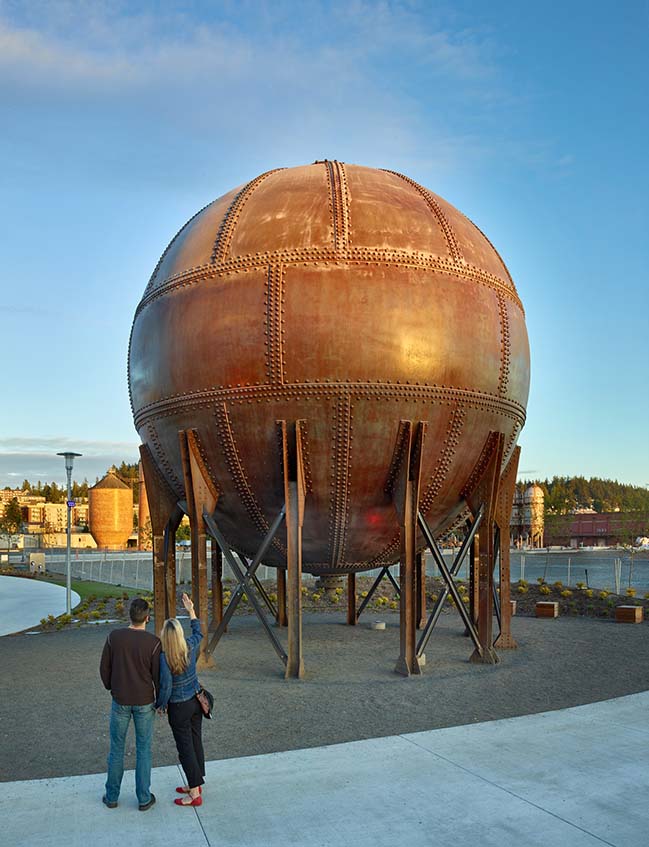 From the architect: Funded by the city’s One Percent for the Arts program following an international call for proposals for the “design, fabrication, and installation of embellishments” to the acid ball, the winning design proposal was by Seattle-based Mutuus Studio—a studio whose interdisciplinary design philosophy is based upon a close interaction between architecture, art and material exploration. 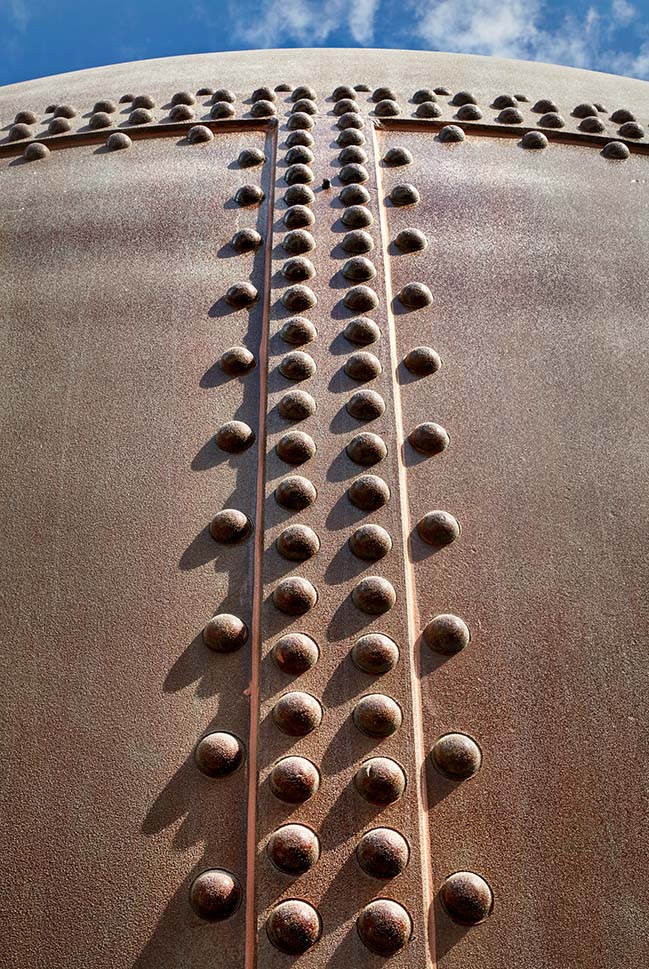 “The Percent for the Arts program allocates 1% of the budget from our largest projects for the incorporation of artwork," said Darby Cowles, City of Bellingham Senior Planner.” The acid ball is particularly exciting because it utilizes a phenomenal piece of industrial equipment in a new and interesting way, providing a unique landmark for Waypoint Park that honors the history of the site." 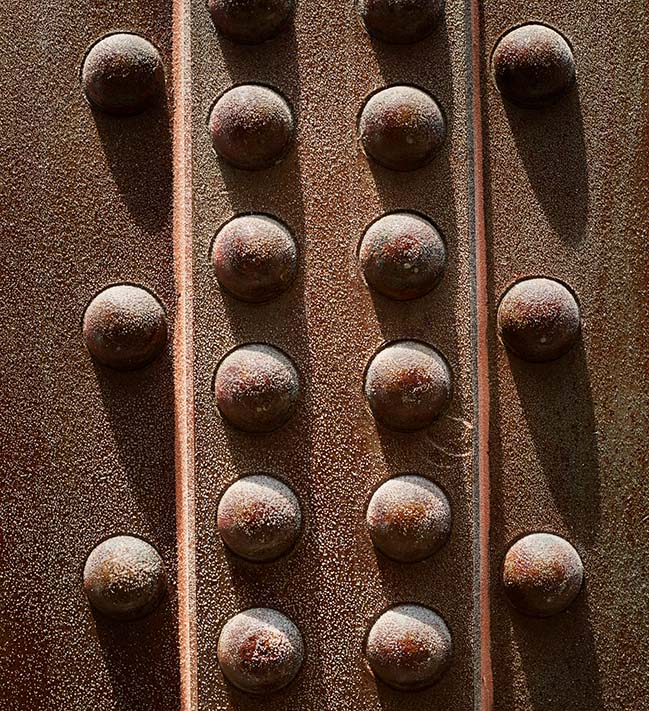 The circa 1938 sphere—approximately 30 feet in diameter and over 400,000 pounds—was once used as part of a relief system that held liquid and gas from nearby digester tanks that broke down wood chips with pressure and acid. It remained a powerfully authentic artifact connecting the community to Bellingham’s mighty industrial past (the acid ball was part of Georgia Pacific's pulp plant which operated on the adjacent site). “There’s a real desire to understand these objects and carry them into the future so that people can understand not just an industry but the movement of time itself,” states Saul Becker of Mutuus Studio. Acknowledging both its history and its new life, the transformed artifact is titled Waypoint – a stopping place on a journey. 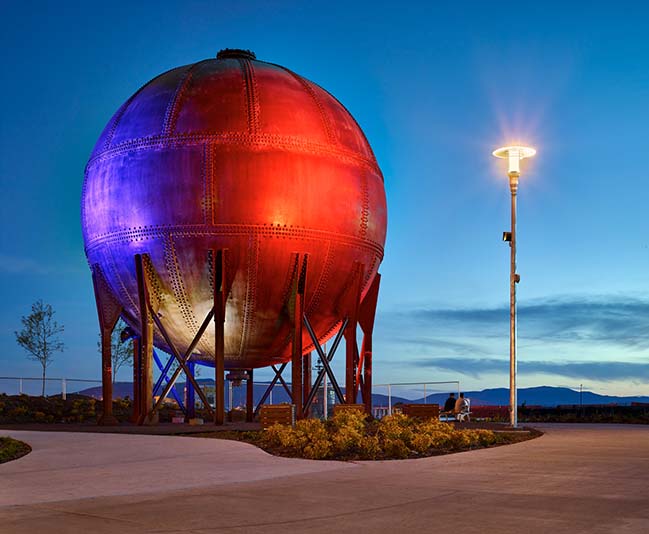 We began by asking, “What is the smallest big move we can make?,” notes Kristen Becker of Mutuus Studio. The studio’s concept is intentional in authentically representing the industrial character of the artifact by maintaining the integrity of the existing shape and form. Early concepts that augmented, pierced, punctured, sliced and/or changed the object into something different were quickly cast aside. The firm's design approach is simple and restrained. At its core, it's one MACRO move at an urban scale, combined with one MICRO move at an elemental scale. At a macro scale, by repositioning the ball to the water’s edge, it becomes a beacon from land and water and a visual terminus to the existing axis of the courthouse stair. The artifact’s new location draws people into the site to explore and approach the artifact connecting it to both to the city and the water’s edge. “When we thought of a durable, low maintenance, vandal and weather resistant coating, we realized what could be more appropriate than a coating used for highways and roads?” Mutuus Studio studied high index reflective glass bead traffic coatings (0.008 inches in diameter) and were continually surprised by experiments with this humble material and mesmerized by the way the light bounced and interacted with the environment around it. 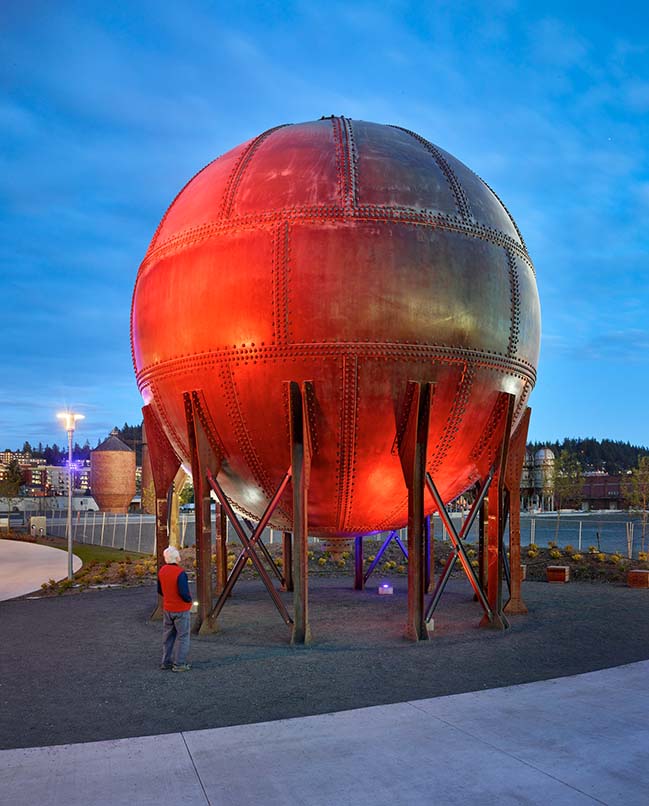 “Waypoint” was lifted and moved over 1,000 feet from its original location near the historic Granary Building to the newly opened 33-acre Waypoint Park. From a flashlight to headlights of a passing car, from a sunbeam to a waning moon, “Waypoint” harnesses the light around the City of Bellingham and changes through every season, throughout the day and night. Notes Kristen Becker of Mutuus Studio, “As designers and artists, that was a really vital part, having something that wasn’t just this piece that you see once and you check that box, but something that you’d want to come back to and experience in different light." 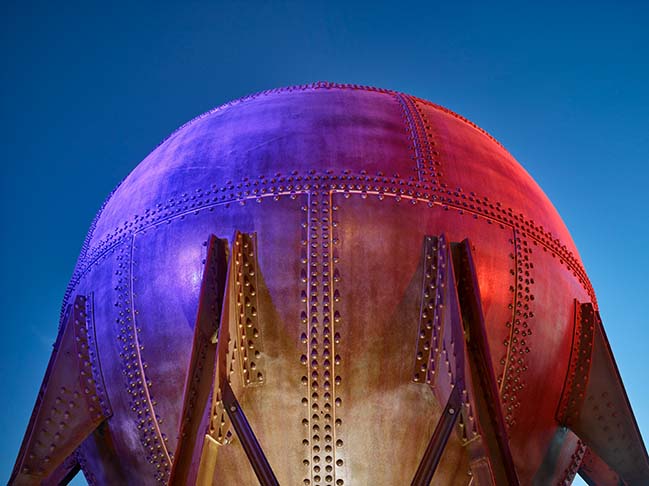 YOU MAY ALSO LIKE: Central Park in Ho Chi Minh City, Vietnam by LAVA + ASPECT Studio 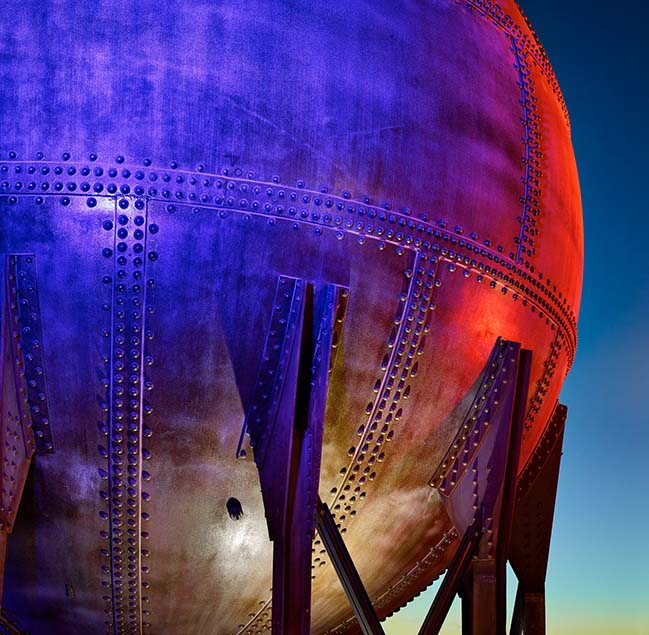 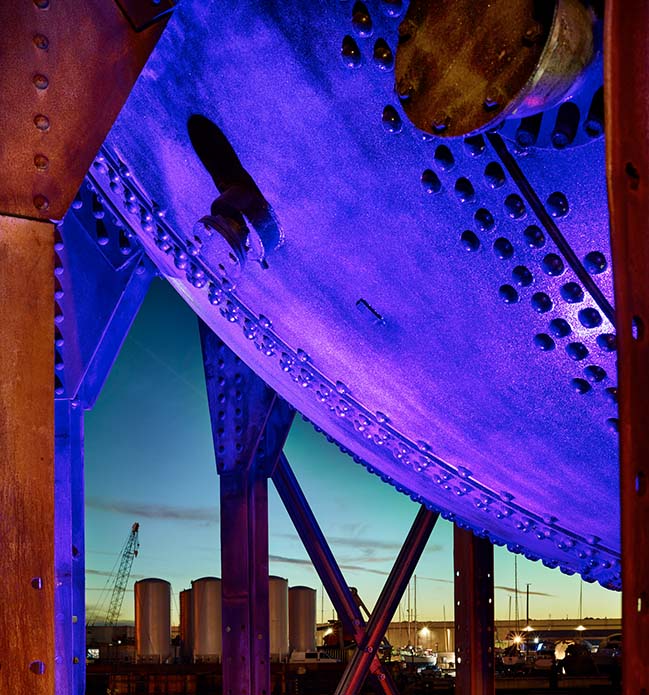 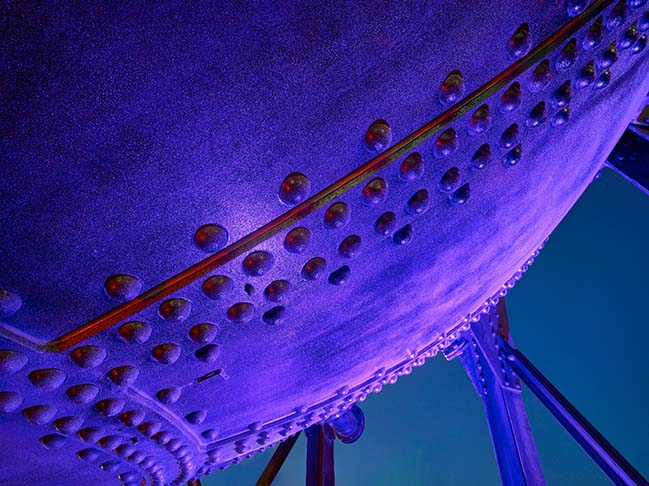 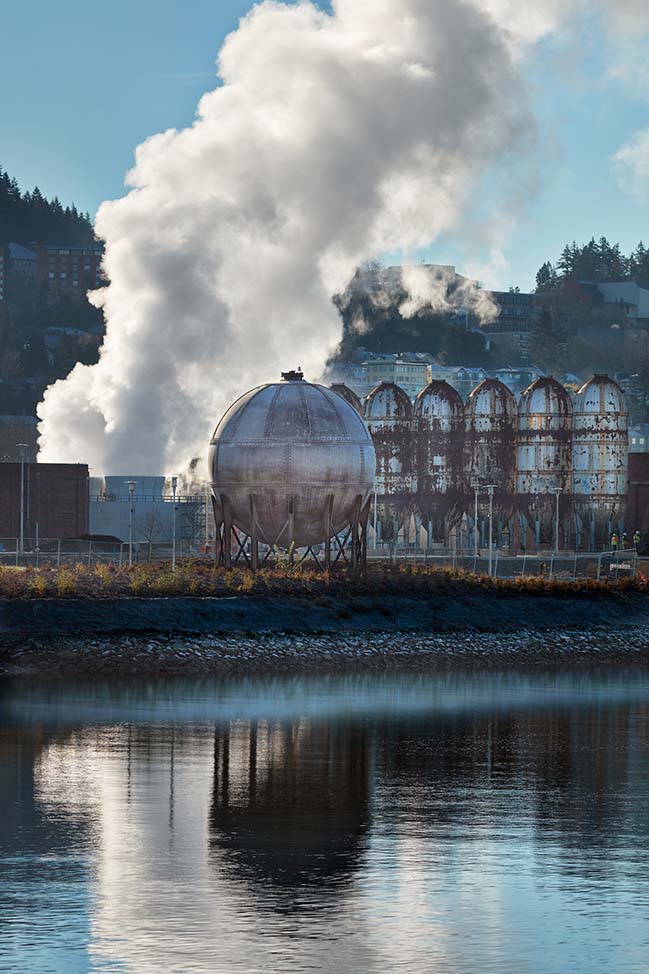 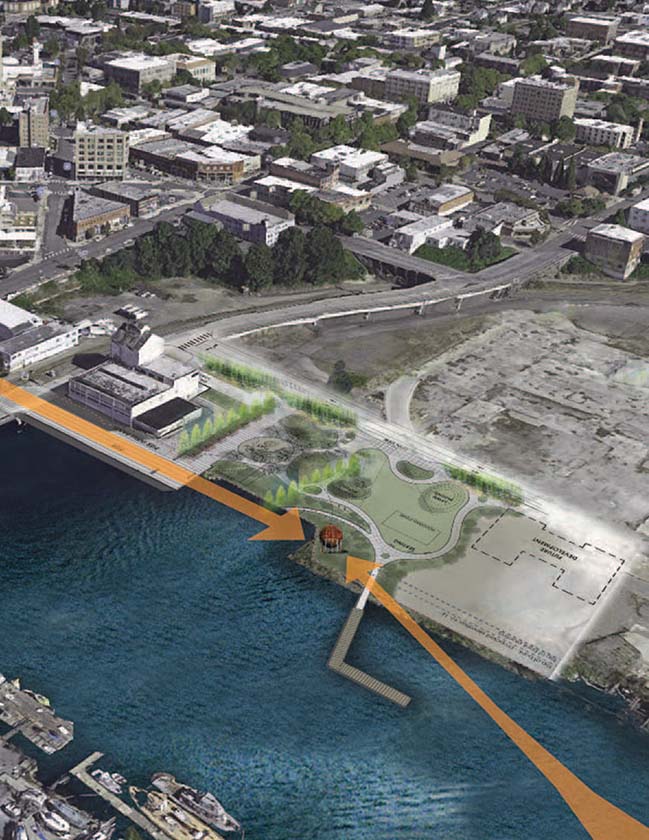 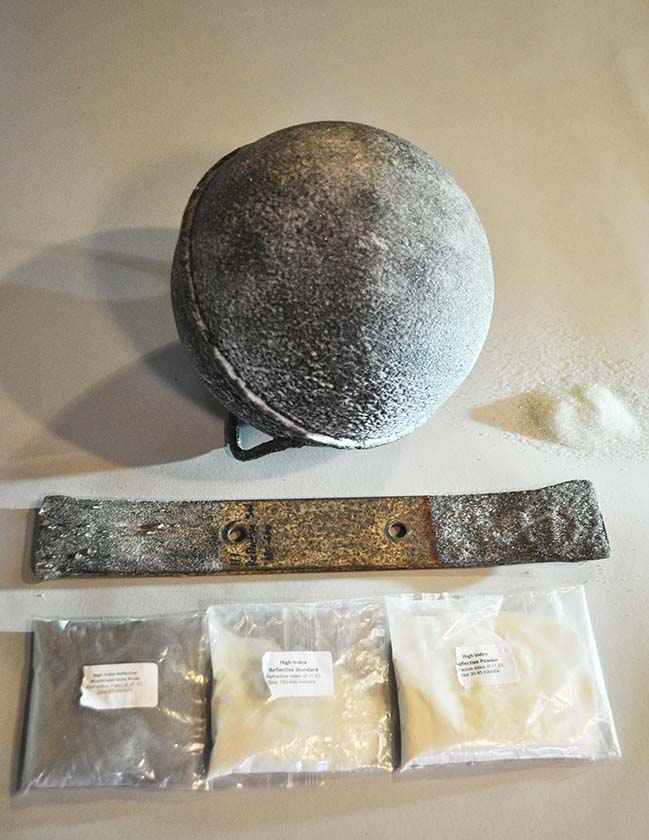 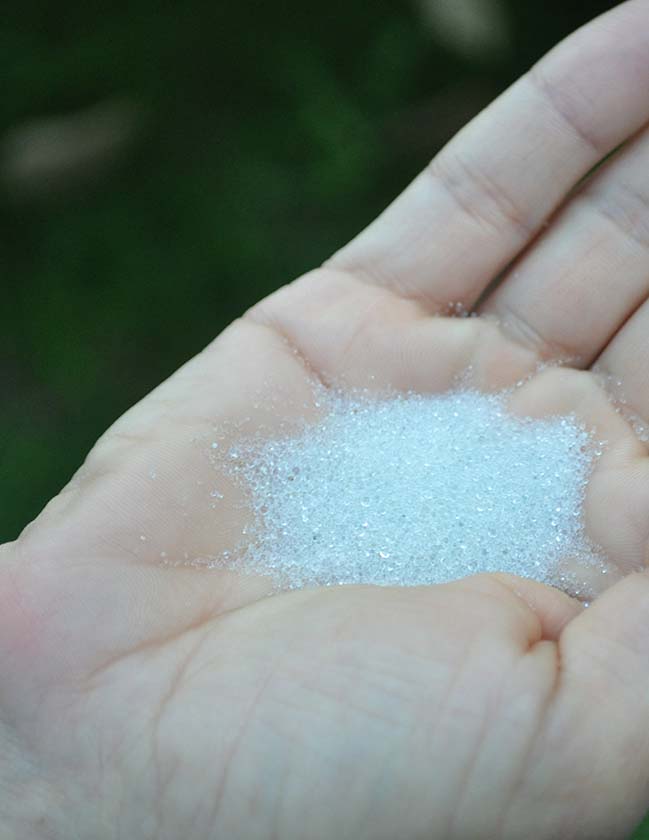 YOU MAY ALSO LIKE: Foster + Partners to design Mullin Automotive Park

08 / 20 / 2019 Located along Bellingham’s revitalized waterfront, the acid accumulator from the defunct Georgia Pacific tissue mill has been transformed into a new public art installation...