Bishopsgate House is a luxury villa in the heart of Singapore that has elegant modern style and was surrounded by green nature. The villa was designed by WOW Architects. 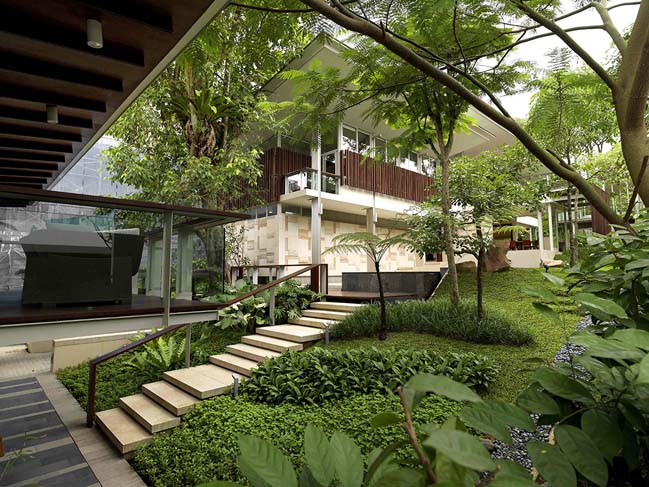 From the architects: This house was developed in the spirit of its original landscape, a rare heritage site in the heart of Singapore surrounded by mature trees amidst untouched swathes of secondary forest. Based on stringent principles of sustainability, the design celebrates the undulations on a parcel of land amidst hills and giant trees, along with its birds, trees, soil and bedrock. Many mature trees were protected, and a garden nurtured to grow from seeds dropped by resident birds in preparation for an organic progression to the next generation of native trees. The characters of each space, of the light, ventilation, and of views seen from and into the living spaces were crafted around the owners’ lifestyle. 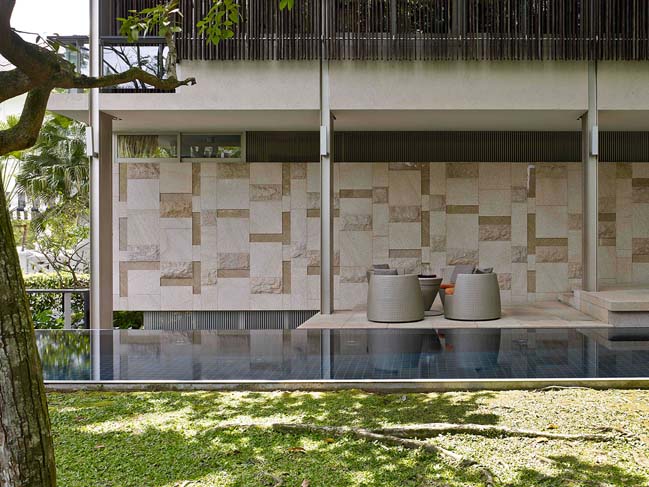 Existing ground levels and contours were respected through minimal excavation and materials and articulation were derived from the site. A gently stepping series of platforms work their way from the bottom to the top of the site covering an eleven-meter change in grade. In doing so, cutting and filling of the land was minimized. 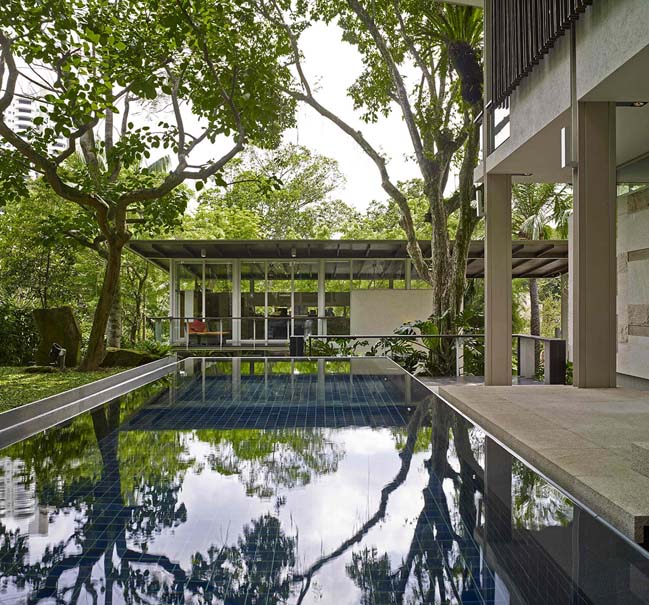 From the main building, a dining pavilion protrudes into the garden with a large roof deck overlooking the garden, pool and green view in the distance. An annex with a guest suite and study loft positioned at the lower end of the sloping site overlooks the long garden, and gives the feeling of a small presence in a big landscape as it is reflected on the dark swimming pool in the late afternoon. A third building, used as a yoga pavilion, was later added atop the highest point overlooking the entire ensemble. 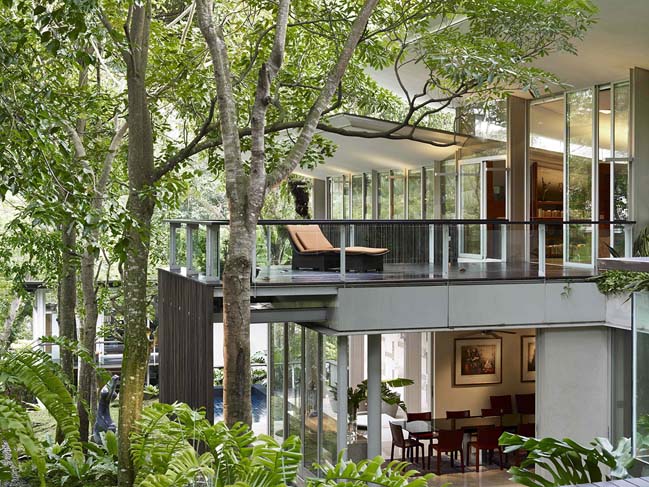 The building integrates architectural and landscape elements into passive environmental control features to reduce the need for air conditioning. Deep overhanging and cantilevered roofs and tall forest canopy trees create a shade structure, limiting direct solar exposure on various surfaces and the ground plane, as well as maximising natural ventilation which is enhanced with ceiling fans in all rooms. A hardwood fence preserved from the original estate wraps around the façade as vertical louvers which cut out the direct early morning sun. 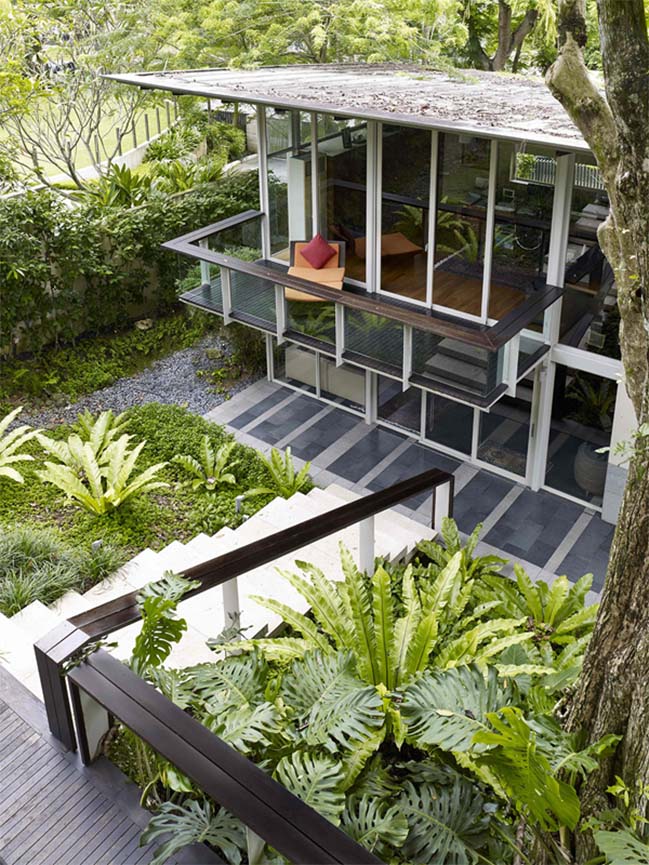 The roof is a dominant visual element scaled in proportion to the forested landscape into which the garden will mature. A lightweight inverted bow truss was employed to reduce the roof profile, cost and weight, which in turn reduced the size of the main column structure and superstructure of the building enabling it to sit lightly on the gentle contours of the site without a need for piling. The main house roof is angled to maximise solar panel exposure while shielding poolside terraces from sun in the afternoon. The roof’s curved underside ceiling frames the horizontality of greenery around the site while its large surface diffuses and reflects natural light, contributing to a gentle quality of light in and around the house to accommodate the owner’s avoidance of direct sunlight. 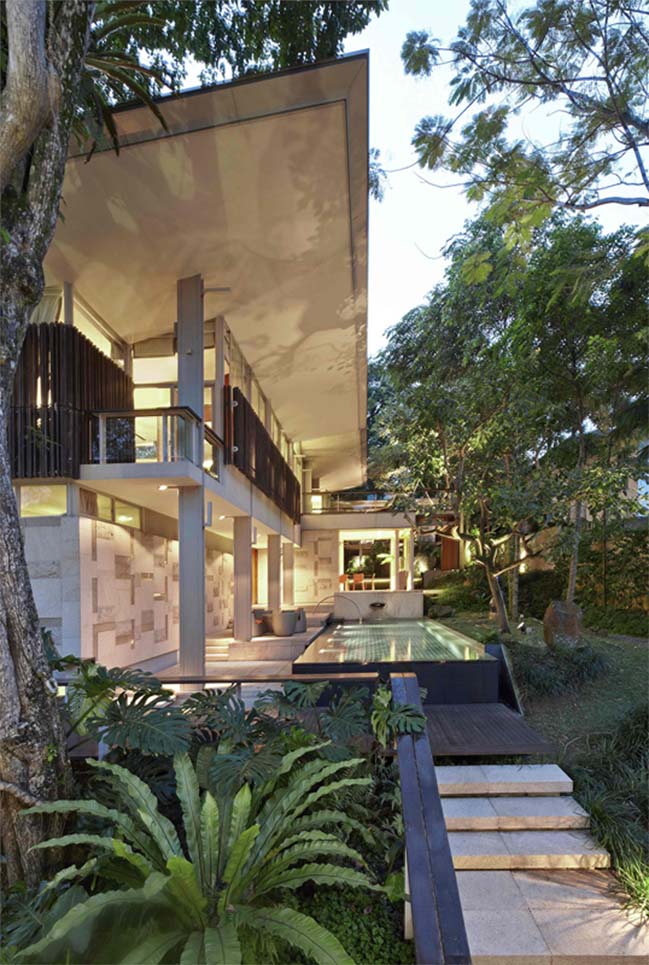 The large surface areas of the site and the roofs collect rainwater which is directed into a stone drainage swale and stored in a reservoir at the lower level of the landscape. Maximizing the use of abundant rainwater reduces irrigation and water needs for washing outdoor areas and cars. 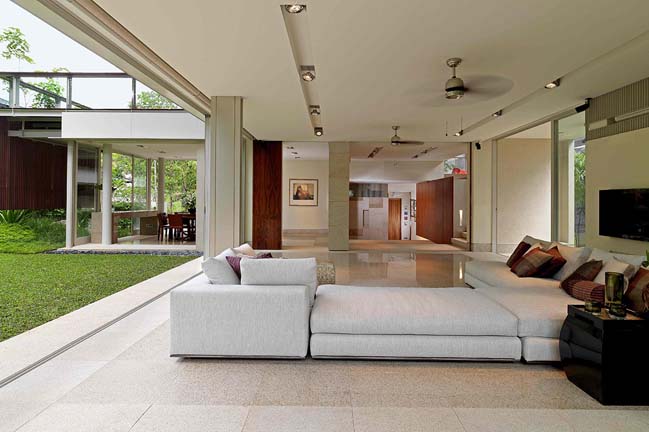 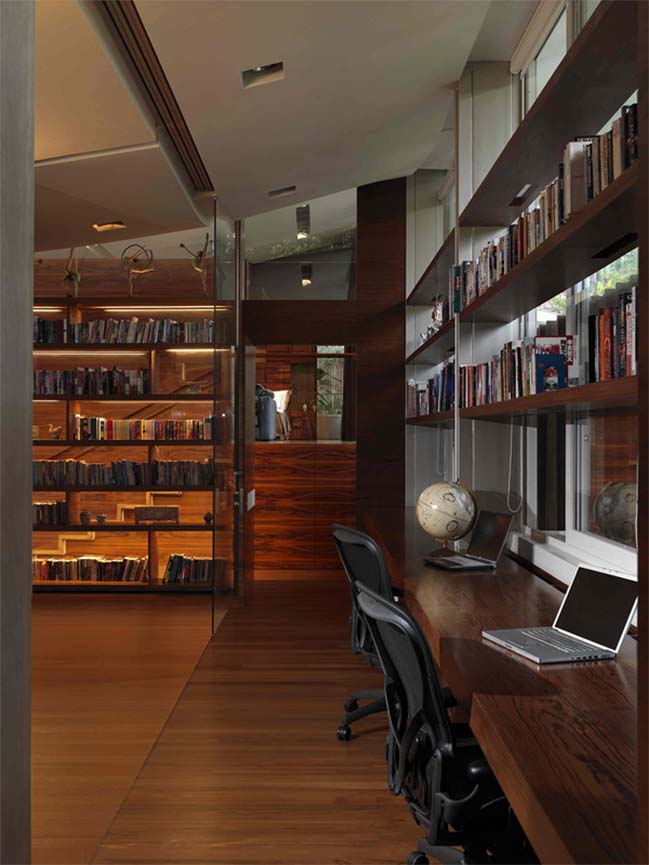 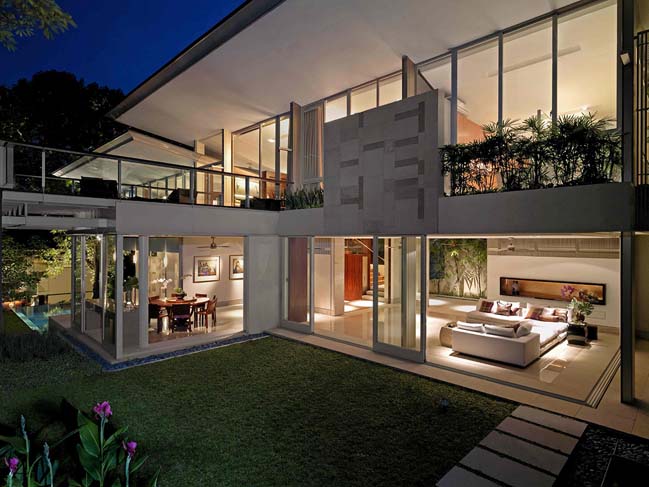 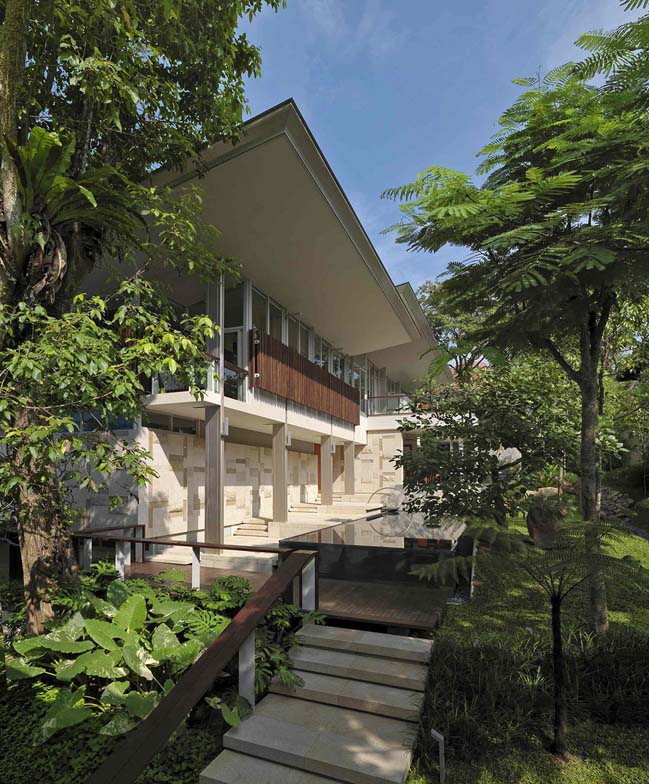 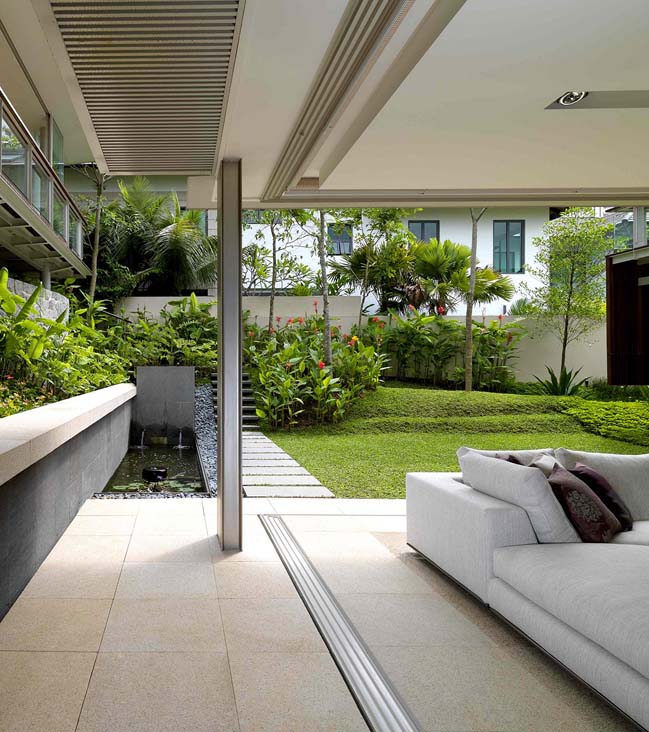 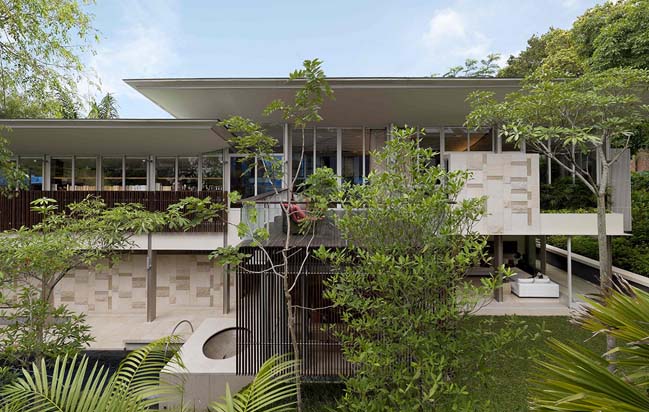 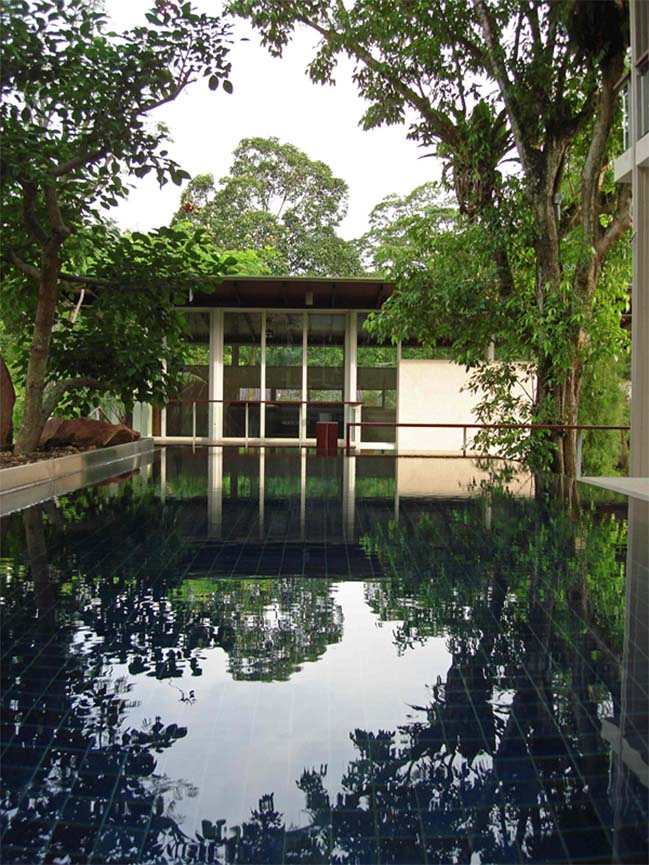 07 / 01 / 2015 Bishopsgate House is a luxury villa in the heart of Singapore that has elegant modern style and was surrounded by green nature... 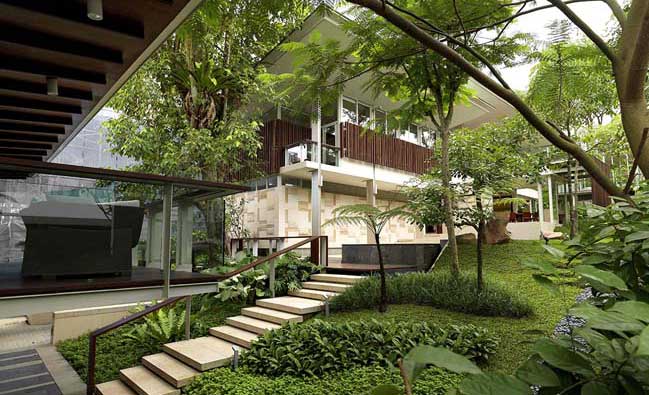