Completed by Luciano Kruk. Ecuestre House is located in Costa Esmeralda, 13 km north of the city of Pinamar and 4 hours away from the city of Buenos Aires. Its name makes reference to the stable and the two polo courses it is near to and, this area’s simple architecture has - maybe unconsciously - guided the concept of its design. 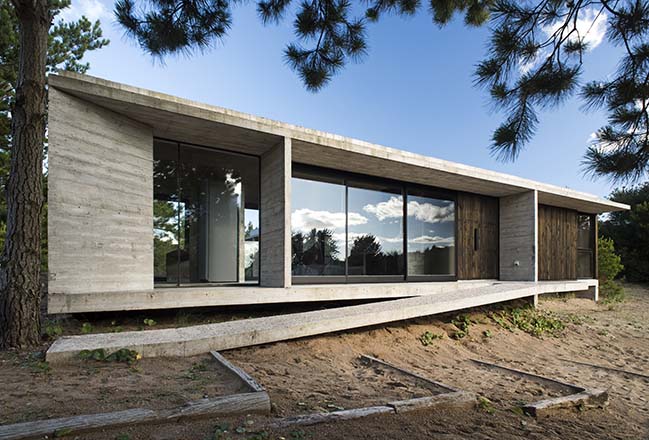 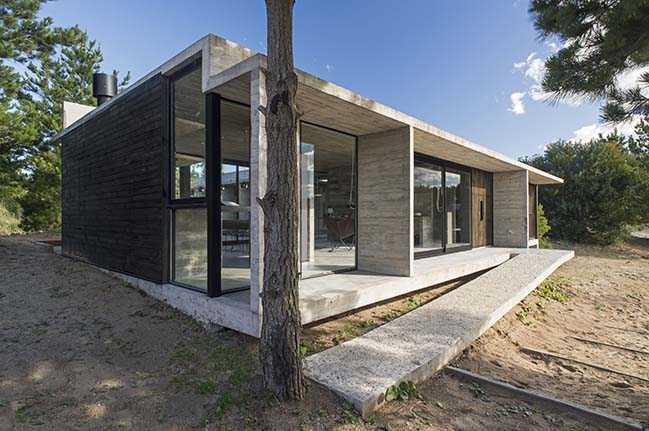 From the architect: The trapezoid-shaped terrain softly slopes upwards toward its middle, where the house stands on a thin podium. No interventions were made to its natural topography and, aiming at a continued connection with the forest it shares on the back with neighboring lots, most of the preexisting pine trees and acacias were kept. 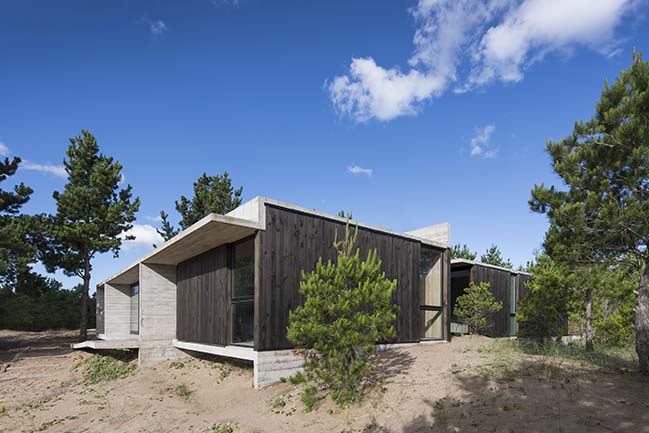 The clients, a couple with kids, commissioned a single storey 150 m2 house. It was requested that it should have 3 bedrooms, of which the master suite needed to be completely independent, equipped with a private bathroom and a yoga room. They also asked for the house to be built with as little cost as possible and in a short time. 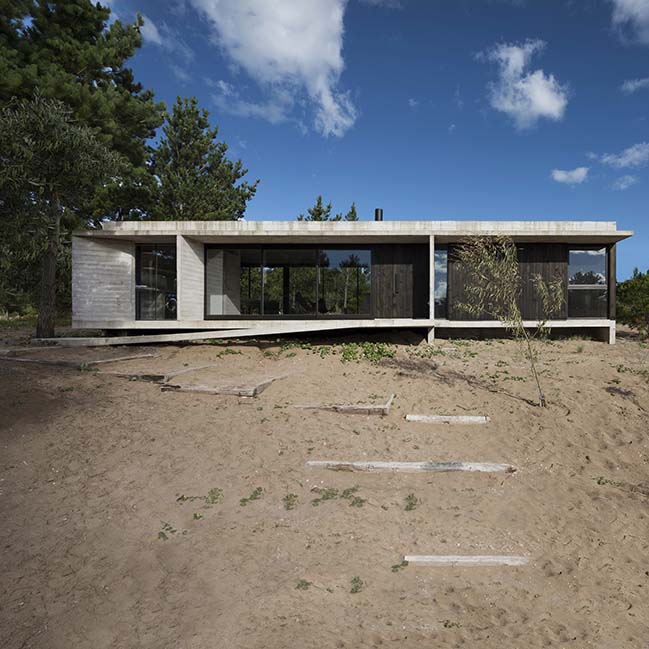 One of their conditions was that less concrete should be used, in comparison to other houses made by the Studio that they already knew. And we did exactly that. 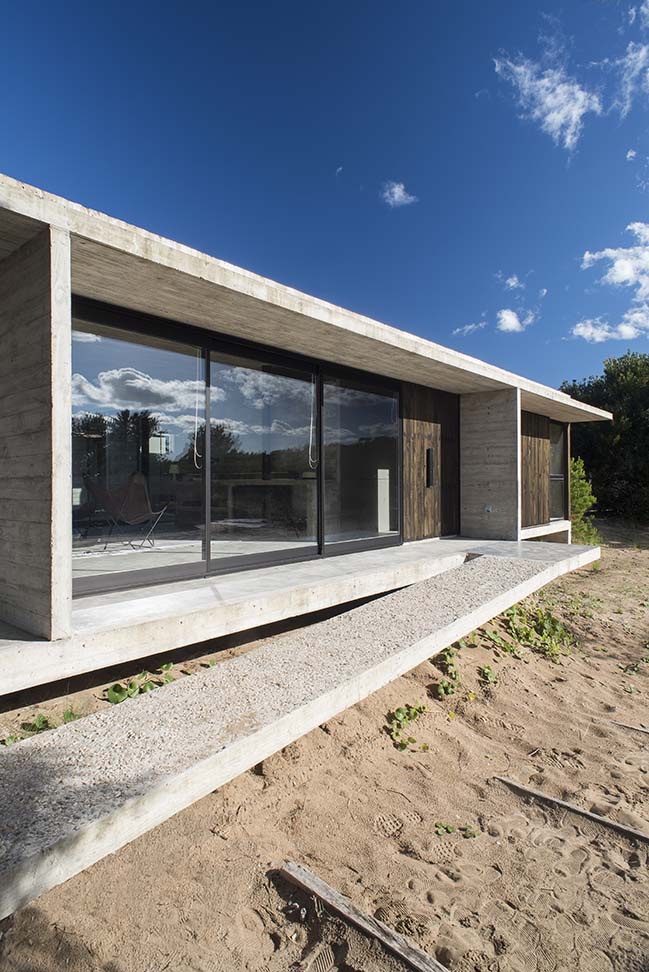 Two different construction systems were used in conjunction to build the house: a dry one and a wet one. While all inner walls were materialized with exposed concrete, in order to create the skin, the Studio chose a crystal envelope and a metal frame structure covered with wood of different kinds. One of the objectives behind this choice was to create a chromatic contrast between the inside and the outside. On the one hand, kiri wood was used for the former, and on the other, common pine wood treated with burnt oil was used for the latter. In this way, the darkened wood, along with the dark bronze anodized aluminum framings, would enhance the bright interior with its translucent crystals and light colored wood. 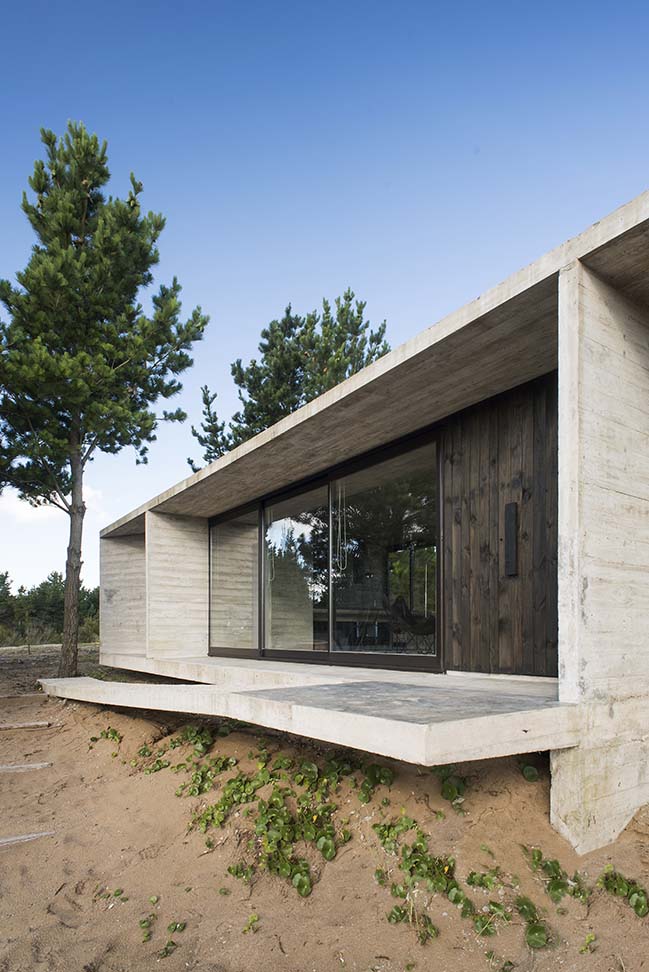 Au naturel quebracho wood decks were placed facing the woods. Being exposed to nature, it was not long before they acquired a weatherworn look, similar to that of the pine wood skin on the walls. Our goal was that the rustic and silent esthetics of the house intertwined with the wild surroundings without imposing and stealing Nature’s protagonism. 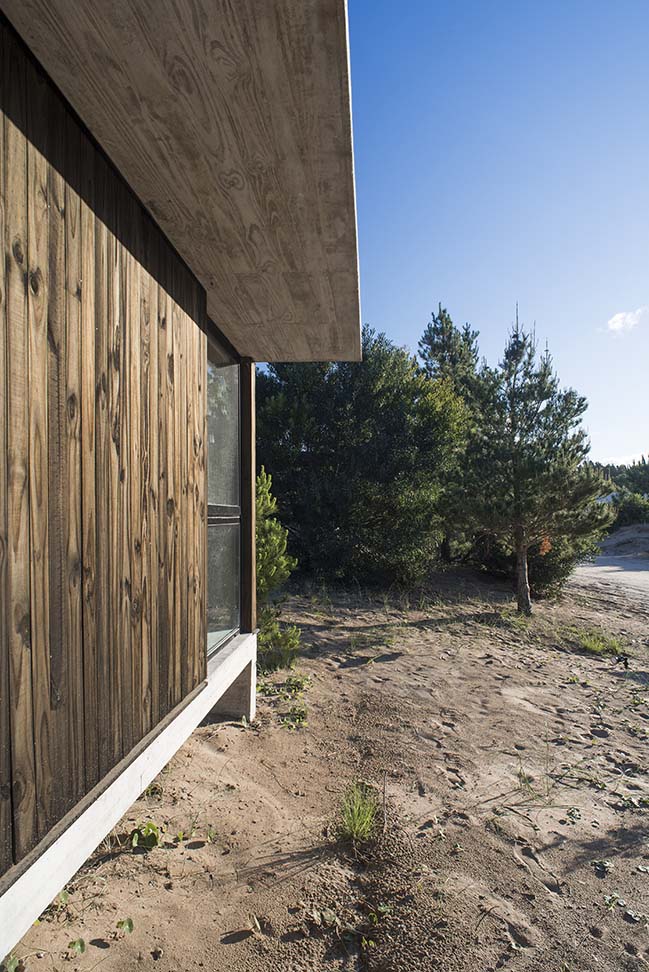 In order to comply with the request to grant independence to the master suite, the house was organized in two separate modules layed out in such a way that, connected through a circulatory space, draw an “L” shaped floor plan. This disposition allowed the trees on the lot to maintain their relationship with the pine forest at the back and hence grant the terrain with fluidity and a greater green space. 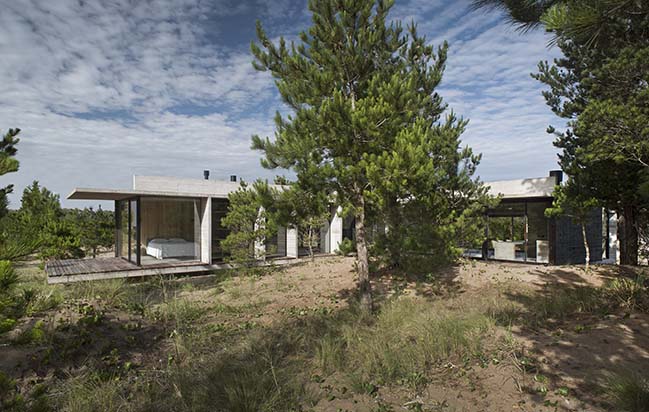 As for the skin of the house, in an attempt to gain privacy from neighboring houses, while the dark wooden panels were set on its sides, translucent panes on the back and the front allowed the house to open up and expand. In this way, the social area, with its glazed limits, would present itself as a crossed-views gallery. Taking the whole of the house’s width, the back panels would generate a complete unification with the open air decks.

The soft elevation of the house, in addition to the single acacia in front of the entrance, granted intimacy from the street to the common area without diminishing its visuals. On the suite’s side looking at the open space produced by the “L” shaped floor plan, blind concrete walls were disposed in order to block visuals from the social area, while preserving its direct link to the outside space. 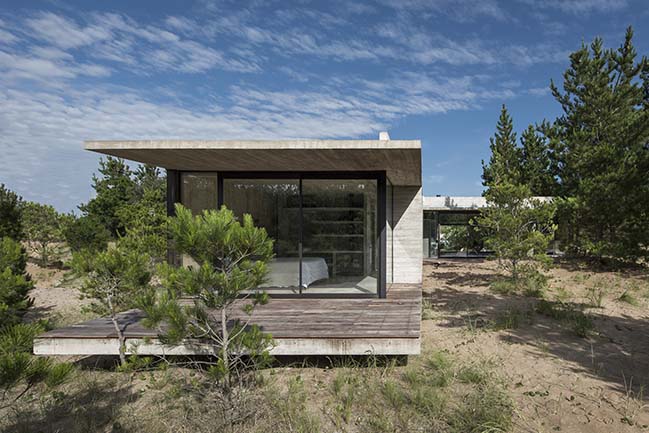 In the center, the front bar is illuminated through a skylight on the roof, which apart from allowing the entrance of the sunrays, allows for air circulation in the bathroom. The rest of the house has natural lighting and ventilation. The house is equipped with radiant floors, air conditioning, and two stoves as heating systems. 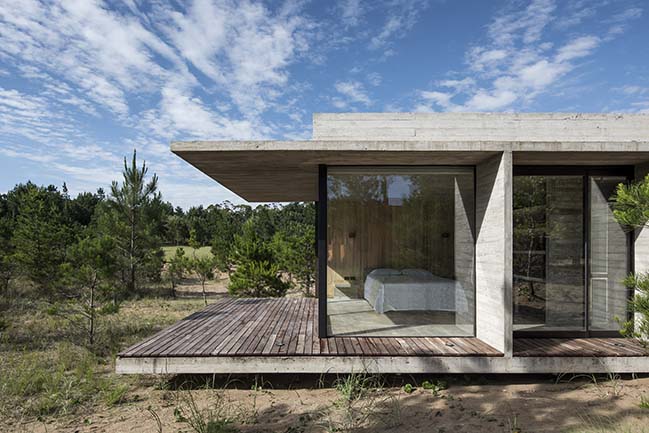 The inner furniture—such as the dining room table, the kitchen counter, the wardrobe shelves and the night stands— was completely materialized with smooth concrete, thus constituting durable and low maintenance fixed equipment. Both flooring and roofing make part of the concrete construction system. 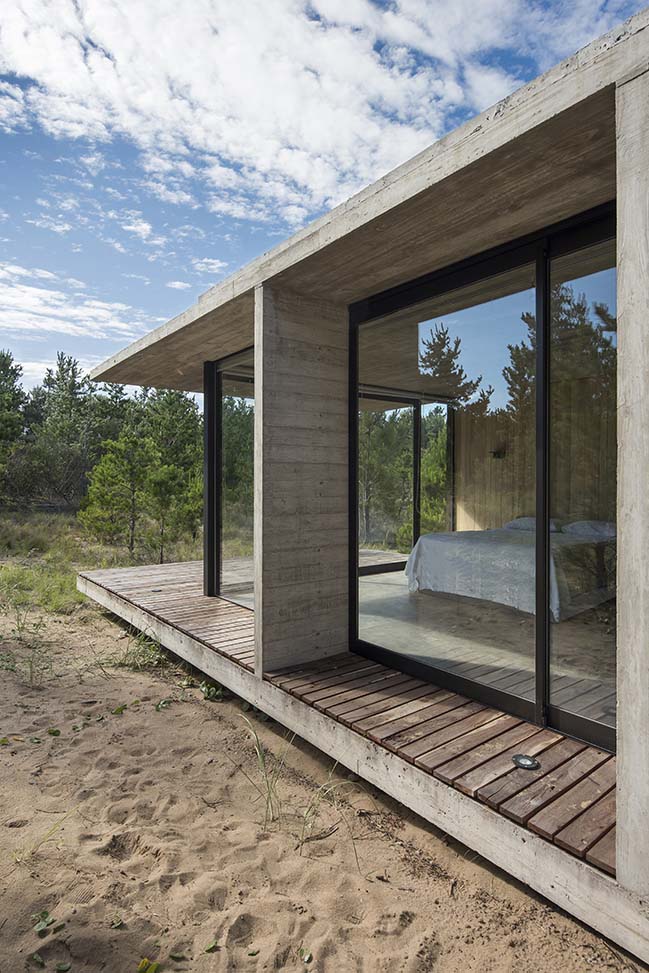 A hard nucleus at the center of a soft shell. A dark outside sheltering a clear bright inside. A chest hidden from the built surroundings, but open to the earth, the sun and the forest. Just what our clients asked for: a house bound to enhance their senses while allowing them to live the energy of the calm natural scenario. 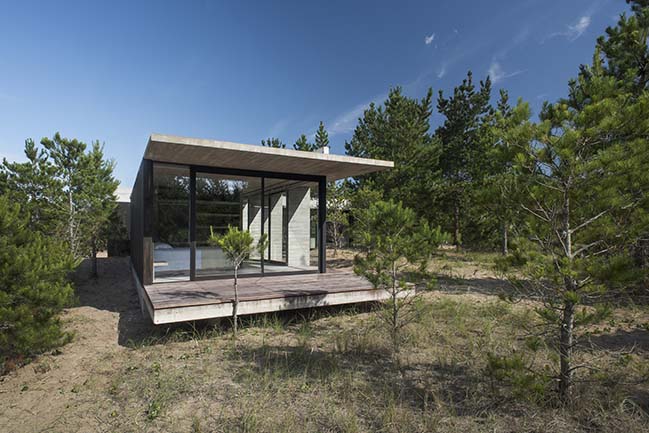 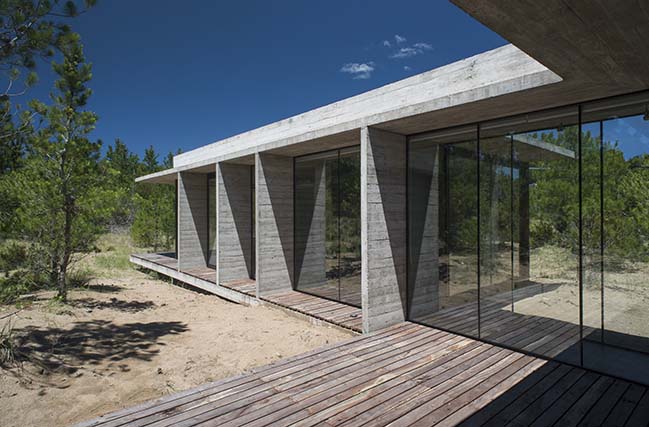 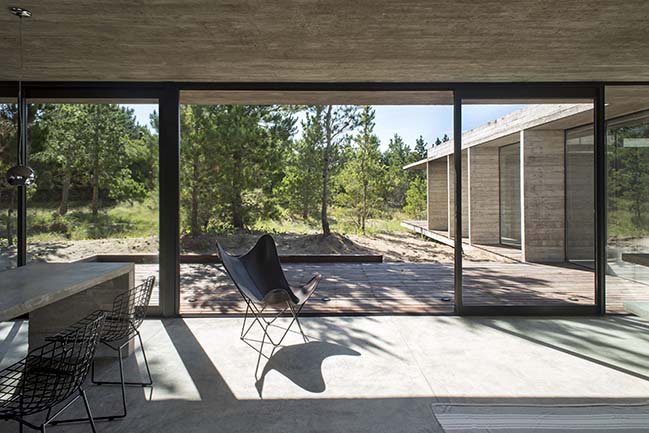 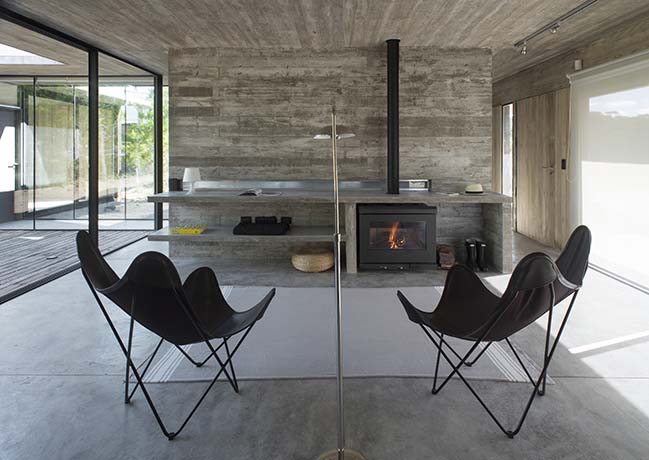 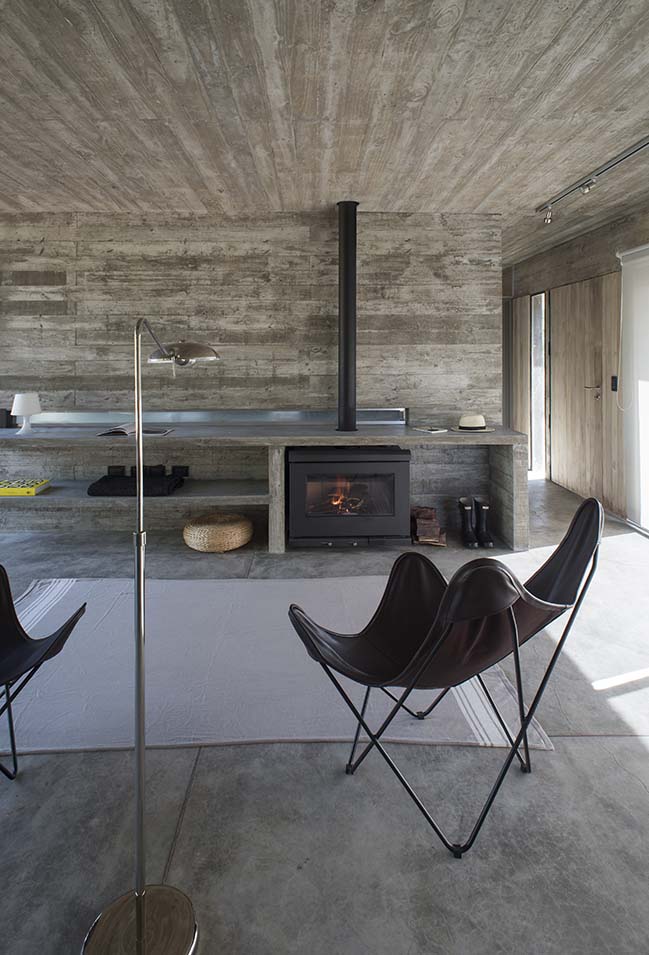 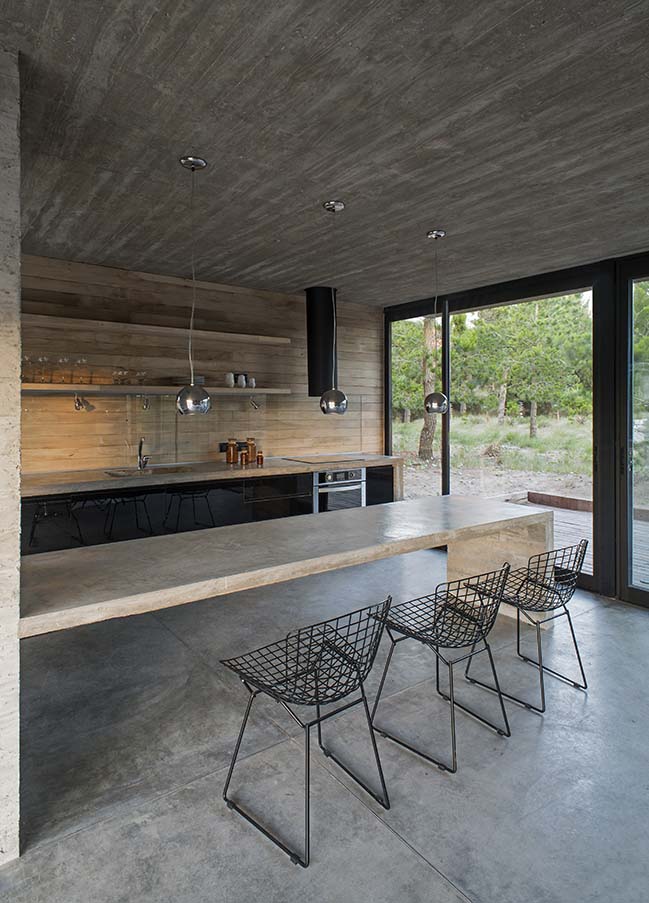 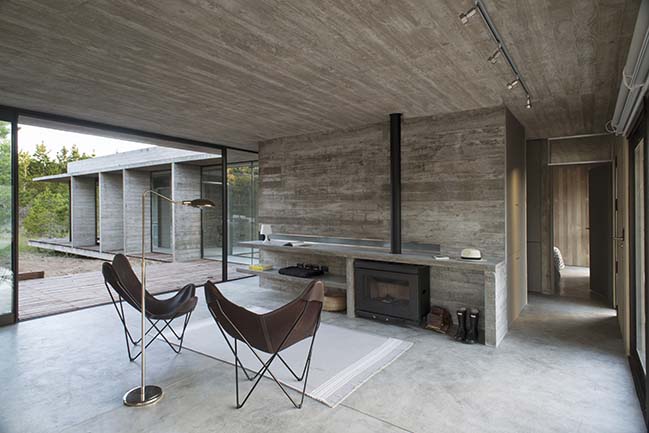 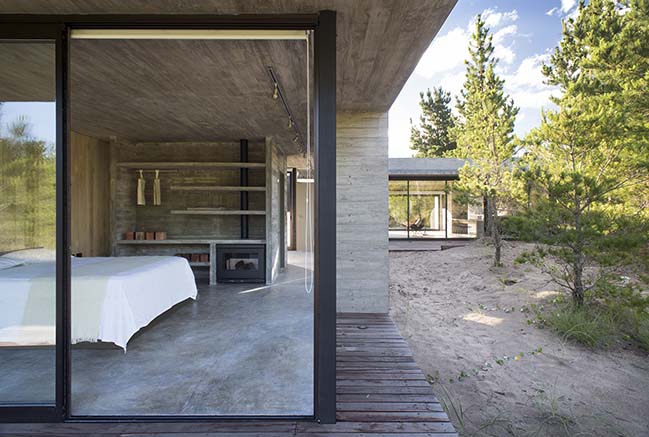 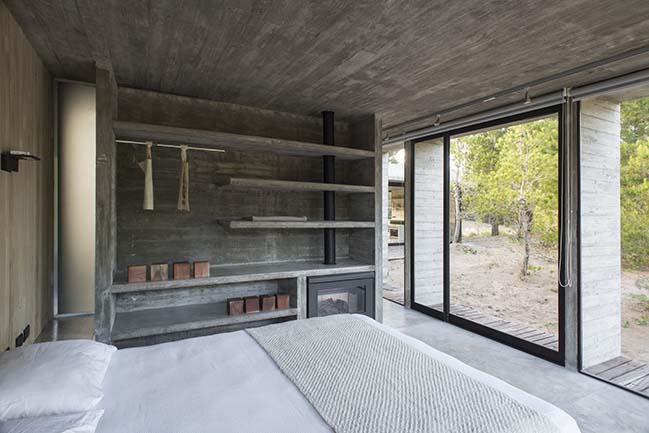 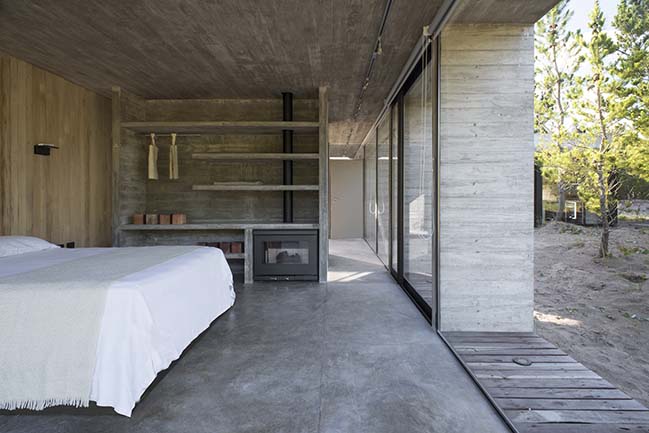 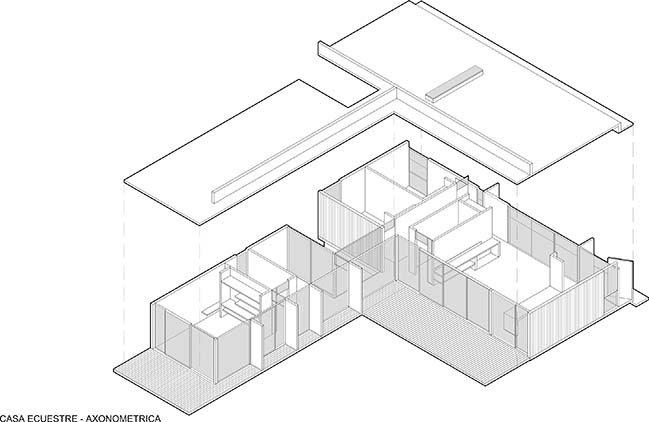 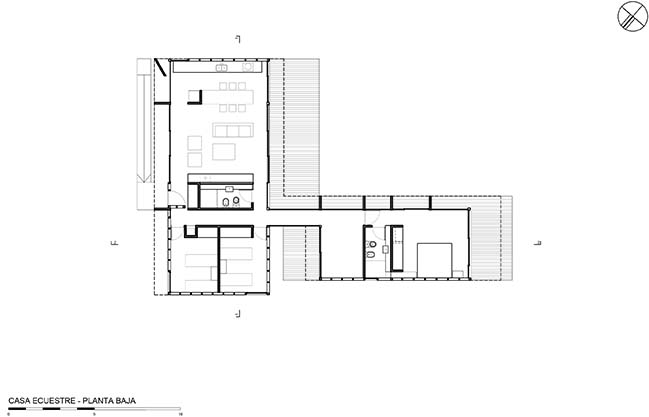 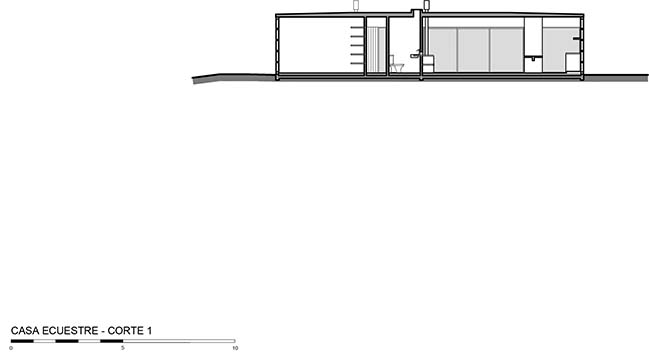 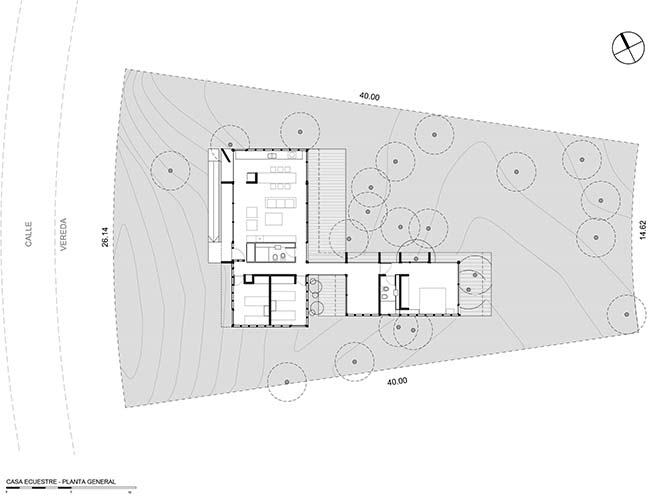