The land is situated in Cerdanya’s area, in an old settlement where rehabilitation began 15 years ago. Currently it consists of 5 houses. The plot is surrounded by a privileged natural environment with astonishing views of valley and the mountain range of the Cadí natural park. 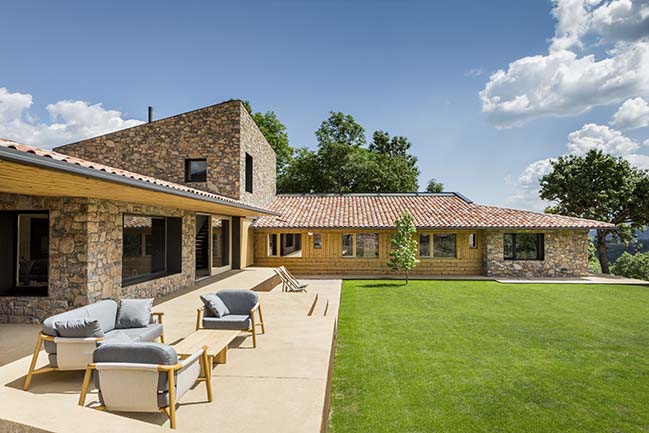 From the architect: The project is constrained by strict construction regulations that govern the region and that gear the project towards the use of ‘traditional Cerdanya’ exterior materials. The ‘ceretan’ home seeks integration with its context and amongst the surrounding existing constructions by means of using materials and basic elements of the local construction. Therefore, any construction should use locally sourced stone for the walls and artisanal clay tiles for the sloping roofs. It should incorporate as well the ‘era’ or garden, the porches and the access through the ‘ceretan’ gate. The challenge was set: to build a home that will marry harmoniously very traditional elements, with a contemporary and cozy atmosphere. 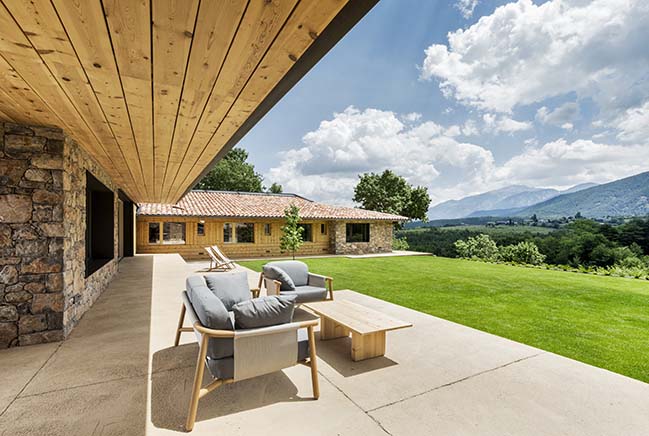 As a start, we decided to build the home with a wooden structure, facing the project from a bioclimatic strategy, to achieve an efficient and sustainable construction. Thanks to this system we managed to reduce the construction waste materials. 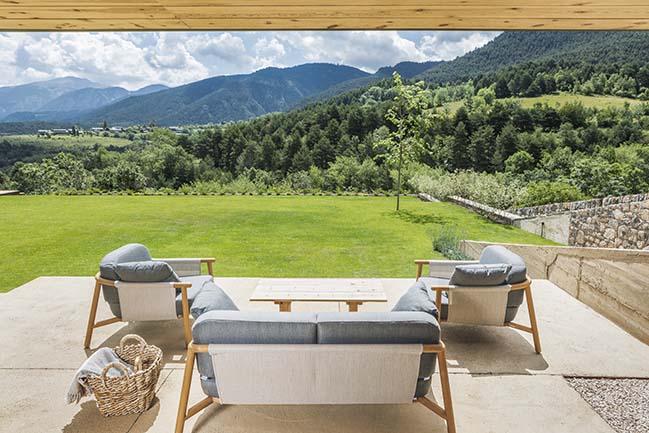 Hence the project included 3 different materials: the stone and the clay tiles as stated in the regulations and the timber as structural material. This set us up to try and resolve all the design elements with these 3 materials. Later, we added iron to the material triad in order to resolve some joints and encounters and to design luminaires adding cohesiveness and singularity to the details of the interior. 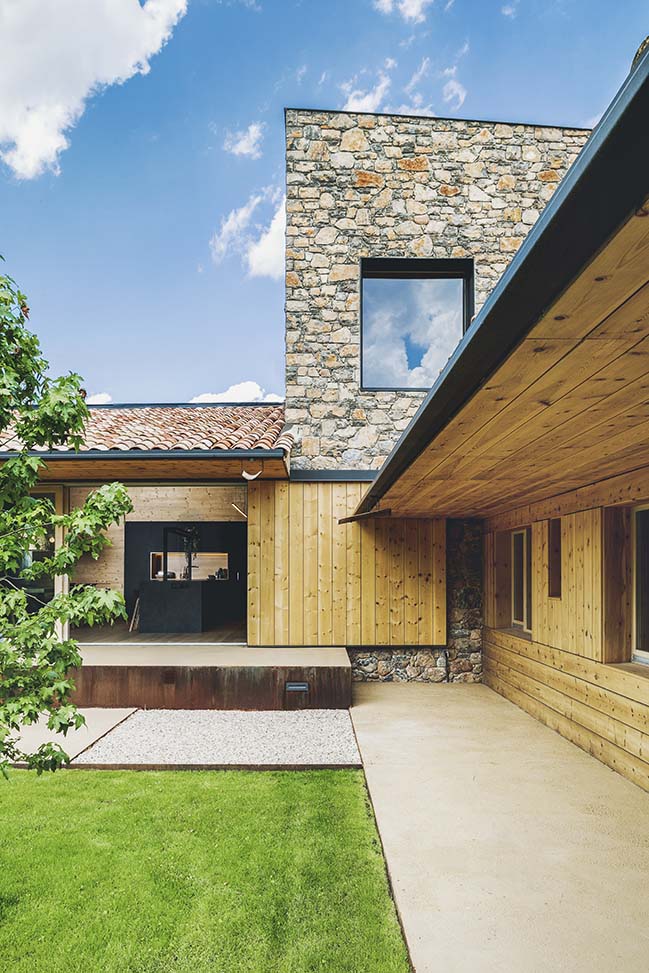 A steep slope of the 20% characterizes the site, running down from the street level. We intended to set out the whole house in one story and in level with the ‘era’ in order to enjoy it as much as possible.  Therefore, we proposed to make only the garage and the access hall at street level and the rest of the house sits 2.6mts below that level. This decision entailed to bury part of the house fitting it into the topography. 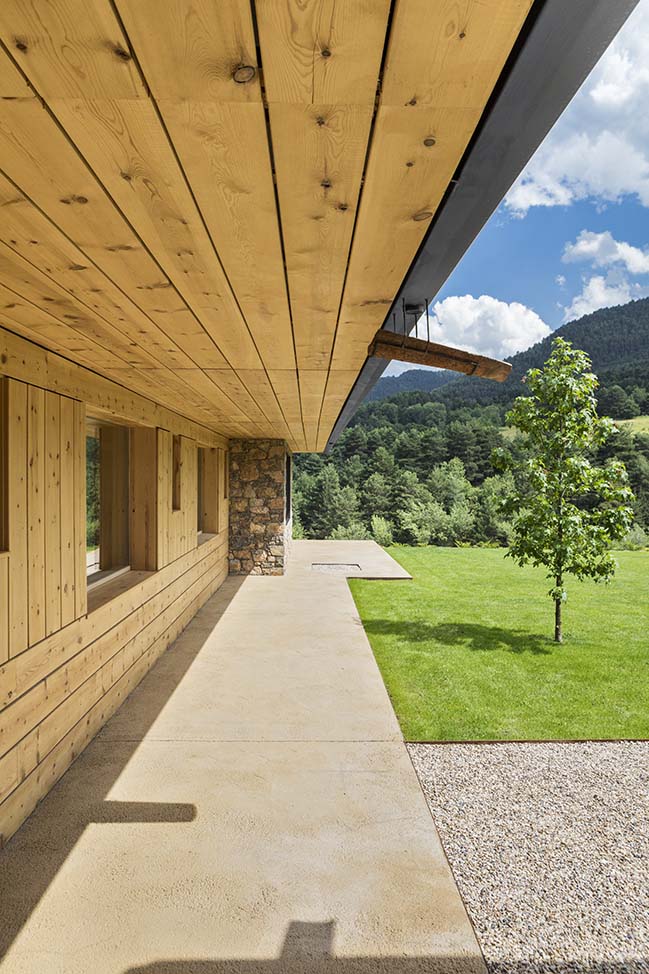 The plot has a quasi squared shape oriented towards the south-east.  This feature allows us to easily create an L-shaped plan with two perpendicular wings.  Those rest on the plot’s boundaries and create the day area with the main rooms and the night area with the bedrooms. 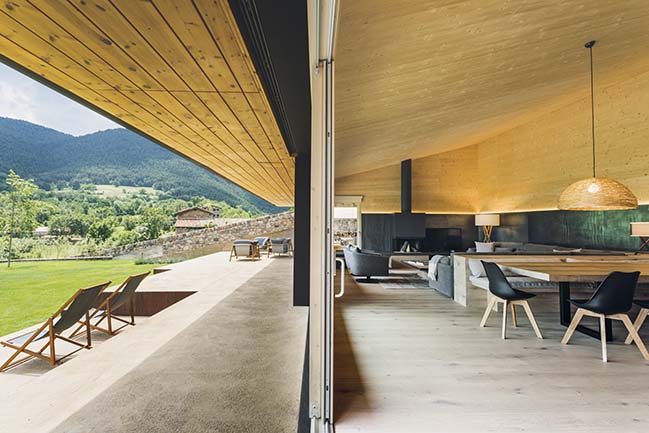 The stone wall slightly protrudes above the roofs and highlights the simple shapes guided by the plot’s shape. The wall draws a series of slopes and counter slopes providing the house with a singular geometry. The roofs of both wings converge towards the ‘era’ creating continuous porch that surrounds the house and generates a wide lounge area in one of its ends. Connecting both the night and the day wings is a two-story volume, the only one whose slope is oriented towards the exterior, creating in such a way an access porch. 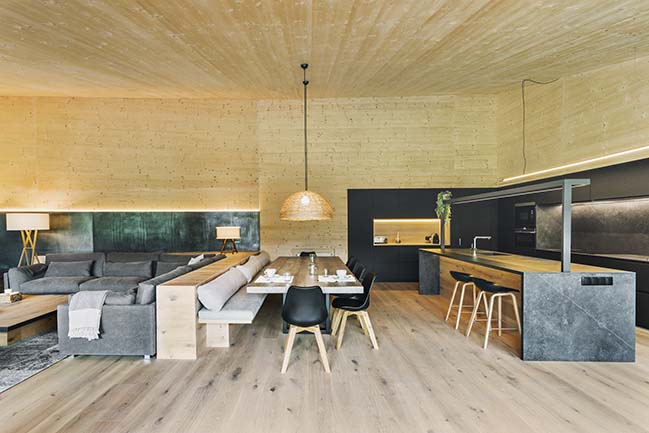 The exterior elevation is continuous and made in stone in its totality except from two instances where the wall sets back: at the bedroom’s area and at the porch. When these gestures take place, the walls appear cladded in wood as to show the relevance of the wood as main construction material that emerges once the stone is eliminated. The same happens in the access volume at street level, where the setback is cladded in wood in contrast to the stone volume. 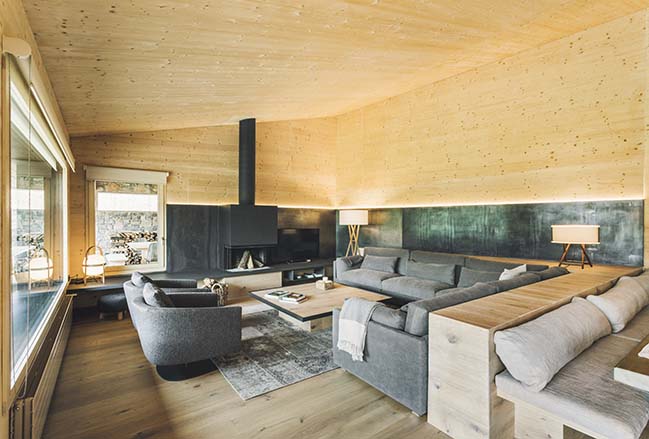 In the traditional rural architecture of the region, the houses where enclosed towards the exterior in a gesture of protection, their occupants didn’t need to see the areas where they had been working all day. This project imitates those gestures closing itself towards the street and the immediate neighbour on the north face. Nevertheless, it aims on the contrary to open up to the ‘era’, the garden and the views. In this manner any of the interior and exterior areas can enjoy the natural landscape that surround the house. 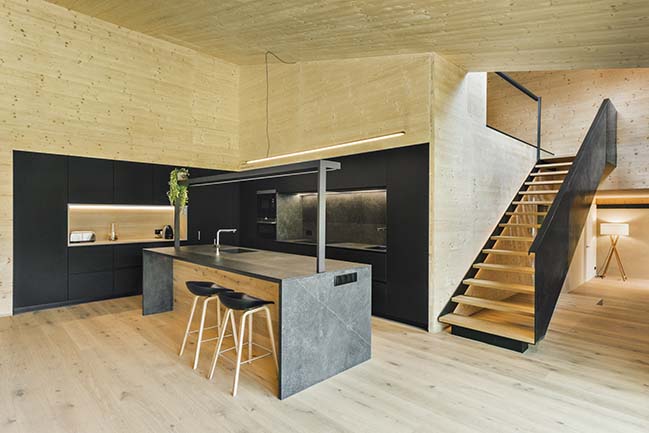 The primitive as well as traditional act of gathering around the fire, as moment of family togetherness, was central concept to the design. The wide, open space of the ‘day area’ goes on to generate smaller semi-enclosed corners through the use of the furniture, enfolding the spaces to create cozy atmospheres typical of the mountains.  The couch that frames the fireplace, the bench, the table, the kitchen isle, set out the rhythm of the diverse spaces within a visually continuous space. 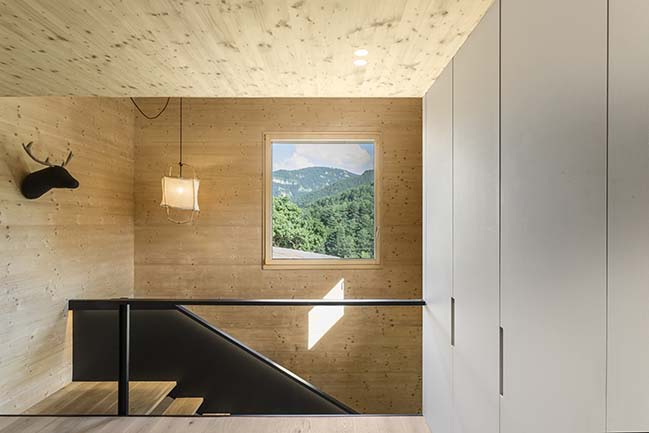 Distribution: The access to the house on foot is at the street level, 2.6 meters above the residence. Once inside the access hall, we find a windbreaker, typical element from la Cerdanya. The large sliding door allows us by opening it to enlarge the access hall or to diminish the heat loss by closing it during the winter months. At the end of the hall towards the stairs to the main floor, a window frames the views of the valley. Going down the stairs another window frames the mountains of the Cadí natural park. 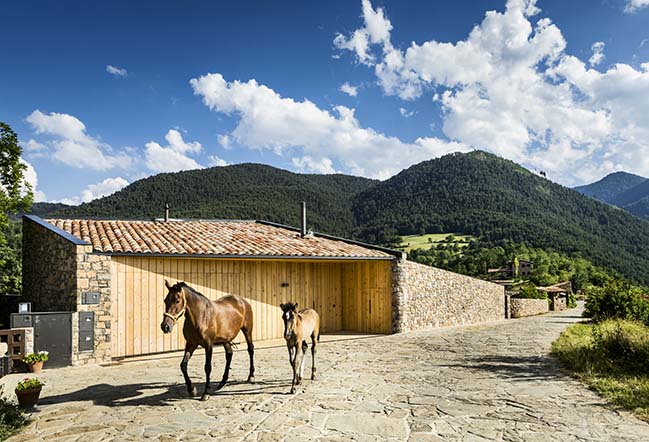 The main floor, the lower ground, is in L shape and is formed by 2 clearly differentiated wings: the day wing completely open and facing south-east, and the night wing, more compartmentalized and oriented south-west. There is a 55cm difference in level between the two wings to adapt the project to the site’s slope. 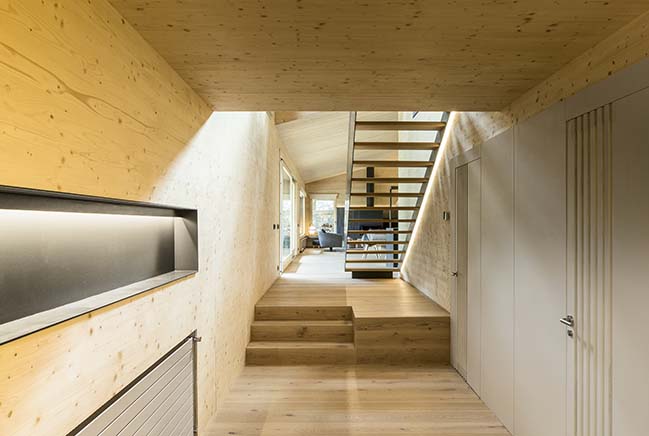 The corridor to access the bedrooms, is a narrow and tall space where a large and long skylight is placed along its ceiling providing the otherwise residual space with lively natural light. The corridor wall is made with natural clays, that help us to control de interior humidity. 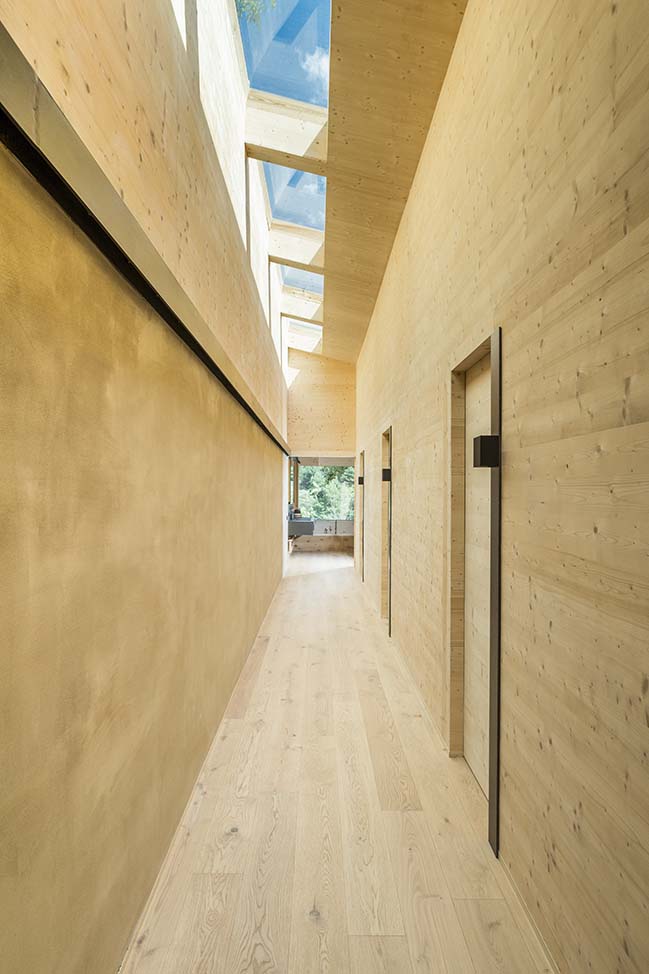 Three identical bedrooms are designed, planned for the three kids in the family. Nevertheless, currently two of those rooms are unified to generate a bigger room. This is intended that now that they are still young and can sleep together, this design move will allow creating a great play area. The other room is used as guest room and at the end of the wing the master bedroom is placed. 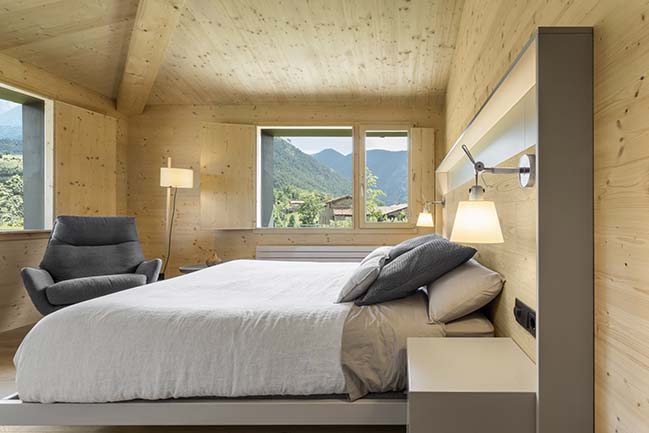 The restrooms are incorporated into the bedrooms, with the shower and WC enclosed and the rest open. Being them placed towards the exterior walls, the enclosed spaces have natural lighting and ventilation. Moreover, nice views of the mountains can be seen from the shower.

In the master bedroom the same logic was followed, incorporating a bathtub and a lower window besides it to enjoy the views while taking a bath. 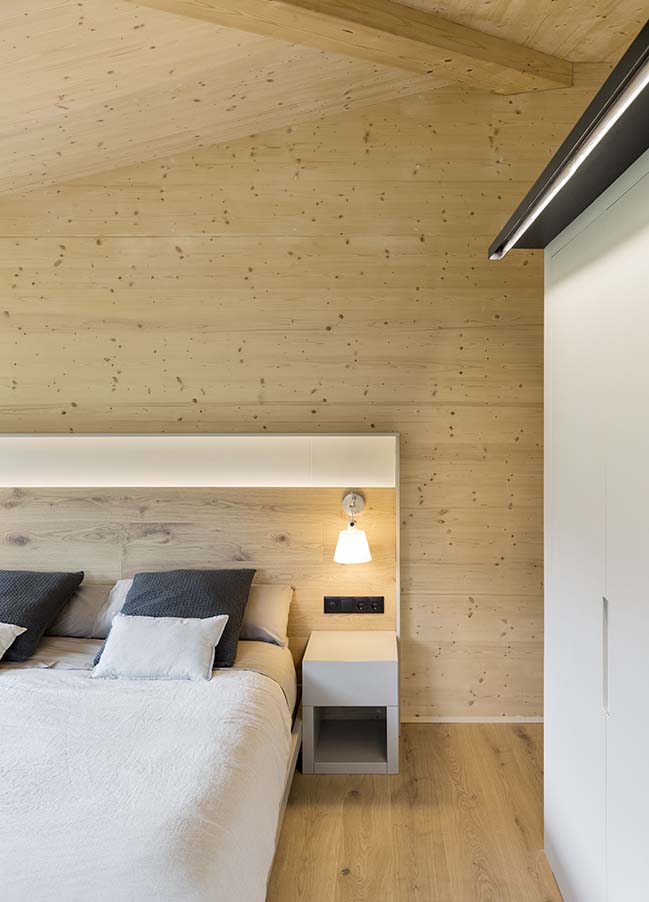 The timber structure and the isolation of the volume pushed the design to rethink about hermetic enclosure, transpiration and air renovation. We accomplished that by a double flow heat recovery system. This system allows the house to ‘breathe’ and guarantees the continuous interior air salubrity. 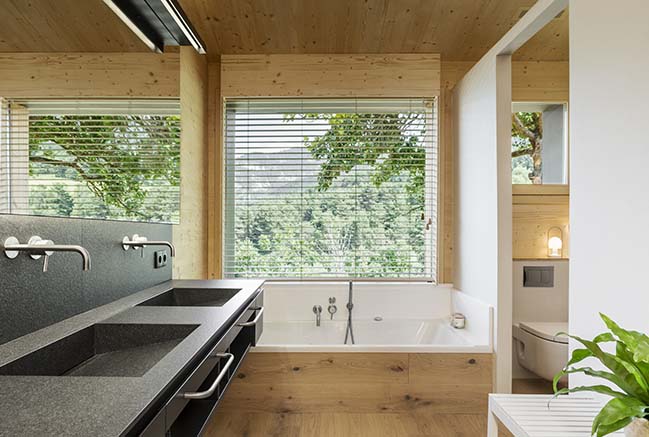 The wood is the main character throughout the house interiors. Fir planks clad walls and ceilings and natural oak floating parquet covers the floors, all with the same tones. The window and door frames are in pie wood with mat finish and the interior cupboards, closets, doors and the outside blinds are painted with an ecological and ‘breathable’ paint. 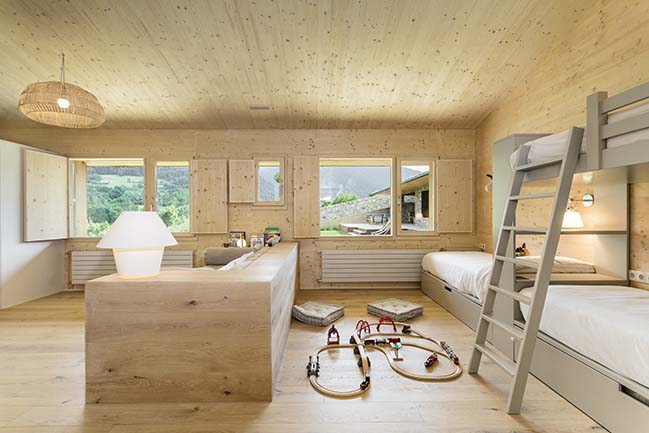 The walls’ and roofs’ structure is in pinewood. Therefore, by means of one material treated in different ways we resolve most of the interior elements and finishes.  The exterior wood is treated larch. The rest of the materials are the above-mentioned stone and clay tiles, as well as iron as a polyvalent material.  Iron is used in the exteriors as window frame and as roof gutter and in the interiors for some details such as lighting fixtures, the fireplace, stairs, and other finishes. Reinforced concrete is only used for the retaining walls and foundations. 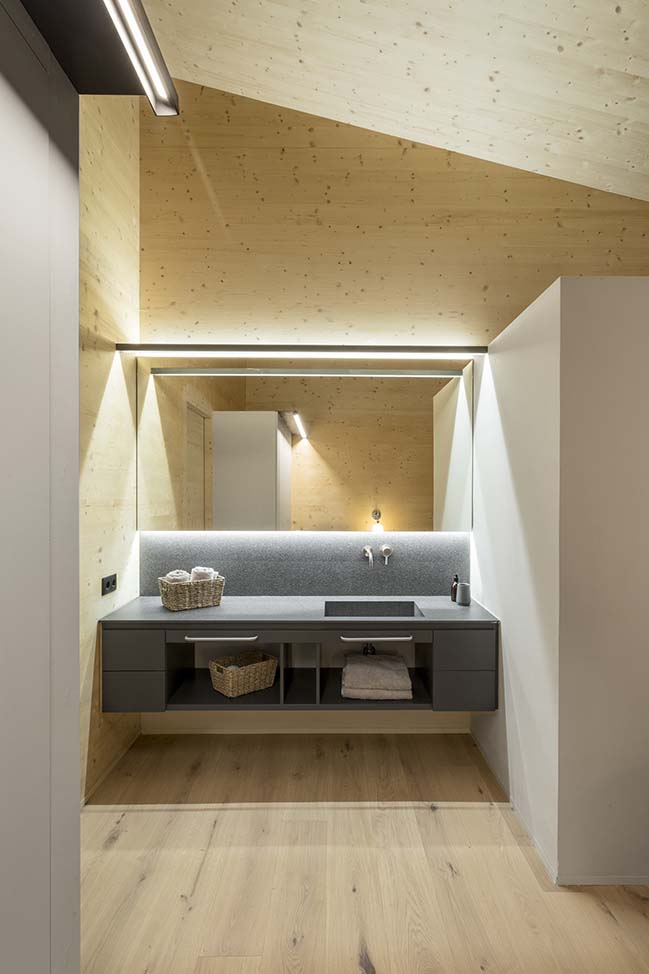 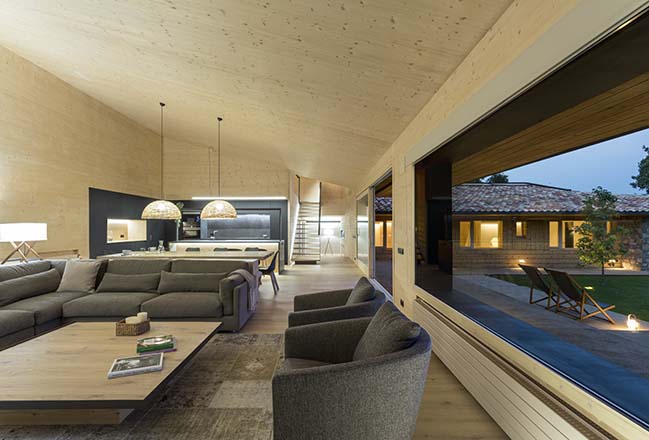 > You may also like: Soriano House by Beyt Architects and Bac Estudio de Arquitectura 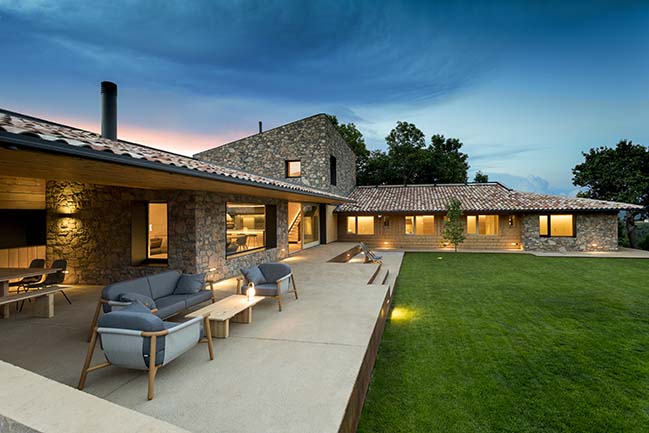 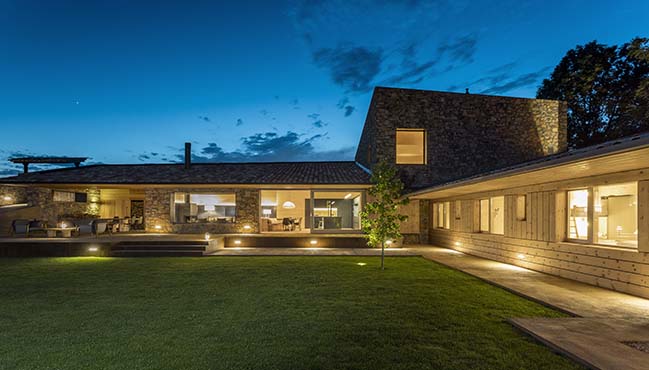 > You may also like: House in Rubielos de Mora by Ramón Esteve Estudio 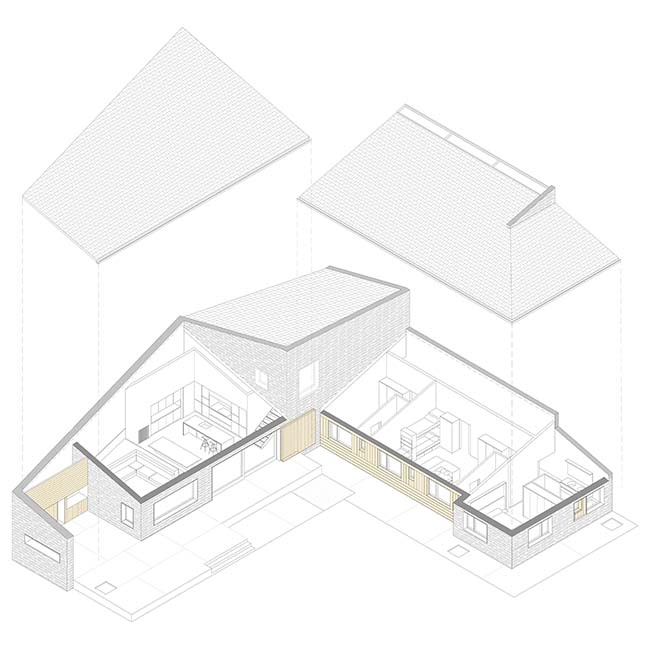 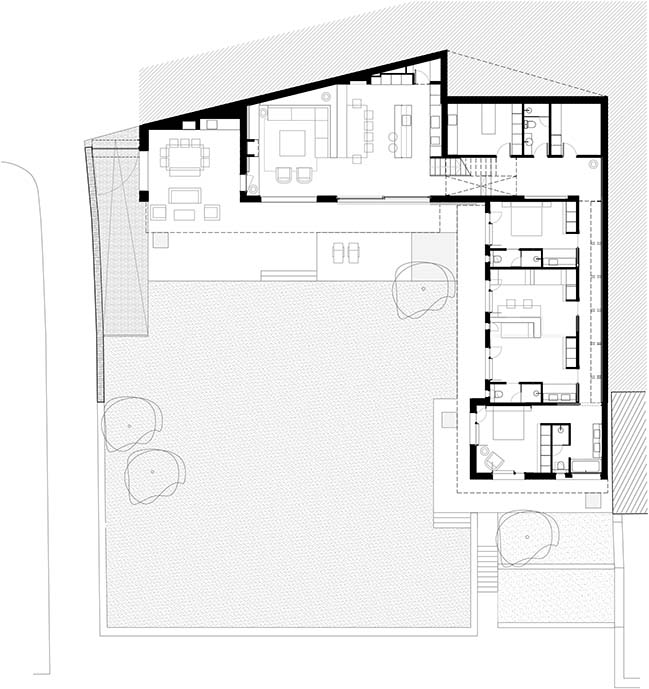 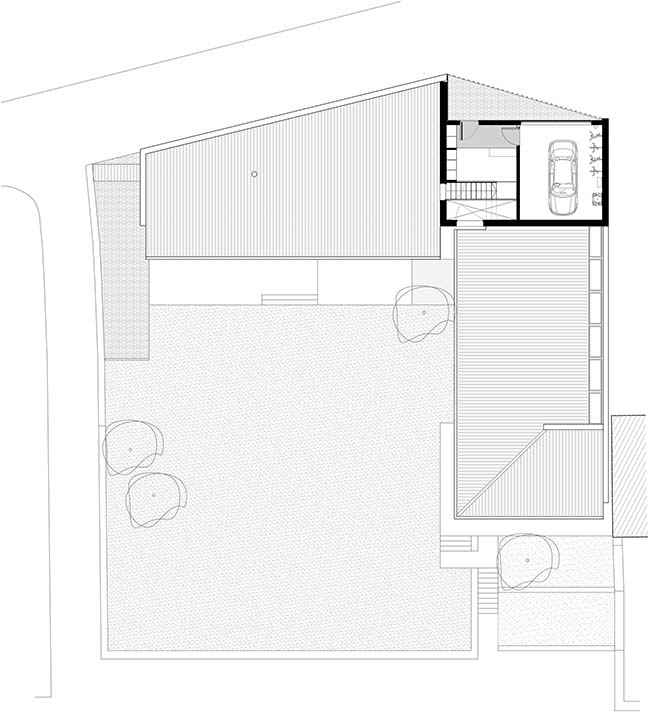 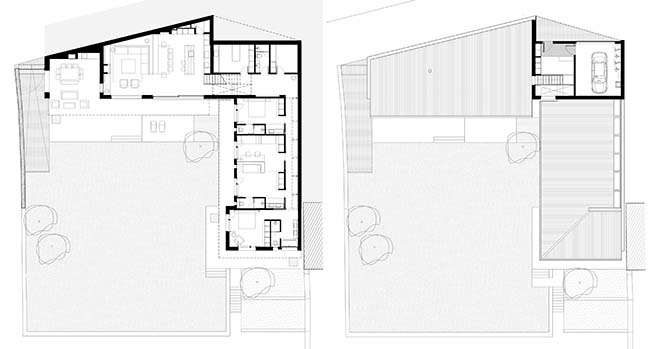 09 / 05 / 2018 The land is situated in Cerdanya area, in an old settlement where rehabilitation began 15 years ago. Currently it consists of 5 houses...