The owners of this 70-square-meters studio apartment wished to create an modern getaway for themselves in the historic Neve Tzedek neighborhood in Tel Aviv. The architect Raz Melamed was chosen for the project. 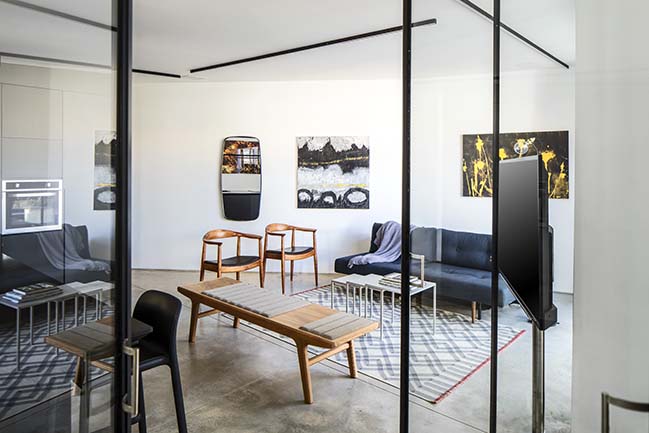 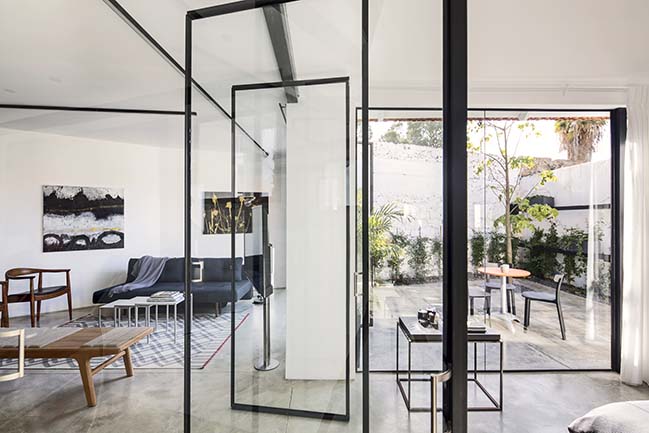 From the architect: Melamed had previous experience with refurbishing and modernizing historic properties in the neighboring ancient city of Jaffa, but the project in Neve Tzedek presented a whole new set of challenges. However, within a few months of hard labored work alongside creative engineer Buki Snir and contractor Elad Cohen, Melamed succeeded in revealing the property’s hidden promise and giving it new life. 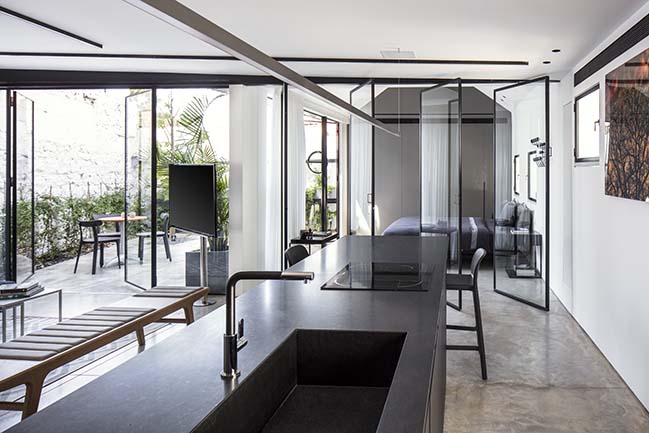 The property, closed and derelict for years, was comprised of a patchwork of shacks that were joined together to create a dark and disjointed maze with a hidden patio. A slanted wall truncated the entire space. The property needed a thorough renovation, but its location in the historic neighborhood required a careful work of preservation and protection of its outer shell. 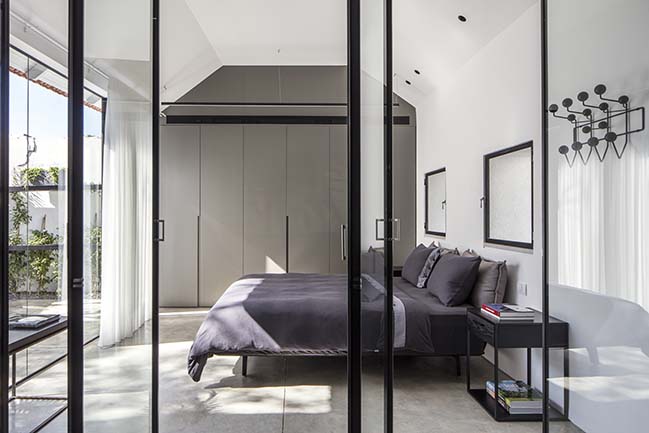 Melamed created three alternative plans for the interior. The first attempted to create the illusion of an open rectangular space, while hiding the slanted wall, the second worked the slanted wall into the plan and the third heavily relied on it. “We chose the first plan, extenuating the horizontal and vertical axes (Cardo and Decumanus), and dividing the interior into four rectangular spaces: sleeping area, living room, kitchen and patio,” says Melamed. 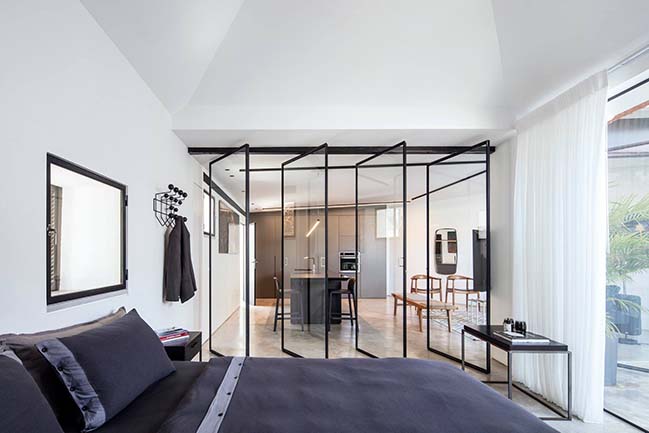 An intersection of vitrine windows to the patio on two fronts, and Belgian style pivot windows between the sleeping and kitchen areas allowed centering the property around its well lit patio, while protecting it from the outside gaze for added privacy. Melamed chose wooden shutters typical of the neighborhood for the windows facing the street, and kept the interior open, allowing airflow and a clear line of sight between all the spaces of the interior. In order to further maintain the open plan in the interior, the bathroom was hidden behind a door in the kitchen. With this, Melamed succeeded in creating a sense of an urban secluded villa built around a private courtyard, in what is essentially a small one bedroom apartment. 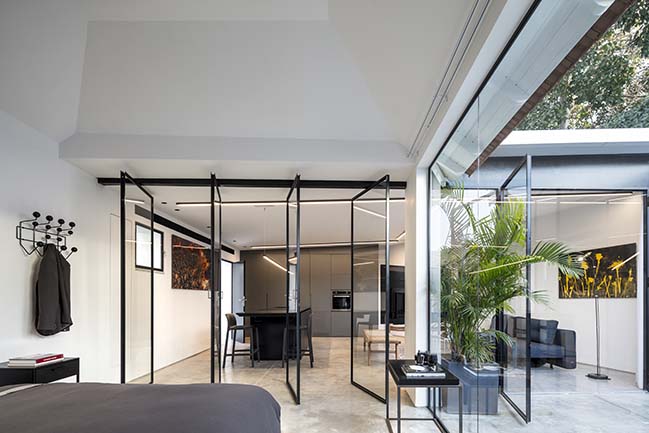 Before he could put his grand plans to action, however, Melamed needed to tackle a few more challenges. After years of neglect, the asset needed first to be thoroughly cleaned. Its infrastructure was then replaced, as well as the rotted beams supporting its roof. Situated at street level, the asset suffered from repeated flooding in the past. The affected walls were fixed and the entire property was sealed in order to prevent repeated water damage. This was done without changing the exterior facades or the building’s hight, as required by the preservation authorities. In keeping with the DNA of the neighborhood, two steel rails were chosen to support and strengthen the exterior wall in the patio. 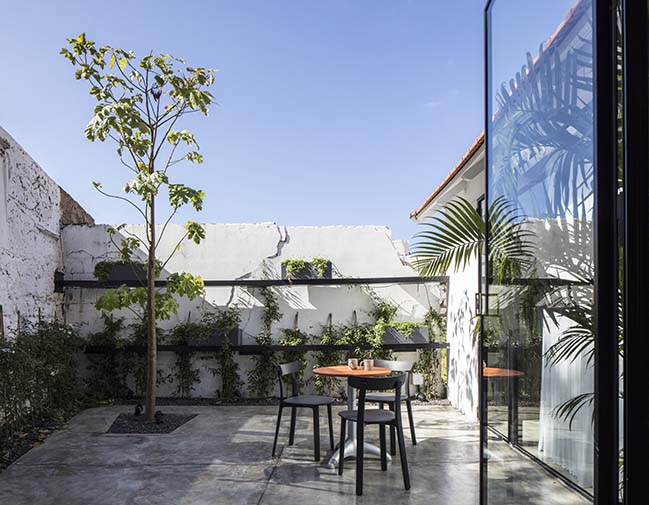 For the interior, and in order to create a clean yet cosy modern space, Melamed chose a gray color palette, as well as natural substances and exposed raw materials. Polished concrete flooring were laid in the interior as well as the patio. Gray tiles were chosen for the bathroom, and the woodwork in the kitchen and the bedroom was also painted gray. The island in the kitchen was dyed black to create a focal point in the space and to match the black granite countertop that was chosen above it. The Belgian-styled ironwork that was incorporated in the pivot partitions, the doors to the patio and the windows, received a coat of coal black. Wooden furniture and greenery in the patio completed the picture and finally provided the owners with the harmonic getaway they hoped for in the heart of the city 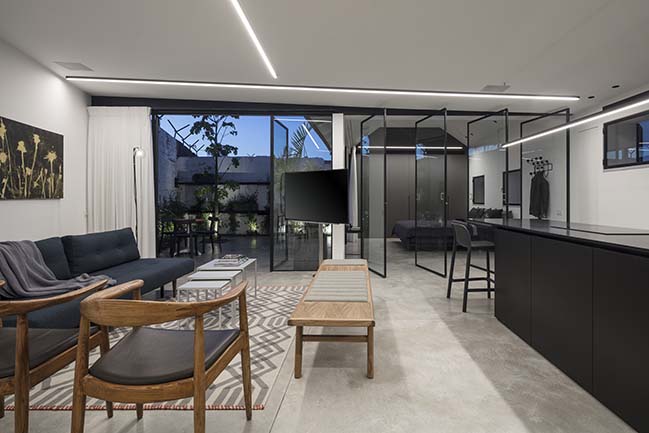 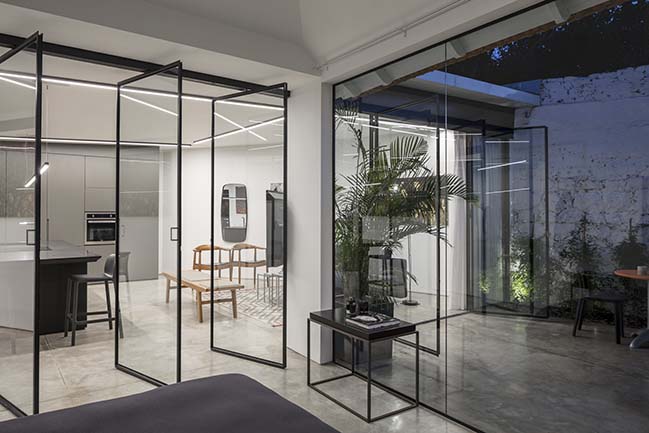 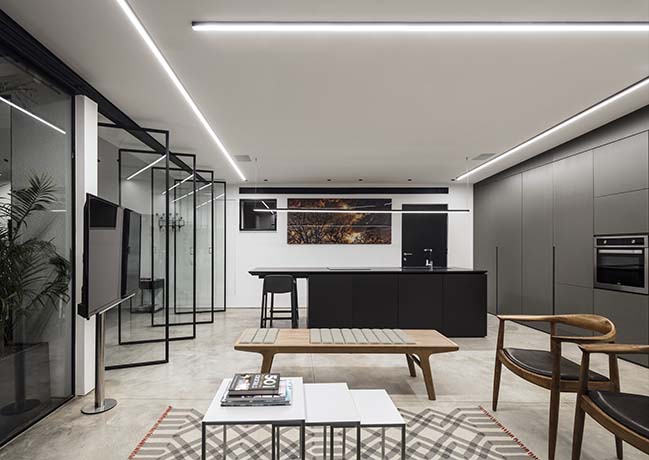 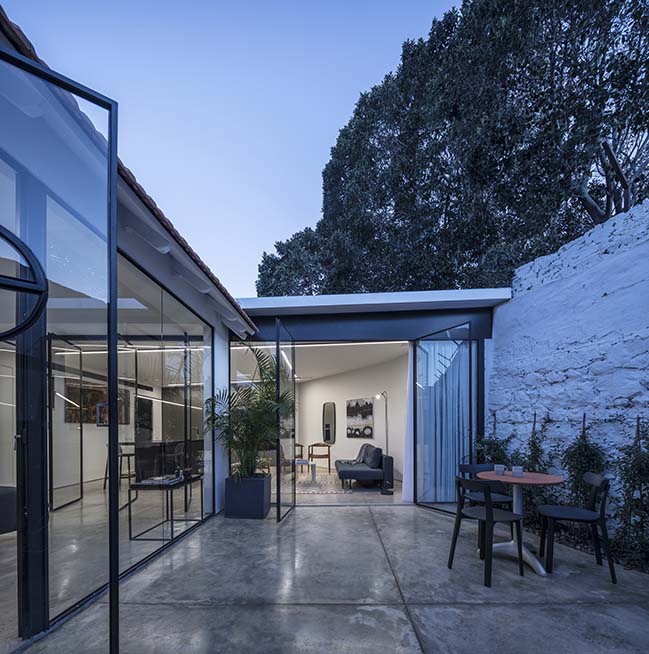 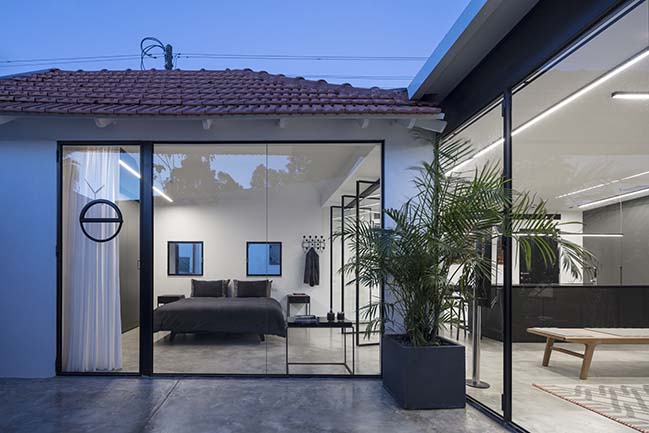 > You may also like: SW House in Tel Aviv by Arbejazz Architecture Studio 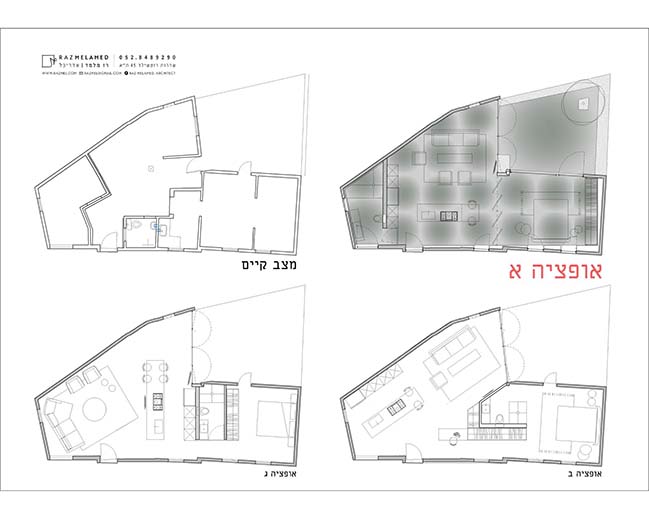 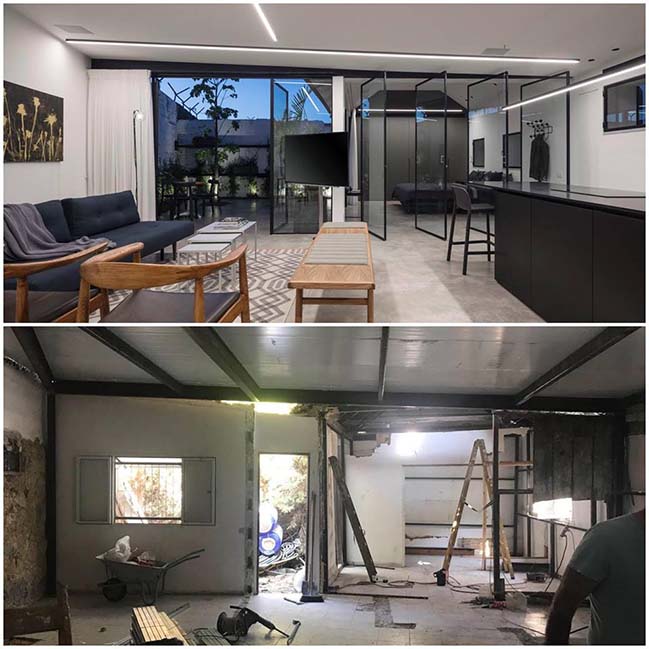 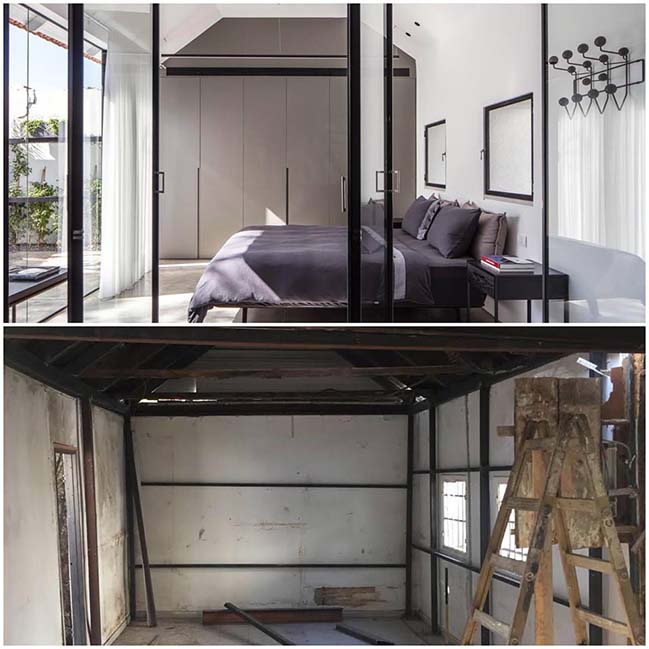 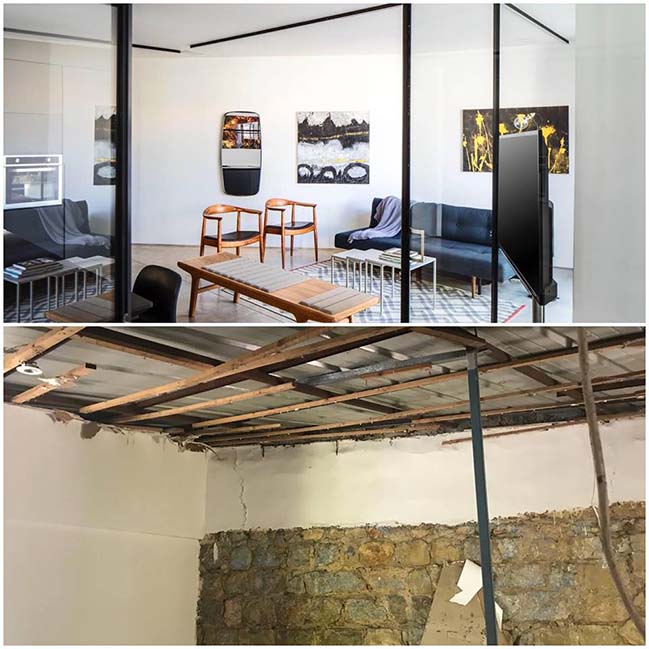 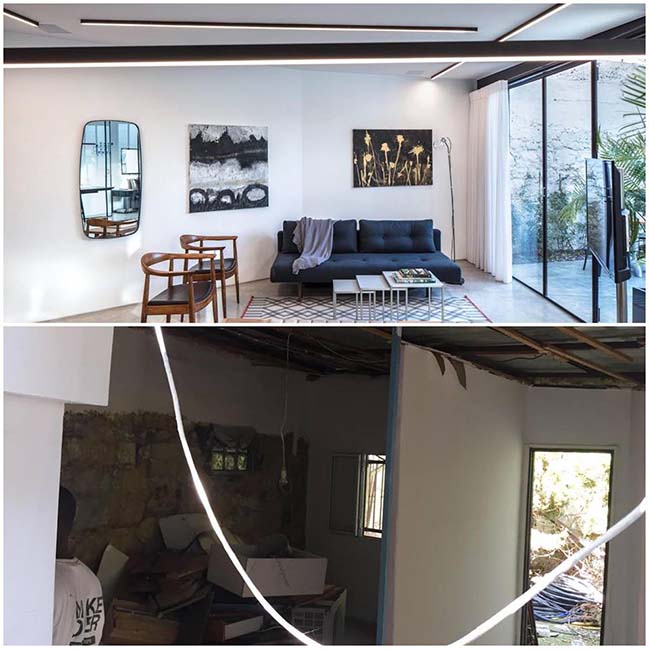 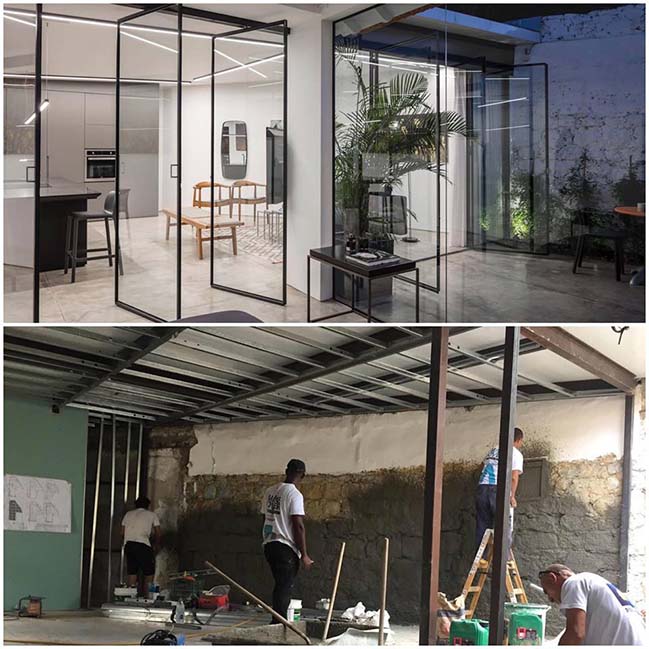 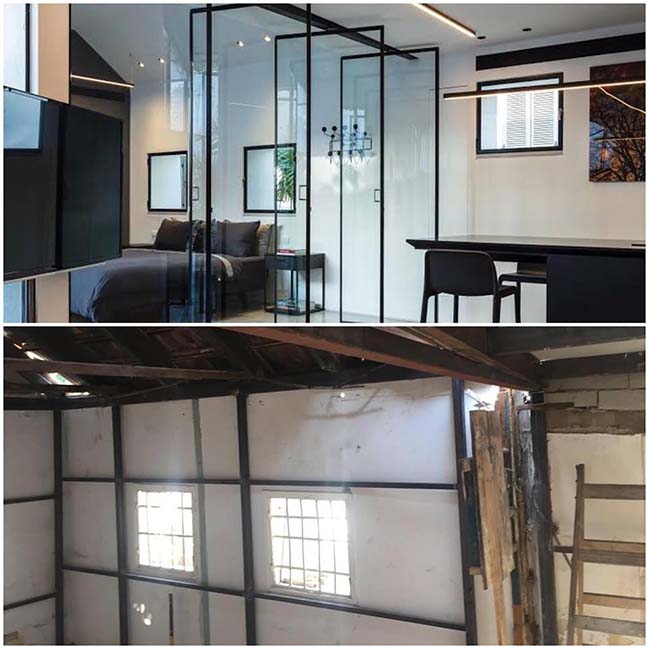