This single family house was renovated by 3SIXØ Architecture for a couple with a young boy who returned to Rhode Island after years of living in a Frank Lloyd Wright original in upstate New York. 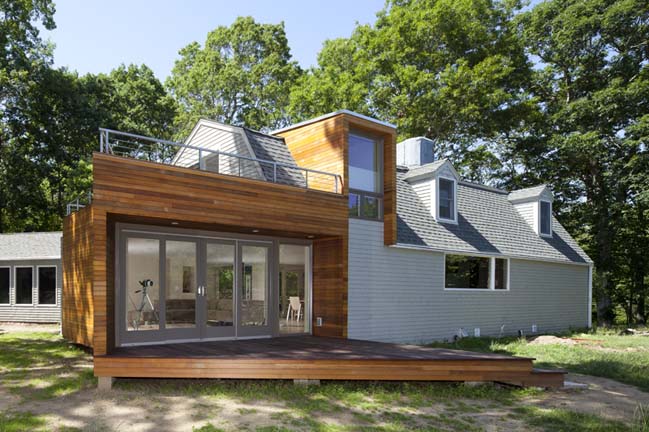 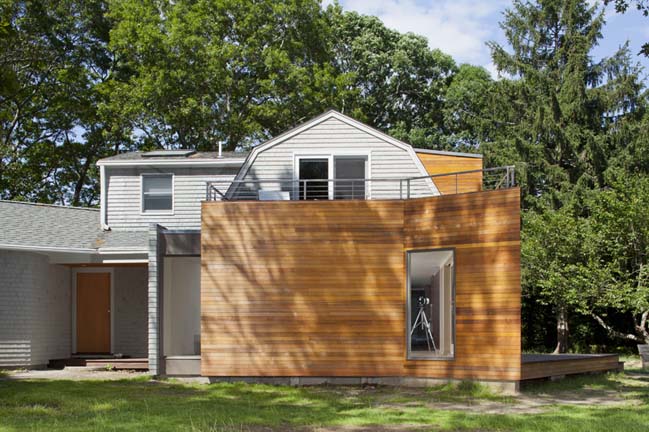 According to the architects: Our clients asked us to deeply connect their daily life with the spectacular overview of the Pettaquamscutt river and wooded surroundings of the property. The existing colonial revival house built in the ‘50s, added to numerous times, had become an aggregation of rooms, most with standard double hung windows, and had no particular relation to the site and view. 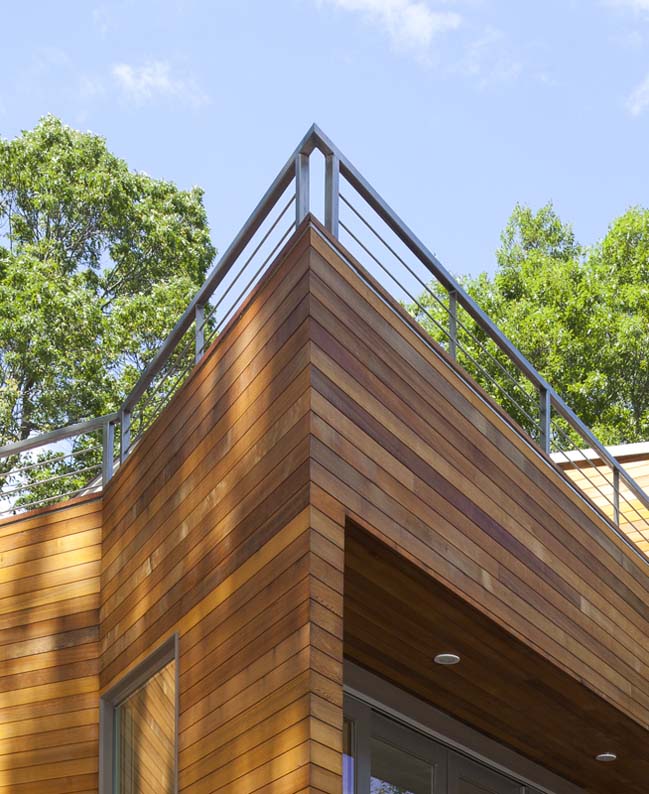 Some things were givens, unalterable, such as the 7’-0” ceilings, the basic footprint of the house and other fundamentals of its construction such as the roofs and exterior walls. Given those limits the former dining room, living room, kitchen and family room of the house underwent a radical spatial metamorphosis into a single large family space, connected by a “bridge” foyer to more reflective areas of library/study and in home office. New large floor to ceiling doors and windows strengthened connections to the outside and a new addition extended and reoriented the focus of the house towards the water. Several exterior decks were added to continue the connection between inside and out. Upstairs, a new master suite with adjoining bath area, large new dormer and private deck reflects the minimalist, nature focused sensibility of the owners. The bedroom has no furniture besides chair and bed; like downstairs, clutter is managed with extensive closets and cabinetry. 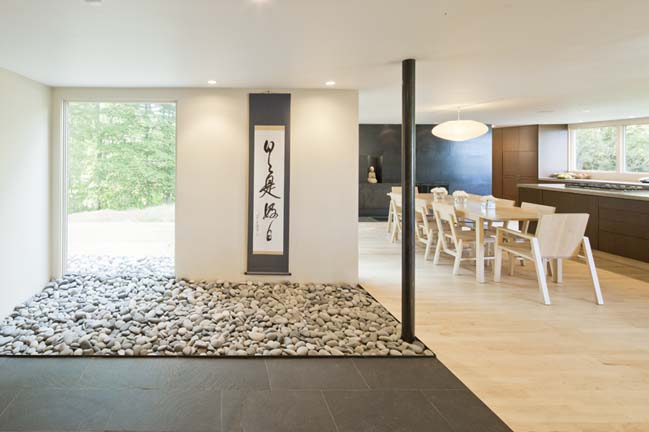 The cabinetry is designed as a unifying anchor for the open floating floor plan. On the ground floor a long full length wall of wenge cabinetry is set flush and continuous with the glass doors of the living area. At the opposite end the cabinetry terminates as part of an authentic tatami matted, shoji screened meditation and guest room. 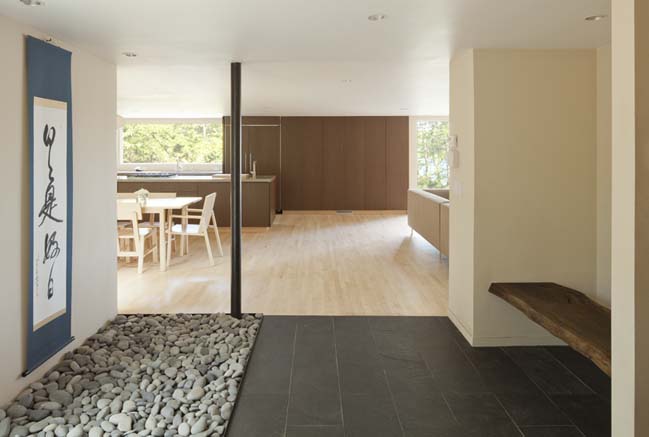 On the exterior the house has transformed as well. The original house had most of its windows and doors removed in part to simplify the house form in preparation for the new additions (simple forms don’t conflict with additions). Clear stained cedar distinguishes the new additions from the painted shakes of the existing house, hinting at the very different kind of spaces of the interior. 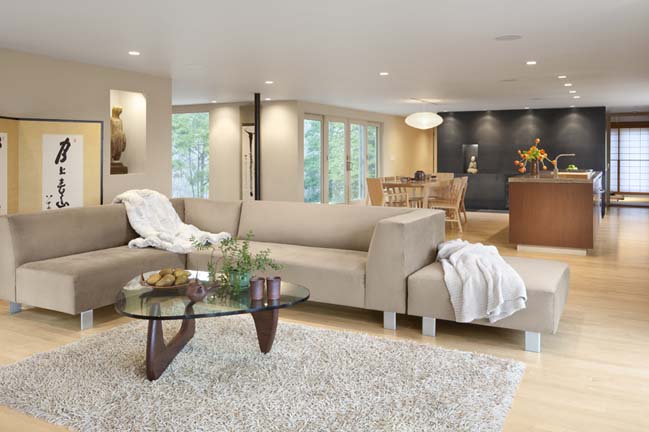 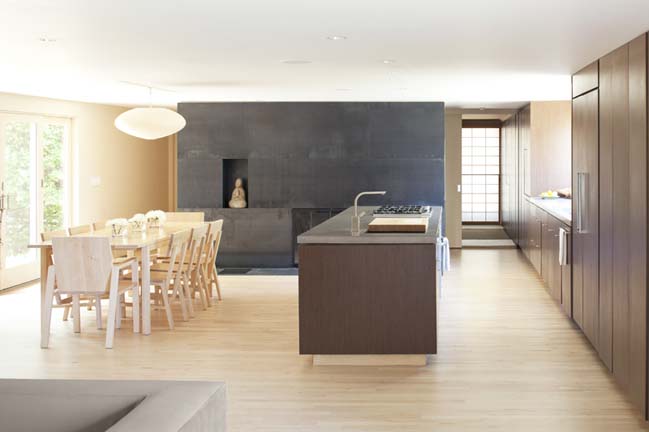 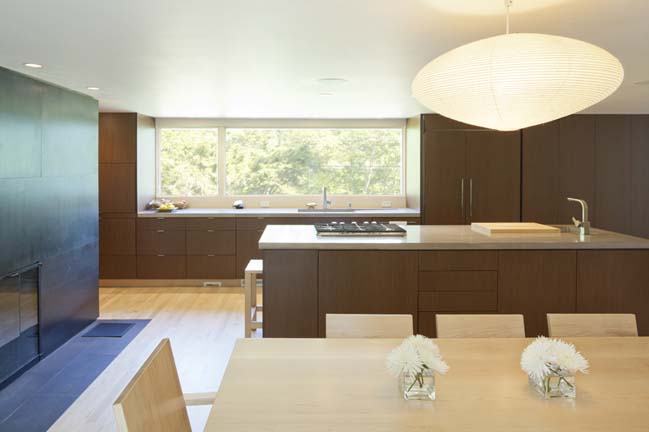 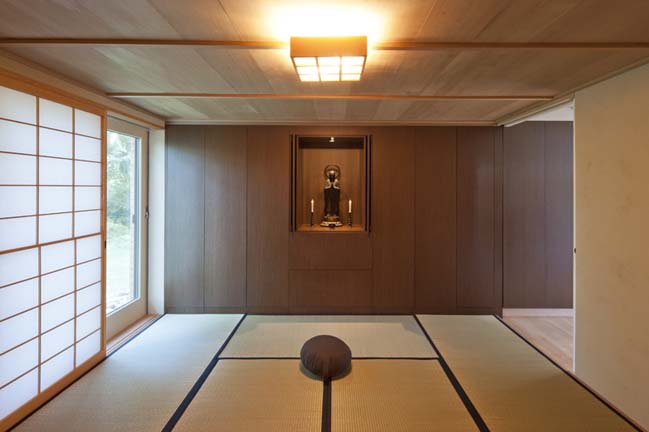 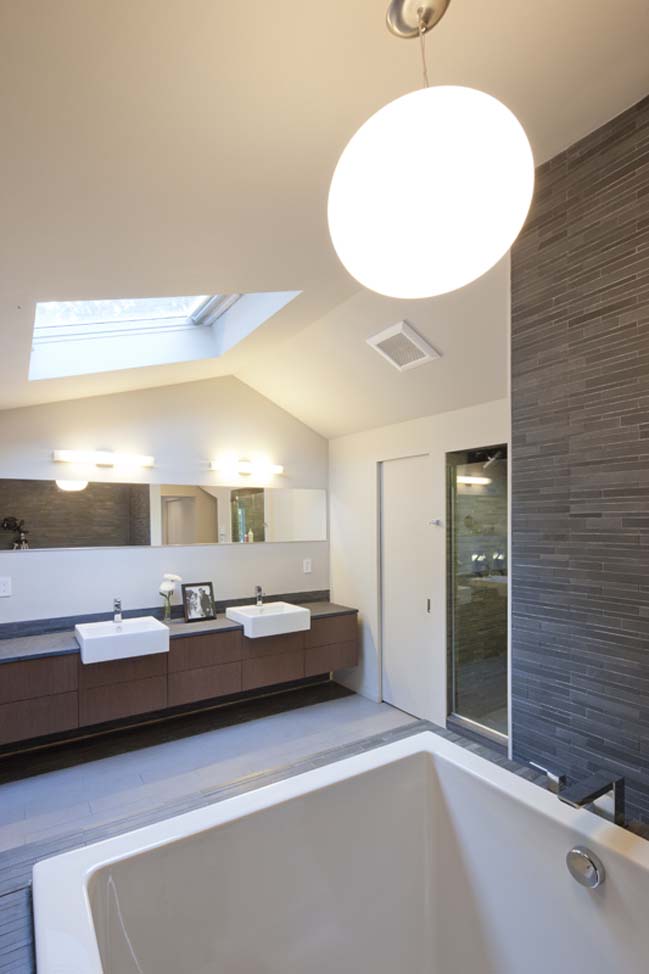 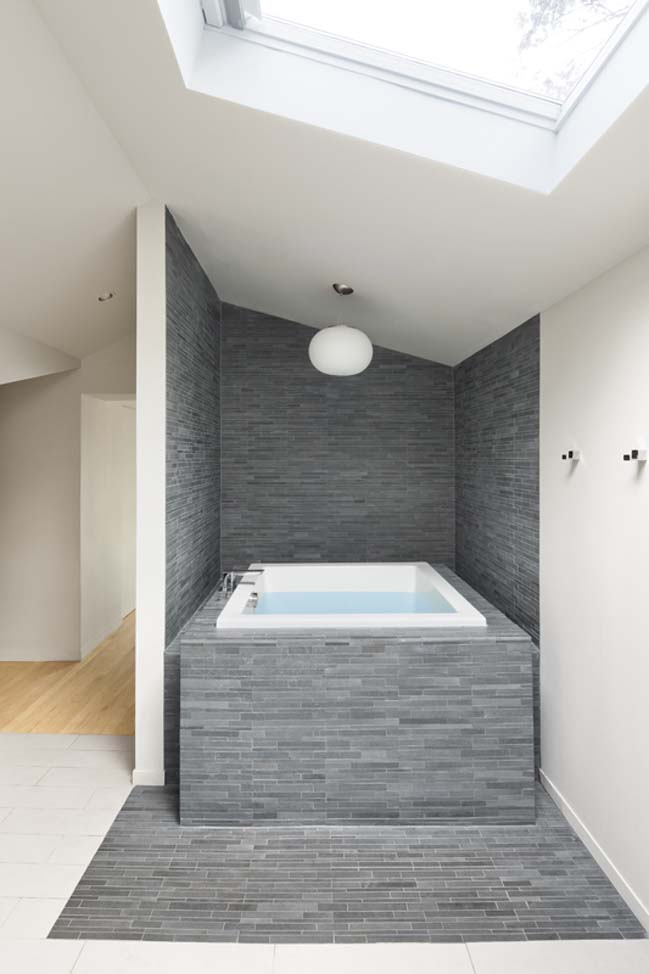 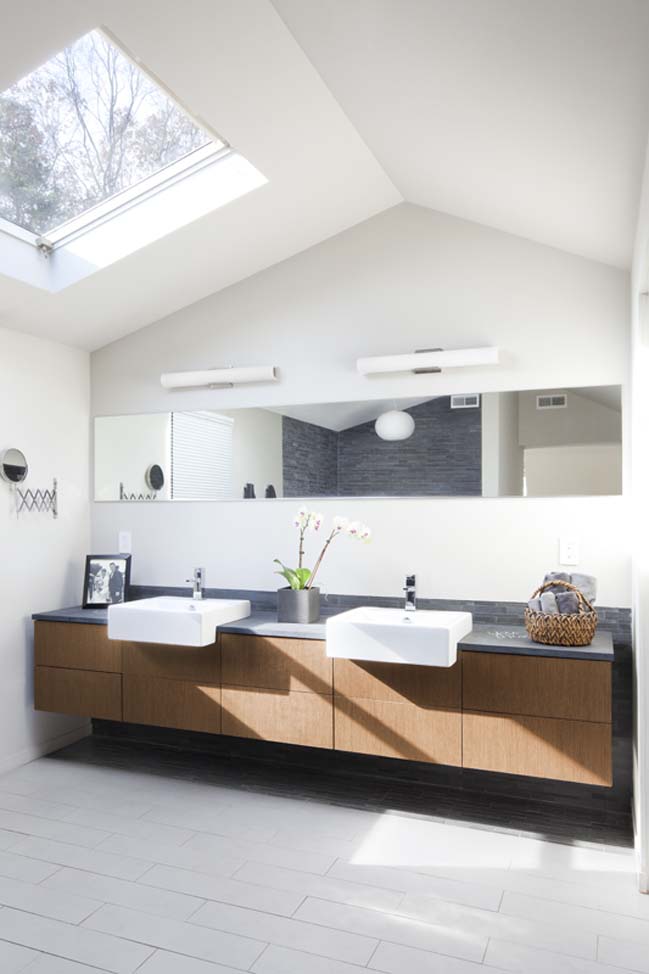 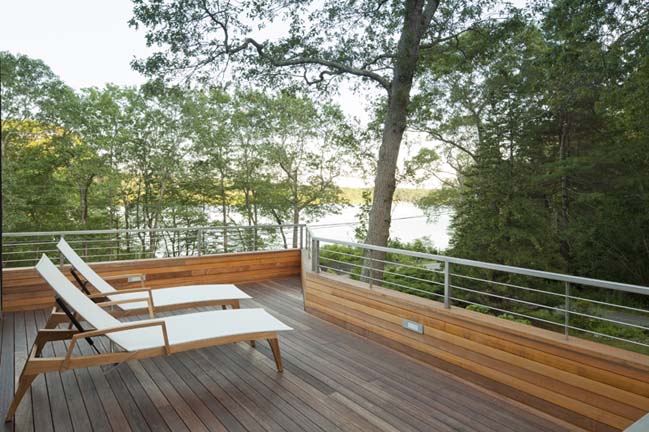 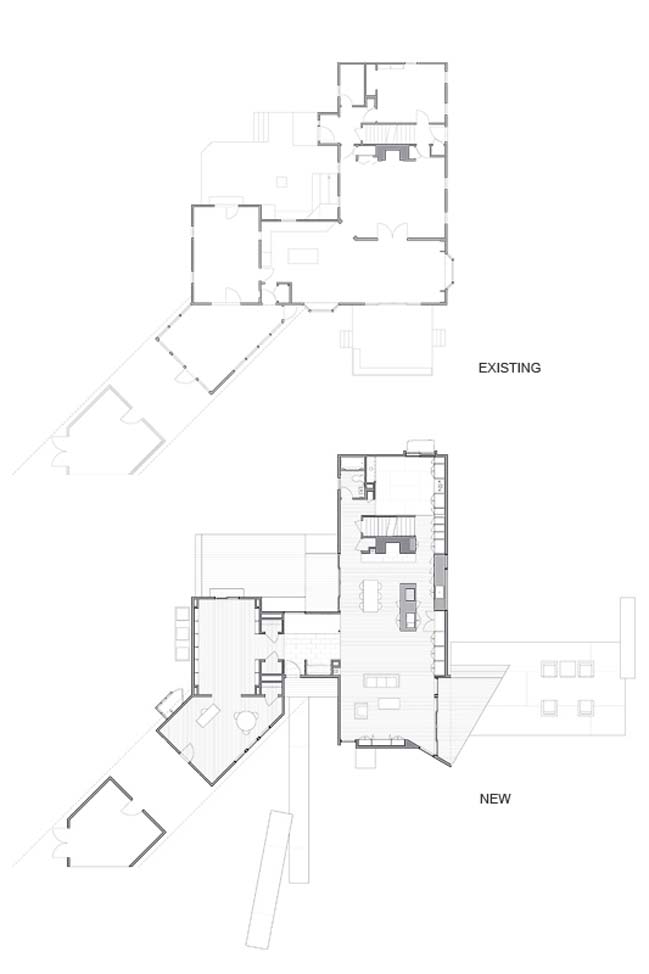