The Quesnel Apartment project consists in the renovation of the ground floor apartment of a 1920's five-unit plex located in the Little Burgundy borough, in Montreal... 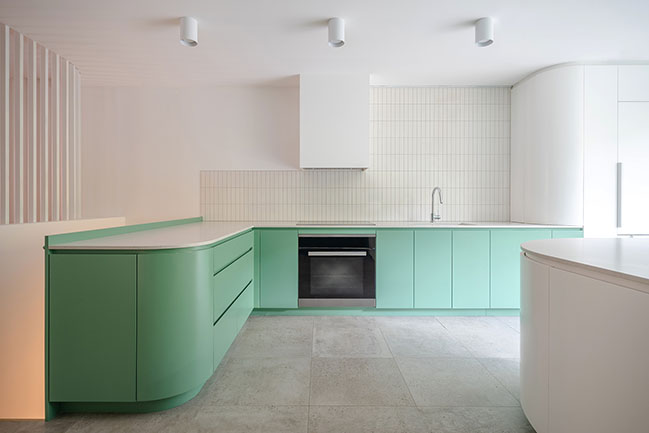 From the architect: The family living in the apartment wished to open up the rather dark living spaces in order to maximize the natural light in the heart of the home while establishing a more direct and spontaneous relationship with the backyard. 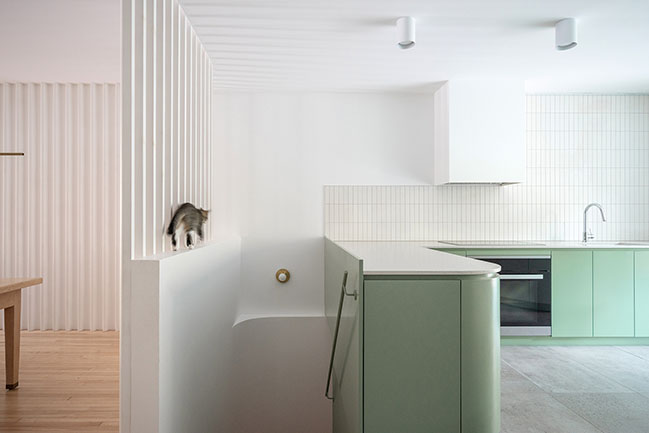 The layout was reconfigured around the primary need to open the apartment from front to back while maintaining the existing wall pattern as much as possible. This results in the arrangement of closed rooms on one side and a string of open living spaces on the other, all separated by a central corridor. The intervention tends to preserve the original character and several existing decorative elements to draw subtle inspiration from them: whether it is through the curves of an arch, the fluting of the columns and cast iron radiators or the colored stained glass doors. 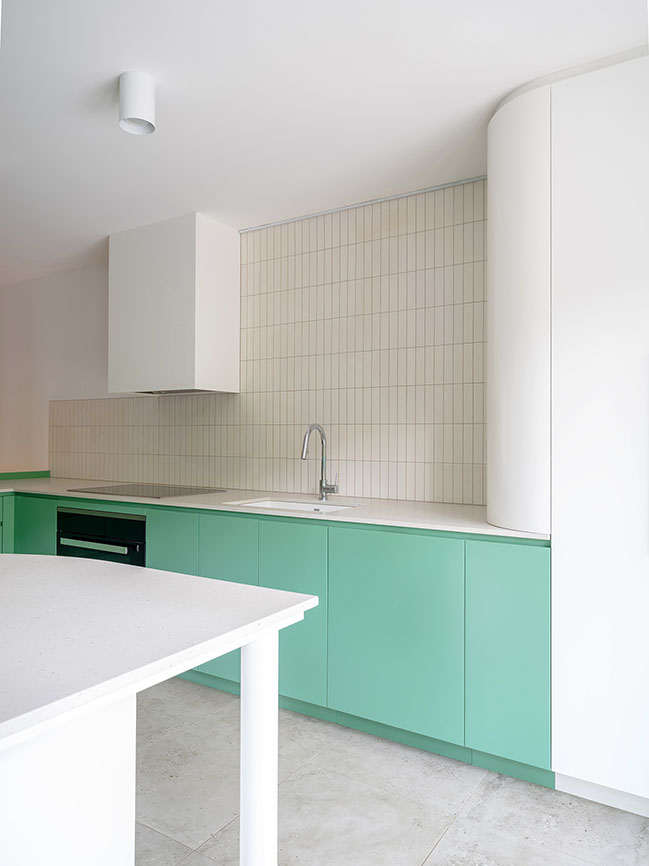 A new closet is first inserted within the existing hallway announcing the nature of the new intervention further ahead in the apartment. The green water shade influenced by the colors in the stained glass and the ceramics found in the existing vestibule becomes one of the key elements of the overall architectural concept. 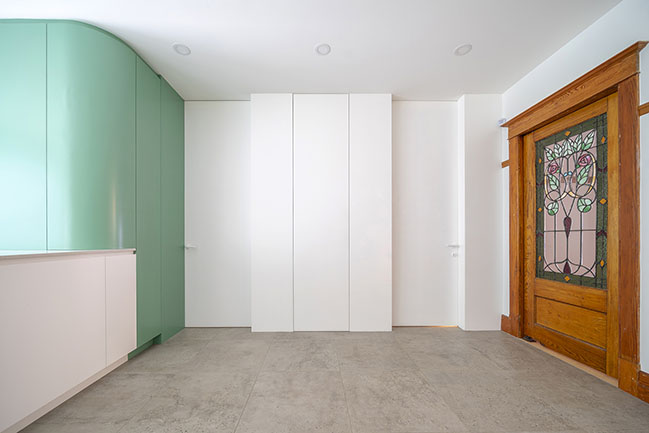 Inspired by the rounded arch and richly ornamented columns found both in the existing living and dining room, a claustra composed of vertical white painted wood flutes acts as an intimate interface with respect to the new kitchen. This semi opaque screen filters the natural light and delimits the dining room while maintaining a desired visual connection with the kitchen. Creating a playful vertical texture on the wall with it’s equally spaced and rounded wood slats; the claustra endues an undulating movement to the space on a rounded wall and ceiling. 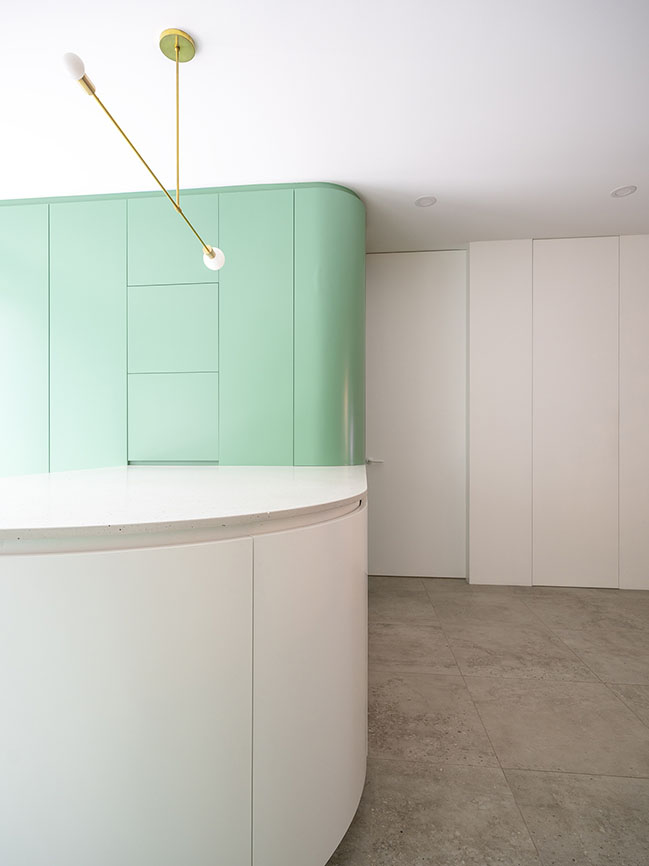 On the opposite of the dining area and new staircase, the kitchen cabinetwork unfolds in the space into a rather playful organisation revolving around the island-peninsula. The use of curved elements in the kitchen allows a fluidity of movement and comfort proper for this family with two dynamic young children. 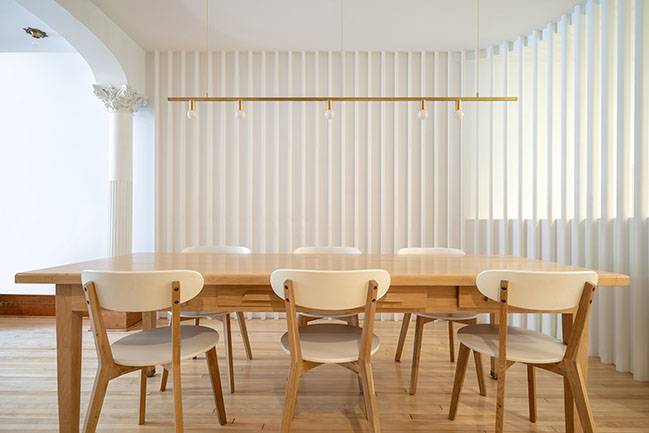 In the bathroom, the combination of different forms and shades of white ceramic tiles brightens the room and compensates for its absence of natural light. The intervention relies on a variation of textures and the integration of rounded geometry evoking the character and atmosphere of the existing apartment. The restored clawfoot bathtub and the new brass light fixtures all contribute to create an historical dialogue with the original architecture of the building.

As a result, the renovation blends with harmony and playfulness, the existing charm of the original apartment with the newly contemporary and inventive intervention. 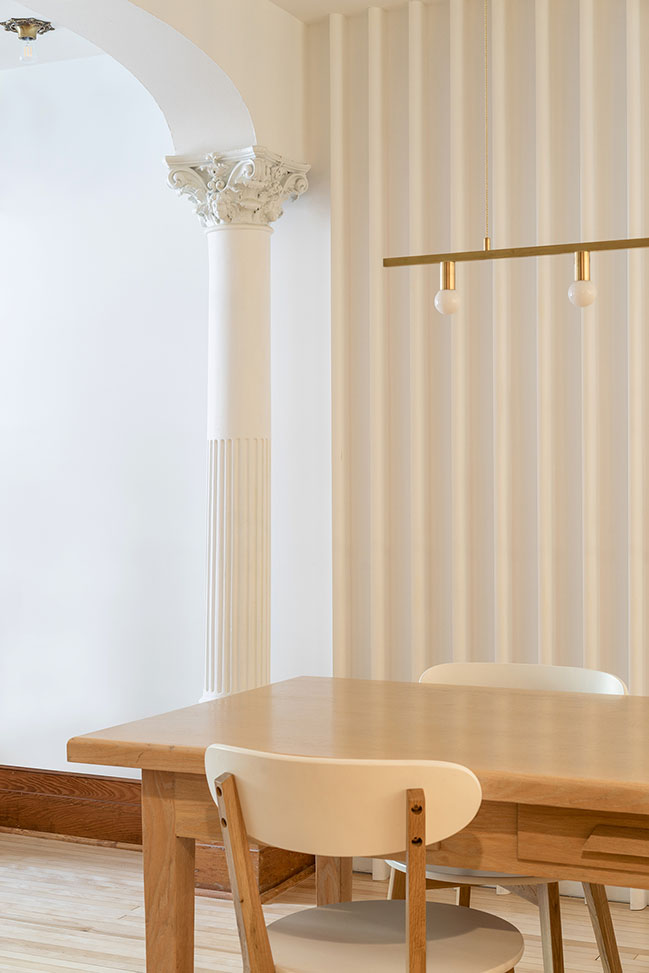 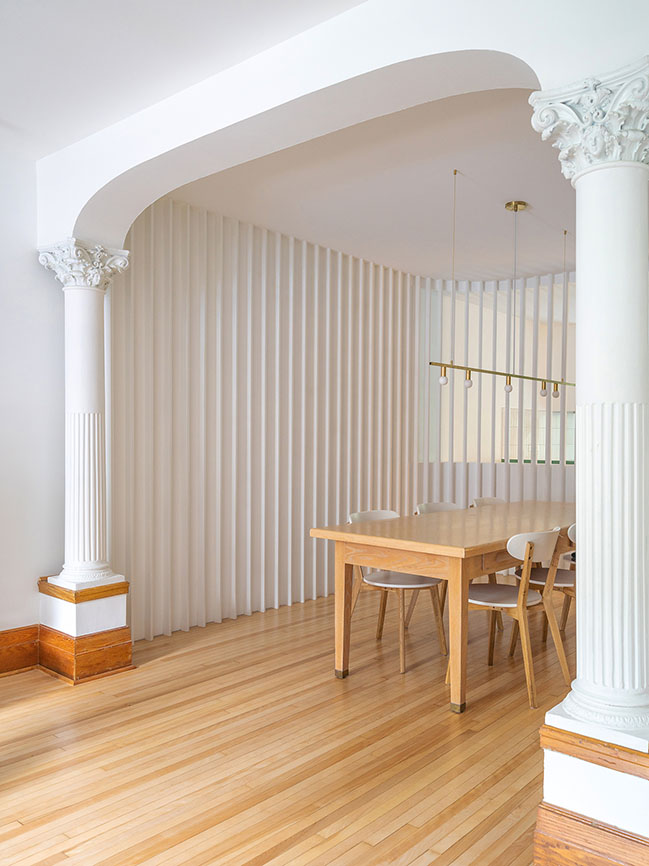 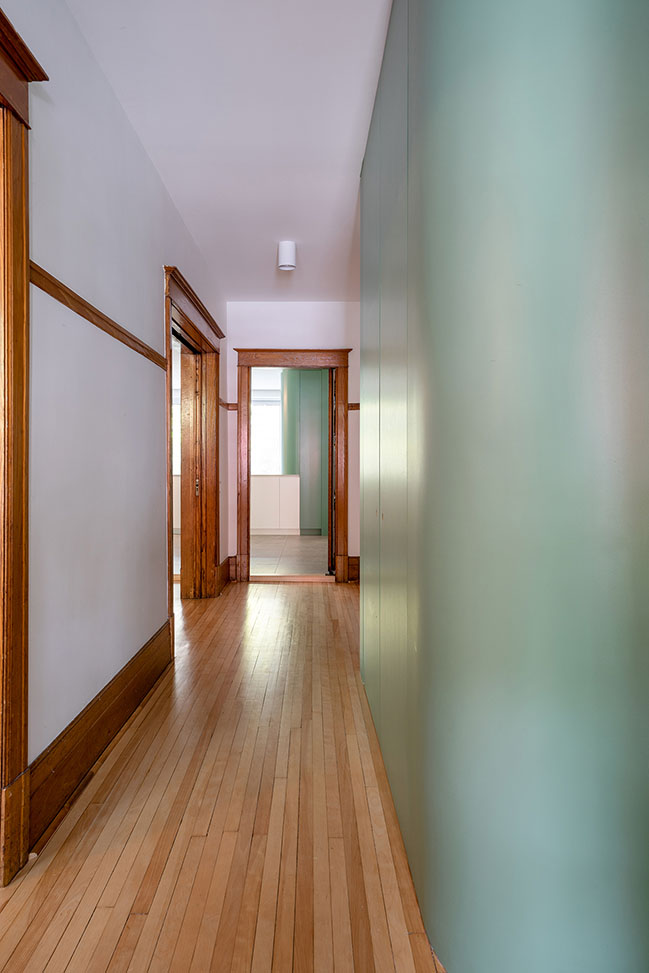 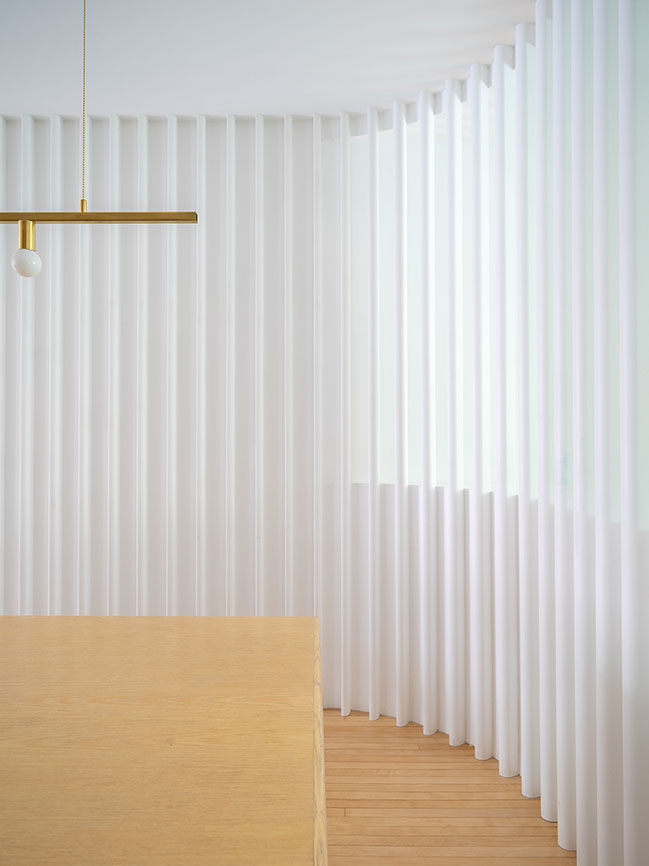 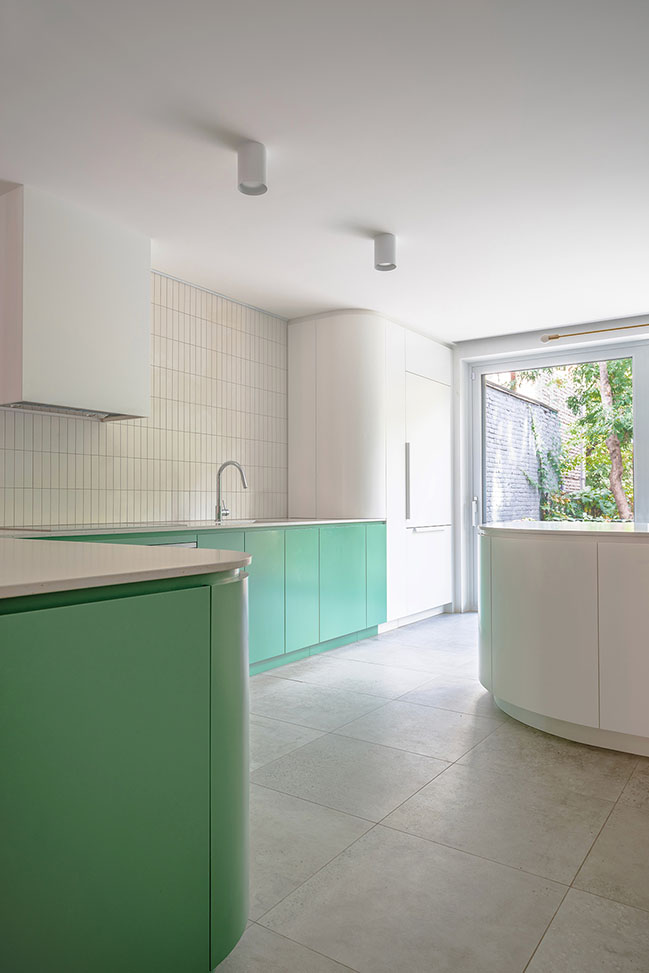 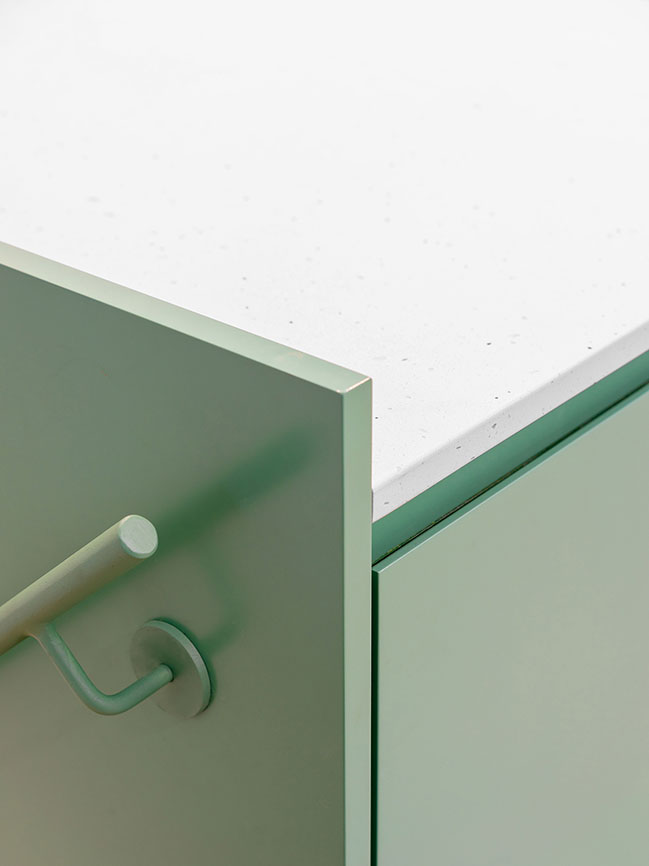 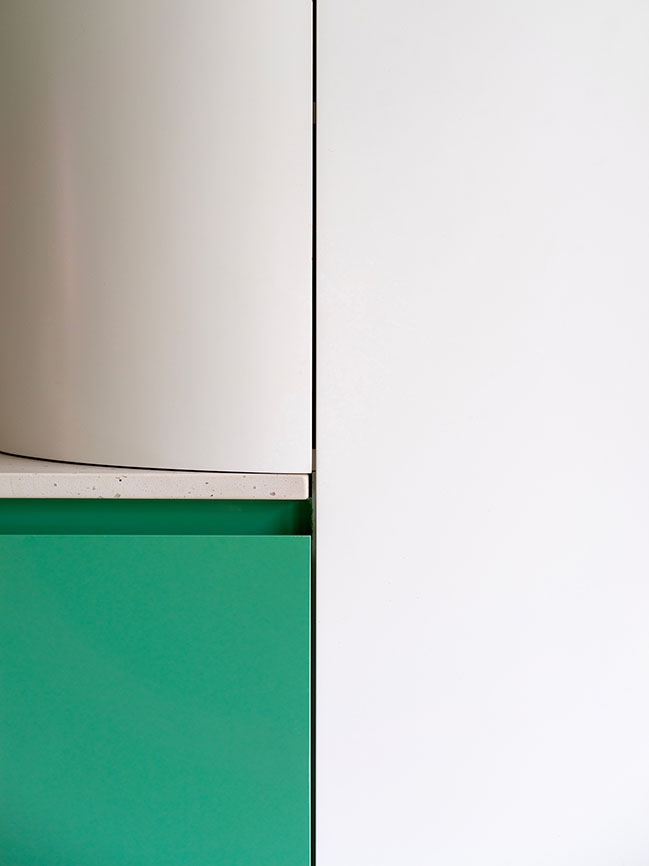 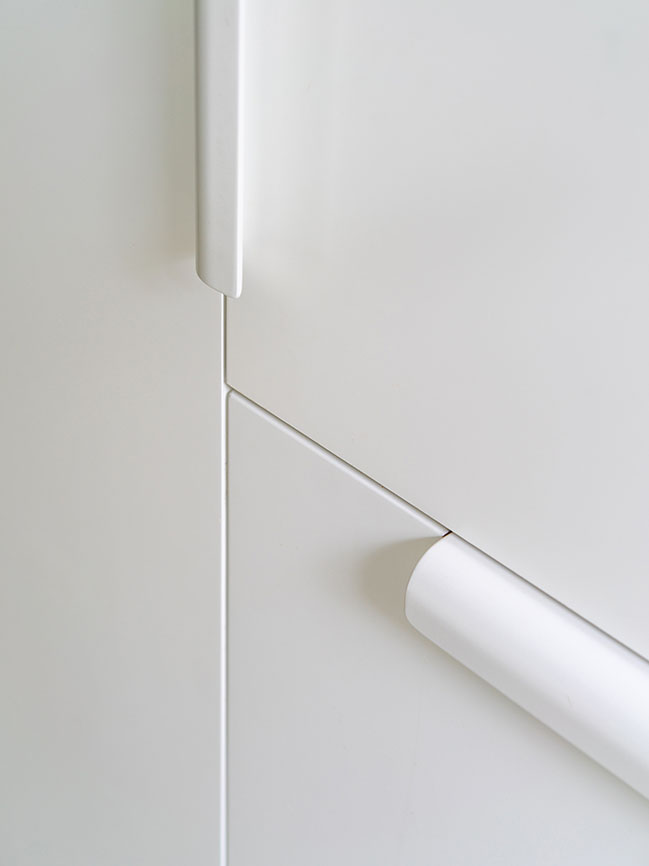 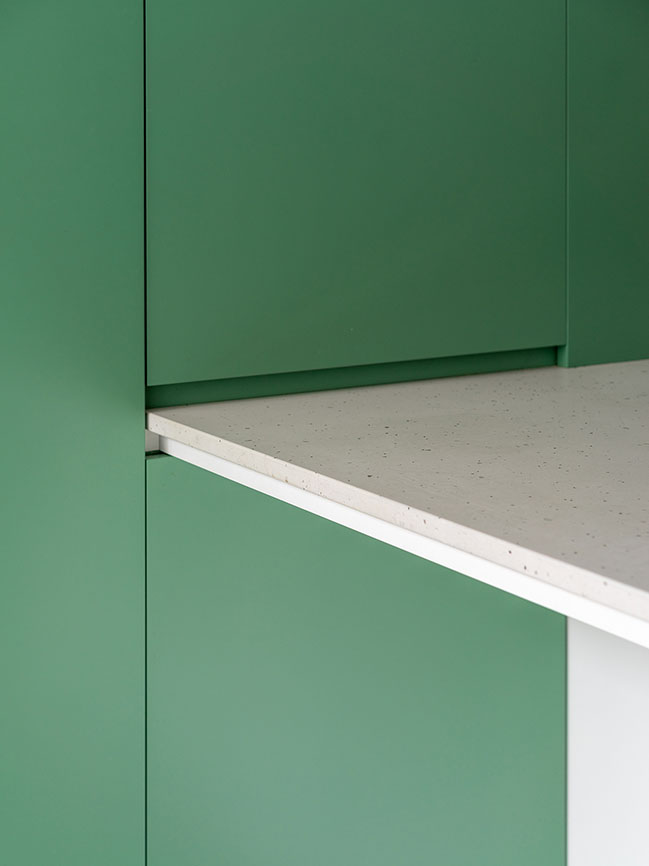 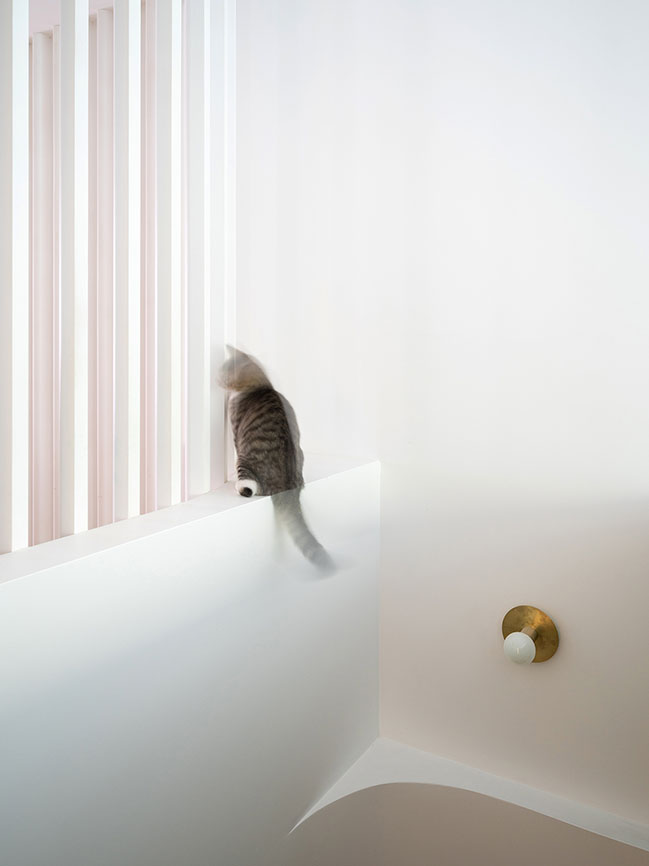 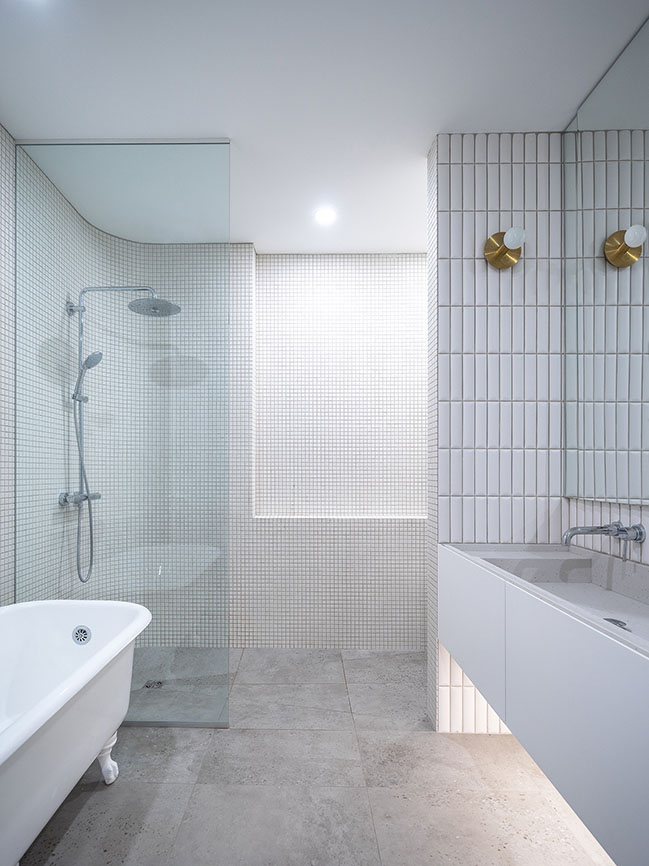 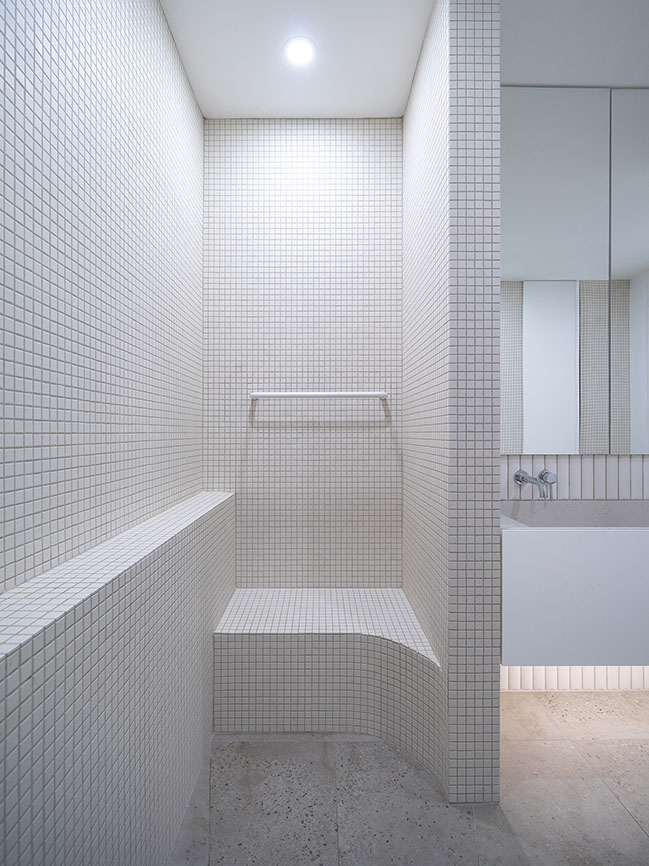 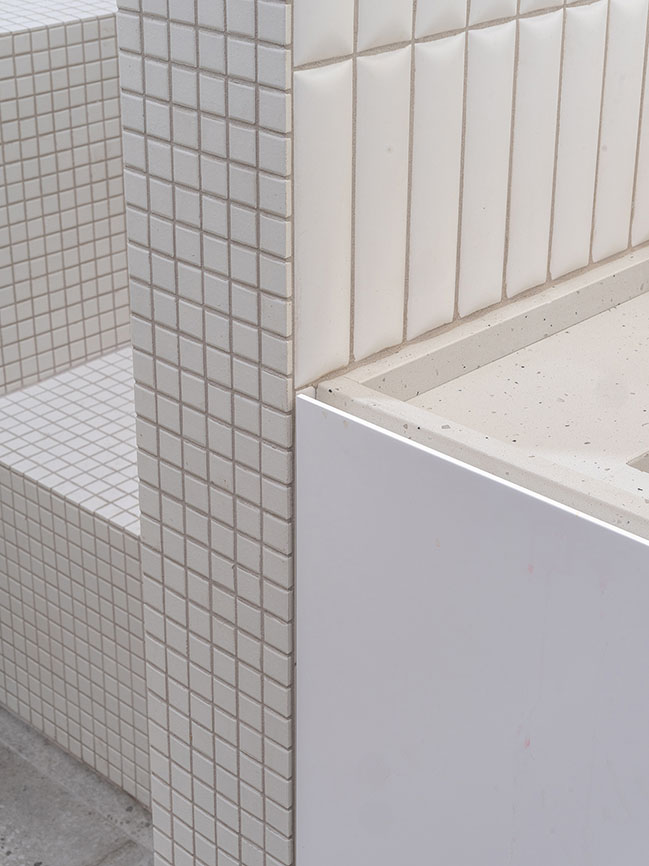 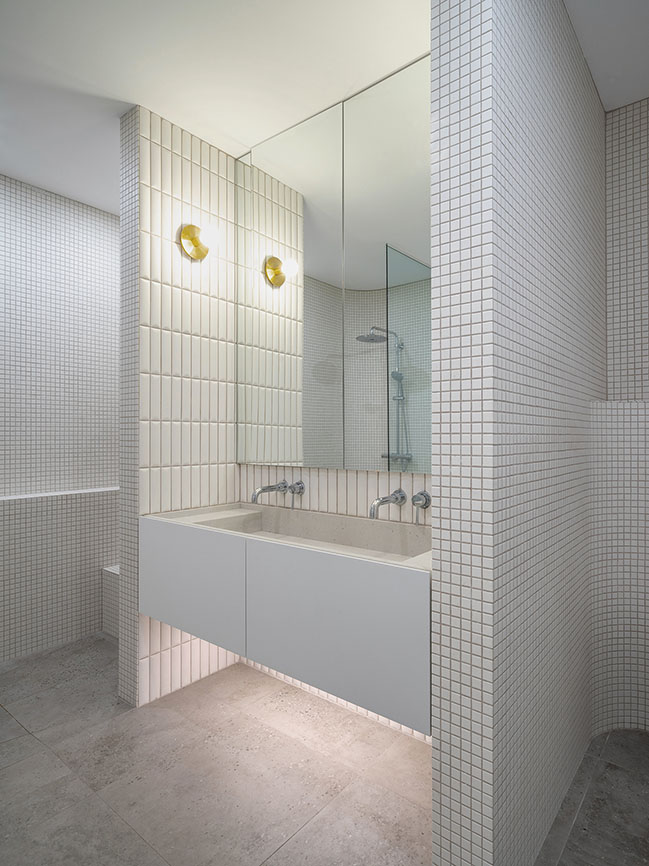 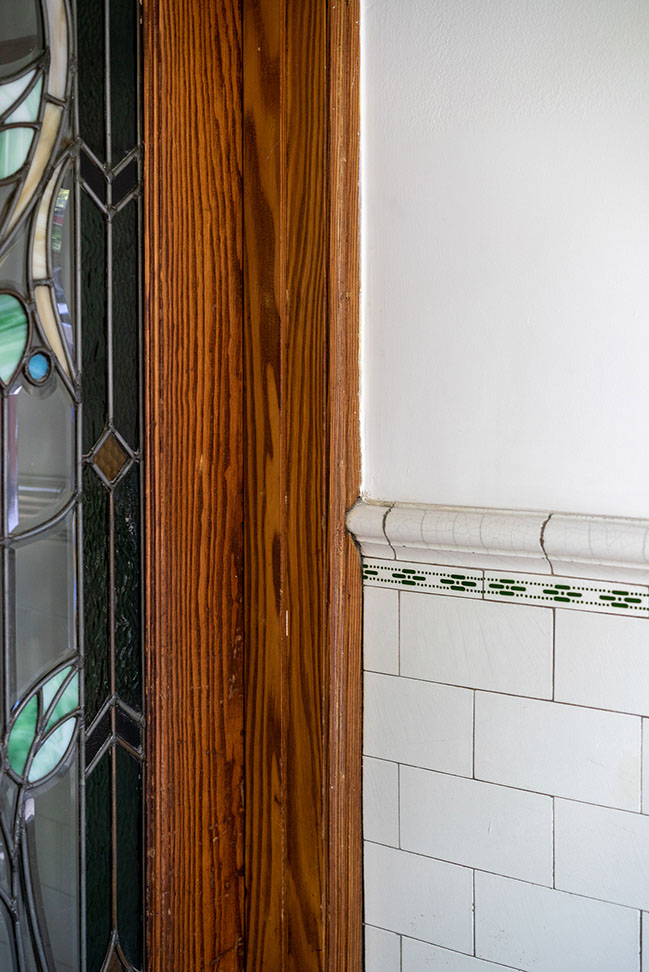 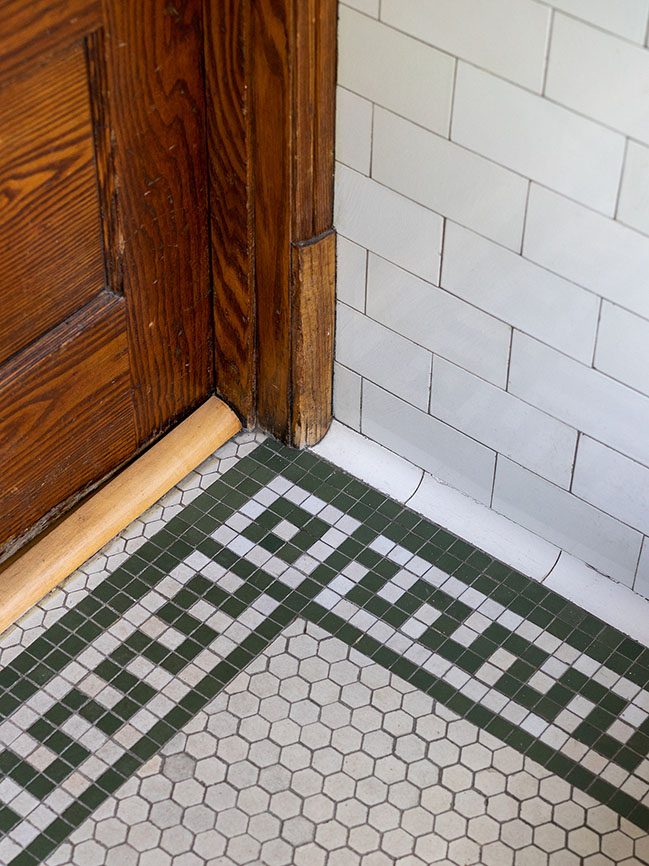 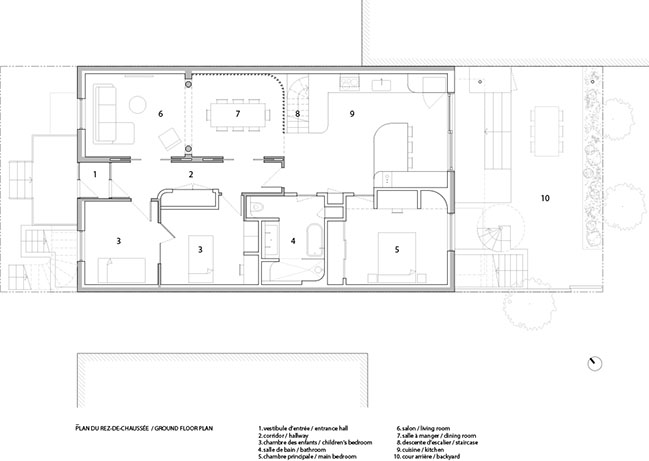 10 / 15 / 2021 The Quesnel Apartment project consists in the renovation of the ground floor apartment of a 1920's five-unit plex located in the Little Burgundy borough, in Montreal...