Having grown tired of Chicago’s humid summers and cold winters limiting their use of an existing screened porch, the clients requested an enclosed sunroom, uplifting and full of light, to be enjoyed year round. The architect, Matt Flynn, wanted a fluid presence to soften the rectangular space. The result: a curvilinear, translucent, backlit, full-room suspended ceiling that bathes the sunroom in relaxing, diffuse light. 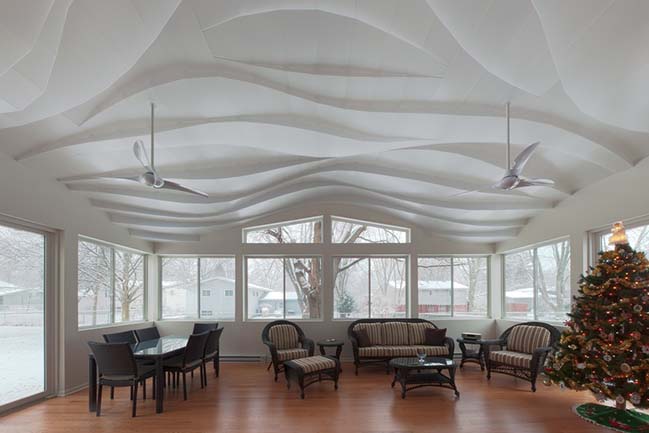 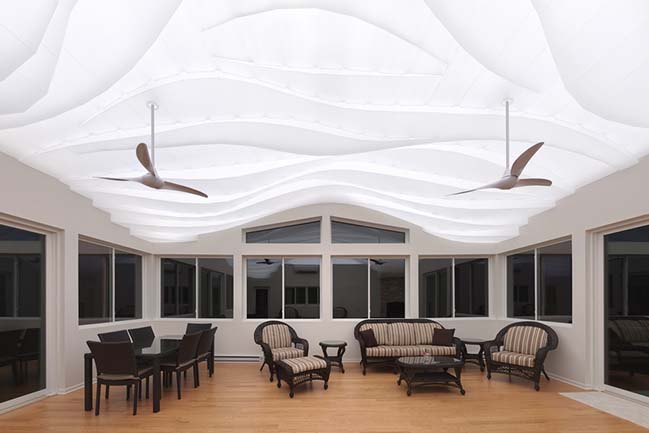 Design
The initial intention was to build the ceiling in flexible drywall. But when lighting for the room was discussed – with the typical solutions being recessed ceiling fixtures or cove lighting – the design concept took a sharp bend. By constructing the project in translucent acrylic and hiding the light fixtures above it, the entire ceiling became the sole lighting element in the space. A velvety, matte-finished acrylic was chosen to eliminate mirrored reflections. With its large material presence, the surface began to flow over and down walls to further engage the architecture. 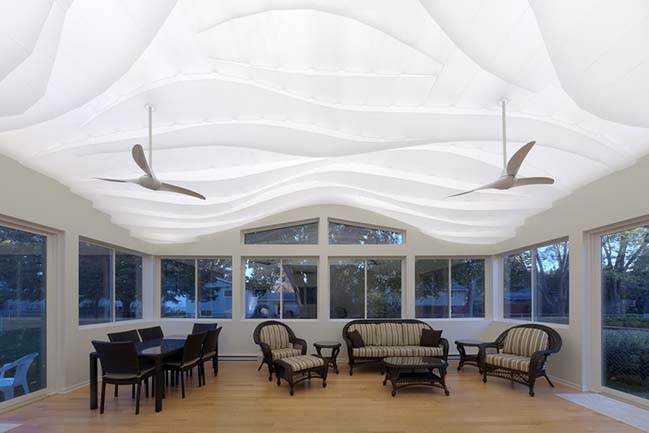 Environment Over Object
The sculptural form, surprisingly, avoids becoming a brutal focal point by its sheer size and undulating geometry. By extending to and beyond the sunroom’s boundaries, the ceiling passes beyond the field of vision from any single vantage point, turning into an environment rather than an object. The curved surfaces cross and blend each other to create a non-hierarchical and asymmetrical yet balanced composition. The lack of a singular focus allows the clients to relax below without distraction from the fluid presence overhead. Nighttime dissolves the physical character of the sculpture as the ceiling’s form dematerializes into light. 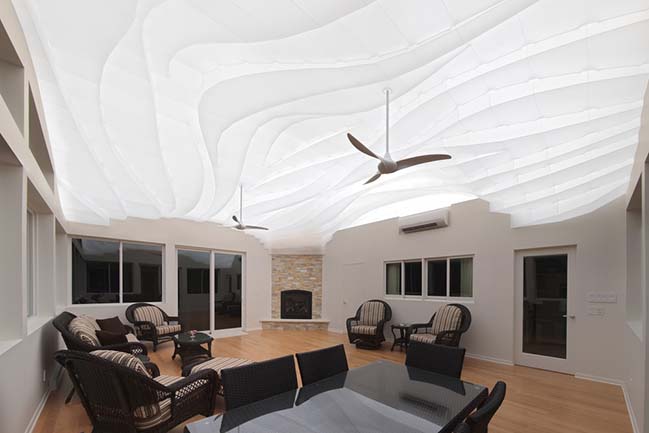 Creating Uniform Illumination
With the sculptural ceiling only eight inches away from the underside of the roof in certain locations, perimeter lighting or scattered point fixtures would have caused hotspots and dim areas. Accordingly, a large, uniform lighting array was needed to avoid falloff. Low-voltage LED tape strips were chosen for their long life span, diode spacing and capacity to cover vast areas inexpensively. Colour temperatures alternate between 3100K and 4000K in order to blend a fuller light spectrum and create cleaner, whiter light. Electrical wiring halves the room and then divides the LEDs again by colour before tying into four dimmers. Although the project was exempt from energy codes, minimal power achieves comfortable illumination while providing the clients with controls for bright, cool summer evenings or cozy, warm winter nights. 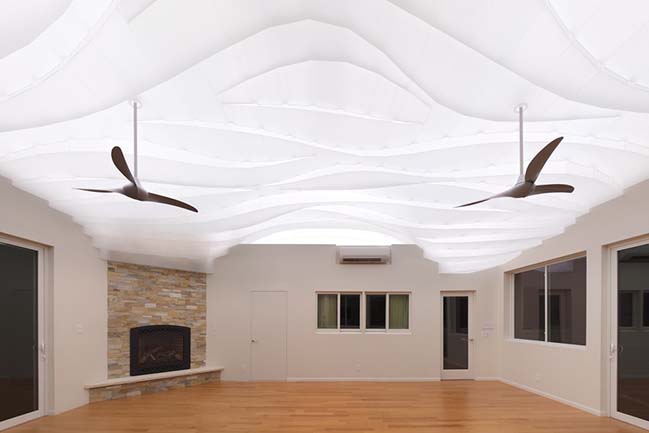 Avoiding Shadows By Scattering Light
Shadows on the backside of the translucent acrylic would have been visible from below. Instead of using thick, opaque formwork to support the acrylic, a tab-and-slot L-panel system was devised. Each piece hangs by two thin suspension wires and interlocks with the piece below it. Even still, if the LEDs had been mounted to the roof and directed downwards, the suspension wires would have cast thousands of shadows onto the translucent acrylic. Instead, the LEDs aim upwards, floating between the roof and the sculptural ceiling on clear acrylic sheets. This effectively converts the roof’s underside into a massive lightbox that disperses direct rays off its flat white paint. Cast shadows are eliminated and diffuse, indirect illumination is radiated to the room below. 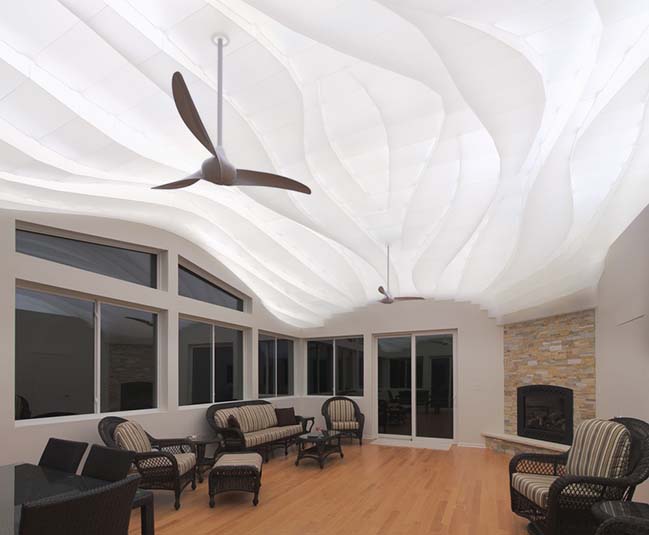 Fabrication Efforts
Once the sunroom’s shell was constructed, the architect relocated across country to the project site. Working together, Flynn and the client fabricated and installed the entire ceiling sculpture. Pre-drilled plywood panels were painted and filled with over 1,200 eye bolts. The plywood was then fastened to the underside of the roof rafters and 5,000 feet of suspension wire was attached. 128 clear acrylic panels hang below and support over 29,000 LEDs connected by 7,000 feet of electrical wire. Using custom bending tables, 397 uniquely shaped, CNC-cut, translucent pieces were thermoformed on individual angles. These were hung within a 1/32" tolerance to complete the ceiling. 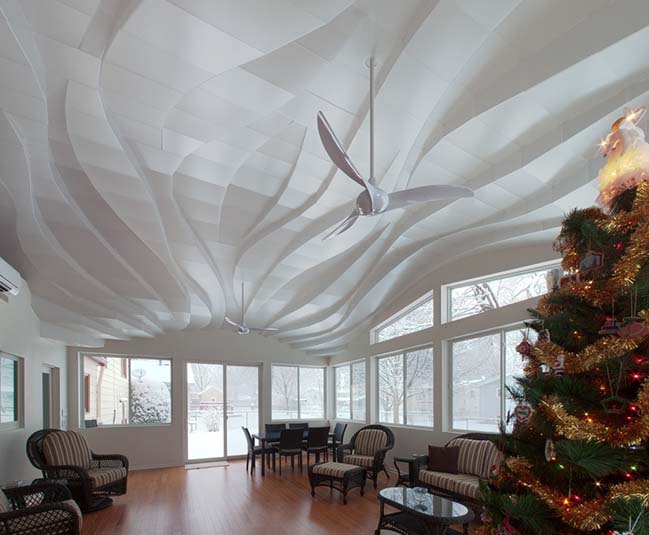 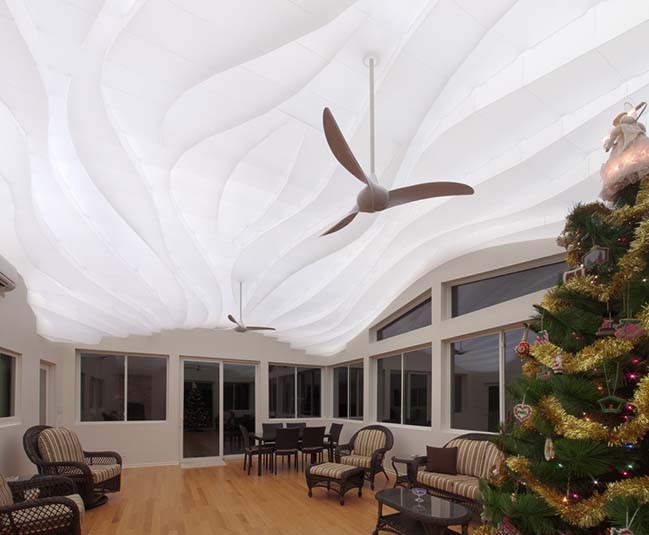 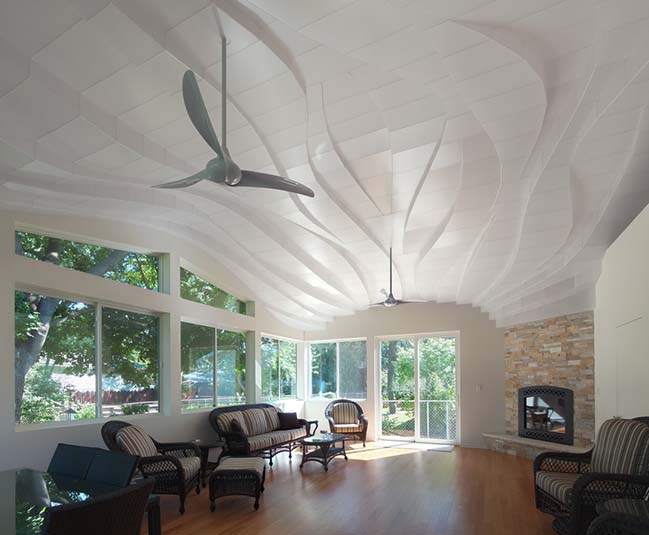 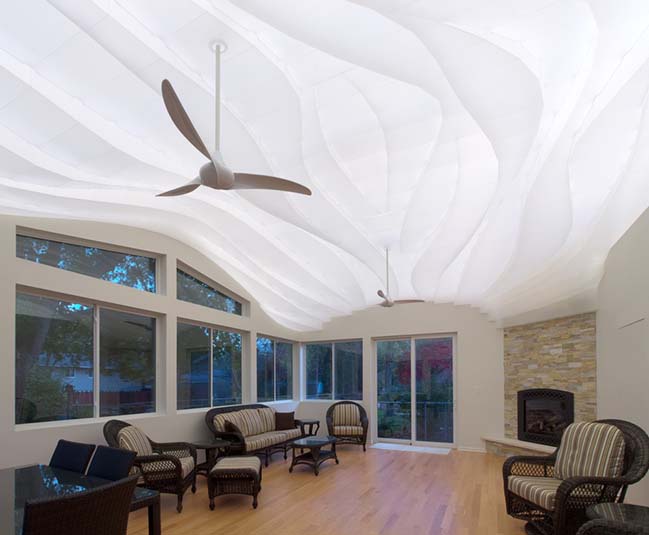 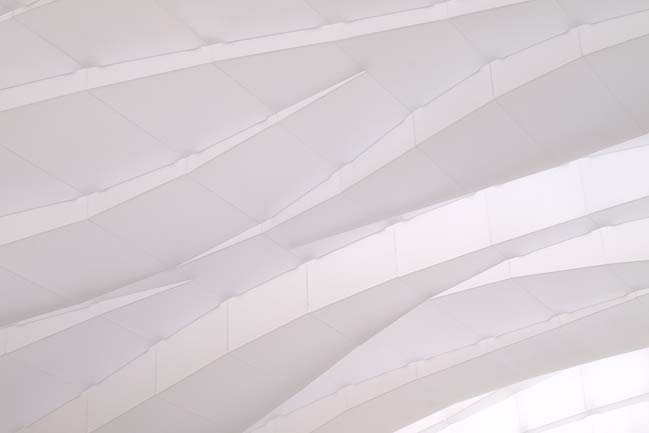 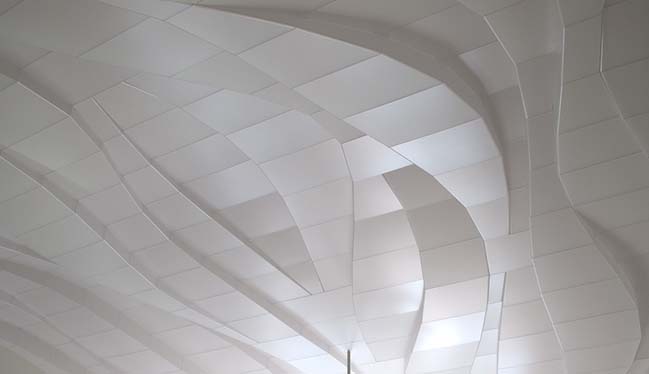 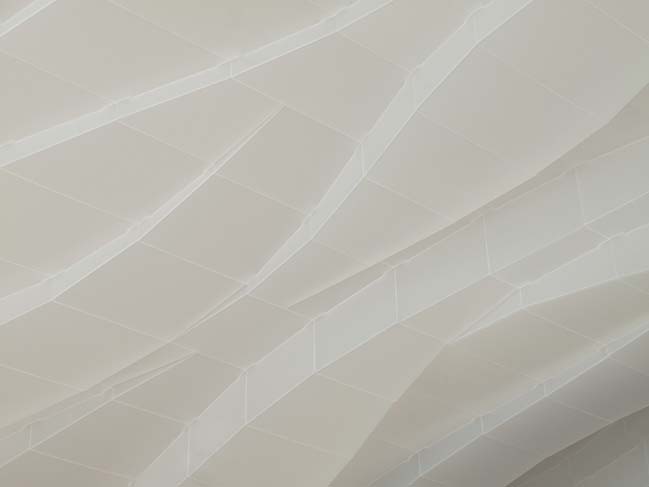 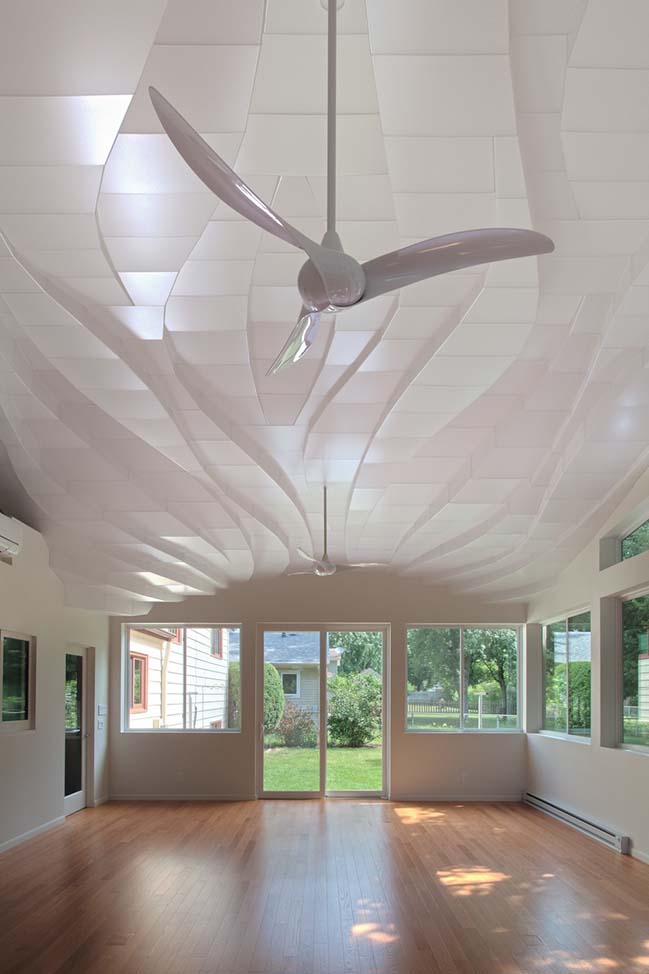 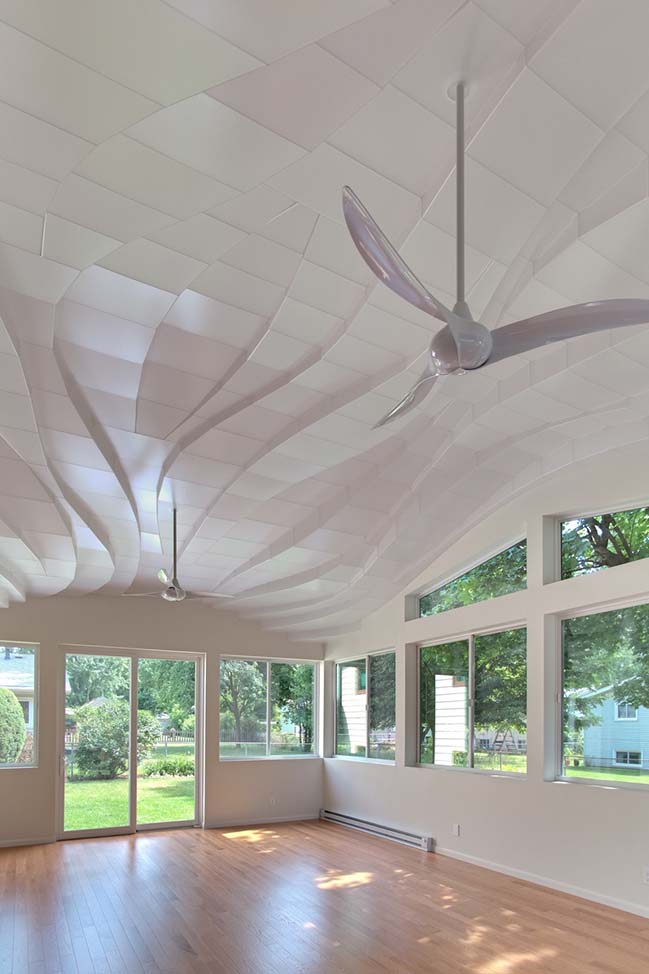 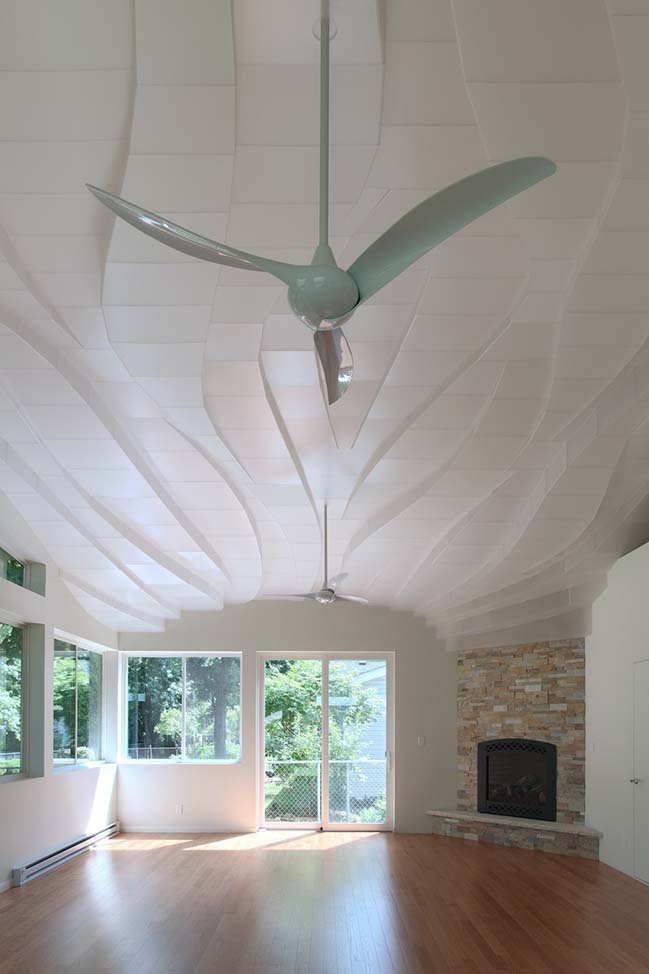 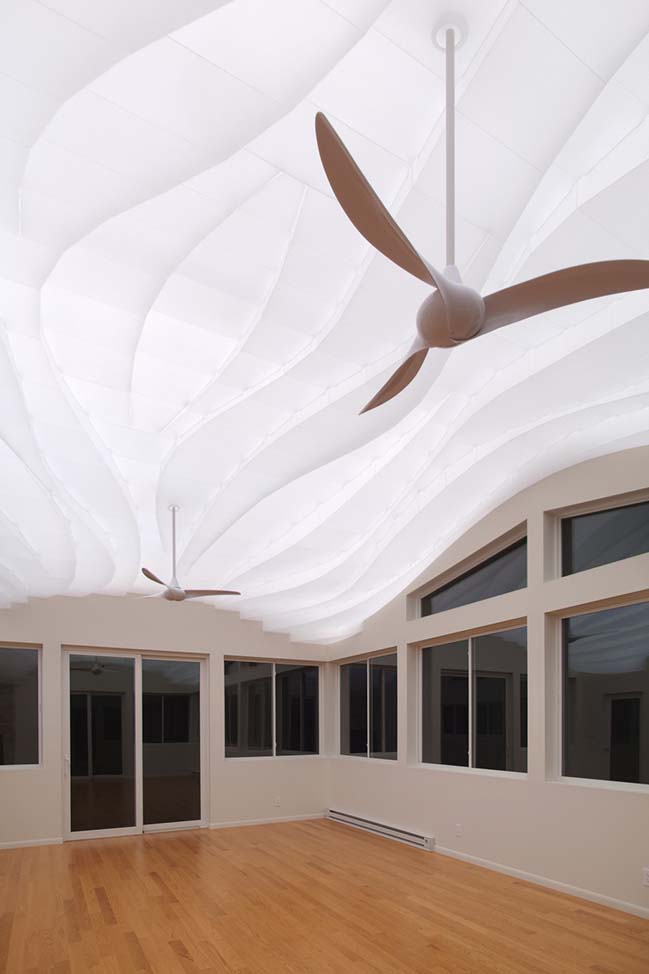 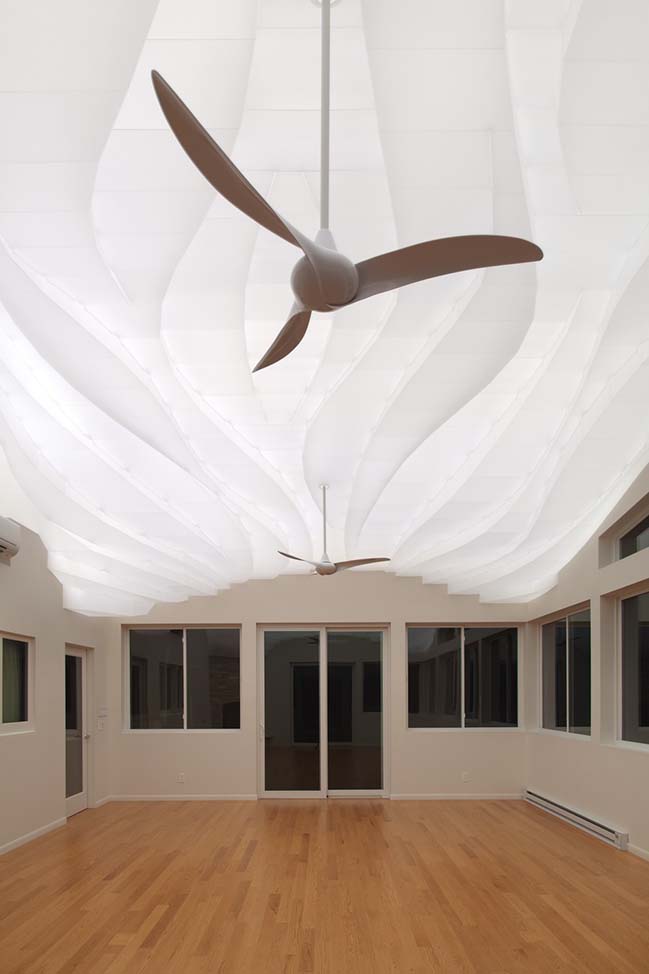 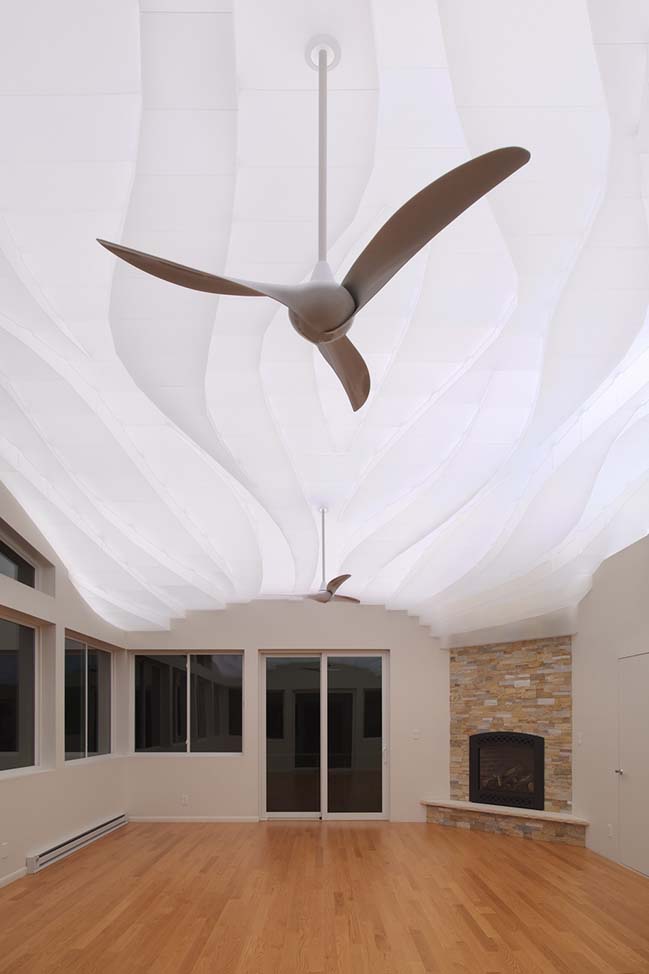 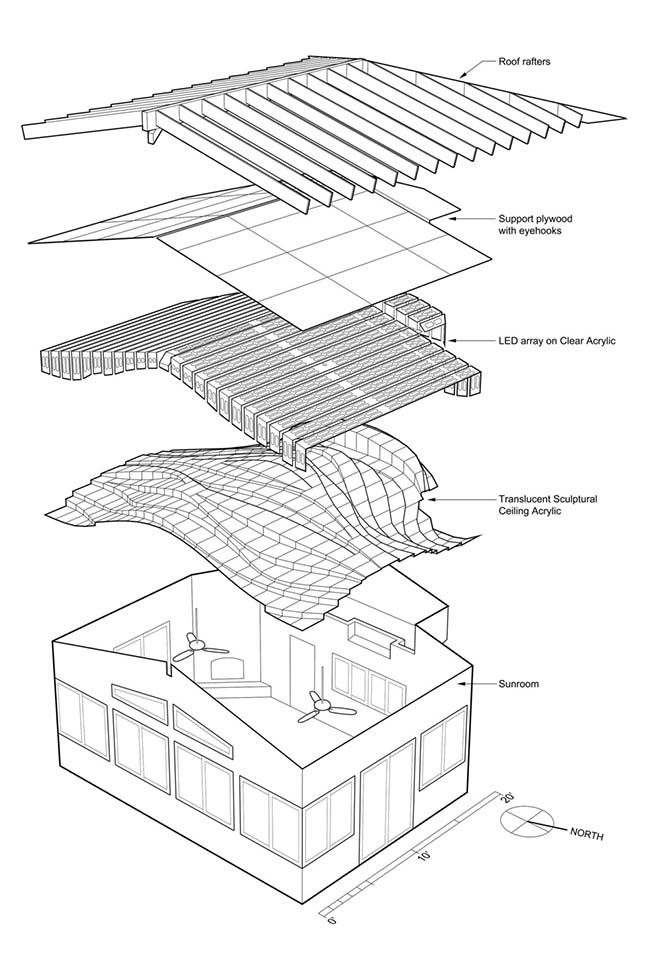