The Open House is a contemporary addition to a traditional mountainside family retreat. Located in Abadieh, an hour drive from the Lebanese capital Beirut, this mountain village is a seasonal home for residents escaping the city’s summer heat and humidity. 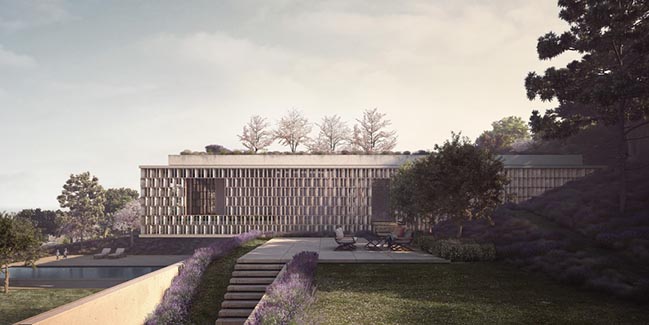 From the architect: Construction is strictly regulated by building codes not updated for more than seventy years. The open house carefully challenges existing rules to propose a new courtyard-house typology inspired by the spatial logic of the traditional Lebanese House. The aim of the design is to better integrate the house with its natural context and re-invigorate the existing landscape to further enhance familial and social relationships. 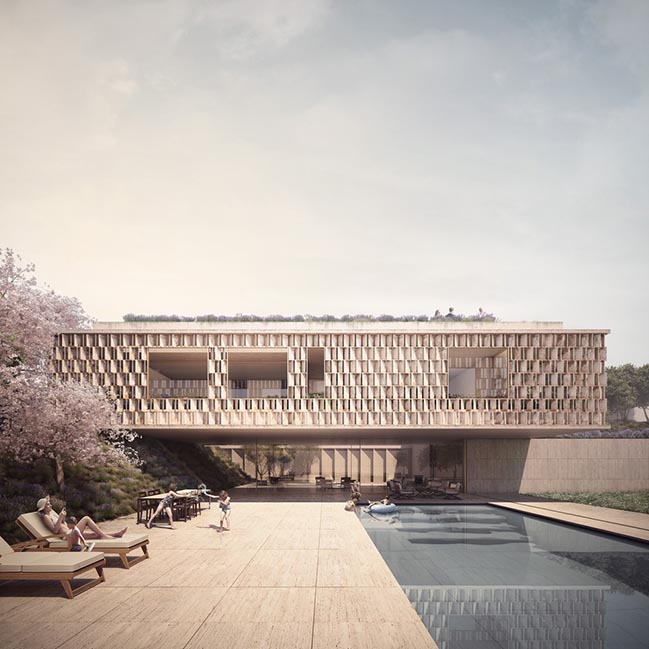 Alternatively, the Open House embraces historical context by emphasizing the history of space rather than style.  Instead of adopting stylistic elements of columns, architraves and arches the Open House re-interprets key spatial elements of traditional architecture and its relationship to nature. Public living space, the organizing agent of a traditional Lebanese house, is thus transformed into an expansive interior courtyard. Local stone is incorporated into a translucent parametric screen to reflect the summer sun during the day and radiate warm light from within at night.  And most importantly, connection to the natural setting, pivotal to traditional Lebanese architecture becomes the guiding principle of design. 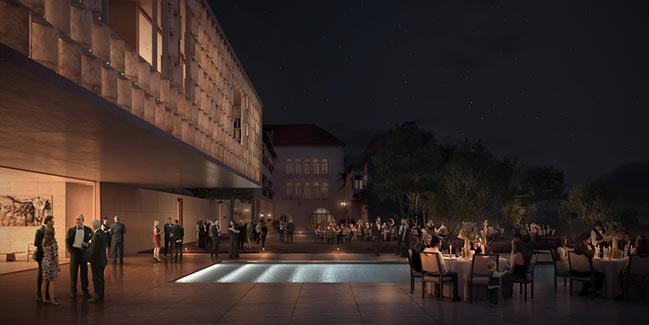 While building code strictly stipulates red tiled roofs evoking the Italian countryside, the Open House limits itself to two stories and eliminates the construction of a third floor with its adjoined pitched roof. The minimized scale of the house seamlessly integrates within the topography of the hill and replaces an unusable pitch roof with a green rooftop terrace. The punctured terrace serves as an extension to the interior gardens and courtyard and acts as both a green visual extension of the surrounding hills and a perched viewing platform overlooking the sea.

The house, an open and airy volume, rests on the existing terraced gardens and cantilevers over the natural retaining wall. The house liberates the ground floor from any construction. A column free span of more than eighteen meters and a living space flanked by floor to ceiling glass on both sides emphasizes the transparency between indoor and outdoor. The relationship with nature is furthered as glass slides and vanishes completely within the green berm.  This same green berm plays a structural role as it extends deep into the living space and replaces typical structural walls and columns. Instead of merely acting as an extension, nature becomes an integral component of the architectural and structural logic of the house. With no visual or physical constructed barrier, the surrounding landscape is invited into the living space and deep into the hearth of the house: the interior courtyard.

The courtyard also acts as a spatial pivot as it extends into the first floor revealing a series of visual connections between all levels. The hovering volume with its translucent skin is exposed to the outside elements allowing light and air to filter in. It shelters an internal garden that overlooks the courtyard, a canvas for a free and flexible organization of the plan. Nature now infiltrates the house as glass bedrooms float within this interiorized landscape.

The Open House pays homage to the historic dimension of place through materiality, scale, relationship to nature and its re-interpretation of past spatial concepts.  The integration of the landscape within the fabric of the house, forms a unique synergy between the existing and the new, the exterior and interior. From the expansive outdoor garden that extends into the living space and interior courtyard, to the more intimately shaded outdoor terraces, public spaces of different scale engender lively encounters and communal interactions. This fosters healthier family dynamics and greatly enhances social relationships. The Open House, by carefully reworking existing building code, presents a new typology deeply rooted in context and history, deepening human relationships. 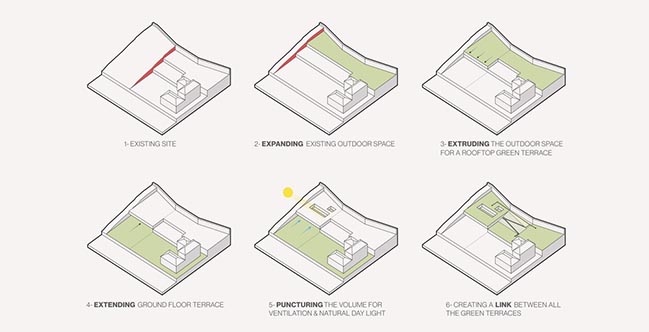 YOU MAY ALSO LIKE: Luxury penthouse in Beirut by Domaine Public Architects 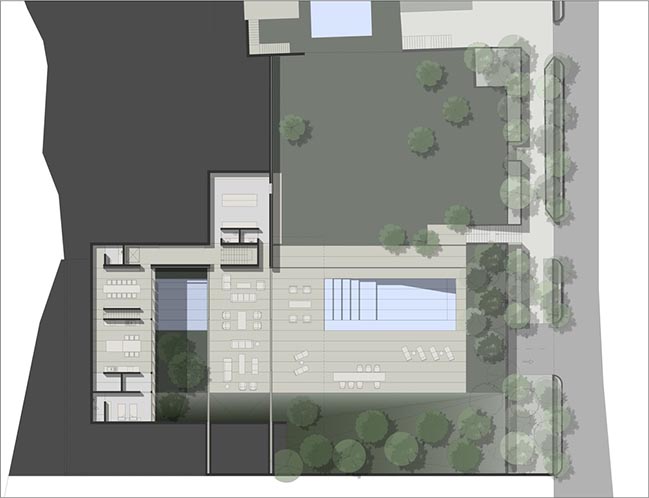 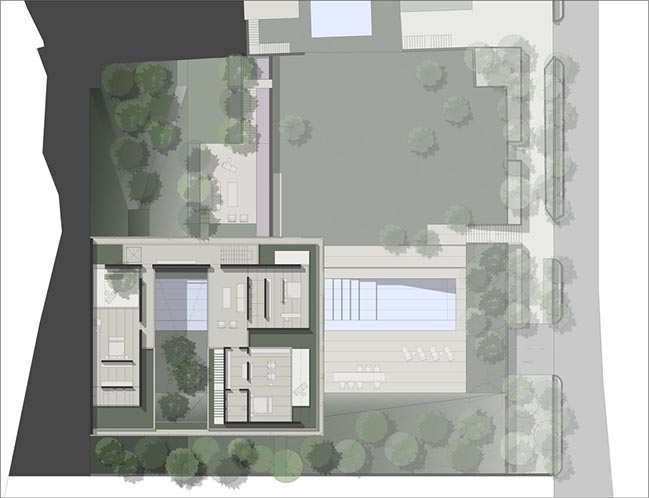 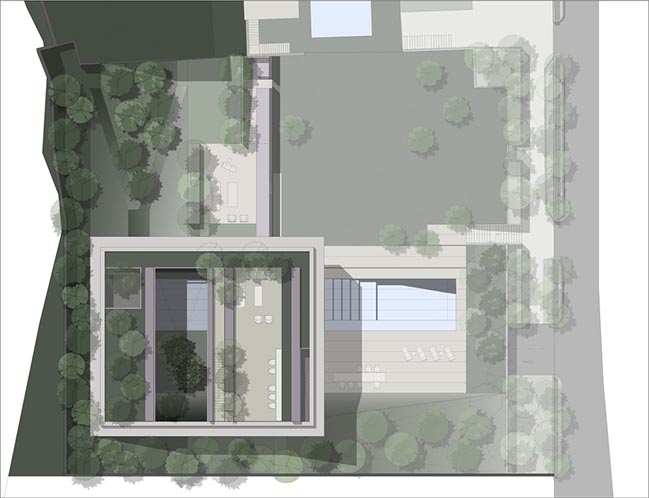 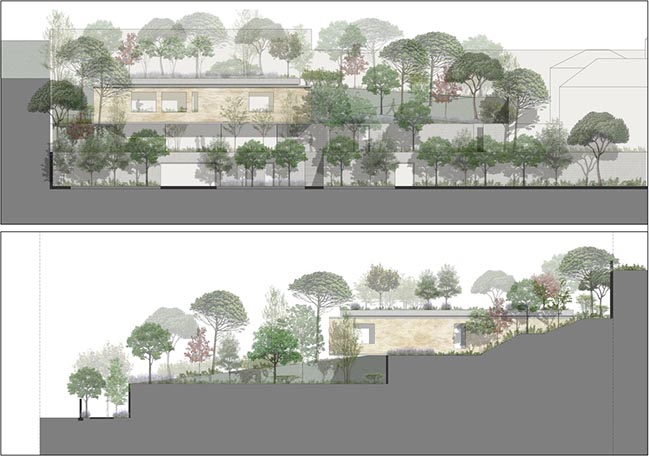 02 / 17 / 2019 The Open House is a contemporary addition to a traditional mountainside family retreat. The open house carefully challenges existing rules to propose a new courtyard-house 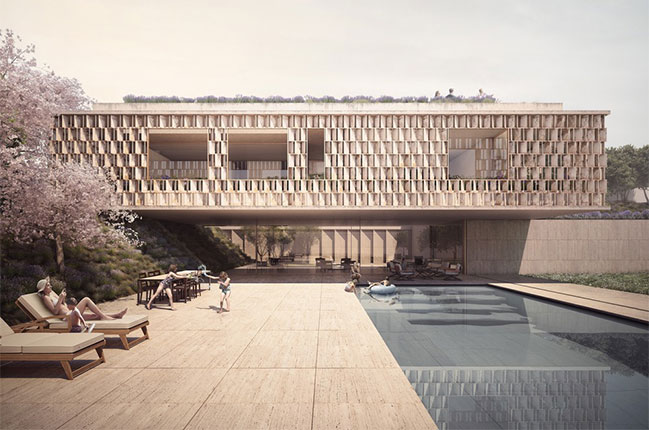