Located in the heart of the Plateau Mont-Royal district in Montreal, the Monument project explores an architectural orientation that allows the design of bright and open residential spaces in a structure formerly dedicated to manufacturing and warehousing; while ensuring the conservation of the urban heritage in the conversion process. 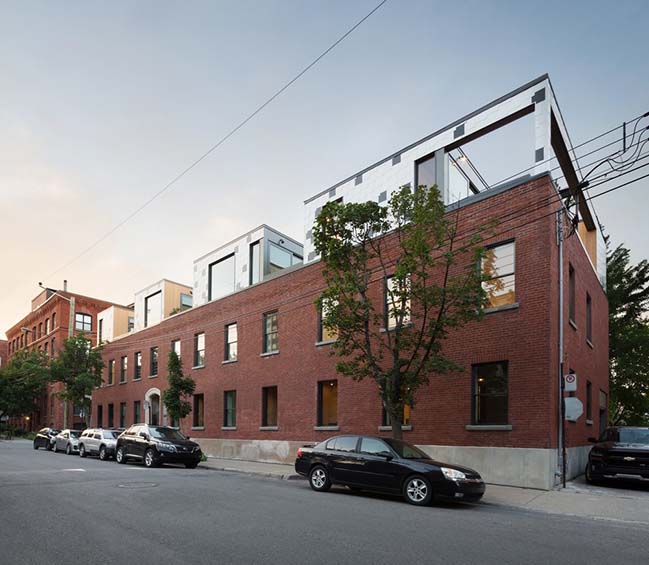 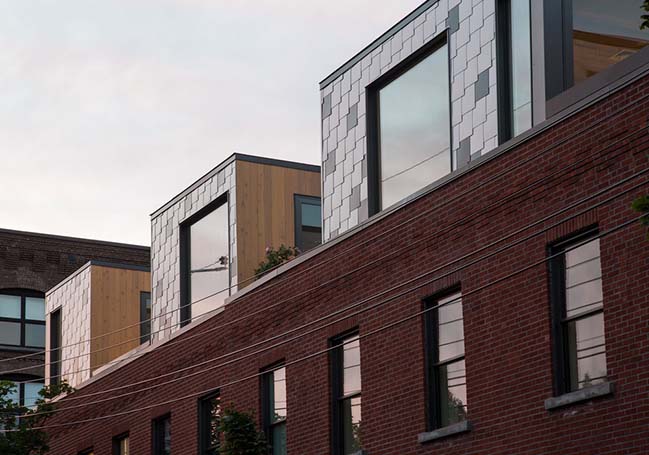 From the architect: The original building was built in 1905 at the corner of Colonial Avenue and Demers Street to host the manufacture for “The Saint Louis Preserving Company”. The former, whose architectural details are reduced to a brick decor imitating machicolations at the cornice and window coping of segmented arches, is brick-clad. In 1912, the manufacture was enlarged by the addition of a new wing. The company, which remained active until 1924, mainly produced jams, jellies, marmalades, pickles, hot sauces and syrup extract. 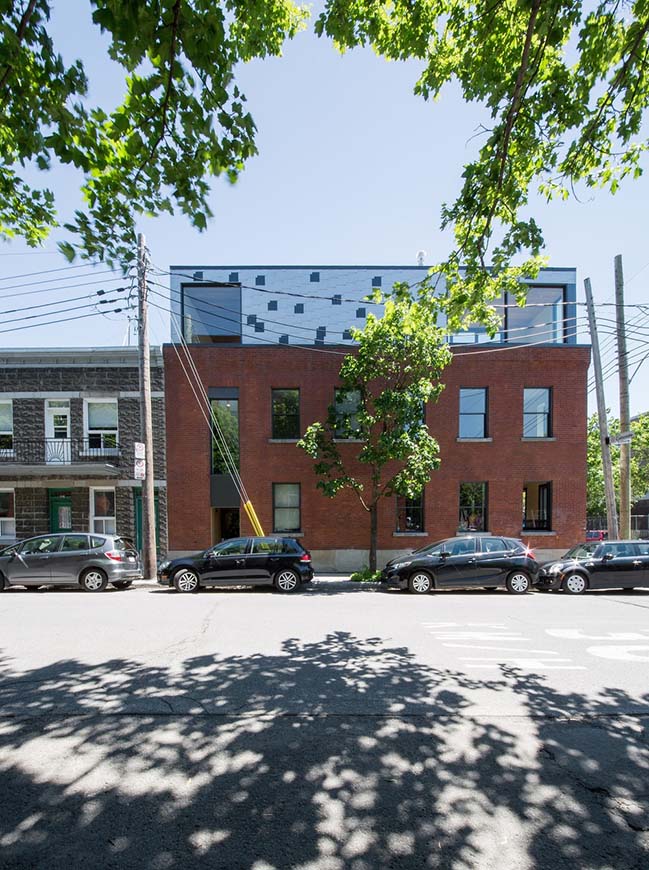 In 1927, the lingerie company “Grenier” took over to install its manufacture and an important addition is built in 1933. This was carried out according to the plans of the architect Joseph-Zéphirin Gauthier, which unify the different parts of the building in a new façade. The latter, in brick masonry, is punctuated by a regular arrangement of the fenestration, composed of a rectangular window, which is interrupted by the semicircular opening of the entrance. The company will leave the 4835 Coloniale in 2012. 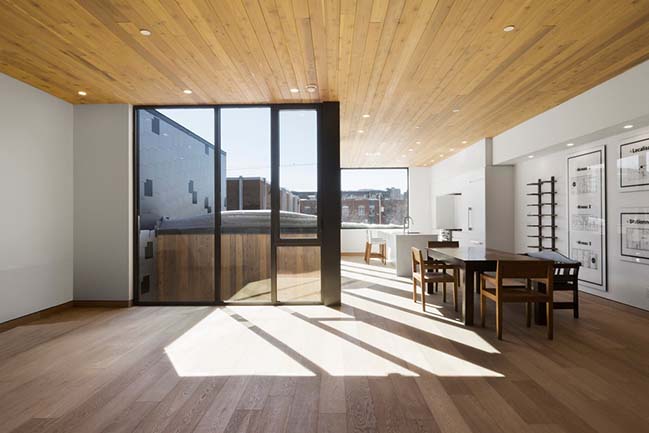 The original building consists of two floors and a basement. Its structure is mixed; steel beams and columns, wood joists and some concrete floor parts. 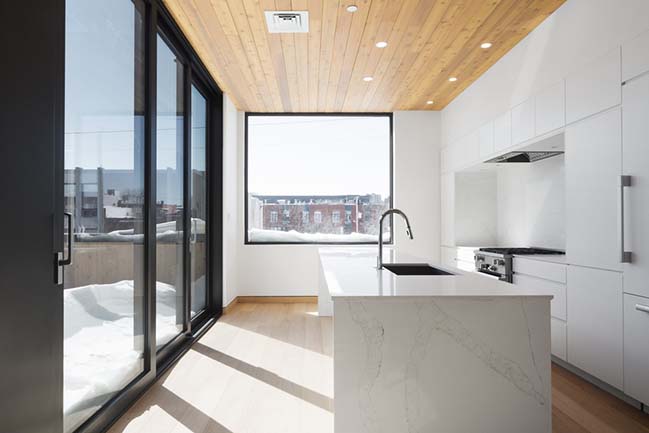 The strategy consisted in limiting interventions on existing enclosure and floors, add a fragmented level to the roof and puncture a few openings in the existing frame to increase the natural light penetration all the way to the centre of the volume. The new layout comprises seven (7) units and parking spaces in the basement. 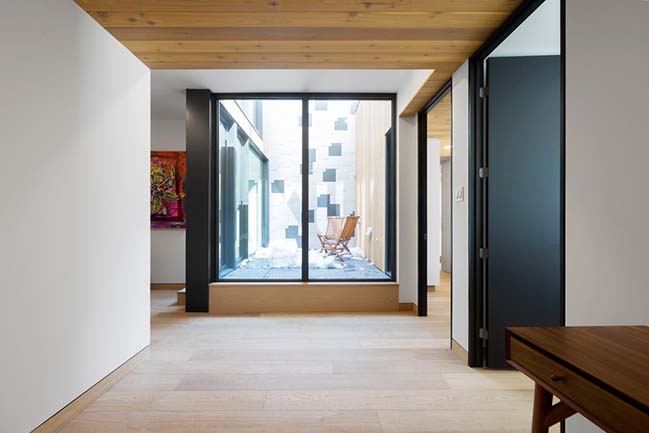 The three (3) units on the ground floor benefit from numerous openings on the outer perimeter. Some of the openings simulate the effect of a window from the outside, but a fully wood-finished loggia is actually fitted behind the enclosure. The integration of the mechanical systems and the structural strengthening for the interventions of the upper levels are concealed within the ceilings through their treatment. Although the heights are different, the alignment and continuity of the wood finish of the exterior soffits inwards accentuate the size of the spaces. 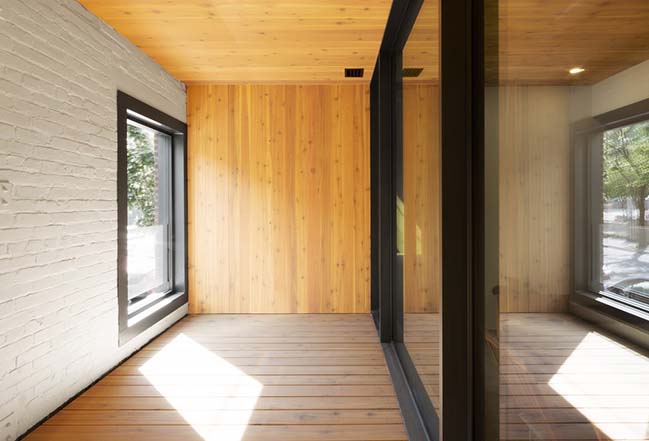 The second and third floors are occupied by 4 units; 4 town houses with courtyards and terraces. At the lower level, the bedrooms, bathrooms and an office are organized around the courtyard carved into the existing structure. The living spaces occupy the expansion on the third floor. Each of the units has its own private terrace favouring views toward Mount Royal and the Montreal landscape. The height of the 3-meter ceilings and generous glazing flood the units and interior spaces with natural light. 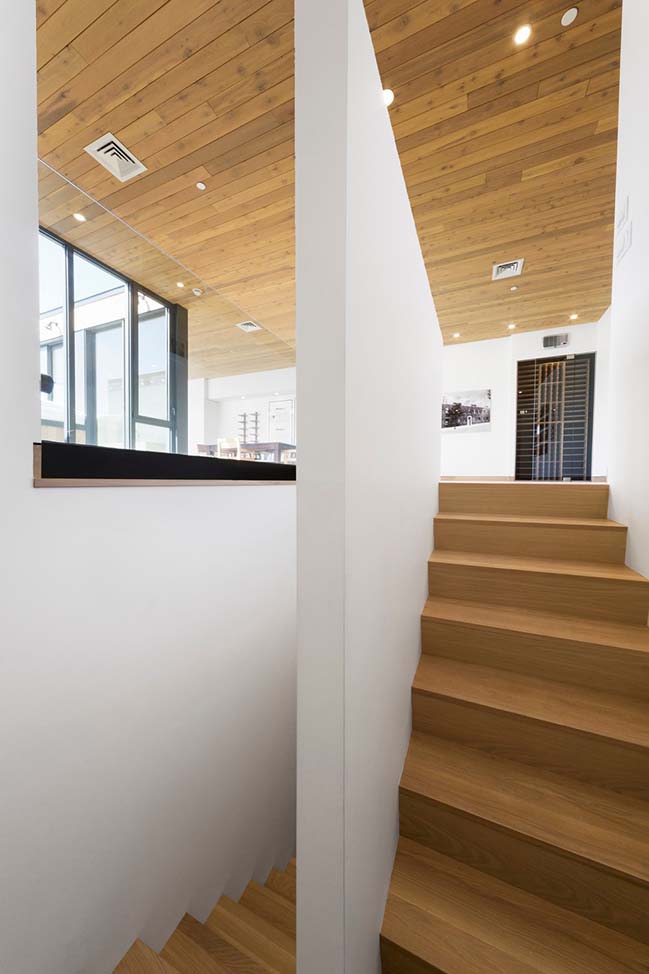 Wood siding is the cladding material for the interior of the courtyards and the terraces, creating continuity with the interior spaces where the same material is found on the floor and the ceiling. 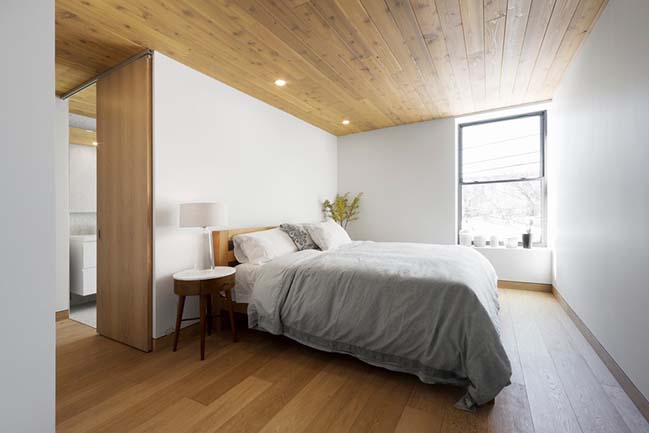 The envelope of the addition is treated like an attic in metal cladding. From the inner courtyards, the aluminum pellets of contrasting colours transform to a more random pattern that accentuates the effect of depth and brightness as reflected by the building envelope. The expression behind the flakes is also a nod to “Grenier”, the lingerie company that has occupied the building for over 80 years. 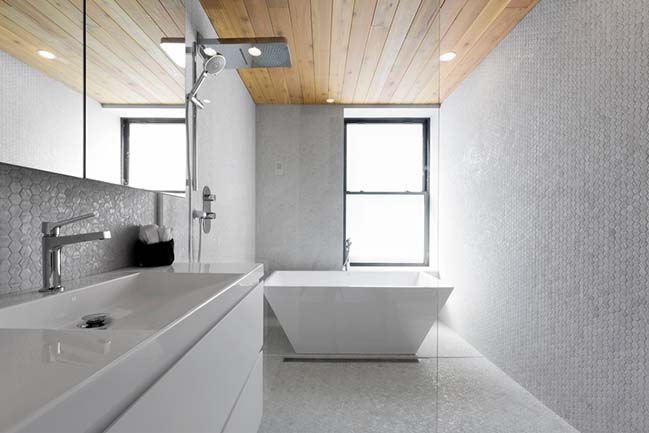 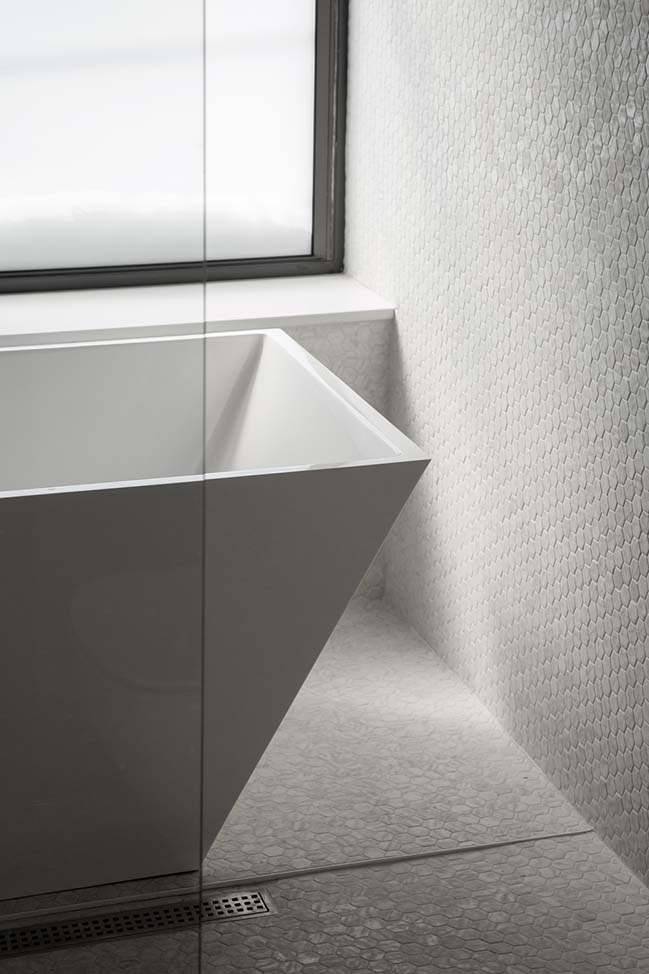 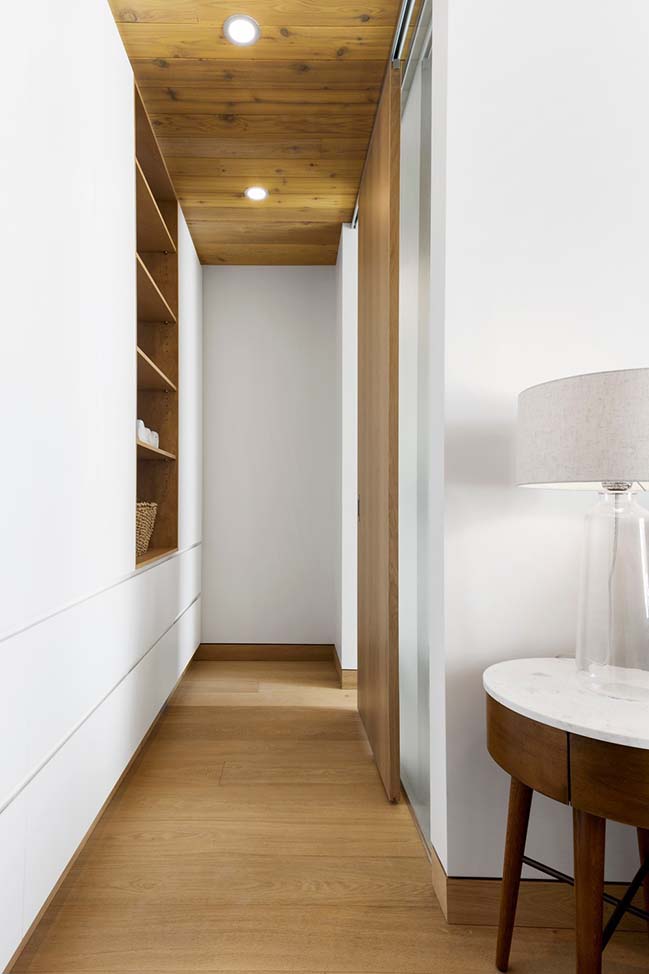 > You may also like: A High-End Golf Clubhouse in Montréal by Architecture49 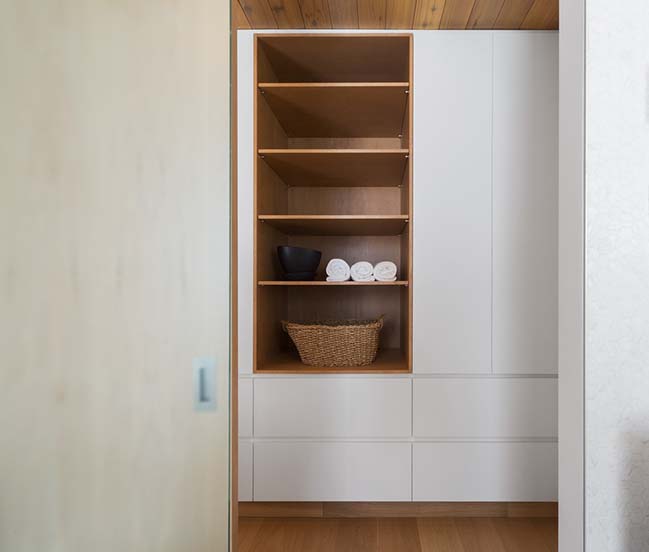 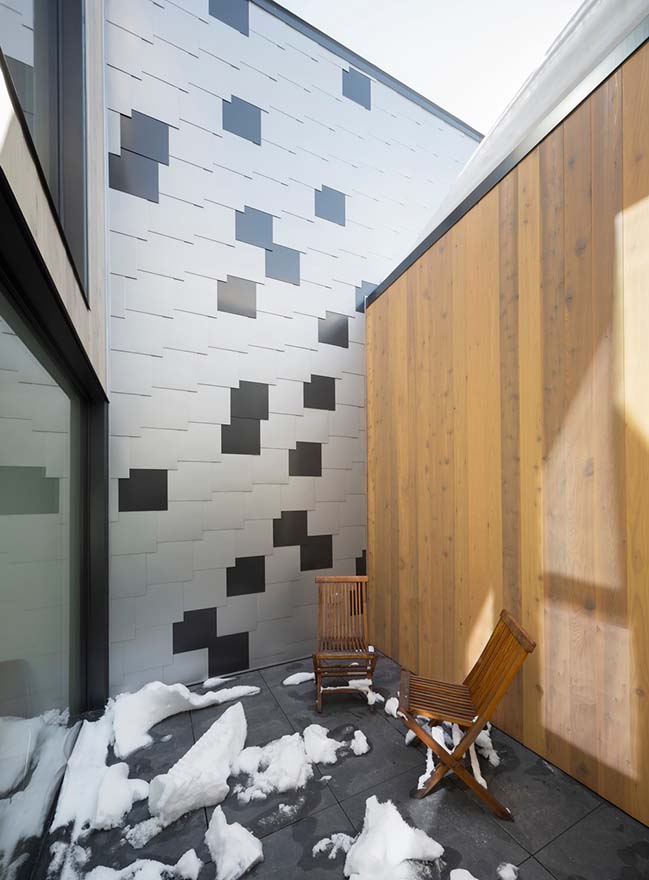 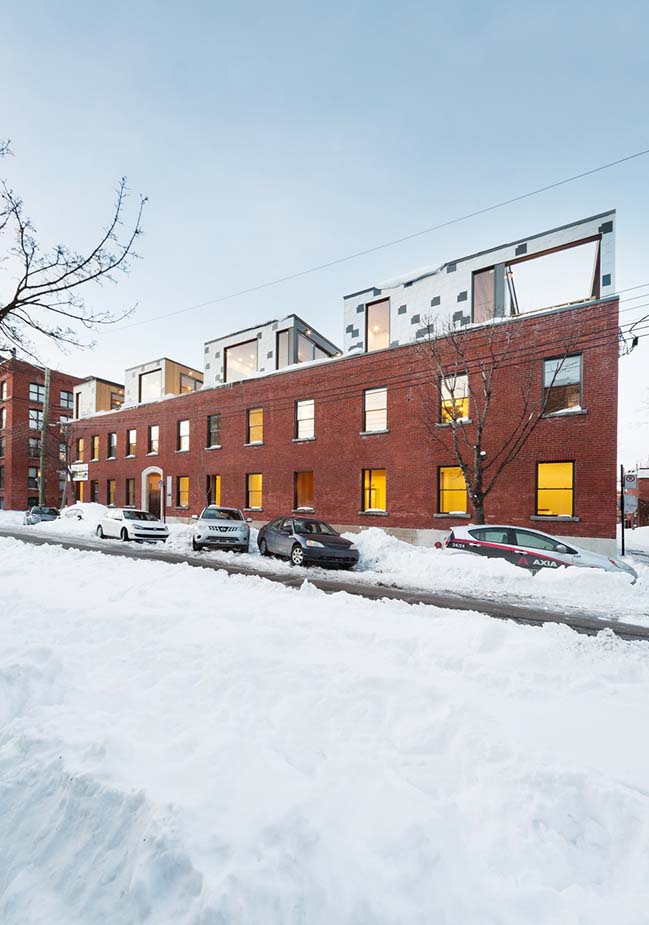 > You may also like: A New Silhouette for the Montréal Tower by Provencher_Roy 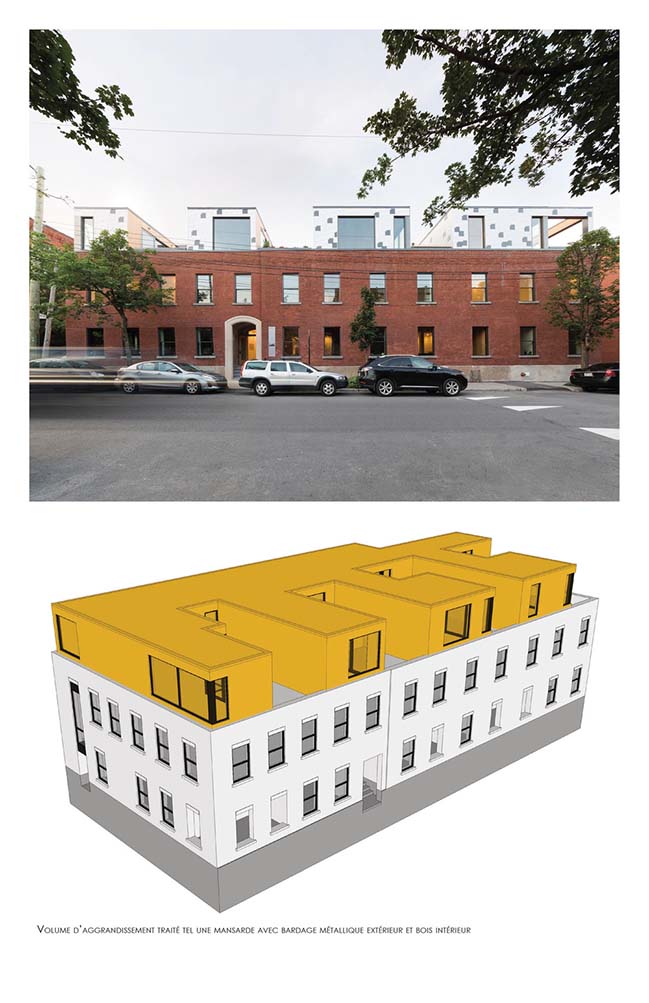 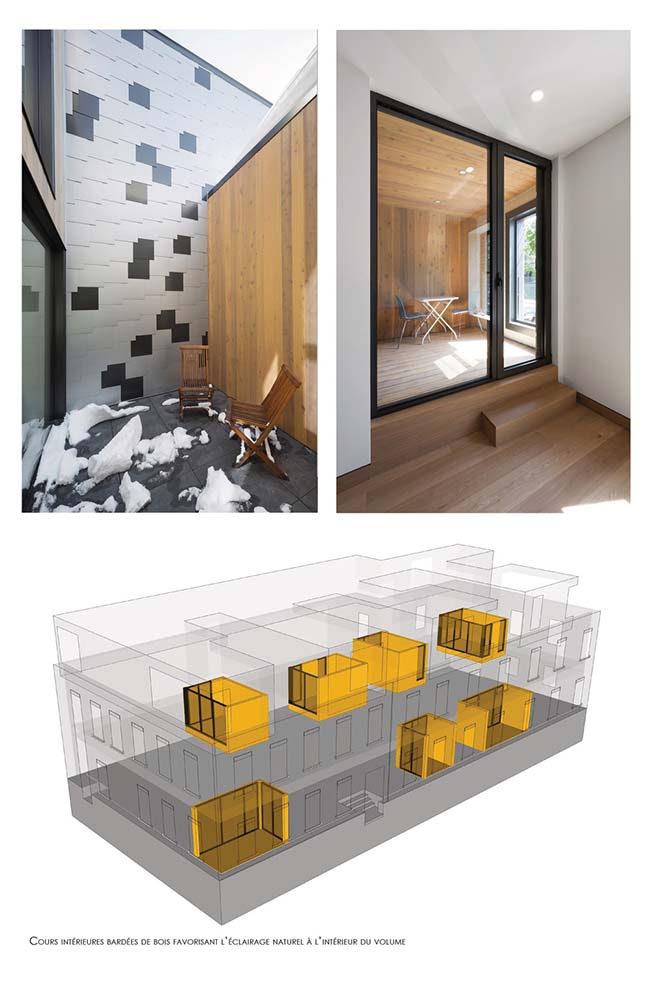 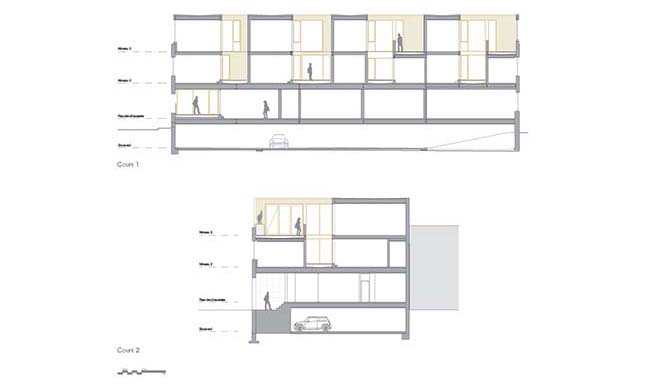 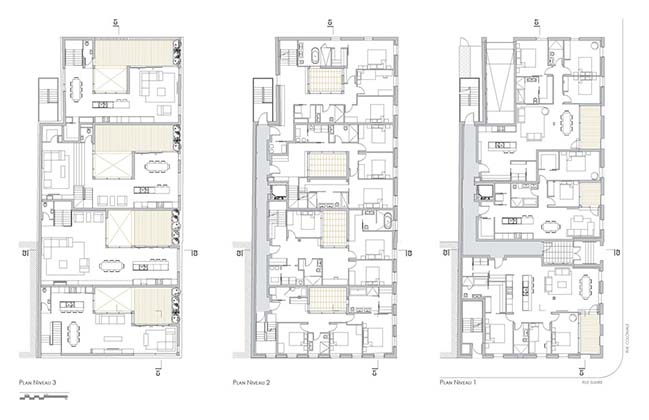 10 / 25 / 2018 The Monument project explores an architectural orientation that allows the design of bright and open residential spaces... 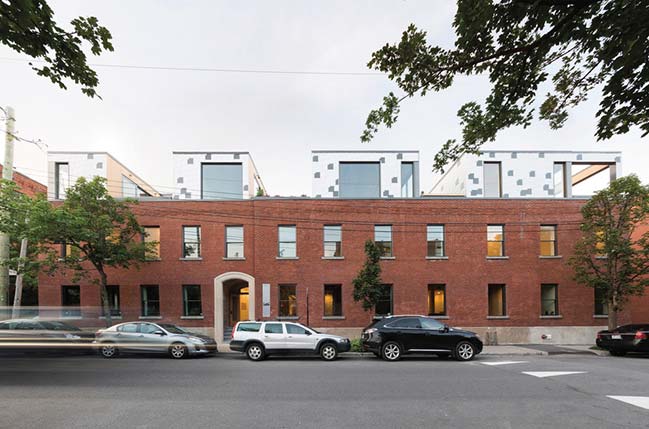