The hotel is located in Makran, it is home to the strategically critical port of Chabahar, which sits in the vicinity... 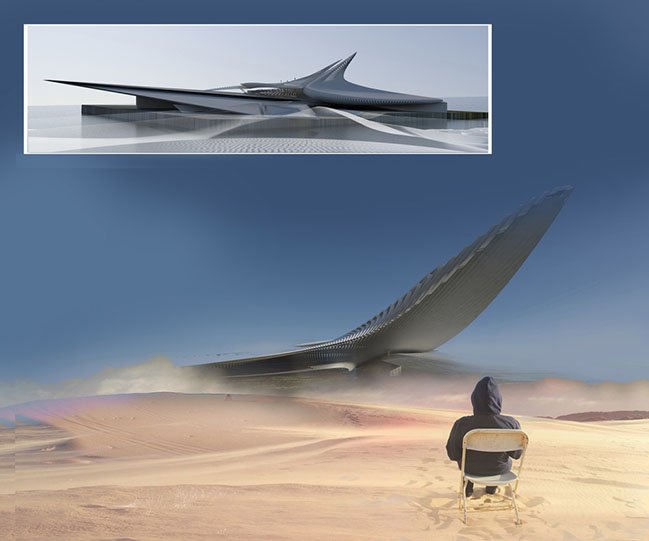 From the architect: The hotel is located in Makran, a semi-desert coastal strip stretching from south-eastern Iran to Pakistan’s Baluchistan, and bordering the coasts of the Persian Gulf and the Sea of Oman. It is home to the strategically critical port of Chabahar, which sits in the vicinity.

The hotel will make use of an existing, yet currently redundant qanat, with the aim of repurposing it as part of the hotel’s infrastructure. 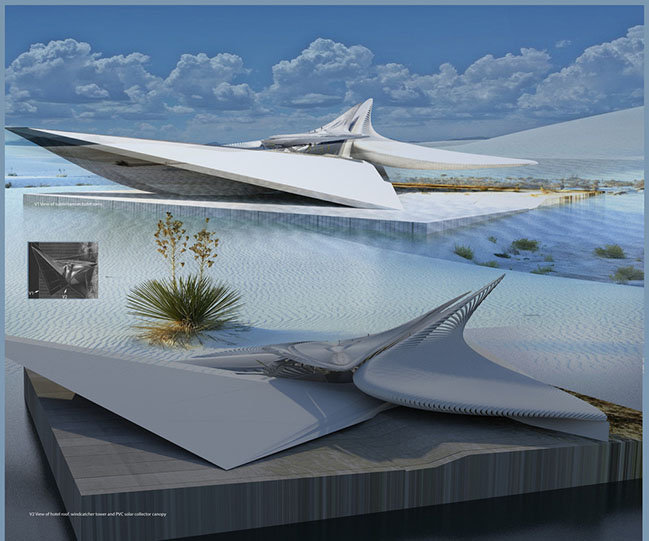 This hotel project envisions an eco-tourism resort that focuses on the context's environmental conditions, which is used to inform the design process and the architectural strategy. The main considerations are that of using wind, heat, and aquifers to design a modern wind tower and Qanat system, referencing the traditional Persian construction methods used to cool and ventilate desert buildings by circulating and recycling warm, arid desert air. The hotel appeals to ecologically and socially conscious individuals, where the primary attractions are cultural heritage, social, economic, and environmental needs that are prioritized to ensure sustainable development. 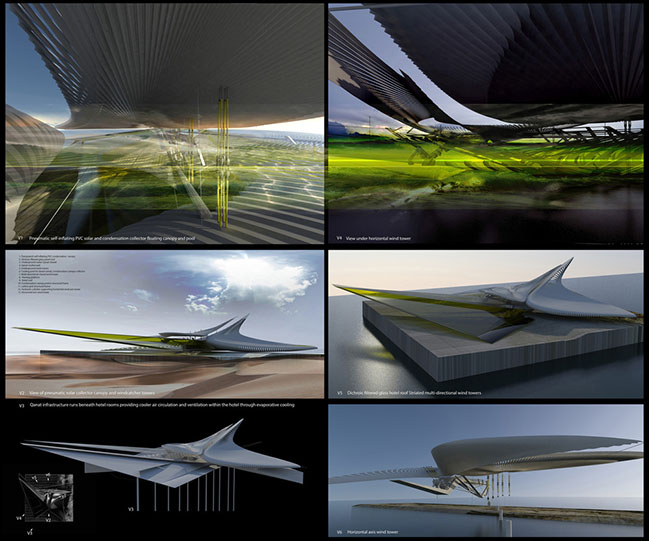 Ecotourism prioritizes programs that reduce the negative conditions of conventional tourism and its effects on the environment by encouraging and integrating the cultural integrity of local people. Recycling, renewable energy, and sustainability establish economic opportunities for local communities by using architecture to define and introduce new cross-programmatic typologies. 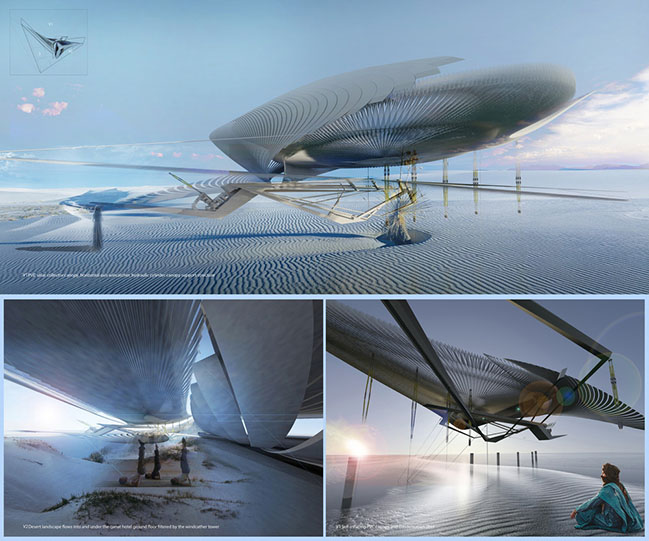 Due to the desert’s arid environment, four address areas were identified and used as part of the design criteria, which include windcatcher towers for ventilation, as well as to assist evaporative cooling, solar collectors for high to low-frequency radiation conversion, and a Qanat infrastructure to further service agricultural irrigation efforts and building interior cooling methods. 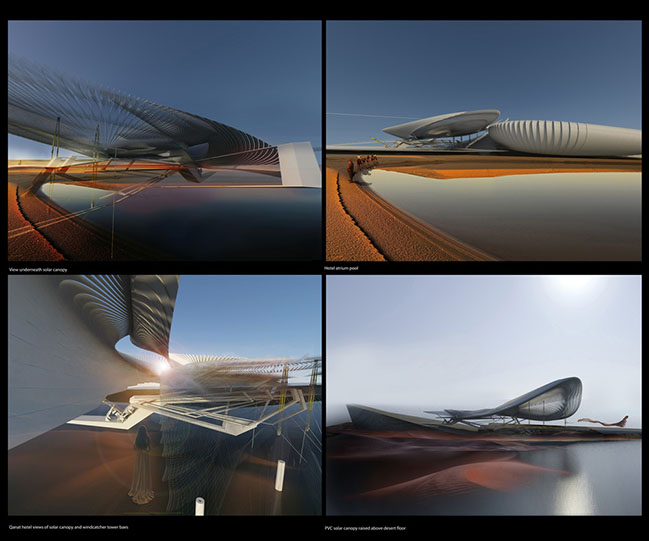 The hotel provides shelter, as well as a hospitable environment in a varied and environmentally unpredictable landscape. The temperature fluctuations and environmental diversity make it a challenge to survive comfortably. That led us to refer to ancient Persian technological methods of survival, leveraging aquifers and water wells to transport water across the desert to introduce water as fountains and interior pools in the hotel’s atrium and subterrain, using evaporative cooling to lower the temperature throughout the desert hotel. 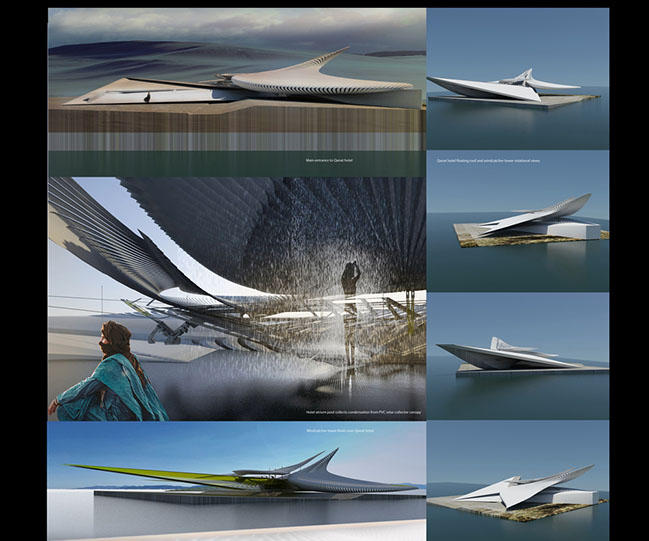 The striated towers rise tall above the cooler desert floor, catching warm air and transporting it into the hotel's lower ground floor, which cools the air as it passes over pools of water using evaporative cooling. A PVC solar collector canopy is suspended over one of the hotel’s atrium pools, featuring complex PVC cylindrical sections with a reflective inner surface. This allows for the canopy to rise higher above the desert floor, in turn collecting condensation. This condensation is then released into the evaporation pool below it, while transforming high-frequency radiation into low. Light energy from solar turns into heat, which expands the air trapped in the PVC solar collector and causes it to rise from the ground to provide shelter from the sun, and to generate electrical currents using photovoltaic cells and piezoelectric cells. The lower-ground hotel vaults ventilation system is controlled/directed by the PVC canopy and the windcatcher towers above ground. The pneumatic PVC canopy rises and falls in the process, channeling wind throughout the hotel. The canopy can also be choreographed by the wind tower which collects condensation from the desert air, filling the underground reservoir and pools to aid with evaporative cooling in the hotel's atrium. The windcatcher tower is clad in striated flexible aluminum and GFRP (glass fiber reinforced panels) material in order to capture multi-directional wind flow. 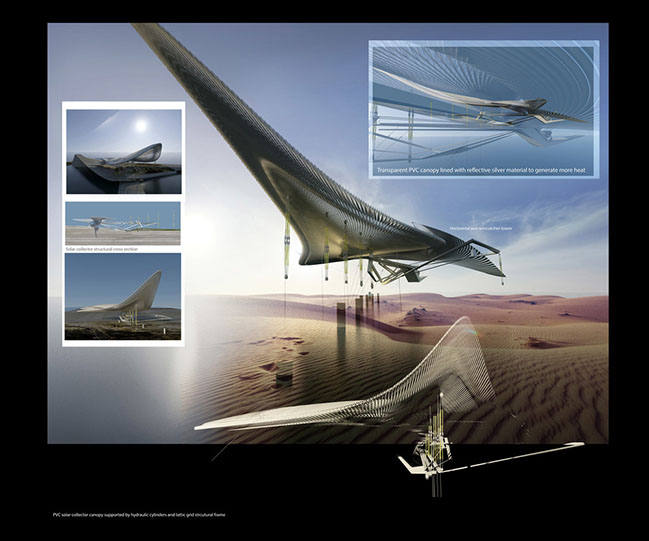 The design also uses an ancient Persian water supply system called a Qanat. Qanats are a series of well-like vertical shafts, connected by a gently sloping tunnel delivering water efficiently over large amounts of subterranean water to the ground surface without the need for pumping. The water drains by gravity, typically from an upland aquifer, with the destination lower than the source. Qanats transport water over long distances in hot dry climates without much evaporative water loss, making desert cultivation achievable. The intention of this project is to programmatically provide support by being a part of the irrigation and ecological infrastructure in Makran. The qanat system is economical and sustainable for irrigation and agricultural purposes. The hotel is located on the route of an existing, yet redundant qanat, with the aim to restore its efficiency and use, enabling the immediate environmental context to become agricultural land, while also flowing underneath the hotel, further cooling and ventilating warm desert air directed into the lower area of the hotel by the windcatcher tower. A qanat can traverse long distances, reaching less populated areas. The hotel encourages this by distributing water throughout its own qanat premises, and with channels travelling further into the desert with the aim of providing more agricultural settlements in more remote areas. This has an urban scale impact, by comparison, to solely satisfying its immediate context and hotel program. 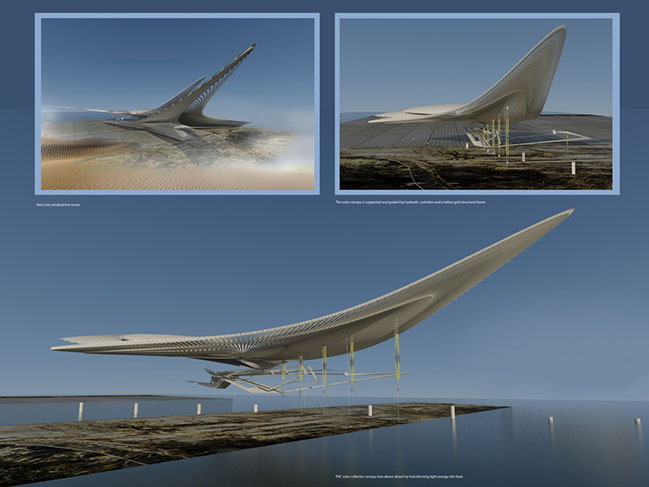 A geometrically complex, transparent PVC solar collector canopy, made of a series of cylindrical collectors (with reference and great respect to architect Graham Stevens and his desert cloud design for Kuwait in 1976), was designed in order to increase surface area in order to more efficiently absorb and convert light energy into heat. The inner surface of the PVC solar collector canopy is lined with highly reflective silver metalized polyester to increase the amount of absorbed light energy and, in turn, its conversion into heat within the canopy, prompting the canopy to rise above the desert and trap condensation. That condensation is filtered into the atrium pool beneath it, while also harnessing more solar energy to convert into electricity using photovoltaics and piezoelectric cells embedded within the canopy. The design is influenced by tent structures used by desert nomads, as well as by semiconductors and current technological advances in micro conductors. 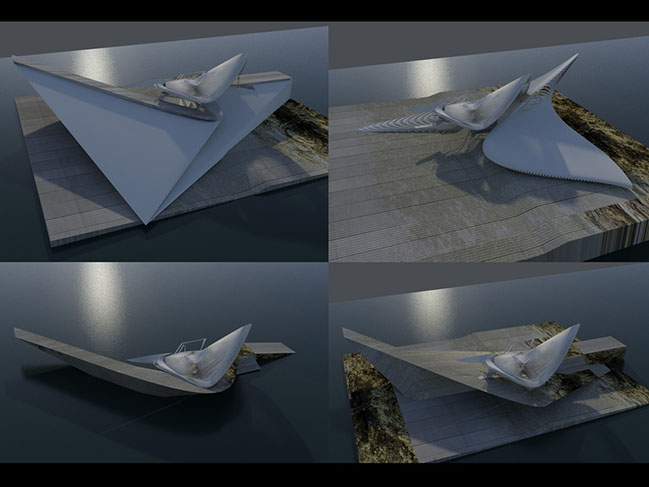 The canopy is tethered to the ground, yet gently drifts and shifts in the current. It is supported by hydraulic cylinders that serve as stanchions, moving with the pressure exerted by the canopy's internal pressure and temperature. 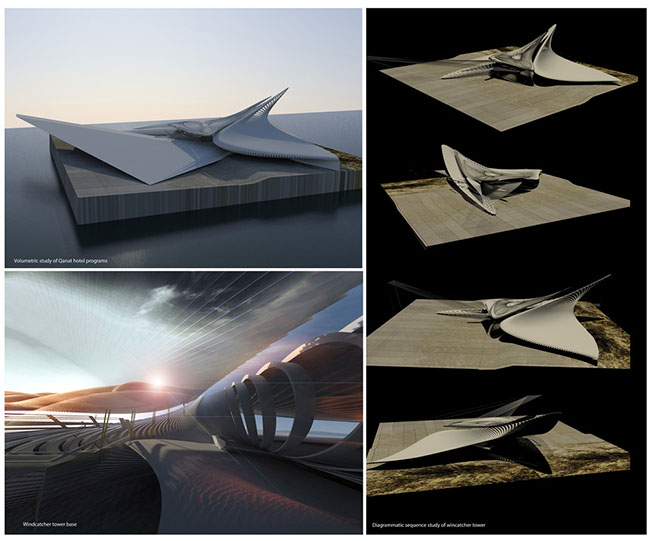 The hotel rooms are partly buried in the desert, and are open to the vaulted underground atriums. Natural light enters through a punctured roof, which serves as a viewing platform and gathering space positioned around the floating canopy. Long corridors circulate cooled air, creating cooler temperatures and sheltering from the harsh desert sun. The qanat runs underneath the hotel rooms, with well-like openings dotted around the corridors. The hotel embraces the process of water drifting gently through the desert subterrain. 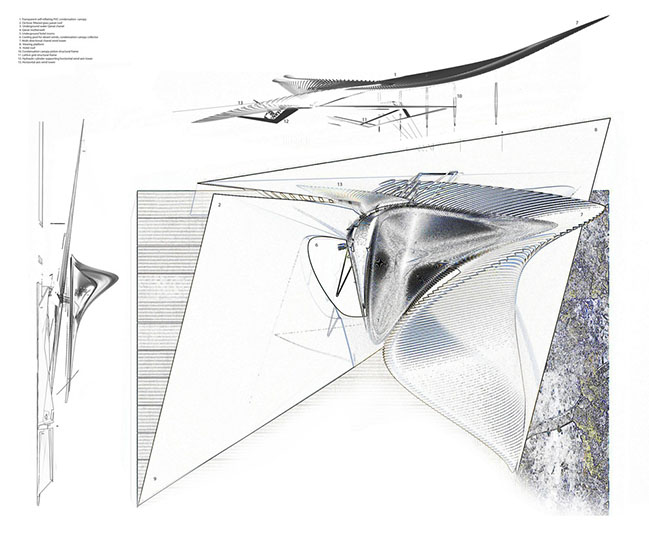 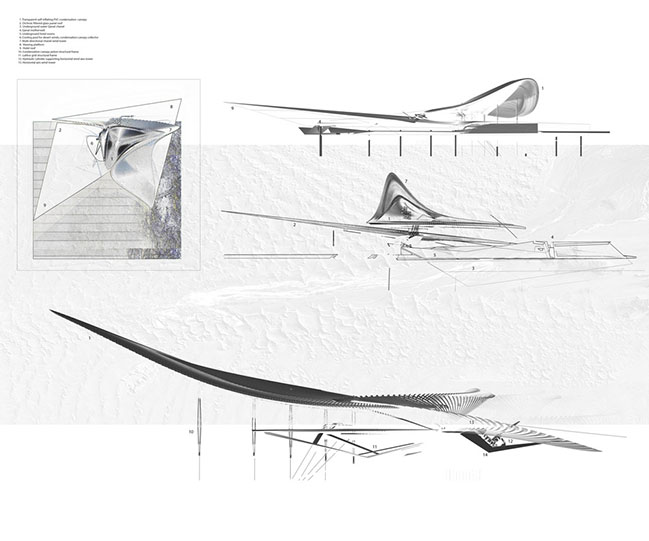 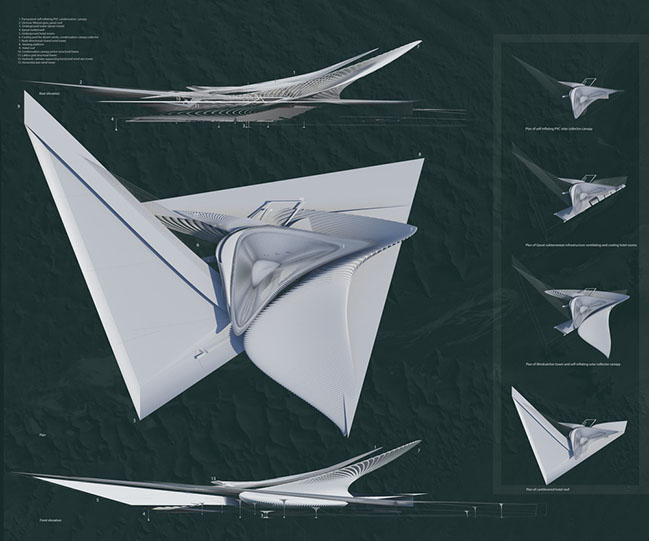 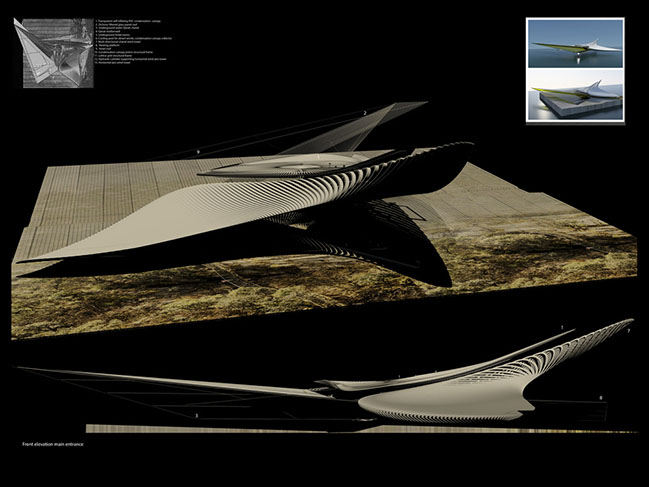 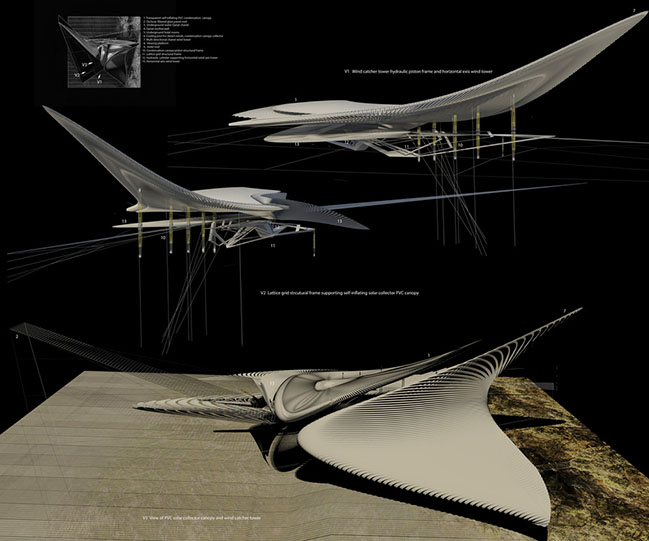 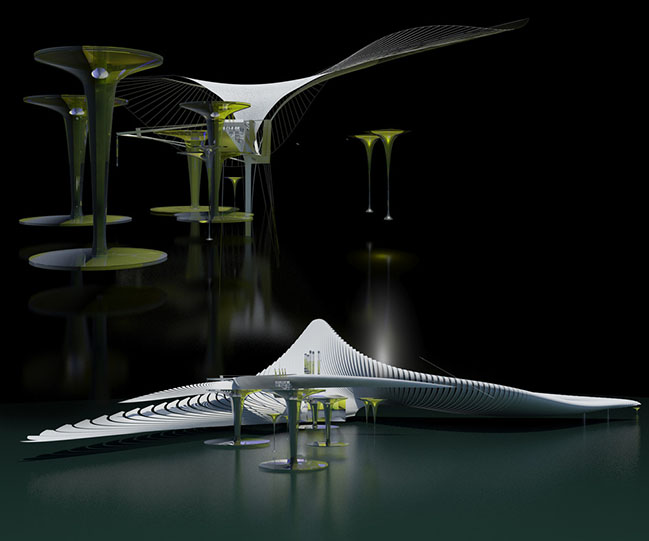 12 / 09 / 2021 The hotel is located in Makran, it is home to the strategically critical port of Chabahar, which sits in the vicinity... 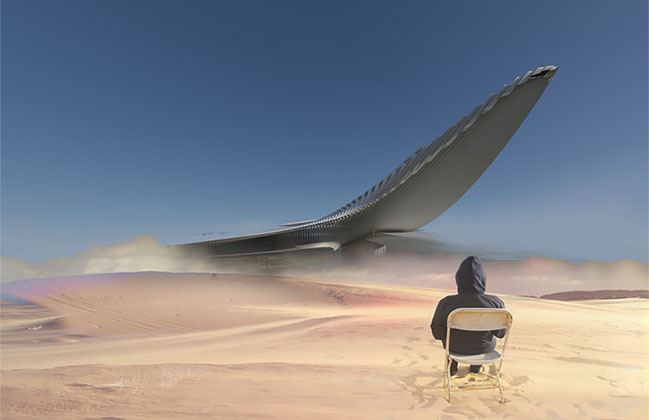