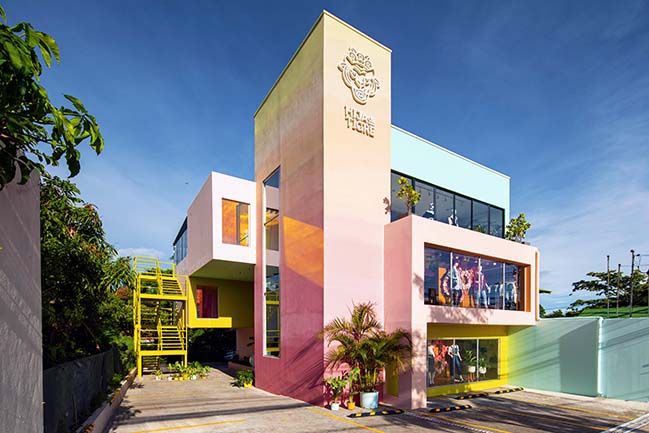 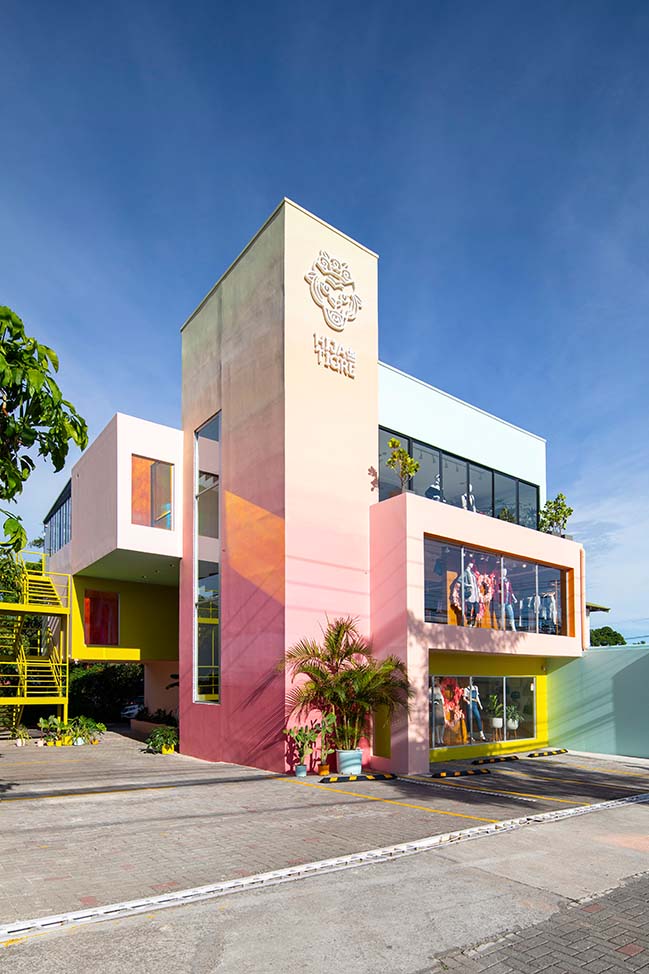 From the architect: The studio renovated an existing building, adding new concrete volumes and updating and defining both facade and interiors with color, as well as designing the interior retail displays and furniture, for the female-owned and female-centric store. Hija de Tigre is run by a mother and her two daughters, with an ethos centered on multi-generational female empowerment. 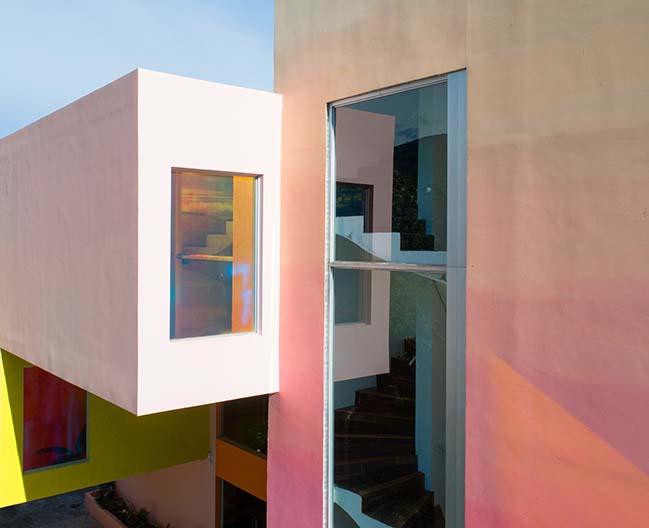 The existing building already consisted of several previous additions. Taller KEN added new elements, including an exterior elevator core and exterior stair, color-coding both new and old volumes so that the building appears as a cohesive, playful, stacking of boxes which create a play of color throughout the day. The firm cleaned up some of the facades to take away moldings and other interruptions for a cleaner, more defined box, and added colorful, reflective window coverings to hide storage areas. The bright colors, inspired in part by Latin architects Luis Barragán and Ricardo Bofill, create a fresh tropical vibe that reflects the context of Costa Rica, the brand’s millennial clientele, and the merchandise itself. 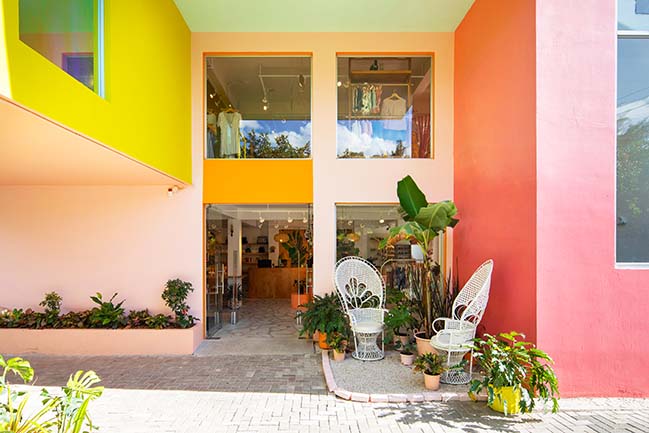 Says Taller KEN co-founder and principal Inés Guzmán, “The facade is a consequence of the context. Until very recently, suburban San José was farmland. Today it is gated communities of houses and convenience malls and shopping centers. For us, the project was an opportunity to make the stand-alone building “stand out” and bring a fresh, hip and colorful vibe to the surroundings and break from standard palette of new constructions you see around.”

On the interior, layered color and textures add depth to the space, informally coding the programmatic elements and merchandising. “The three floors of the building gave us the opportunity to create three discreet worlds within the same store,” says Guzmán. 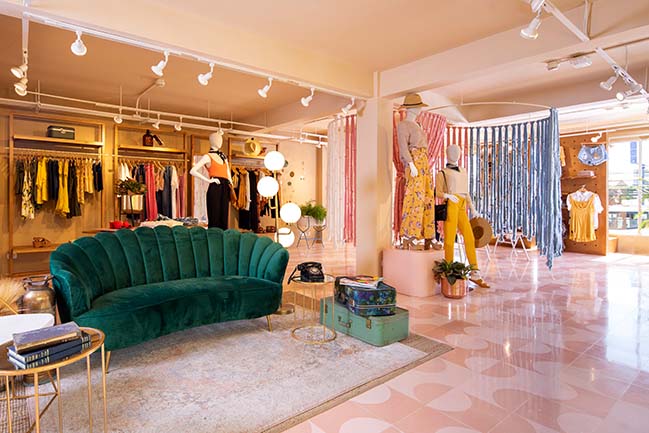 The ground floor, devoted to home decor, accessories and gifts is airy and white, and boasts a mosaic floor made of ceramic shards. The second level, devoted to casual wear and basics, is defined by a neutral palette and hand-made materials, including soft two-tone geometric pink floors, sand-colored stucco walls and textural accents, such as a yarn curtain and dark green velvet sofa.

“The third floor is more dynamic and designer-oriented, where clients are given special attention and styling services. Elements of the space are curvy and feminine, yet with a bolder palette”, says Guzmán. Striking black and white terrazzo floors, steel hangers, and yellow and black furniture offset the more formal merchandise on the third floor. Custom millwork stained a dark honey color is consistent on all three levels. 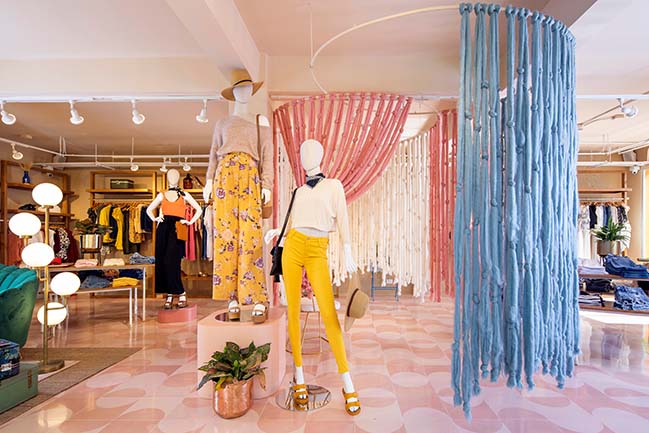 “We pride ourselves in being able to layer a lot of color, patterns, and texture together,” says Greg Melitonov, co-founder and principal of Taller KEN. Elements such as the colorful yarn curtain on the second level modulate the space, aiding in circulation, while also creating an “experience room” appropriate for selfies or modeling clothes for friends.

“The yarn curtain is three colors, but it contains variation between the knotted and tufted textures of the yarn, and the geometric patterning of the floor. Our mood boards and palettes tend to be very layered in terms of color and texture, and we believe in that layering of pattern on pattern, it’s a way to add freshness, texture and depth to a space,” says Melitonov. 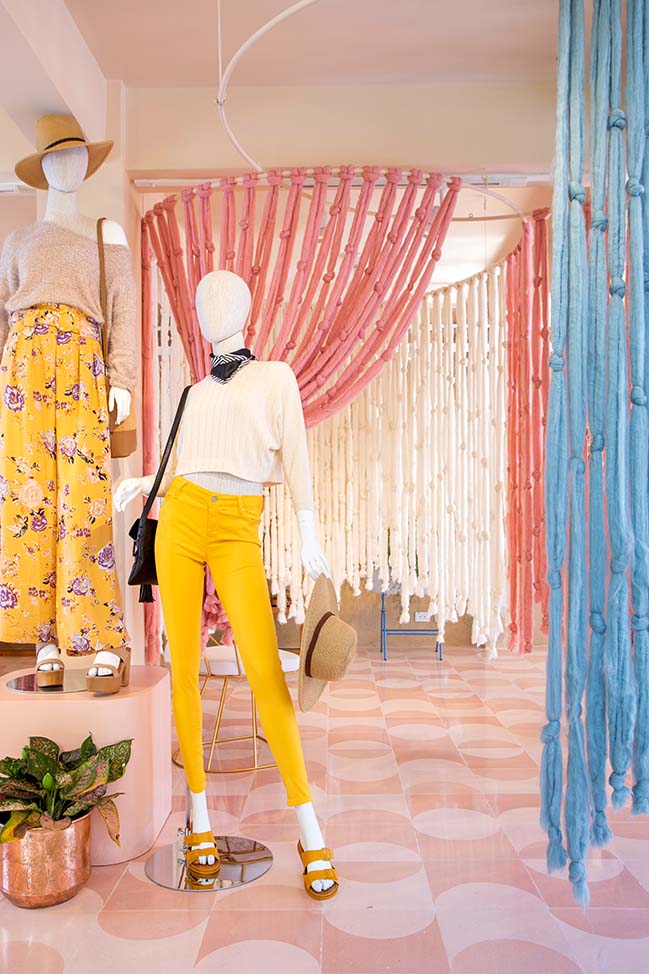 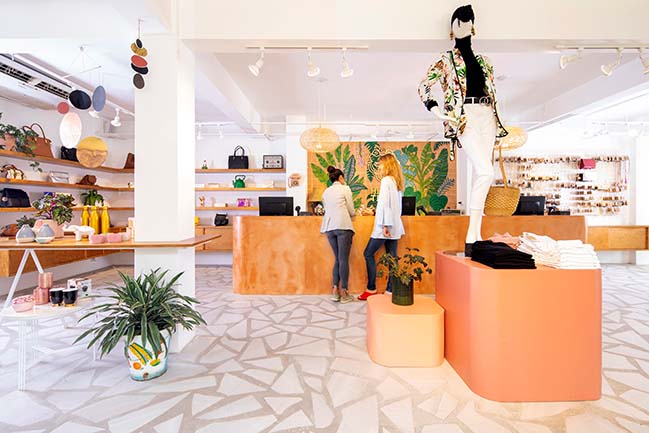 YOU MAY ALSO LIKE: United Cycling Lab & Store by Johannes Torpe Studios 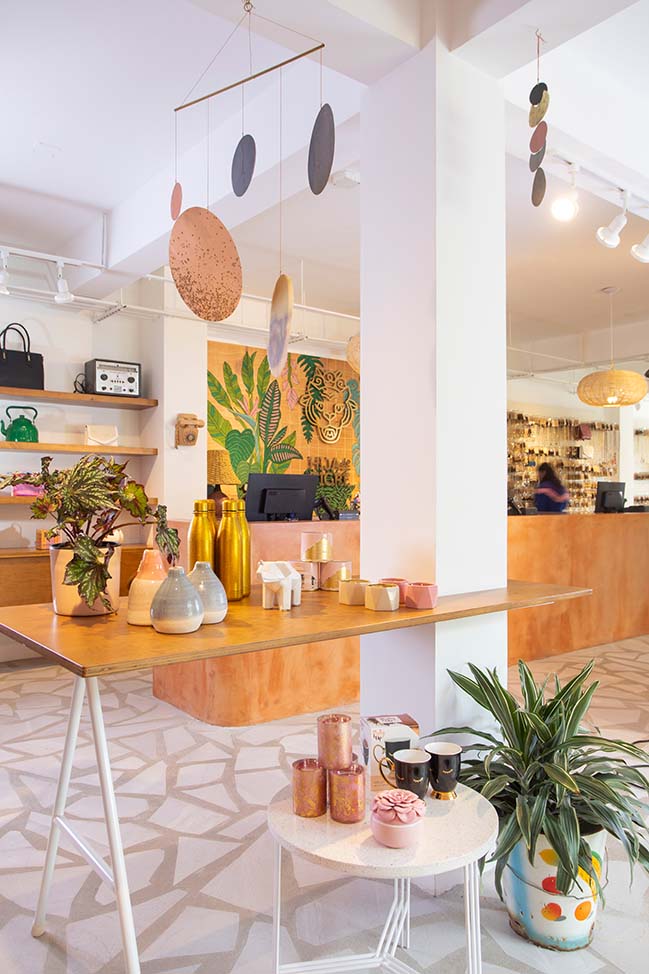 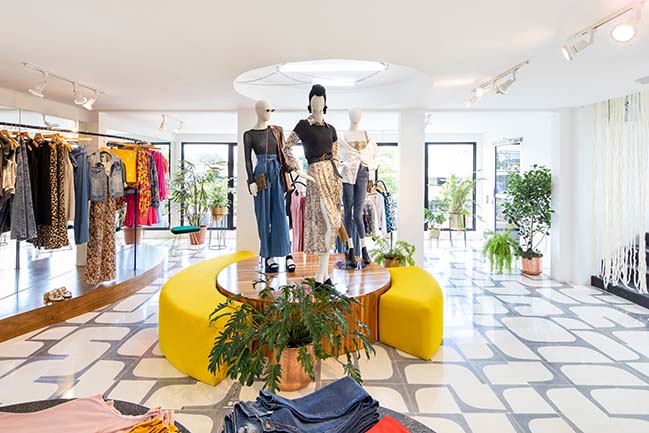 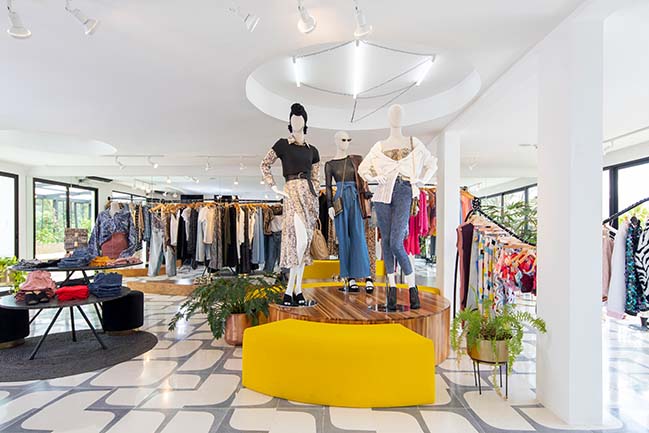 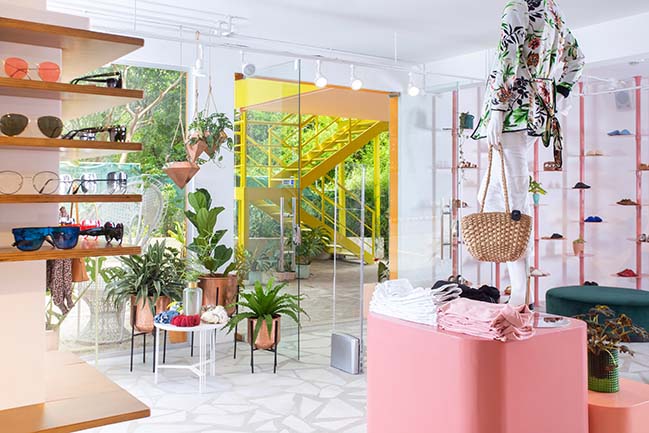 YOU MAY ALSO LIKE: Galeries Lafayette Flagship on Champs-Élysées by Bjarke Ingels Group 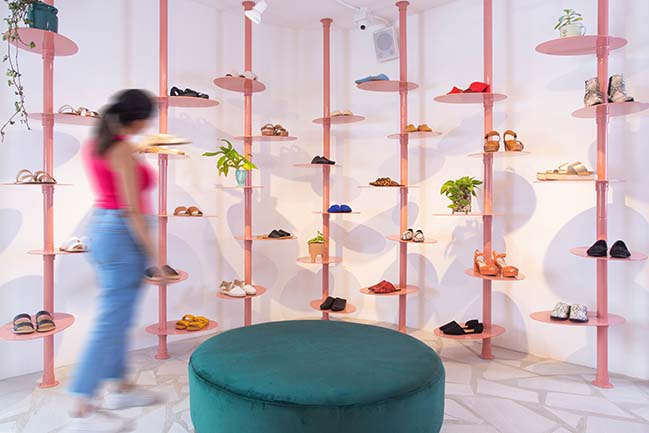 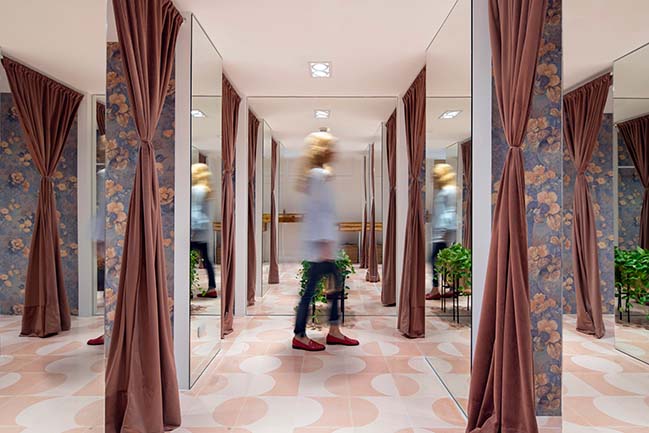 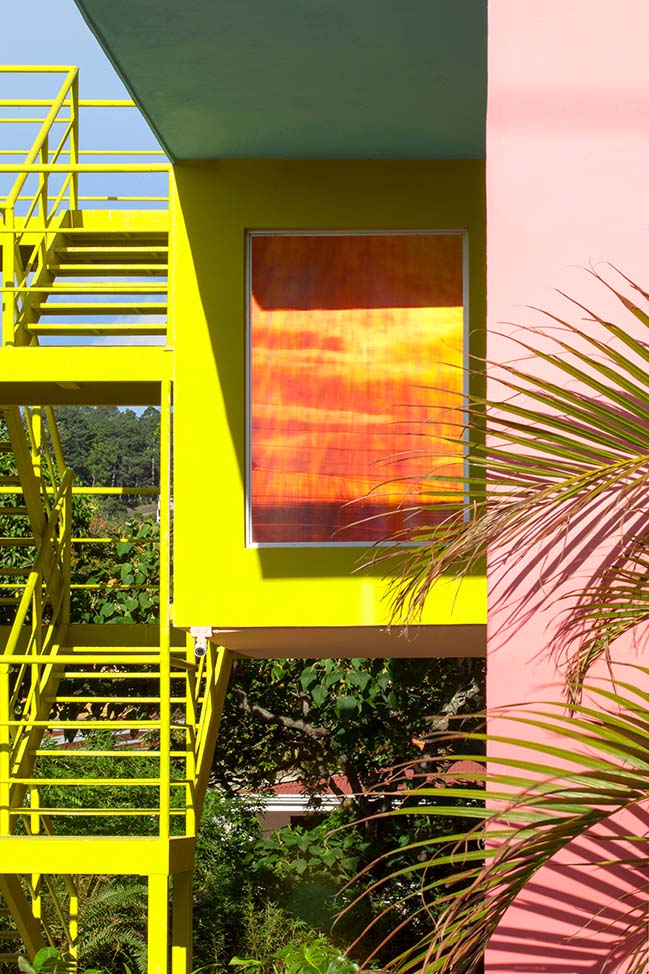 YOU MAY ALSO LIKE: Boutique hotel and yoga studio in Costa Rica by Studio Saxe 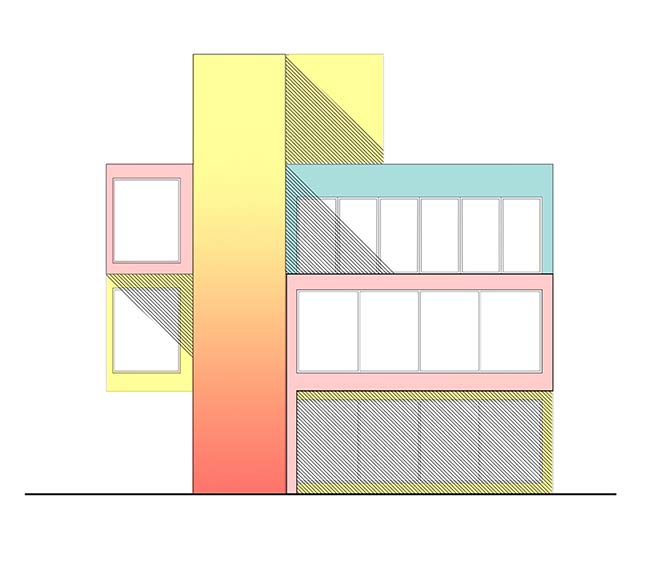 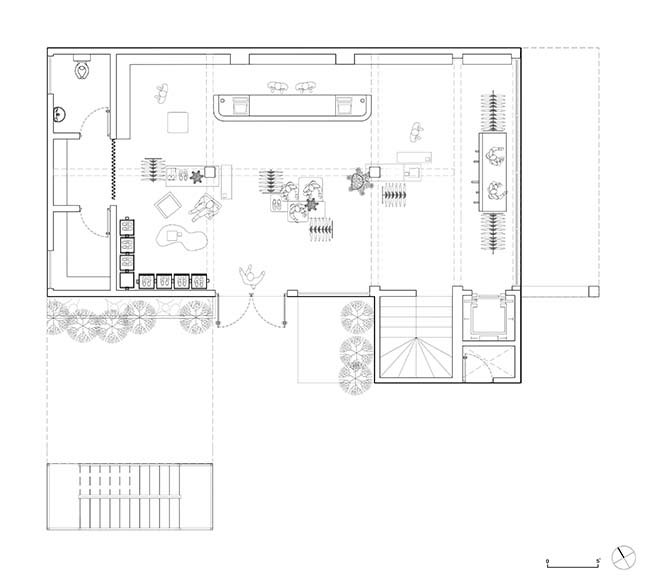 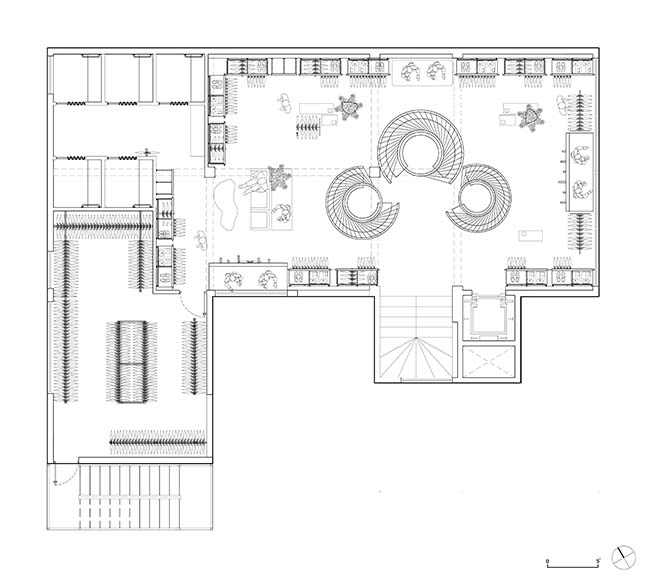 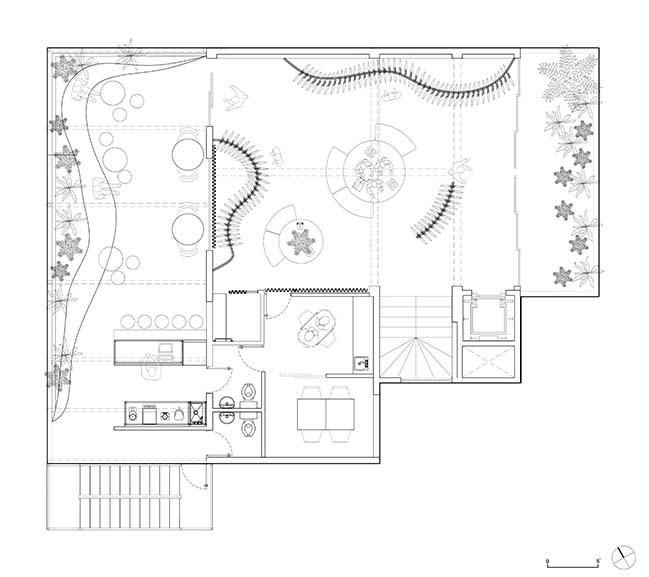