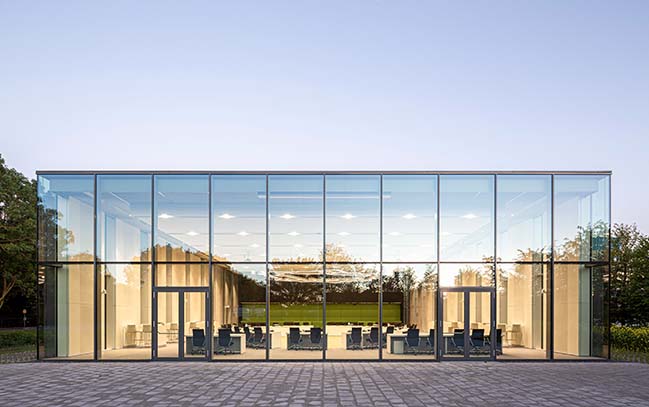 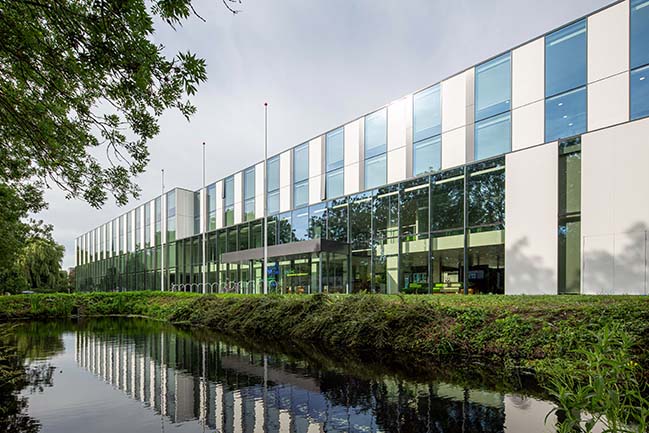 From the architect: The revitalization was designed by cepezed architects and cepezedinterior. The old housing was in bad constructional and construction physical shape. As a result, it used a lot of energy and was climatologically uncomfortable, among other things. Also, the building was too big for the current ways of working and there were deficiencies in the fields of experience and functionality. For example, it was not representative and it was arranged as a traditional, closed office structure that limited both the spaciousness, the influx of daylight and the flexibility. The renewal was aimed at a combination of reduction, modernization and sustainability. Moreover, the revitalization was budget neutral. 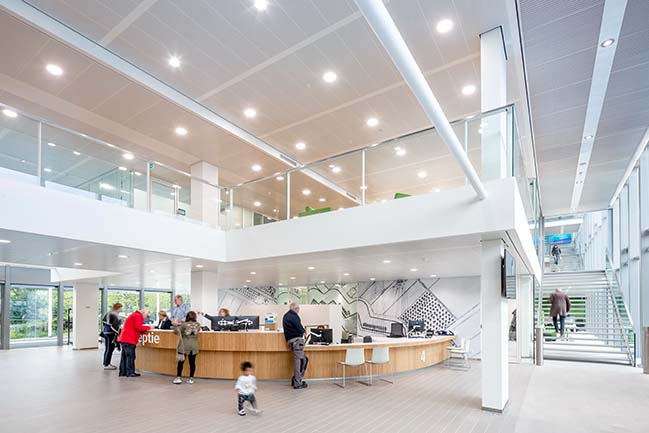 Existing structure
The existing ensemble of buildings came about in different phases during the 1980’s. It was put together as a row of three connected office blocks of various heights and dimensions along the Blekerijlaan and perpendicular to that, a volume along the Bleek. The latter was originally constructed as an industrial hall but by now, it housed the Historical Centre and the council chamber. The corner between the hall and offices contained a construction segment that functioned as the main entrance. The complex just south of the historic ramparts was taken into use by the municipality during the 1990’s. 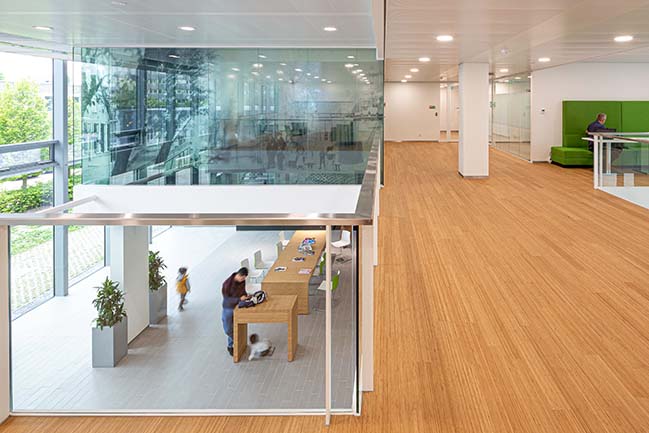 Compact building
For a more compact and unambiguous entirety, several construction segments were taken down while limited new construction was purposively added. Overall, the gross floor area was reduced from around 14.000 m2 to some 8.000 m2. The former industrial hall was significantly reduced and the entrance building was done away with entirely. The far end office block along the Blekerijlaan was replaced by a new council chamber with a fully transparent façade at the end. The middle block was lowered to the height of the other remaining office volume and on both longitudinal sides, it was provided with added zones containing fully transparently glazed voids. These additions also contain the new entrances of the town hall. 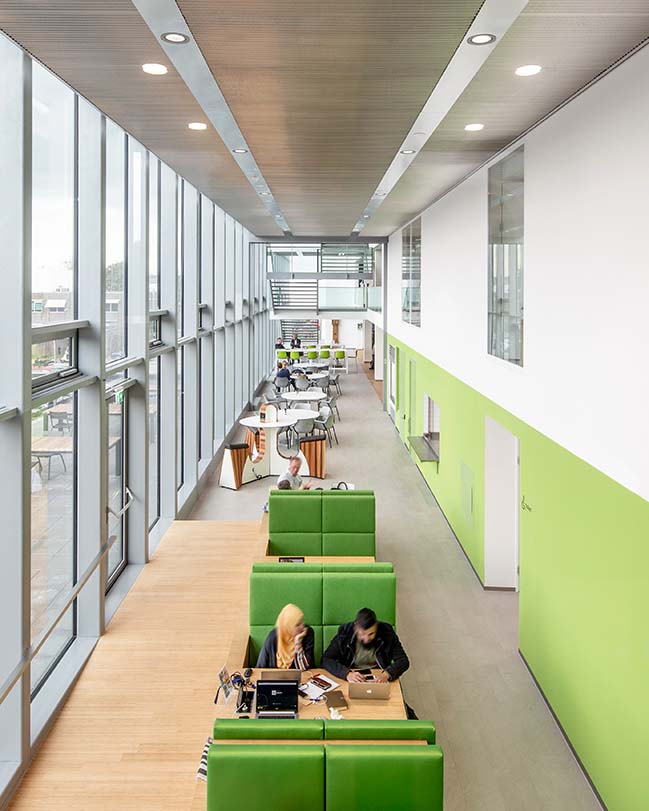 Quality ambiance
The voids play a major role in the quality of the town hall’s overall ambience. Not only do they bring light, airiness and spaciousness into the building, they also strongly add to the physical and visual interaction between the different functions and floor fields. Additionally, they are an integral part of the climate concept. 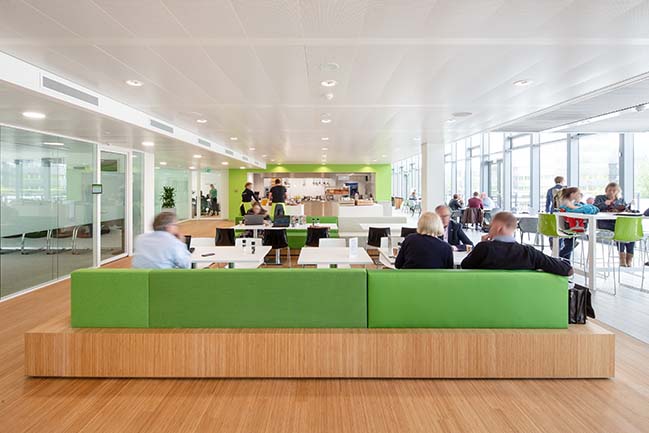 Openness, spatial experience and connection are also central themes for the overall project. For example, the traditional closed office arrangement was completely removed and replaced with large open zones and rooms with transparent separations. The installation equipment as well as the piping and cabling were integrated with minimum dimensions, so that the storeys have a maximum free height. The security boundaries and fire compartmentalization were placed and executed in a manner that they nowhere obstruct the lucidness and inviting atmosphere. The glass sections of the new façades are six feet wide and cover the full height of the storeys, so users can feel directly connected to the green vegetation outside. 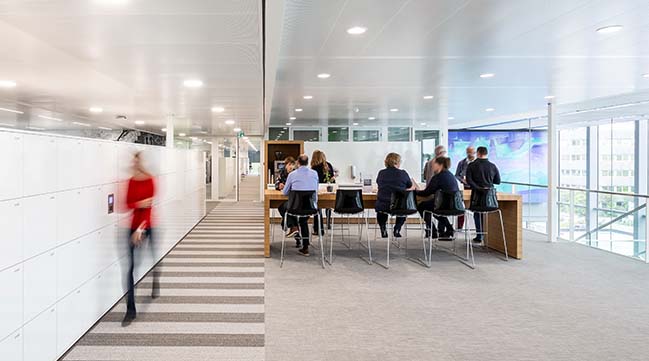 Flexible workplaces
The quality of the workplaces was considerably raised. The new interior is fully based on the New Ways of Working and has a flexible arrangement with different types of work places. There are a lot of possibilities for cooperation, both within the own organization and with residents, institutions and companies. An exceptional feature is that no one has an own workplace, not even the mayor or aldermen. Also, lots of rooms and spaces are multifunctional. For example, the commission rooms and the administrative centre can also function as regular meeting rooms. The tables in the council chamber are made of lightweight, sustainable hemp and flax. This renders them easily movable and makes that the room can also be used for receptions, weddings and other sorts of large gatherings. 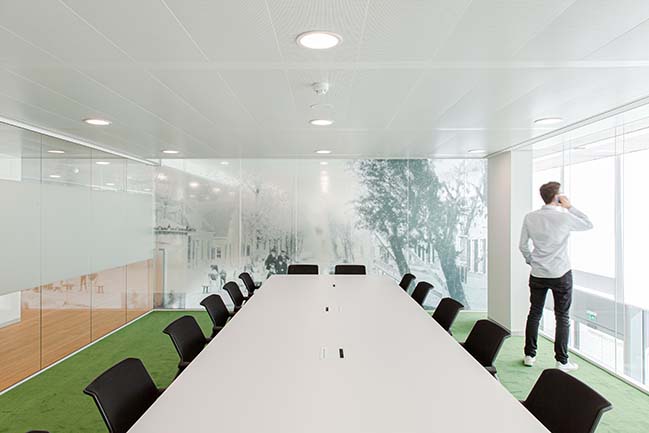 The workplaces are zoned related to different types of work. The more quiet places for peace and concentration are positioned along the façade adjoining the Blekerijlaan. The more dynamic places for cooperation lie along the high open void on the opposite of the building, where one can also find the new stairs and meeting places. On the first floor, adjoining the void, this side of the building also contains the restaurant. This has an outdoor terrace on the roof of the former industrial hall, that contains the Regional Historic Centre just like before. The public zone with the counters is centrally positioned on the ground floor. 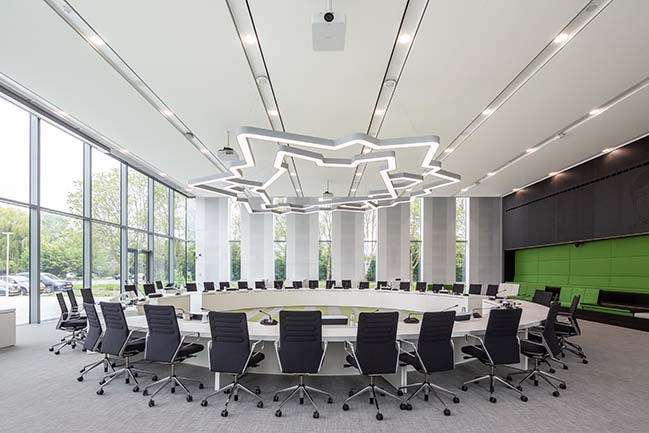 Cope landscape
In terms of tone and atmosphere, the renewed interior is based on the characteristic cope landscape of the Dutch Green Heart area, of which Woerden is the capital. In the middle ages, the land parcelling was arranged by means of so called ‘copes’, contracts in which the agreements on ground cultivation were recorded. The influence hereof is still clearly visible in the landscape, which is typified by a rich variety of strips and green tones. The interior also incorporates several other elements that underline the identity of Woerden. For example, old images from the historic archives were strongly enlarged and used as privacy foils or wallpaper. The large chandelier in the council chamber is shaped in the contours of the historic Woerden ramparts. 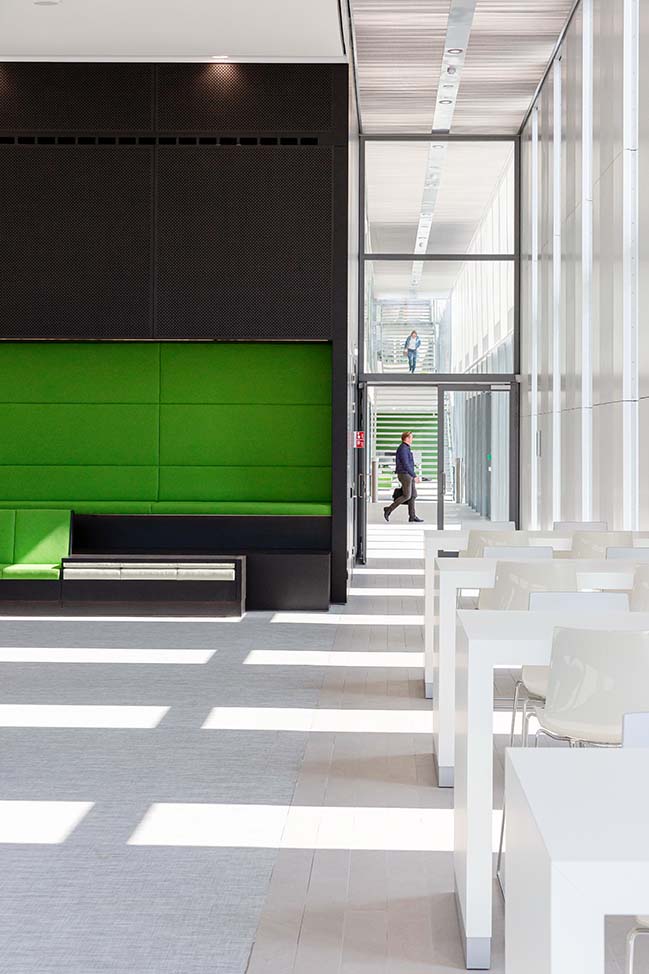 A+++
Energetically, the town hall has made a leap of over six steps. Formerly, it had the energy label G. The municipality’s ambition was label A+ at least. Eventually, the revitalized building received the label A+++, the second highest attainable. In order to achieve this, the façades are strongly insulating and the building is equipped with an aquifer thermal energy storage and a large surface of solar panels. Also, it does not use any gas anymore, while the lighting and climate equipment are energy efficient. Important for the sustainability as well is the circular demolishment of the removed and stripped construction sections. All materials released during demolition were strictly separated and no less than 98% will be reused through a certified processing company. 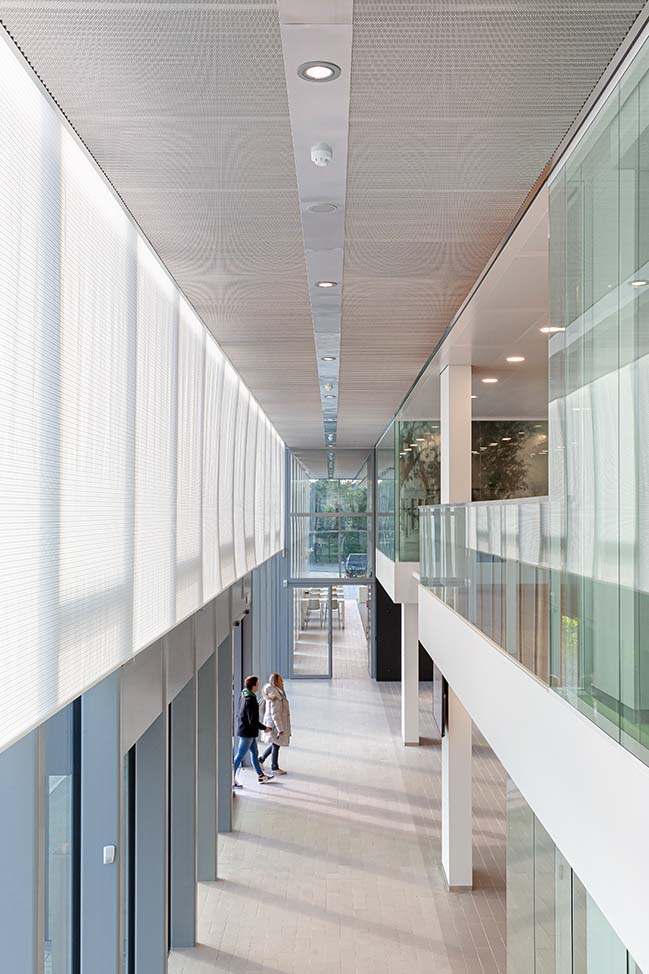 Budget neutral
The reduction of the gross floor area and the various sustainability measures strongly save on energy and maintenance costs. Including the costs of financing for the overall renovation, the total exploitation costs for the new town hall remained equal to those of the old. Thus, the revitalization came about budget neutral. 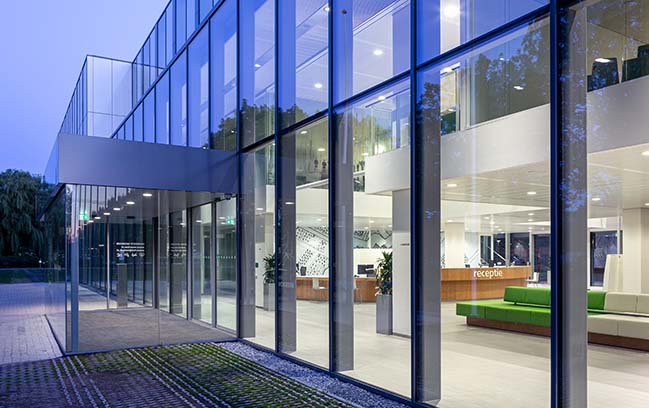 YOU MAY ALSO LIKE: cepezed designs first self-sufficient bus station in The Netherlands 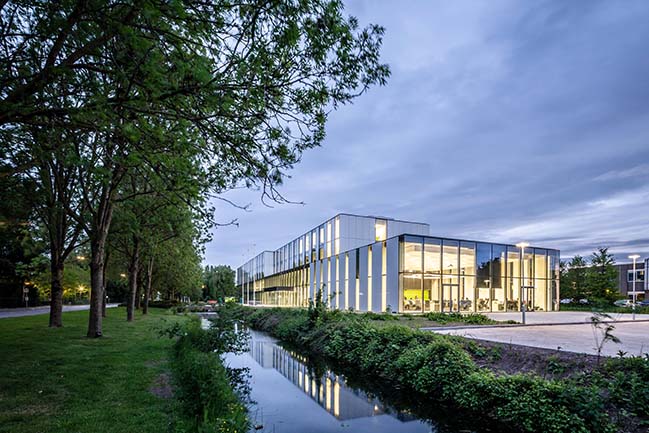 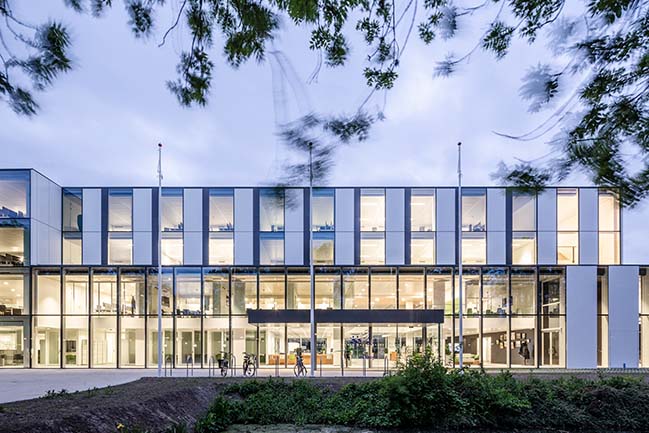 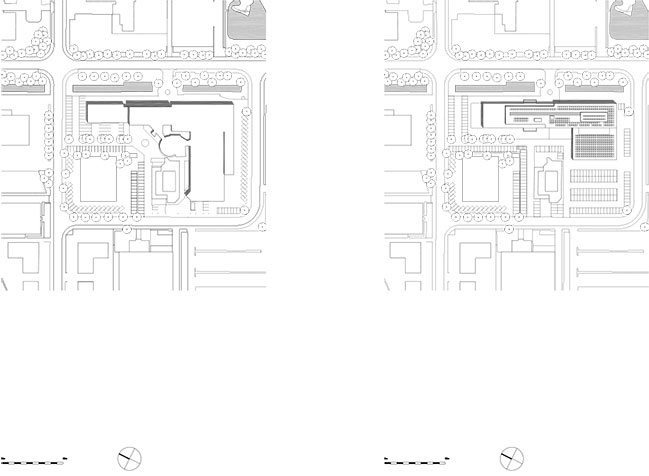 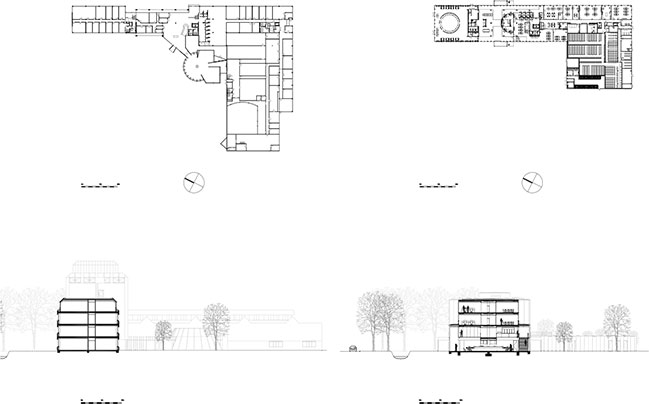 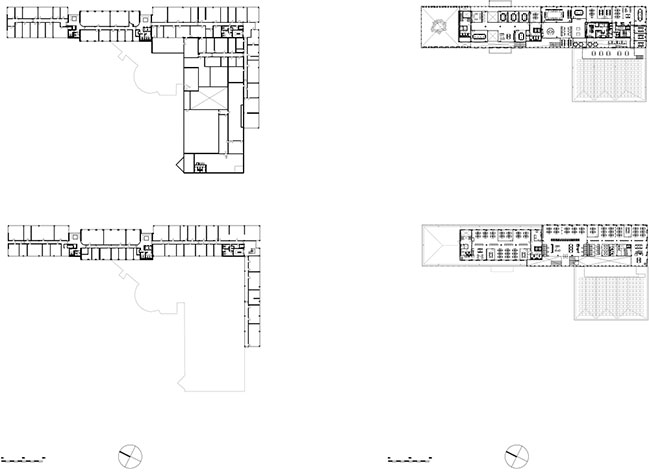 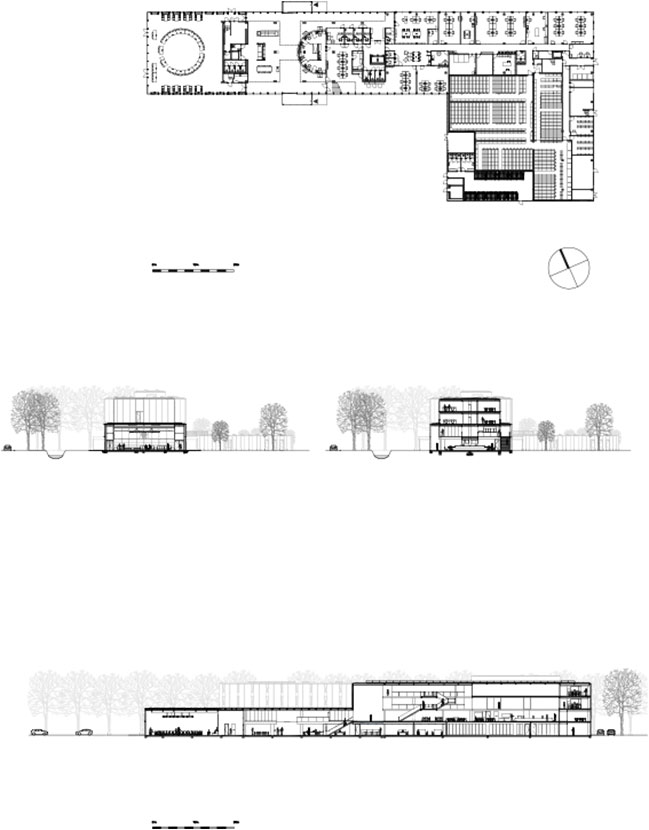 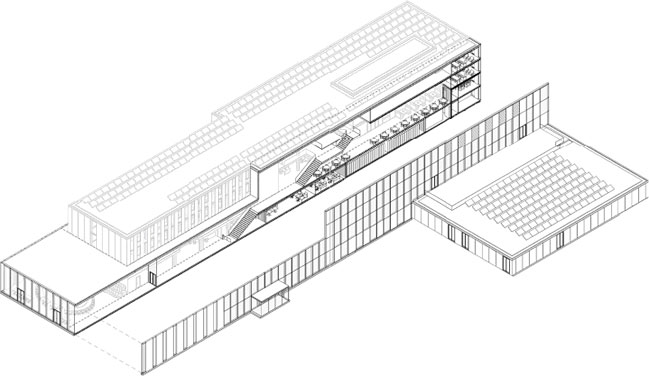 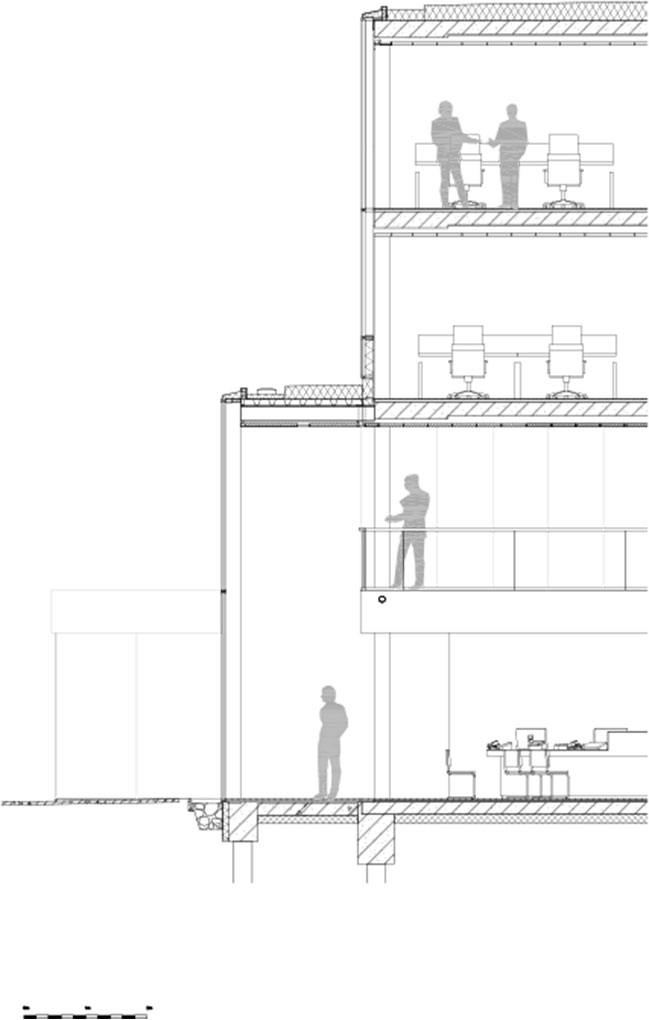 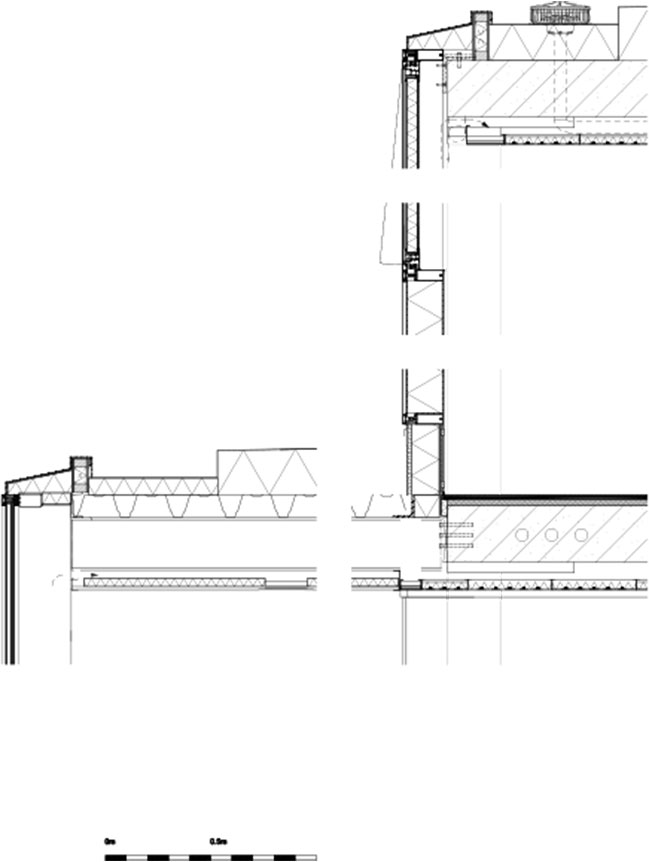 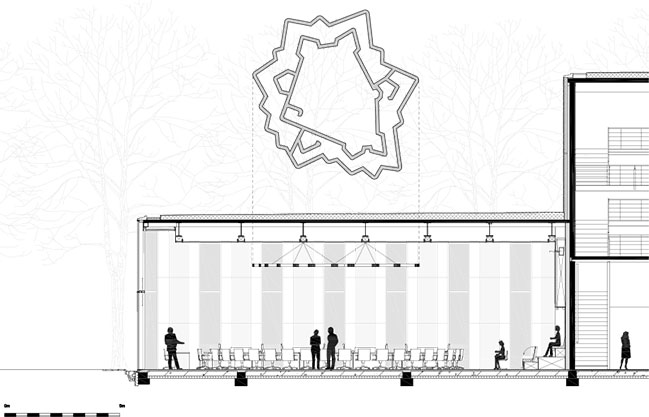 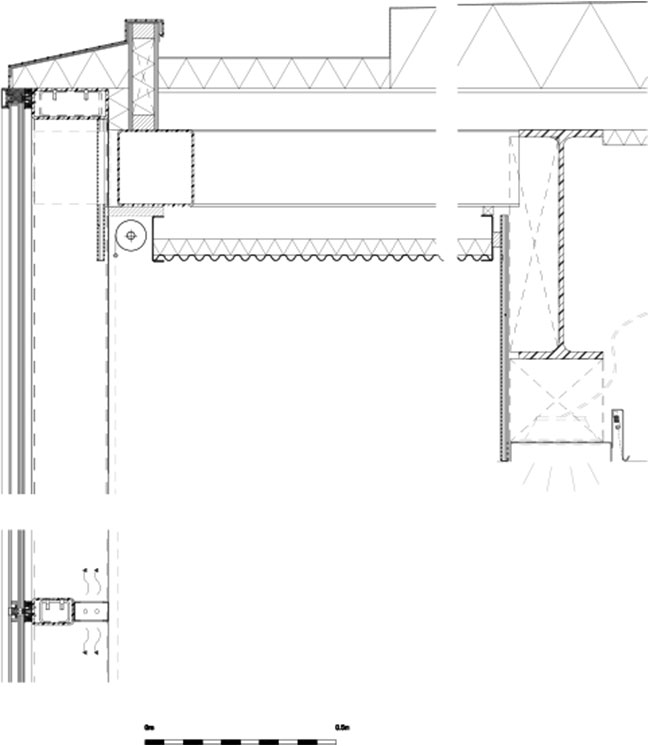