UNStudio completes the new HQ for the creators of K-Pop

UNStudio unveils its recently completed design for the Headquarters of YG Entertainment in Seoul, where K-pop fans have a chance to catch a glimpse of their latest idols... 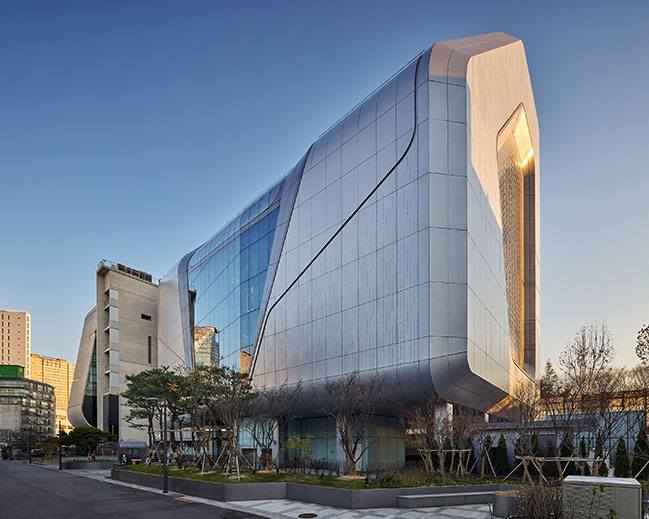 From the architect: The South Korean music scene, otherwise known as K-Pop, is currently making huge strides in the global music industry. Popular with fans from Asia to the Americas, South Korean bands are currently topping the charts and selling-out stadiums. With its fingers on the cultural pulse and a social-media-savvy fandom, K-pop is currently taking the world by storm. 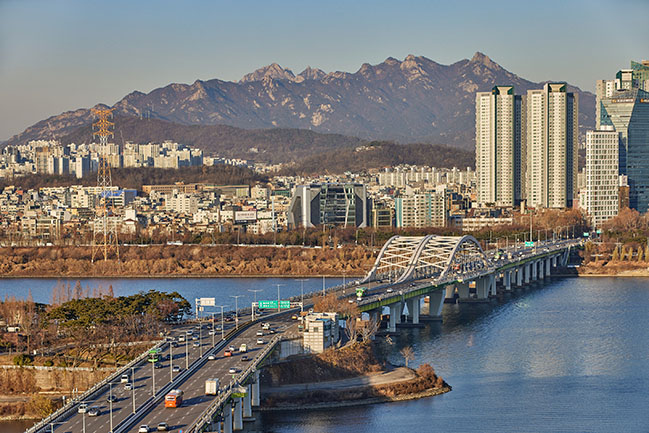 In 2017 YG Entertainment, the producers of K-Pop, invited UNStudio to design their brand new headquarter building in Seoul, which since completion has become a site of pilgrimage for fans hoping to catch a glimpse of their latest idols. 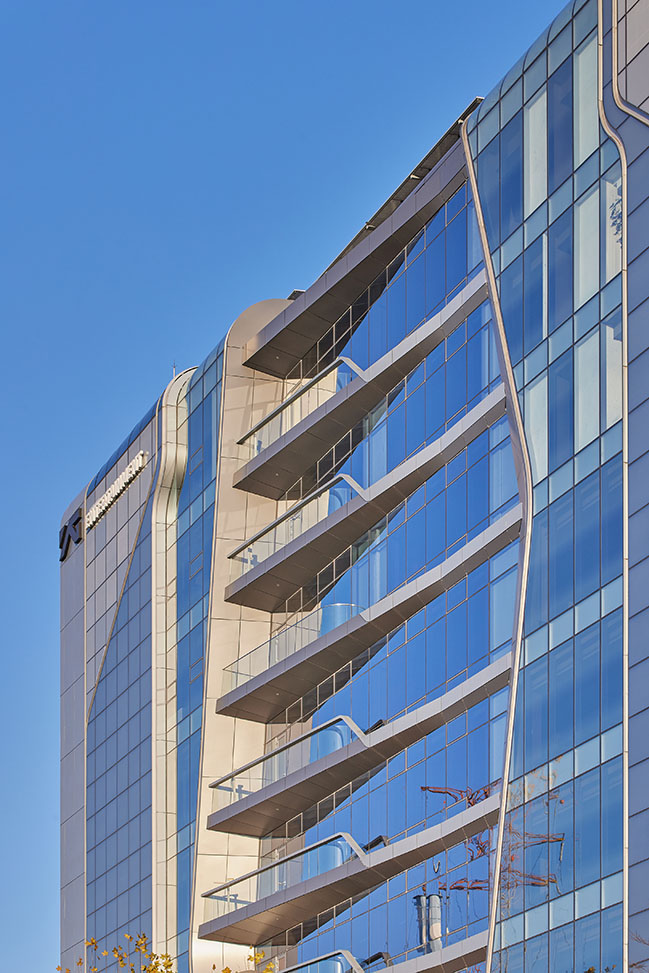 A new HQ for YG Entertainment in the megacity of Seoul
UNStudio’s design for the new headquarter building is inspired by YG Entertainment’s business and the music industry in general. The new building houses office spaces, meeting rooms and recording studios, all of which are strategically organised to take full advantage of the location and to provide YG Entertainment’s employees with the most uplifting and inspiring work environment possible. 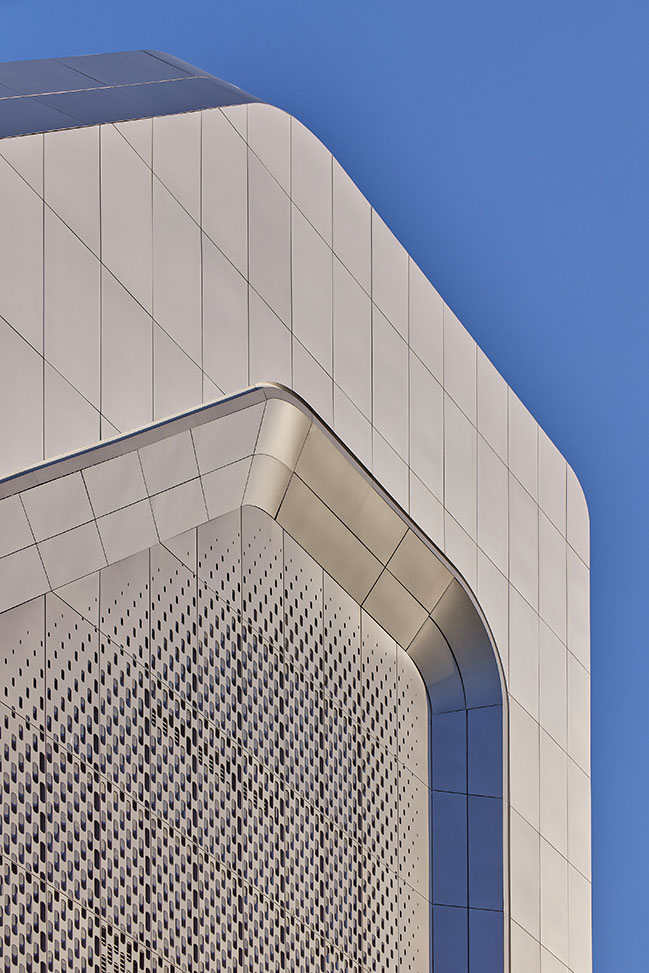 The new HQ is located on a site that borders two very different worlds. To one side, it abuts a low-density housing area, while on the other, it faces a dense network of highways and bridges and overlooks a large green park. This discrepant positioning informs the design, the building orientation and the internal organisation, while also serving to open up views towards the river from the interior workplaces. 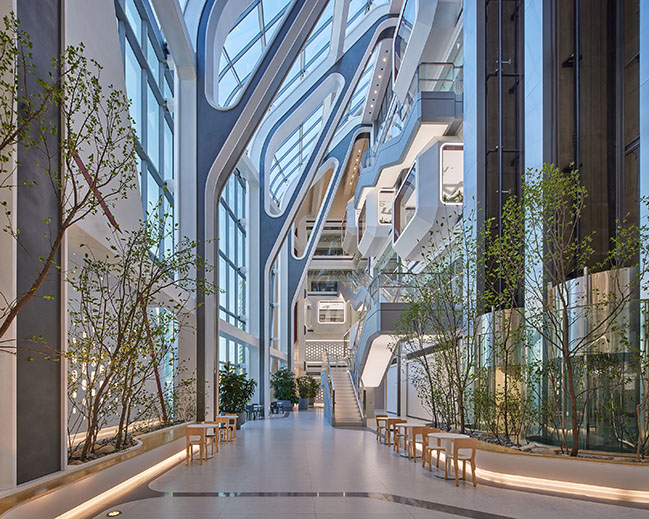 Interior
The new YG Headquarters is situated directly next to the well-known existing YG Building, the interior of which celebrates a ‘black in black’ concept. The new HQ interior takes the opposite approach, introducing instead a brightly lit space with a range of white tones and geometric lines. 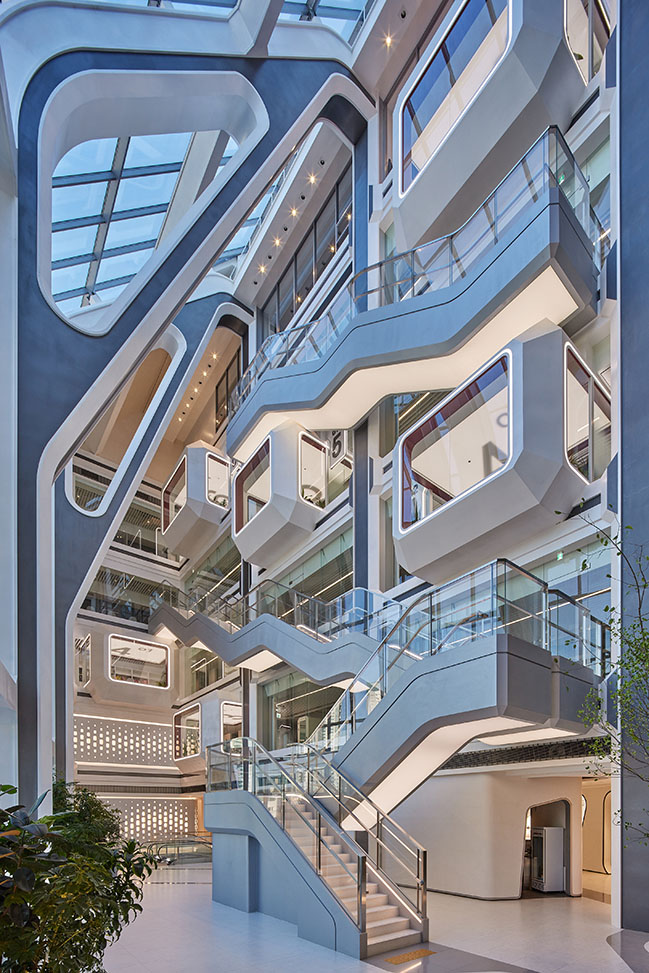 The dual qualities of the surroundings are reflected in the interior organisation of the building through an interlocking sectional concept for the functions. This logic, combined with visual coherence in materials and geometry, creates a unique interior experience that is visually linked to the exterior street level, while the roof floods the central atrium space with daylight. 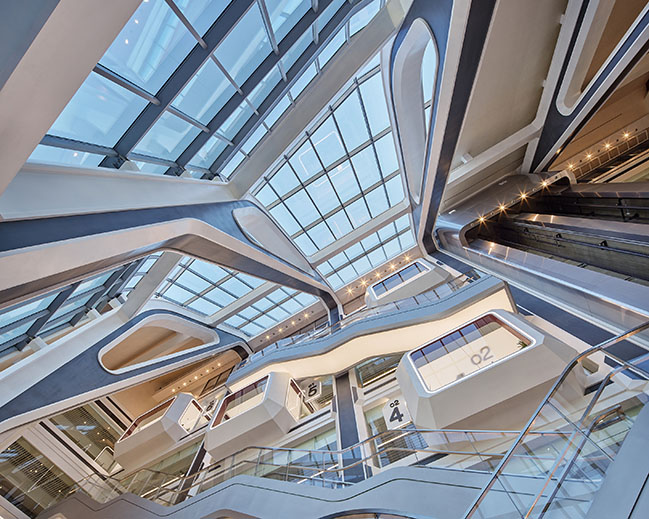 The seven office levels are oriented towards the view to the park, a placement that ensures daylight on all working floors. The meeting and collaboration spaces on the first 4 floors face an interior atrium, which serves as a collective space in the heart of the building. This area acts as a central stage for the lower level offices and the recording studios, as well as for the users, staff and visitors. 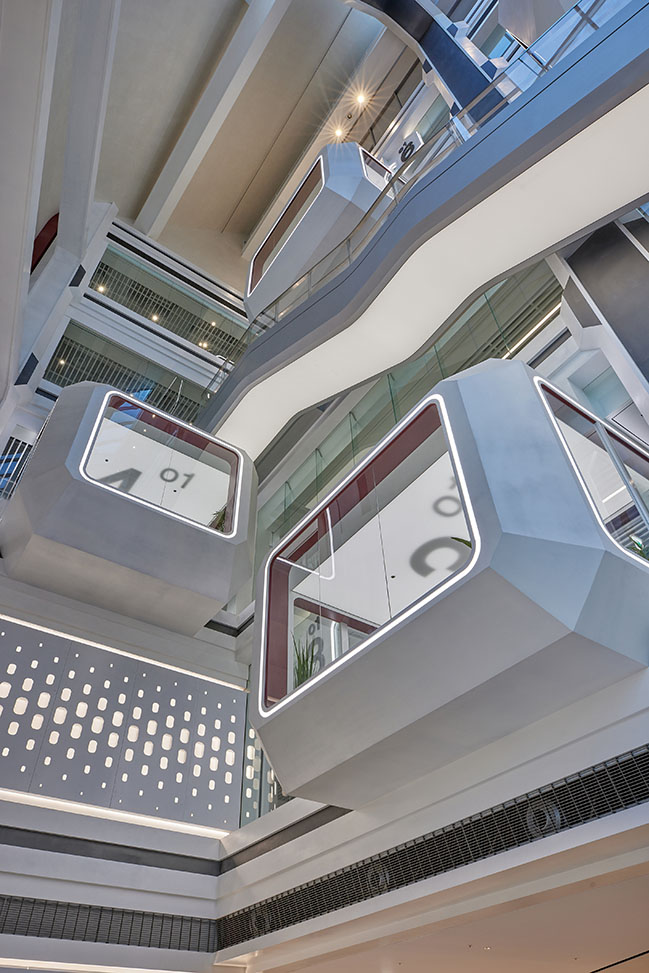 The interior facade of the atrium is punctuated by exposed capsule-like meeting rooms that can serve as either ‘working zones’ or ‘resting zones’. These capsules further enable visual interaction throughout the atrium and towards the office floors. On ground level, the atrium space hosts a hidden garden and functions as a ‘living room’ to welcome visitors.

Wayfinding is integrated into the interior design by way of a network of geometrical lines that guide people to the different zones in the building, easing the people flows and creating a spatial hierarchy. 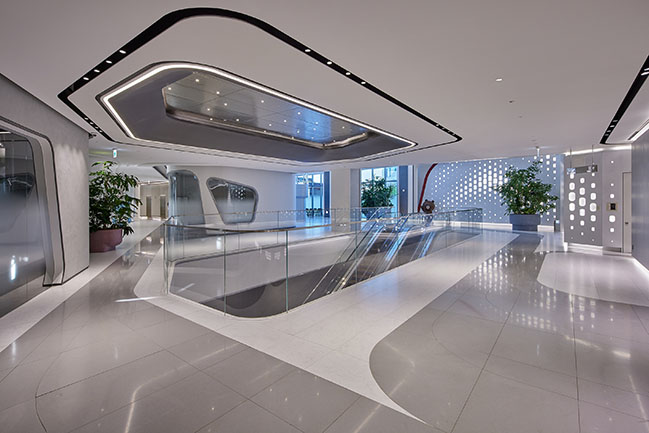 Urban Speaker
The protective shell of the new HQ building manifests as a new ‘urban speaker’. It is designed to be more reminiscent of a product than a building; one in which every design feature has a performative function. 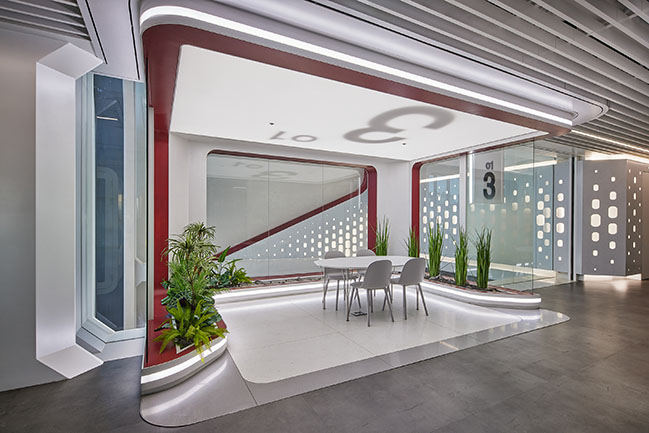 The existing YG Building next to the new HQ is characterised by its exposed concrete exterior. Corresponding with the overall massing of the existing building, the new YG HQ aligns in height, floors and functionality with its older brother, while creating a new impulse for this location and an organisation that is enabled by its unique positioning between city and park. The massing of the new YG Headquarter building further reflects this duality through interlocking the protective shell-like exterior facade with the more human-scale materiality of the interior. 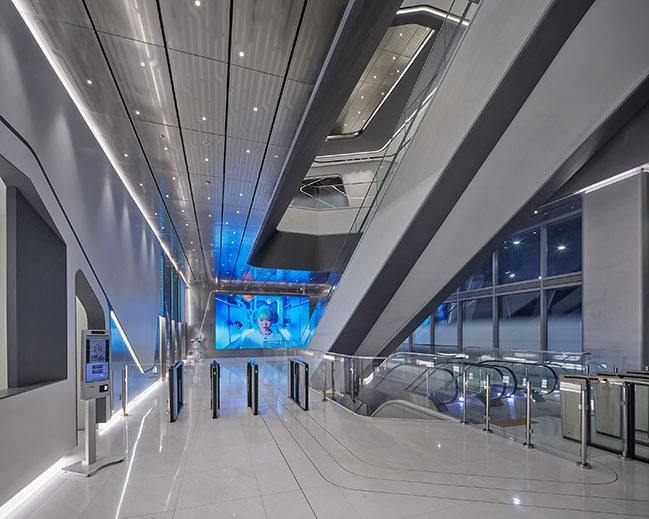 Clearly defined zones within the protective outer shell relate to the urban placement of the building. These zones are defined from the inside, based on their particular use and interaction with the outside environment. 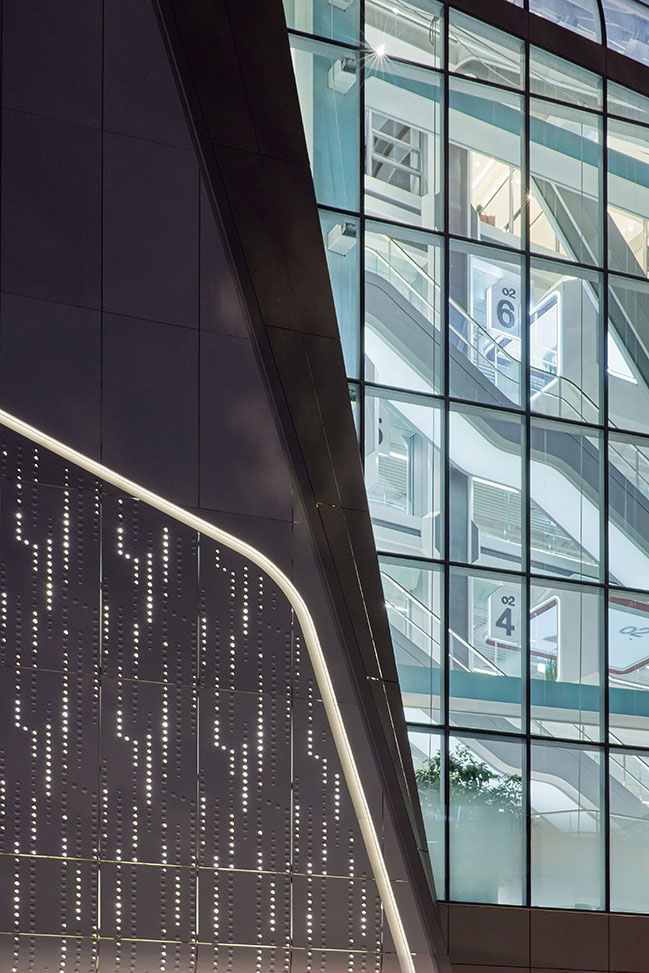 Fully glazed areas are located towards the park and the central zone on this side of the building is equipped with balconies. These enable outside spaces for the users during work-breaks, while also providing sun shading for the levels below. BIPV solar cells are also integrated in the south-facing facade and on the roof. 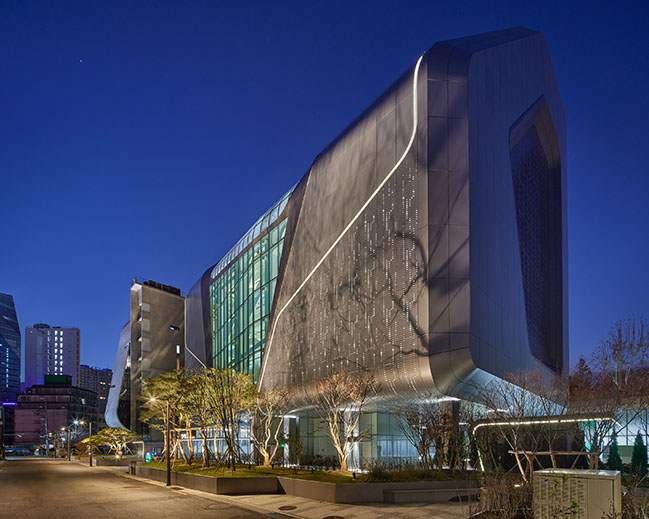 Semi-glazed zones are allocated in the transition towards the fully opaque facade. In some of these solid areas, especially those located towards the housing area, dynamic lines are used to highlight certain zones, while a perforation pattern and alternation of aluminium panels and glass provide a glimpse of the functions and activities inside the building. 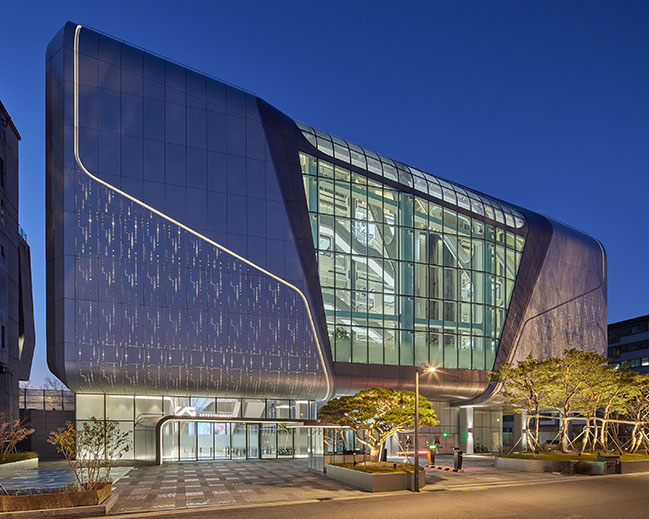 The integration of planting functions as an extension of the nearby park, while also forming a distinct contrast with the metallic exterior of the building. On ground level the green extends towards the inside of the building. 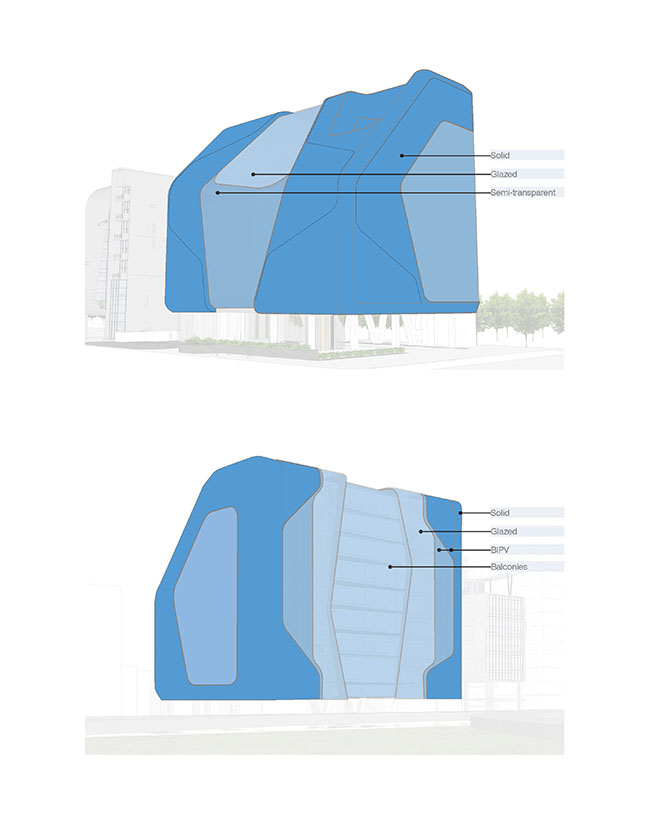 During the day, the ‘urban speaker’ is designed to provide the best possible working environment for its employees from the inside out, whilst at night this workplace begins to glow and become an identifiable part of the city’s skyline. In the evenings the illumination concept of the various interior zones employs the facade lines and  perforated hues to reveal a glimpse of various layers within the building, accentuating the quality of performance inherent to the entertainment and music industry. 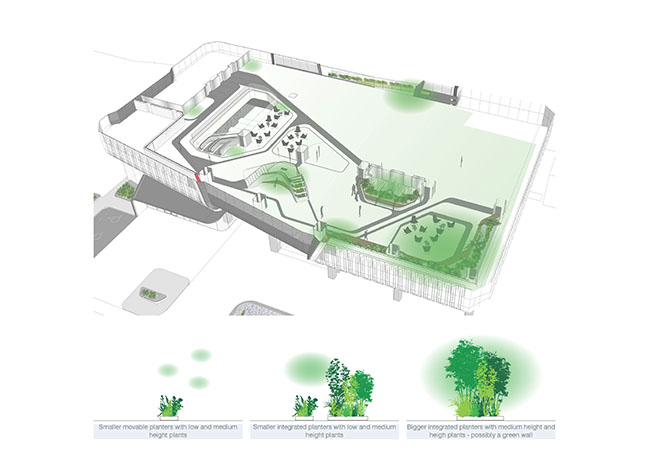 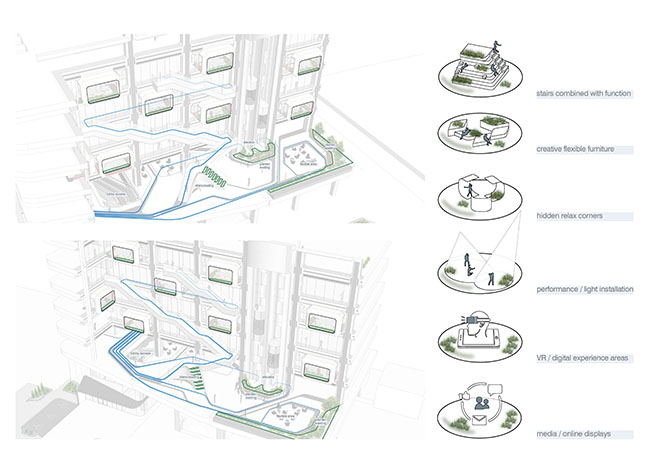 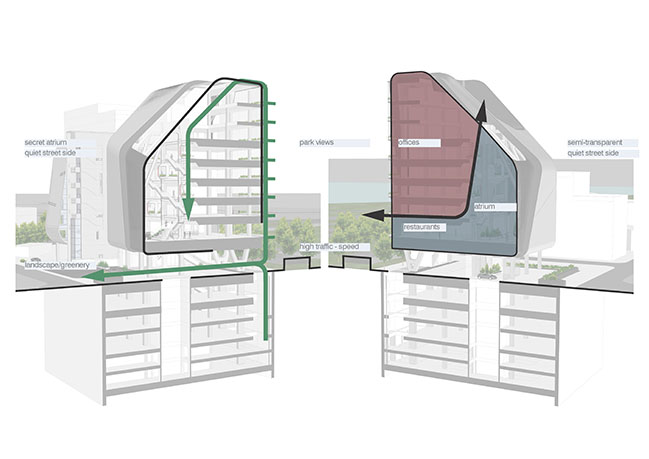 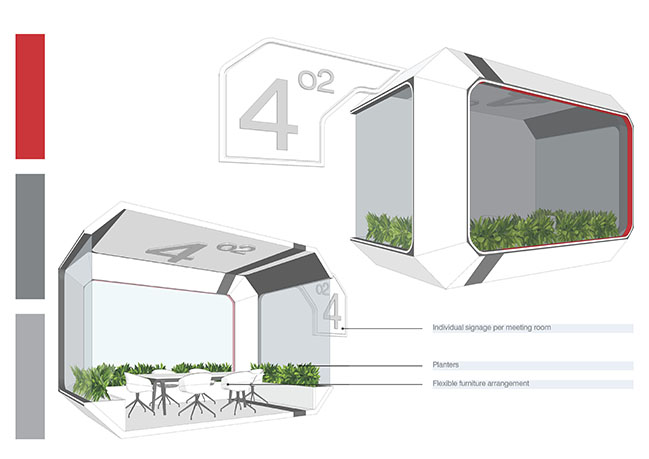 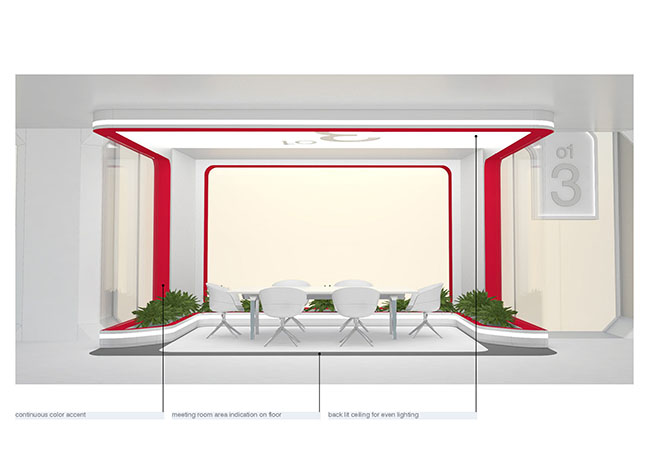 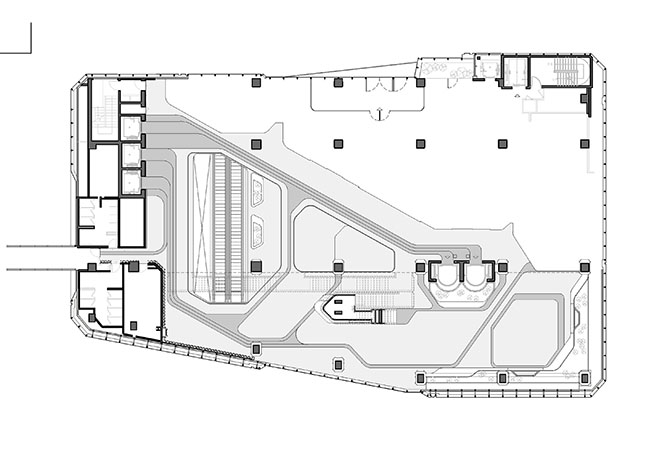 UNStudio completes the new HQ for the creators of K-Pop

03 / 15 / 2022 UNStudio unveils its recently completed design for the Headquarters of YG Entertainment in Seoul, where K-pop fans have a chance to catch a glimpse of their latest idols...