Wind Tower is an amazing architectural concept by Peter Stasek Architects that represents a kind of skyscraper which is shaped by tsunami and hurricane masses. 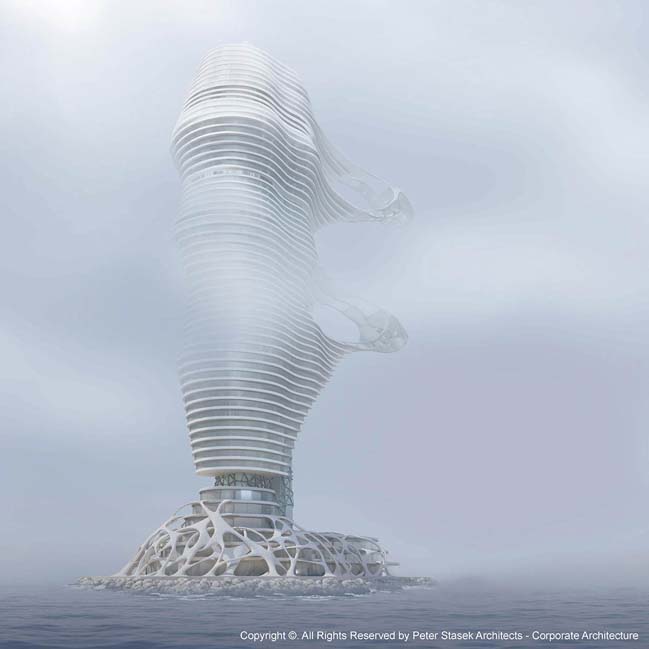 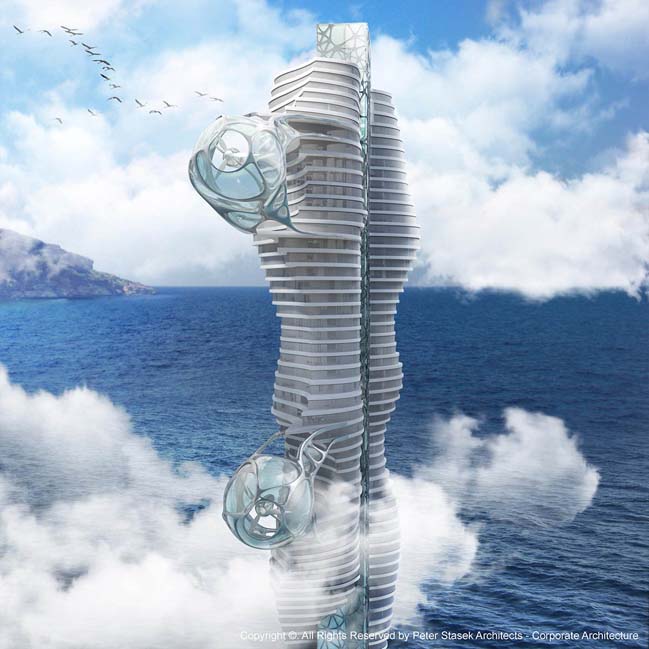 From the architects: The global climate change leaves visible traces in the environment which sometimes emerge in the form of scars or devastation or simply represent the disappearance of something that has always been present. Humans struggle against this largely self-inflicted new world order and continuously try to slow this process down. The ever-shrinking glaciers in the high mountains are covered with awnings during summer and the regions which are endangered by sea flooding are equipped with new ramparts and sluices in order to protect the coast. Just as the tsunamis, the hurricanes transform the man-made environment in large stretches of land into a mishmash at one go, which makes it hard to guess what kind of function its components had to fulfill in the past. A new kind of aesthetics defined by chaos. 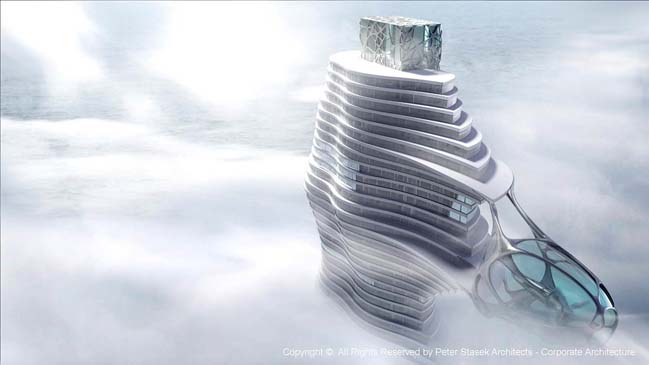 But also this chaos shows a certain pattern and is arranged according to principles which might not be recognizable at first glance. There even might be the possibility to draw on this pattern and to transfer the aesthetics of these traces of chaos to the structures created by man. A new order generated from chaos. As a new challenge, one could try to develop new urban structures and architectural forms which are not in contrast to but in conformity with the forces of nature which are able to further develop their potential of strength as a result of the global climate change. 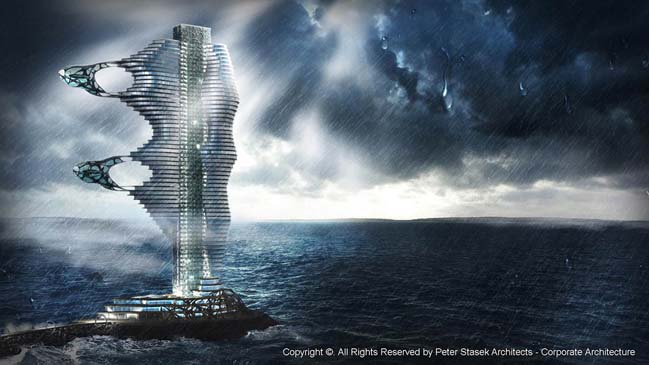 The concept "Wind Tower 2016" represents a kind of skyscraper which is shaped by tsunami and hurricane masses. The building structure itself pays homage to a wind-shaped cloud which is wrapped around a monolithic core. In terms of quantum physics, this represents the imaginary transition from water vapor to solid matter. A trapped cloud in its free form, pending in the air and only fixed by the core, still demonstrating its homogeneity (resonance) to the floating streams of air. At the same time, this could fulfills the function of an airstream catalyzer due to its materialized manner and its exterior shape in order to further strengthen the airstreams floating on its surface which are finally guided to the downwind turbines integrated in the facade end. 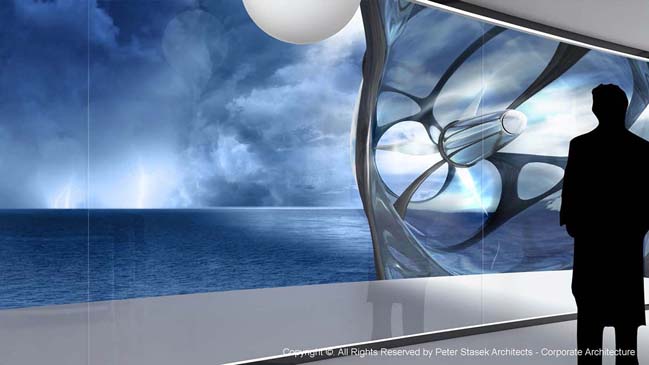 The rectangular-shaped building core rises vertically into the sky like a monolith from a remaining island after a flood. Its significance not only lies in the function of the supporting pillar but also in the function of the main component of the development of the entire “cloud community”. Its surface covered with black photovoltaic panels is not only contradistinctive to the white Corian covering of the cloud but represents an additional energy source in addition to the wind turbines. The project "Wind Tower 2016" thus represents a concept of unification in which the function of energy generation is not perceived as an unwanted foreign object but as an associated part integrated into the building design. In this way, its benefit can be harmonized with something that “moves and agitates”. 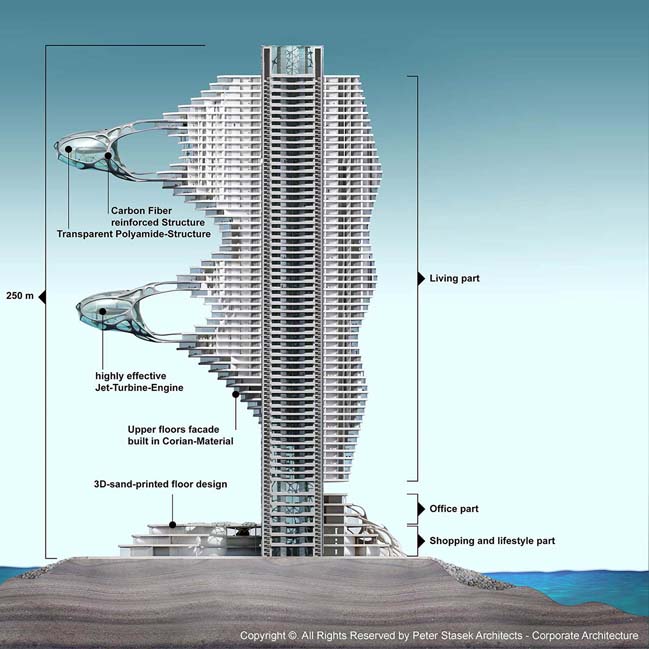 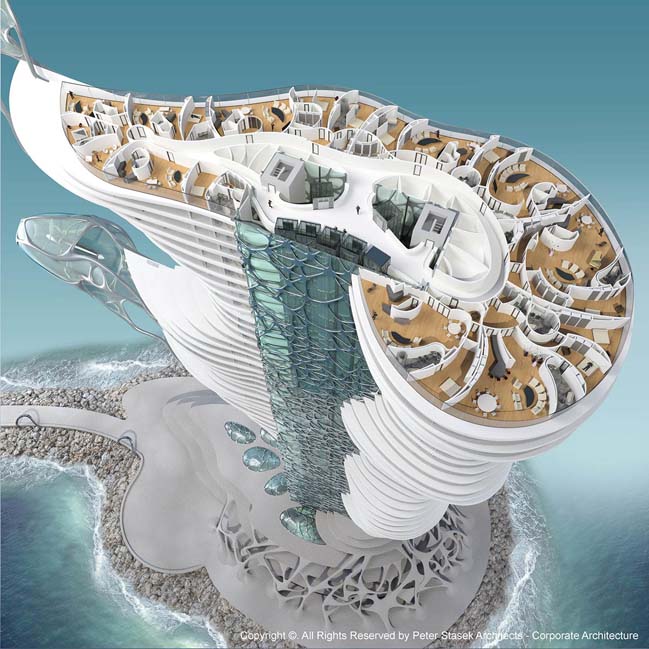 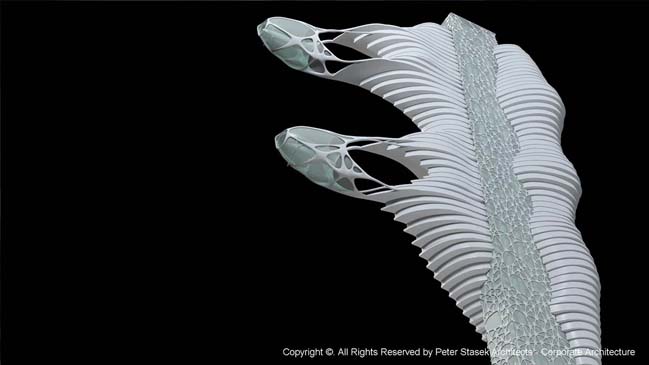 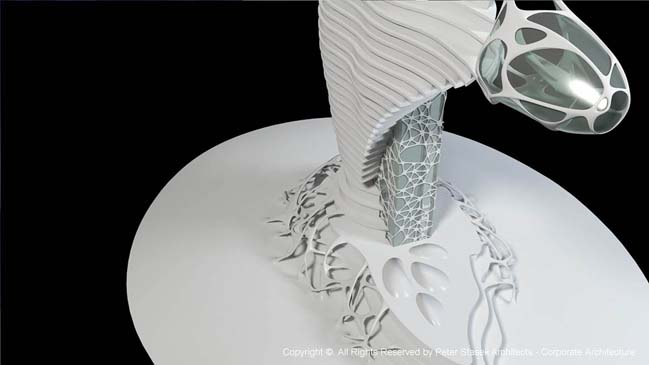 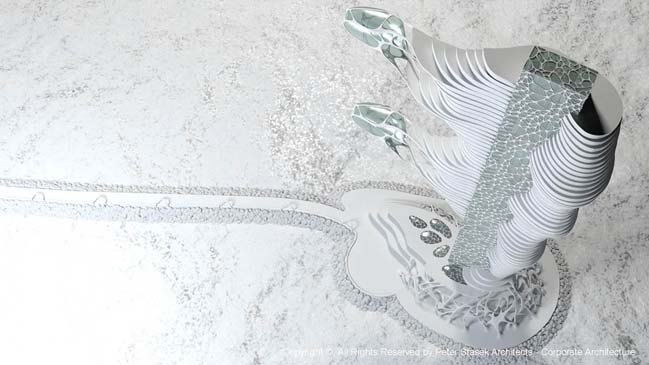