Construction site is located in old neighborhood in Seoul. Despite the plot-division into collective housing area by urban planning in 60’s, variety of scales coexist and time has been gradually accumulated in the neighborhood. 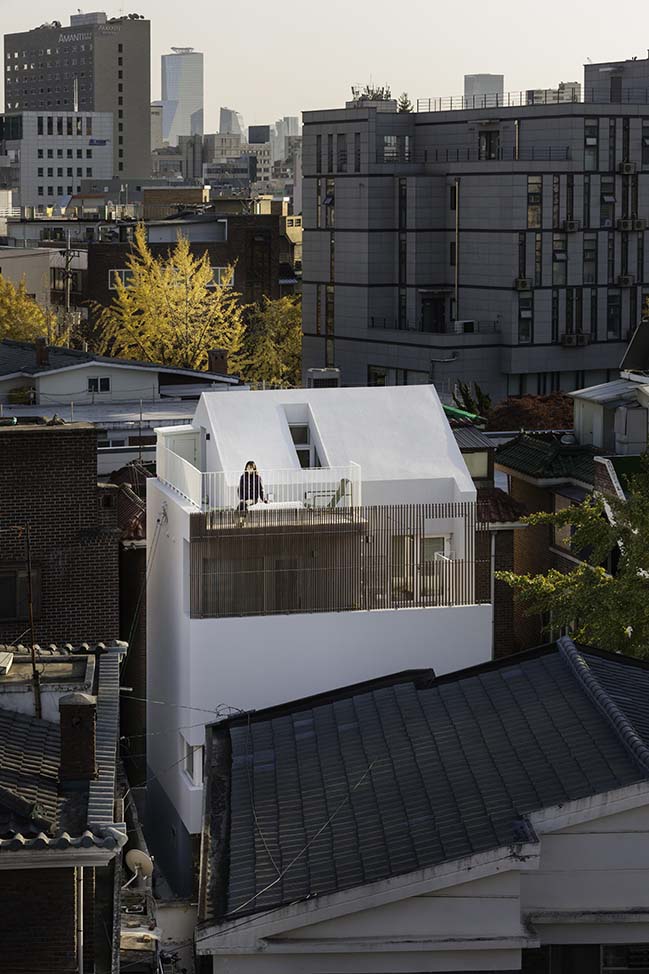 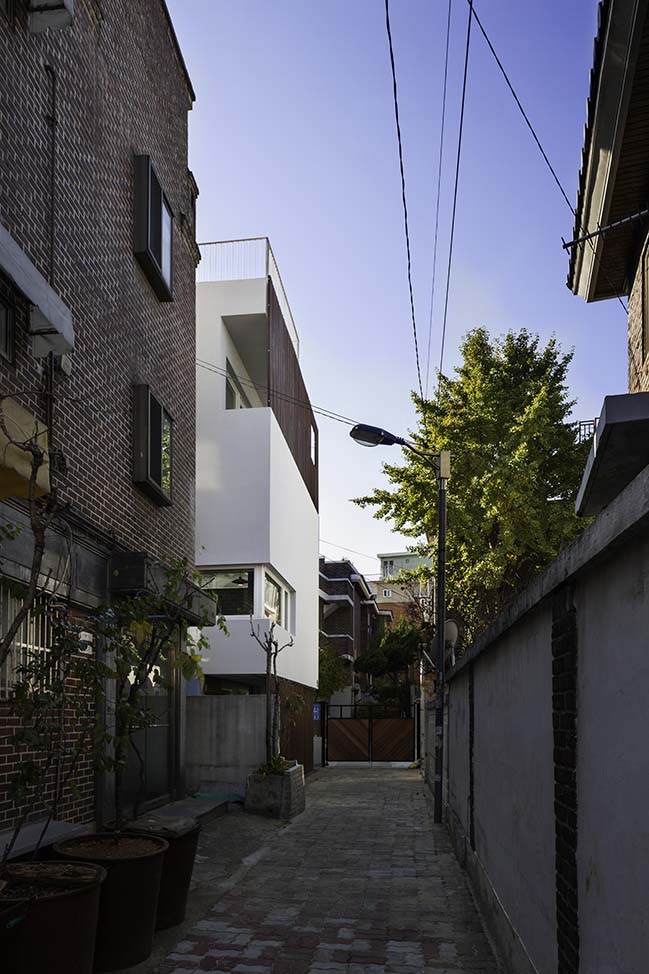 From the architect: To reach the site, you have to go through various scales of roads; an eight-lane road, four-lane, five-lane, and lastly the closed-end 2m road which is only used by three households. Not only the physical scale, but also the people who use the road and the relationship between them differ from each other. People who pass by barely know about each other even though they live in same district, and furthermore don’t make big effort to recognize their acquaintance. 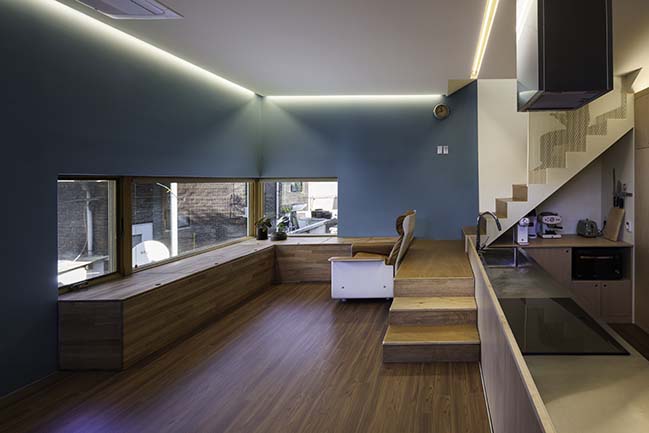 However when it gets to a scale of narrow street, it is not easy to just pass by someone you know. Mutual relationship gets stronger as people keep come across each other and exchange greetings. Narrow and short allies used by few neighbors become privatized, therefore street scenes and space use differ from wide roads. Flowerpots and personal belongings come out to the street and make unique sceneries. The use of the street changes accordingly. Due to these characteristics, Distinction between house and street gets blurred due to these circumstances, and characteristics of the space come to the front. 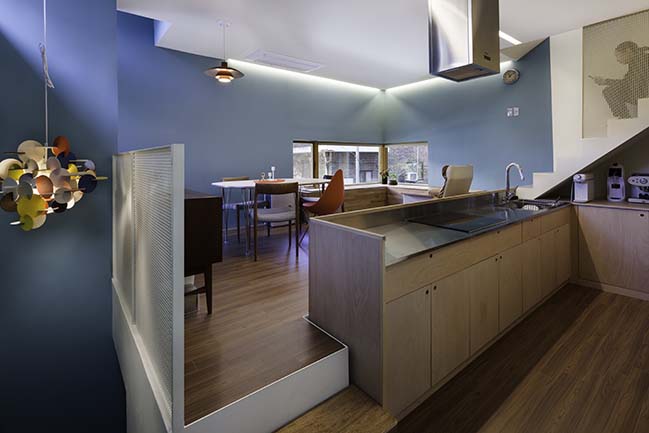 Flexible boundaries found in narrow streets illustrate relationship between houses. We began the project with making flexible boundary; we designed the long boundary facing the narrow alley as sliding doors which allow visibility rather than fence or solid wall. The ground floor wall is set 1.5m back from the upper floor wall, and we composed the 2/3 of the wall with transparent glass. 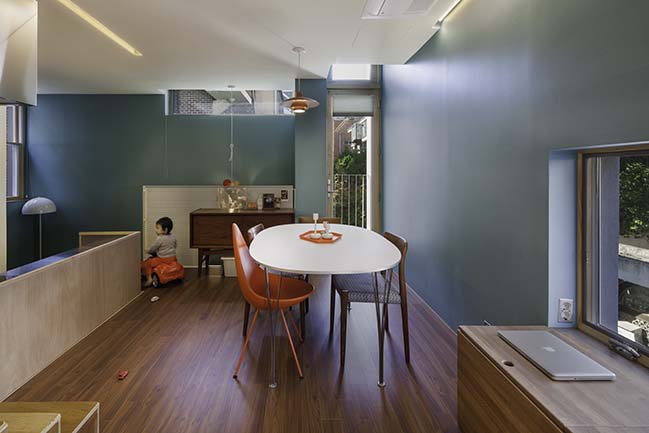 This space is currently used as gallery. This small gallery can secure its privacy by closing the sliding door, or draw people’s attention by opening it. Openness in gallery space is maximized by raising the ceiling height through planning the floor level 1m lower than ground level. In case of the main door to residence which is facing the street, the sliding door conceals it in every condition in order to emphasize privacy. 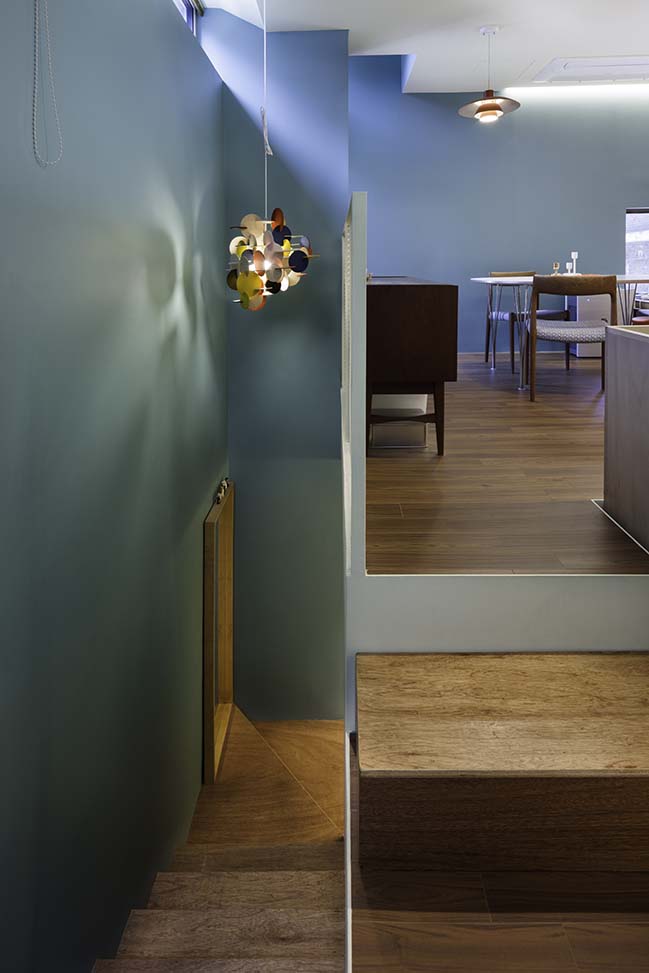 You take off the shoe in the entrance and go right up to the stair. Ceiling is planned in maximum height since the both side of the wall are solid. Wide clerestory window located on the wall meeting the ceiling bring in western sun in the afternoon. Second floor consists of three floor levels. Bathroom and kitchen is located in lowest level and space for living room and dining is planned in next level which is two stair-step higher. The eye level in which you stand in the kitchen and sitting in the living room are the same. There is another two-step stair which has same height with furniture in living room with intent to connect the furniture and stair into one 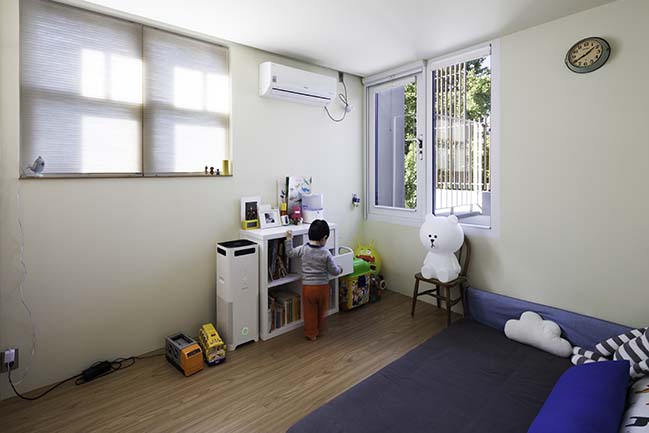 Variety of level difference was proposed for the children who will grow up in the house, and this became the characteristic of the space. If you take few steps higher, you will be standing on third floor composed of study, bathroom, and kid’s room. Each room is centered around the courtyard which is open to the sky. Natural ventilation and lighting are achieved through the courtyard. A terrace is located in front of bathroom, offering a exterior space for lighting and laundries. Lastly, a master bedroom is located on the top floor with a terrace accessible from the room, which is said to be a privilege of detached house. 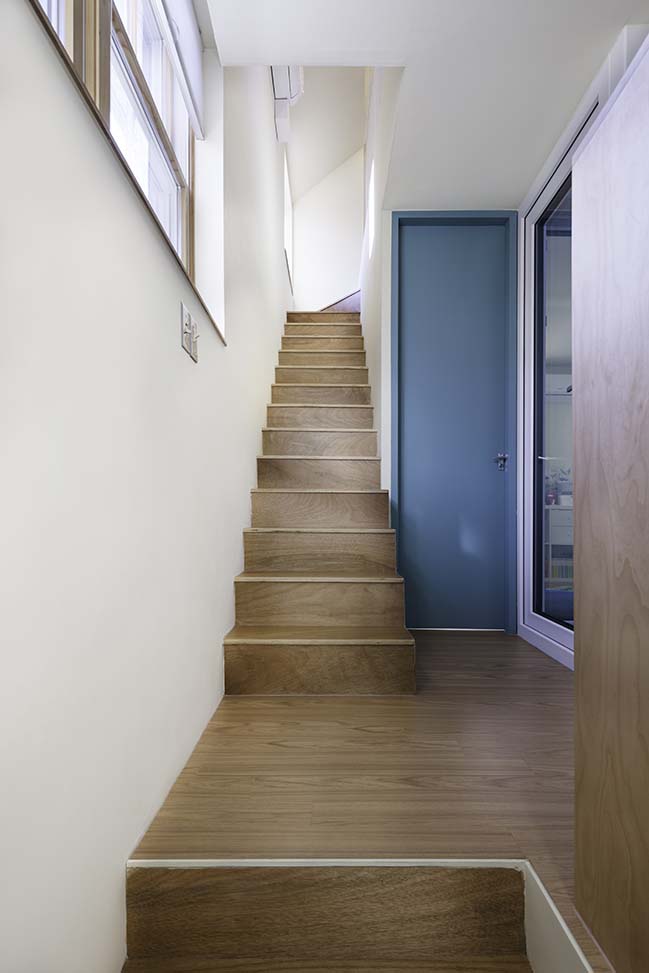 Various spatial compositions, lighting, and ventilation are the characteristics of this house. Diverse activities taking place in the house and relationships between surrounding buildings are deeply considered. We wish this small house to make special and colorful memories in comparison with the large houses before. 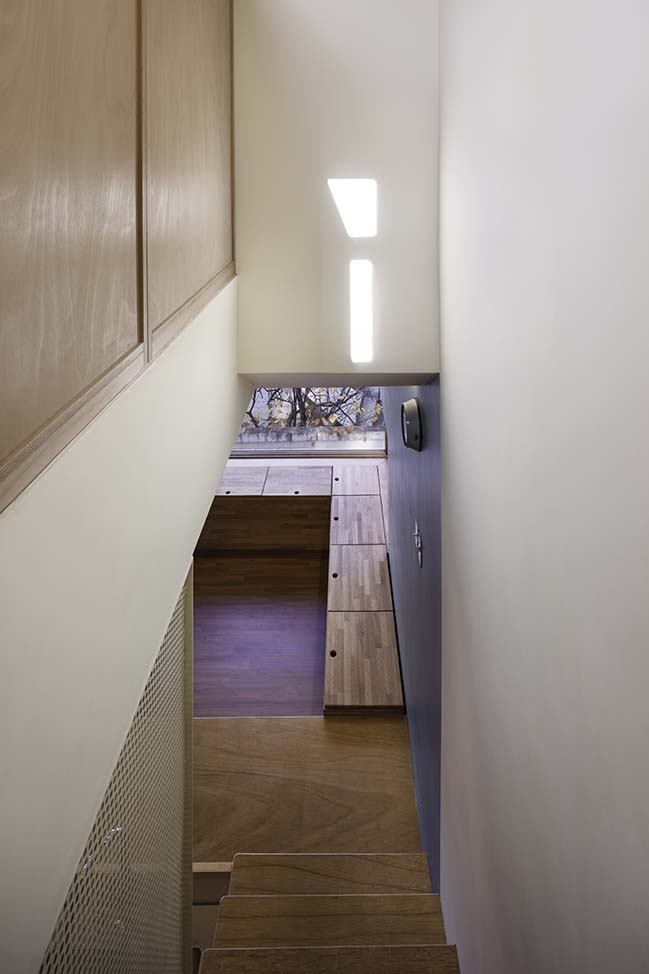 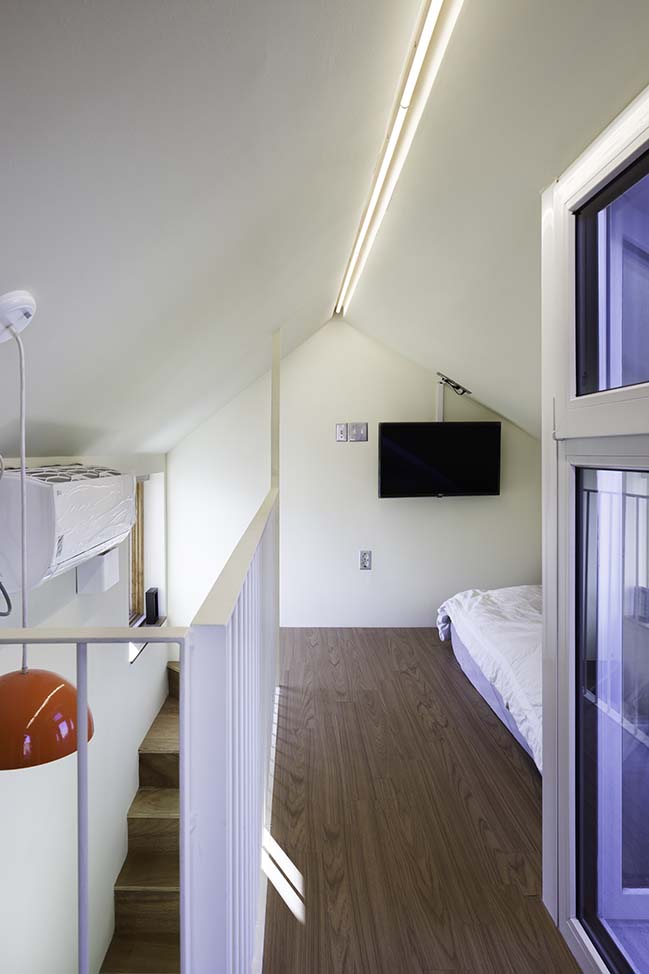 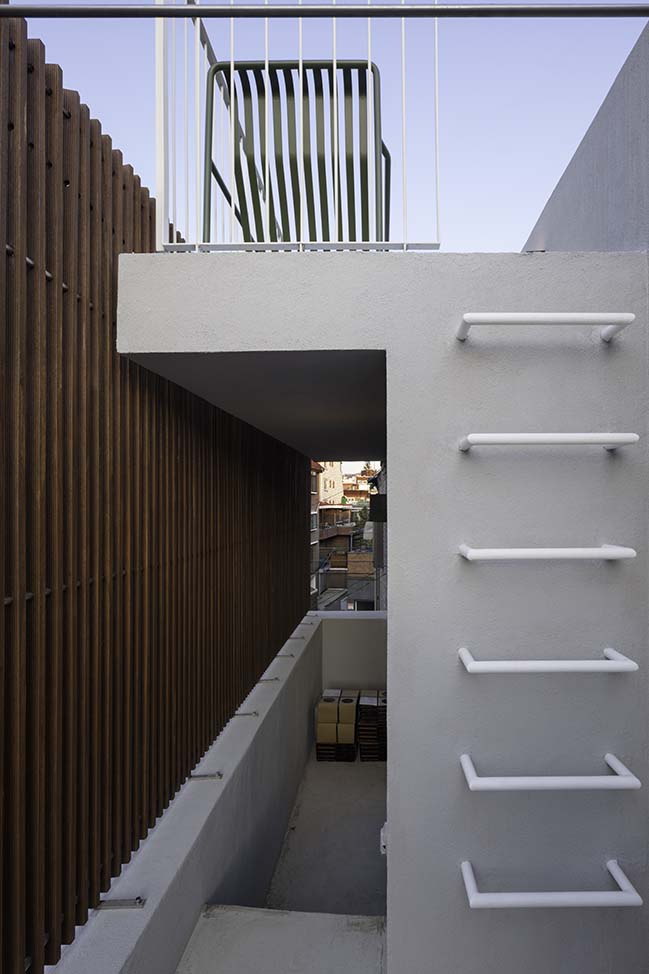 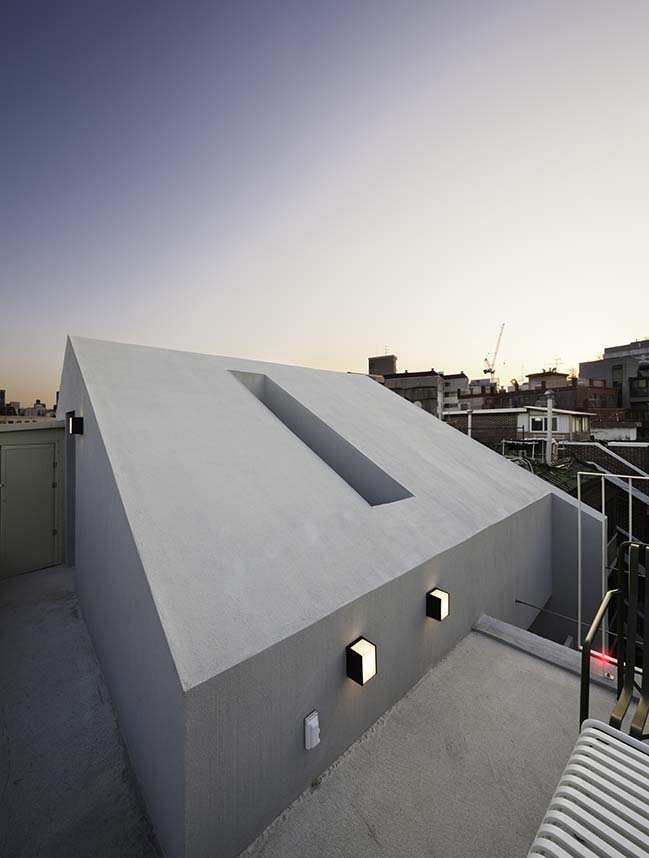 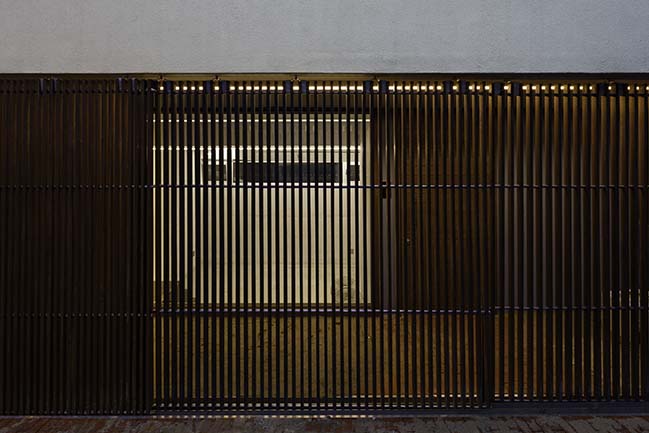 > You may also like: Modern concrete house by Studio Gaon 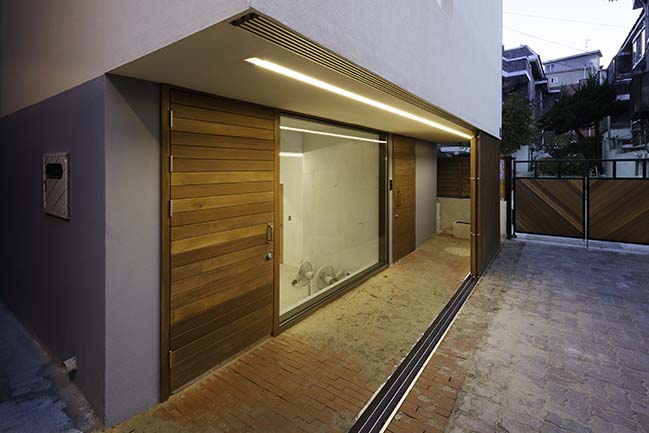 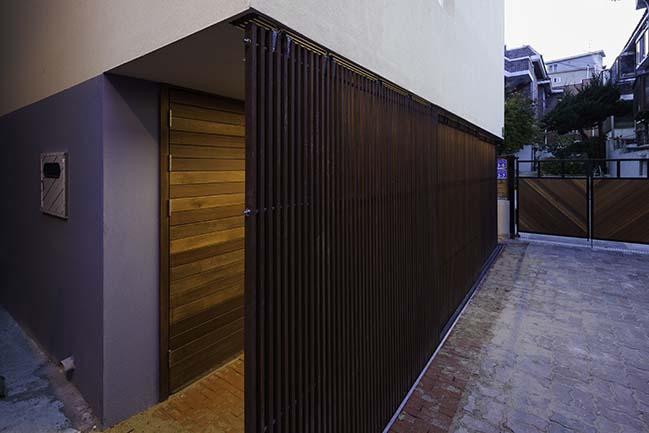 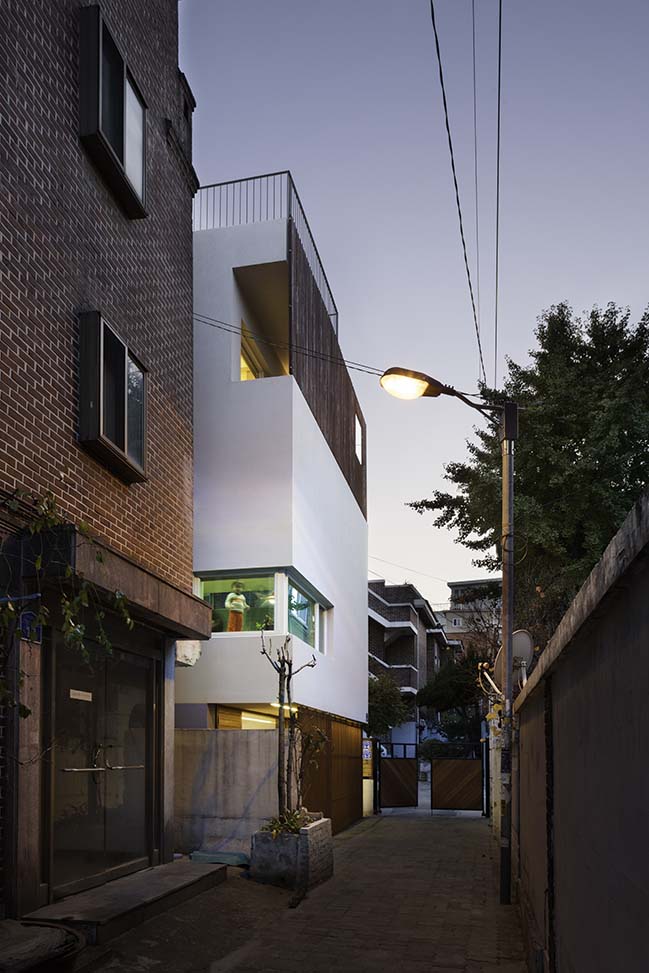 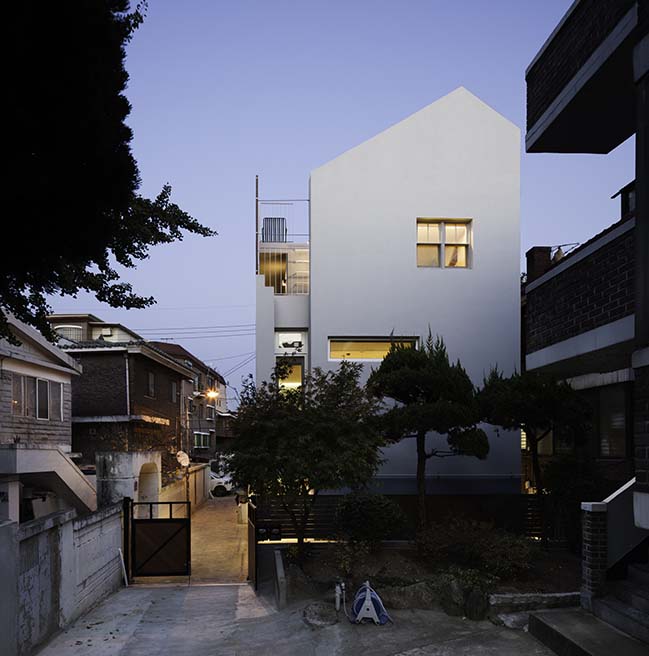 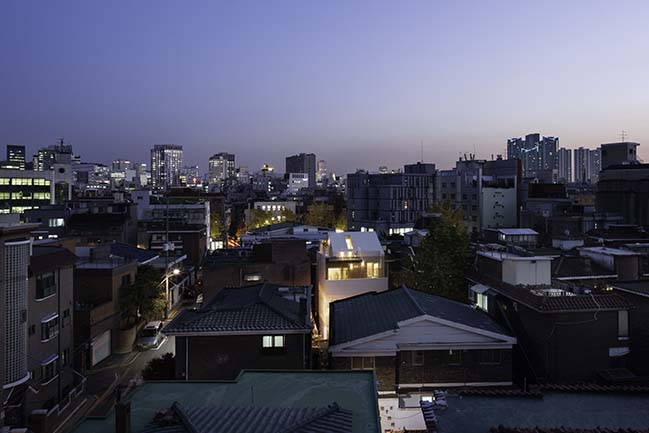 > You may also like: Kangaroo House by Hyunjoon Yoo Architects 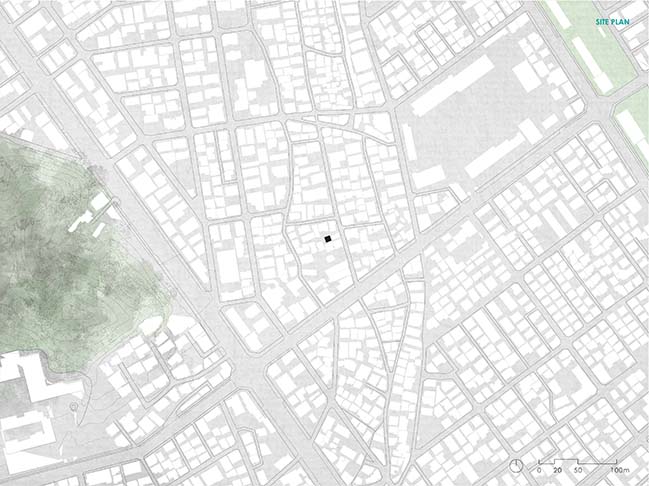 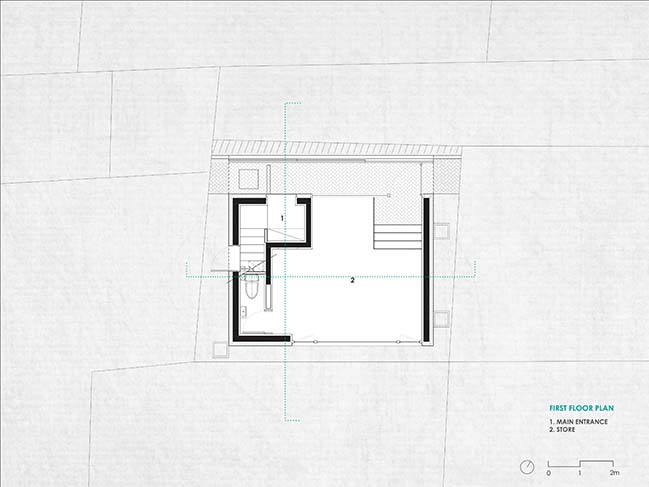 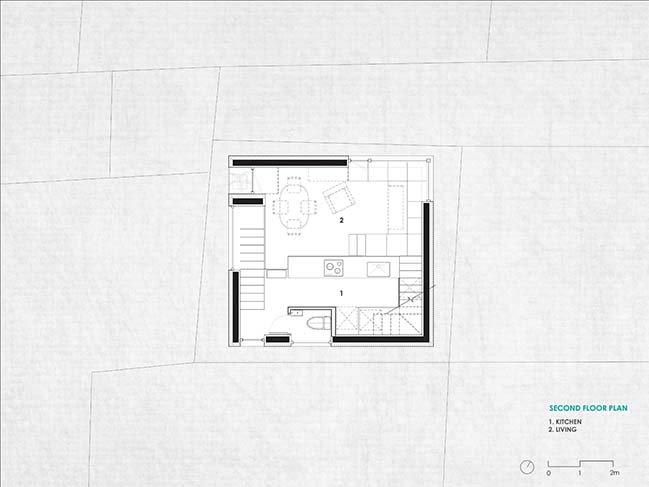 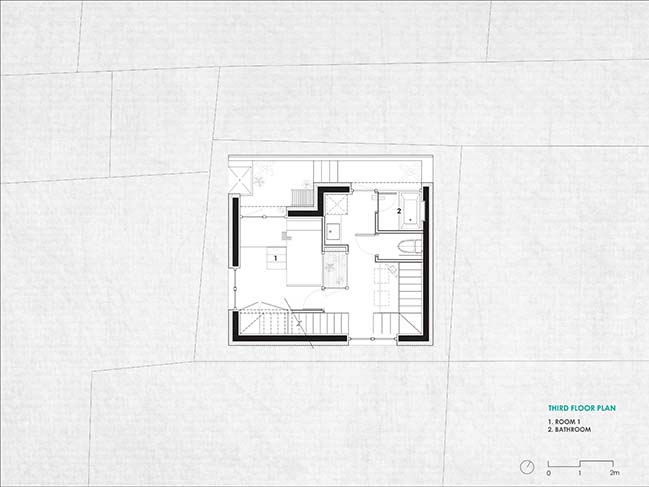 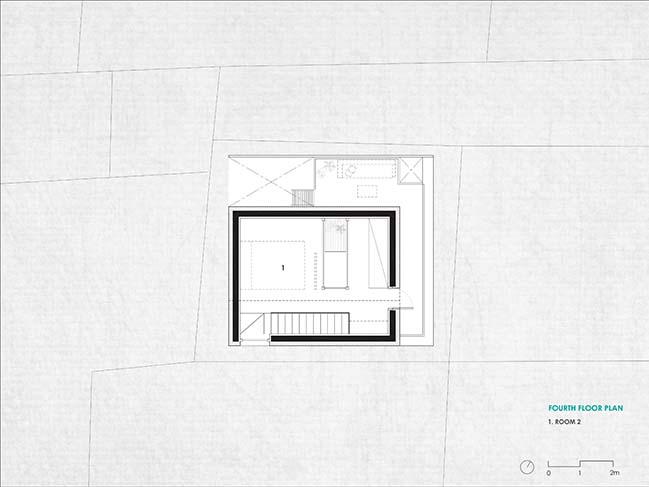 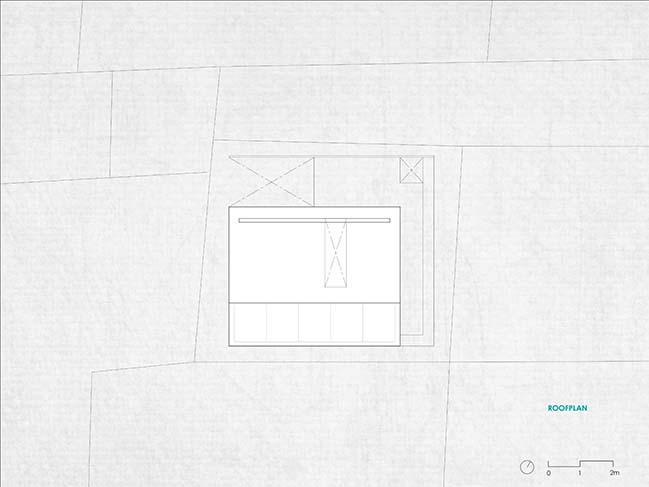 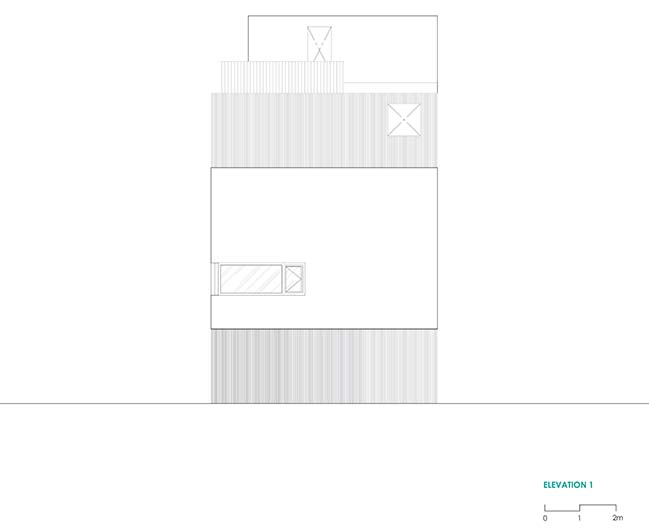 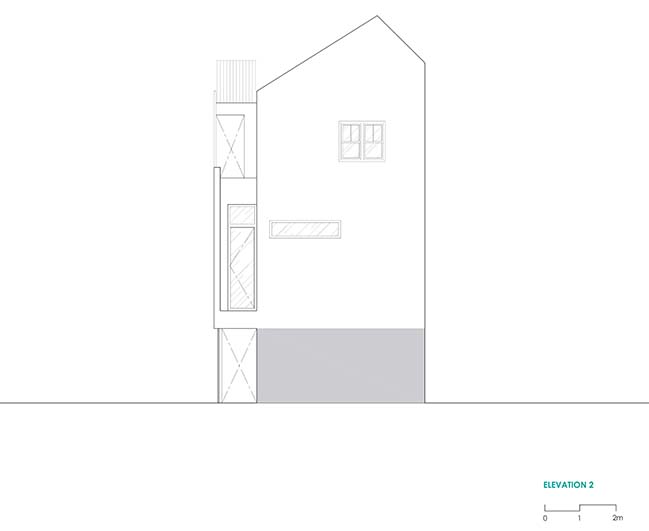 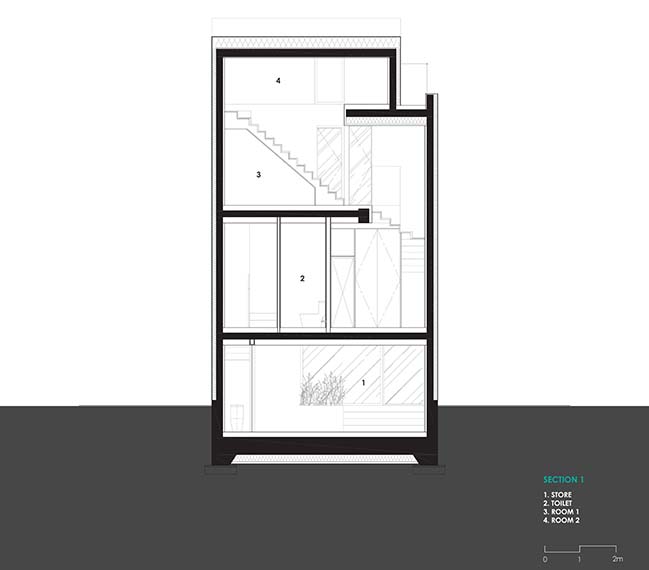 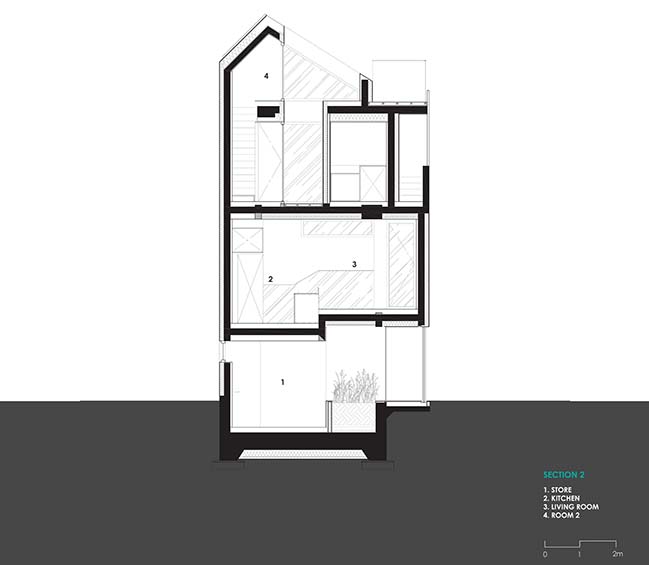 08 / 16 / 2018 Construction site is located in old neighborhood in Seoul. Despite the plot-division into collective housing area by urban planning in the 1960s 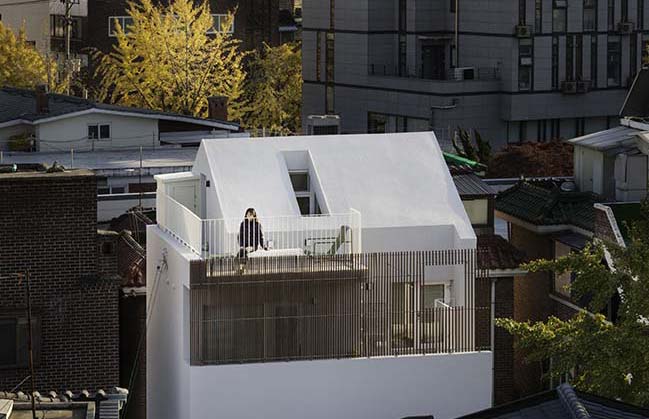