Wutopia Lab was invited by Shenzhen Biennale to rejuvenate the building NO.4 and building NO.5 in Dameisha Village. The urban-village is a slum with Chinese characteristics. Architects hope to break the invisible limit between the city and the village through the activation of the site. 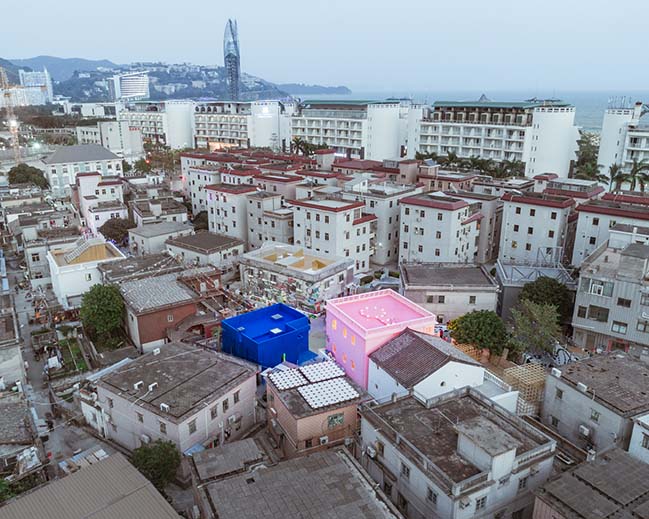 From the architect: The most basic human desire is to exist and live. Through the reflection on the case, Wutopia Lab found that public kitchens are mostly in the charge of men, while women remain the main role in family kitchens. 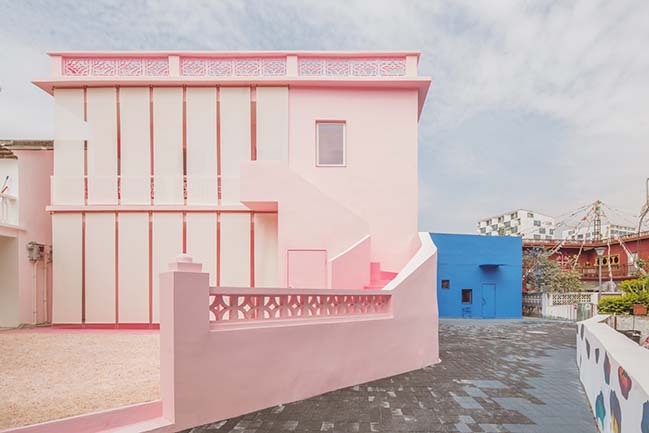 His house
We use blue to paint Building NO.5 façade, blue is a symbol of survival and competition. The interior refers to Matisse's paintings, painting the walls green in correspondence to blue ceiling and floor. Building 5 has three rooms and a public restroom. Using triangles that appear on the doorknob and the door hole as the motif reinforces the masculine character. 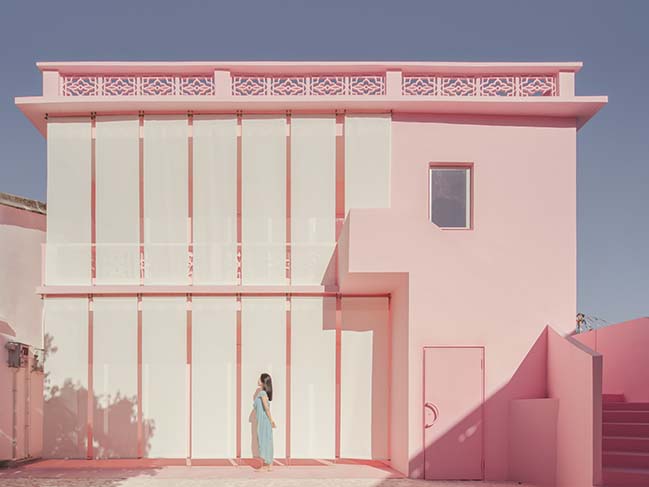 The desire for survival forces people to develop the ability to preserve food for longer, and human invents bacon and wine. Salt fields have a long history of bacon, and in this male house, bacon become the first exhibit. We made a white secret room with sky light, and the floor is covered with white salt to show the history of salt fields. In the main interior space, we set up beer ponds, and the whole wall is decorated with empty beer bottles, which reveals the theme of "Wine Pool Meat Forest". 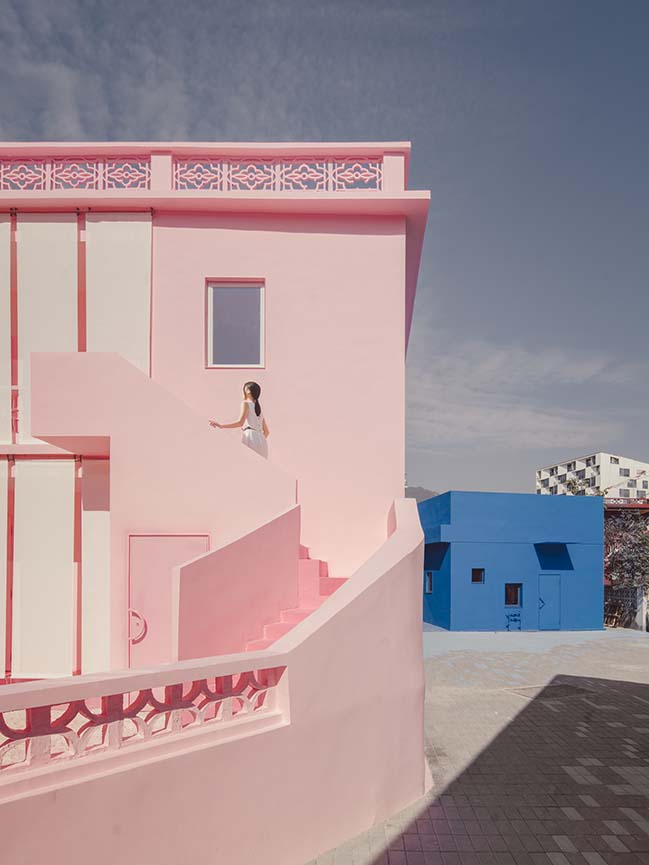 Her House
The sensitivity, delicacy, delicacy of the existence created by women and man desire for existence contribute to the duality of each other. Carefully compared among the different pink colors and deciding to use light pink as the follow of green and using pink to brush all over building 4. 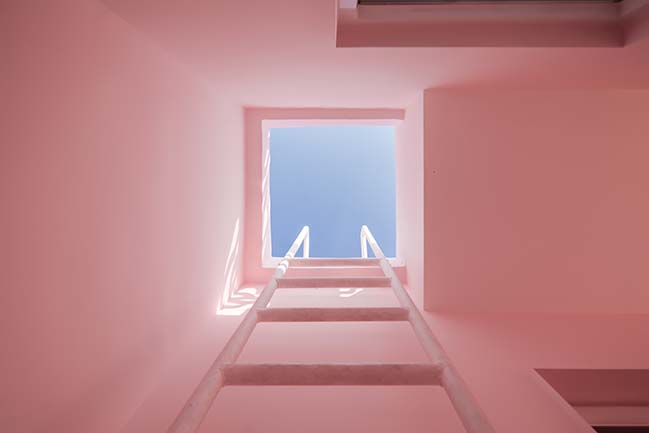 The rejuvenation of building 4 and 5 retains the original irregular window’s open, which is open according to the needs of different tenants at different times. Instead, these irregular windows create liveliness on the facade. The shutter doors were also turned into large glass windows, and the building opened to the square, allowing viewers to observe each other. 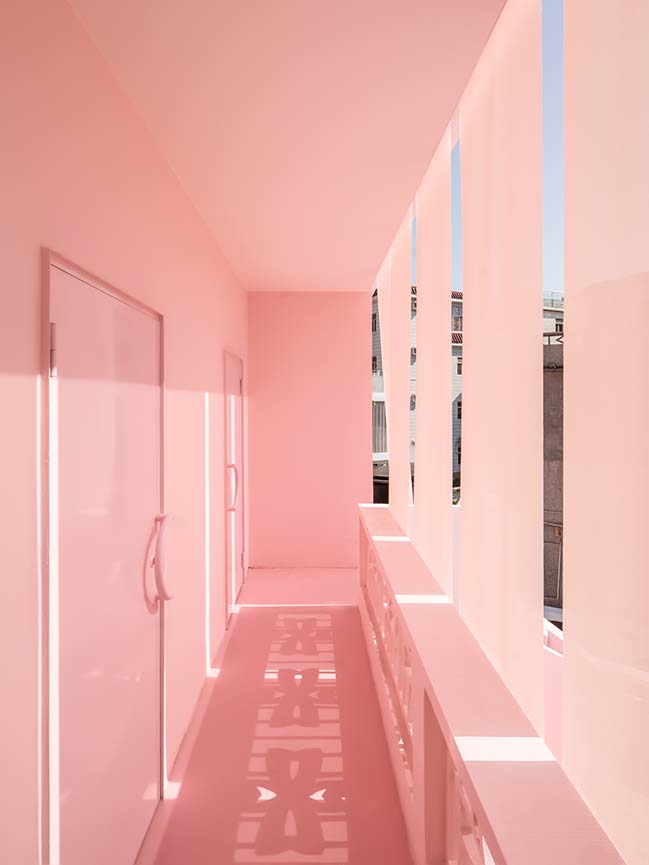 The patio is covered by pink rock salt, a hint of foundation contrasted with building No.5 before entering the pink house, it reinforced femininity character by a semicircular motif that appeared on the doorknob and in a doorway that connected with different spaces. The architect made holes in the walls of the original independent room, making space connect with each other freely. The intersecting of the doors holes caused the labyrinth’s hallucinations of in the room. 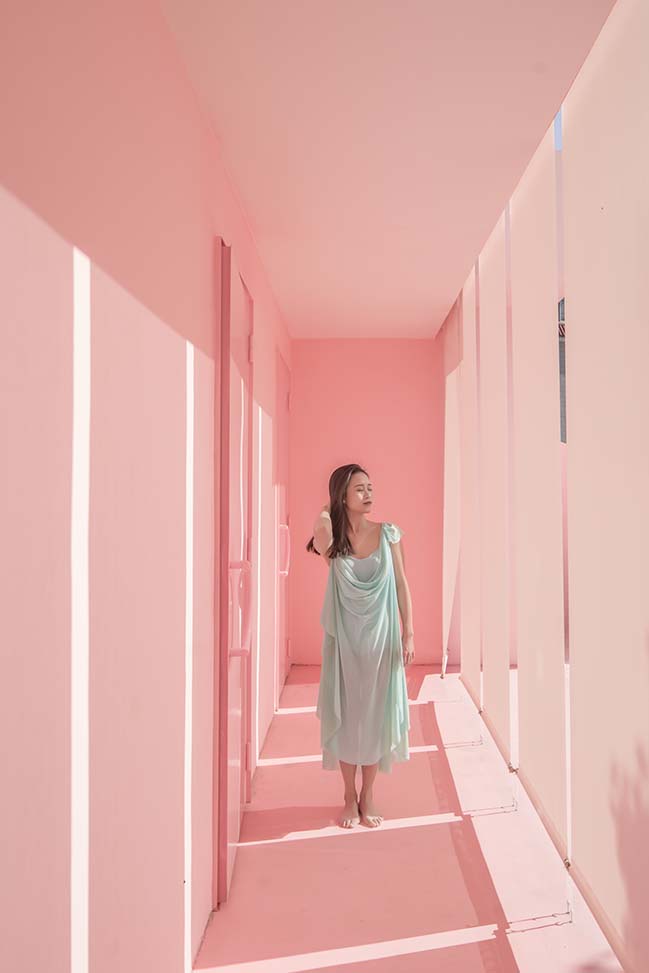 The curtain that like veil wrapped facade, implying the introversion of female life, and creating a new facade in front of the original balcony, on which a thick level is created. 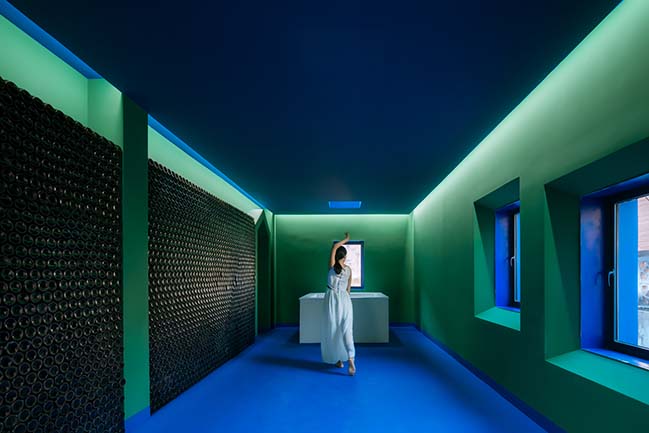 The House of desire is the Manifesto of the Village in the City trying to regenerate
The urban-village shows a life attitude of using local material and using originally. It's rough but full of vitality. Color is involved in the urban-village, pink represents women, and blue represents men, inherited the urban-village’s courage without worry, Painting pink and blue was not the idea that referring to nothing. They had been existed in the city as insulation materials for a long time. 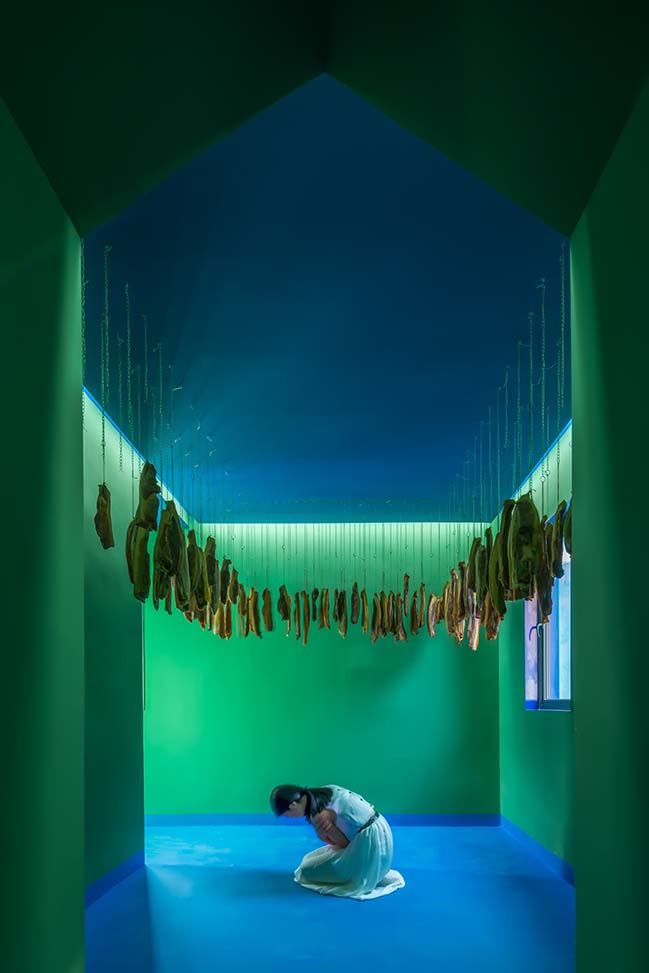 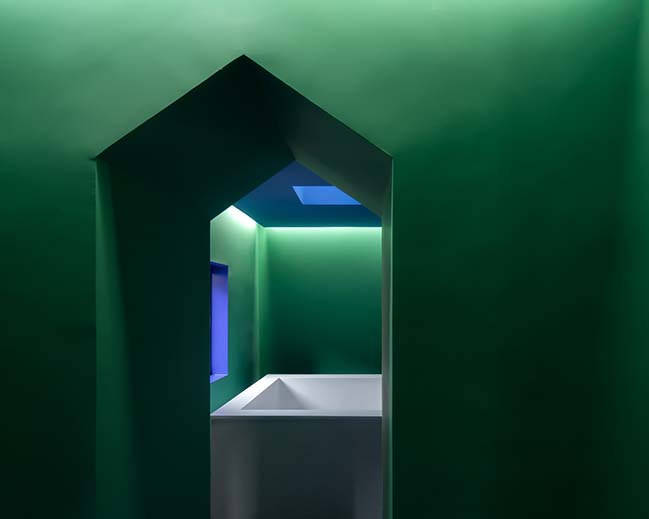 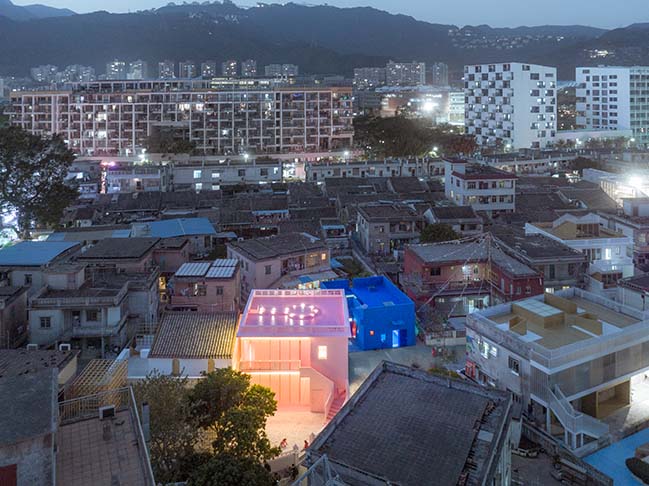 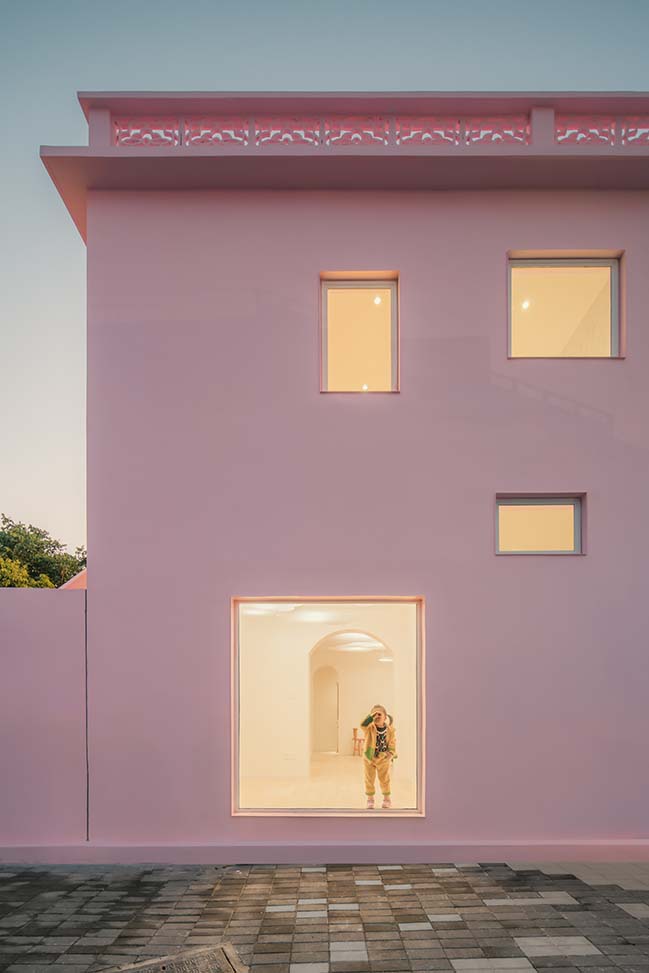 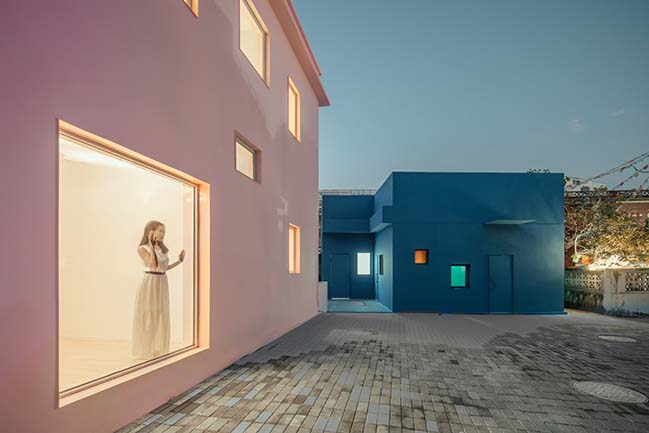 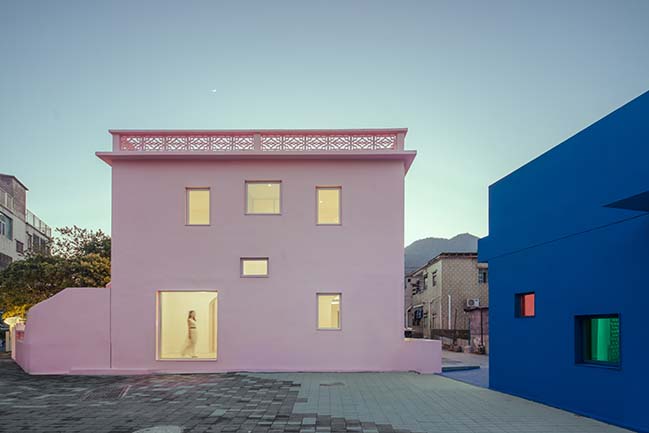 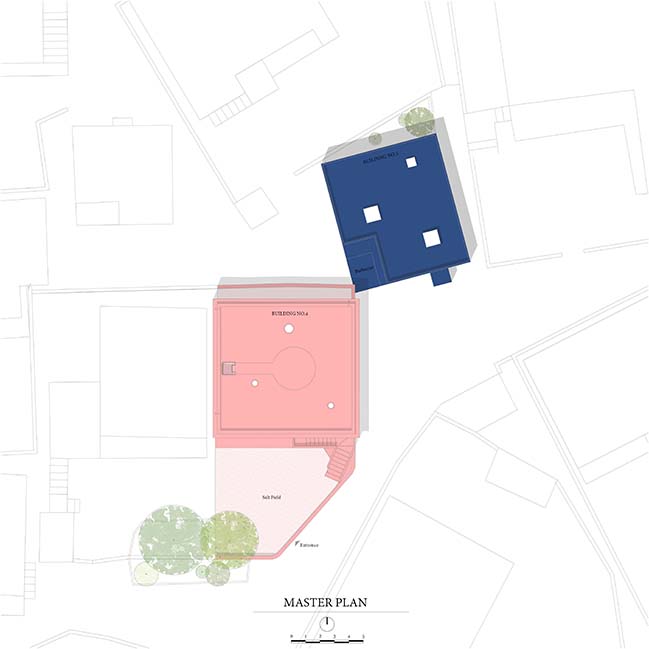 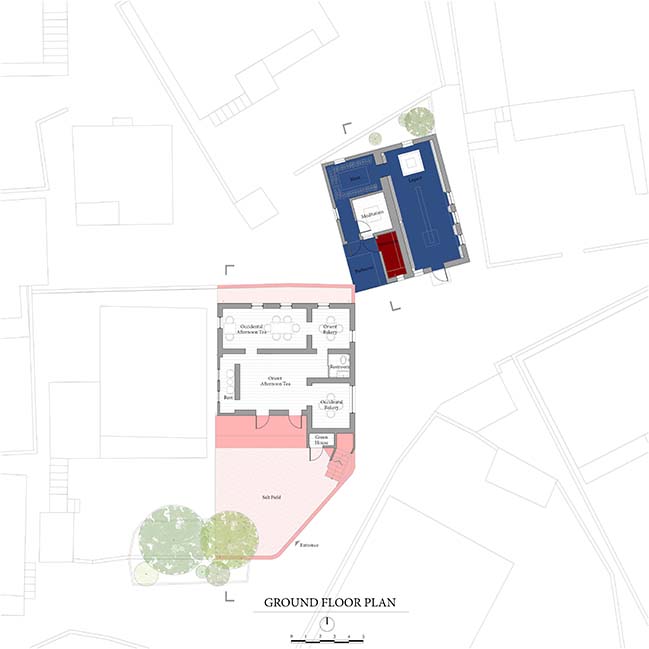 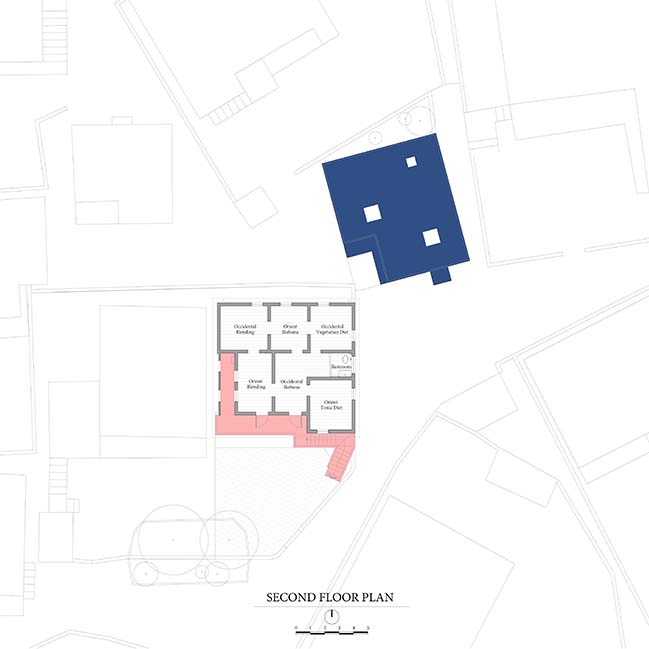 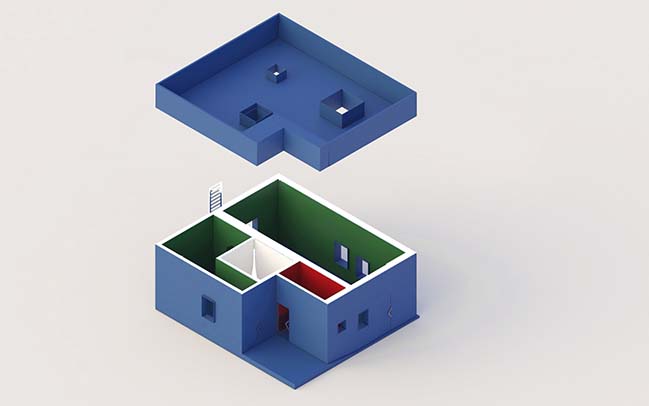 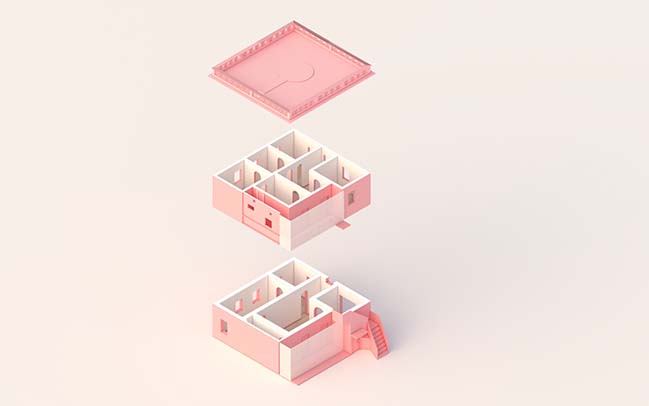 02 / 28 / 2018 Wutopia Lab was invited by Shenzhen Biennale to rejuvenate the building NO.4 and building NO.5 in Dameisha Village 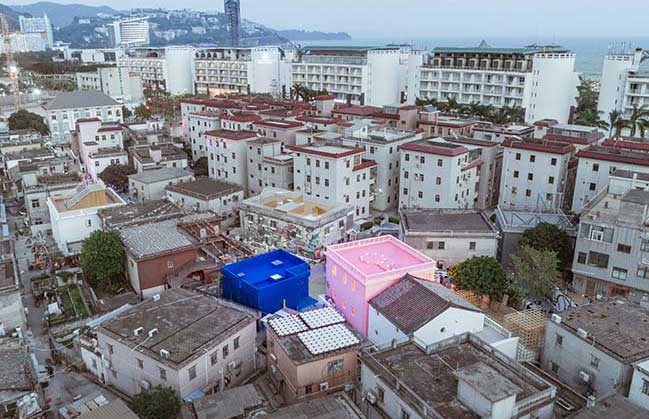