Bedrock House is a sequestered house. It is a house for one, for two, for a couple; a house which draws its power and identity from the energy of its location and its own particular scheme. 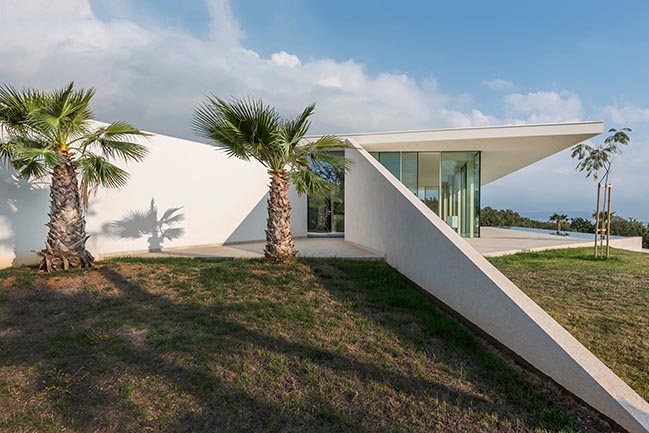 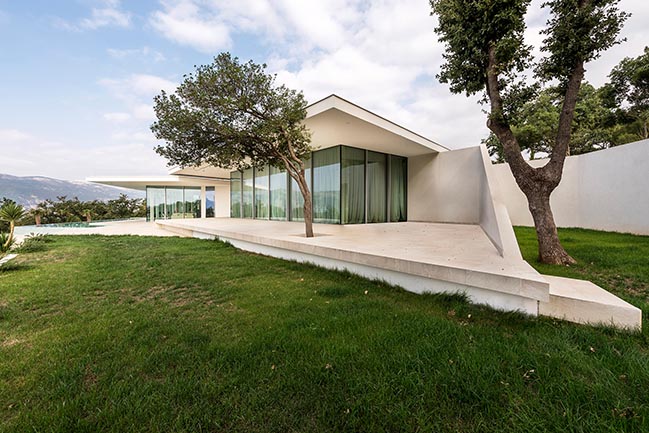 From the architect: The house absorbs the natural context into which it is placed: the Mediterranean landscape, the topography of the ground, the unobstructed vista of the sea, and employs them as generators of a specific architecture. Situated in the woods, the house becomes a confluence of three different biotopes: the preexisting oak forest, the craggy Mediterranean garden with its cacti, agaves, lavender and spartium, and the large stretch of water - the pool - surrounded by palm trees. 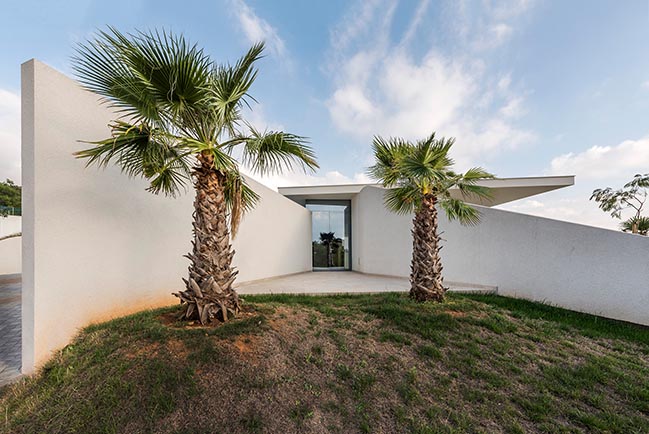 The design of Bedrock House arose from the dichotomy between walls and agendas, thus creating space along the course of two walls, underneath two shifted roofs, embodying an architecture constructed at the juncture of transparent and opaque, interior and exterior, closed and open, private and public, recreational and residential. 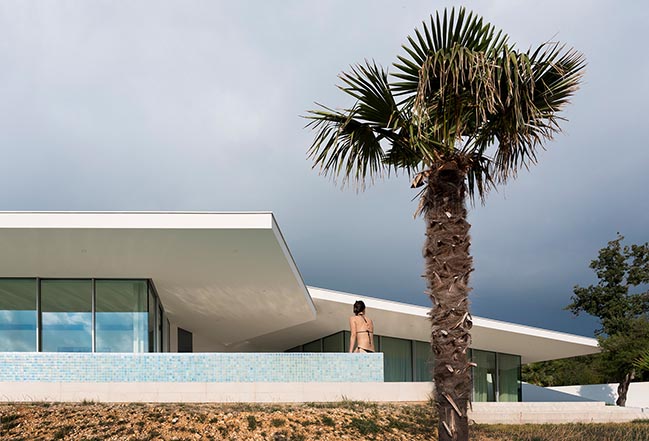 Bedrock House employs two continuous walls in order to divide and unite, break away from and come together with the topography as well as the arrangement of activities taking place within the house. It extends from east to west, hiding from and closing off towards the north while fully opening and exposing itself to the south. In between the two tall walls are all the necessary amenities and household appliances to accommodate a variety of agendas and activities. 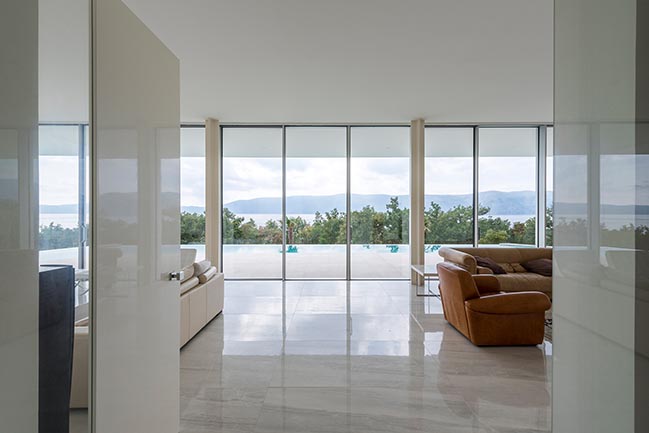 Bedrock House exhibits no typical hierarchy, it has no windows, no facade, no rooms or closed off spaces; it is made of two walls, two roofs and two interiors. The execution of the house is straightforward and the technology widely recognizable, in concrete, steel and glass. Its programs and activities are ‘supported’ by the generic white furniture: Mies Van der Rohe loungers, Charles and Ray Eames chairs, Chesterfield sofas and recliners - the expected components in the context of sought-after modernity, which serve as a neutral framework for the acting out of endless possibility, of unforeseen gestures and events. 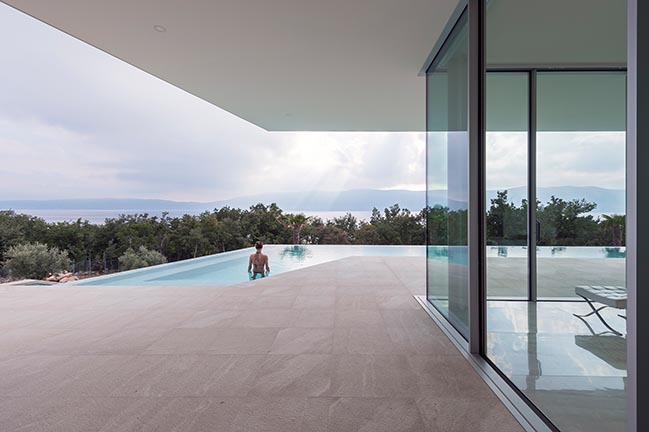 The house was imagined, inspired and executed by way of simultaneous trials in various abstract tracks, consecutive sampling of quotes and chosen architectural motifs as well as the corporeal examination of the materiality of the wall, column, eaves and roof. The house has been contextualized beyond specific trends - it is a universal structure, built of generic elements of modern architecture which comply to the requirements of a specific location, agenda and activities which the house enables. The house refuses to be defined by a color; at the same time it is white, transparent, translucent. It is cladded in travertine, laid on grass and Mediterranean herbs, cut into a limestone rock, precisely placed into a pre-existing fold at the vast site. 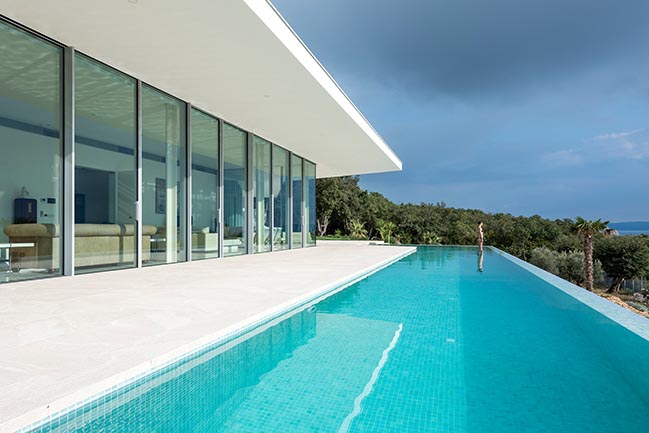 Bedrock House draws its energy from its dimensions, its height, the light, from the proportions, orientation and deliberate juxtaposition of chosen architectural features. It becomes a projection screen, a frame to a Mediterranean inspired painting, a pedestal for artefacts, a scene of the enactment of the screenplay of life, a vantage point on the world, a podium and a shelter of diverse utility. 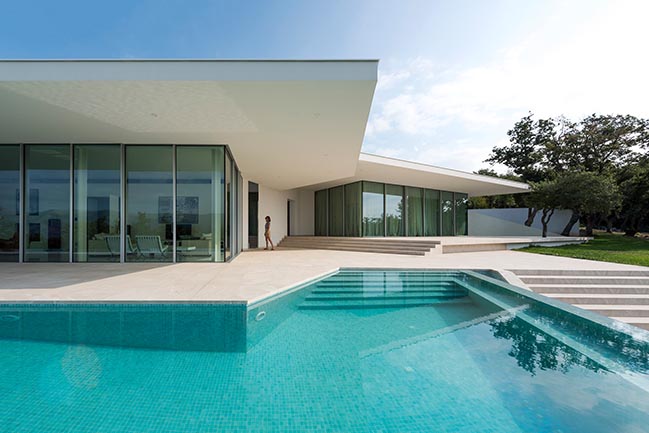 Bedrock House was built on the derivation of numerous drawings by the Croatian painter Oton Gliha, on the clash of ground and wall inspired by the American artist Richard Serra’s work Shift, the motifs of the English painter David Hockney as well as the principles of the American architect, professor Pierre Koenig. 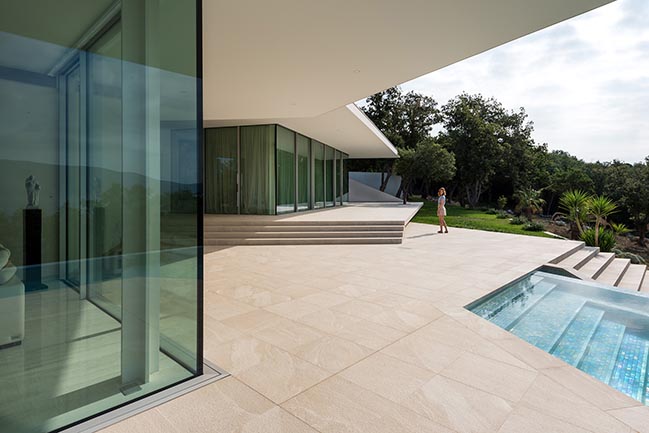 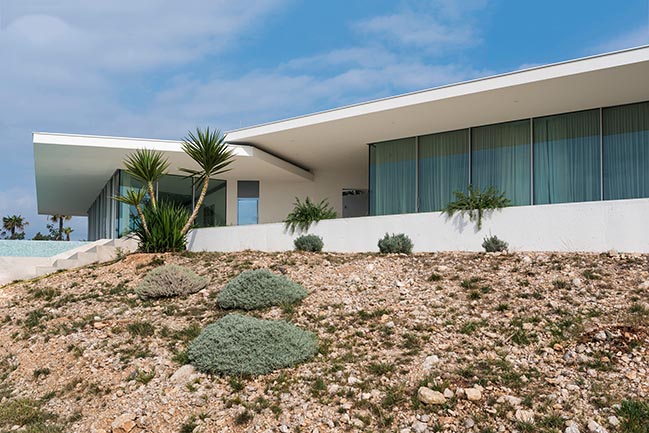 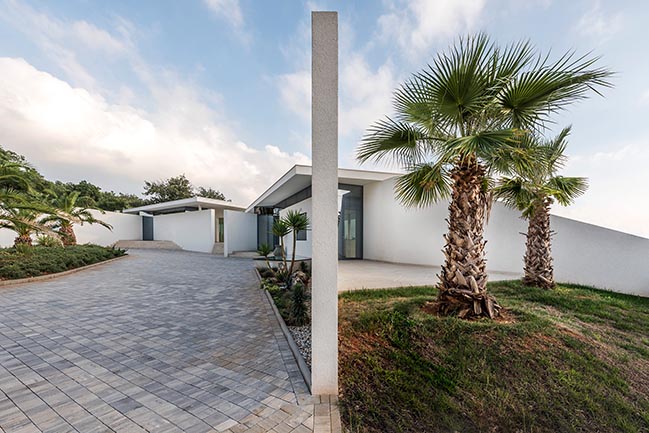 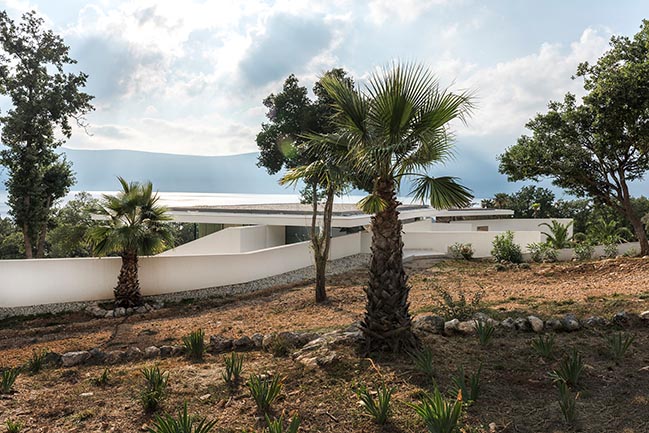 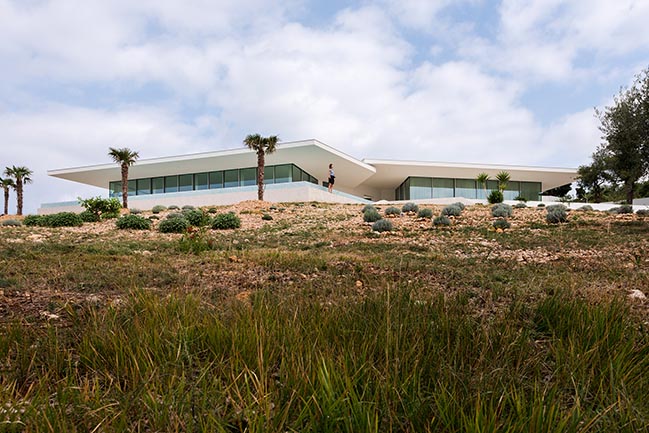 > YOU MAY ALSO LIKE: Hofmann House by Fran Silvestre Arquitectos 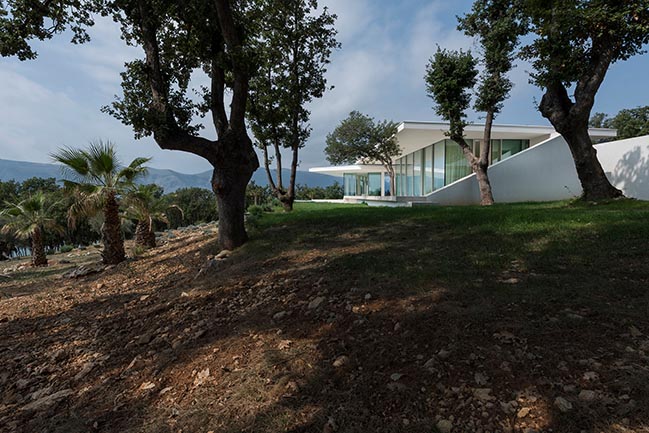 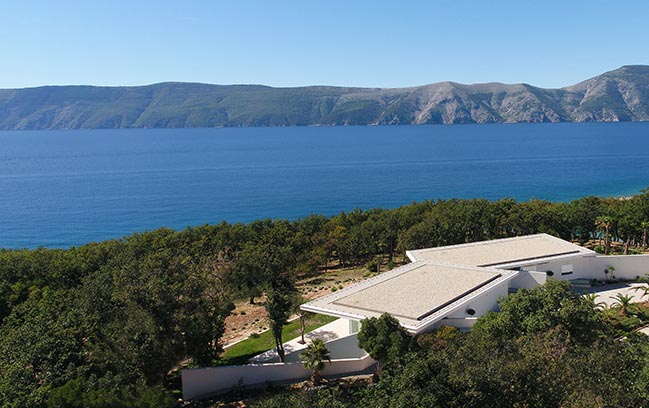 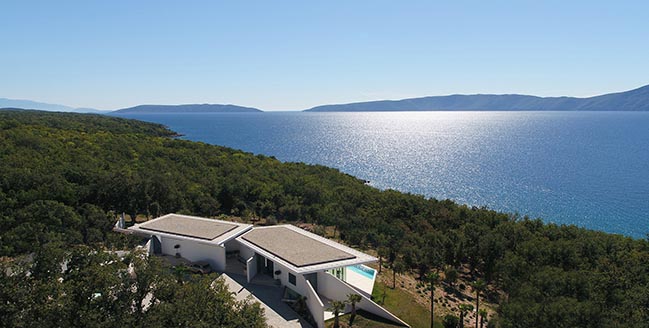 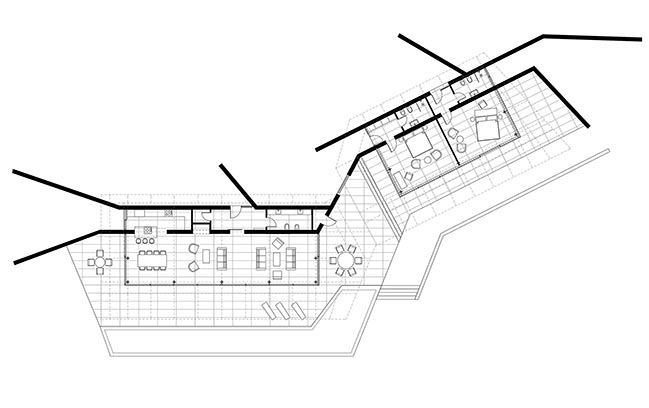 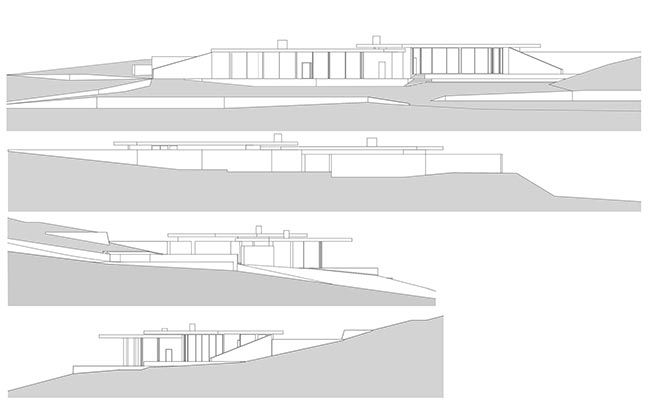 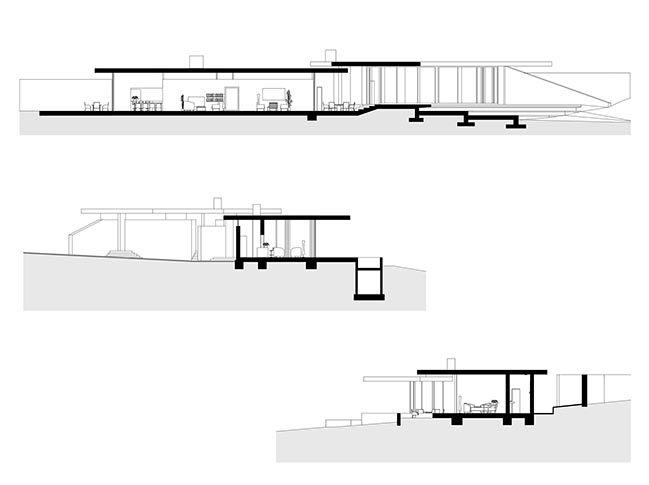 01 / 20 / 2019 Bedrock House is a sequestered house. It is a house for one, for two, for a couple; a house which draws its power and identity from the energy of its location...