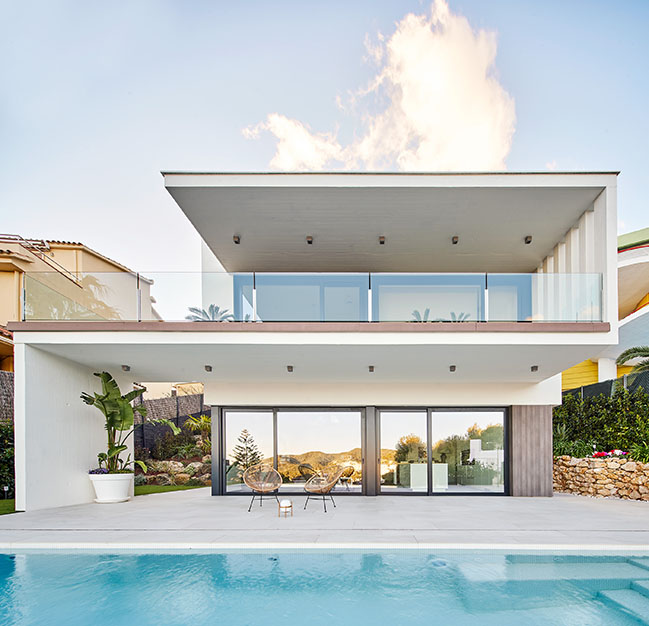 From the architect: The house is located in a slopy terrain which has the virtue to be localised in a fairly high topographic altitude, due to this, with visual orientation to the litoral mountain range, the urban center and the sea. It also takes part in the formation of Vallpineda residential area, one of the first urbanisations that were developed in the city of Sitges. 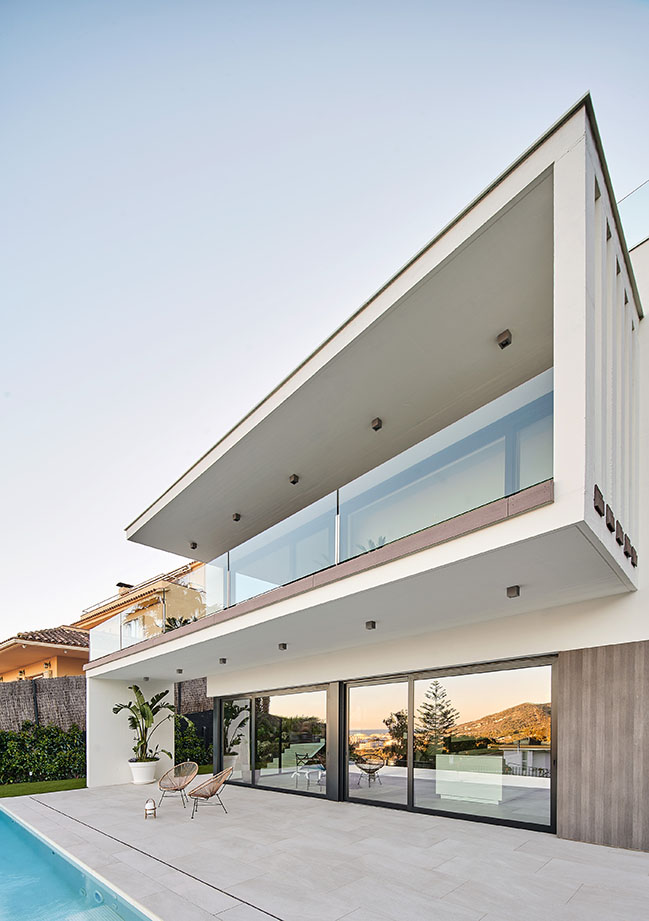 Not only the initial observation of the site revealed that the original topography of the empty plots had been modificated notoriously in the past, but also they had been disagreed with the urbanistic regulations about the land movements that were allowed to do. In fact, both neighboor’s adjacent plots had land increseaments because it was wanted to have both houses as highest and nearest to the street as possible; nowadays, with the actual regulations, it couldn’t be possible. Due to this condition, it is decided that the new building can`t compete to be higher than the neighboor’s existing ones, and because of this reason, the project adopted the strategy of being introduced and built into with a unique and diferente landscape performance: the house will be arranged gradually to the natural slope of the land, in order to achieve that its volume lengthens as long as possible towards the lowest topographic elevation. This strategy is decided to achieve the highest number of visuals and natural light as posible, and, moreover, to guarantee the views to the sea from each of the three floors that will organise the structure of the house too: the garage/studio floor, the night floor and the day floor. 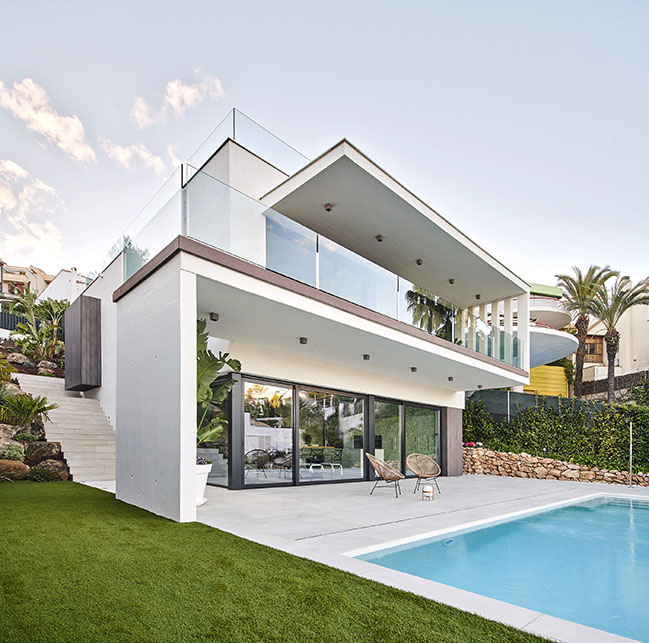 The garage/studio floor contains the driveway to the house, a vehicle parking space, storage spaces, a study and a bathroom. To avoid the circulation of vehicles to the parking lot from conditioning the unbuilt spaces of the site, the garage is located at the level of the street access level, providing this floor with a concept of a differentiated piece from the rest of the house. in addition to being connected by elevator. This differentiation ends in the location of the main entrance to the house on its middle floor: the night floor, which contains a suite room with bathroom and balcony, three bedrooms and a second bathroom. This main access configures its own characteristic space of the house, formed by a wide reception area that connects horizontally with the night area, while vertically connecting with the day floor through a light metal staircase and a double space, part of which it forms part of the living-dining room on the lower floor: the day floor. 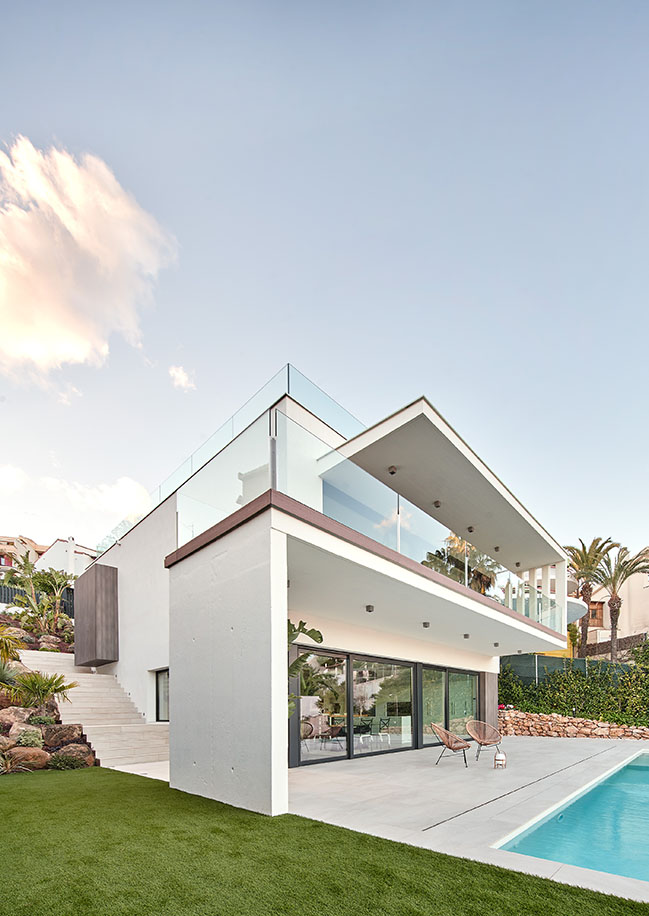 The day floor includes the kitchen, the pantry, a third bathroom, the living-dining room and the facilities space. It is the heart of the house. Located on the lower level of the three that make up the house, we find a unique space where the uses of the living room, dining room and kitchen coexist, directly connected with the elements that make up the most immediate outdoor space: the main porch of the house, pool, barbecue and garden areas. 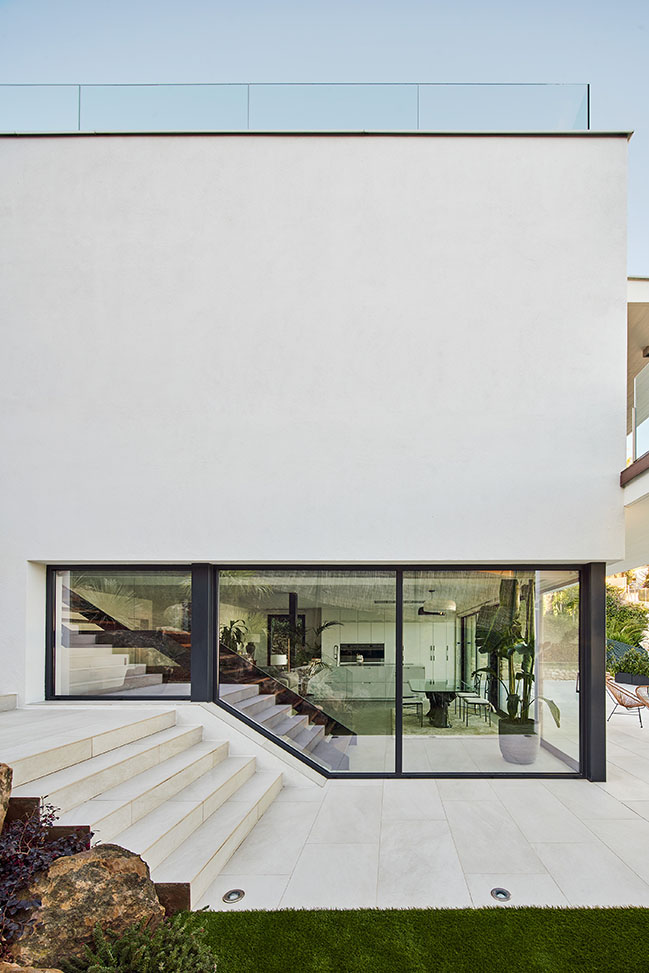 The construction has been executed using a mixed structure of reinforced concrete combined with a metal structure. The materials that make up the natural and/or anthropomorphized landscape that surrounds the house, such as Mediterranean vegetation, water, wood, white volumes built with a coastal Mediterranean aspect, among others, are adopted in the project as constructive elements or finishing materials, becoming in landscaping, paving, swimming pool and/or vertical surfaces or finishes of the house. The exterior treatments of the spaces that surround the house are projected alternating lush natural vegetation, softer landscaping, paved areas, swimming pool and transition stairs between the different final topographic levels; to whom the project shows a will to respect and integrate them; with the aim of offering a comprehensive reading of the building and its exterior treatment. 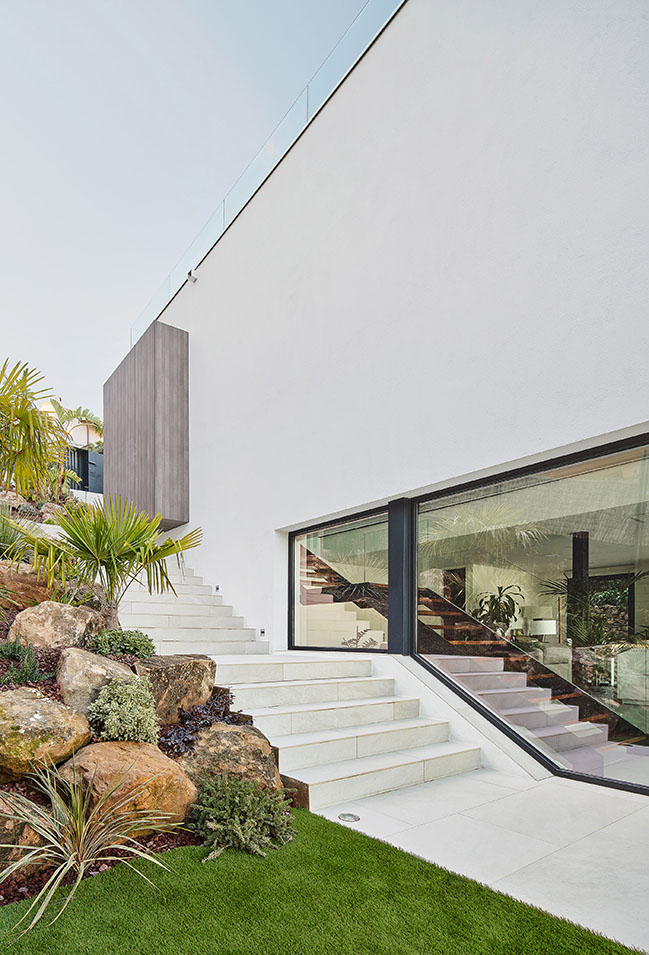 Energy efficiency has been a premise in the conception of this house. The project proposes, in terms of light control, both direct and indirect, openings that are distributed where thematically best can enhance the characteristics and visual and thermal needs of the property. The structure of the house itself provides passive solar architecture solutions, through porches of different dimensions. The rainwater from the roofs is collected in tanks and reused to irrigate the garden area. At the same time, the house integrates an air conditioning system using aerothermal technology, which together with the thermal insulation proposed in the roofs, the construction system itself and the exhaustive study of the composition of the different skins of the building, have made this house have obtained an energy certification A. 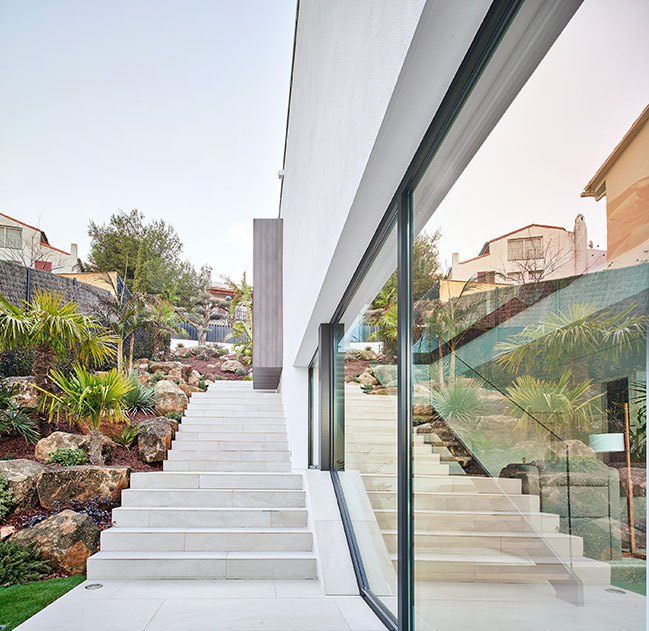 The content of the house is resolved by integrated furniture that enhances the spaces of which it takes part in. The interiors are simple, comfortable and practical, with a series of elements that seek to achieve one goal: to create a welcoming, friendly and connected home with the outside world. A fact that is achieved through openings and a pavement with a stone texture that crosses the house from the outside in and from the inside out, and the use of neutral colors and warm woods for the rest of the materials. 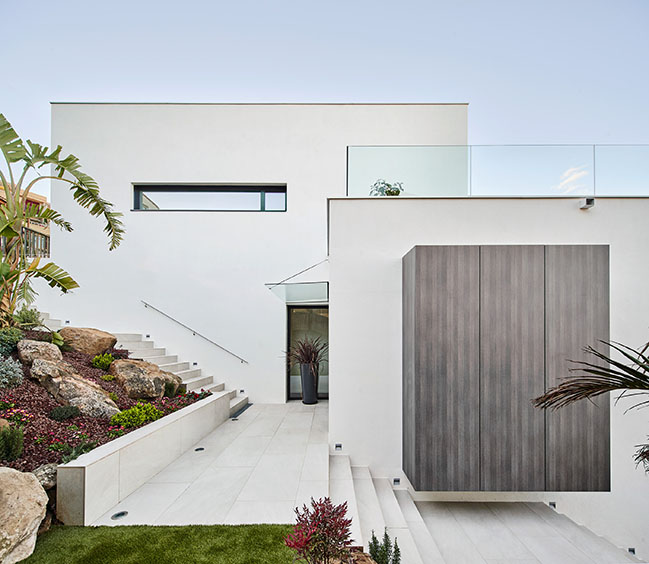 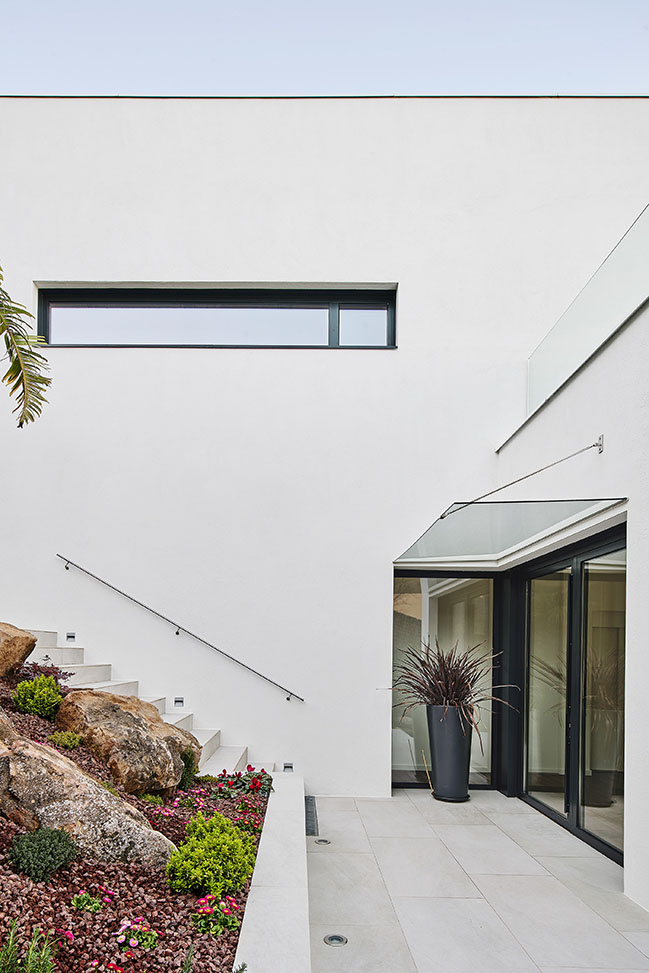 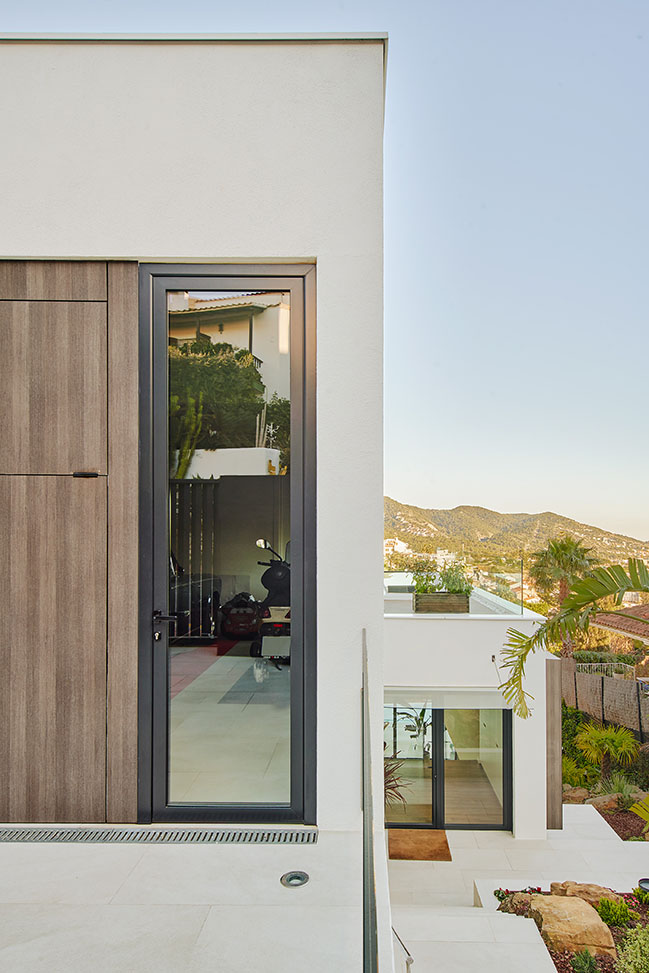 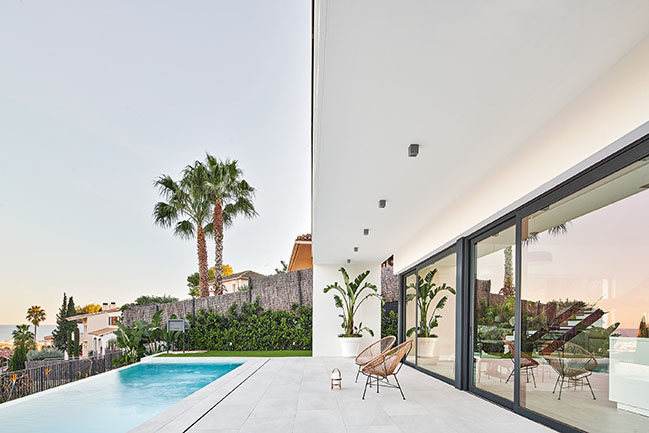 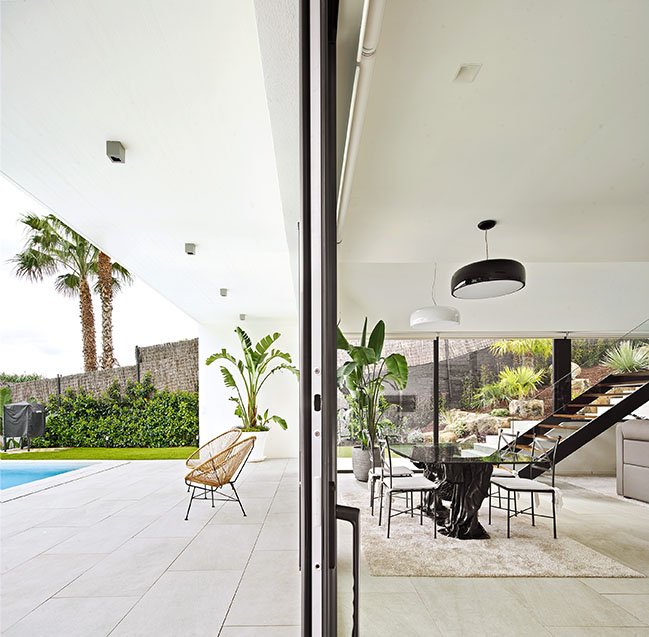 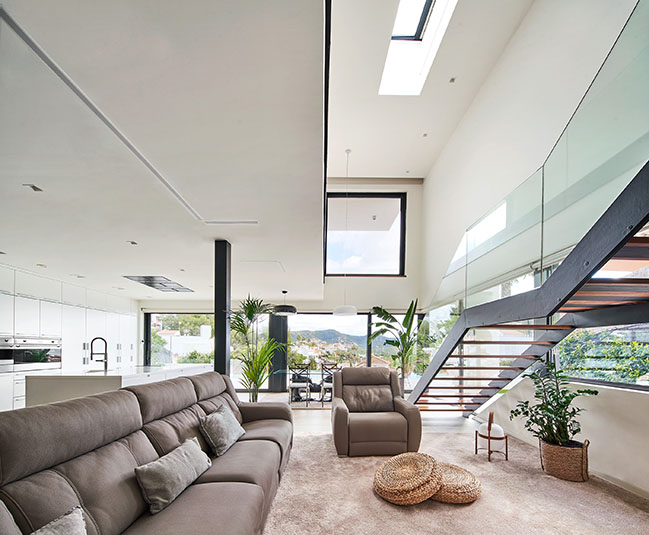 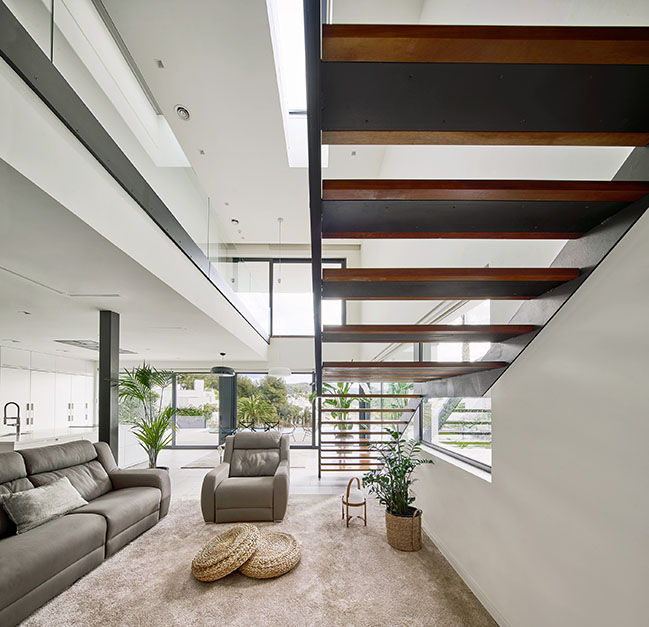 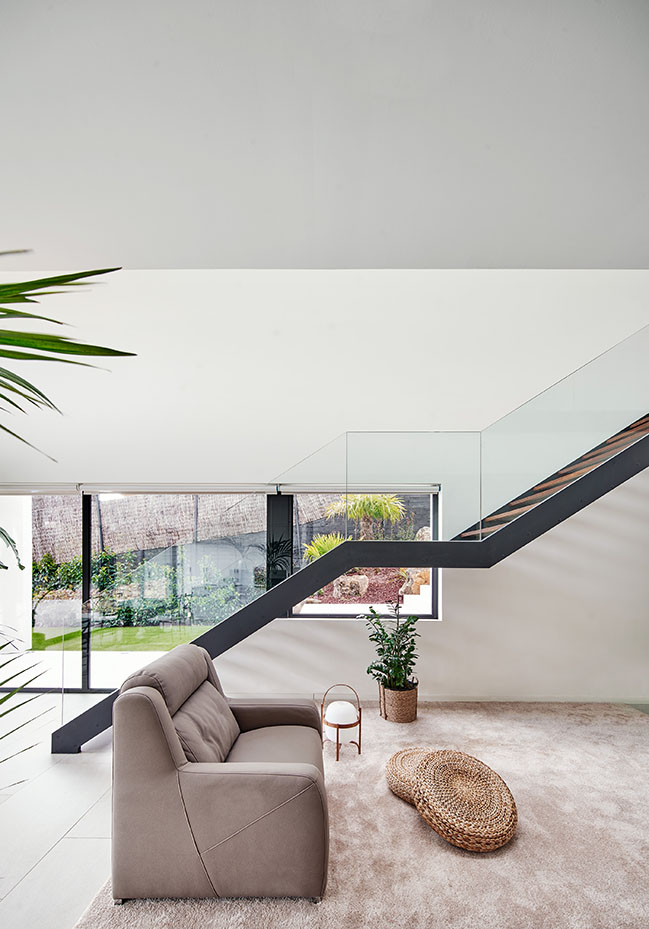 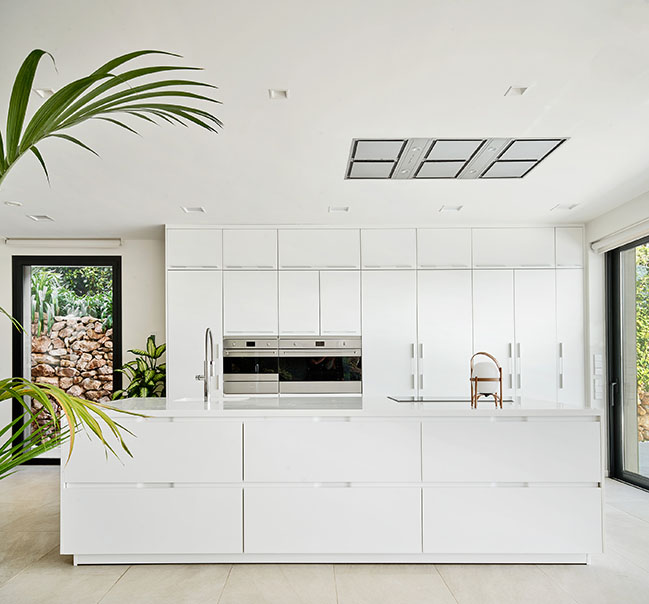 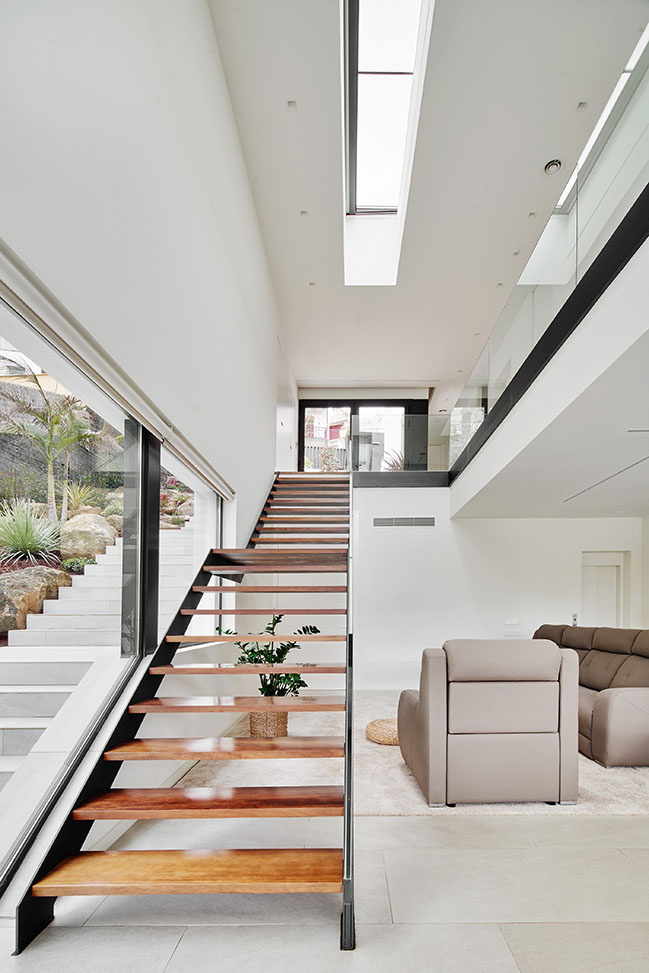 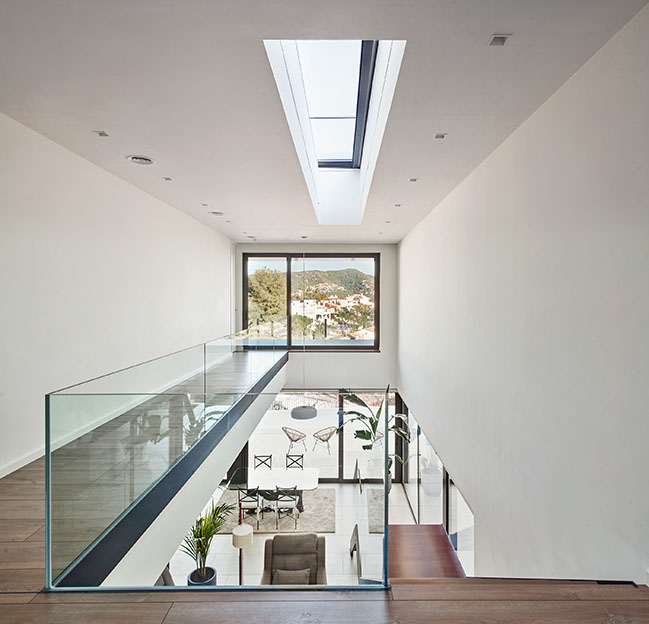 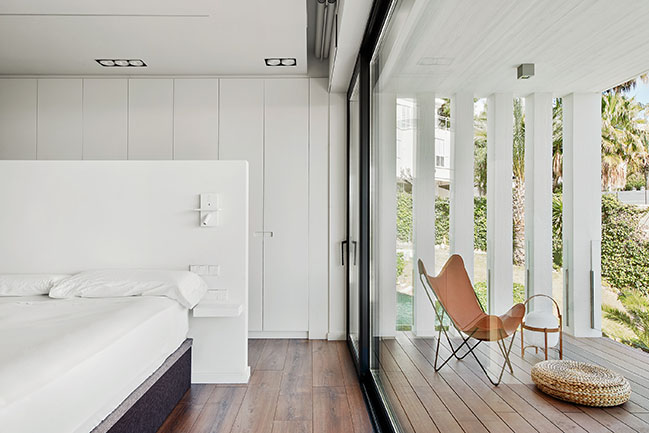 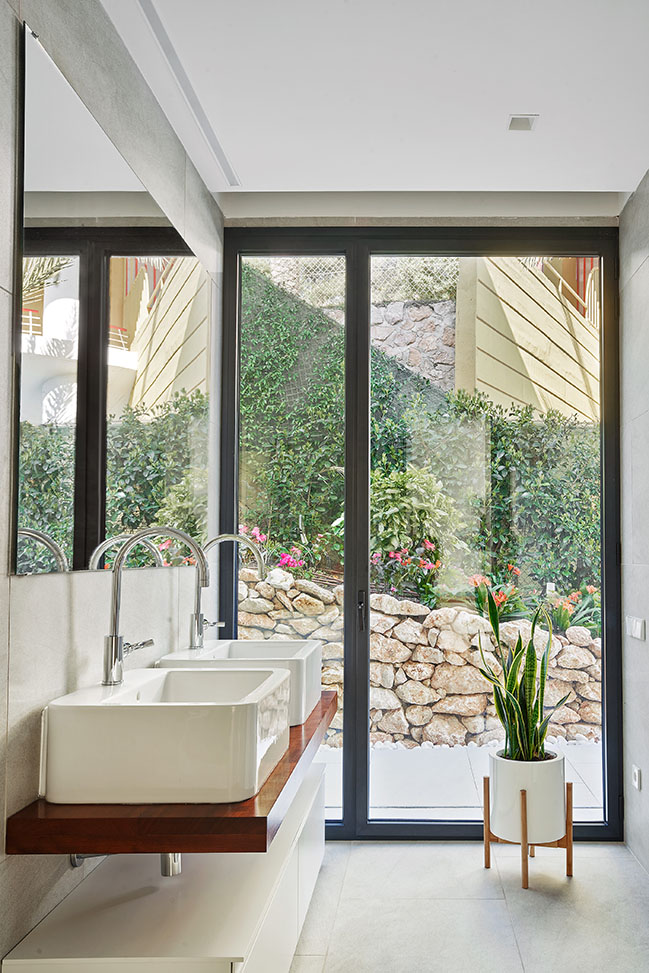 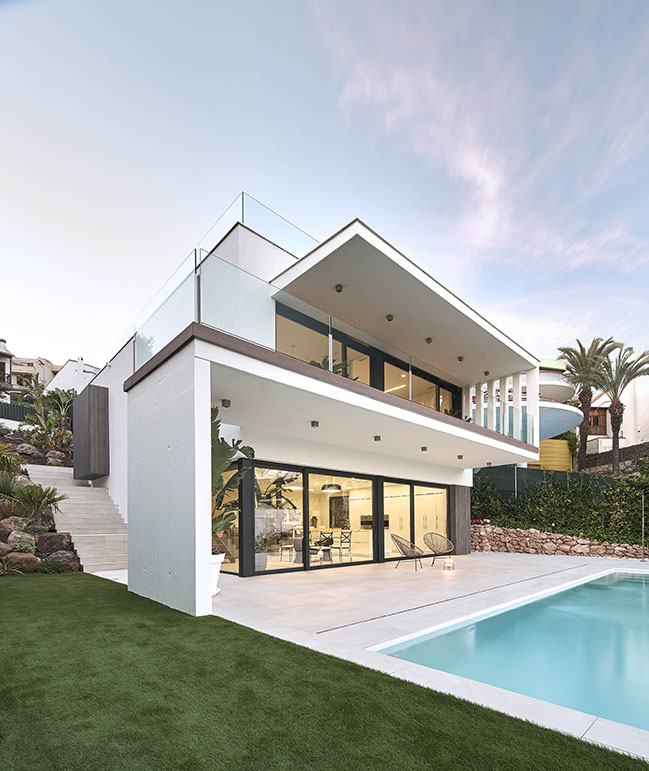 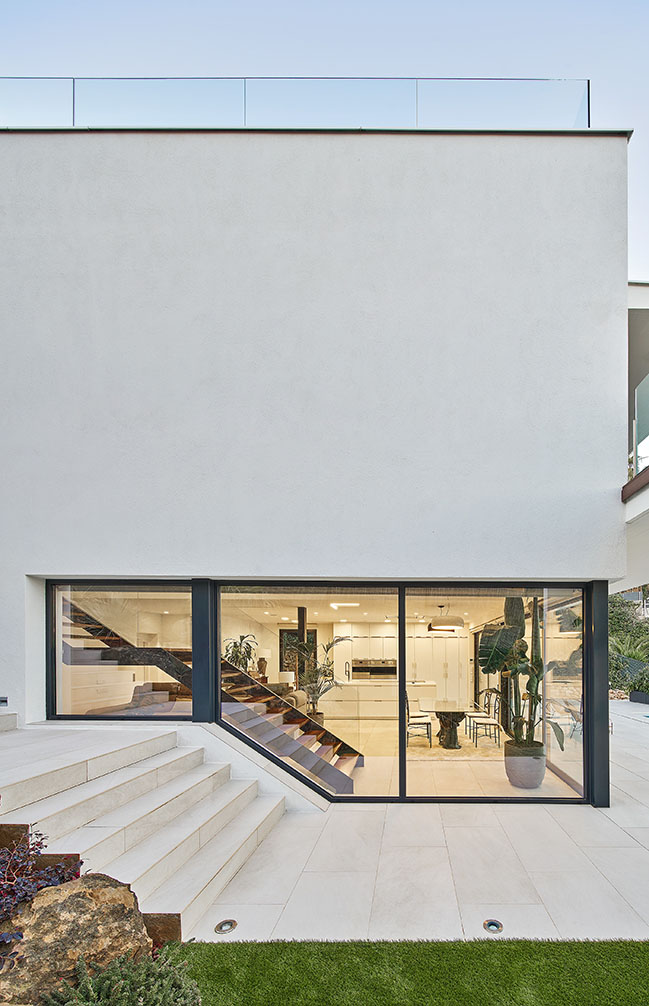 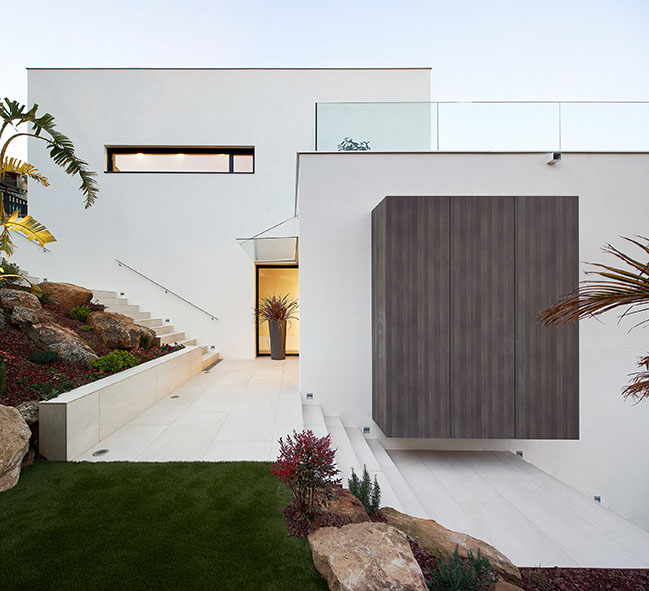 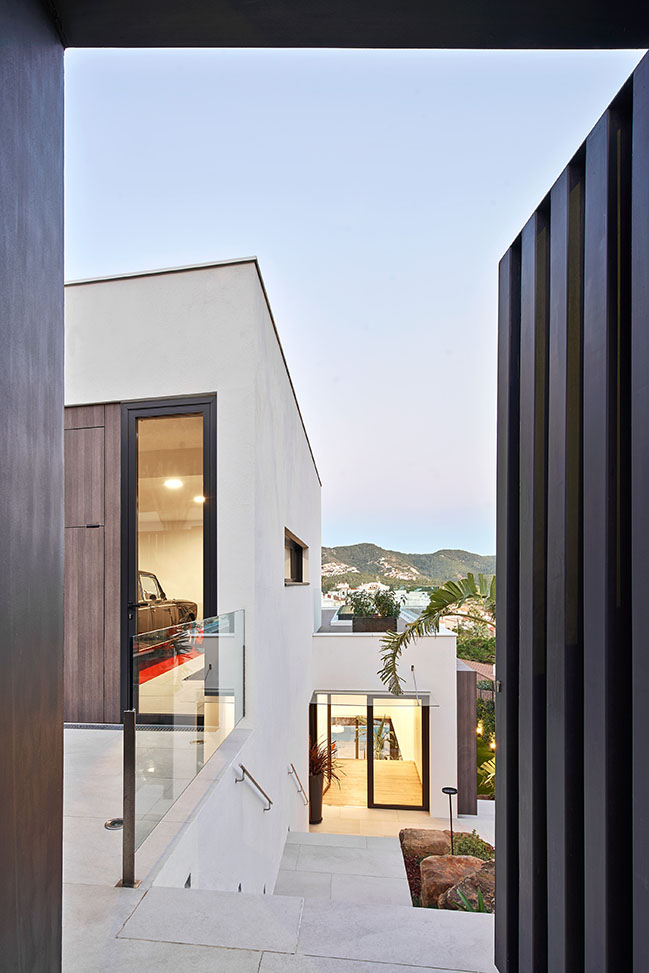 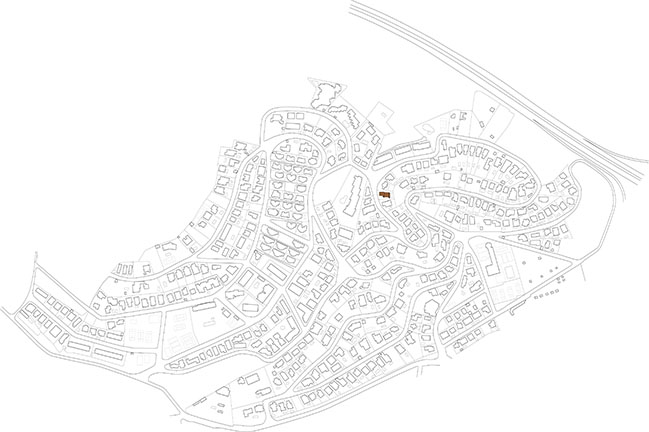 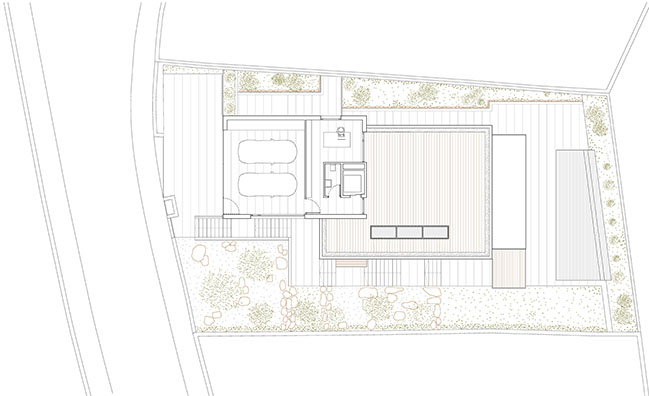 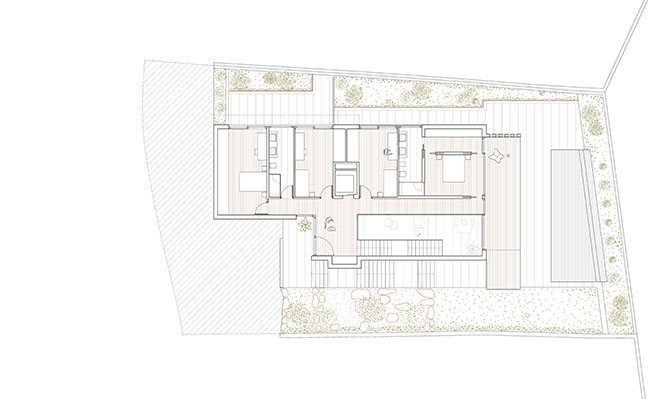 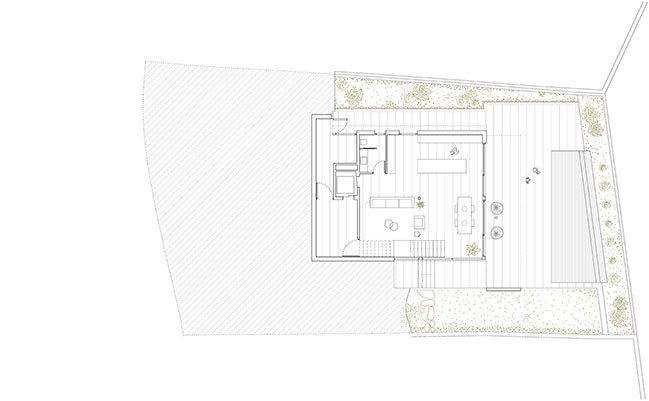 02 / 25 / 2022 The house is located in a slopy terrain which has the virtue to be localised in a fairly high topographic altitude, due to this, with visual orientation to the litoral mountain range... 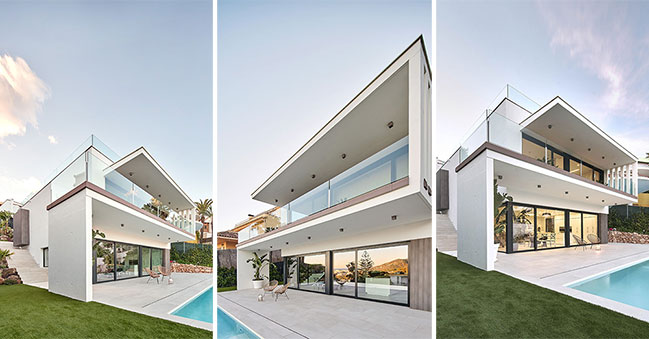