The architecture firm buro5 renovated a 55sqm apartment in Moscow with an interior in Scandinavian style and fashionable shades of pink and blue. 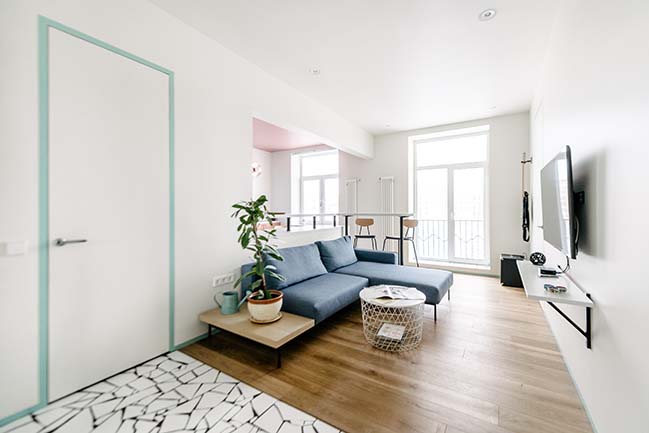 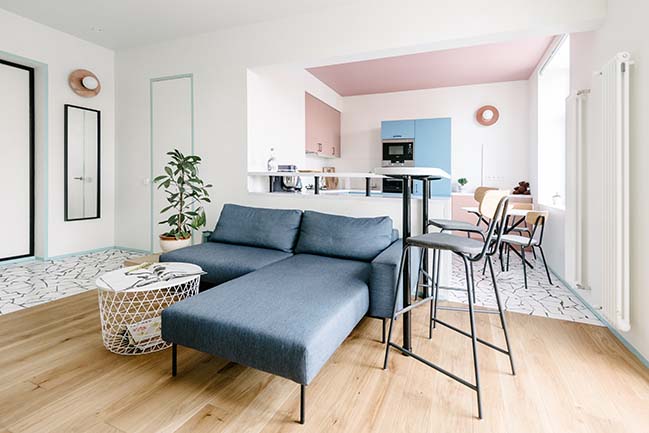 From the architect: The client has lived in Copenhagen for many years, so he feels comfortable in a minimalistic interior and without curtains on the windows. During his life in Copenhagen, the owner of this Moscow apartment was accustomed to a laconic atmosphere and the absence of curtains on the windows, so he to make an interior in Scandinavian style. The only thing he need more was painst. So in the interior there were now fashionable shades of pink and blue, as well as furniture and accessories of Scandinavian brands. 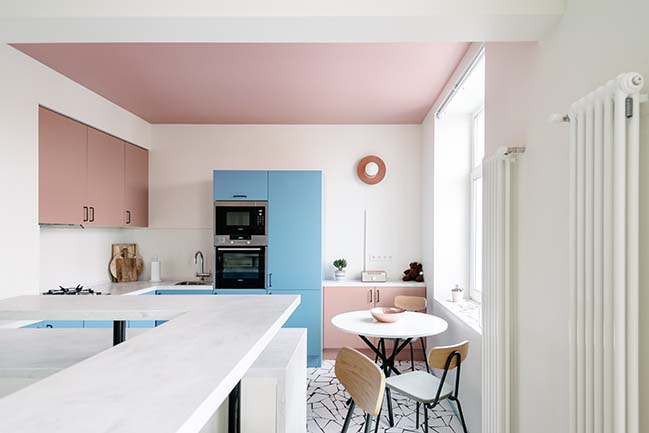 "The lack of curtains on the windows did not bother anyone - to the house opposite there are three hundred meters,". Area of ​​55 m² is located in a Stalinist house built in 1957. The architect did not have the opportunity for a radical redevelopment: the load-bearing wall and the beam pass through the apartment, so he combined only the kitchen and living room, and left the bedroom isolated. 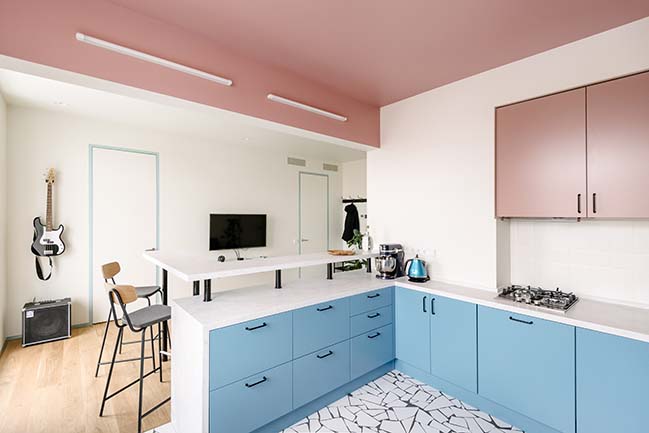 Bearing beam, passing between the kitchen and the living room, successfully zoned space. The owner likes the simplicity of Scandinavian interiors, but at the same time he lacked color, so the facades of kitchen cabinets became blue and pink. The architect also dared to paint in the pink ceiling, and in order not to disturb his smooth and level surface, he treated the kitchen only with two light sources - sconces and fluorescent lights fixed on the beam. The battery made it difficult to put a table and chairs by the window, so we transferred the radiators to the wall. 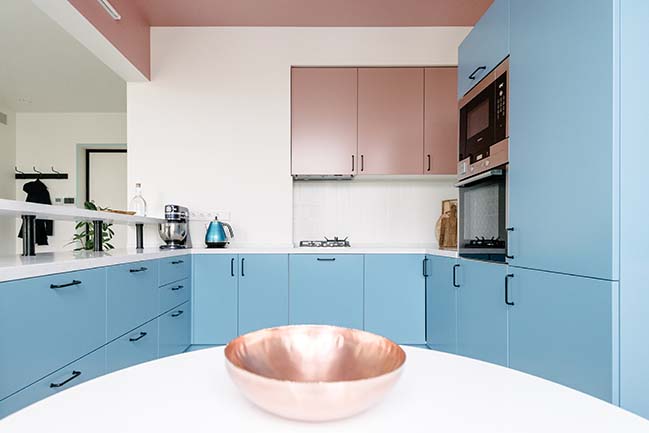 Living room - Filling the living room is extremely simple: a sofa, a TV and a shelf under it. There is also a bar counter, which is a continuation of the kitchen. We deliberately refused chandeliers in all rooms in favor of built-in lamps and sconces. Chandeliers did not fit into the minimalist interior concept and pulled attention to themselves, while the emphasis was on the objects and finishing the bottom of the apartment. Also, in order not to spoil the picture, we hide the air conditioners. 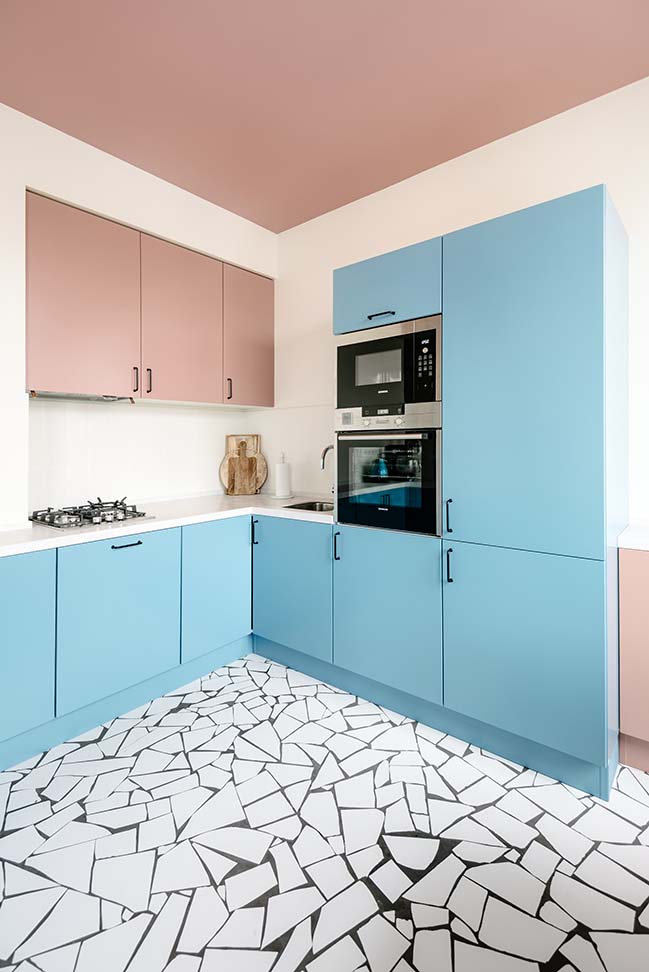 Bedroom - In this room there is a new shade of paint - mustard. The edge of this color runs along the perimeter of the entire room. "Culprit" was a desk, located at the window, with a table top made of larch of a similar shade. In the bedroom there are neither nightstands nor cabinets, only the entrance to the dressing room, where all things are stored. 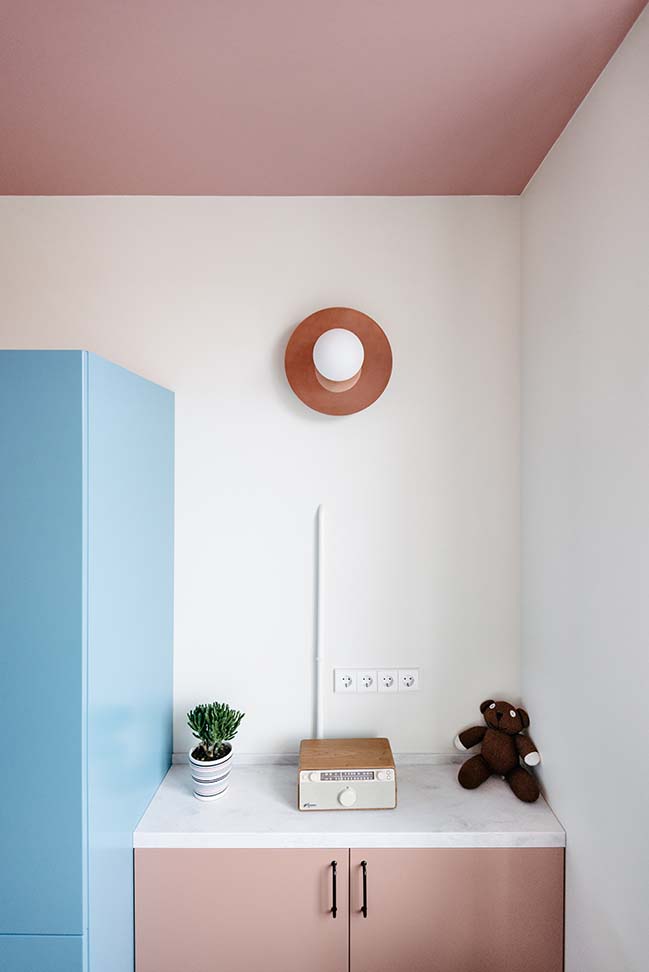 Storage System - The apartment has a very spacious kitchen, and also two wardrobes at the request of the customer. One can be accessed from the hallway, it stores the outer clothing and all household items. The second is adjacent to the bedroom. "Cloakrooms are a convenient and budgetary alternative to cabinets," says the architect. "They are just as functional, but they do not have facades, and the filling is hidden from the eyes, so it can be anything." Above the cloakrooms is a unit with air conditioning. 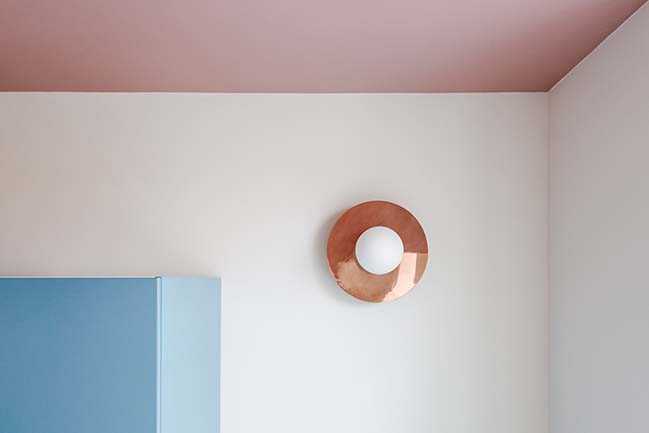 Bathroom - This part was cut off in favor of the kitchen, but it did not stop to place everything necessary here. To the right of the entrance, in the closet, are hidden a washing and drying machine, a boiler and an ironing board. Another capacious cabinet is under the sink. The broken porcelain tiles, which are finished with the floor and walls of the bathroom (as well as the floor in the hallway and in the kitchen), is an element of the Mediterranean style, which the architect decided to dilute the Scandinavian brevity. 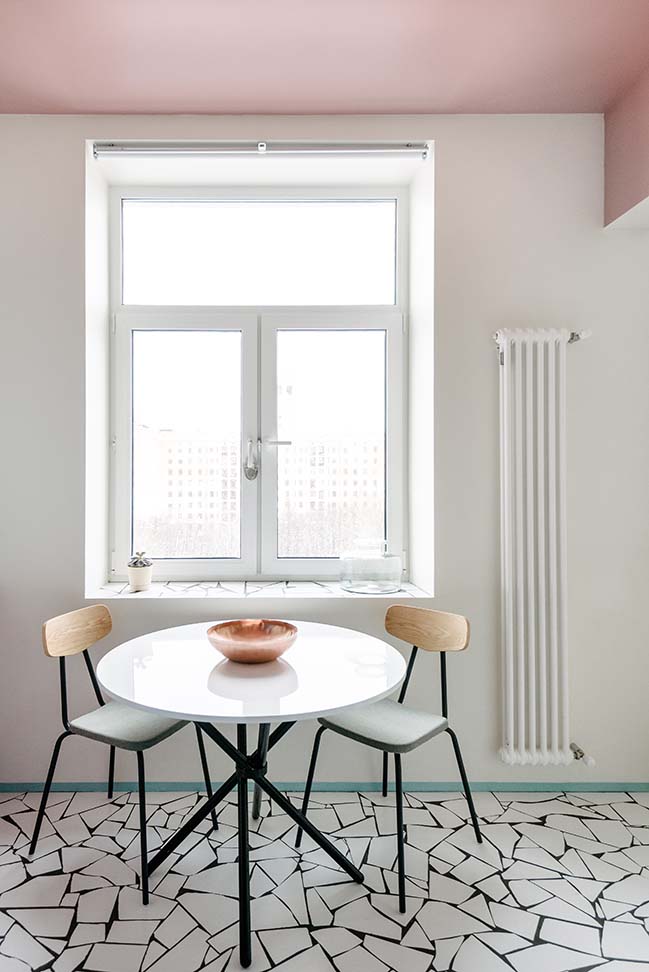 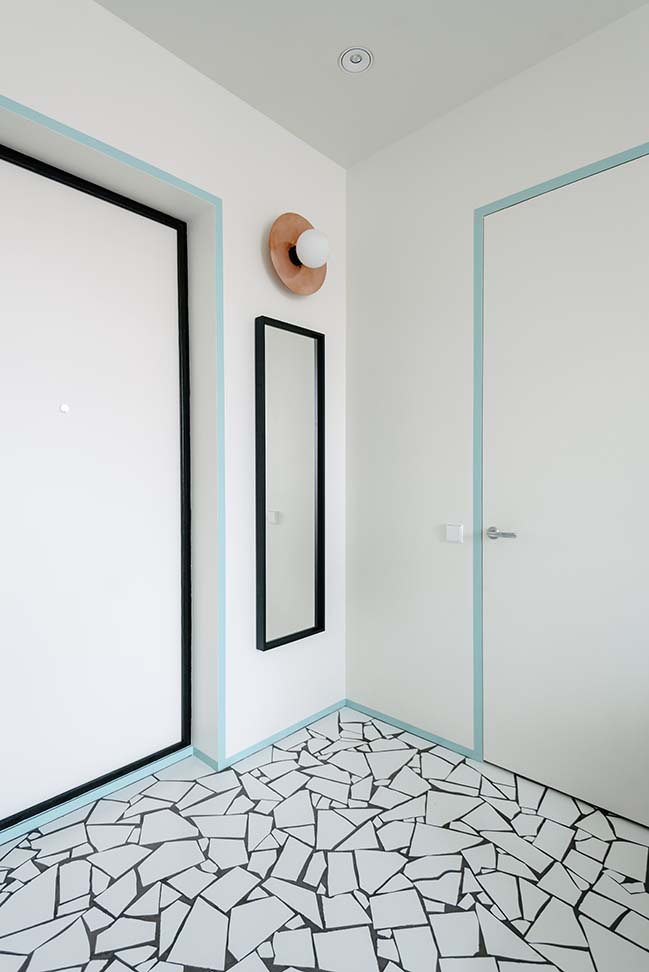 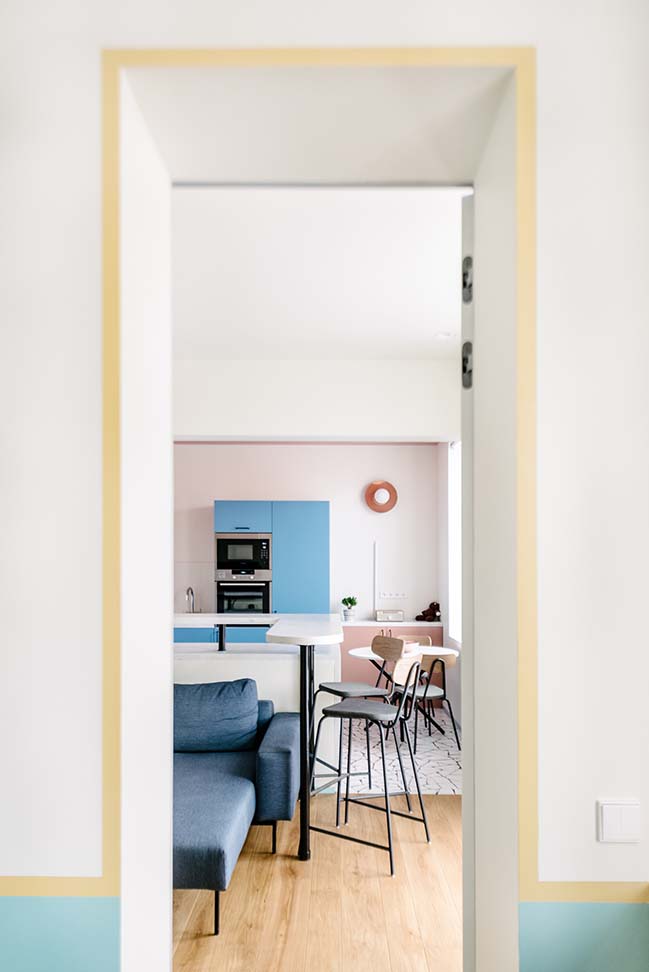 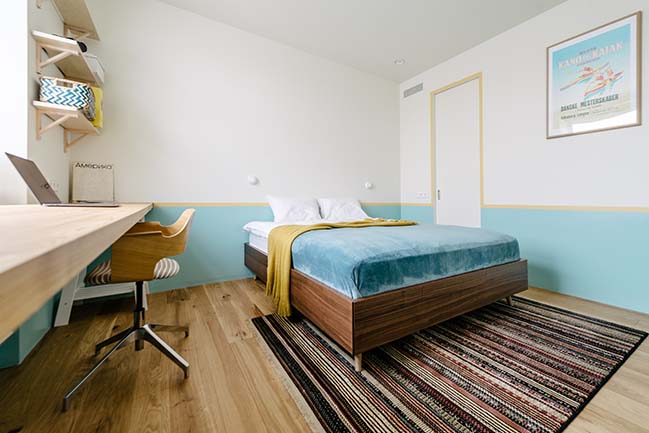 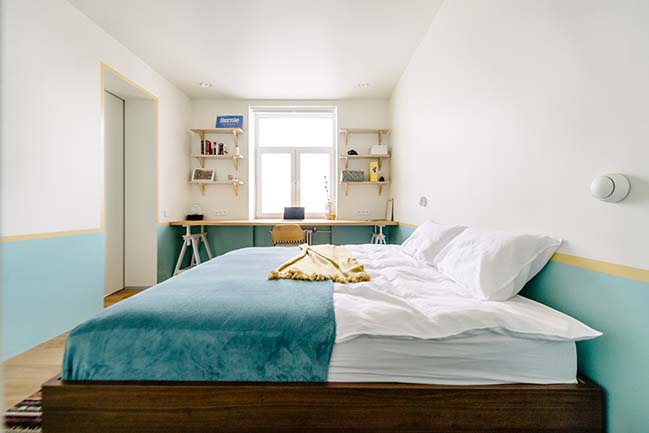 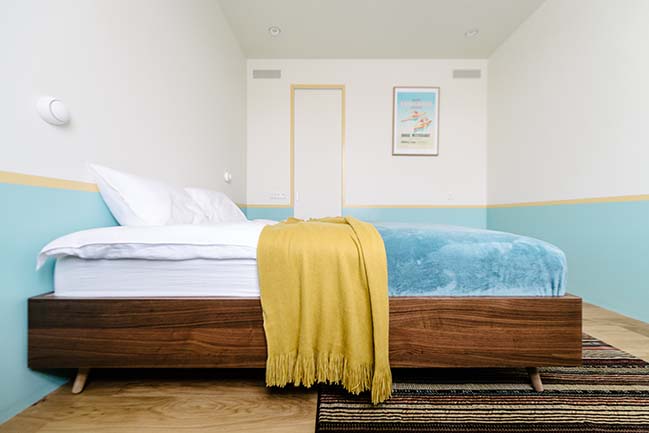 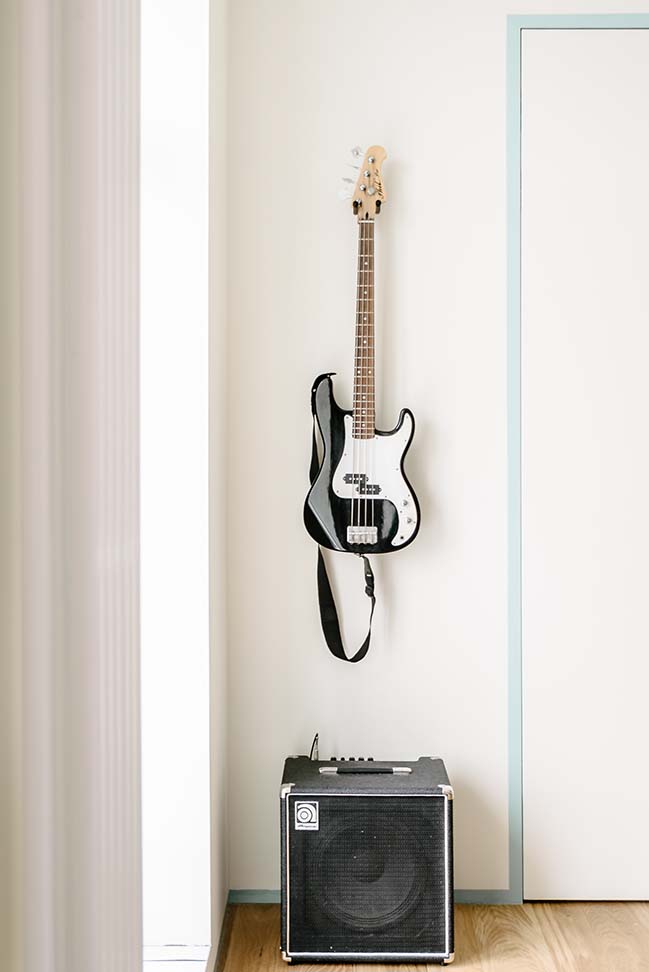 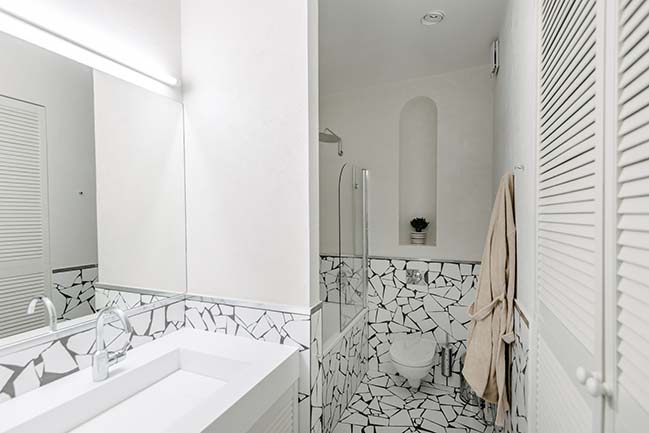 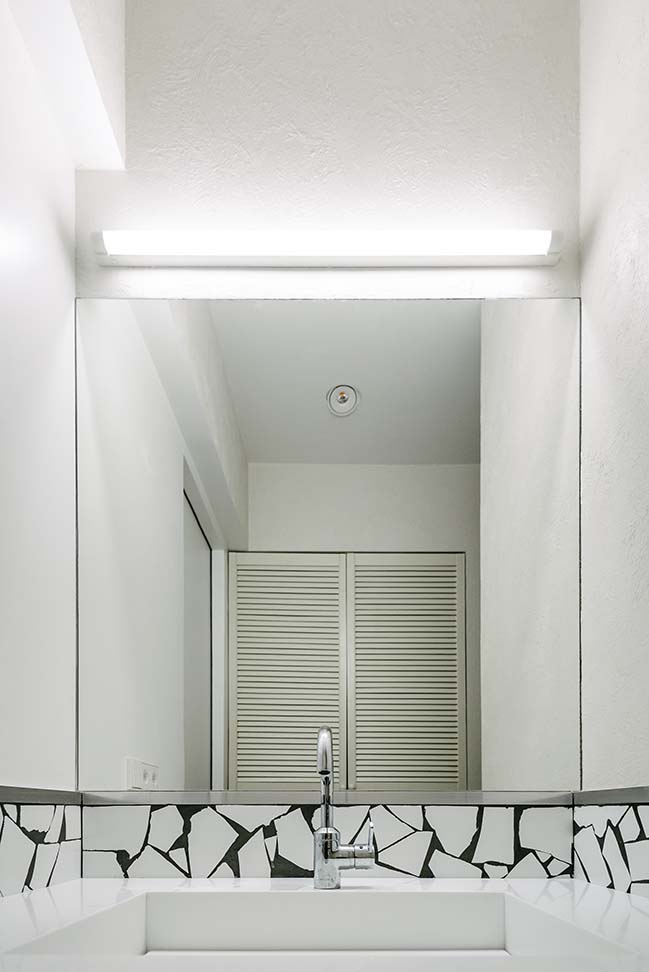 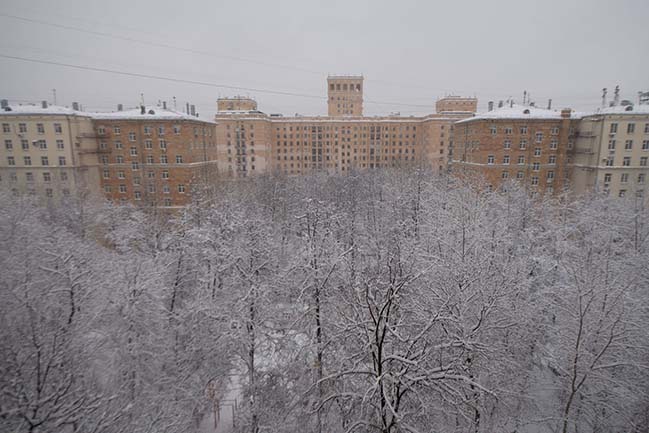 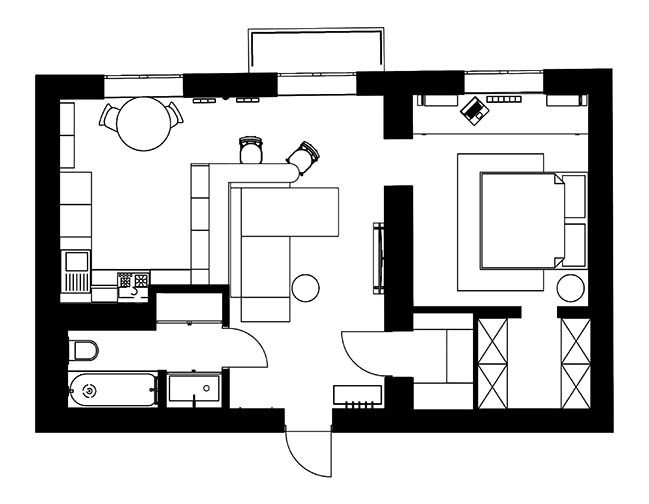 You may also view:
> White minimalist apartment in Moscow by FLOW project
> Scandinavian and Mediterranean home by Egue y Seta