"La Maison Gauthier" (the Gauthier House) is located in the Laurentians, in Quebec, near the town of Mont-Tremblant. It is set in a hilly terrain and is surrounded by a dense expanse of forest characteristic of this mountainous region. 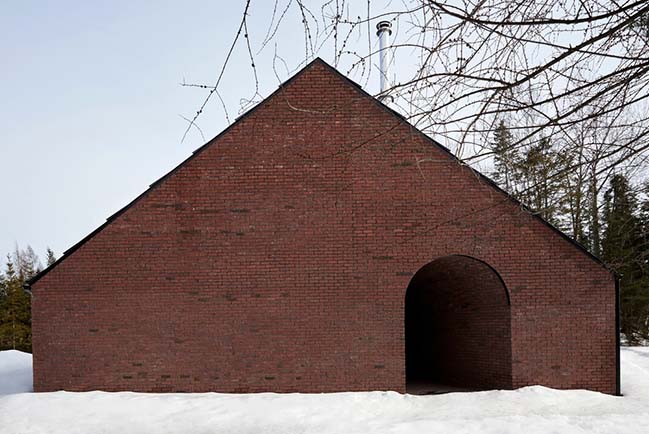 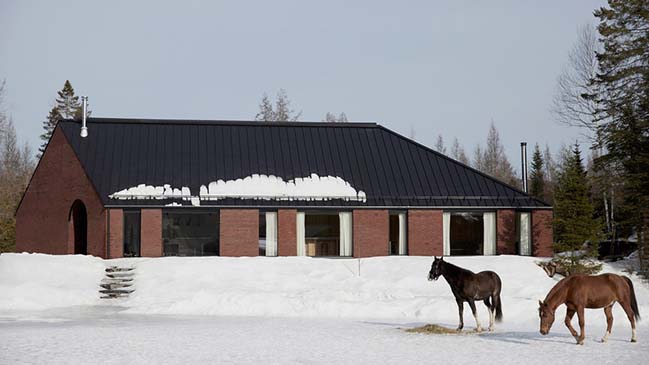 From the architect: The lot is located on a rocky hill covered with spruce and birch. It is bounded to the east by the main road and to the west by the owners’ horse farm. The clients wanted a volume with views largely oriented towards the horses’ riding arena below. At the same time, they wanted to take advantage of the intimacy created by the topography of the lot. 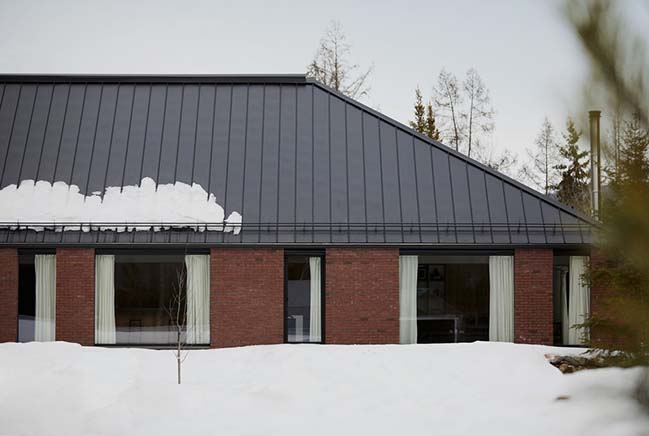 The forested berm between the road and house creates a visual filter, allowing a sequential progression towards the building. The volume is not visible from the main road below, but gradually emerges, culminating in the imposing facade of opaque brick with a single off-centred arch. This is the main entrance to the house. 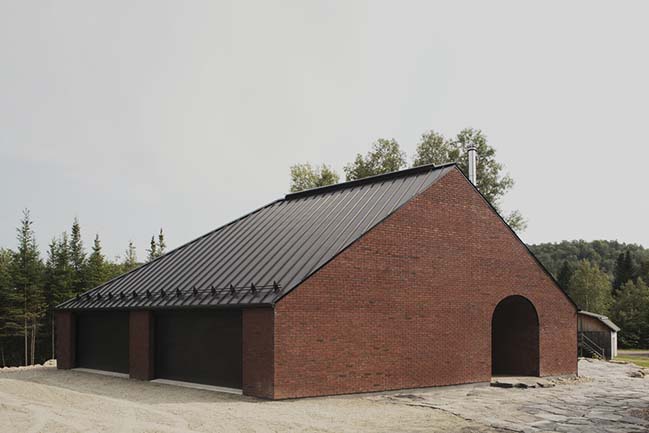 Orgazination and perceptual narrative - The client’s marked interest in American minimalist painters, along with the presence of her ceramics studio, influenced the composition of the floor plan and the interconnection of simple geometric shapes in the design of the interior volumes. 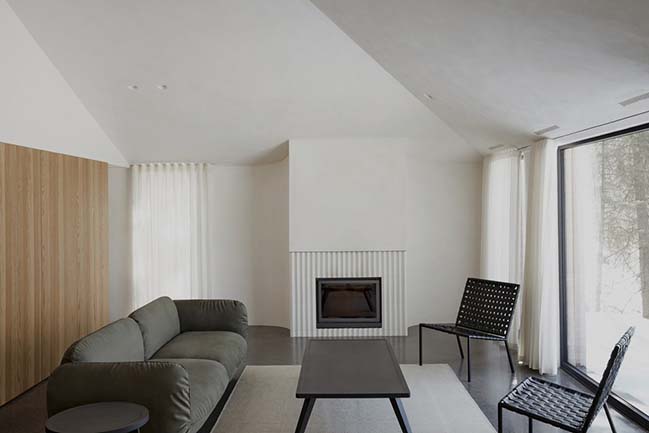 European stables and horse-breeding centres were among the references explored during the initial design phase. The house is designed in an asymmetrical V plan to connect two distinct areas: a wing for the garage and the client’s ceramics studio, and a wing for the common living areas. 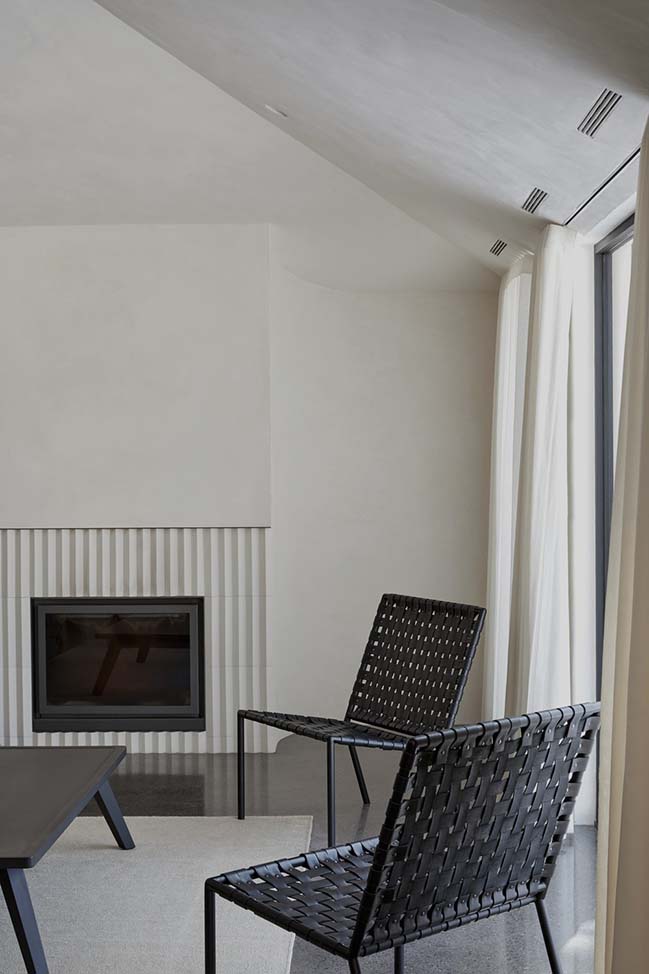 The various spaces are interconnected in such a way as to create a perceptual narrative for users and visitors, who experience alternating sensations of compression and expansion. The sensorial presence of simple raw materials (brick, lime, oiled oak) helps to create a tranquil atmosphere. 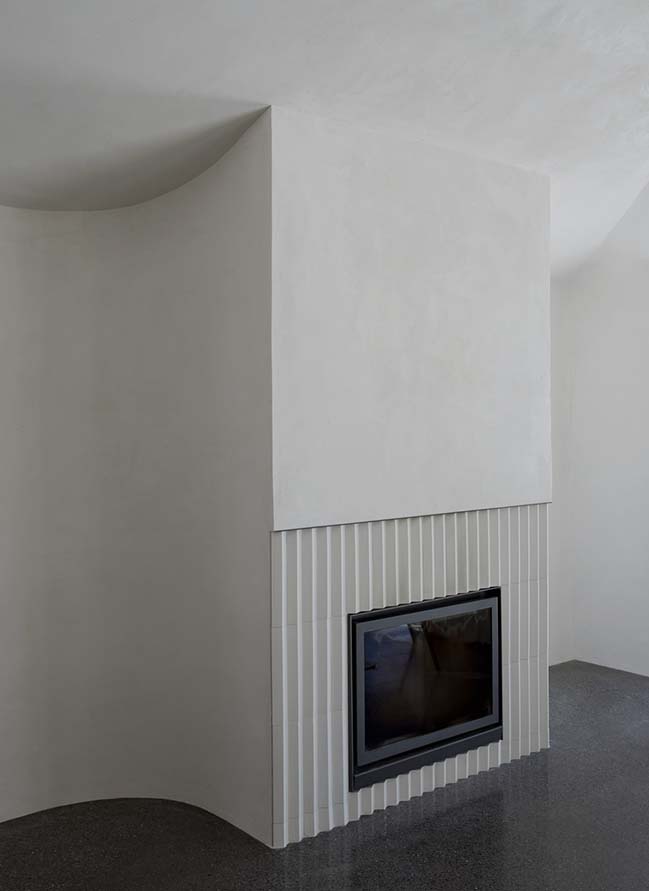 From the entrance arch, the sequence marks a division between the service areas, the artist’s studio, and the more intimate family space. The curved corridor forms a threshold between the two wings. Its lowered ceiling produces a sensation of darkening and narrowing, which starkly contrasts with the expansive volume and light of the main room at the end (interesting chiaroscuro effect). 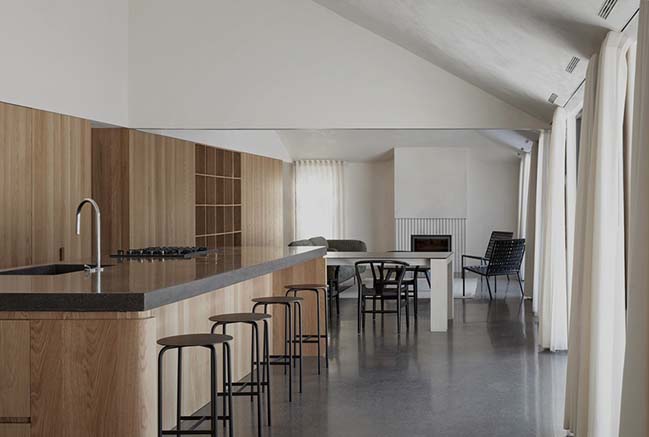 Here, high, inclined ceilings are divided by two vertical veils that partition the kitchen, dining room and living room without compartmentalizing the volume. The gazebo marks a fluid extension from the interior towards the exterior. 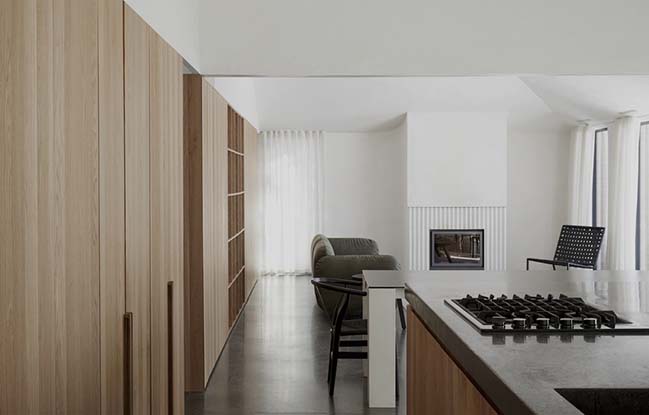 Proportions and materiality of the void - Wide, yet relatively low openings carefully frame the views towards the horses’ arena. The varying proportions create an interesting tension between the interior volume and the landscape. 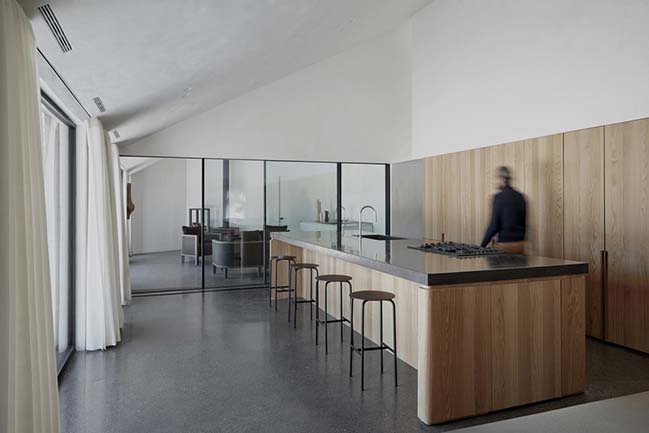 Vast skylights oriented towards the east direct light towards the lime-covered vertical veils and also permit natural ventilation of the main volume. These hollow volumes create a bright, luminous atmosphere, lending a sacred quality to the space. A third “light cannon” in the ceramics studio directs zenithal light into the room. 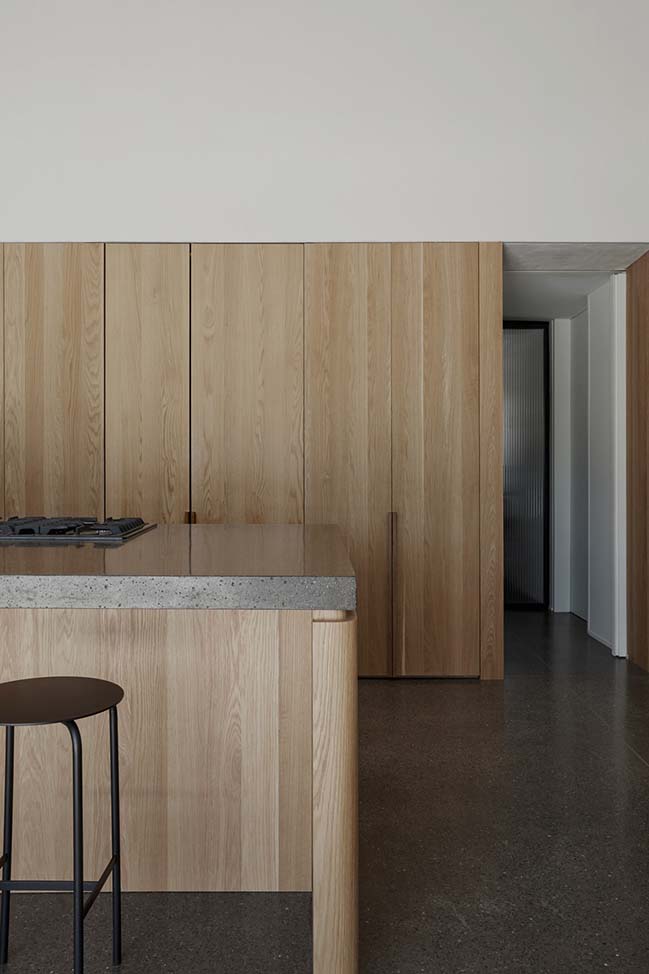 The inclined surfaces of the faceted ceiling, combined with the vertical veils and light cannons, lend the void sculptural qualities usually associated with solid space. The materiality of the void gives body to the volume. Separated from the living area by a thick dividing wall, the bedrooms and the bathroom are organized within the fold of the V-shaped volume of the house, creating an intimate, introspective ambiance. 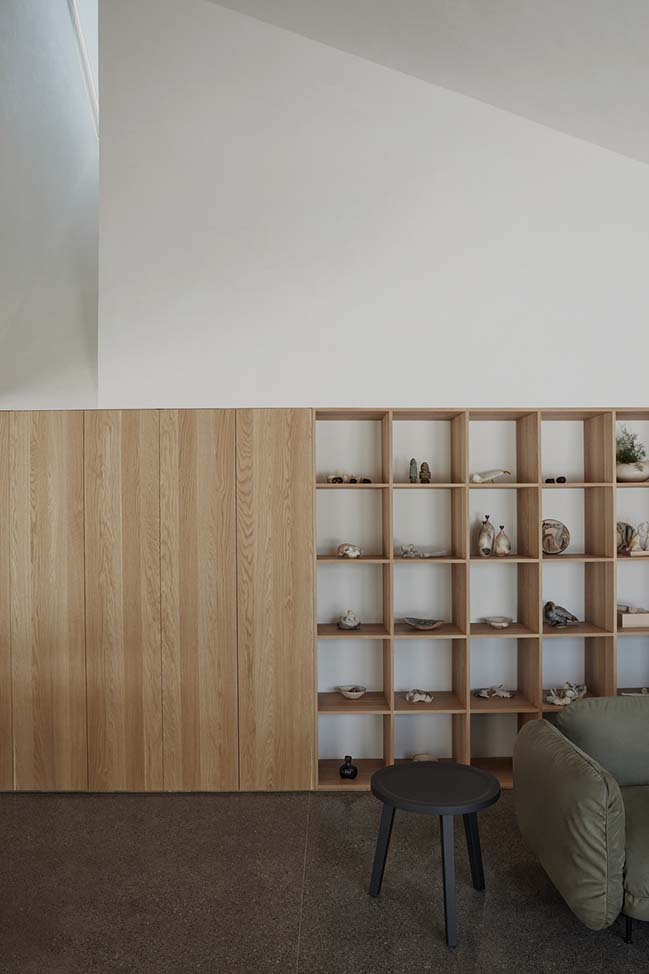 The variety of interior spaces contrasts with the apparent simplicity of the exterior volume. The massive roof rests on a seven-foot brick base. The geometries converse with the impressive body of the existing farm, at the same time making their mark in the natural surroundings. 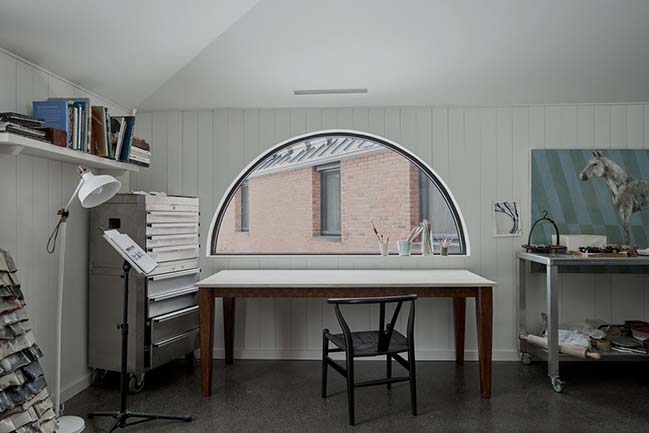 The asymmetrical volume, enveloping form, chiaroscuro effect of the curved corridor, shadows, margins, thresholds, voids, and raw materials allow the unique atmosphere of the place to emerge without concealing the structural logic of the house. 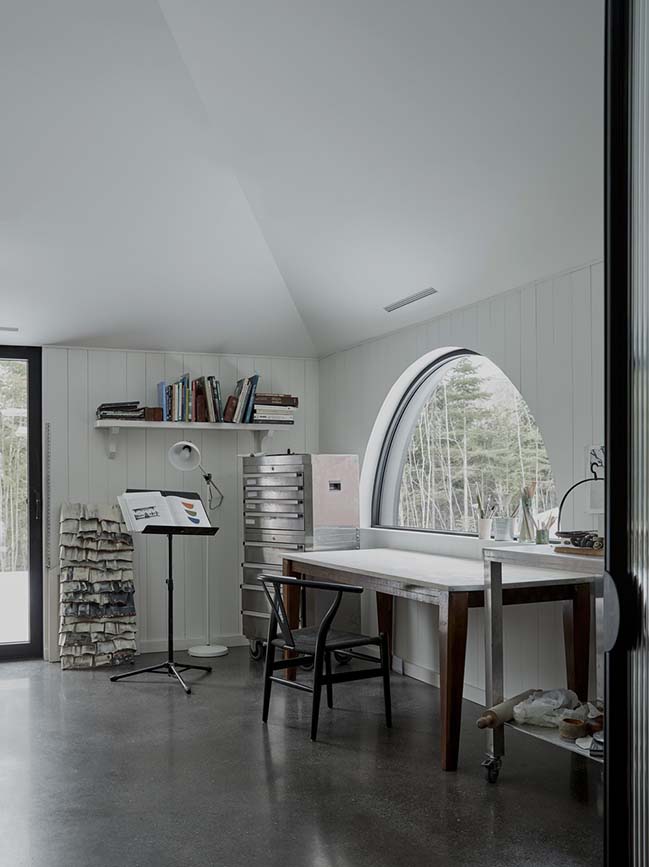 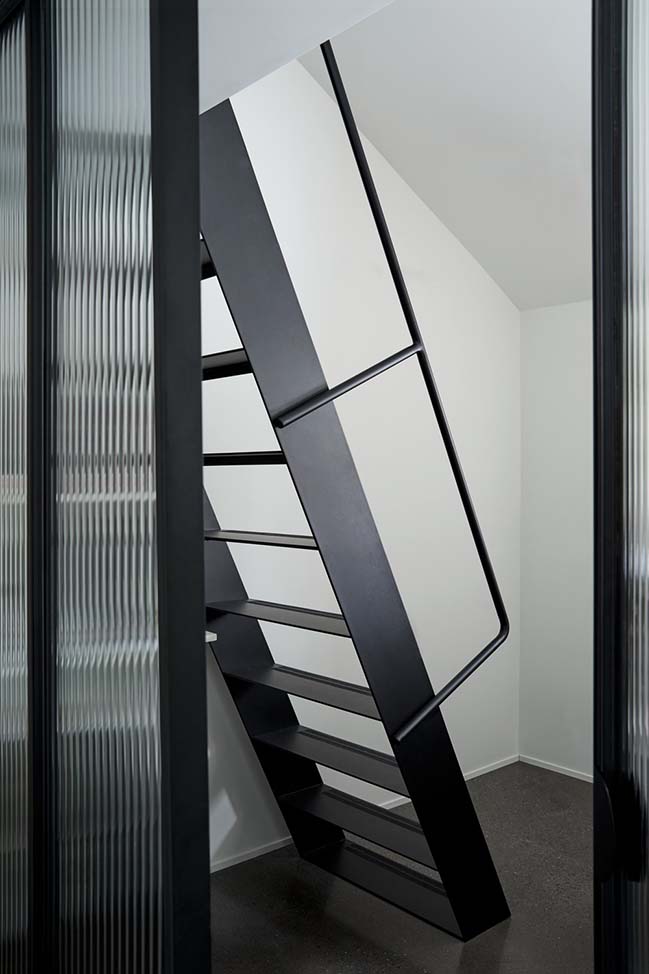 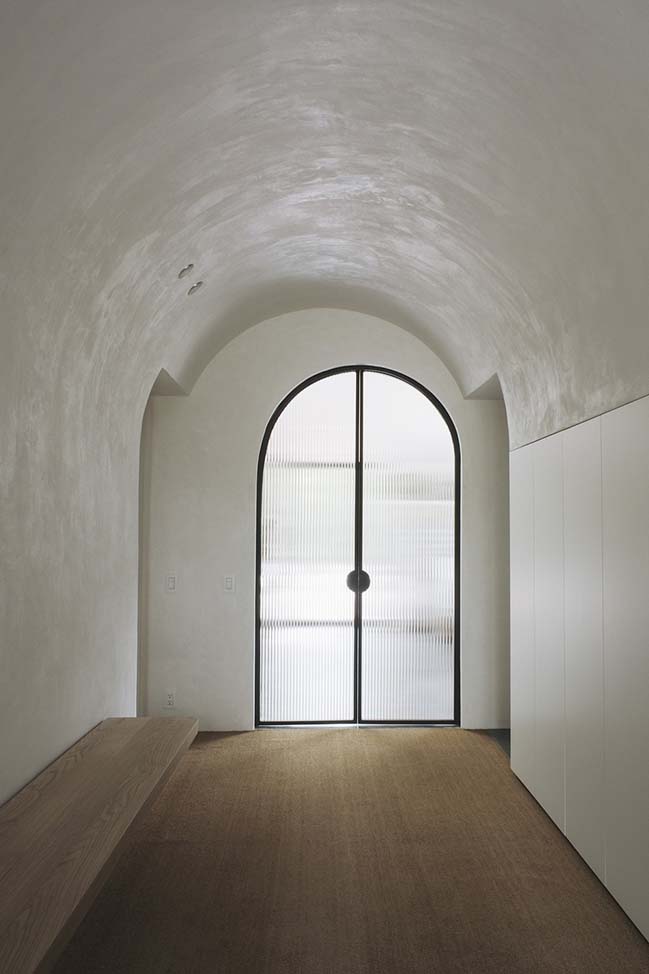 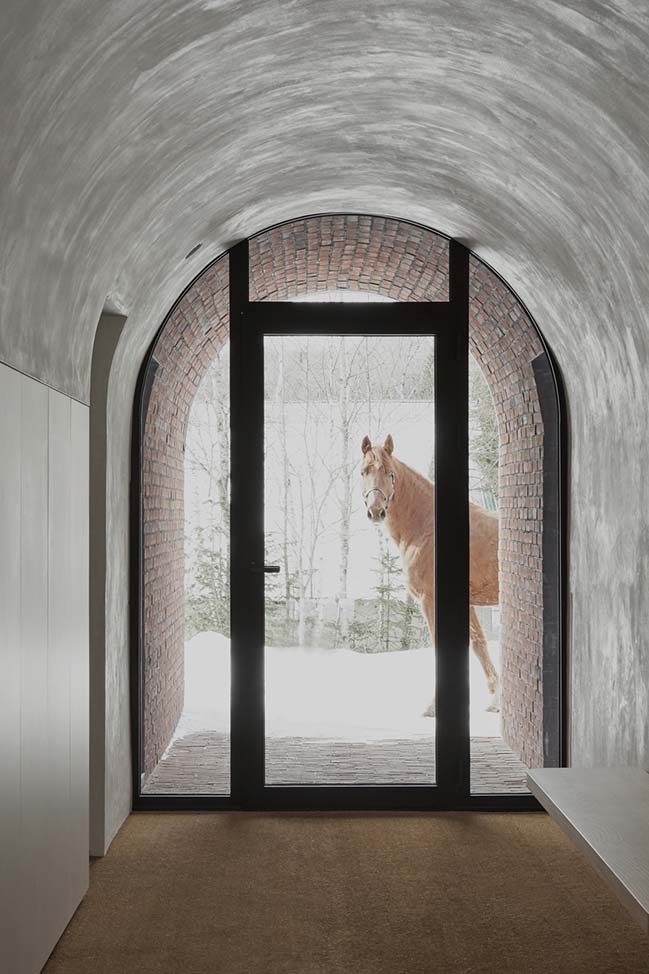 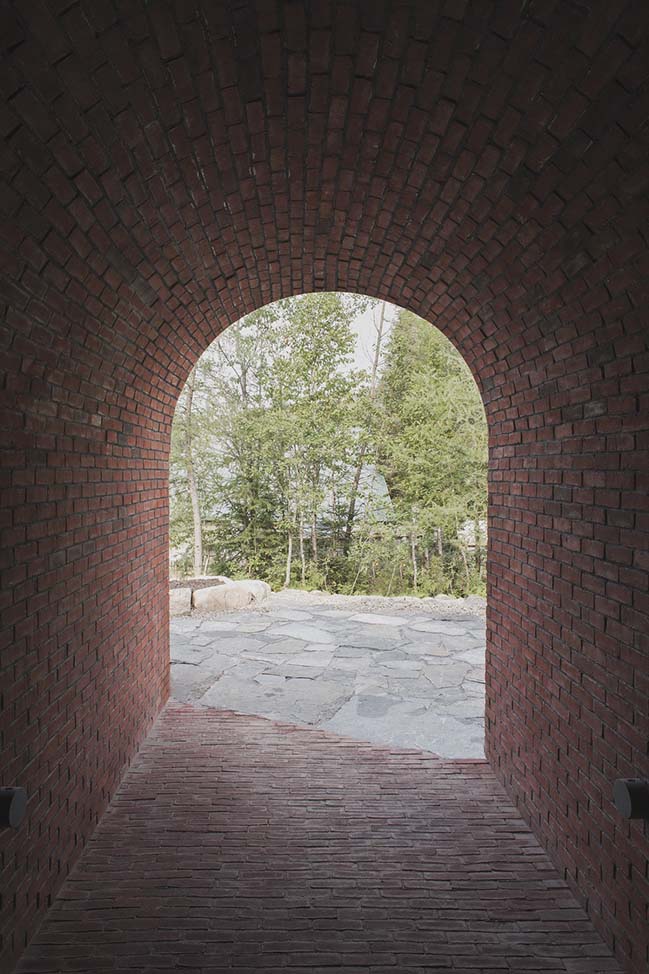 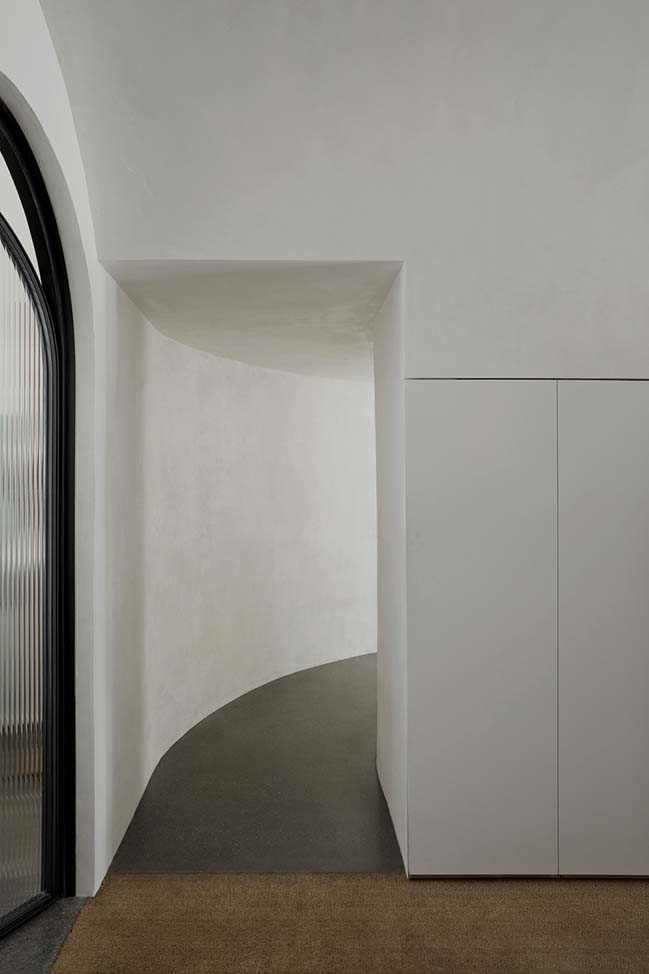 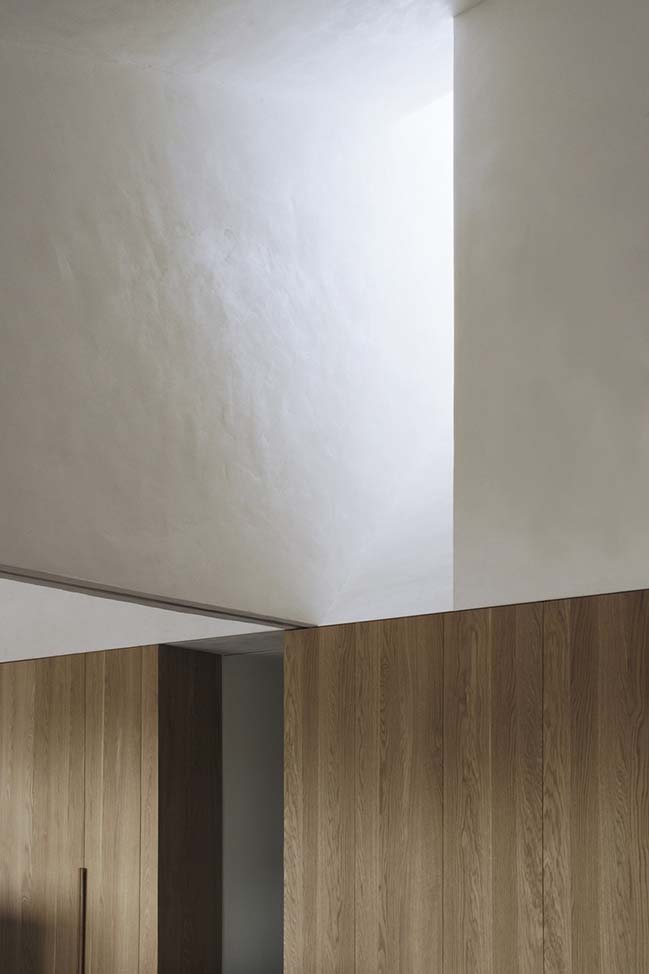 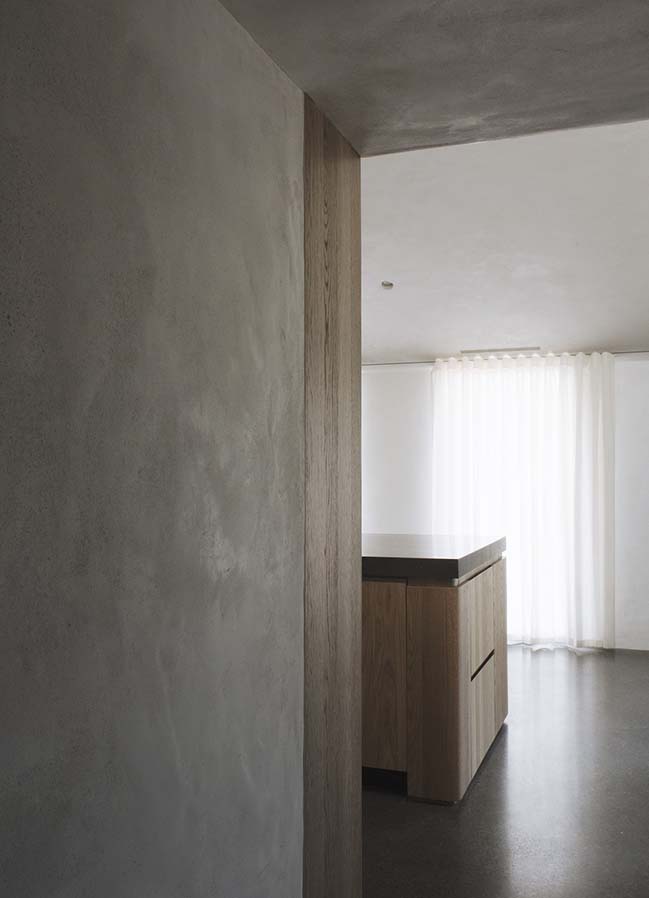 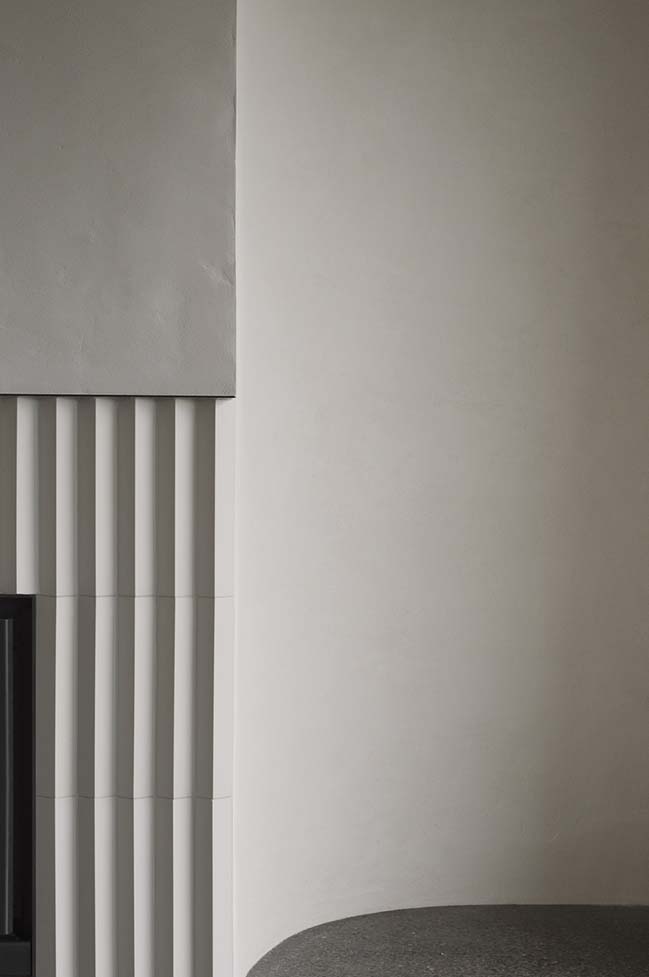 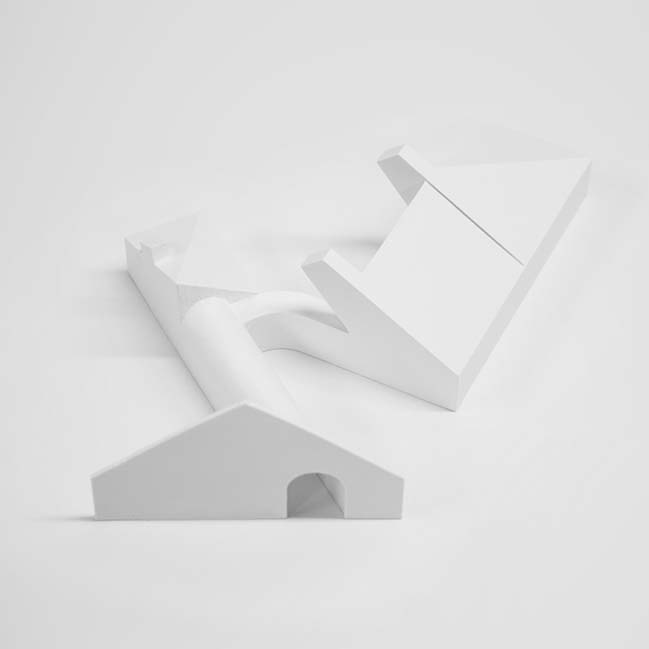 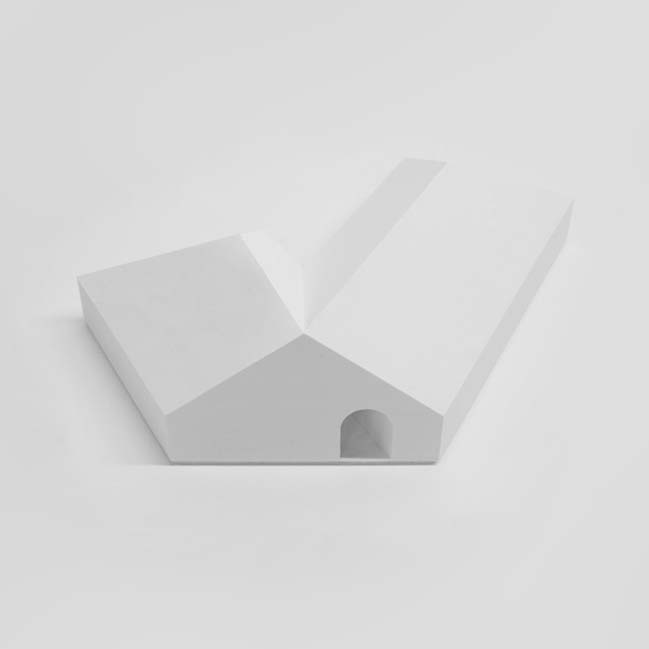 05 / 22 / 2018 the Gauthier House is located in the Laurentians, in Quebec, near the town of Mont-Tremblant. It is set in a hilly terrain and is surrounded by a dense expanse of forest