Designed by Lantavos Projects. The apartment occupies the overall available space on 5th floor. The building, built in the mid-60s’, is located in a walking distance to both Kolonaki and Syntagma squares in the center of Athens. The building can be described as a typical example of the mass "production" of the period, which develops in six floors with the facades of 5th and 6th-floor recede staggered in respect to the rest floors, according to local building legislation. This condition generates large balconies for these two floors. 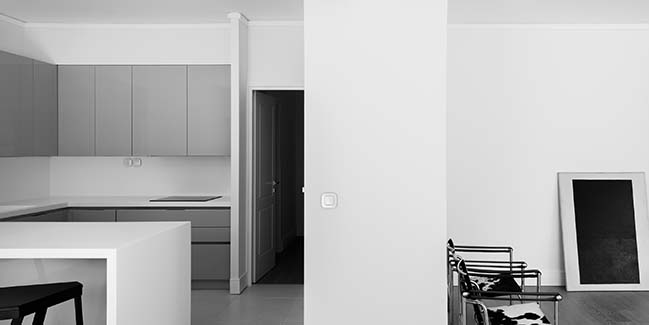 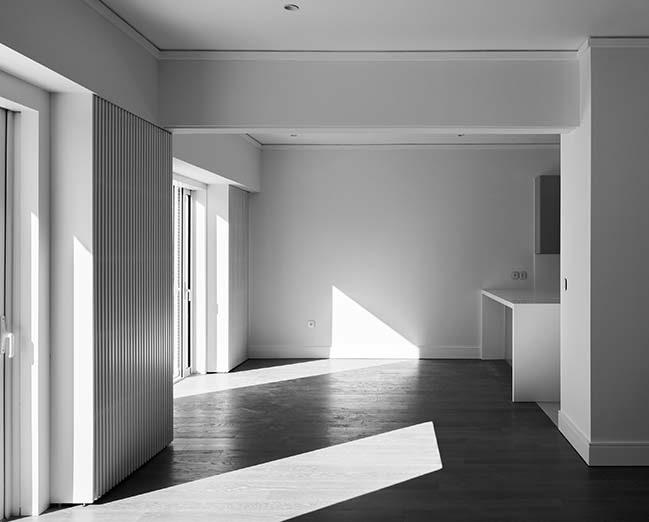 From the architect: The central stairwell of the building is almost symmetrically positioned within the plan, as a core, and creates equal size spaces on the longitudinal axis of the plan, which additionally creates a "forced" movement around it, within the apartment. The re-design of the plan layout was based in creating three zones, the day-to-day areas, located on the street side, originally divided into three smaller spaces, the auxiliary areas in the middle, and the bedrooms on the rear. To make this possible, there has been a targeted shift of internal walls to new positions and the deployment of additional partitions. 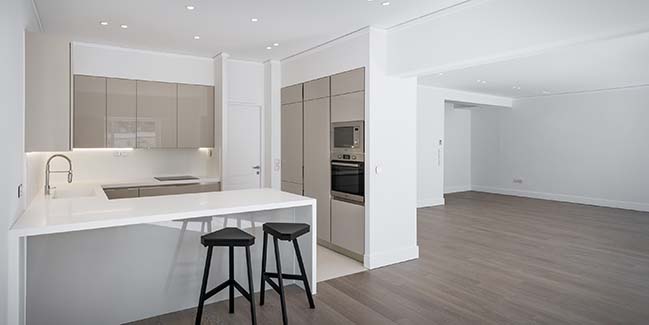 The apartment was unpinned and reconstructed, including the electrical and plumbing installation as well as the heating system. The old windows were replaced with double glazed aluminum profiles, while rock wool thermal insulation was added in parts of the perimeter walls, upgrading the energy performance. 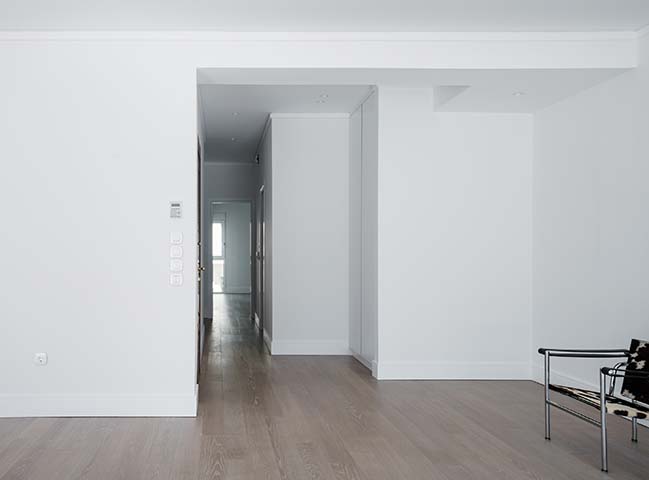 Despite the clear definition of spaces and facilities in the plan, that wasn't the case with the use of materials which create a visual unity. The floor surface layered with wooden boarding with a 10mm thickness that is only interrupted in the kitchen. The white color is dominant on walls and ceilings as well the majority of fixed cabinetry with the kitchen becoming once again the chromatic focus point. The two bathrooms share a common design background with a variation mostly on the used colors and textures. 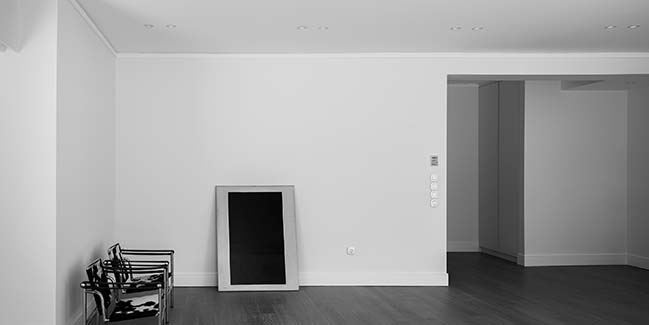 The design approach, the choices of materials, textures and color tones, are aimed in creating a balanced, luminous and pleasant atmosphere, where the overall image will also act as a canvas for the incorporation of mobile furnishings in the space. 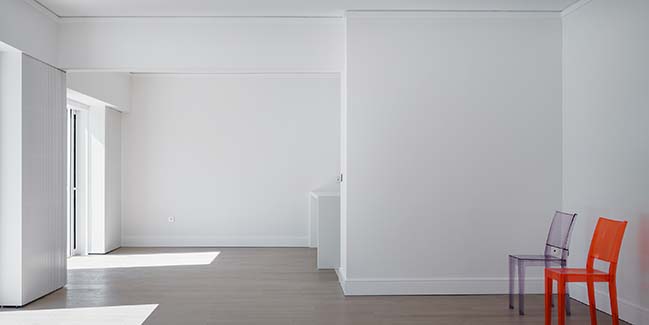 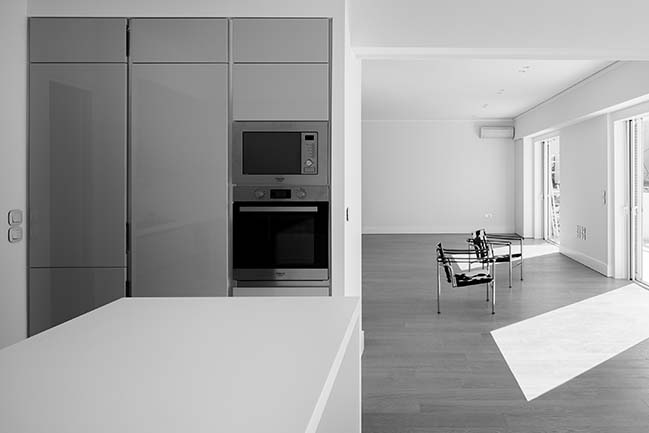 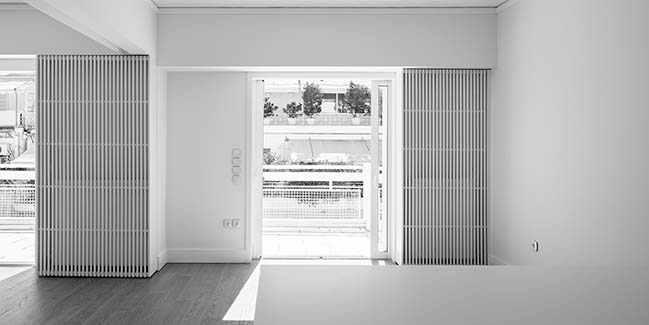 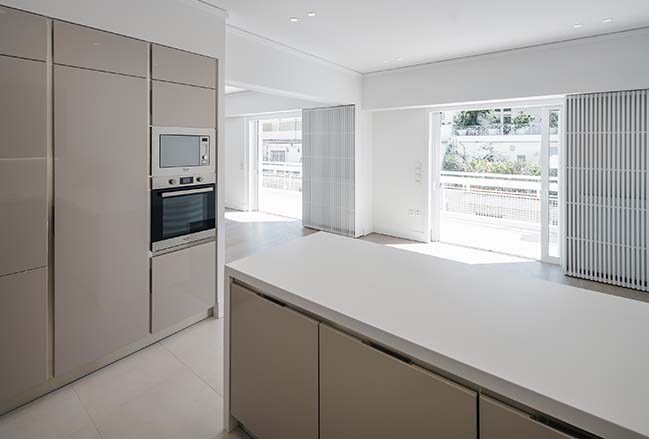 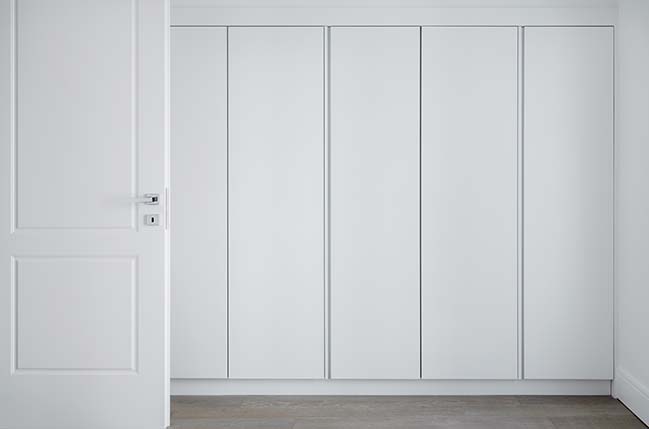 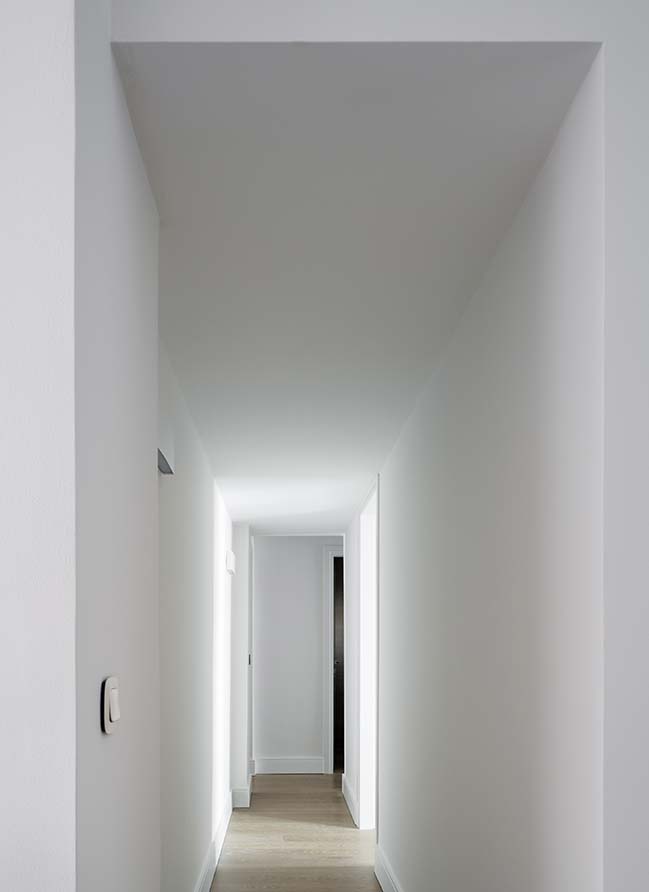 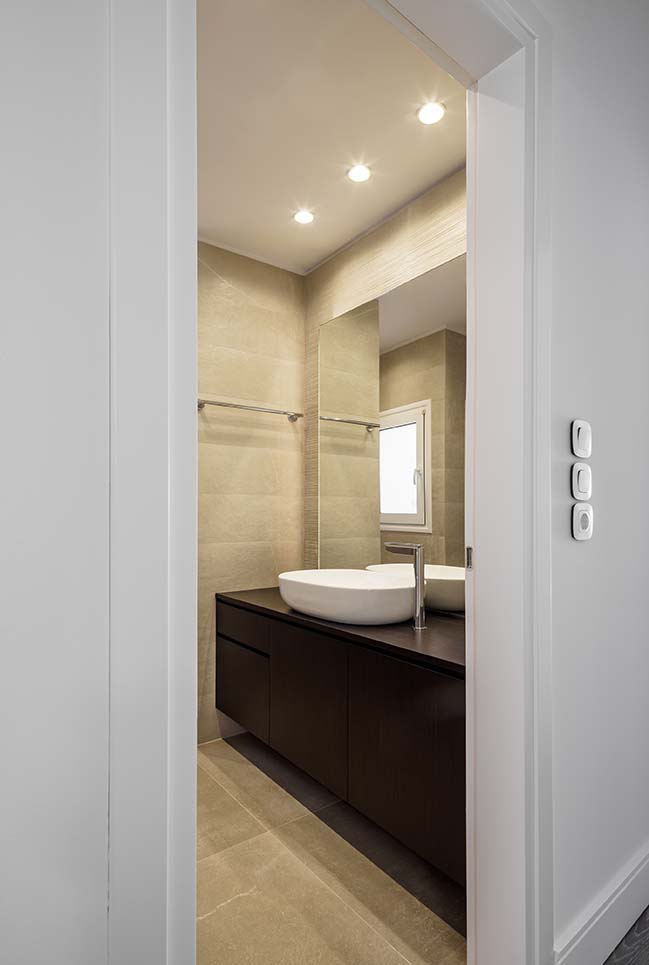 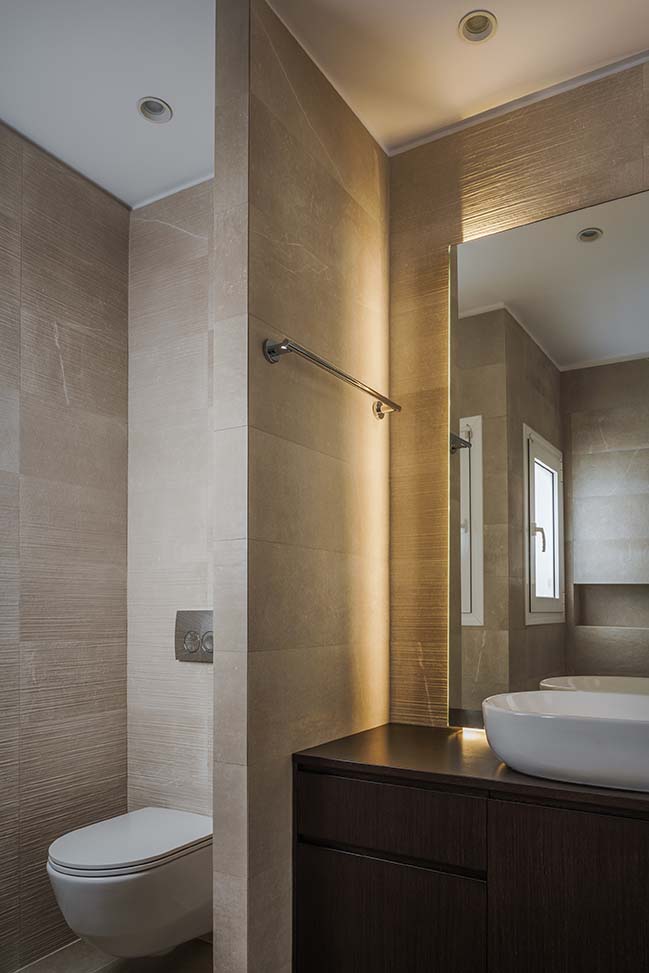 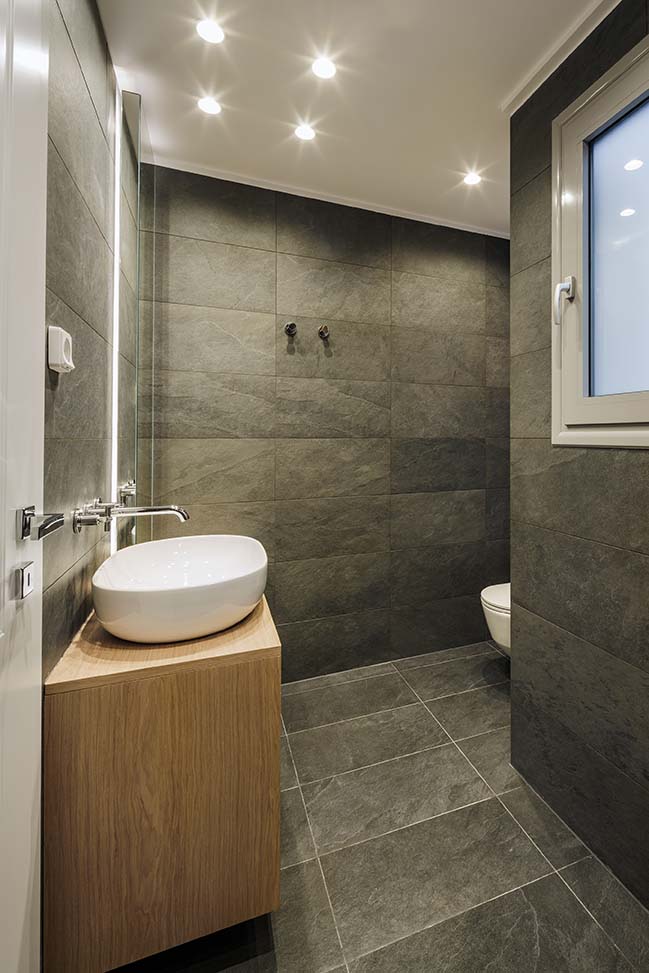 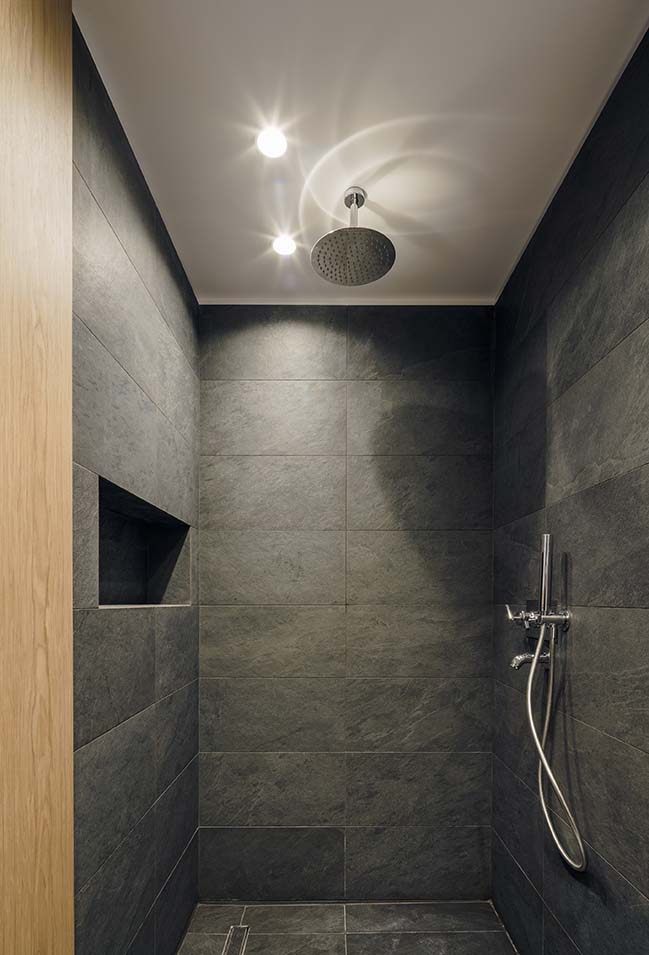 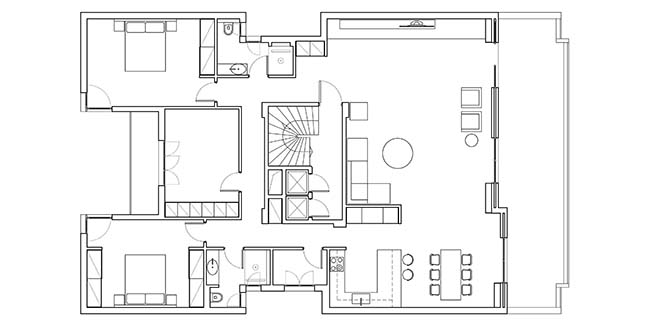 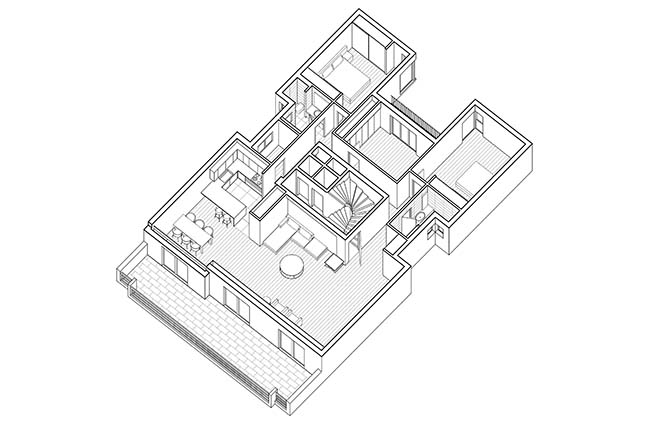 05 / 17 / 2018 The apartment occupies the overall available space on 5th floor. The building, built in the mid-60s’, is located in a walking distance to both Kolonaki and Syntagma squares 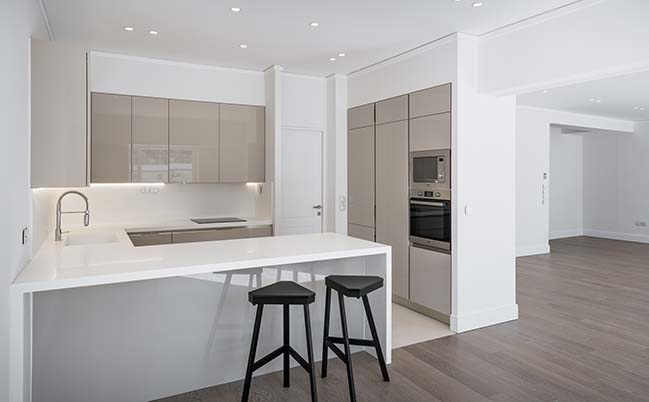