GokoStudio’s refurbishment of a small apartment in Barcelona turns it into a free-flowing home that preserves the intimacy of various spaces, almost without the need for doors. 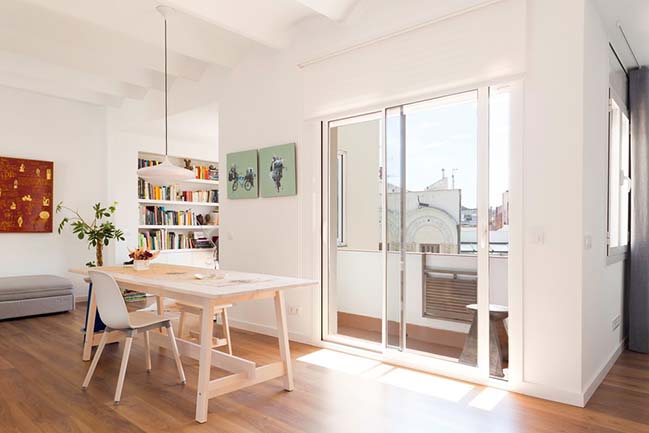 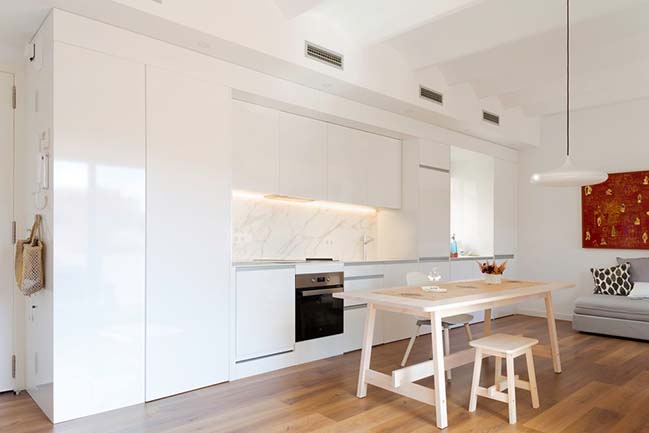 From the architect: The residence is located at the heart of the Ciutat Vella district just metres away from the former Born market, in one of Barcelona’s most fashionable neighbourhoods. From the beginning, one of the most interesting propositions was the client’s focus on what her home should be like: an open free-flowing space. 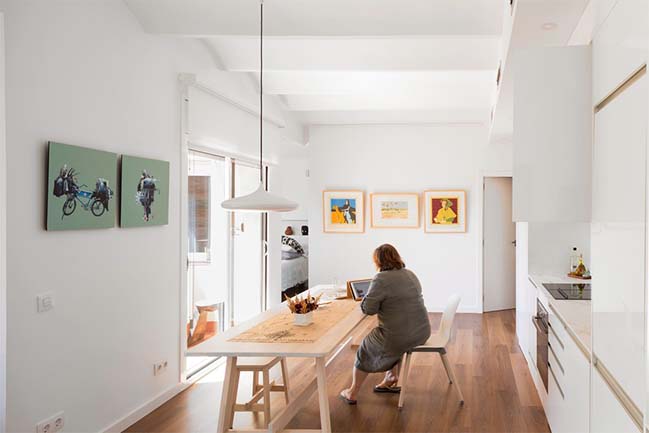 From a functional point-of-view - Functional requirements recommended the complete redefinition of the space. The owner was keen to avoid floorplans typical of conventional homes. She was looking for flexibility in the use of space. A limited surface area of 50 m2 had to become her refuge, her work area, and a place to welcome friends without that requiring areas designed exclusively for each function. A guiding principle was the creation of various areas without establishing hierarchies to prioritise their versatility and conserve the intimacy of certain areas such as the bedroom. 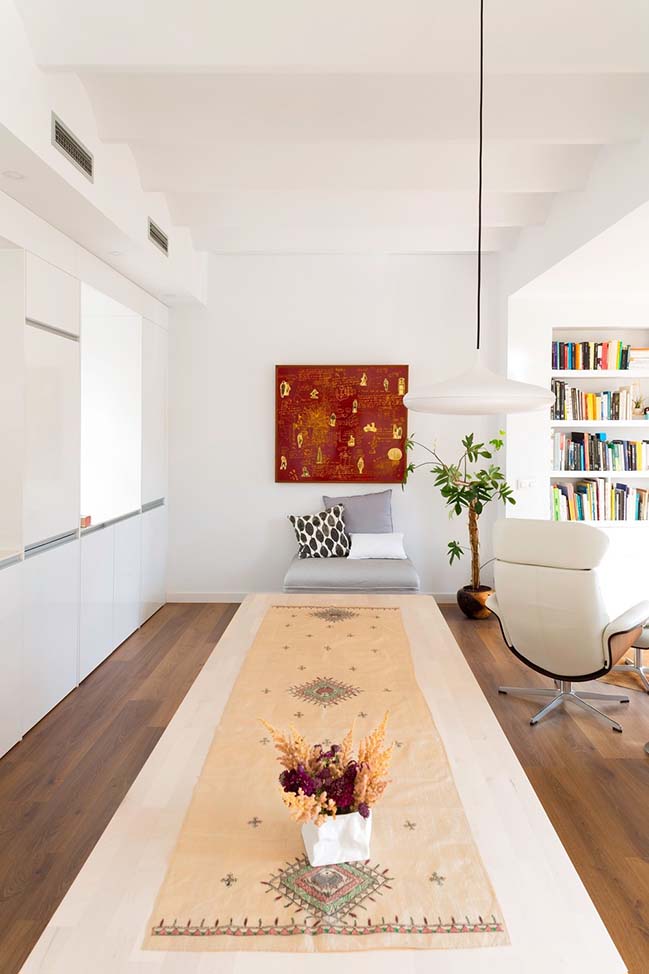 From a spatial point-of-view - As far as the owner was concerned, SPACE is the height of luxury. Space based on order and discipline, which eschews abundance and manifests itself in an exercise of distillation that places a value on emptiness as a form of spatial wealth in which people are more able to live life to the full. 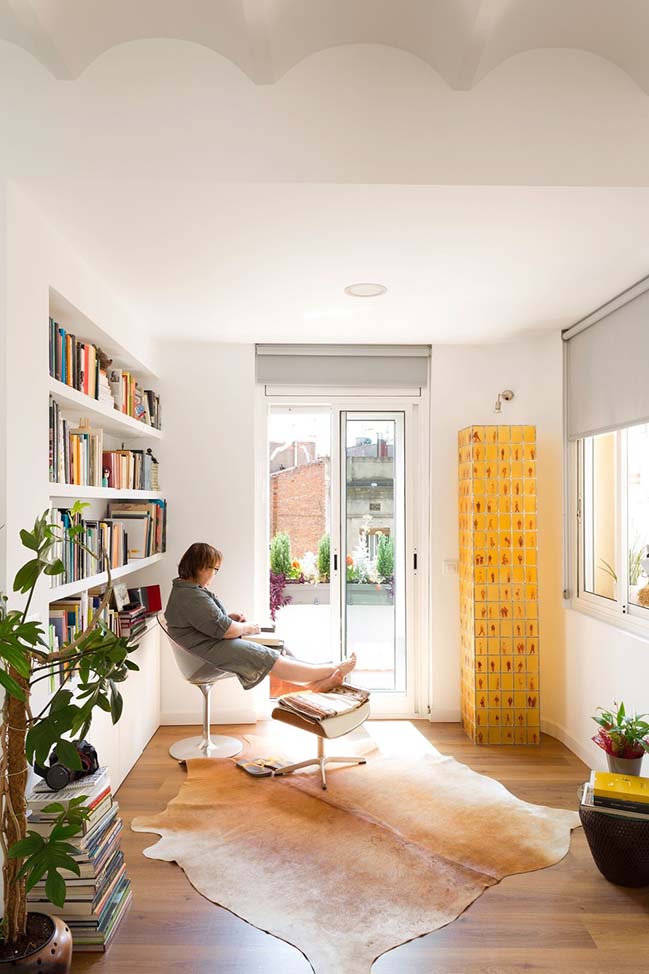 The diagnosis - It was clear from the U-shaped floorplan with its stumpy legs that the home’s outline had a huge potential: the possibility of a single free-flowing and light space with no need for physical partitions. The bends of the U inevitably reduced the sense of a ‘single space’ and endowed each sector with a ‘little intimacy’. 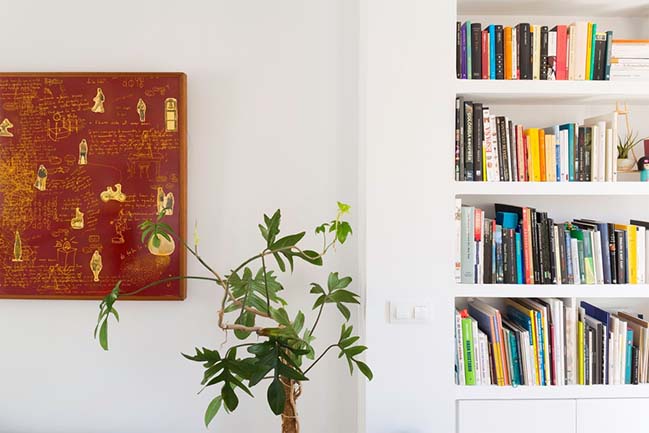 The functional and spatial proposal - On the basis of this observation, the proposal sought to respond to the following question: How can the different zones of the home be connected to achieve a single space and ensure the privacy of the night-time area? 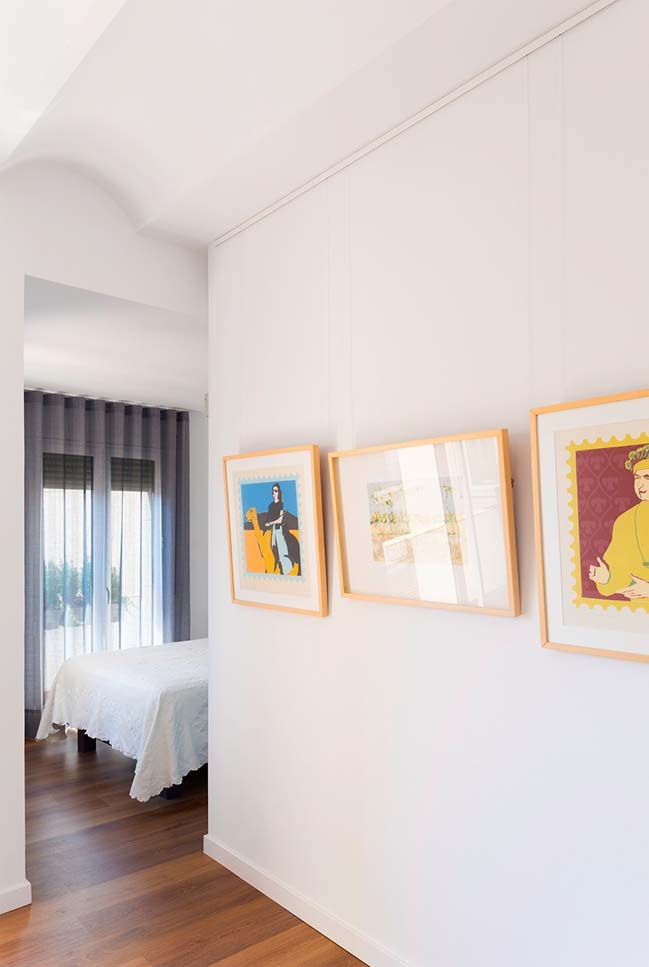 The main idea was to design a free-flowing space so that the owner could move freely around the house while guaranteeing the intimacy of the night-time area. This requirement contradicted the idea of creating a single space, but there was a solution. 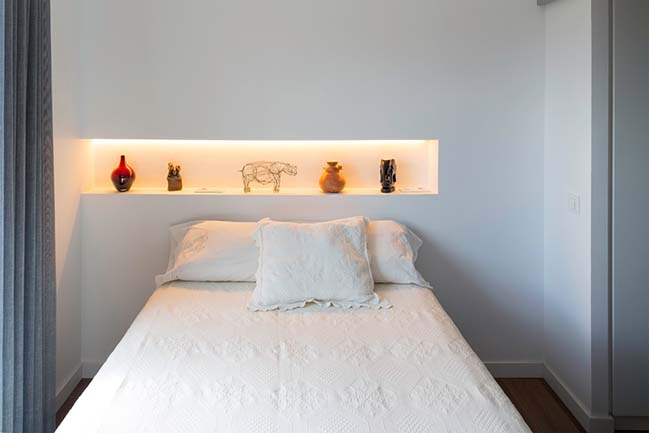 A system of consecutive interconnected spaces was proposed. The flat would be organised around a central area in which all the life of the residence would be lived. The interplay between these two juxtaposed ideas, a free-flowing space and the preservation of intimacy, was resolved with the location of the bathroom (shower-walk-in wardrobe). 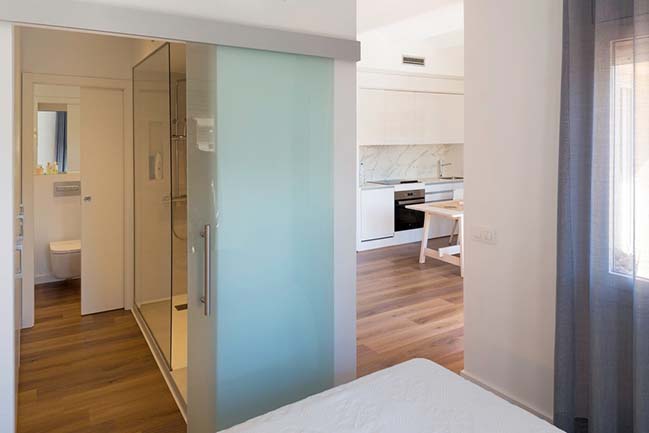 The bathroom (shower-walk-in wardrobe) hinged between the bedroom and toilet, resolves the interconnection between the social zone and the night-time zone, enabling the twofold function of the toilet (as a visitor’s toilet and en-suite bathroom). The bend in one of the U’s legs ensures the intimacy of the bedroom without the need for a door. 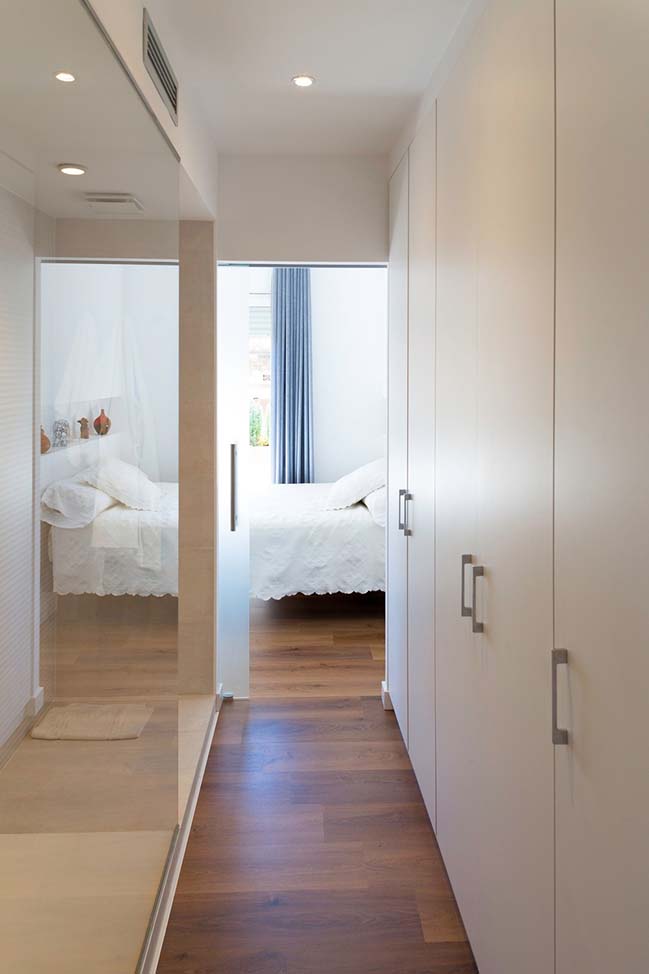 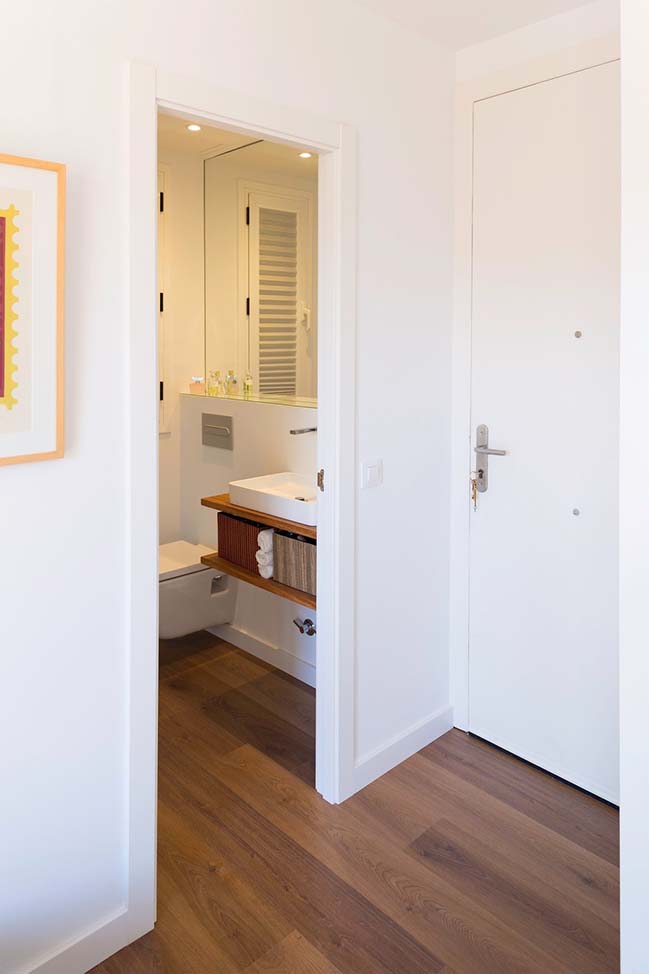 In order to obtain as large an interior space as possible, the kitchen was designed lineally and equipped with a lot of storage capacity (5 metres in length) with two large gaps along the way: a horizontal one for the countertop, sink and cooker, and a vertical one framing the window onto the interior courtyard. One of the kitchen cabinet doors provides access to a laundry room. 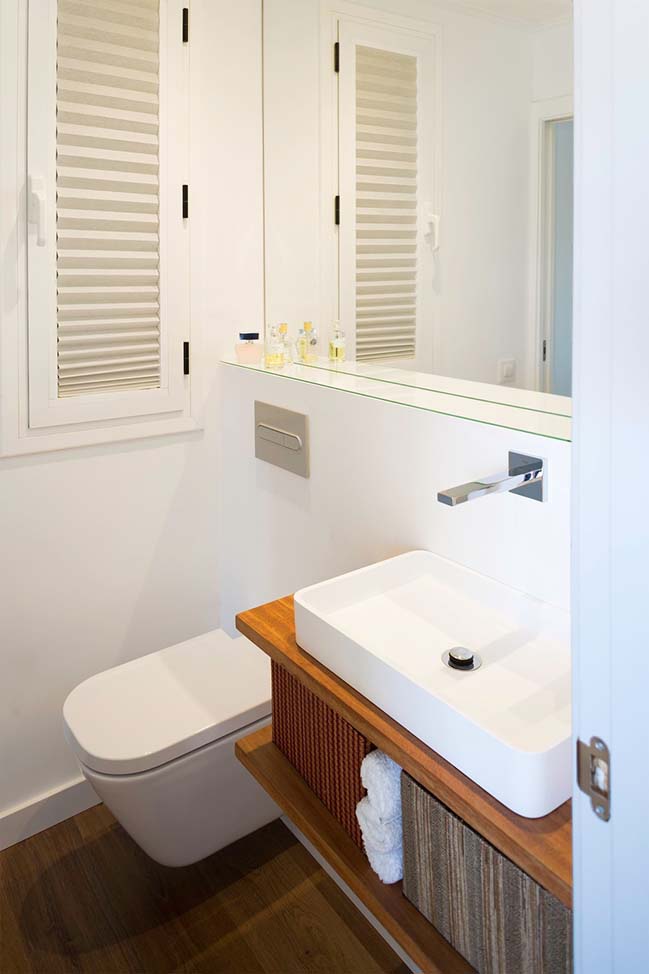 The use of colour also contributes to setting the scene. The spatial unity was enhanced with wooden flooring. The walls and ceiling constitute a white canvas backing for several pre-Columbian artefacts and works of art, which break up the rigidity of the home and provide Casa Born with personality.

The project overcame existing limitations to reveal the soul of the space and respond to the aspirations of its inhabitant in the best way possible. 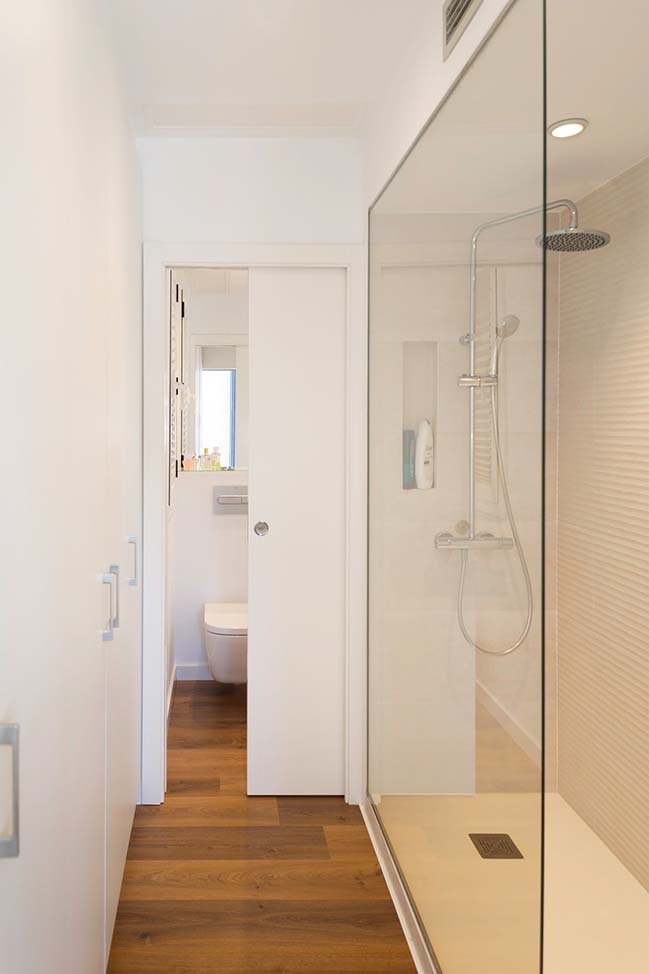 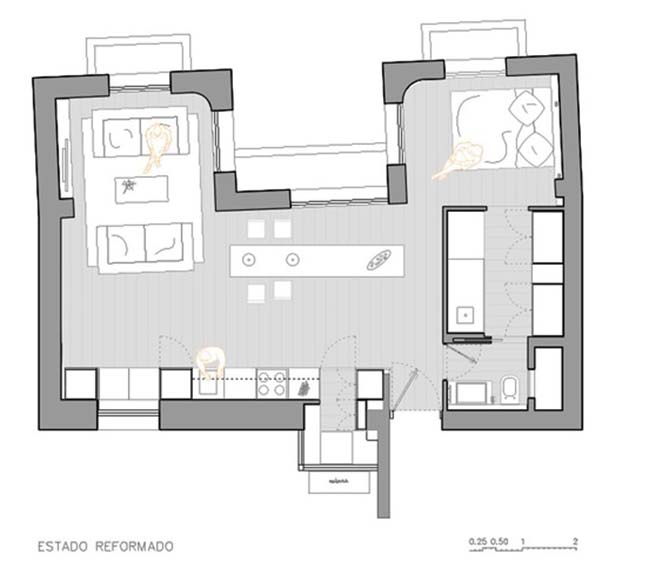 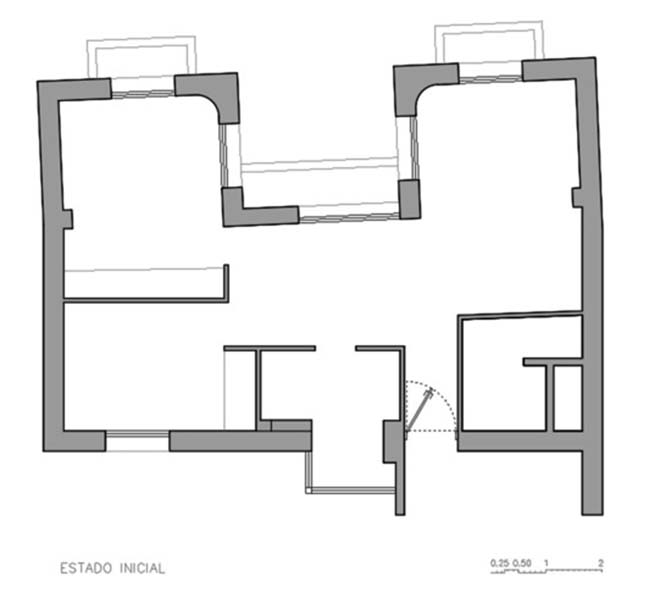 05 / 13 / 2018 GokoStudio’s refurbishment of a small apartment in Barcelona turns it into a free-flowing home that preserves the intimacy of various spaces, almost without the need for doors

Recommended post: Bedroom idea inspired by the Garden of Eden