This is a project to refurbish a small, 46 square metre apartment for Jaime, an ER doctor, and Albóndiga, his bulldog.

From the architect: Although the original apartment had a double east-west orientation, most of the cross-ventilation was blocked by several interior walls, which meant that the distribution did not adequately respond to Madrid’s high temperatures in summer. This was a key aspect to consider in the new design, for both Jaime and Albóndiga. As bulldogs are a delicate breed, they are especially sensitive to heat. This was why the interior was redistributed to create a kitchen-living-dining room that is open to the east as well as the west, allowing the air to circulate. 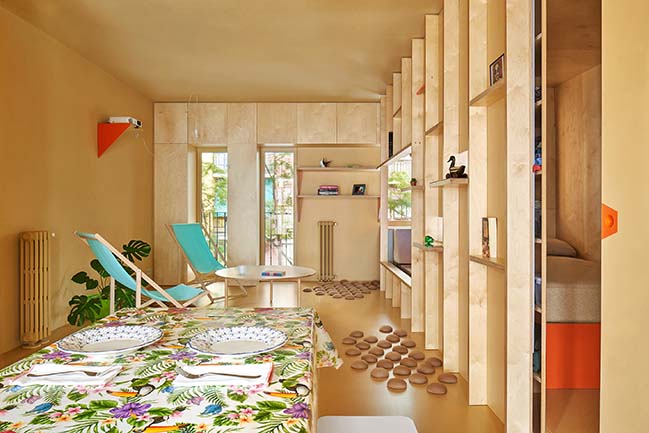 One important aspect of the apartment’s passive cooling design is a vertical edible garden on the west-facing balcony. The vegetation helps prevent the home from overheating in summer and generally functions as a thermal cushion, cooling the interior and avoiding the use of air conditioning. Madrid and its surrounding area suffer from a serious lack of water, which is progressively worsening as temperatures rise, so with the help of agronomists and programmers, we designed a system to recycle grey water from the shower to irrigate tomatoes, herbs and other plants in the vegetable garden. It is worth bearing in mind that over the course of this century, 80% of Spain will be at risk of desertification, and large Spanish cities put enormous pressure on regional water sources. 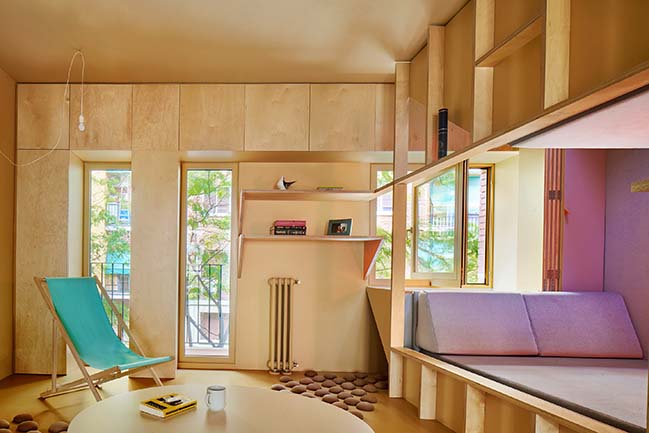 Along the balcony, on the inside, a microlandscape of tubes and filters has been created leading from the shower, which makes the flow of water visible in a didactic way. This microlandscape is a prototype of possible alternative objects of desire for a new, hypothetical, sustainable era, a microlandscape that could be replicated in many other homes. 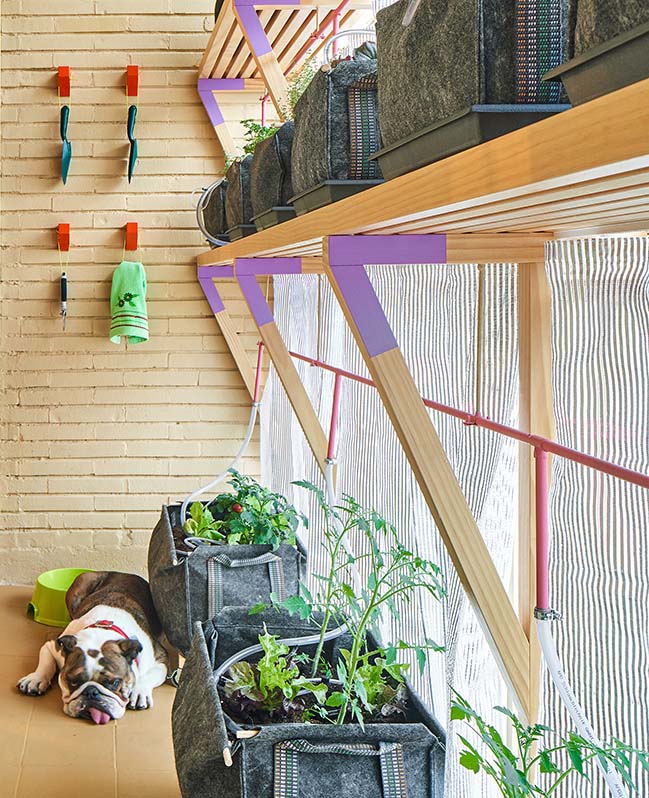 Since Jaime’s work hours are very variable, he catches up on sleep after night shifts by taking long naps during the day. Therefore, instead of focusing on the bedroom as the only place to rest, we created a capsule-periscope for taking siestas in the living room as an alternative to the bedroom. Furthermore, it serves to receive intimate friends. In the case of occasional encounters, the living room is frequently a central place in gay sexual culture in Madrid, often reserving the bedroom for closer relationships. The siesta capsule can also be converted into a guest room, obviating the need for opening out a sofabed in the living room, which would take up a lot of space. It can also be a place to watch films, by sliding down a compartment that serves as a projection screen, or a periscope window offering natural light and a view of the tree-lined street outside, allowing Jaime to read with his back to the window while being able to look outside through a series of mirrors. 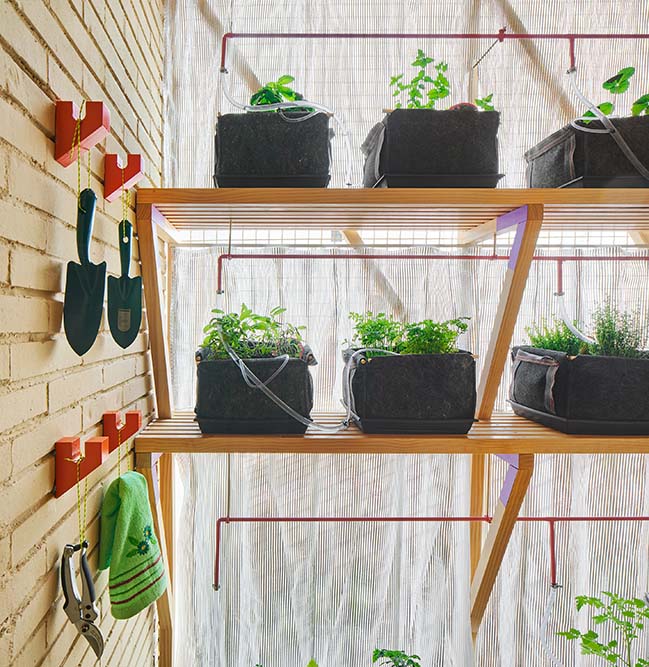 The capsule is part of a 1.5 m wide strip, in which a dressing-room, a store room and the main bedroom for sleeping in at night are situated. As well as benefiting from natural cooling, Albóndiga has a number of cotton islands that we designed for him to rest on. These soft hemispheres have a cooling effect, since they allow the air to circulate between them; they are fixed to the floor with suction cups, which means they can be repositioned at any time. 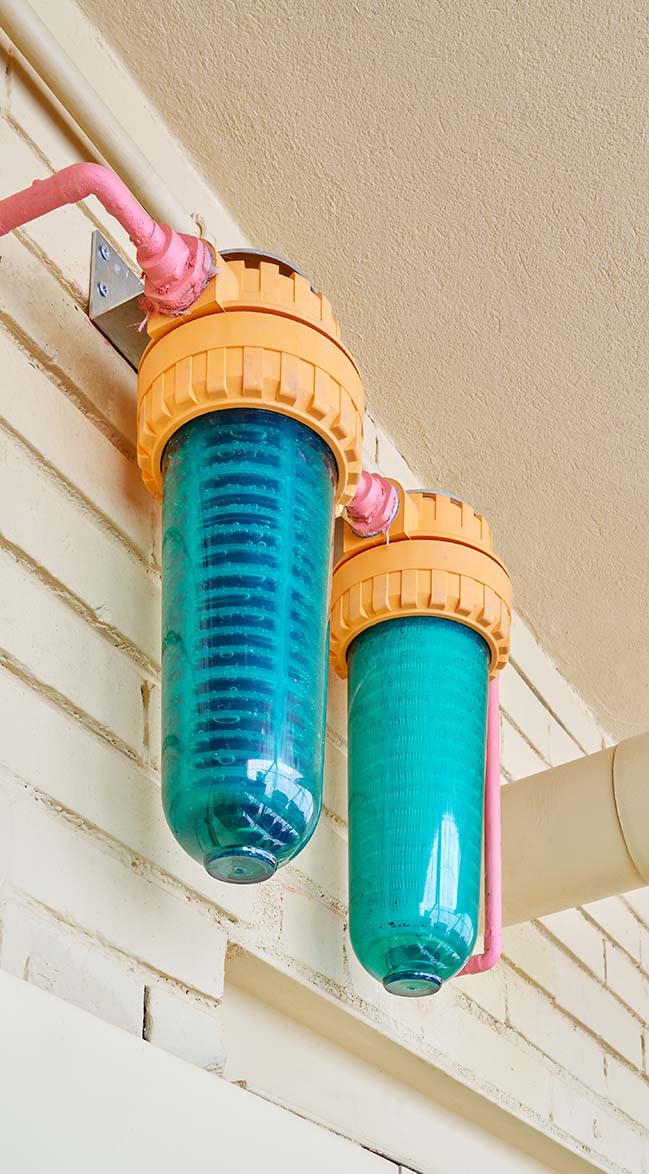 This home is set in a modern, 1960s version of a ‘corrala’, a traditional Spanish building typology in which apartments are arranged around a central patio. In this type of structure, dwellings are accessed through an open-sided corridor that makes it easy for neighbours to interact with one another, for example when hanging out laundry, a very widespread phenomenon in Madrid as well as in other parts of Spain. However, in this case the central patio is occupied by commercial premises, which weakens the communal ambience that is typical of this kind of building. In traditional ‘corralas’, the patio is a very important space that encourages exchange between neighbours. 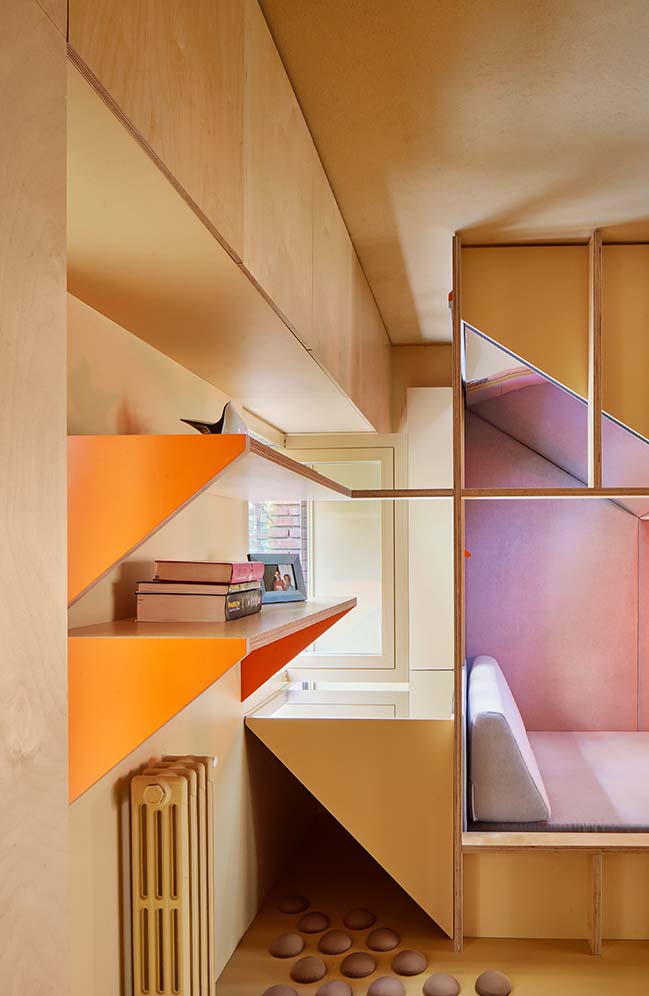 As part of this project we examined the socialising nature of traditional ‘corralas’ in Madrid, not in terms of the design at a building scale, but through interior design and garden design: we foresee that there will be some excess produce from the tomato plants, herbs and other species growing in the new domestic vegetable garden which Jaime will not be able to consume by himself. Thus he has the option of sharing this produce with others, whether neighbours in the same building, work colleagues, or loved ones. In this way the vegetable garden provides food as well as potentially widening the relational capacities of the home, questioning the prevalent notion of the modern apartment as an isolated living hub.

In this project we have therefore explored new socio- and bioclimatic possibilities in the home space around other, post-heteronormative masculinities and expanded forms of community. 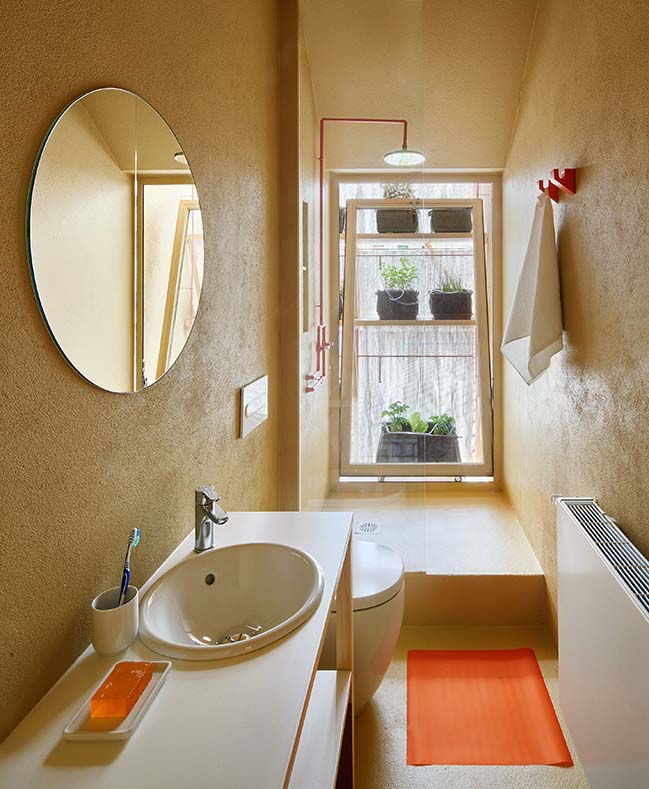 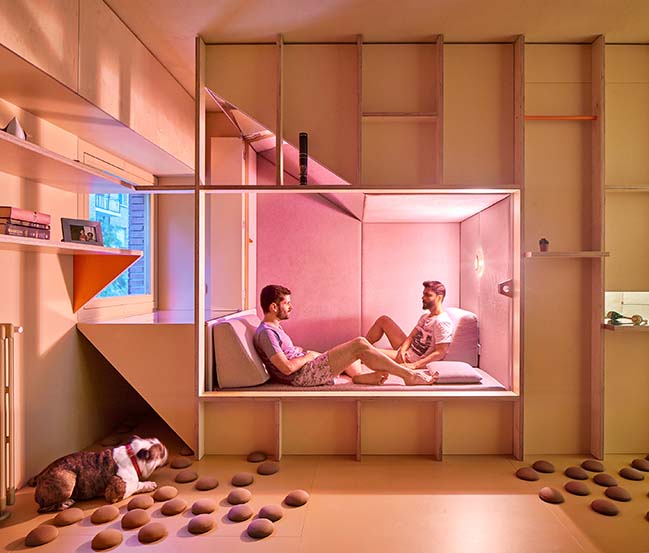 YOU MAY ALSO LIKE:
> The Dog House in Beijing by Atelier About Architecture
> 46sqm studio apartment in Poblenou by Egue y Seta 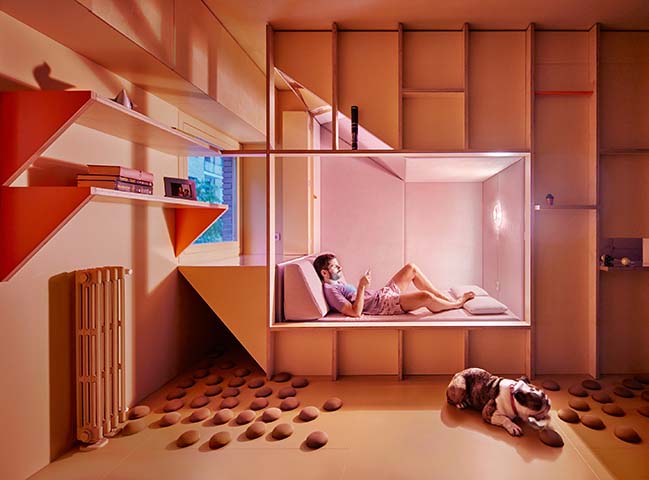 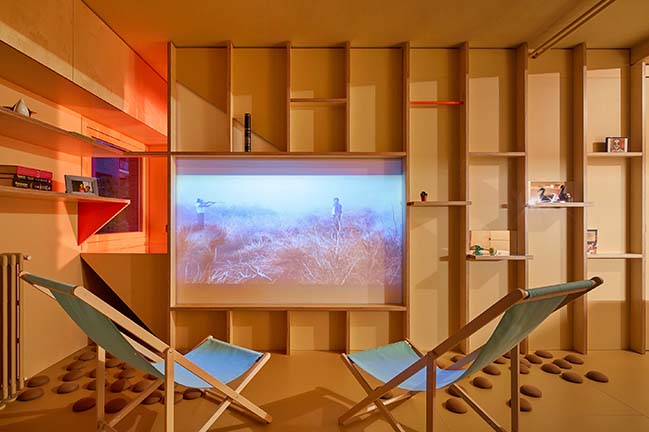 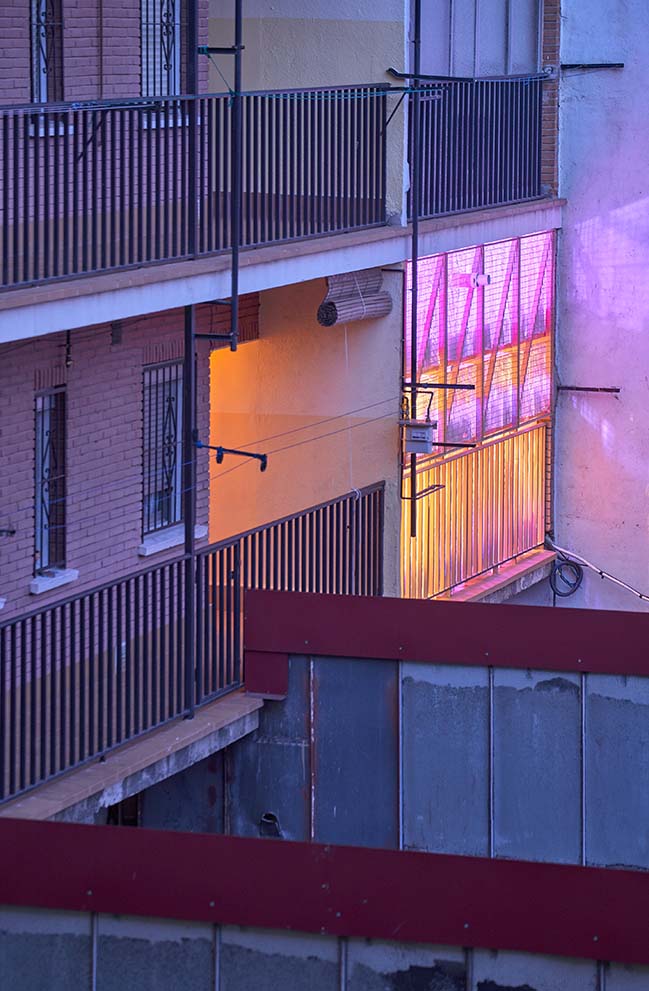 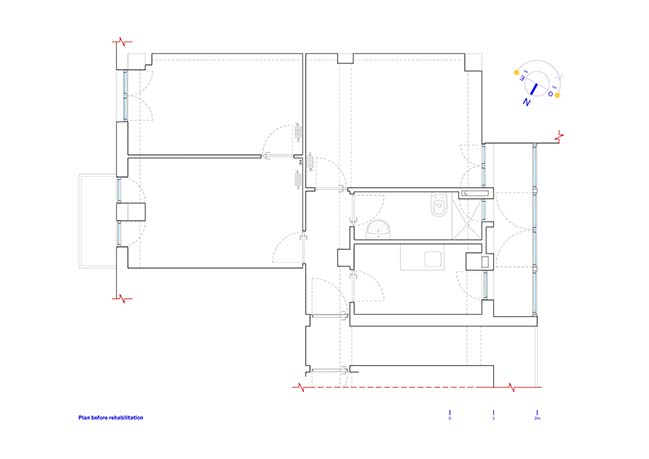 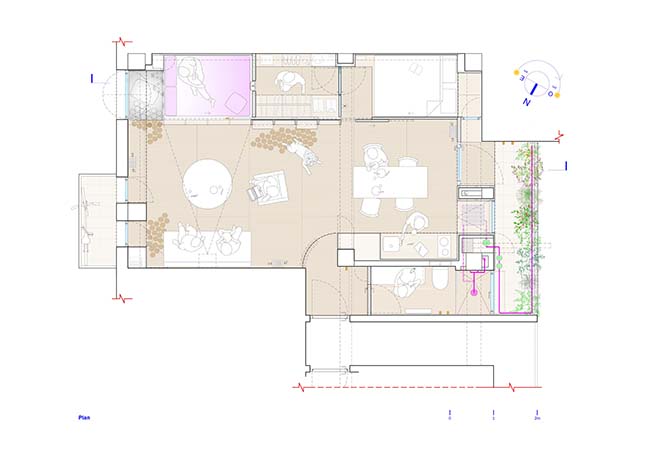 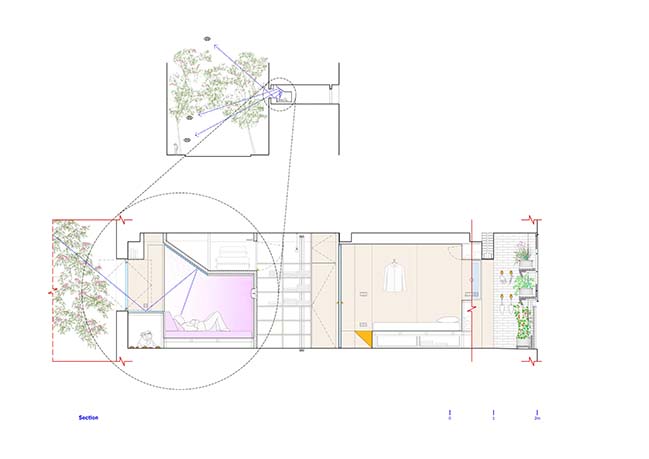 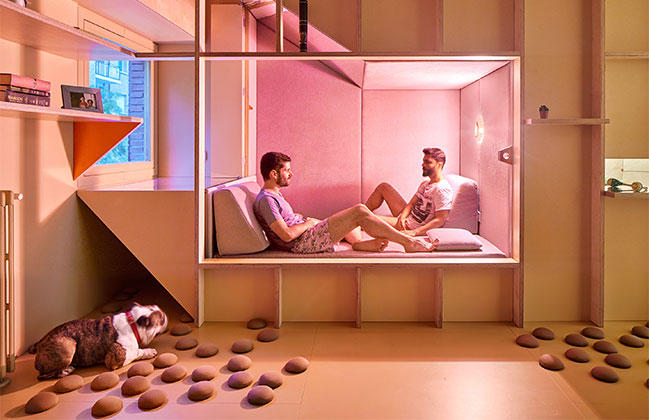