Y House is a futuristic house concept by MVRDV to create a unique private house with a special Y-shaped structure with a rooftop swimming pool in the dip of the Y-shape. 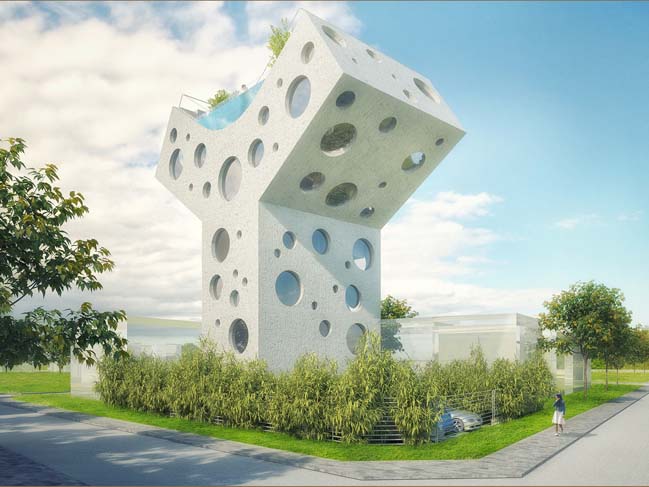 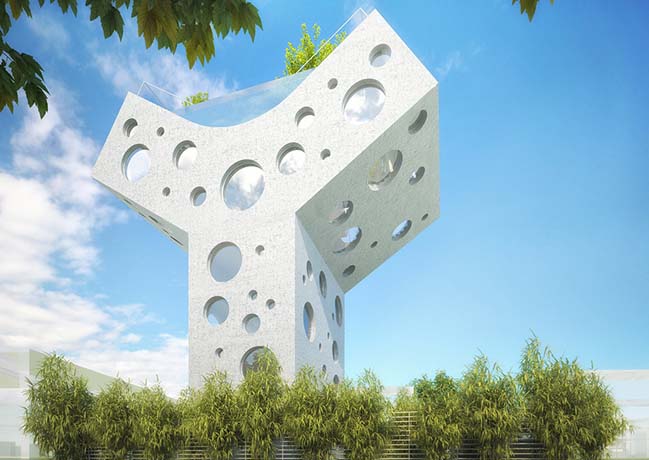 Project description: Y house is a single family residence for those wishing to spend their weekends in this futuristic space, on the top of Y-shaped floors and who enjoy cooking in the open kitchen. The villa’s living space is on a semi-floating deck with seats forming part of a sloped wall that also integrates a bookshelf. A special attraction is the swimming pool on the roof cradled in the hollow of the Y. The site of the project is an approximate 40-minute drive between Tainan city and the sea. 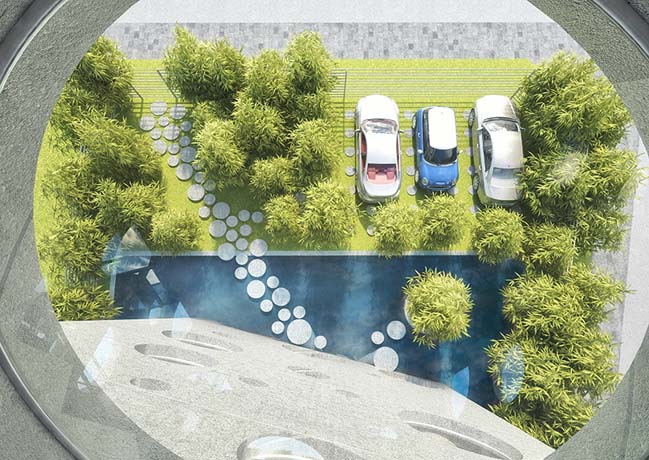 MVRDV’s design of the villa derives from the optimum volume for the house but then raises the living spaces to give residents prime views over the surrounding landscape, rather than their next-door neighbour’s fence. The more communal spaces of the house – the living and dining rooms – are given priority in the top of the volume, which is bent into a ‘Y’ to form the private swimming pool. Below this, bedrooms including; two children’s rooms, a master bedroom and a guest bedroom, are stacked above a ground-level garden tea room meant for entertaining guests. Both stairs and a lift give access throughout the house. 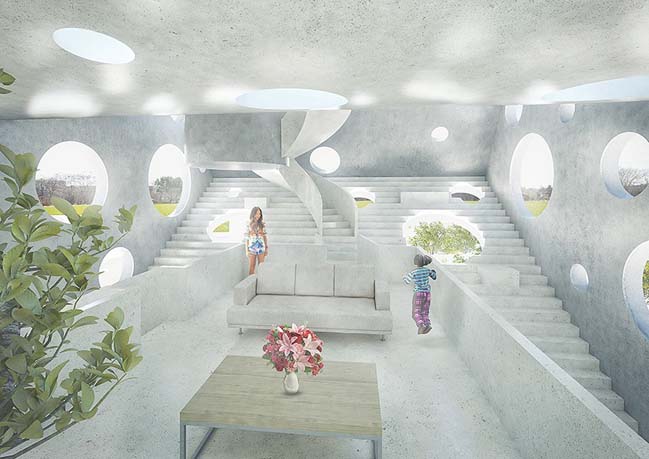 This 330m2 villa looks out onto its surroundings with living spaces raised up on a four-floor stem. On the rooftop is a private swimming pool that takes the building’s prime location, cradled in the dip of the Y-shaped structure. The villa sits within a tranquil pool with small gardens and stepping-stone pathways, the positioning and orientation of which is all arranged according to the practice of Feng Shui. Large, circular windows puncture the concrete shell of the building giving light and airy interiors without interrupting the Y shape of the villa. 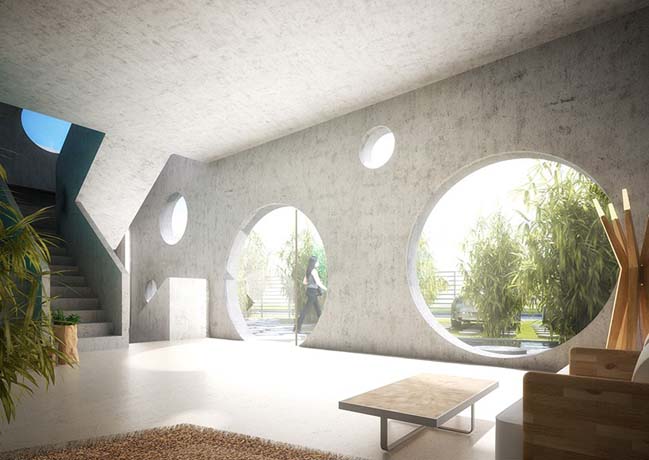 In the top volume, the dining space is sandwiched between two tribunes which not only provide access to the solarium and changing rooms before leading up to the rooftop pool, but gives extra storage and spaces on which to relax. Even here windows are cut, looking both down into the calm pool below and up into the one above; letting the dappled light shine into the living room floating above the dining area. 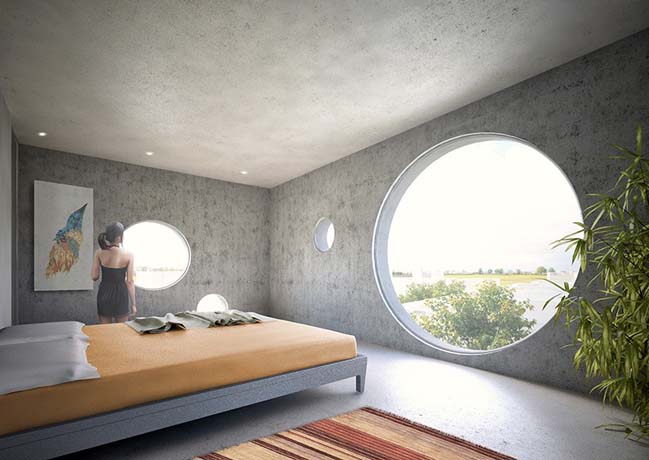 “How to make a house that literally rises above the ‘sea’ of houses? How to create a view towards the sea over the other houses?” says MVRDV co-founder Winy Maas. “By making the program downstairs as narrow as possible, a large garden is created and situating the majority on the top floors a view is created. And in the heart of the elevated house, the rooms diverge/move apart to give space for a valley to swim in with a view towards the sea…” 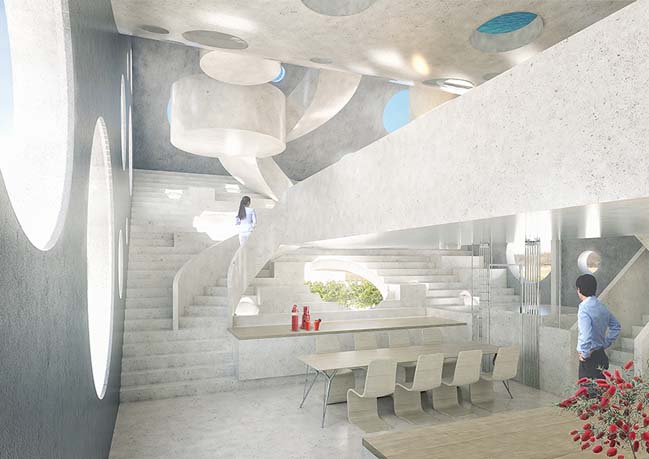 Y House is MVRDV’s second project for realisation in Tainan after winning the competition to transform the T-Axis in downtown Tainan with The Urbanist Collaborative and LLJ Architects. This transformation of the T-axis is aimed at reconnecting the city with nature and its waterfront, by creating a lagoon on the site of the former China-Town Mall and a green corridor with public interventions along Haian Road. 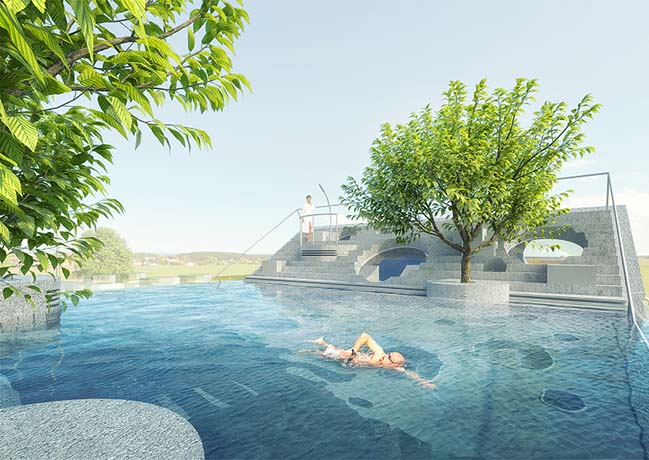 Y House was conceived by MVRDV working with co-architects KAI Architects, Taiwan and in collaboration with Envision Engineering Consultants, Taipei/Tainan, Taiwan. A landmark in and of itself, the Y House’s distinct concrete façade with circular window openings creates a light-filled experience. Its furniture is fully integrated into interior spaces i.e. stairs merging with living deck, and a concrete roof evoking sculptural elements. 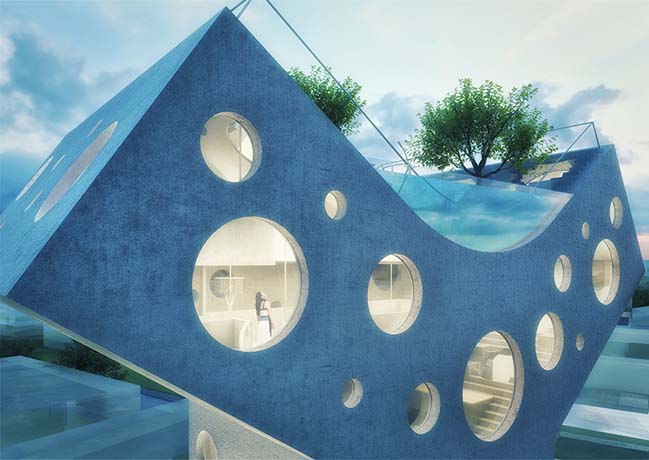