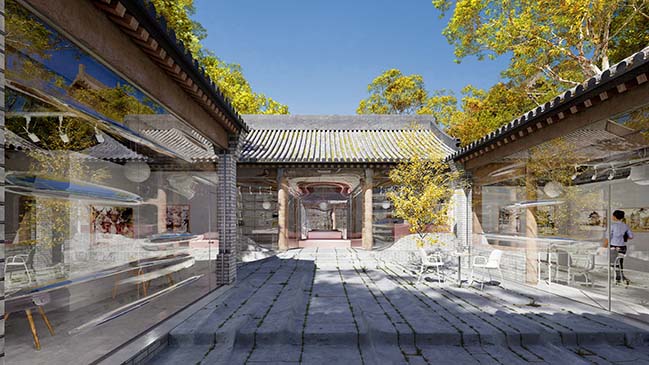 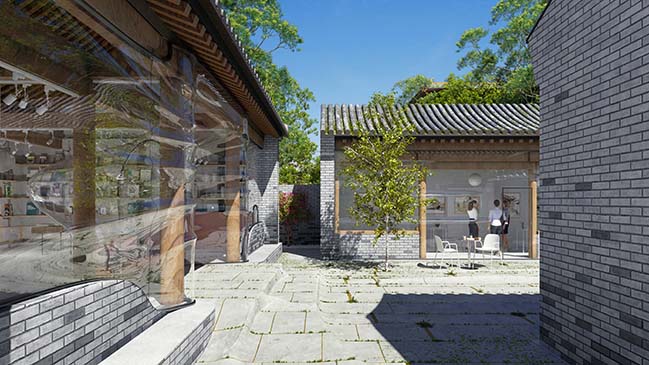 From the architect: Hutong, poses the question of how we can reinstate a discourse on the reinvigoration of ancient city spaces. We avoided inserting intrusive programs into the courtyard house, deflected from the idea of merely switching out old doors and windows, and refrained ourselves from the plagiary of a faux-Wabi-Sabi-esque atmosphere that is in fashion amongst the Chinese bourgeoisie. We challenged ourselves to look for new perspectives apart from the banal and overused stylistics and tastes. 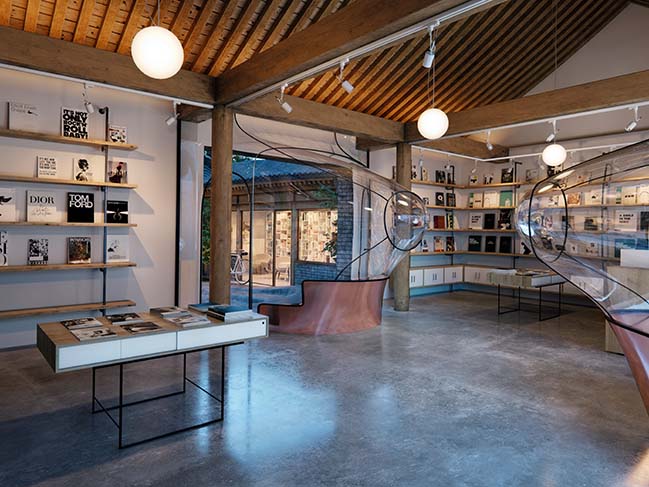 In actuality, urban renewal is not a solely aesthetic issue. What it needs is the renewal of spatial relationships to revive and attract new human usage. This project was faced with hindrance from multiple parties, complicated and layered bureaucracies presented arduous limitations to the design. 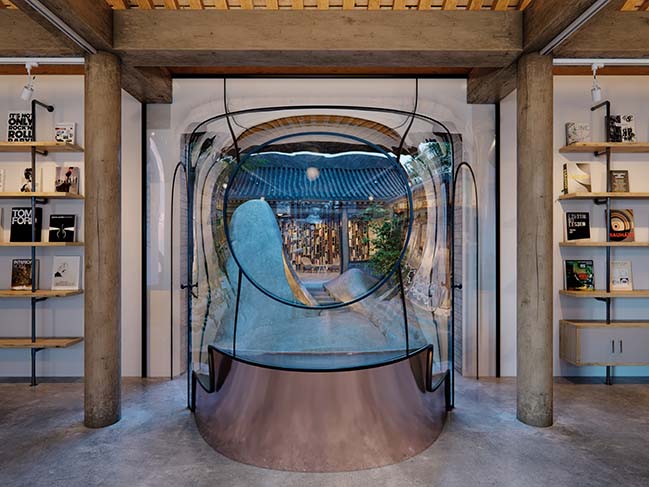 The site is located near Nanluoguxiang, one of Beijing's most controversial hutong-renewal district, manufactured and polished to resemble a nostalgic hutong lifestyle. The site sits on the banks of a historic river that connected to the imperial moat, carrying shipments into the palace daily. However, due to careless planning, the river has dried up over a century ago. Nowadays, only the structural brickwork of the embankment from Ming and Qing dynasties remains. The clients secured management rights from the government, hoping to transform the site into a lively public space. New amenities such as a coffee shop, a renewed museum and bookstore was to be inserted into the courtyards. 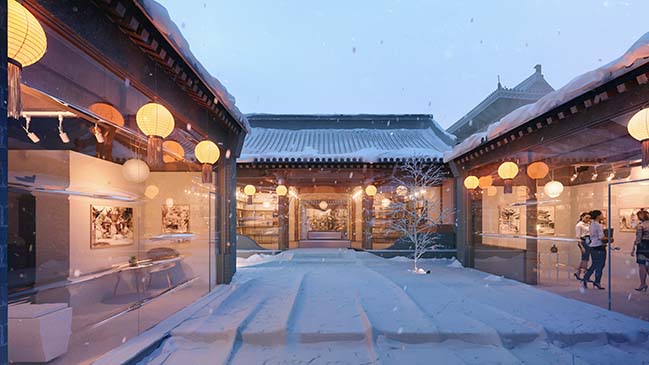 The existing building was of historic preservation status, the original facades, timber structure and brickwork was not to be touched at all. The original "museum" courtyards are located centrally in the ancient city of Beijing, constrained by its rigid and hierarchal spatial structure, it never truly fulfilled its purpose as a public institution. The impact of the historical ruins of Yu-River adjacent to the courtyards was never quite established. In fact, there are many large museum courtyards in Beijing that are unable to be fully opened to the public due to elaborate bureaucratic reasons. 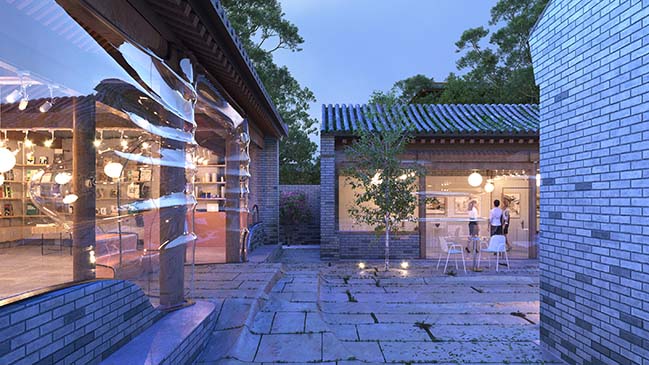 Temporary Interference:
We wrapped the courtyard with a transparent, invisibility cloak-like glass skin. The two courtyards are now connected optically. This glass cloak layer preserves the building in its original state (we realized we have no rights to alter a historical courtyard). With just one administrative order, the glass cloak can be removed without a trace, returning the courtyard to its former state.

A force field is created between the once separated courtyards. The magnetism of the force field creates a vibrating fluctuation of the environments of the whole site, pulling energies from the river inward. An invisible and ethereal force destabilizes the spatial and visual flow all over the site. 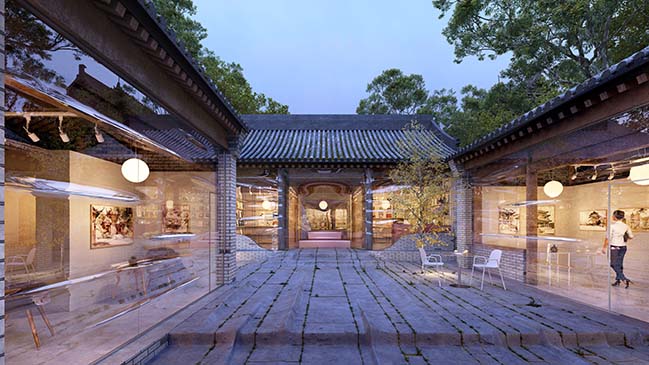 Not quite transparent:
On first glance, the front and back courtyard look as though completely open to one another. However, under the reflection and refraction of light on the wrinkles and undulation of the glass cloak facade, imagery becomes blurry and ambiguous. Reality is altered, the apparent transparency of glass is subverted , the perception of a poetic space is only illusory. 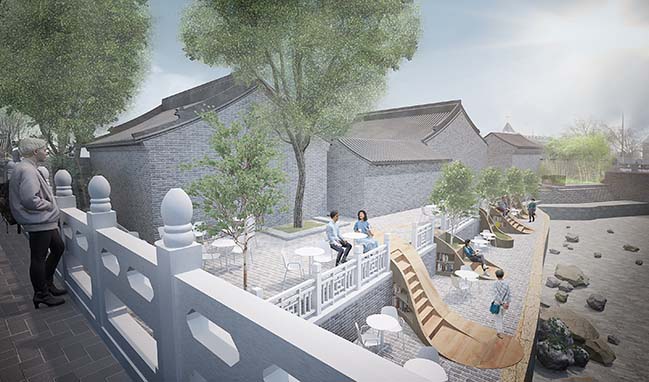 Spatialization of the skin:
The brutal winters of the Chinese North informed the traditional entrance foyer in Northern Chinese residences (cross- ventilation is prohibited architecturally). The concave bowl on the axis of the force field is spatialized on the glass cloak facade, forming a ceremonial entrance as well as a foyer adhering to tradition. Inside the main building, two massive glass optical instruments divide the space into a reception area and reading area. Looking out from the two dioramic lenses, an ancient way of living that is so closely tied to the architecture of the courtyard house presents itself, an image that is not of the past nor the future, a simulacrum that is not of reality nor fantasy. 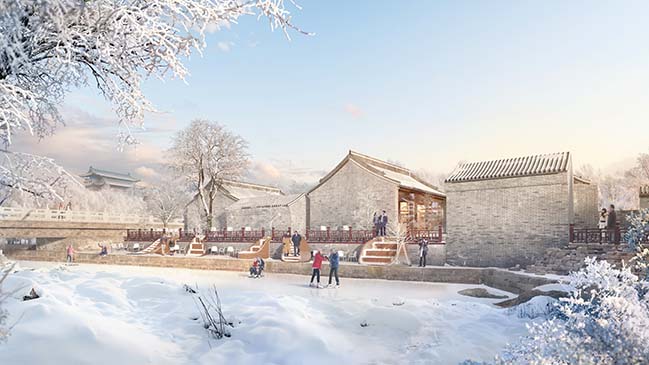 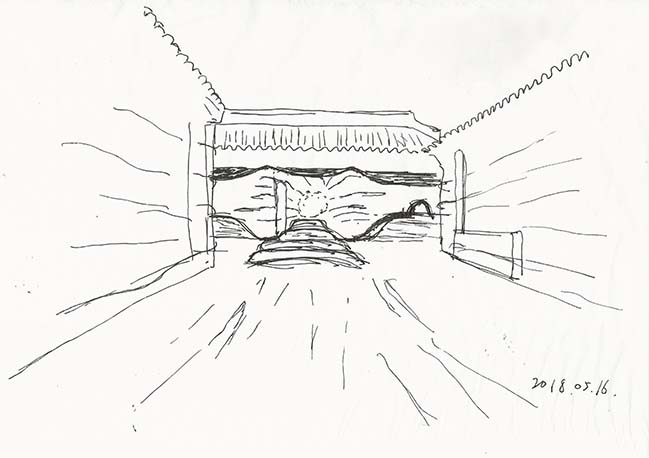 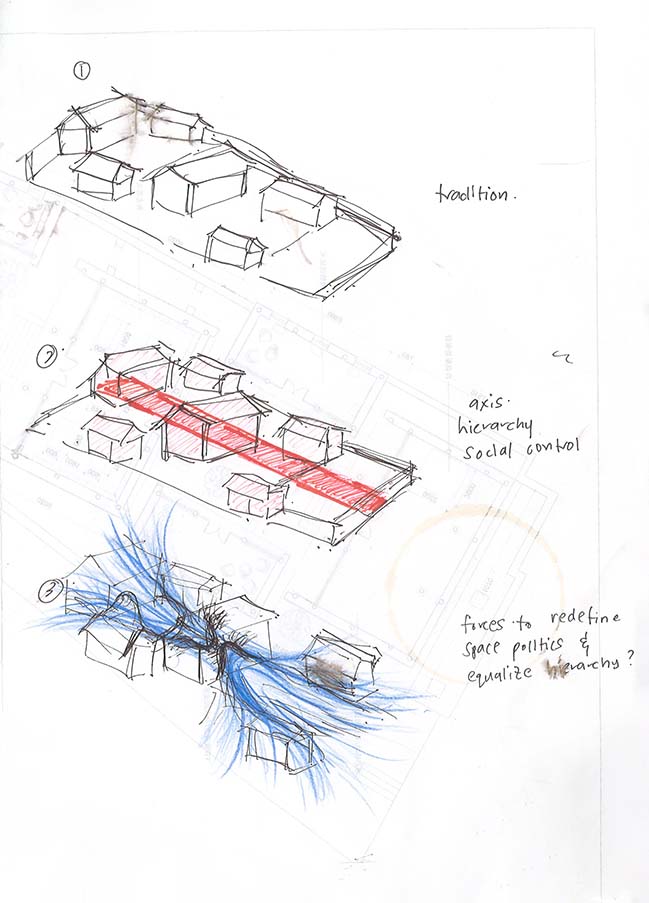 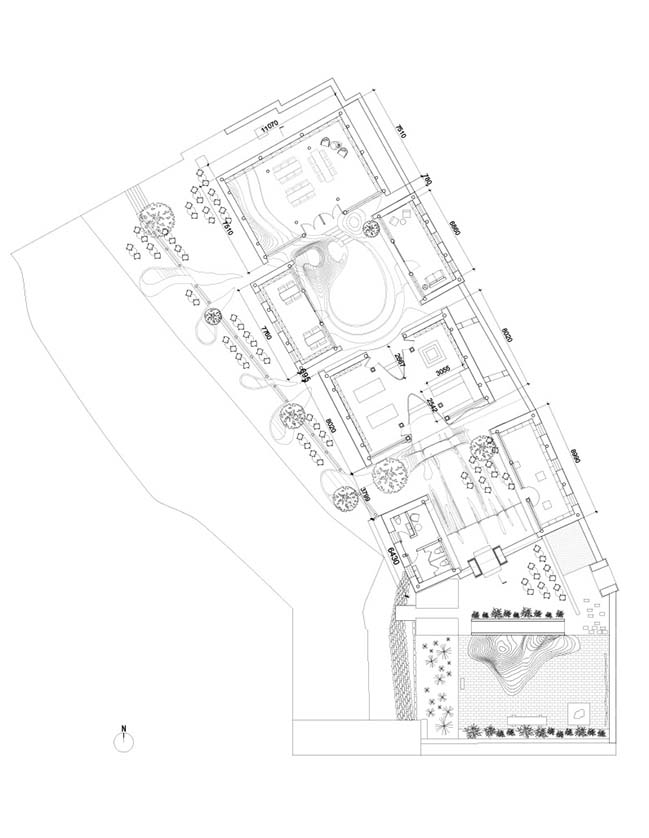 09 / 11 / 2019 Hutong, poses the question of how we can reinstate a discourse on the reinvigoration of ancient city spaces...